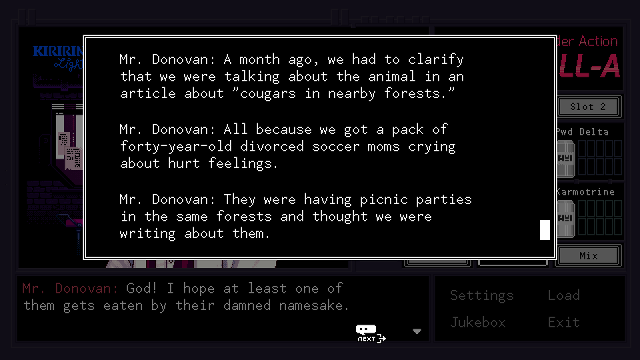 On one level, yes, this ‘is’ VA-11 Hall-A. Drinks are mixed, and lives are changed, as they say. Ludically, those are the atomic components: you read text, you make drinks, and you occasionally do temporary other stuff. Like shopping, or hosting a Christmas party.

On another level, this description is wholly inaccurate.

Maybe I should just tell you what I think of VA-11 Hall-A? Yeah, let’s do that. There’s a few layers to this onion.

If you look at VA-11 Hall-A strictly from the perspective of a visual novel, it’s good. I know I was goofing on the Steam tags earlier, but VA-11 Hall-A really is a visual novel at heart. And it’s a good one. It’s filled to the brim with clever character-driven writing and interesting world-building — sometimes overt world-building, like Mega Santa, but oftentimes subtle world-building that emerges from the characters and their actions. VA-11 Hall-A is good at this. Narrative character arcs of different sizes and intensities are continually introduced, ran, and resolved. Often in tandem, and overlapping one another. One short bit at the start introduces the idea Ingram McDougal hires an escort once every year to pretend to be his daughter… and then later introduces Dorothy, the android sex worker, who tells you that one guy hires her once a year to look and act like his daughter, who died earlier. And just like that, we get more insight into both characters and the world surrounding Glitch City.

I’m not trying to present this as some major innovation, obviously; following multiple overlapping character arcs is something that television shows have been doing for years and good books for centuries. But it’s rare to see this in visual novels, as most of those tend to focus on the main ‘viewpoint’ character(s), and treat everyone else as side stories — their lives are only important if and when they directly overlap with the main plot.

In VA-11 Hall-A, it makes sense to quickly swap in and out of different character stories that don’t revolve around ‘you’. Because you’re the bartender. Bartending provides the perfect framing: you talk to customers as they come in, get engaged in what they’re doing (as long as it also involves ordering drinks), and then put them on the mental backburner when they leave. It works. 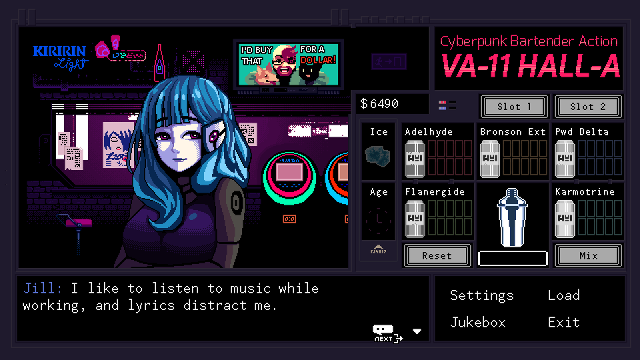 See? Just some small talk about music, as you’d expect a bartender to engage in. Nothing strange or unusual here.

But don’t mistake this for ‘simply’ a revolving cast of unconnected characters that come in to babble at you. VA-11 Hall-A is cleverer than that. For one, it’s not always a one-at-a-time deal: some characters come in together, or stick together, or run into each other. Some characters reference each other, as with the aforementioned daughter thing. This slowly builds a larger and larger sense of world and connection, as pieces of the puzzle that is Glitch City and its inhabitants slowly click into place. And every so often, the story will overrule normal gameplay, further reinforcing that VA-11 Hall-A is first and foremost a character-driven narrative. If Jill doesn’t feel well, her shift will be cut short so she can go home early — less drinks to mix than usual. During the (Mega) Christmas party, the whole drink-mixing aspect is set aside in favor of an interactive game of truth-or-dare. And then there’s this moment: 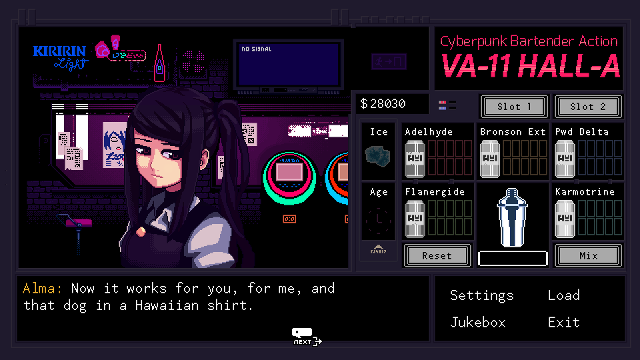 I won’t tell you *exactly* what happens, but suffice to say I was laughing for almost a minute.

VA-11 Hall-A is a very funny game too, overall. Funny in multiple ways: sometimes it’s clever-twist funny, like the above screenshot. Sometimes it’s laugh-out-loud funny. Most of the time, it’s simply subdued funny: the world this game takes place in and all the characters have some tinge of the cyber-future bizarre to them, but played straight. Which is just… funny, I guess. One employee is a dog in a Hawaiian shirt and sunglasses. Jill always giggles at the drink ‘Bad Touch’, which, yes, is named after the Bloodhound Gang. Everyone calls Gill some variant of John, just because he’s got that John-face going on. At one point a disembodied brain in a glass jar visits the bar. 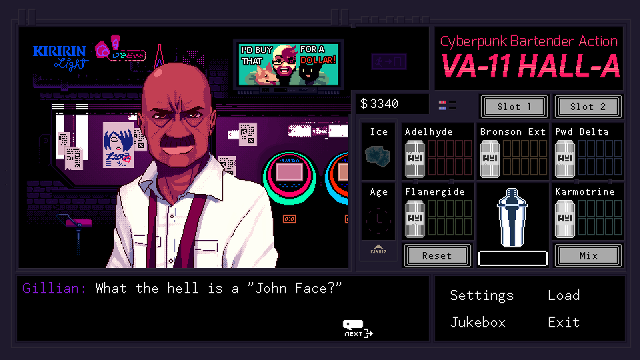 I don’t know why this is all so funny to me. But there you go. Point is: there’s something to giggle or laugh or subduedly smile at for everyone.

Not that it’s all fun and games. 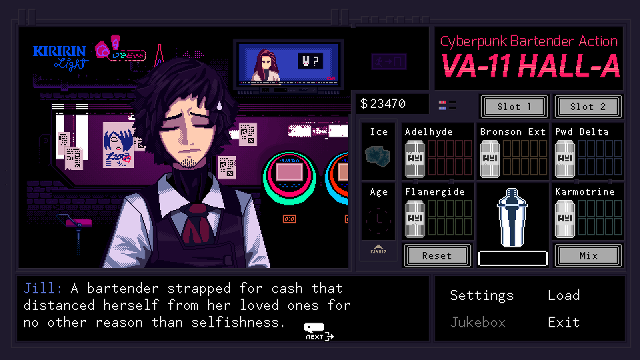 There’s the occasional bit of Genuinely Dark Story in here.

Now, so far, all I’ve talked about is the story. VA-11 Hall-A gameplay is interesting in the sense that it often feels as… some sort of unnecessary overlay to the story. Like I said, this game is visual novel at heart, so it’s mostly a game of reading text about characters interacting. I haven’t seen any overt ‘choice moments’ yet, the way you’d see them in other VNs. You just talk a lot. But then every so often, characters ask for a drink. And then you make them a drink. And then the story continues. 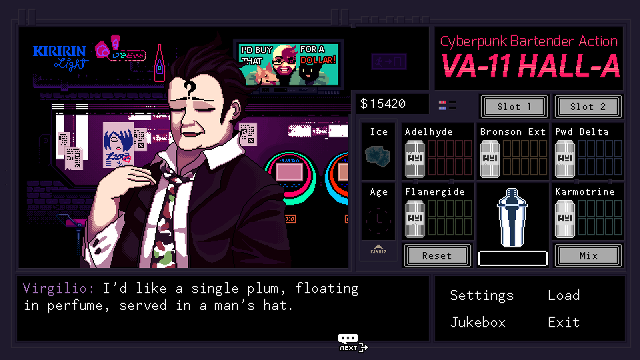 Some drink orders are more *esoteric* than others.

There’s a bit of a meta-element where Jill needs to make money to buy goods and services that she likes, otherwise she’ll get ‘distracted’ at work. And the better you serve, the more money you earn. Again, it feels oddly added-on at first. Like in Papers, Please, you understand why the mechanic is there, ludonarratively speaking. But the whole thing — the drink serving and the money-making both — don’t seem to add much to the overall experience. It subtracts from the story, which is what you’re here to see, more than it adds in ludic pleasure — particularly since the actual drink-mixing is fairly easy and super forgiving. There aren’t even any penalties for overtly messing up and trying again. 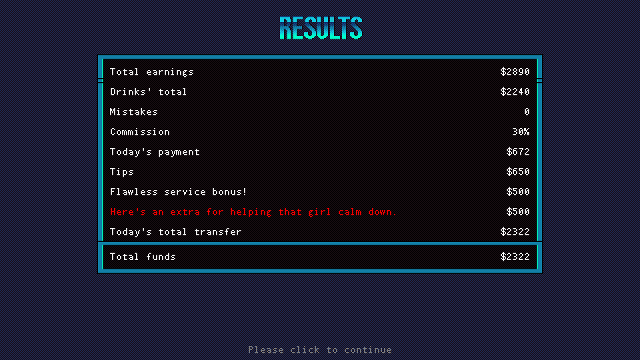 The presence of a ‘perfect service run’ seems to add some pressure, initially, but most of the time it’s just not very hard to do.

But much like Papers, Please, VA-11 Hall-A gameplay sometimes intersects with the story in interesting, memorably ways. Remember how in Papers, Please you would sometimes be asked to let certain people through, to ‘fail’ ludically in service to the narrative? Once, in VA-11 Hall-A, a client ordered a particular drink. But Jill intuited that this order was ‘unlike her’, and mentally suggested that maybe instead we should make ‘that one drink that she likes’. 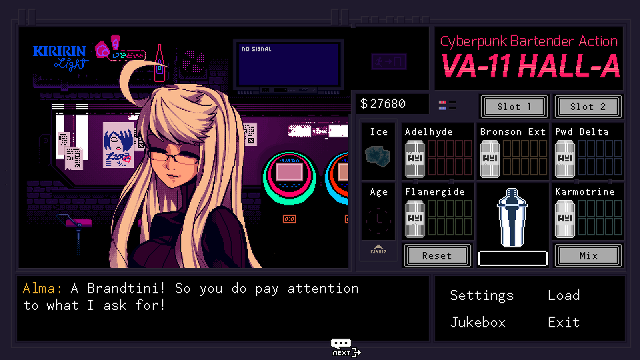 Not this specific situation, but it worked here too — she asked me to give her ‘the drink she likes best’, and I actually remembered.

About 80% of the time, the orders you’ll get are pretty straightforward. ‘Give me this drink’, or maybe ‘give me a drink in this category’, and that’s it. The other 20%… Mr. Donovan wants the usual. Remember what his usual is? Underage girl Streaming-Chan asks for a drink that optionally has alcohol in it. Which one do you serve her? Should you really give Sei that hard liquor she so absent-mindedly asks for? and when Vergillio comes in… Well, let’s just say I understand that it’s frustrating for Jill to decipher these non-orders, but I actually thought it was pretty neat. Some challenge for once.

Again, this stuff doesn’t happen often. At least not at first; I’m feeling like it might be picking up as I get further into the game. But here’s the thing: even in ‘normal’ orders, you can express yourself in small ways. Do you serve a small drink or a big drink? I’ve found myself upgrading drinks to ‘big’ for customers I like. Which ‘manly’ drink is the best fit in this scenario? Karmotrine or no Karmotrine? It’s all small stuff, but it helps to settle you into the ‘bartender’ mindset and fantasy. There is always a ‘correct’ answer (or subset of answers), which I suppose hurts the freeform idea a little. But even there, it’s more about being rewarded for reading the situation correctly and knowing your patrons, than it is a punishment for not getting the orders right. Don’t worry about the cash you’re missing out on, okay? The chances of not being able to pay your electric bill are fairly low.

Still, though. Drink-mixing is often a fairly simple activity, almost mindless at times. I have to assume that’s intentional. It forms little breaks between lengthy reading, given you time to digest story beats as you look up the Moonpunch recipe (again). If you’re looking for a strong ludic challenge — one that doesn’t involve deciphering the riddle orders of pompous assholes — you might find VA-11 Hall-A a little light as an offering. But if you’re here to read a cool branching, morphing story about life in a cyberpunk city in decline…. where robots become pop stars, and corgis run business empires, and bunny hackers interfere with terrorist bank heists, and lying politicians and power-playing news CEOs live their lives in the top tier while everyone else just tries to get by and maybe score a quick drink…

Glitch city really is a very cool setting. It’s handed out in dollops, rather than lore dumps: every new day tends to introduce one or two cyber-future elements you haven’t seen before, all woven organically into the smaller and larger stories of your bar patrons. Robot sex workers, cyber arms, White Knights, brains in jars, Mega Christmas… It’s a setting I wouldn’t mind seeing more of, I guess. From another angle (one that’s stronger on the power fantasy and looser on the morality), it could be a cool Shadowrun setting. Or maybe something like Tom Clancy’s Ruthless.com, for the ten people on the planet that remember playing that terrible game.

But as it stands, at the start of the third chapter, there’s still plenty of Glitch City intrigue to be discovered in this vantage point. Right in this place, and right in this way: by mixing drinks and changing lives.

To summarize: VA-11 Hall-A is a really neat cyberpunk-themed visual novel with a fun enough bartending gameplay mechanic, at at worst doesn’t interfere with the story and at best adds to it significantly. It tells a variety of well-written character-driven stories, short and long, that slowly build the surrounding setting and inextricably link it with the lives of those around you. It mixes a lot of humor with a light dose of dark-and-serious topics, and it isn’t afraid to flip the tables on you — both narratively and ludically, but not involving actual tables. As far as I know. And hey, I haven’t even mentioned the excellent art and music yet! The art speaks for itself, I think. As for the music, I have only one thing to say: different strokes for different folks is fine and all, but if you don’t have Base of the Titans as the first song on your jukebox playlist, your experience will be forever less than what it could be.

VA-11 Hall-A runs about fifteen bucks on Steam. If any of the above sounds like your jam, I highly recommend it. I’ll definitely be playing more myself, time permitting — if only to find out just what the deal is with Gill. 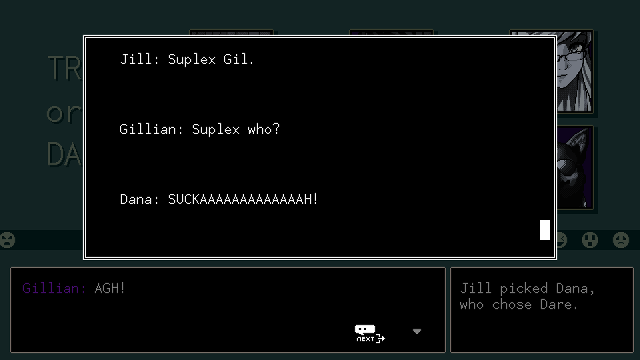 I don’t think any Gill reveal will ever top this one, but there’s no harm in trying.

Jarenth’s active bartending knowledge extends to ‘pouring whisky into a glass with other whisky’. Don’t ask him to flip a bottle, that’s just disaster waiting to happen. But feel free to share cocktail recipes on Twitter or hang out with him on Steam. And if you dig Indie Wonderland and Ninja Blues in general, why not consider supporting our Patreon campaign?