I assume you’re familiar with ‘you get what you pay for’? Here on VNADS 2016, we’re about to put that truism to the test. I found on Steam a visual novel called Sepia Tears: Midwinter’s Reprise (by Scarlet String Studios), for the unenviable price of zero dollars and no cents. An entire free visual novel! That’s like the review equivalent of nature’s bounty. Of course, there’s a significant chance that there’s a good reason no money is asked for this product. But we won’t know that until we try, right?

Welcome to another exciting VNADS 2016 adventure, readers! Let’s find out of Sepia Tears is figuratively worthless as well as literally.

(Game source: Technically I could put anything in here and it’d be accurate. I’m going to go with ‘happenstance’.) 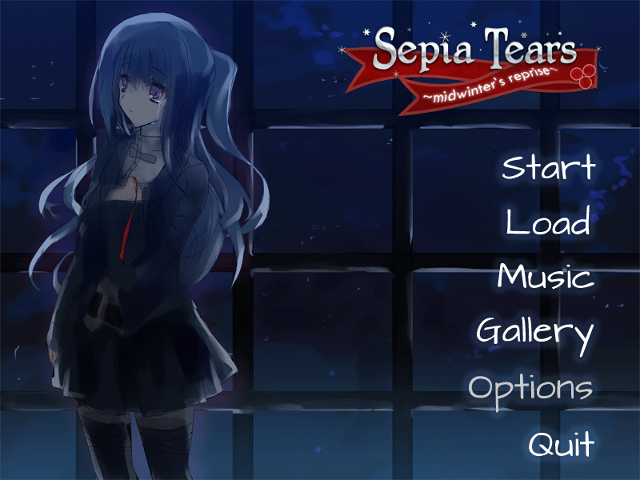 Does it have options? You know it has options. 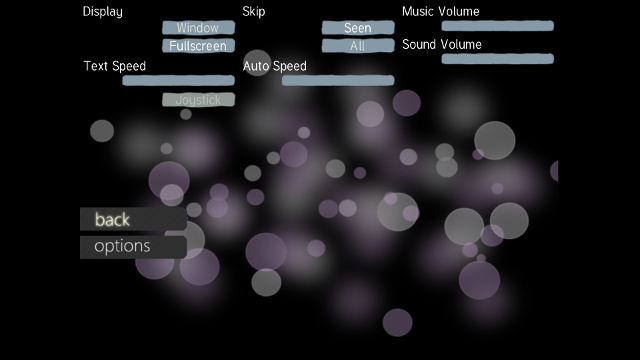 You probably even knew which ones!

Does it have a jukebox? 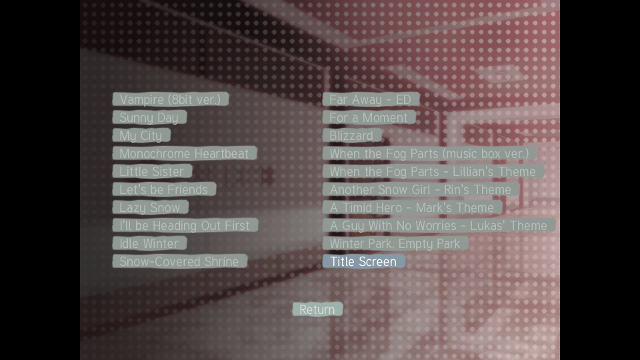 Does it have any reason for me to linger on the title screen any longer? 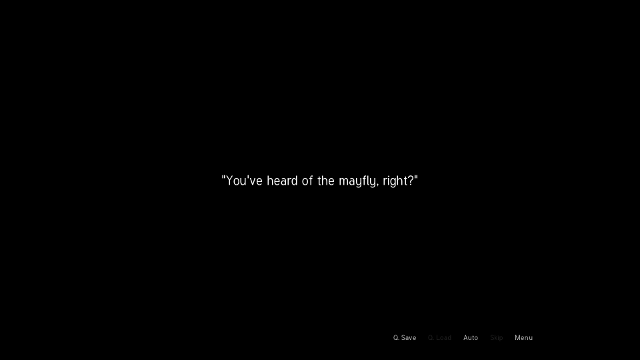 “You’ve heard of the mayfly, right?” an unidentified text voice asks on a black backdrop. This is then immediately followed by an absolute info dump of scene-setting. 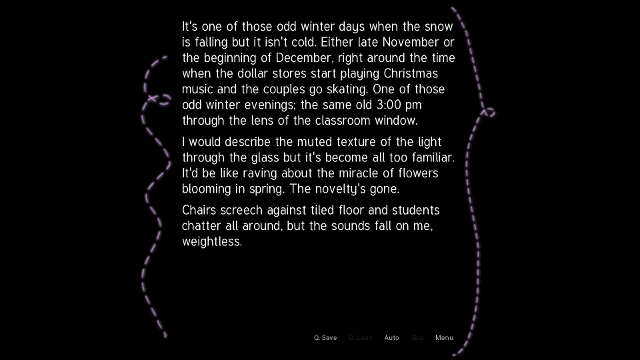 There’s something ironic about encountering purple prose on a black-and-white video game screen.

“The mayfly? The bug that lives for only a day once it grows its wings?” Scintillating conversation, this. And it’s followed by another few blocks of purple-dashed purple prose. The voice character talks about their mind wandering, about daydreaming, about having a distracting voice in your head and drowning out that voice by sticking to the routine of everyday life. It’s pretty easy to do, apparently, if you think about it.

“But sometimes, memories resurface: the horrible red-brown that encroaches on my vision, creeping from a box locked safely away.” Hokay. I’d say that the tone of this intro has been all over the place, but that implies there was enough here to get a sense of tone to begin with. 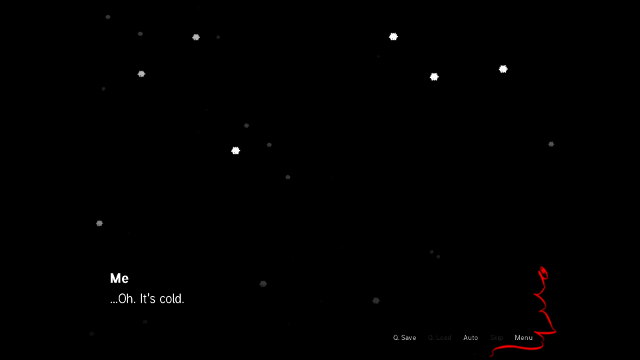 On the plus side: cool animated snow effect. On the minus side: I *literally* don’t understand what’s happening anymore.

To their credit, the main character is just as confused here as I am. “Is this a dream?” they wonder out loud. “That would make sense, but then why would I be wearing my school uniform, and why is my wallet in my pocket?” Which sort of clinches it for me: that is a great example of nonsense dream-logic in action. ‘I’m wearing my uniform and carrying my wallet, so this can’t be a dream.’ Alright, wiseguy, but how about the perfect void of black with inexplicably visible snowflakes we’re finding ourselves in? 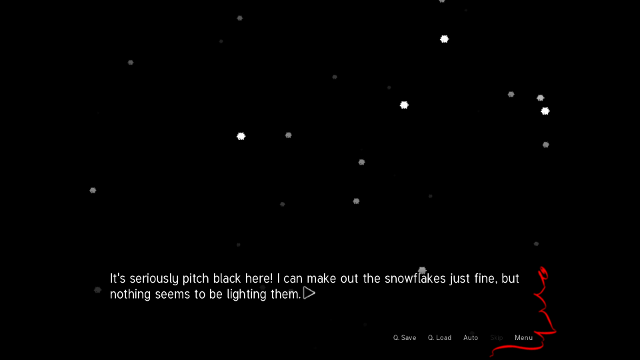 Okay, so you actually call that one out. Touché.

Anyway, then some weird shit happens. 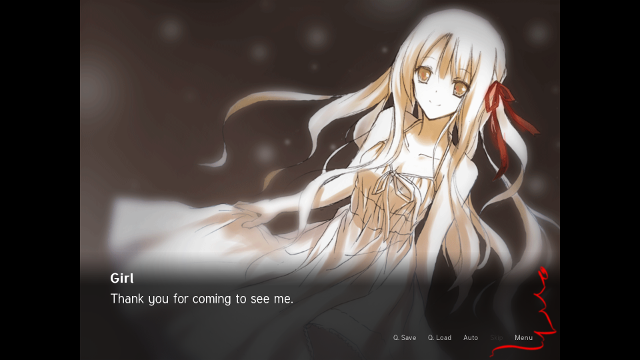 I’m gonna go ahead and move the ‘strange dream’ probability to… let’s say 78%.

Which is then followed by… 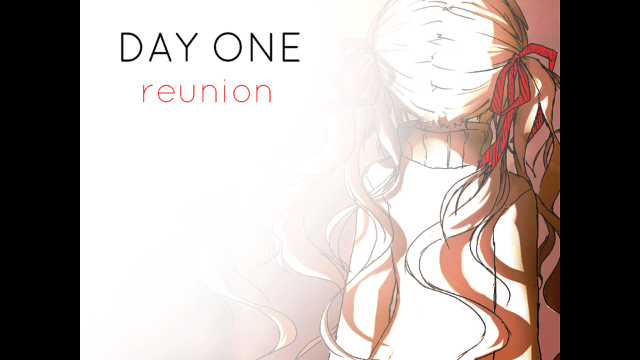 …a splash screen, which *then* leads to…

…our protagonist being woken up by his little sister. 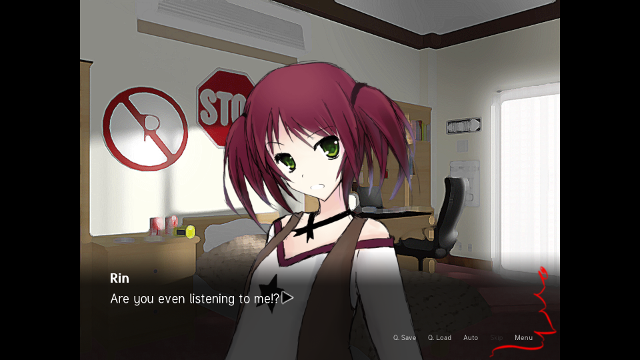 And just like that, we’re in familiar waters again.

Well. This is definitely… i

Some light scene-setting happens. Our protagonist this time around is called Mark, an unconventionally Western English name. His sister’s name is Rin. They live together, in that typical anime VN fashion where parents are mentioned (just so you know the whole thing’s on the up-and-up) but never shown or interacted with. So far, Sepia Tears seems happy to stick to that script. Another script it seems happy to stick to: the ‘innocent-looking little sister who is actually a mean-spirited dervish’ trope. 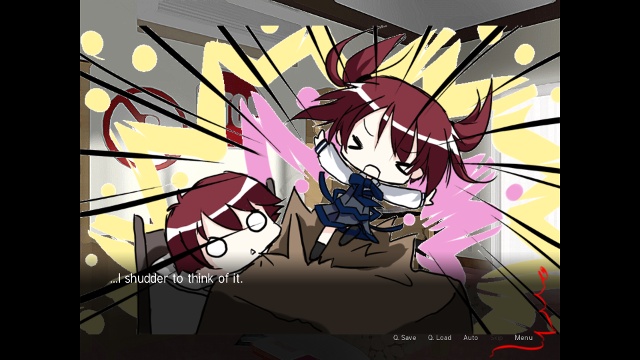 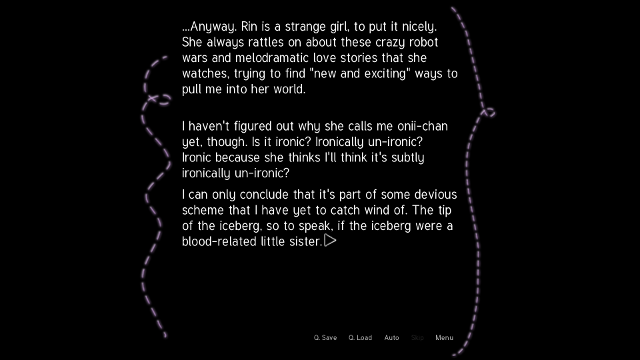 But don’t be getting any ideas: it’s apparently important for us to know that these two are legit blood-related. 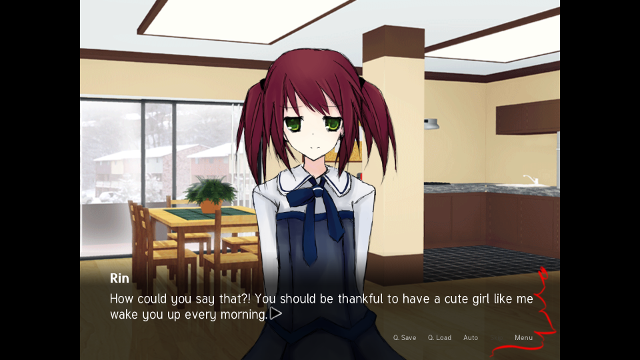 Honestly, I don’t even know where you get these ideas.

Mark steps outside, further revealing our setting to be Surprisingly American. 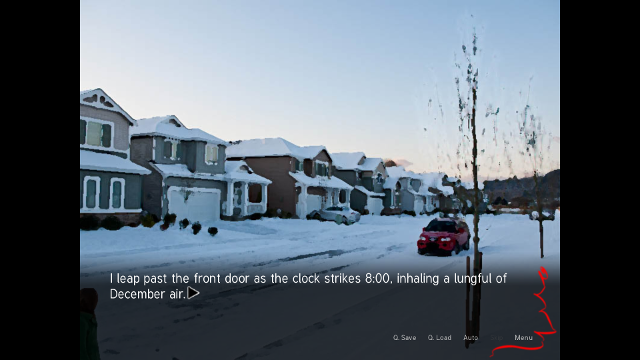 Honestly, I was waiting for the Phoenix Wright-esque ‘no, you guys, this is totally the United States’ twist.

And then it’s off to school!

After a lengthy non-sequitur about Rin’s martial arts preferences. 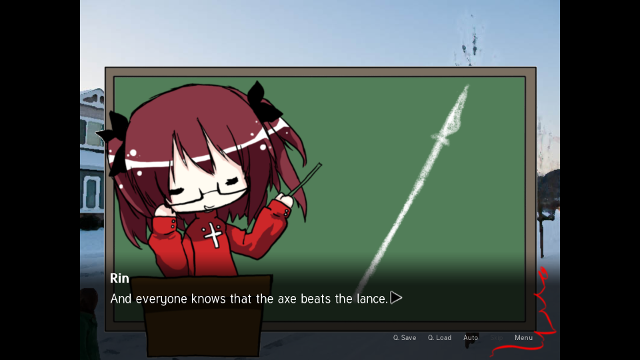 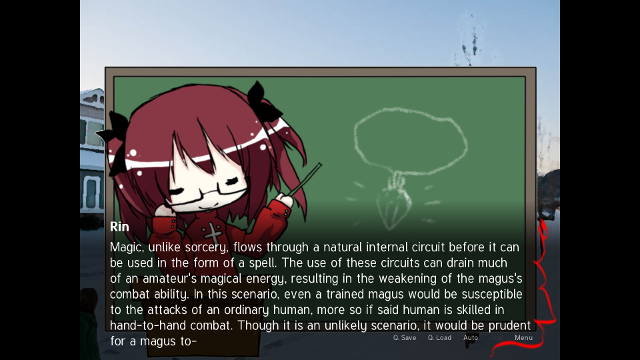 I’m sure this won’t be relevant and meaningful later.

Rin runs off. Mark decides to walk to school alone, so he can ponder his thoughts. There’s snow, and solitude, and the fleeting imprint of a purple-haired ghost girl. Mark dismisses the latter as ‘can’t be that important’. 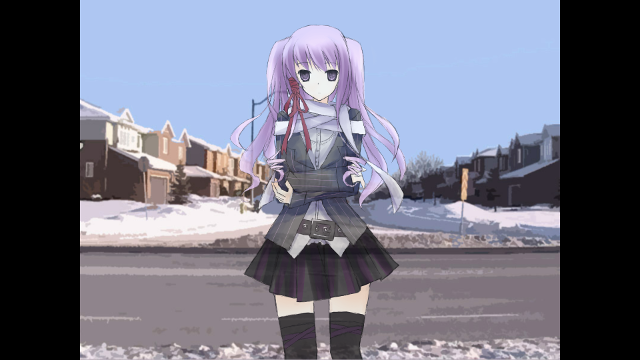 But you all better appreciate this screenshot, because it took me a few tries to get it — the image fades in and out pretty quickly.

Then I meet some friends! 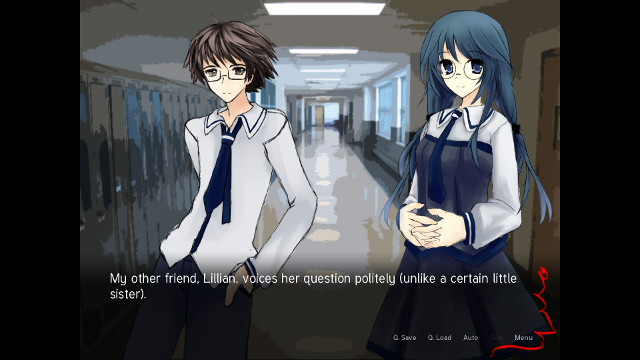 With visually distinct art styles! For some reason!

Okay, lemme make sure I recount this accurately. One moment, Mark is in class, ‘listening’ to a teacher. After class, Mark and his friend Lukas have an entirely fourth-wall-preserving conversation about Japanese visual novels and dating sims, one that I obviously frown at — from a position of expertise, you understand. A few cutaway text prompts show up, which… seem to narrate from another character’s perspective? But apart from that, it seems like Situation Normal: Not One Hundred Percent Sure What’s Going On Yet.

Then we cut to the evening. Mark is walking home, alone, again. Suddenly the ghost girl shows up again! Except this time she’s real! So Mark — naturally — decides to chase her, through the snowy darkness, into unknown neighbourhoods and alleyways, all the way to…

…the school building again? Where the two of them then suddenly (‘suddenly‘) find themselves on the rooftop. 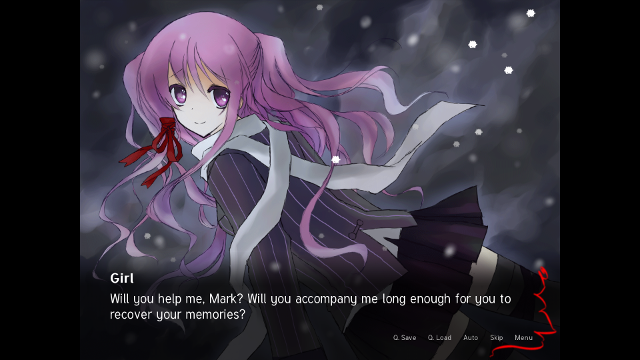 Some talking happens. Mark doesn’t know who this girl is. The girl seems to know who Mark is. Mark needs… help? Regaining his memories? I guess?

Then the girl steps off the roof of the school. And disappears. 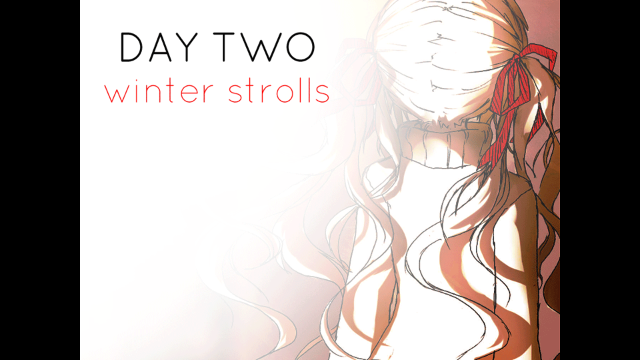 And I’m left… confused? I want to say ‘confused’, but all the same I’m not sure if ‘confusion’ really covers it. I’m half an hour in at this point, one ‘day’ into the store, and I have no idea what’s going on. I barely know two characters and have been introduced to two others, and I know the absolutely minimum of their social arrangements and living conditions. That’s it. What’s the story here? What’s the hook?

Even bloody Sakura games tend to have their setting established at this point. ‘You’re the last ancestor of an evil sorceress and scantily-clad angels must protect you from her army.’ ‘You’re an ace student who joins a struggling swim team.’ ‘You’re a victim of long-running emotional abuse under the guise of friendship.’ That level of summary. So far, Sepia Tears has given me nothing. ‘You are Mark, a high school student.’

Okay, no, that’s not fair. Sepia Tears has given me one thing: utter confusion. ‘You are Mark, a high school student, and an incredible amount of unconnected, non-sequitur, fourth-wall-breaking stuff happens around you all the damn time.’ Maybe that’s the hook? I guess there’s only one way to find out.

Readers, I will see you one page from now. Hopefully at that point, I’ll be able to tell you that I understand what Sepia Tears is all about, and that it’s actually, secretly, a hidden masterpiece.