“Jarenth, are you just reviewing this game because you wanted to babble about the title like a lunatic?” Okay, okay, you got me. I actually saw a lot of We Know The Devil news and hype pass by my Twitter timeline around February/March this year, in no small part because I follow the indefensible Twitter account of Aevee Bee — one of the Date Nighto triumvirate, creators of this game. I didn’t get around to playing it at the time, for reasons that… I don’t actually remember? I’m going to say I mentally banished it to November, because all visual novels instill that automatic fear reflex in me now. Whatever the cause, I’m getting around to it now. Save for the apparent importance of a few alchemical symbols, I’ve actually managed to stay entirely spoiler-free, so I have no idea what to expect. Presumably the devil will be involved.

Shit, it turns out I knew the devil all along! 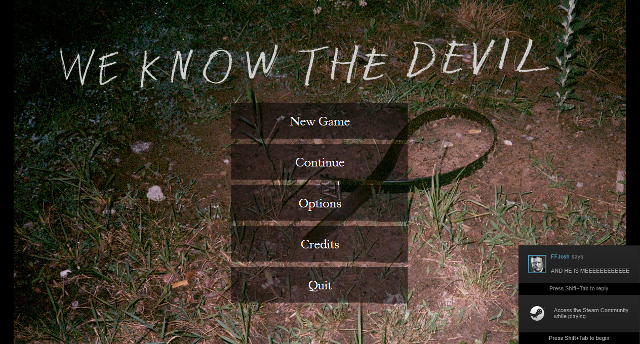 He didn’t pose for this picture, but I *did* get consent to use it.

This is an interesting title screen. Is that just an actual photograph, of a forest floor in darkness and a belt? I’m sure there’s some symbolism I’m missing here. And the music is… hard to describe. Crackling? I’m gonna go with ‘crackling’.

Where last week’s Sunrider Academy had a VN-unbecoming plethora of options, We Know The Devil compensates the other way by having almost none. In fact, these are they: Full Screen yes or no, and ‘Progress with Scroll Wheel’ yes or no. And two audio sliders. 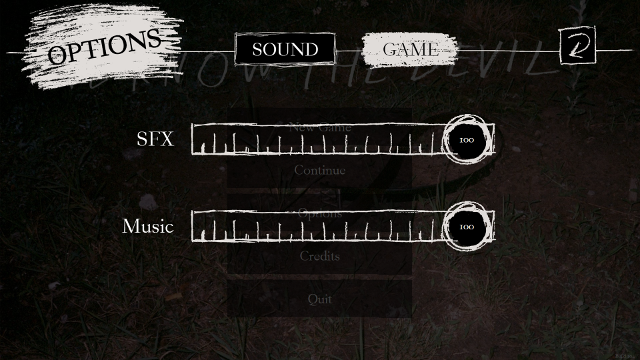 I do dig that both these and the title are drawn in the same scrawly chalk.

And since there’s nothing else to fiddle with on this screen… I might as well get this getting-to-know process started!

Wait, does that make this a first date with the devil? 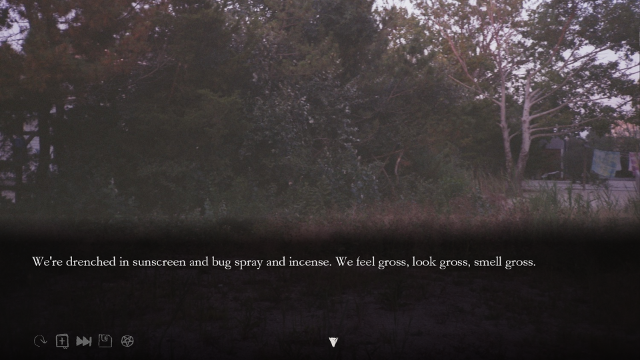 Because I’ve had first dates like these, let me tell you.

As a non-American, I have incredibly limited experience with the cultural touchstone of ‘summer camp’. But I know enough, and also I’ve read enough of the game blurb, to recognize the setting. I can’t say this line is selling me on the merits of the concept a lot, but then again, I was firmly un-sold as it was, anyway. But then again, maybe that’s the point?

“We’re sunburned and bug-bitten and behind us is the devil, every annoyance of summer nipping at our heels.” Ah, okay. So this is going to be one of those metaphor stories. The devil as the shittiest possible summer camp. I can work with that. Was kind of looking forward to meeting the actual devil, but life is full of disappointments, I guess. Also, two pages in and I still haven’t worked out who this ‘we’ frame is referring to. Or who’s talking. Are there actual people in this photorealistic forest scene? 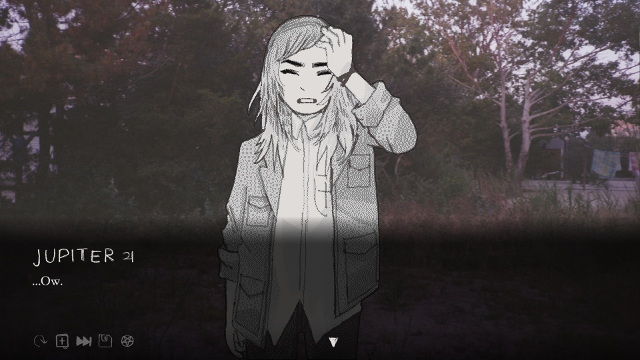 That’s Jupiter’s queue to stumble onto the scene. 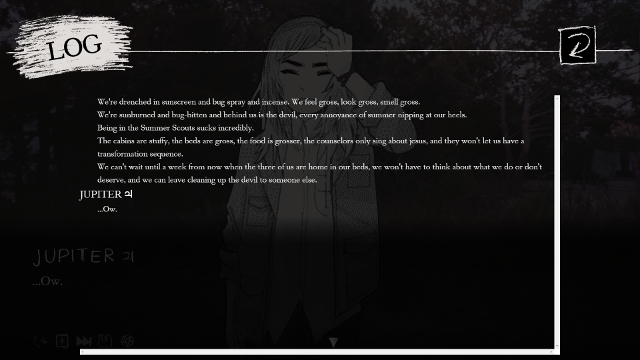 I take a moment here to fiddle with the in-game UI. There’s a text-forward button, a save button, a ‘rewind’-looking button that I don’t know if it does much, a cross in a box that opens this text log, and a pentagram. The pentagram summons the dreaded scourge of game options.

Well, this is interesting. Ten seconds in and I’m already really digging the art style. This contrast between high-detail dot matrix drawings and slightly out-of-focus photorealistic backgrounds makes for interesting visuals. And without me really noticing it, the audio seems to have switched to a non-musical track, singing birds and summer camp background stories. It’s gloomy, grey, stark, and immersive; if We Know The Devil aims to contrast itself to the larger pack of colourful anime boobs, it’s at least sticking the ascent here.

Anyway, this is Jupiter! I’m not sure if Jupiter is supposed to be me, but I do know that Jupiter just took a nasty blow to the head, somehow. I know this because two other characters immediately rush to her side. 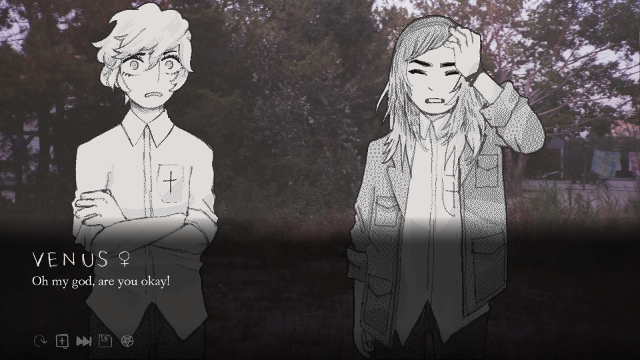 Or, well… this is Venus, who does actually rush on-screen to help. 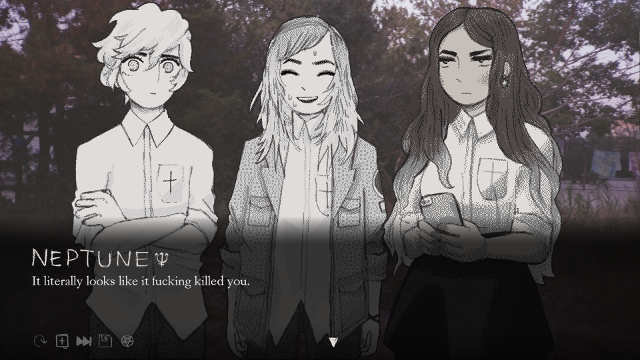 Neptune, on the other hand, looks like she *never* rushes for *anything*.

Venus, Neptune, and Jupiter. What are the odds of these three kids randomly meeting each other at summer camp? That seems like the kind of situation where you can’t help but be friends; even if you don’t necessarily want to, everyone else is just going to assume as much and egg you on. They’d call you ‘the Planet Squad’, or ‘the orbiters’, or maybe ‘those astrology geeks’, depending on the meanness of the local social hierarchy. But Venus, Neptune, and Jupiter seem to get along well, at least well enough to spend several minutes worrying about Jupiter’s head injury. Well, Venus does most of the worrying. 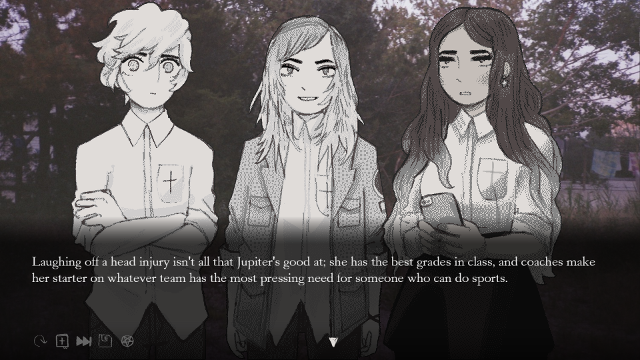 Quick introduction time! Jupiter is apparently Good At Things. Grades, sports, taking the lead, you name it. She throws her weight around in anything she does. Except she apparently always whiffs the closer. Performance anxiety? She also seems to have a thing about touch, or maybe about being touched.

It turns out the group is late for some central summer camp thing — ‘it’s already 6:06’, hah — which worries Venus and Jupiter and mostly annoys Neptune. Neptune seems to be, for lack of a better phrase, the cool teen. She’s the most glamorous of the bunch, and she’s either very distant and mean to her camp-‘friends’, or just trying not to focus on the trouble at hand. She’s been on her phone for as long as I’ve seen her, texting someone who has the good fortune of not being in this summer camp. She also has a nasty cough of sorts. 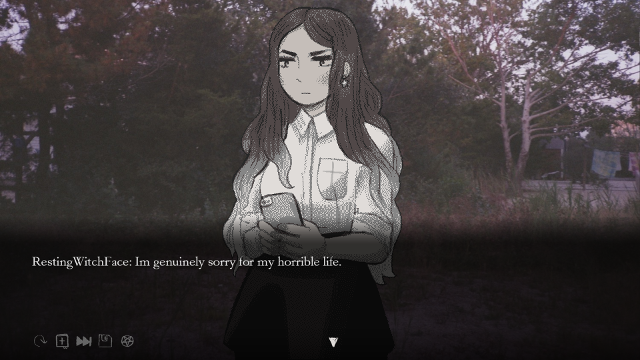 This is some convincing-ass texting. You can tell this was written by someone with a social media presence, someone who actually uses stuff like Twitter a lot.

And Venus… Venus will have to wait, because we just arrived at camp! Everyone else is already here, of course. Up to and including the Bonfire Captain, who now haunts my nightmares. 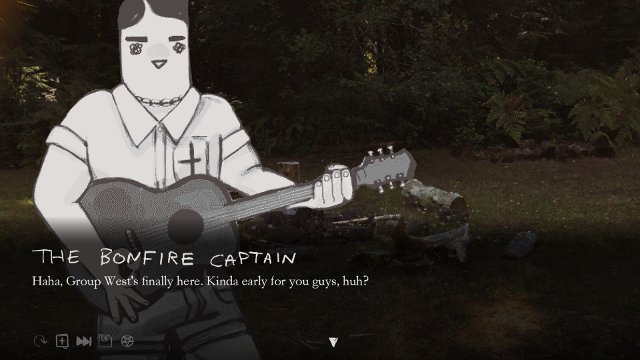 What is wrong with his *eyes*

The group is late, but Venus takes the heat. Venus is shy and unassuming, but in that way that makes everyone well-intentioned towards him. Of course ‘Group West’ didn’t mean to be late! Venus smiles shyly and mutters some apologies, and nobody would even think he was being untruthful. We all think he’s kind of a cringey doofus, but…

Group West sits down at the fire, and I suddenly realize I don’t understand who’s talking. This entire time, the narration and all the character introductions have been done in first-person plural. We are late. Jupiter is better at sports than us. We like Neptune because she’s fancy and funny. Venus takes attention off of us. But then… who am I? I figured I’d be the viewpoint of one of these characters, but apparently that’s not the case. Am I some fourth character, yet-unintroduced? Is Mars or Mercury going to barrel onto the scene?

The Bonfire Captain starts the camp meeting. I assume more kids and groups are here than just ‘us’, but I don’t get to see them. He sings sermon songs and rouses ‘attention’, then tells a strange, rambling story about how friendships of three people never work and you always have to choose one friend over the other. Not foreshadowing in the slightest, I’m sure. And then, when it finally looks like everything’s going to be fine for our Group West… 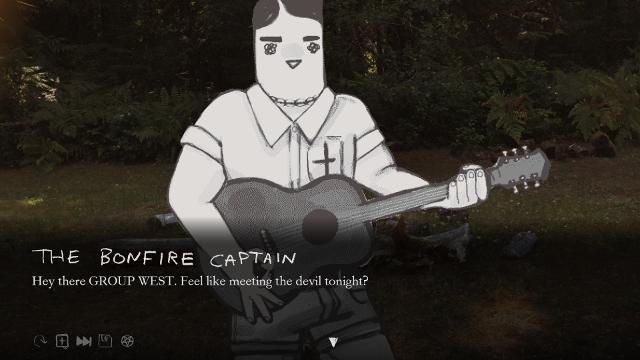 I don’t want to know what this is a euphemism for.

I don’t know what ‘meeting the devil’ means, but Venus, Neptune, and Jupiter seem less than happy with the idea. 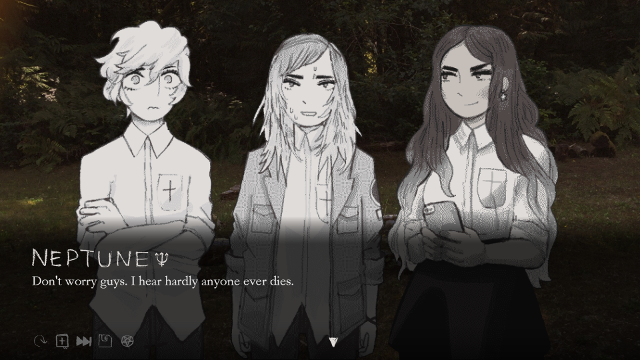 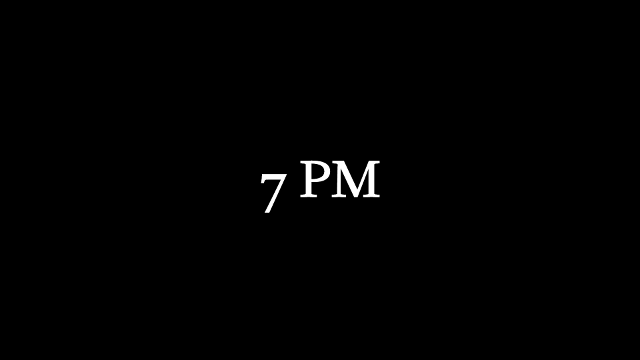 …and Group West is now out and about again. They’re chatting and/or bickering with each other, and doing… some chore? It involves diodes, pole-climbing, and risk of death, which I guess is intrinsic to pole-climbing. 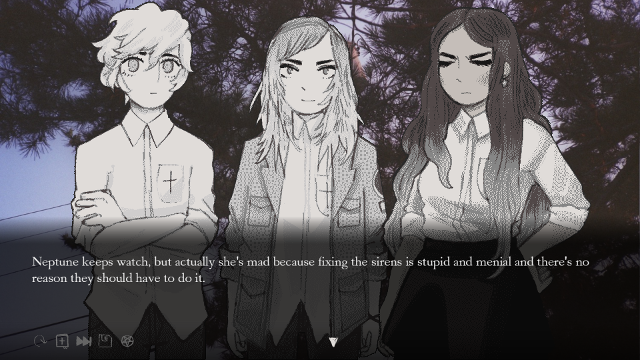 Oh, they’re ‘fixing the sirens’. Which I assume is a euphemism for sirens, that need fixing.

All of a sudden, Group South shows up. They’re the bad teens, as evidenced by their wild haircuts and their fashion accessories and their shirts with their own faces on them. And also their bible. 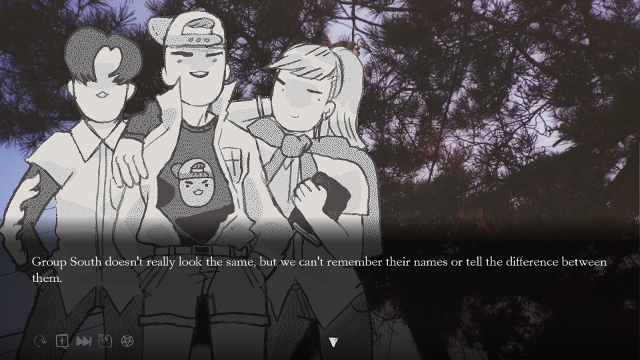 Come on, though, guys. ‘I can’t even tell them apart’? That ain’t cool. 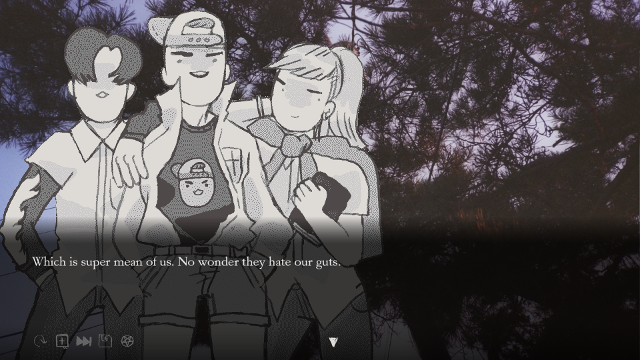 Oh, I guess you’re actually aware of that.

Group South is here to hassle Group West during the siren repair chore. Classic Group South. Specifically, they’re telling us that we should be fixing the lake sirens, not the forest sirens. And that it’s Venus’ fault for misunderstanding the Captain. And that Venus sucks and should probably go home.

Suddenly, I get a choice in the matter! 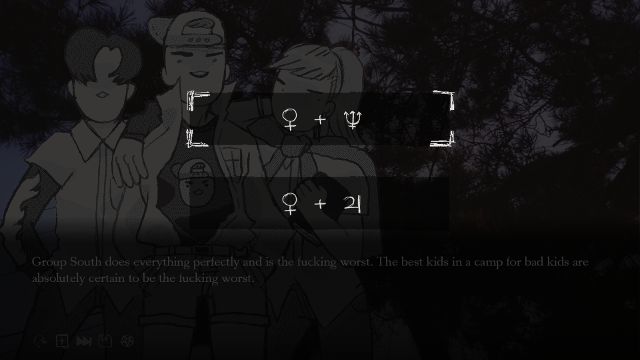 Hmm, symbols. Venus and Neptune? Or Venus and Jupiter? I opt for the latter. This leads to Venus and Jupiter walking off to the next siren, while Neptune stays behind to do what she does best: talk smack to fools. 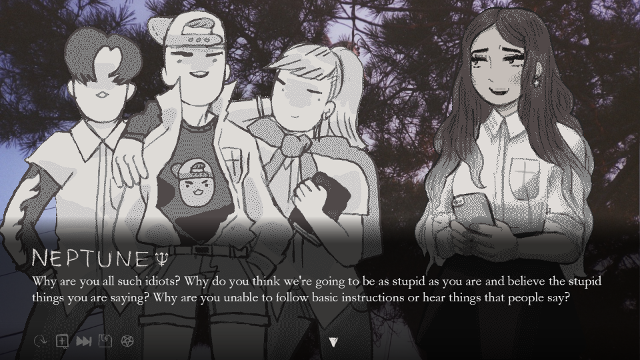 Look, she’s actually smiling! And looking up from her phone! This must be the best part of her day!

Away from Neptune, Venus and Jupiter have a chance to talk among themselves. They also talk smack about Group South, but, you know, less intense. Turns out they actually like Jupiter, but Jupiter only hangs out with them to avoid the ‘bad’ attention. Venus doesn’t understand, because why would you spend time with people you hate? People who hate you? But, Jupiter says, it’s easier to hate the people you don’t know than the people you do. You’re still spending time with people you don’t like, but… It’s complicated.

Then it’s 8 PM. The scene shifts, and we’re now at a dilapidated cabin in the woods. 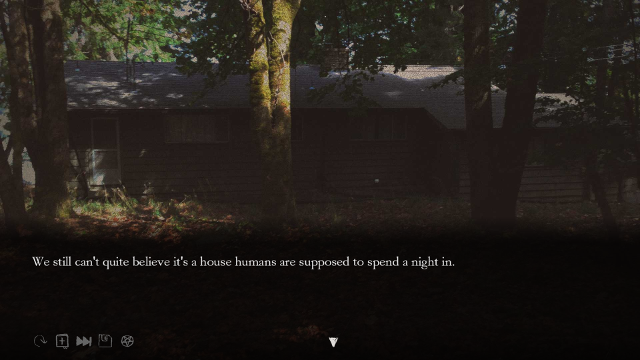 Which I assume is called either ‘Ghost Cabin’, ‘Devil Cabin’, or ‘Makeout Point’.

‘Meeting the devil’, turns out, at least partially involves spending the night in this shabby-ass woods cabin. Maybe made by the Captain himself! At… about 60% of regular human scale. It’s weird. It’s also terrible, busted, and completely unfit for human habitation. 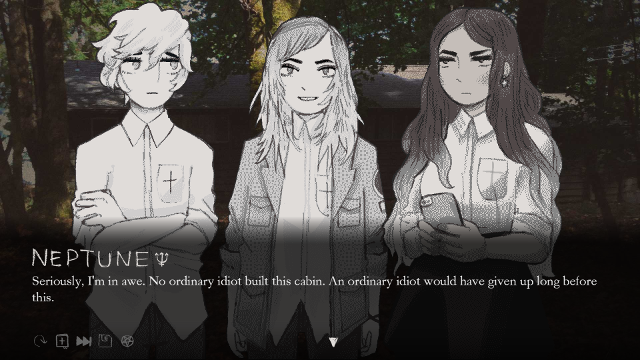 Oh, Neptune. I’m starting to think you might be one of my favourites.

The group chats about the minutiae of the cabin. Apparently it’s… warded? With crystal, and wire? Against the devil? They are really taking this metaphor places. They then decide to do a quick sweep of the building, to make sure it’s not currently on fire or anything. Which for some, probably inscrutably Scooby Doo-esque reason involves splitting up. 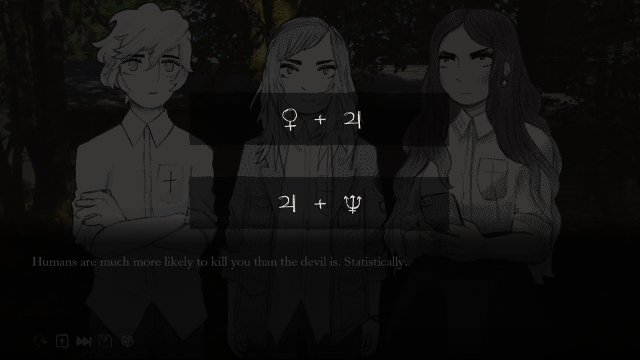 And you know what *that* means.

I did Venus and Jupiter last time, which means I’ll pick Jupiter and Neptune now. Their chat has a much more… kind, close vibe to it, probably in no small part because the part of the house that we end up exploring is a flower-rich ex-greenhouse, inexplicably filled with furniture. It’s a touching scene of the beauty of nature and the casual intimacy of sharing an amazing discovery between close friends, right up until the point where Jupiter accidentally wrecks it. 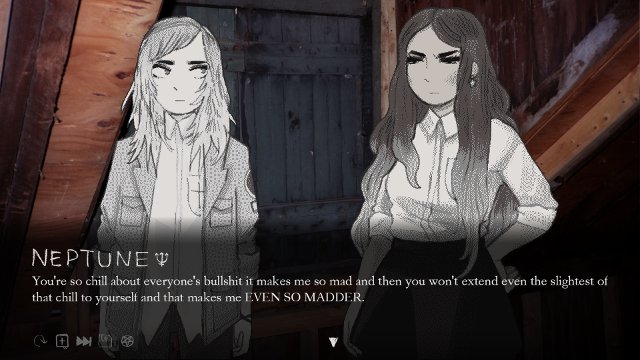 Then it’s 9 PM. And… okay, I think I have the lay of this game now. Group West has to spend one night in this creepy ghost house, right? So I’m predicting one scene every hour, one choice point per scene. Character A+B or character A+C. And then… at the end, your choices determine how the story wraps up? That seems like a visual novel thing to do. Plus, the whole thing matches so neatly to the Captain’s friendship story. I figure the night’s gonna end, nothing bad happens, and then two of the three friends discover they have more in common with each other than with the third. Or maybe even not, if I play my cards right. Either way, I’m gonna get through this silly ‘meeting the devil’ metaphor in a moment — see you on the other page, where the sun has risen and everything is good forever.