One of the very first visual novels I reviewed for this VNADS experiment, back in the heady heydays of 2014, was Sunrider: Mask of Arcadius. I remember thinking it was an interesting game: it combined a fairly straightforward and competently-written character-driven romance story with number-crunching tactical space battles. Which had its ups and downs, as an approach, but it was definitely unique enough to warrant remembering. It was quite a stretch from your standard ‘all characters attend the same high school’ cliché setup.

And here we are, two years later, with Denpasoft‘s next game. Sunrider Academy. Which takes the same colourful and interesting characters from Mask of Arcadius… and puts them all in a high school together.

Yup, those are the same doofuses alright. 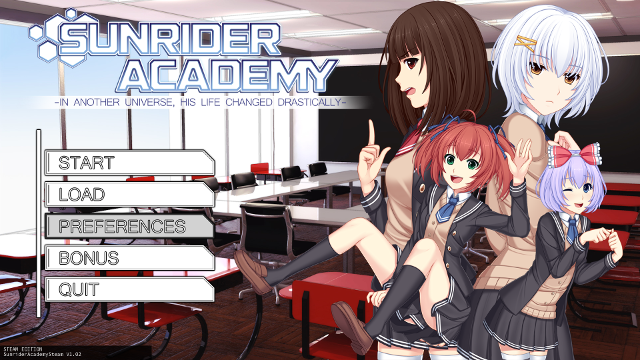 Up to and including the exact same hairstyles.

Like its spiritual… influencer, Sunrider Academy has a particular approach to menu design and content. The blocky white bars and the poor use of screen real estate feel like blasts from the past. As does the options screen, which immediately dispels worries that this’ll be another ‘standard’ VN. Most visual novels don’t have difficulty settings. 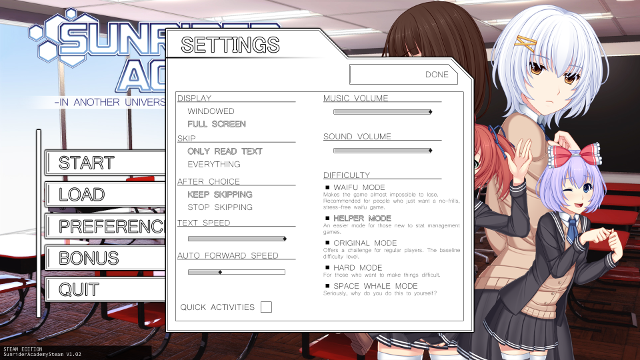 Yeah, I set it to ‘Helper Mode’. I remember Mask of Arcadius. I’d like to be able to make some actual progress in one week.

I have to say, I’ve actually been looking forward to this game. It’s been around since last year, and I initially had it pegged for VNADS 2015 as sort of ‘revisit the old haunts’ theme. But then that obviously didn’t happen in favour of me becoming a Sakura Expert. I really wonder how Denpasoft’s previous focus on tactics and number crunching translates to high school drama.

Is that the school bell I hear? I think class might be starting! 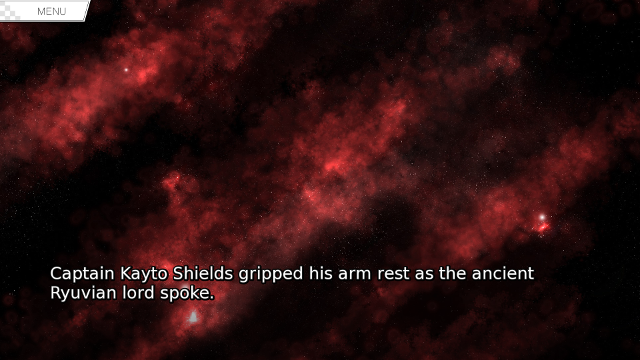 ‘Captain Kayto Shields spoke with the ancient Ryuvian lord threatening the human race. The battle looked grim, as four new cruiser-class enemies warped in to even further unbalance the scales. The commander yelled about the core going critical, as usual. He was out of options: the Vanguard Cannon was low on command points, the Seraphim rider’s buff had worn off, the Black Jack and the Phoenix were caught out and close to death.’

Did I… launch the wrong Sunrider game by mistake? If you’d asked me to pick a game on that description, I would have said Mask of Arcadius. 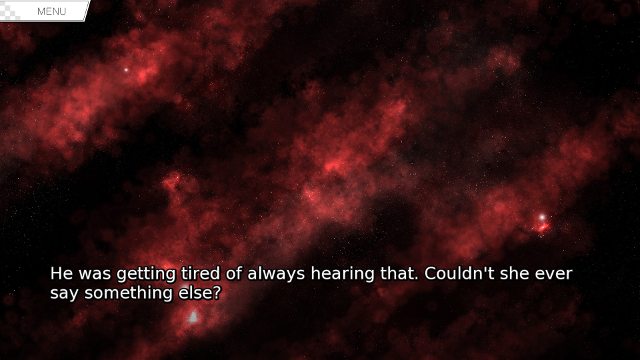 This in particular rings *very* true.

The enemy ships fire all their missiles and lasers! The enemy commander mocks! ‘Farewell, captain!’ And then!… 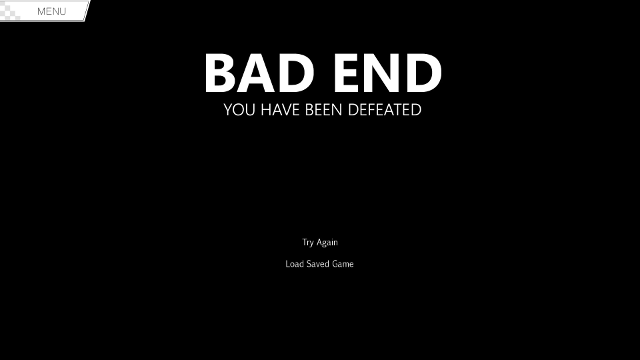 For a moment, nothing makes sense. And then it does. 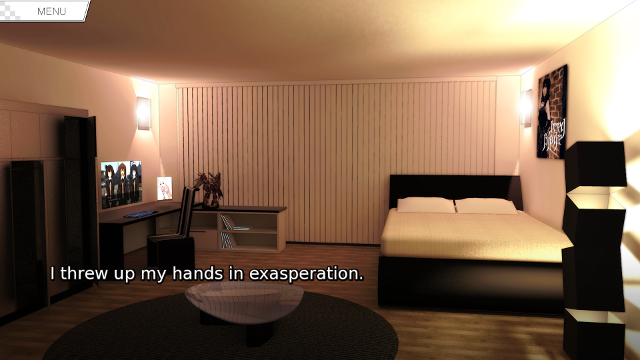 Let me paint you a situation picture. We are currently in the bedroom of one Kayto Shields, white-haired pretty boy high school student. Kayto has just suffered a frustrating loss in the video game he was playing, Sunrider: Mask of Arcadius, wherein he was controlling Space Commander Kayto Shields. Whether or not Space Commander Shields likes to unwind in his free time by playing a high school dating sim is unknown, but at this point I have to assume. 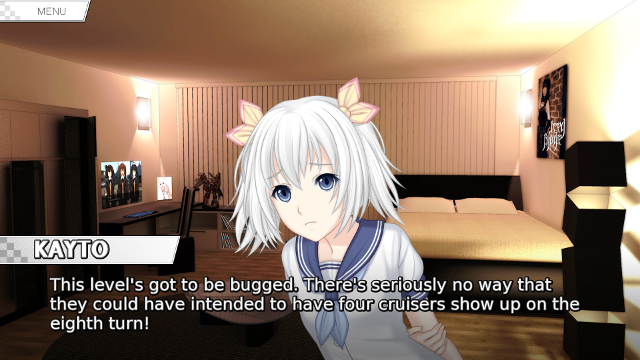 It *was* a pretty difficult game. 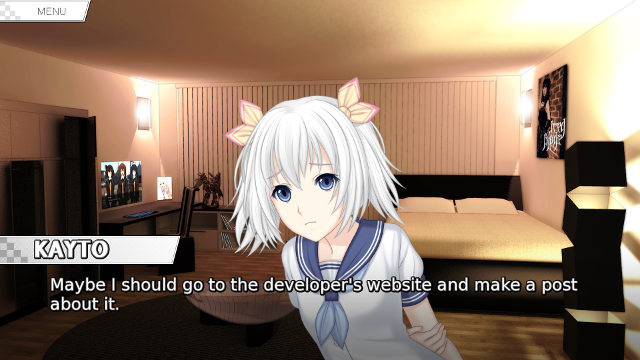 This is particularly funny if you know that one of the Mask of Arcadius developers came to Ninja Blues after my previous reviews to post about balance.

Maray and Kayto have a one-sided chat, that’s mostly Maray accusing Kayto of pissing away his winter study break on terrible, unbalanced, nonsensical video games. He hasn’t done his study work, he hasn’t picked up his new uniform yet. He doesn’t even have a girlfriend yet!

In a few inscrutable leaps of logic, this leads to Kayto and Maray wagering that Kayto can get a girlfriend by the end of the year. 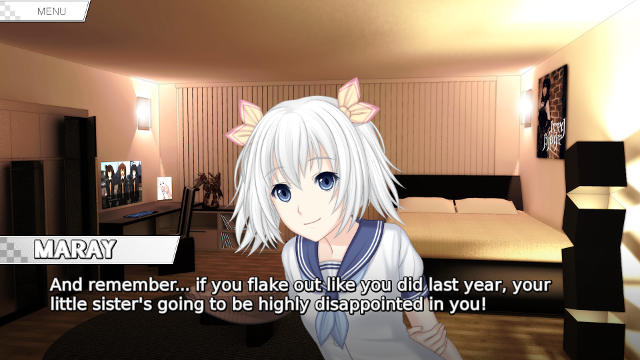 It’s not even a ‘wager’, per se. She just smack-talked him until he yelled that it’d be easy, and then pressured him into ‘agreeing’ — to nothing.

Maray leaves, and Kayto reminisces. He’s a student at the prestigious Sunrider Academy, title drop, and just being accepted at that place is a big honor. But it’s not easy for him! All Kayto really has going for him is… 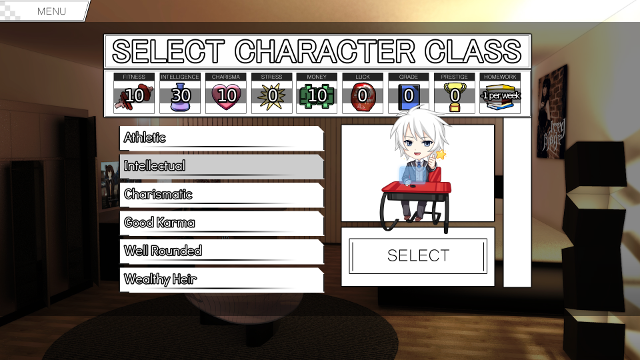 I have no idea what most of these stats mean. But sure, let’s be smart.

Then, a clunky tutorial pops up. 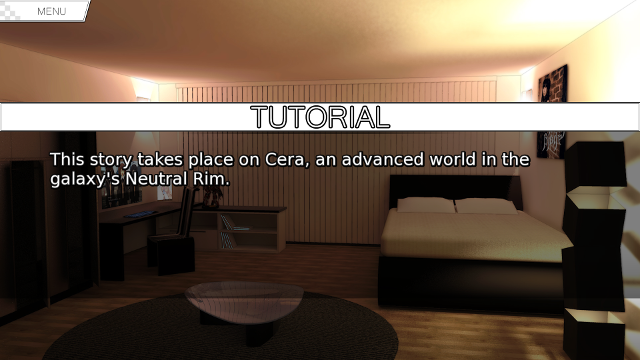 I learn three things from this tutorial. One, Sunrider Academy hasn’t entirely left behind Mask of Arcadius‘ space theme. It’s a high school game, sure, but it’s a high school on a fancy future colonized planet! They’ve probably got like, laser guns and stuff. Maybe even a hoverboard!

Two, Sunrider Academy is at least in part a ‘time management’ style visual novel / dating sim. Kayto’s gotta make the best out of his school days to get strong, smart, and likeable. And maybe rich. And lucky? Listen, I don’t understand how this works. All I know if this: There are hours, days, weeks, and months, and I’m to steer Kayto through a couple of the latter without failing him too hard. Letting him sleep at least four hours a day, which honestly feels like a major deficit. And maybe picking up a girlfriend in the meantime.

Except it’s not really ‘a couple’. Because three: on this space planet, time is space weird: each day has ten hours, each week has ten days, each month has five weeks, and each year has ten months. 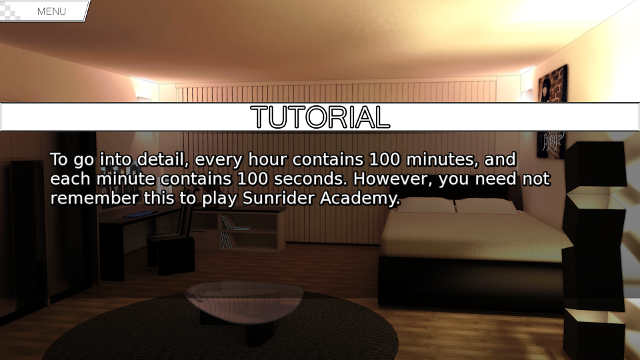 It goes that way for a while, up and down, but thankfully the game is merciful.

So if I’m playing for a full year, that means… hold on, let me run some calculations. 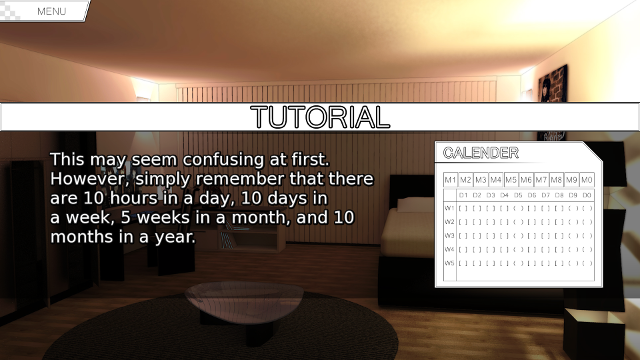 I might not be able to finis this game in review time after all.

But of course, it won’t be that bad. For one, I don’t have to control all of Kayto’s hours quite that strictly. Some hours are pre-assigned for sleep. Or school! In fact, let’s go to school now!

I meet a happy friend outside the apartment as I non-interactively steer Kayto to school. In Sunrider: Mask of Arcadius, this was the character Ava, operational commander of the flagship and main voice provider for all events and notifications. In this game, she’s… 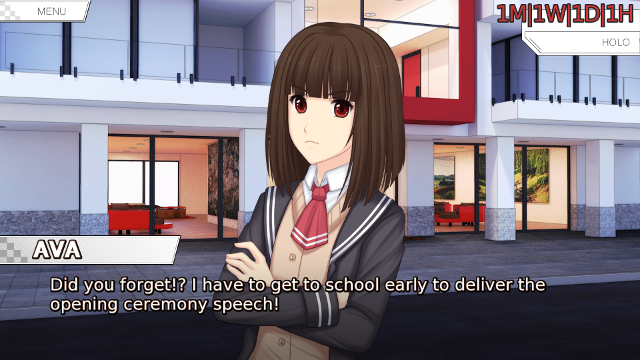 …essentially the same character. Except no voice lines, this time.

Do you want some more narrative background? I think you want some more narrative background. This is Ava Crescentia, Kayto’s childhood friend. She’s cold, aloof, bitter, and derives enjoyment from outsmarting people she considers ‘lesser minds’, such as Kayto. From that description, you might wonder why the two are friends in the first place. This is a good question.

Ava is also a high-performing student, and in fact is the president of the student council this year. Big responsibility, lots of work and care. It’s common for such a president to delegate some of those responsibilities to a vice president, who then independently takes care of one or several aspects of school life. The vice president position is equally fraught with hard work and opposition, so only the most serious, most devoted students should ever be considered for this heavy responsibility. 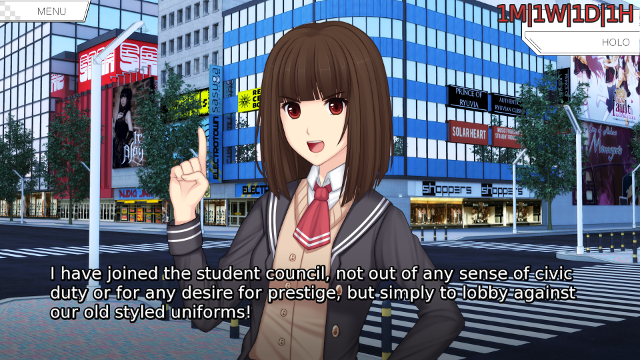 Anyway, you can probably see where this is going. 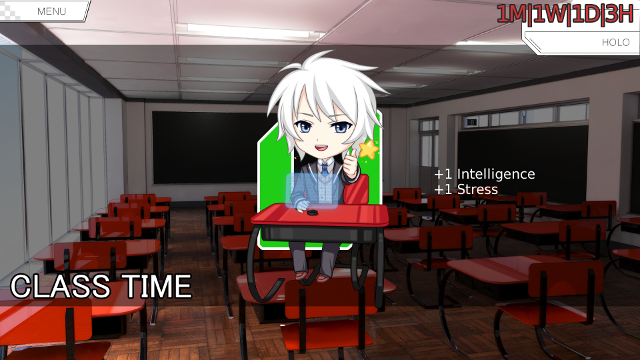 Yeah! I don’t know what this signifies! 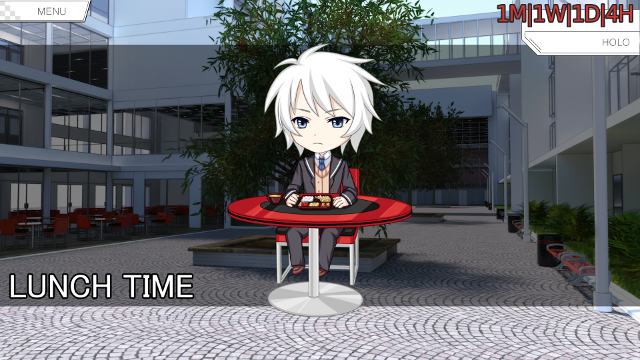 Followed by lunch time, which is followed by more class time.

Followed by… club time? I know Japanese high schools are big on clubs. Is that a thing we’re doing? Well, it is and it isn’t. See, there are three clubs in Sunrider Academy that are… let’s say struggling. They don’t attract new members, they don’t report on time, they don’t even pay membership dues! I know, right. Madness. Ava wants this dealt with, ASAP. Guess who gets to do the actual dealing?

First up, the kendo club. This one is overseen by… 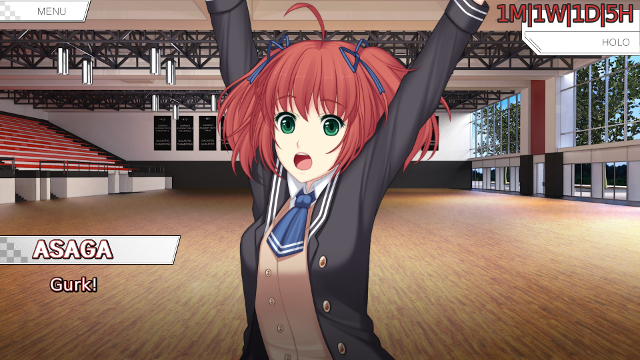 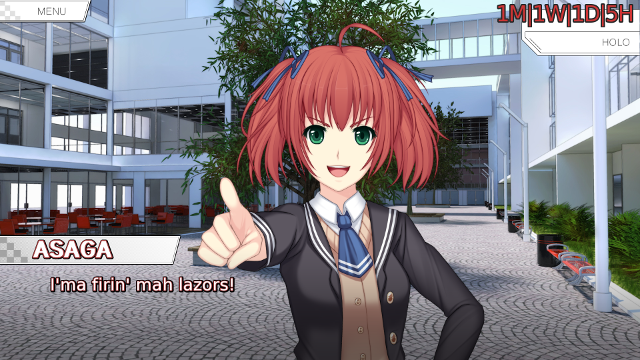 Kayto confronts Asaga about her club’s missing dues. Needless to say, shenanigans ensue. I’m talking about running-around-campus, being-attacked-by-angry-birds kind of nonsense. But at the end of an eventful hour, Asaga has more or less been brought into line. I, the player, obviously had to hand in all this — it’s been a single-file kind of opening so far.

The second club is the science club. I think I know which character that is connected to… 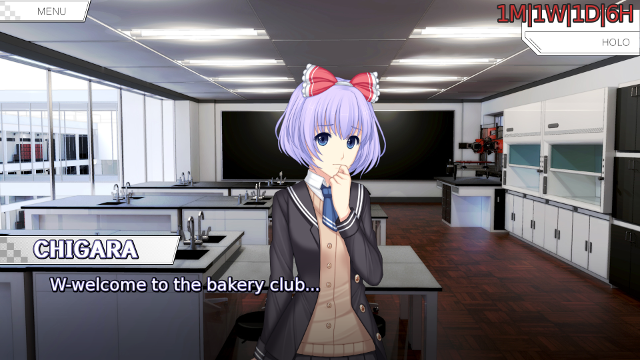 Chigara’s science club is low on members. Which is to say, it has one member, while the minimum membership total is five. And that one member is Chigara, who’d really rather be baking. But okay, fine. We can solve this, at some point in the future. Just gotta… recruit new members. However that happens. We’ll table that along with ‘get a non-functioning kendo club to cough up six hundred credits’.

And finally, the swim club. I honestly wonder who runs that. Maybe the black-haired tsundere lady that tried to kill Previous Kayto that one time? 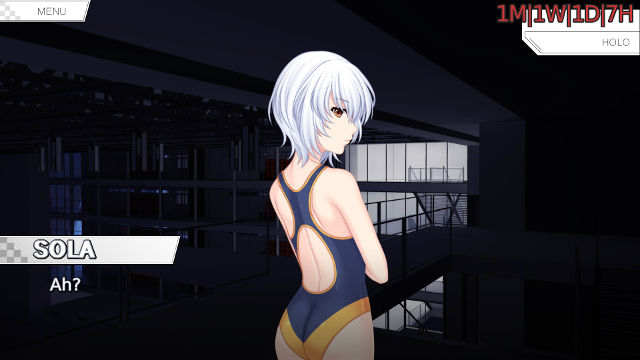 The swim club has members, and it’s good on its dues. It’s just way behind on applicable paperwork, because club president Sola gets tuned out of reality every now and again — just now, she was preparing to high-dive into an empty swimming pool. So that might be a challenge, at some point.

Three clubs, three sets of problems. How do I fix? The answer is ‘character activities’! From the second day onward, I can actually choose what Kayto does during parts of the day. Class, lunch, and more class are set, but after class there’s one hour where I can try to boost any of the clubs on their three important stats: readiness (which I boost by ‘overseeing practice’), membership (which I boost via recruitment drive), and morale (which I boost by… cheering them on, I guess?). 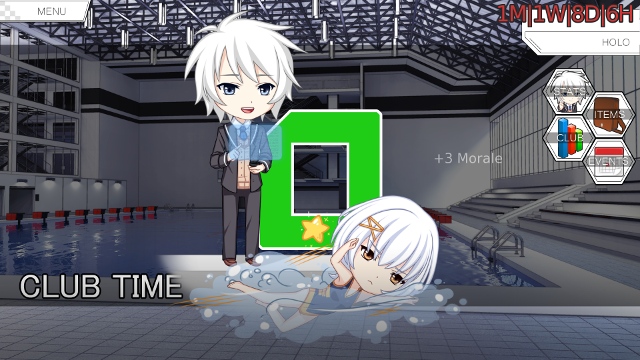 I’m sure it makes sense in some context or another.

The whole club thing isn’t just for diversion, though. Sunrider Academy is quick to warn me that failure to adhere to a large, ever-shifting set of conditions can lead to a ‘Bad End’. For instance, failing to get all three clubs up to five members before the end of the week. Or letting my grades fall too far, by not studying and doing my homework. Or getting too stressed out or too sick. Or, or, or… 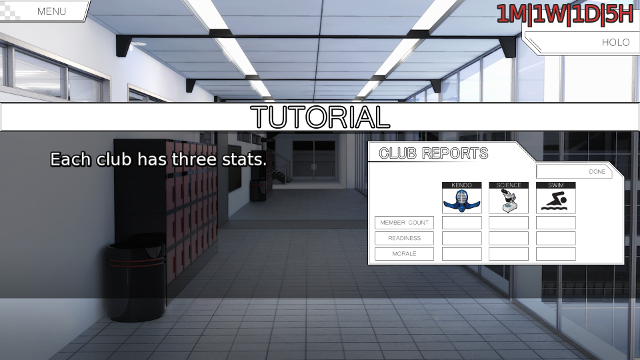 Which club will I fail in which way first?