Okay, so. I have good news and bad news.

The good news is that very shortly after I stopped writing the last page, Soul Axiom does indeed gain something that could generously be called an overarching structure. After acquiring a neat, time-related second hand power… 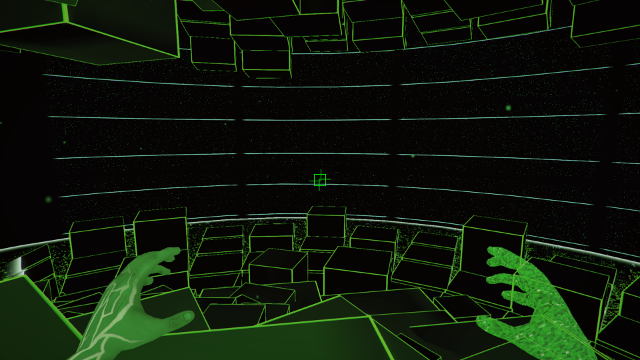 …from the Green And Black Cubes Zone…

…the game takes you a single path upward the giant area-dominating tower. The Soul Calibration Spire or whatnot. If I’m getting this correctly, and there’s a significant chance that I’m not, that tower contains a collection of memories. Your memories? Someone else’s memories? Your guess is as good as mine. But the only way to repair the way up the tower — which presumably leads to that aforementioned eternal computer bliss — is by visiting and replaying these memories. In game terms, that translates to playing about a dozen discrete puzzle levels, teleporting into a starting point and working your way towards finding the level’s resident smoky shadow corpse, and extracting a grainy, low-quality FMV from it. 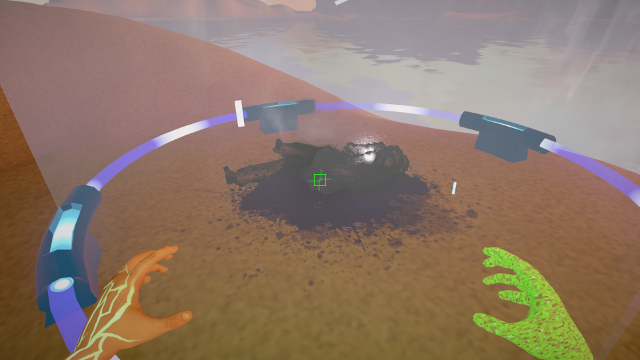 Pictured: a shadow corpse, surrounded by its Plot Barrier. 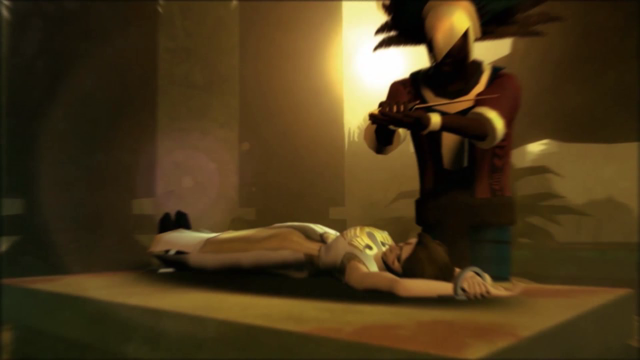 So, a mechanical structure is made apparent, and something appears in the distance that might resemble an end goal. That’s the good news. It’s not much, but it’s what we have. Were I feeling charitable, I might even say that this could be an interesting set-up: reliving memories from your past in order to settle your affairs and ascend into digi-heaven, or whatever is really going on here. The bad news is that Soul Axiom doesn’t fulfill on this promise at all. My play-by-play on the previous page makes it sound like a vague, directionless, confused, and incoherent mess, and I can tell you in advance that this page isn’t going to be much different.

‘Jeeze, Jarenth, tell us how you really feel.’ Yeah, sorry. I’d be more amenable to being nice if I hadn’t spent several previous hours of my life trying to make sense of this garbled nonsense game. Really trying! But I realized around the three-hour mark that I had cognitively checked out a long time ago: I was playing Soul Axiom strictly in order to ‘make progress’, relying on a backup podcast to alleviate its mostly tedious gameplay, its repetitive puzzling, and its continued insistence on not telling me anything of meaningful narrative value. 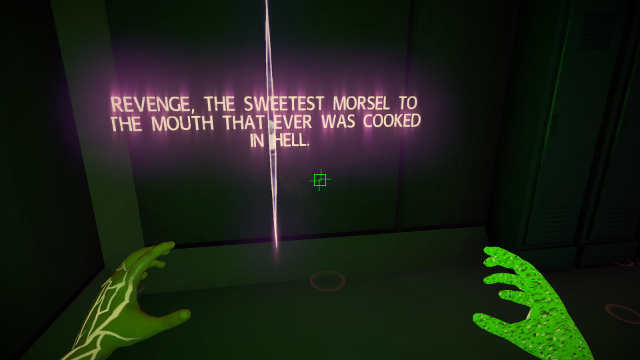 I might be a little bitter, is what I’m saying.

I don’t even know how to talk about this. Every point of criticism I want to bring up needs insight into Soul Axiom‘s other flaws; they all feed into each other, like a Moebius strip of poor design choices. Where do I start? The complete lack of thematic coherence? The slapdash nature of the hand powers and the puzzles? The absence of player guidance? The constantly-changing graphical styles? The voice work?

Soul Axiom comes across really strongly as a Game Design Master’s project. Not a solo project, but a group project. The kind with mandatory group assignments, where nobody in the group is really keen on working together. So, at the first meeting, everybody just divides tasks discretely. Anne is in charge of level design, Benny is in charge of gameplay systems, Cybil is in charge of story writing, Daniel is in charge of world building. And so on, and so forth. And then they get together twice a month, begrudgingly, to incorporate everything everyone’s made into the final product. Whether it fits or not.

Anne: Alright, everyone, I’ll start. I made a really cool spaceship level this week, lots of red lighting and narrow metal corridors. And there’s this really cool cryo pod section, I found good assets for that o-

Benny: Did you say ‘spaceship’? Didn’t you make that gothic werewolf castle last week? And an Aztec jungle before that? And that military helicopter base?

Anne: So? I wanted to make a spaceship.

Daniel: That’s no problem. I drafted that central level hub, remember? They’re all memories you go through anyway. As long as we can tie it into the Elysia stuff.

Cybil: Sigh. Sure, fine. I thought we were doing like contemporary sci-fi, but I guess I can make it work. I had this alien invasion storyline idea I wanted to work on anyway. I was thinking how cool it’d be if, like, Earth was destroyed, but humanity managed to survive because they all uploaded their souls to a spaceship computer… 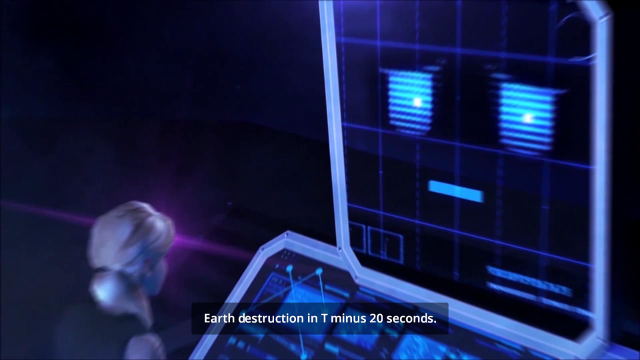 ‘Jarenth, how much of this is based on actual game stuff?’ All of it.

Benny: Yeah, yeah, nobody cares. Look at this power I made! It lets the player charge fire bullets on their hands and then blast nearby objects.

Daniel: Fire bullets? I thought we agreed there weren’t gonna be any NPCs?

Benny: Yeah, but it’s for physics puzzles and stuff.

Anne: Wait, you want to do physics puzzles? Our engine doesn’t support physics!

Cybil: Wait, no NPCs? But I spent all weekend writing dialogue for the corrupted nemesis character! 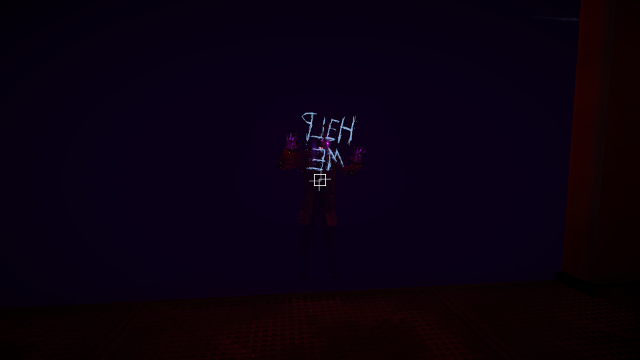 Long story short, they ended up doing a corruption thing.

And so on, and so forth. You get my point. So much of Soul Axiom feel devoid of any kind of coherence: world coherence, thematic coherence, mechanical coherence. Memory levels exist in a vacuum, only ever tangentially connected to what vaguely passes as the ‘main storyline’. Audiovisual styles and qualities switch almost between scenes. The various levels do share mechanical conceits, in that they contain simple puzzles — mostly of the ‘hidden object hunt’ and ‘push the correct buttons’ varieties — and areas where you have to use your hand powers to proceed. But even here, there’s no coherence: the powers only ever let you do the specific things that the designers intended for you to do in that one area. So, in one level, the blast power starts fires. In another area, it breaks wooden planks. In yet a third area, it ‘activates’ giant floating ice medallions, casting their zodiac signs to the sky for the purposes of a single puzzle. 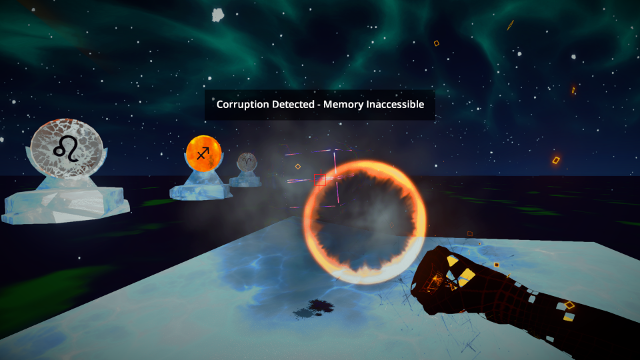 No, I didn’t miss a description line there.

It’s a mess. It really is. Or more accurately, it’s a pile: a pile of levels and themes and ideas that seem to have been thrown together for the hell of it. But sadly, it turns out that game levels and mechanics don’t follow Katamari Damacy rules.

It’s not all bad. That’s probably the saddest part about Soul Axiom: it’s not all bad. Hidden inside the mess are some genuinely neat and clever ideas. I honestly kind of like the subtle narrative: players can search levels for organ grinder monkey toys to slowly learn more about the level background. After playing enough levels, a potentially interesting character-driven meta-narrative starts to take shape, tracking the influence of four major players — the soldier, the actor, the doctor, and the scientist — on the development of this digital soul system that still purports to serve as the Soul Axiom backdrop. And some individual levels are just nice. I particularly enjoyed the time travel apartment’s puzzle bits, the werewolf castle was visually well-designed, and the spooky abandoned hospital got more than one rise out of me. 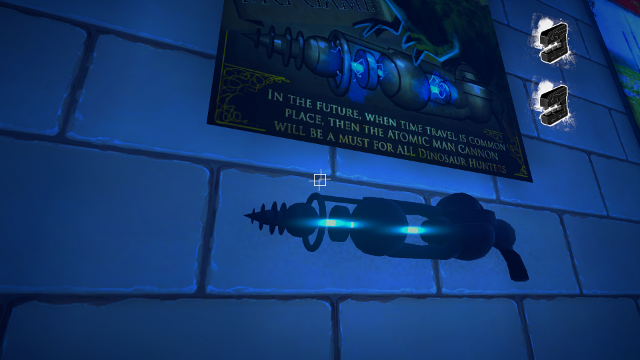 This B-movie museum had some cool writing and world-building, too.

There is just enough of a spark glittering inside Soul Axiom that I really want to like it. I’ve played it for hours, hoping against hope that it… pulls together, somehow. That all the disjointed levels and the repetitive fetch-quest puzzles and the growing sensation of alienation could all be swept away by a strong endgame, maybe a meaningful finale. It wouldn’t make the previous hours better, per se, but I can forgive a lot of past sins with good recontextualization.

But then that didn’t happen. I played through twelve whole memory-levels, each one longer and more involved and not necessarily any more exciting than the last. Because the game suggested, in very clear visual cues, that that was supposed to be that. And then I played the final level, and it had all the makings of a giant, final puzzle arena, an application of all previously gotten skills and knowledge…

…and then I just got a new power.

And then Soul Axiom told me that, hey, remember those weird purple cubes you sometimes saw, that you couldn’t do anything with? Surprise! You get to go back into each level, playing from the start, to find these well-hidden cubes. Every level. You thought these would be optional, but the final plot door demands otherwise. 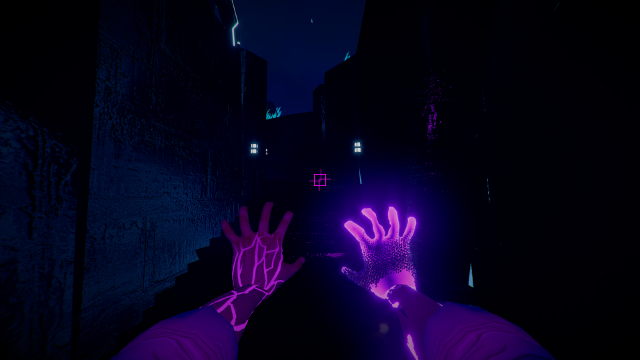 Suffice it to say I wasn’t too enamored with that idea.

At the absolute most charitable I can be, Soul Axiom is occasionally interesting. It has a few good ideas: neat settings, cool level-influencing mechanics, and some fun puzzles. It also has a lot of not-good ideas, ranging from the merely mediocre to the decidedly dull. And playing Soul Axiom is like playing roulette with that pile: once every now and again you’ll hit a good one for a fleeting endorphin high, but most of the time you should probably not except any return on your time and engagement investment.

Soul Axiom runs twenty dollars on Steam and other platforms. I don’t necessarily regret getting it, but then during play I’m easily able to laser-focus on the good and tune out the bad. If that sounds like you as well, then, you know. There are nuggets. But if you have a more traditionally holistic experience pattern — i.e. if the bad parts of a game tend to drag down and drown the good — you probably want to steer far away from Soul Axiom‘s disjointed sometimes-food.

Jarenth might still try to finish this game. Or maybe he’ll uninstall it forever after posting this review. Cast your suggestion votes on Twitter or hang out with him on Steam. And if you dig Indie Wonderland and Ninja Blues in general, why not consider supporting our Patreon campaign?