Video games and their naming schemas, I swear. What in the devil is a ‘Soul Axiom’? I know what an axiom is — in science and logic, at least, an axiom is a rule taken to be self-evident. And I get the concept of a soul. But ‘soul axiom’? Those are just two nouns! You can’t words that way! What does it even mean? Are we talking about an axiom that is soul-related? A soul that proves itself by virtue of definition? A clever play on ‘sole axiom’? And why am I rambling about this so much?

The reason for rambling, of course, is that last week I bought Wales Interactive‘s Soul Axiom on a Steam Sale-induced whim. I don’t even remember if I ever heard of it before. It was bundled with one Master Reboot, the studio’s previous work, which I think I’m continually confusing for Hard Reset. But impulse purchase is as impulse purchase does. I figured, worst case scenario, I’m out ten bucks. And best case scenario, I get something interesting to write about! The fact that this review exists should probably give you a clue as to what the outcome of that particular gamble was. But in order to respect the purported timeline of the Indie Wonderland format — at this point in narrative time I ‘haven’t played the game yet’, remember — demands that I say here:

Let’s find out which one Soul Axiom is together.

(Game source: Bought it myself; I prefer to save Patreon funds for games I’m sure I’ll review, instead of blind guesses like this. I’m Dutch, we’re frugal like that.)

A title screen can say a lot about a game. I know that this format I use here, the Indie Wonderland Style, isn’t particularly standard fare: I spend much more time babbling about titles and options and cool credits screens and whatnot than most people realistically care — if this was really an untapped market demographic I ought to be rich by now. But I do this because a game’s opening is its first impression. A good intro and a good title can do so much to draw a player in. I’ve lost count of the times a good title screen managed to enthrall, the subtle cadence of graphics and style and background music, and in doing so dispelled any lingering doubt and solidified my cautious initial hype into strong positive affect. A good title makes me want to like a game. 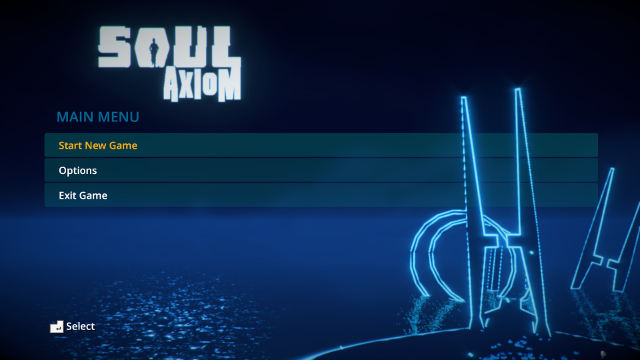 This is not a commentary on the state of the options, which are fine. Fairly good, particularly in comparison to other games I reviewed this month. Audio, gameplay, mouse and keyboard, controller, graphics, advanced graphics… They’ve got VSync settings I haven’t even ever heard of! 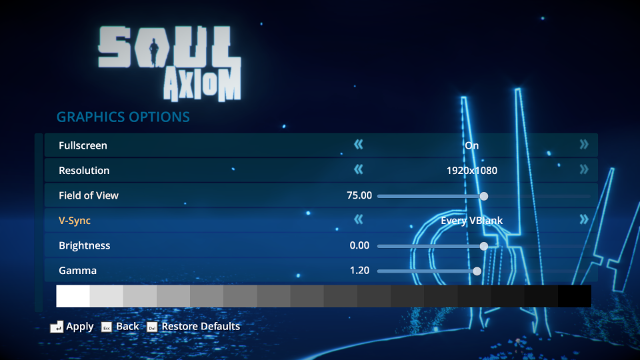 I don’t know what this means! I don’t even know *if* it means!

It’s just too bad those nice options are set against a backdrop of Searing Blue and Apparent Area Of Low Developer Interest. But, fine, whatever. They say you never get a second chance to make a first impression, and that’s by and large true. But they also say that if later gameplay is good, that first impression doesn’t have to count for much in the grand scheme of things. Uh-huh, that so is the second part of that saying. 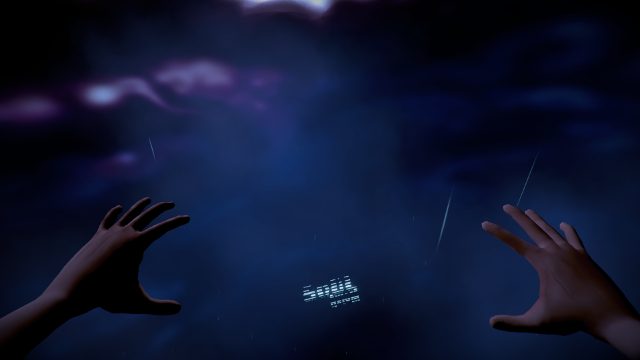 Wait, not that literally!

Soul Axiom opens on me falling through a vast sky. This is only the second time in memory a game has pulled this on me, and the previous one at least had the honesty to incorporate a reckless disregard for gravity in its title. It’s equal parts faux-exhilarating and confusing; the former because, well, video games, the latter because every so often my avatar falls through a holographic projection of the game’s name. 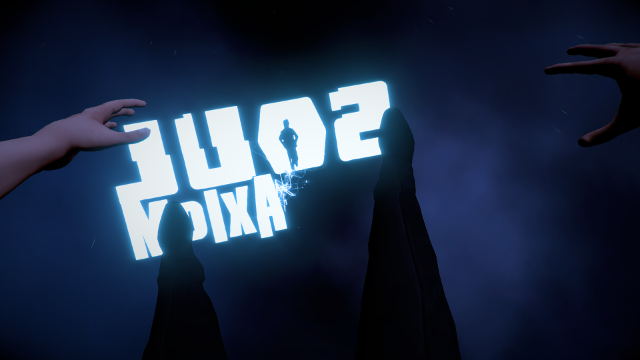 That hole in the title was totally there before I crashed through it.

I fall for about a minute through the most confusing storm sky imaginable. After the game titles, lightning storms start a vague shadow-play: here I see the silhouette of a soldier, there two people dancing. I have no idea what’s happening. The vague shadow of an angel looms closer through a distant cloud…

…and then I smack into an airship. 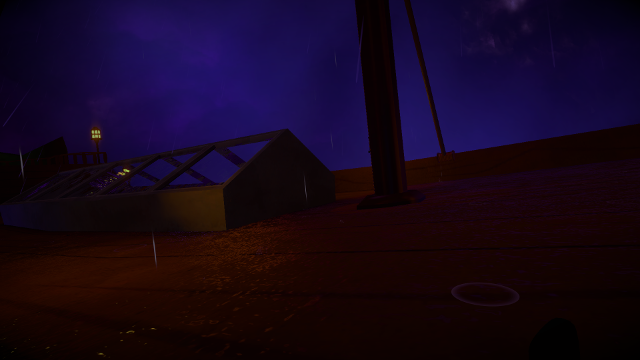 I still don’t know what’s happening, but fine. I appear to be fine; my avatar gets up and looks around no apparent worse for the wear, before standard FPS controls are passed to me. I also appear to be on a feature-poor airship in the middle of an empty dark blue storm sky, but I don’t even know if that’s here or there.

I look around. To the left, a mast and a cabin. In the sky, a swirling purple storm vortex. To the right, a strange glowing power hub of sorts, and the steering wheel. One white-haired man captains the ship, while vague shadowy silhouettes stand around motionlessly. Then lightning flashes again, my character averts their eyes, and when I look back again, all the people are gone. 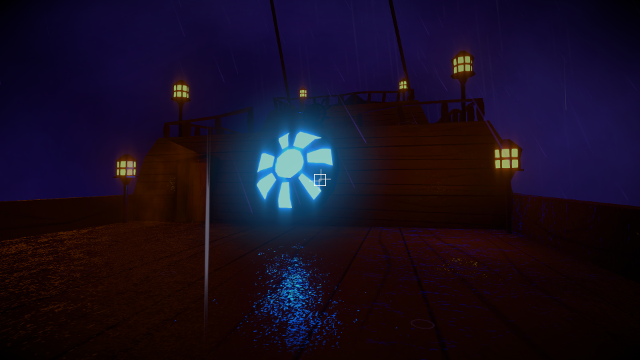 There were people right there! I swear! I’m not making this up as I go!

I walk around the ship. It takes me a while to find something to do, since nothing seems to respond to my interaction attempts and I technically don’t even know what I’m doing. But finally I find a route to inside the ship: hidden cleverly, as it would be, by the fact that the wood textures in the small hallway look almost indistinguishable from the wood textures of a flat wall.

I hope to find some more clarity inside the ship. 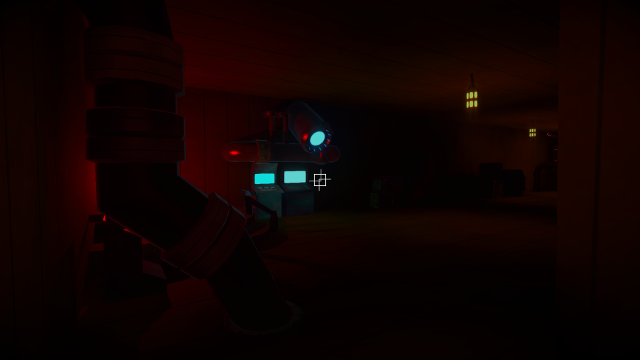 I am left disappointed.

The inside of the ship is more actively confusing, as compared to the outside’s passive confusion. There are… machines? And pipes, and crates, and gears. And a giant iridescent eye on a distant wall. 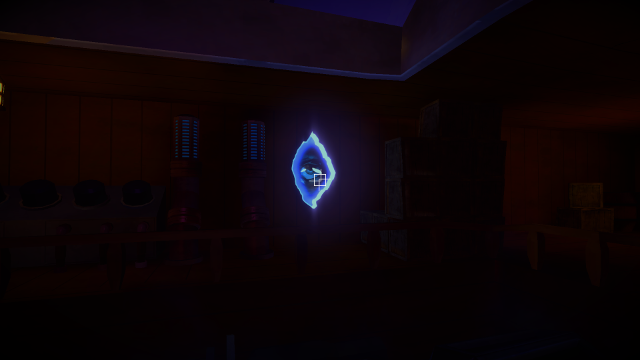 Sure, you know what? I’m actually okay not questioning this.

The ship’s bowels serve as a quick mini-tutorial of sorts. Press C to crouch underneath these pipes. Press E to interact with an obviously interesting machine, electrocuting yourself and returning power to the ship’s holo-sails. Press Space to jump over boxes. Press E near the giant eye to get some cryptic pseudo-poetry. 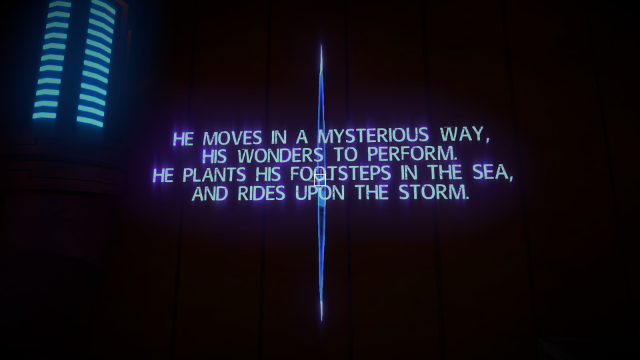 Rhyming ‘way’ and ‘sea’ is probably the worst thing I’ve seen in this game so far.

Then I climb the holo-ladder on the holo-mast, which obviously appeared once I turned the power on. Only to get knocked out and watch the ship get trashed by a giant angry angel. 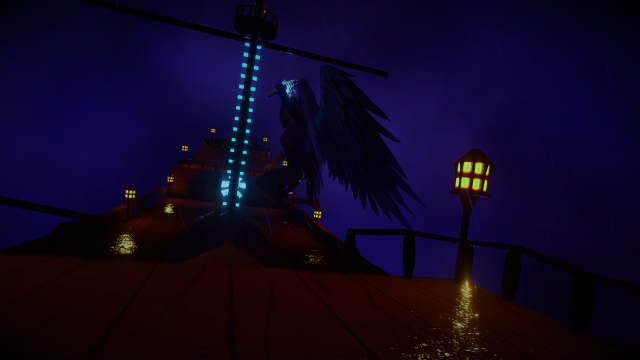 Am I… playing a mad libs visualizer?

So much happens in this game, in such quick succession. The ship crashes. There’s fire everywhere. Then I’m suddenly in some sort of cyberpunk cowboy desert, filled with Mass Effect 3 Green Ending-style techno-cacti. There’s a single bar in the distance, so I reluctantly walk there. I try to play an arcade machine and instead watch three people burning on office chairs. Out of nowhere, a red-black cube spawns into existence. So I pick it up, and then use it to power a teleportation device that brings me to Elysia. 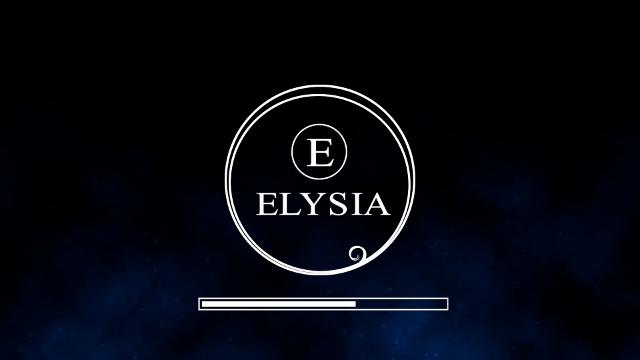 Or at least, it teleports me *somewhere*: the prompt ‘Press E: Teleport’ was unmistakable. I’m assuming I’m going to Elysia because of this loading screen.

‘What the hell, Jarenth? You didn’t tell us anything about the game just now! You’re making it sound like all you do walk around weird and interact with random shit.’

Ah, but we’re in luck! The teleportation screen drops me in a vague Mesoamerican-looking temple complex, and after only a little bit aimless walking around… 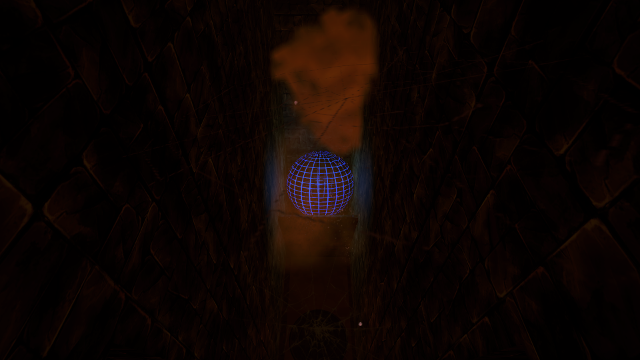 …which includes running for my life from this *cyber ball trap*.

…I finally reach something that approximates a meaningful gameplay mechanic.

One of Soul Axiom‘s back-of-the-Steam-box selling points is ‘find and use a variety of unique hand powers’. No, you’re right, that doesn’t at all look enticing. And I didn’t quite understand what it meant, at any rate. Hand powers, like… Bioshock. But in the depths of Unity Asset Store Flip Temple, I find a fancy skeletal glove. And when I touch it, my hands light up with bright blue power. And then disintegrate. 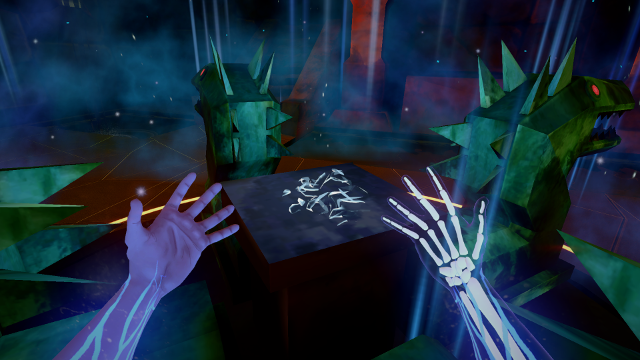 Well, one of them disintegrates. The other just gets veiny.

So now I have hand powers. You might think that a blue skeletal hand conveys powers of, say, necromancy. Or magic missiles. Or X-ray vision. But then you haven’t just played Soul Axiom for twenty highly confusing minutes. It wouldn’t feel right for this game, already, to use something as ‘pedestrian’ as straight-up magic attacks. No, with Soul Axiom‘s blue glowy hand, I can target seemingly solid objects… 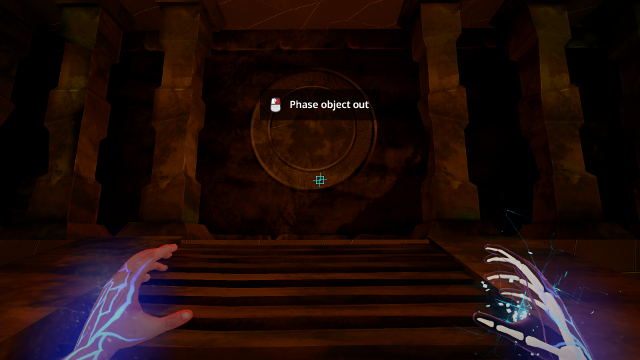 A fine wall, for all intents and purposes.

…and them shatter them into underlying grid lines. 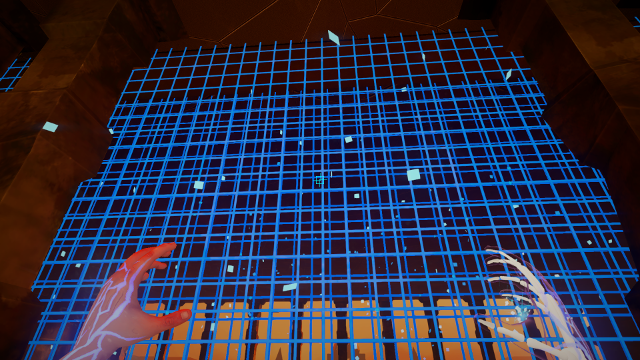 Or, more accurately, peel off the textures and leave the grid lines: the parts slowly cascade off, and flutter in the nearby breeze.

Say what you want, but at least it’s interesting. With my new powers, I blow a nearby wall into aether and walk out of the temple. Then, magnanimously, I reconstitute the wall as well: this hand of mine can restore as well as destroy.

Then I use my phasing powers to solve a simple pattern-matching puzzle that also involves ancient sun lasers. Doing so reveals another teleportation device, which brings me to a blue empty cliff. Here, I use my powers to shatter glowing crystals, then use the raw material to craft bridges to proceed. Then there’s an electricity puzzle, which leads me to a giant cathedral, where a purple man is torn apart by a giant angel… except he’s also not, and he’s still okay, and now there’s an Ourobouros, and….

Anyway, now I’m on a train! 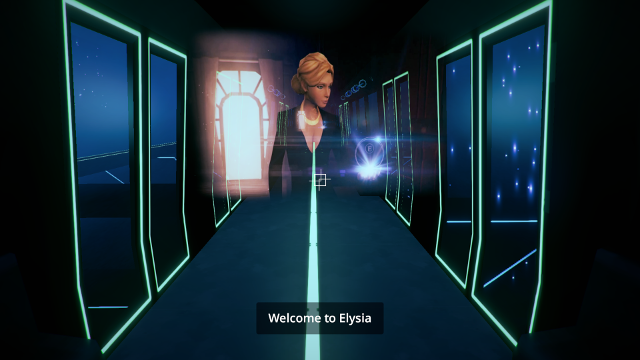 ‘Hey, remember how Half-Life 1 and 2 both used a train ride opening to quickly establish relevant facts and setting? We’ll do that to, except *our* train ride will happen about an hour after most players have already quit in frustrated confusion.

The train ride, for all its belated weirdness and stilted voice acting, at the very least manages to set a setting. It goes a little like this: we’re currently in Elysia, which is a big computer server that people upload their souls to. Somehow. Those souls are then used to create a big sprawling server based on everyone’s preferred memories, sort of like if EVE Online was built of daydreams and pseudoscience instead of space ships and treachery.

None of this still directly applies to me, mind. It could be? It’s a sales pitch. But all the same, I have some direction: if I follow the clearly-indicated path, I’ll find something called a SoulSync Calibration Unit, which — I assume — will let me upload my mind to the eternal memory paradise Elysia and live in perfect happiness forever. Just gotta follow the glowing path on the ground, and hope that the enraged angel that’s been following me around since I woke up doesn’t mess this up for me. 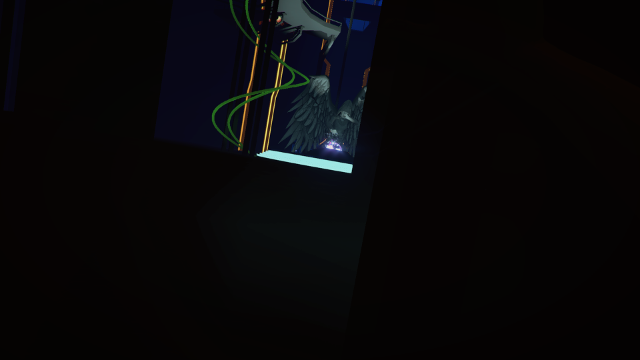 Hey, would you look at that unexpected thing.

I still don’t know what I’m doing. I know how to navigate Soul Axiom‘s world space and I know how to work my hand power, but I don’t actually know what I’m doing. Or why. Please believe me when I say that I’m not playing this confusion up for effect! I’ve been playing for half an hour at this point, and I still can’t tell you more about what Soul Axiom is or why it’s making me do what I do than by just repeating all my actions verbatim. I went here, I jumped there, I did the thing. I don’t know why. I can’t imagine that makes for an engaging review, and I don’t see it ending any time soon.