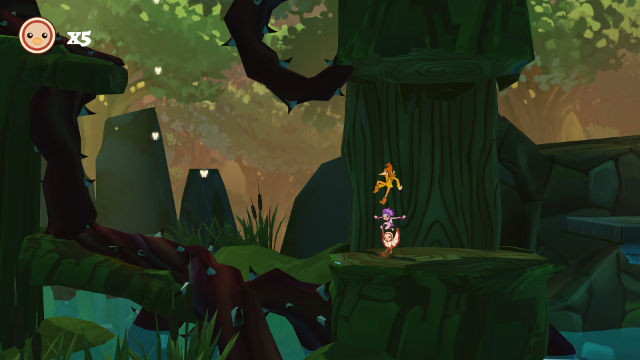 I made new friends!

It turns out that the least interesting one of my three predictions was actually the correct one. I garnered another two friends in the second set of levels, The Angry Misty Woods Of I Can’t Even Pretend To Still Remember The Name. Neat set of levels in and by itself, that. Visually very distinct from the pelican town bluffs’ predominantly yellow-brown and light blue colour palette: the woods are dark greens and purples, oppressive gloomy foliage, spiked tentacles and deadly water everywhere. This would have been a lot less fun to navigate without my new friends’ new song powers. 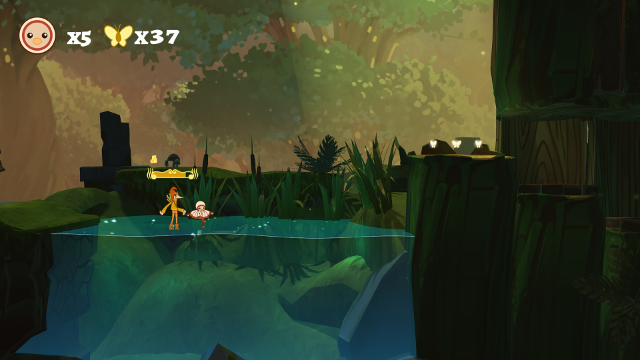 I’ll give you this one as an example, but let’s keep the rest a secret — just in case you want to check them out yourself.

The second world ended with another storm-run, another song-shield, and the very same balloon whisking my helpers to ‘safety’. And the same pattern repeated in world 3’s reddish tall mountains, world 4’s snowy peaks, and world 5’s futuristic geometric-techno city. Then there was a brief one-level reprise of all powers at the end, and that was that. 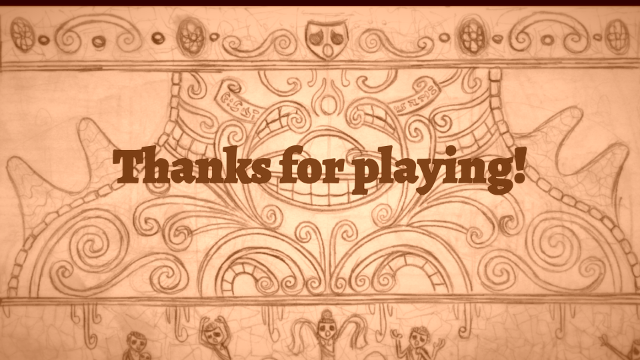 If you’re thinking it sounds like Shu isn’t a very long game, you’re right. Even though the individual levels can be pretty lengthy (or at least, lengthy-feeling, with 15-20 minutes per level being the rule rather than the exception), sixteen levels still ‘only’ adds up to four hours or so. And it’s probably less; there are shorter levels, particularly the storm-driven ones, which sort of shift the focus from let’s explore every nook and cranny to run oh god run for the exit.

But play time alone is a shitty metric for any game, we all know that. And it’s clear from the outset that Shu focuses on replayability, in multiple ways: not only does it have speedrunning functionality and time-driven leaderboards, but there are rewards for finding each and every doodad in a level, and some levels are (seemingly?) laid out such that you have to play through them twice to be able to get everything. 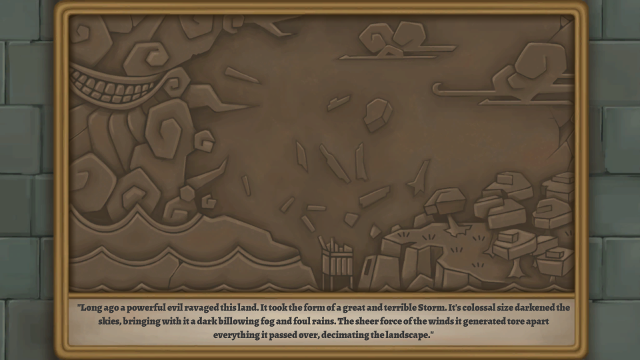 Potential rewards for getting everything include: some actual backstory!

The question then shifts to ‘is Shu a fun enough game to encourage completionist collection drives and leaderboard speed-running?’ And to that, my answer is… well, it’s the aforementioned ‘eh’.

Shu is… it’s a competent game, no doubt. It works as a platformer, once you get past the minor hurdle where the controls are never actually explained. It inputs fairly well, with my attributing only a small handful of my deaths to the game instead of my own fuck-ups. It draws the player through the level nicely with the use of butterfly trails and obstacles, and often presents clear — or not-so-clear — side paths to explore for collectibles and fun and profit. It’s relatively generous in its save points, even if some challenging puzzles are a bit too back-to-back for my liking — and collectibles aren’t saved when you die, so if you completed a hard segment to save a baby and then died before reaching the next bell, I hope you’re looking forward to doing that over again. But otherwise: fairly generous. And when the storm encroaches, the tonal shift is done with the sudden violent shock it deserves: blam, thunderclap, now you’re running for your life.

But all those good points aside, Shu is really just kind of bland. 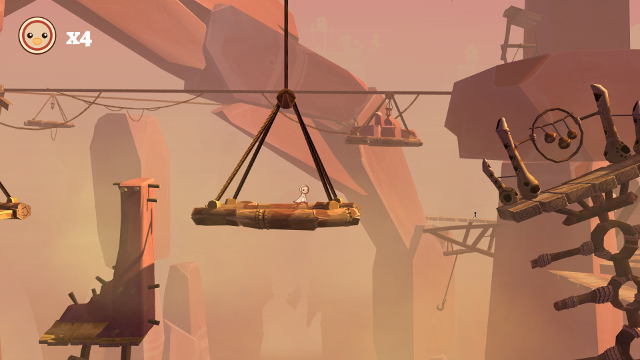 The thing about Shu is, all that stuff I described above, those are all good ideas. Or decent ideas, or mediocre ideas, depending on your personal tolerance. The point is that in concept, they all work fine. But Shu is just not very great at putting these things into practice. It’s all there, sure enough, it’s just… disappointingly so.

It starts with the core ideas. Shu is a platformer built around jumping pits, navigating spikes, and working physics puzzles. But the jumping feels floaty, the spike hit boxes are hard to parse, and the physics puzzles never transcend the level of gimmick — see-saws, mostly, that move only a tiny little bit. Shu encourages exploration and collectible-hunting, which works fine most of the time — but then some collectibles are hidden behind seeming background objects, and some collectibles are hidden behind one path of a road fork, and if you take the wrong one you’ll be locked into it, unless you choose to die, or reset. Shu whiffs its controls explanation in a frankly terrible way: I was joking about it before, but this is really a masterclass on How Not To Do It In 2016 And Beyond. And the storm sections… I don’t know, I like them as a concept. They remind me of the Dahaka chase sequences of Prince of Persia: Warrior Within, easily the best parts of that game. You’d just be going about your business and them BAM! Struggle for life and death. And the storm sequences of Shu manage to evoke that feeling in the best of times. But they share a similar weakness to the Dahaka, and to any game element that relies on a high-stress demand of flawlessness: once you fail, and inevitable get reset to a previous checkpoint, the pressure is just off. Lessened, at the very least. It’s hard to feel terror for something twice. 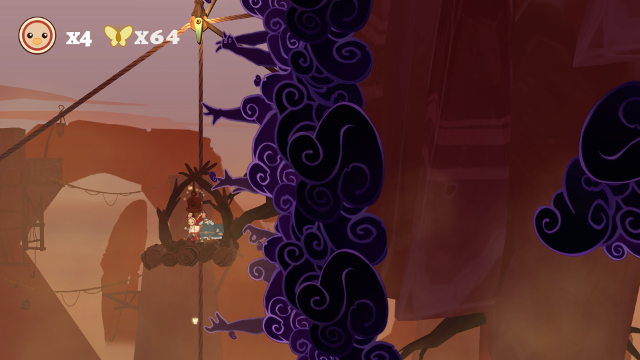 It tries, though! It really tries. And it’s all well and cool as long as it gets it right. You’ll never catch me saying I had *no* fun with this game.

Now, I think that Shu‘s system of bird friend powers had great potential to build on this somewhat-mediocre basis. If it was played as a gradual increase in power, Metroidvania-style, you’d have had the enjoyment of a gradually growing power curve. This probably would’ve demanded different levels, and some of the more situational powers might’ve felt gimmicky after their moment had passed. But still: could have been fun. Or maybe it could have been played as a choose-your-own-layout thing. Can you imagine? ‘Which platforming powers do you want to take into this level’. That could have really played into the multiple-path collectible hunt that Shu espouses. Good for (enforced) replayability, too. Maybe design the puzzles so that several movement powers can be used to get by them…

Sadly, the approach Shu opted for is nothing that interesting: you simply ‘get’ two particular powers per level, tuned towards that level, and you lose them again at the end. 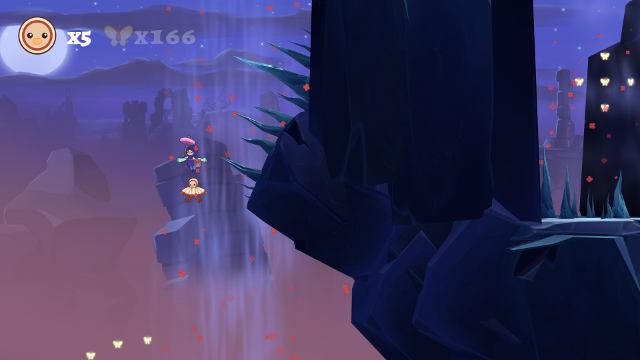 Wee! This is great! I wish I could do this forever, but I know I can’t.

Making the powers level-specific turns Shu from a large game with a possibly-interesting power curve into (essentially) a disjointed series of mini-platformers. This is the world where you get the ground pound and the flower power. This is the world where you walk on water. This is the world where you double-jump. And since none of them are related, this precludes gaining meaningful mastery over time. There is no mastery to gain! Well, except Shu’s basic movement set of run, jump, and glide, which you probably mastered near the end of the very first level. For the rest, the skill sets of the other powers don’t tie into each other to any meaningful degree. So it’s three levels of learning where to quickly ground-pound and what the right rhythm of flower deployment is… and then it’s gone.

The resulting experience is… I said ‘bland’, at first, but it’s more like flat. Hurting for a climax. Which there cannot ever be, because the game resets its stakes and mechanical mastery arc every three levels. Later levels literally cannot build on previously established skills and knowledge, because that basis gets swept away before the switch is made. You could argue that the end-of-world storm sections are meant as mini-climaxes to test your skills on your current powers, and they’re probably intended that way. But that feeling never gets conveyed. It’s just… a normal level, except you have a spooky time limit. 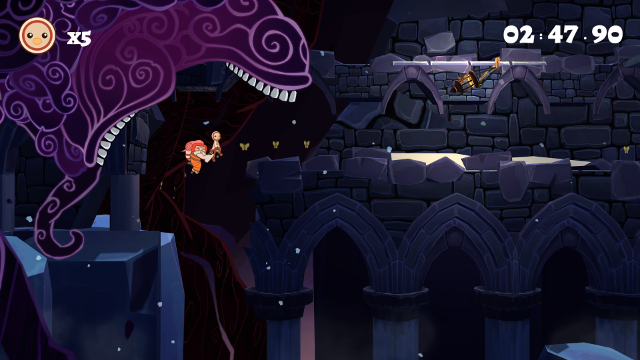 So the short mechanical mastery arcs conclude very quickly, which does the overall experience no favors. And inversely, the individual levels themselves almost can’t help but feel bland. They’ve got so little time to work! Platformers that work on mechanical mastery (think of Super Meat Boy) generally give you a lot of time and repetition to actually master the subject matter. And then they expand on that, and let you learn the new thing. And then another thing. And so on, and so forth. In contrast, any given power in Shu only has at maximum three levels to shine. That’s hardly enough to conclusively establish meaningful mastery, let alone introduce interesting variations.

You know what this reminds me of? The Double Fine game The Cave. If you haven’t played it, The Cave‘s gist was basically that you selected three out of seven characters, each with one unique power, and then ran them through a cave system consisting of seven potential levels — three of which you’d actually play, based on your three characters. It was a fun idea in theory, but I felt it was let down by (among other things) a sense of shallow repetition. While the idea of character power combinations was neat, the modular nature of the titular cave meant that the game could never rely on you having any power at any time — except in the character-specific levels. So the Knight’s invincible shield would only be called on in the Knight’s level, for instance. And you’d only ever find gates that the Twins could bypass in their level. And so on, and so forth, again. It felt like a bland pick-and-match: choose what you want, and we’ll make it work! Just at the expense of making the experience feel meaningful.

That’s also what Shu feels like. The levels don’t feel meaningful. Every level is the absolute bare-bones implementation of whatever power of powers the player can have at that moment; it can’t do clever combinations, because those combinations don’t exist, and it can’t test the player’s skill in any given power too strenuously, because that power’ll be gone in two more levels anyway. The result feels like a drawn-out combination of first and second levels of better games. I’d love to see any of those, any particular world and power combination, extended into a full three-to-four hour game sequence! Add some more complicated puzzles, maybe modulate the powers over time a little bit. It wouldn’t have been groundbreaking, but it would at least have been fun.

Shu, for all its pretty graphics and its half-implemented clever ideas, very rarely feels like fun. It mostly feels like it’s not finished yet. 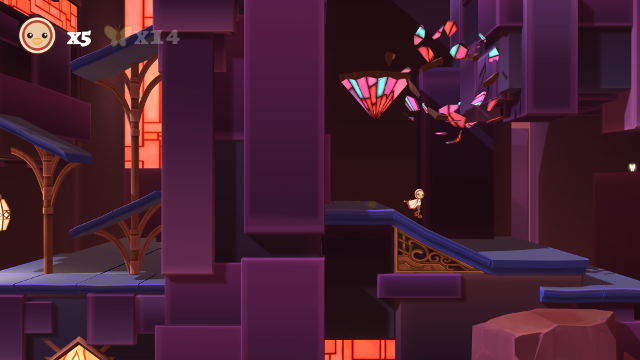 The graphics *are* pretty, though.

Do you guys think ‘Sotolotl’ would agree with my analysis here? 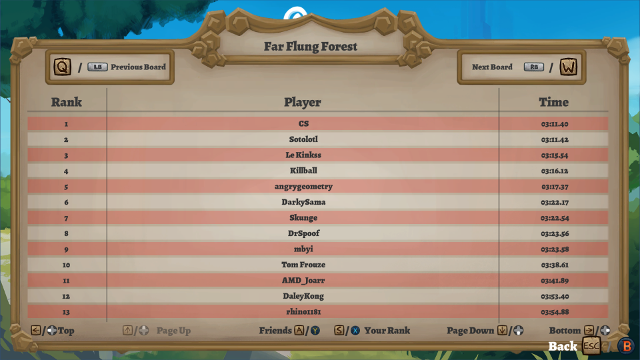 I’m asking because that player is the number 1 or 2 on like the first ten leaderboards.

For all the obvious love that went into it, Shu is just not a very engaging game. It’s a hodge-podge of interesting game elements and cool level designs, each feeling rushed and undercooked and not getting the attention they deserve — the attention that might have made them better. It bare-bones works as a platformer, and it has some interesting exploration/collectible hunting and alternate path discovery going on; it’s not a bad game by any stretch. But I find it very hard to recommend you pay twelve Steam euros for a game that — if you don’t mind me being blunt for a moment — feels like a collection of Game Design Master Thesis projects, stapled together and painted over with a single thematic brush.

Jarenth is a big fan of adventurous birbs, but he prefers it if they actually have some good game mechanics to go along. Mention better birbs to him on Twitter or hang out with him on Steam. And if you dig Indie Wonderland and Ninja Blues in general, why not consider supporting our Patreon campaign?