I’ve written before how one of my favourite things about playing/reviewing indie games is that they allow for rapid variety. I play one for the week, gather my thoughts over the weekend, write, and then it’s on to the next one. In theory, there’s an endless breadth of game types to experience. But in practice, though, some interest-driven pigeonholing is unavoidable. How often have I written about deck-building games on this site? About pixel art? About primarily narrative-driven adventures? And in contrast, how much time have I spent total writing about (say) racing games, or sport games, or hardcore simulations? Or visual novels that aren’t poorly-disguised softcore porn? It makes sense, I get it: I have to want to review a game to actually do it, and my weekly play time isn’t what it once was. Still, I think it’s important — and maybe illustrative — to go outside my comfort zone every now and again.

Which is why this week we’re looking at Gamehouse‘s Heart’s Medicine – Time To Heal, a game that — for all intents and purposes — seems to be about playing an up-and-coming doctor in an E.R.-style drama-first hospital setting. Will there be romance? Will there be betrayal? Will there be mysteriously ill patients, only to be saved when the grizzled old doctor has an epiphany just in the nick of time?

Heart’s Medicine rushes into an opening cutscene right after booting. A cliffside hospital, a racing ambulance, a treacherous winding mountain road in a rain storm. Sounds like the perfect ingredients for some medical drama. 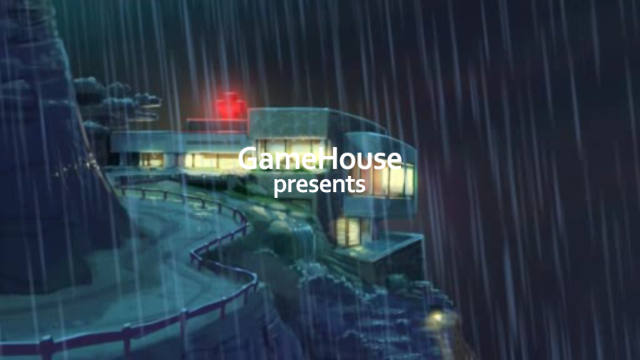 Look at this cute lil’ hospital, though!

The cutscene quality is a blurry kind of stylized, particularly in motion. But then suddenly we zoom in on the inside of the ambulance, which has its very own art style. 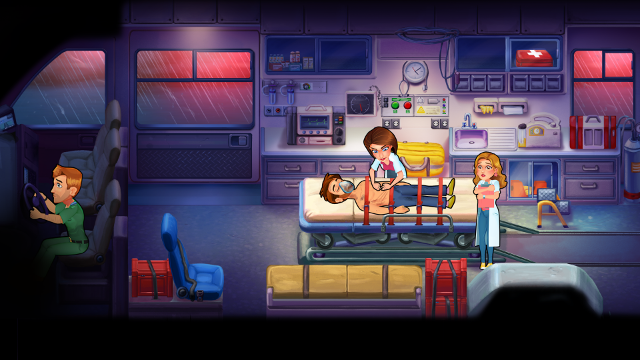 I choose to focus on the art style over the dying man, yes. I have *priorities*.

“A-Allison,” the blonde woman text-whimpers as the rain lashes on outside, “Daniel’s not looking good…” It takes me a few seconds to notice the ‘click to continue’ prompt on the bottom of the screen, leading in-universe to what I assume must be a hilariously awkward silence. 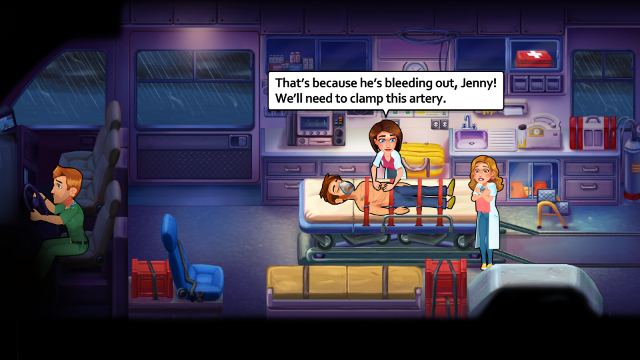 Allison (I assume) produces — seemingly from nowhere — a set of medical-looking clamps. And then… 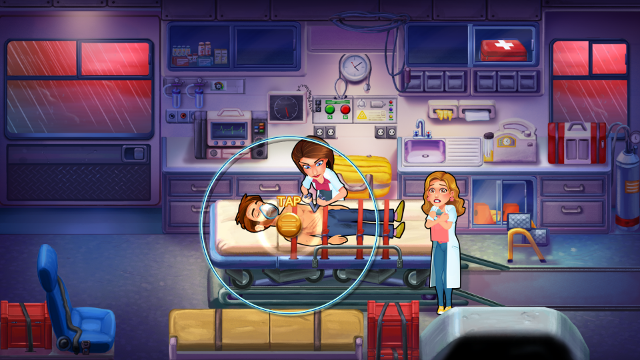 Y’know, we really need a term for when games literally open up in the middle of a gameplay situation. Haven’t seen a menu or settings or anything, I haven’t really been told what I’m supposed to be doing here — ‘tap’, yes, thank you very much. It’s something like in medias res, which this also is, except for gameplay. How about in medias lux?

I tap the TAP button a few times, as you do. A translucent purple circle grows as I do… 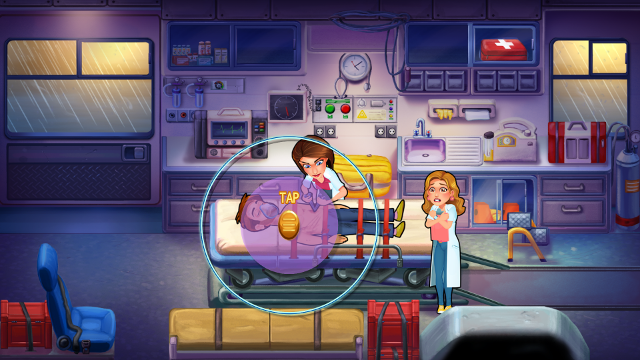 This is probably good and not bad.

The circle disappears and the story continues. Allison tells ‘Joe’, the driver of this spacious ambulance, to floor it, and Jenny to grab a medkit. Which she then spills all over the floor, because hey, storm driving. Which means I then get to play a hidden object game! 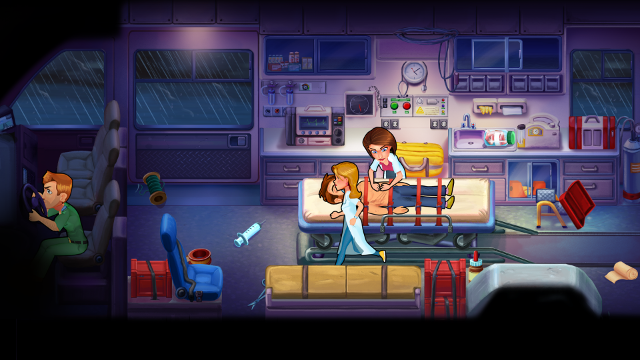 Cutscene. Daniel’s still bleeding, so we have to check his back; I get to drag a button around to make that happen. Cutscene. Yup, Daniel has a significant scratch on his back. I get to fix that by playing connect-the-dots on some honestly queasy-looking cartoon injuries. Jeez, this is almost medical-textbook-illustration stuff. Cutscene. Allison and Jenny are relieved; Daniel is stabilized, and we’re close to the hospital, so everything might just turn out oka-

Then the ambulance goes over the cliff. 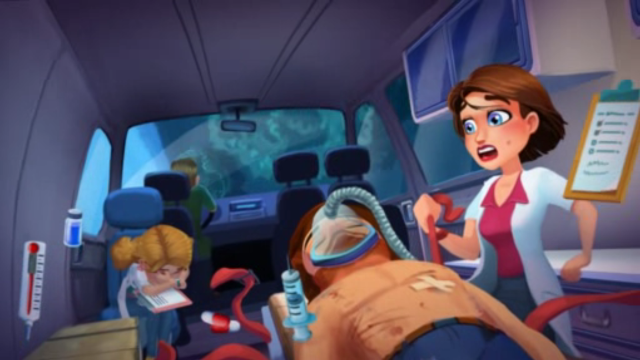 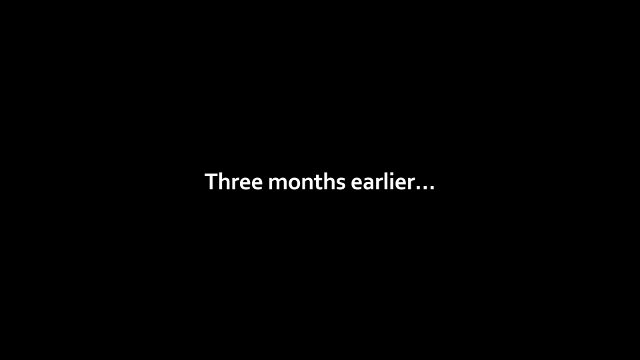 Allison wakes up with a start. She’s in a bus, in front of the hospital. Was it all a dream? Or, like, a future dream? Anyway, time to not pay attention to that at all. 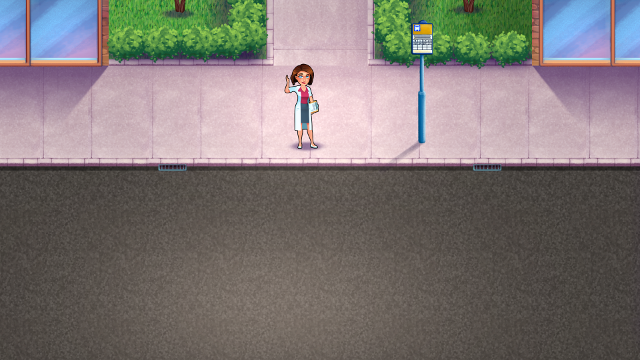 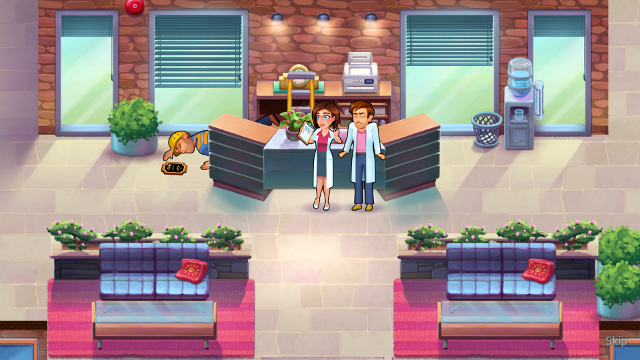 “Eesh! Felt like an ambulance just crashed into my grave.”

Allison is here for a surgery internship. But unfortunately, she gets pipped to the post by Handsome McJerkheart, another intern with lofty ambitions. And since the grumpy senior surgeon only has time to train one person, and apparently internships in this hospital follow some sort of weird law of the jungle, and Allison is very conflict-averse… 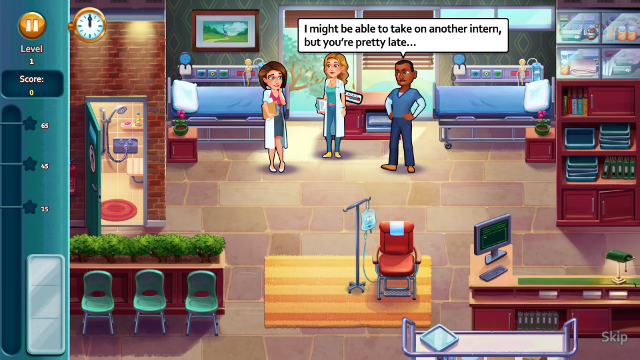 Five seconds later, we’re in this sad-sack excuse of a general ward.

“Do you want me to give you instructions?” Well, I like tutorials, and Jenny apparently likes tutorials, so away we go! 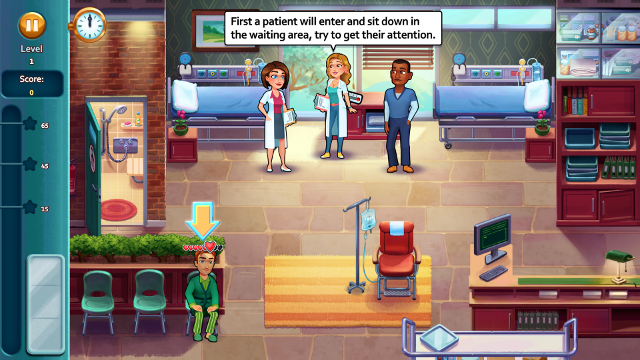 Now I’m being trained *by an intern*. I’m not sure what my place is in the hospital pecking order, but it *cannot* be high.

Finally, we get to some gameplay. Er, non-intro-mandated gameplay, anyway. As far as I understand, the basic gameplay flow is like this: first, patients walk in on the bottom left of the screen and sit in one of the three chairs. Once there, I can click on them, and assign them to ‘where they need to go’ — in the tutorial example, a chair with an IV drip. Once they’re there, I can start treating them. Which involves clicking on them, and… 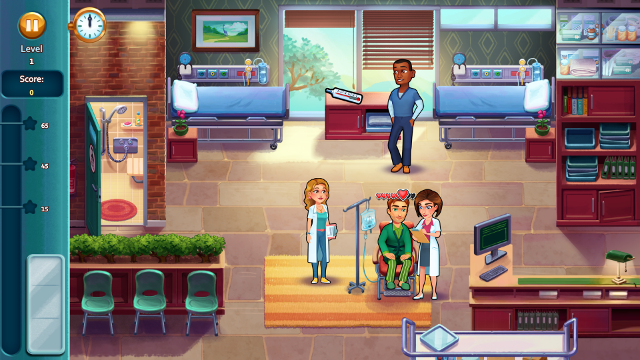 Huh. Y’know, from the introduction, I figured there’d be more… action? Hospital action?

Some patients I can treat simply by clicking on them. For other patients — or later steps in the same patient’s treatment chain, which is what’s happening here — I might have to pick up an item. And when I say ‘pick up’, what I mean is ‘spawn an identical copy of the item in the three-slot inventory on the bottom left, which will be consumed into the aether upon use, but which doesn’t actually influence the core item on the table’. 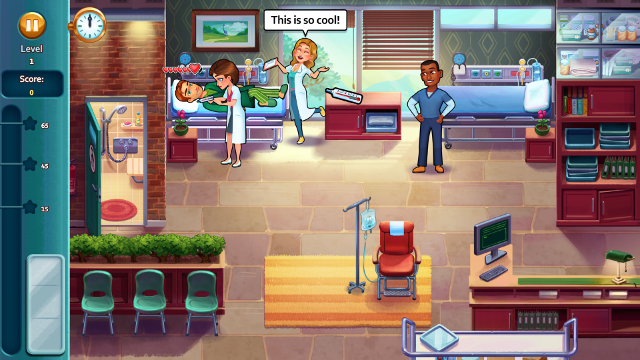 While Jenny and Doctor McNameless are celebrating, I take a quick moment to capture an enormous escaped guinea pig. 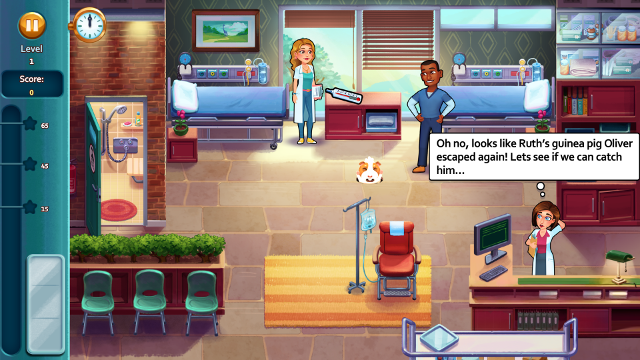 Apparently this creature belongs to ‘Ruth’. I have no idea who that is, even though the game is treating me as though I do. Is this… a sequel or something?

And with that, Jenny and the doctor leave me alone. Time to handle my first shift! 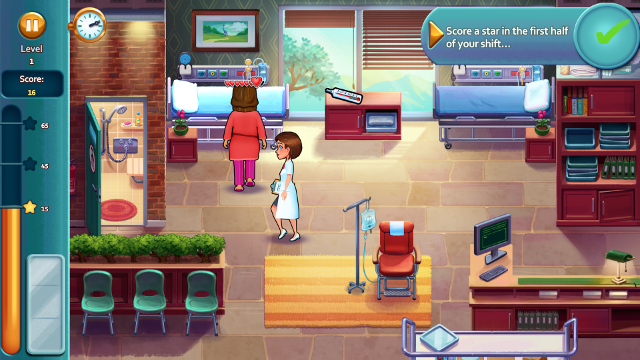 Heart’s Medicine uses ‘shift’ not just as a level denominator, but also as a time pressure device: the clock in the top left corner starts ticking the moment my shift starts. And patients start pouring in. Or, well, ‘pouring’. It’s a slow trickle. But more than enough for my one-intern-capacity to handle.

The game has hinted at the core mechanic loop before, but it’s only in action that I really grasp it. Patients enter the Ward with a certain number of hearts, X out of 8, and a thought bubble over their heads indicating the number of treatment steps they need, and the exact next step they’ll ask for. I can direct patients from the place they are to the place they need to be (and nowhere else) by clicking. While waiting in any place, patients slowly lose hearts. But whenever I treat them correctly, they gain back a few. And at the end of the treatment chain, they walk over to the counter, I check them out, and however many hearts they have get added to my star score total. In this level, 15 heart means one star, which I get with only two perfect patients.

It turns out there’s some actual minigame action in Heart’s Medicine, too! Some patients need their IV drip adjusted, which means I have to drag a wheel to the correct setting (the point where patients stop frowning and start smiling, which I like) as quickly as I can. The faster I do this, the more bonus hearts they gain. 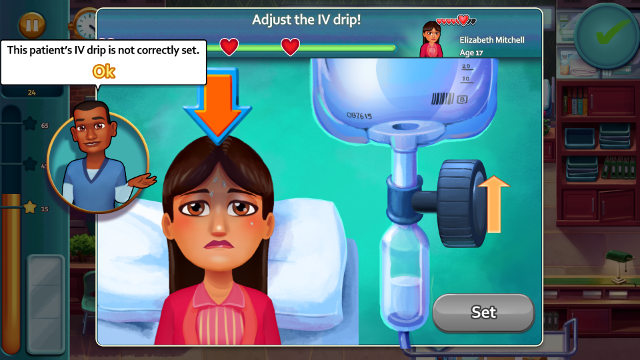 I’m grateful that Doctor Man here is helping me out, but didn’t you leave the room earlier?

Time rushes by. It’s like I’m not even working at all! One moment I’m carting thermometers around, the next… 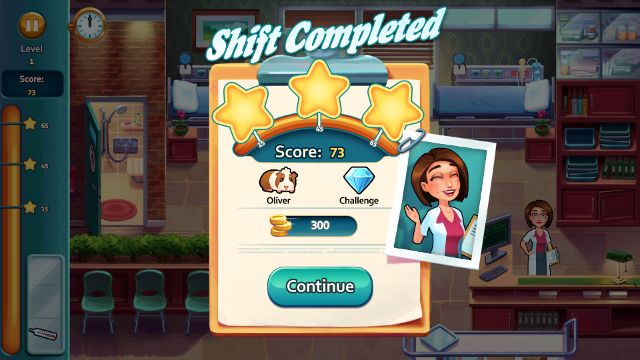 For my victory, I am rewarded with three hundred gold coins. Doctor’s salary, am I right. And one diamond. And a guinea pig. 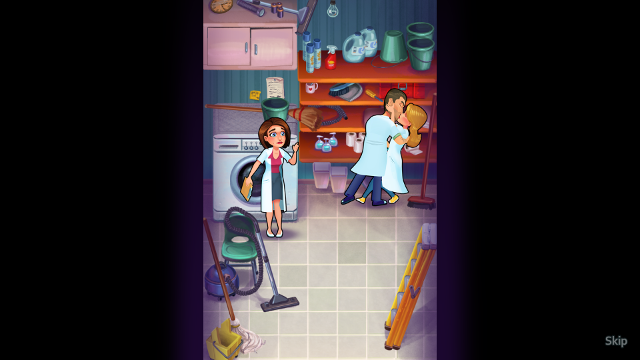 In case you were curious what kind of medical show this was going to be.

And then I get to a level select screen! Wow, look at all this linear progression. I can look forward to no less than ten levels of ward on ward action. And then… I can actually scroll through the level set, which is nice. After the ward comes the pharmacy, then the E.R., then the physiology room, then the radiology lab — sweet — and only then can I finally do my surgery thing. I got my work cut out for me. 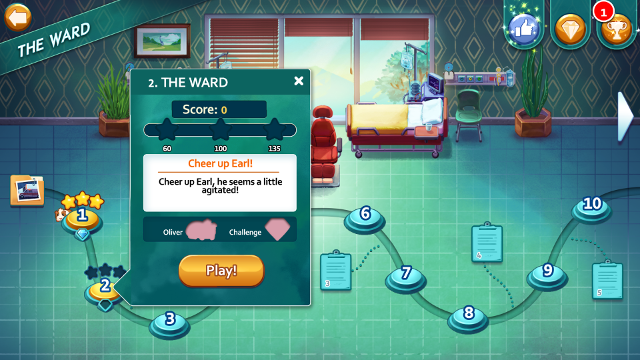 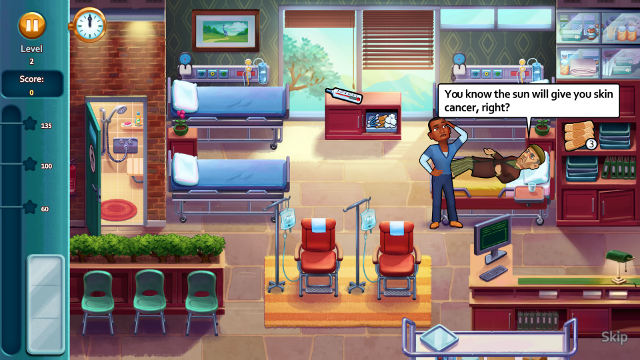 Now, on the one hand, this second verse definitely has more lines than the first. Which is to say, there’s more to this second shift. For instance, they’re apparently letting me — the rejected intern — make any and all purchasing decisions related to sprucing up this department. 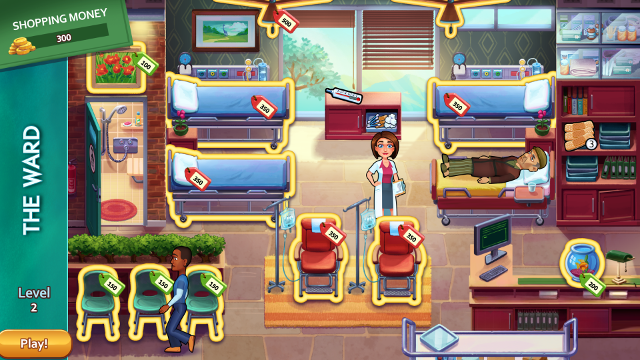 i.e. I can use the ‘gold’ I earned in the last level to upgrade parts of the ward. This’ll give me bonuses in later levels.

There’s more stuff to do, too. I see more chairs and beds for more patients, and consumable band-aids represent an extra treatment option. And this level has the additional challenge of ‘keeping Earl happy’, meaning I have to take time out of my busy schedule to dance for his amusement.

On the plus side of that coin, though, patients that I help quickly and decisively enough can now gain ‘golden hearts’. Remember how I said patients came into the place with X hearts out of 8? They can gain up to 9 hearts now, and when they do, their hearts go golden. Which means they can’t lose any of them ever again. Which means I can let them stand in line at the exit for as long as I want, because, what’re they gonna do? Get mad at me? Tipped that hand too early, busters. Plus, if I check out multiple patients at the same time, I score some sweet bonus hearts. 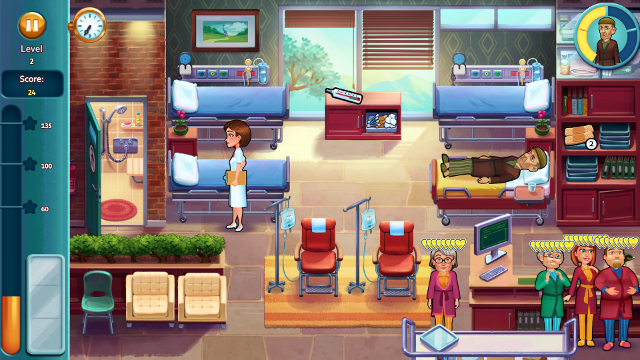 Of course all my patients gain the golden hearts. I’m actually *good* at my job.

But on the other hand… small bonus bits notwithstanding, the larger part of shift 2 seems to be more or less identical to shift 1. I help a bunch of patients with finding chairs and adjusting IV drips, and I click on Earl whenever he complains, and that’s it.

Shift 3, same thing: I learn how to clear bubbles from syringes, but otherwise the same thing. Shift 4, multiple colours of syringe are added to the mix. Day 5, now we got cotton balls. And so on, and so on, and so on… A whole lot of story development happens in-between levels, which I’ll save you the gist of; suffice it to say I don’t think I-the-player have any influence on what’s happening here. I hope not, otherwise I might’ve just killed an old man.

Wait, though, what’s this? In-between shifts 2 and 3, a ‘challenge level’ is unlocked. ‘Help Emily in the hospital canteen’. Maybe this’ll be a different kind of gameplay? 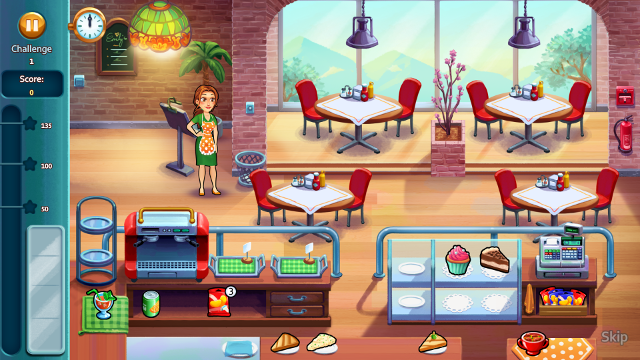 Then again, maybe not.

So, again, on the one hand: more stuff to do, more skills to learn, more game mechanics. This is nice. But on the other hand, it’s kind of feeling like Heart’s Medicine is essentially a non-interactive hospital story tied together with mostly narrative-free dexterity minigames. Which, you know, is a choice. But would that really be all they do with this concept and formula?

Could be I’m wrong, of course. Maybe this low-grade gameplay is just consigned to the ward area, i.e., where interns go to get bored. Maybe the E.R. and Radiology and Surgery are where the real involved gameplay kicks off.