My continuing love of deckbuilding games has been well-documented on this site. There’s just something I really enjoy about shaping random starting conditions and unpredictable inputs into something that vaguely looks like you know what you’re doing. Like that cartoon thing where people fly through the air on a fire hose.

And given that I’ve never played a city-building-themed deck builder before — I’ve done kingdom building, space battles, fighting legendary monsters, and even restoring splendor to a curse-ravaged forest glade, but never urban development — ColePowered Games‘s Concrete Jungle seems, in more ways than one, like just the thing for me. Could I make a city so poorly developed that even I wouldn’t want to live in it? Only one way to find out! 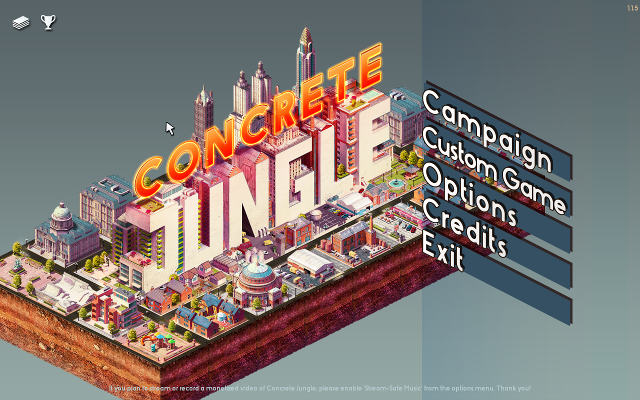 I mean, it’s very indicative of the intellectual rights-based corporate dystopia we’ve come to live in. But as a solution I guess it’s clever.

There’s not a lot in the way of options. Of course I check the audio options first, and sure enough, a ‘Stream-Safe Music’ checkbox accompanies your four standard audio sliders. Then there’s limited graphics options, a small set of keyboard controls and mouse/controller checkboxes, and a set of ‘Game’ options that I’m sure I’ll be able to parse later. 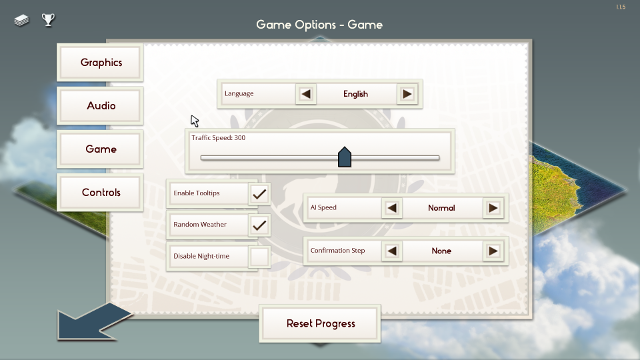 Interestingly, there’s a ‘Traffic Speed’ slider here in Game. But the associated ‘Max Traffic Amount’ slider is in Graphics. So strictly the *amount* of cars is a graphical setting, but the speed with which they move has game implications? Am I reading this right?

I’ll start things off, as you do, in the Campaign. This brings me to scenic Caribou City, which… I guess vaguely looks like a city? From very, very high up? A small white square (that very bluntly affords selection) is the actual first level: it’s called ‘Hollyville’, it promises an easy tutorial-style explanation of ‘the basics of Concrete Jungle‘, and apparently I’ll need 4 for 3 stars. 4 what? And why do I need stars? I don’t even know. 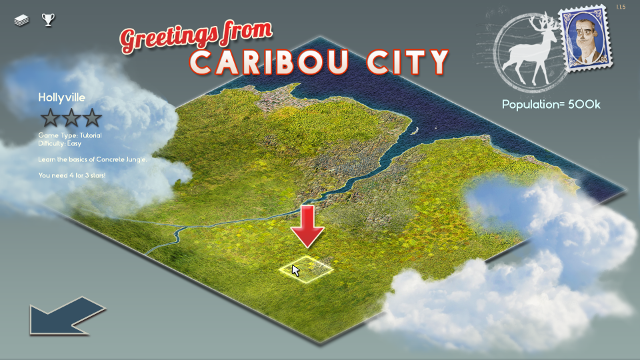 For real, though, I think I’m supposed to be looking at a satellite map? Or something? To me it looks all the world like an empty green coastline. But those brown-grey splotches I figured for small mountains are probably the urban development areas, huh? 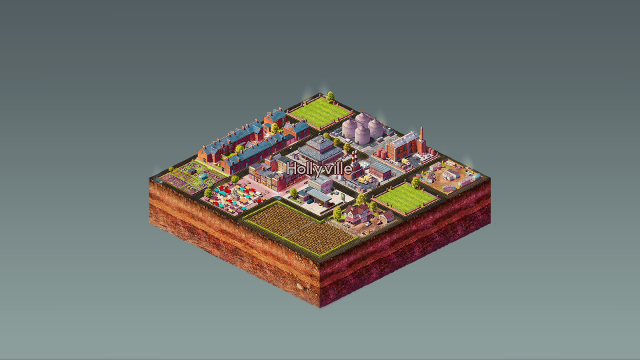 Scenic home of a few houses, some farmlands, a market, and a small industrial area.

But enough about that. 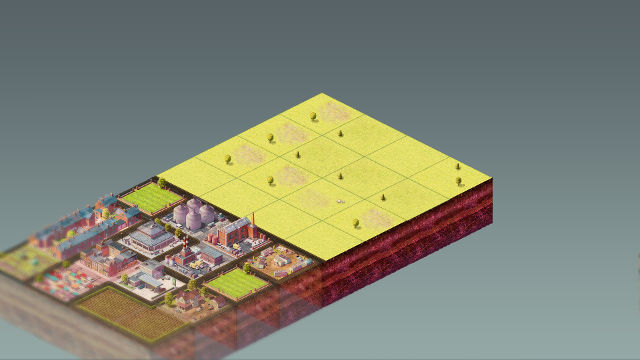 Let’s look at this empty plot of land instead!

Only after established Hollyville has faded from view entirely does Concrete Jungle‘s UI fade into view. In the top left, hearts and white buttons. In the top right, blank sliders and numbers. The empty landscape is divided into sixteen neat squares, four of which have little house-shaped banners nearby. And in the bottom…

To my surprise, the ostensible deckbuilding-based city management game Concrete Jungle uses character-driven narration. To my even greater surprise, it uses voice acting for that narration. To my significant surprise, that voice doesn’t actually sound terrible! A woman named ‘Laney’ introduced me to Hollyville, and a promise of rope-showing is given. 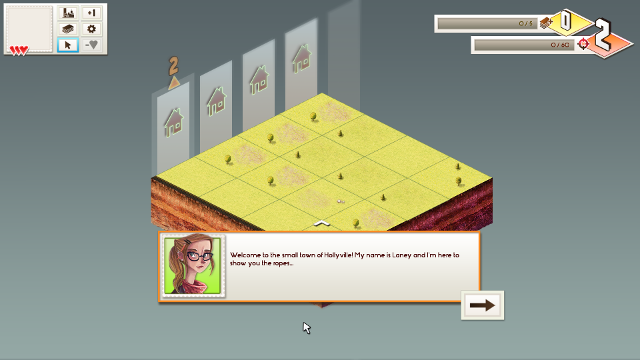 More UI appears on the left side of the screen. It’s a series of cards! Finally. The cards depict various buildings, like a school or a factory. And when I say ‘depict’, I mean that more as like a schematic overview: the pictures on the cards are mostly ugly white monopoly houses, surrounded by red and blue squares and numbers I don’t understand yet. 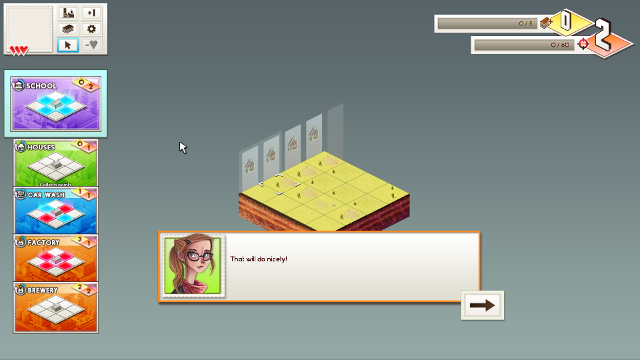 Then again, these might actually be accurate depictions. Maybe this entire town is featureless white houses!

What I can do with these cards is place them on the grid, which I assume represents an undeveloped part of Hollyville. Specifically, I can place the top card in the list. Putting down the school has two effects: first, it creates the actual building and an associated set of (immediately busy) roads, and second, it affects the surrounding tiles somehow. The school had blue tiles in the four straight cardinal directions, which translates to blue ‘1’s showing up on those tiles. 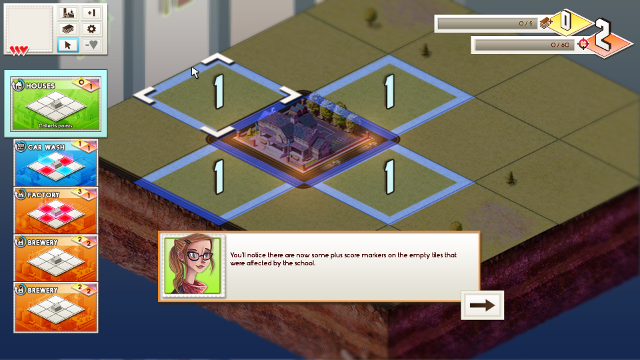 Every town needs a good school like this. Even if it’s literally everything that constitutes the town in the first place.

Why do I care about these numbers? The next card in the list, ‘houses’, answers that question. The house card ‘collects points’, meaning that if I put it on a tile with a point value, that point value is then useful to me! 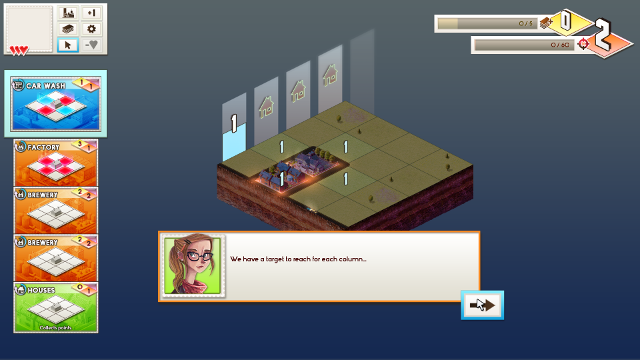 It turns out that Concrete Jungle is a game about clearing columns. Every column has a score value that must be reached, by placing down houses on tiles that have points associated with them. Reaching that target on the left-most column clears it, removing the column from play and moving the entire field one column to the right. Somewhere in the distant unseen right, one of the columns is marked as the ‘goal’ column, and reaching and clearing that one means victory for…

Suddenly my memory is thrown for a loop.

Have any of you ever played a mobile game called Megacity? I have, back in 2014 somewhere (before the tablet I had it on decided to career-switch to paperweight). I didn’t play it much, but I thought it was a nifty idea: it’s basically a game where…

Well, I mean, it’s this game. It’s almost exactly literally the same game as Concrete Jungle. Not just because it’s about placing cards to build a city, or that it has column-based targets that you clear by stacking points and clearing houses. It even uses the same visual metaphors as Concrete Jungle: red and blue points, represented by red and blue squares in a stylized card display, and green houses to collect them. Hell, I can look at the app store promotional video and see buildings like the school and the factory are operationalized exactly the same. I know games in similar genres tend to gravitate to similar visuals and mechanical solutions, but this level of direct cloning is ridiculous. It’s almost like the two games were made by the same people.

It’s almost like that because it’s actually like that. I guess ColePowered Games liked Megacity‘s core mechanics enough to iterate on the formula, huh? Like I said, I enjoyed Megacity for what it was, even though it didn’t have great staying power for me; let’s see if their second try is an improvement over the first. 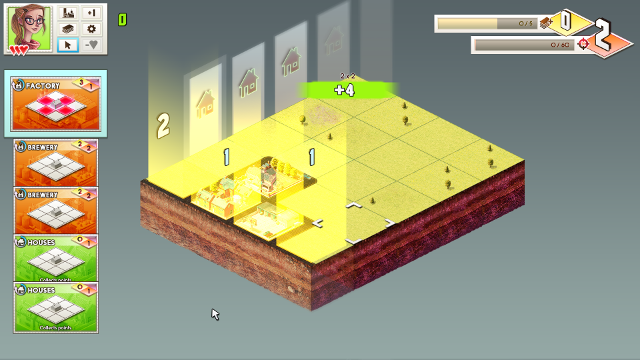 We now return to our regularly scheduled Hollyville program, where the leftmost column of the new town area has just *exploded into celestial light*.

Stacking points, then! It won’t always go well: while nice fancy buildings like schools and libraries provide positive blue points, angry red buildings like factories provide negative red points. And since I can’t always choose what you want to place… it might just happen that a column is filled up and there’s no possible way to get the points I need! For instance, the tutorial just mandated that I place a row of factories and breweries next to my school. Not only are these terrible point-wise, but I don’t actually have any houses on the first row now. If that happens, a heart-shaped ‘life’ must be spent to forcibly clear the first row. 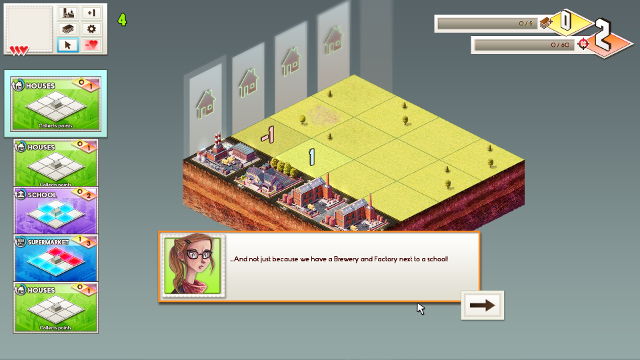 I don’t think I have to tell you what happens if I run out of lives.

For the last stretch of the tutorial level, Laney looses the reigns. I’ve learned the basics of Concrete Jungle; can I make it to the final column without messing up horribly? 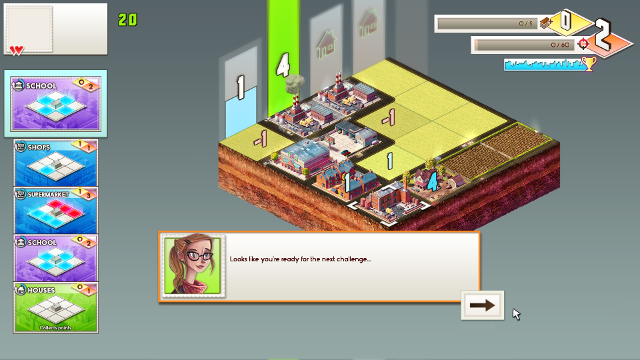 It turns out that I totally can!

Except, have I really learned all the basics already? That was probably presumptuous on my part. And sure enough, the second level (Luther Fields) introduces some new things. Like more and larger rows to build in! And two active card slots, meaning I’m no longer entirely at the mercy of the random card row. 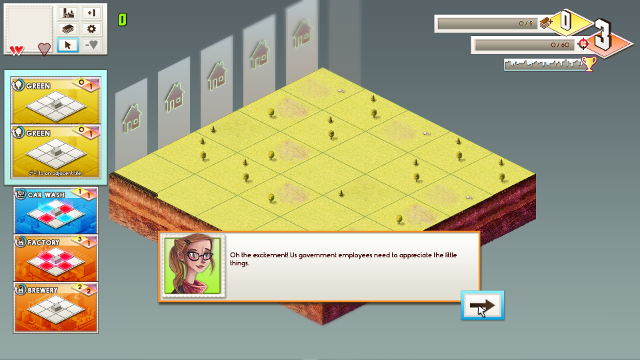 I feel ya, Laney. 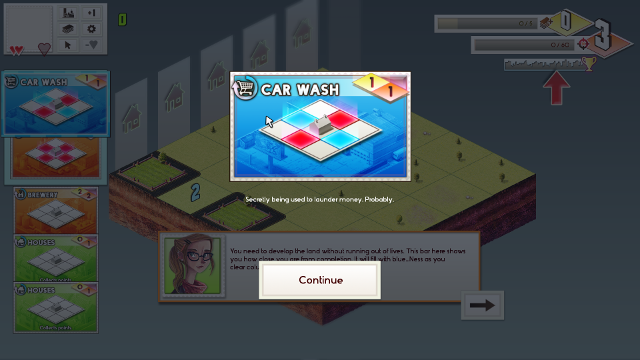 I also learn you can zoom in on cards to get a closer look at their effects.

Luther Fields is essentially a tutorial examination. ‘Here are all the tools we’ve taught you,’ the game says, ‘as well as these fancy yellow cards that let you boost certain tiles in a more directed way. Can you clear this level without constant interference?’

And I can! Putting my quick learning (and my Megacity experience) to good effect, I get to work filling the columns with points and setting up cascading score traps. Before long I win two out of three stars, as well as… 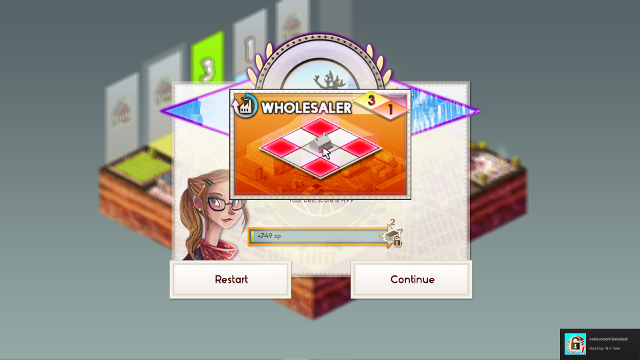 “Okay, but wait,” I hear you say, “this can’t be all. Didn’t you bill this as a deckbuilding game? Where’s all the deckbuilding?” And you’re right to ask! Good eye, reader. The third area, Grapefruit District, introduces that element. Turns out that the yellow and orange numbers on the cards weren’t just for show. The yellow points are ‘economy points’, and they’re tied to the yellow bar in the top right. Placing buildings that have a positive yellow number — so factories and breweries and very pointedly not houses — fills the bar. And when it’s full, rewards happen! 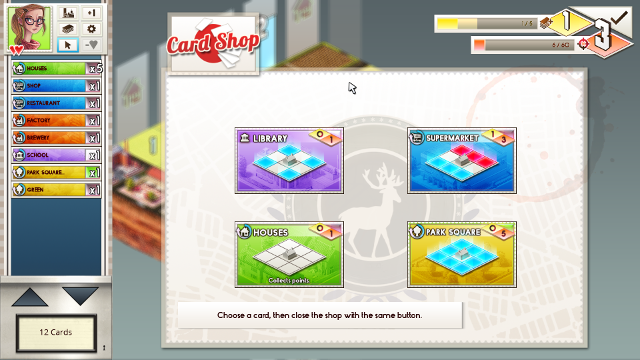 Ah, there we go. On the left, I see the ‘cards’ currently in my ‘deck’. Laney tells me I always start with twelve basic-level cards. But every time the economy bar fills, I get to add one new card to the set. Maybe they’ll be nice and rare, like a park square or an observatory! Or maybe they’ll be more standard-issue houses and libraries. Point is, I can steer development this way. Laney also very clearly points out that some cards are added to the deck forever, but other cards are only usable once. Thus adding a new layer to the decision making: do I want this sort-of-neat card that I can keep using, or this really good card that disappears after I use it? 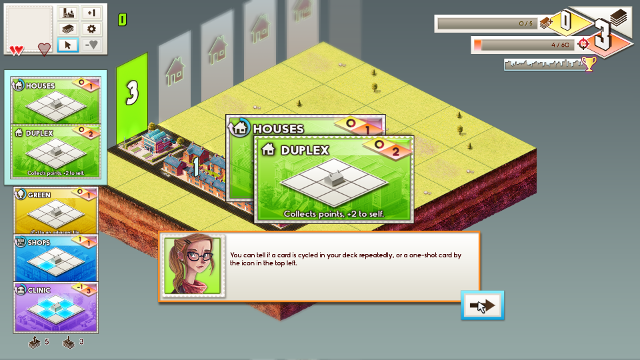 And the orange numbers? Those represent ‘expenditure’. It’s a long bar, a lot longer than the economy one, but when it fills up… the score target for all future columns — every column I can’t see yet — goes up by one. 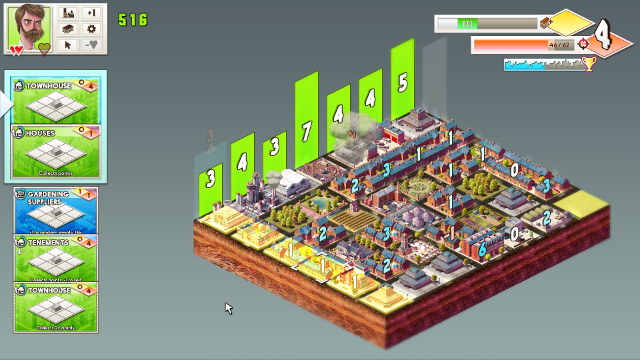 Remember that nice stable score target of 2 that I started out with? It’s not even doing *anything* anymore.

There’s some more mechanical explanation here, about blocks and roads and the importance of keeping your colours together. But by and large I think I have Concrete Jungle‘s number at this point. Stack points, build houses, clear columns, and try to get your tech level high and keep your expenditure level low. Easy enough, even if the play fields have been getting bigger and harder to fully oversee. But that’s good! The only way to get better is to practice. And I’m about ready for a challenge. 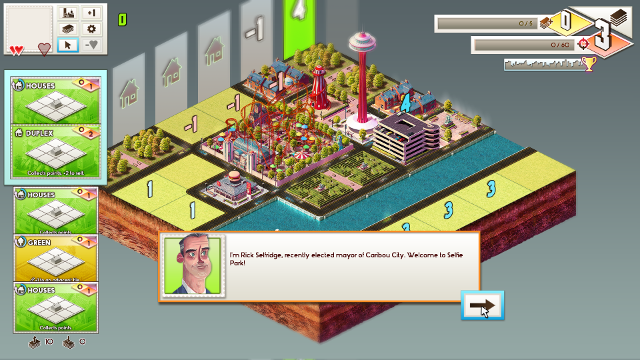 Ask, and I shall receive.

Oh, hey, the plot picked up. Get back to you after I stop the incompetent mayor from driving down property values!