Dodge Roll Games‘ and Devolver Digital‘s Enter The Gungeon has danced on the periphery of my awareness for a while now. People have been talking about it since late 2014, and for a long time I was sure I remembered seeing people play it in Steam Early Access. Which is actually impossibly untrue, so… My terrible excuse for a memory might have been confusing Enter The Gungeon and Nuclear Throne, but that’s neither here nor there.

Point is, I’ve been hearing about this game in whispered, misty rumors, always enough to pique my interest but never quite enough to commit to full investigation (and the fact that I was waiting for a ‘has been released from Early Access’ message that would never ever appear probably wasn’t helping). I still don’t even know what a Gungeon is. Is it, like, a gun dungeon? A dungeon for guns? A dungeon that is a gun? A gun that’s a dungeon? A dungeon full of Gungans? Had a good friend not interfered, I might never have had the opportunity to find out.

But a good friend did interfere, by giving me Enter The Gungeon as a birthday gift. And, well, here we are! If you’re as clueless as I am in matters of Gungeon as I am, let’s explore this mystery together.

“Throughout the galaxy, a legend is told…”

Enter The Gungeon unfurls a banner of introduction for me. Almost literally: the intro is styled in sepia-toned still images that scroll by, making me think of one of those wall banners. It starts off with fairly standard stuff, a grim dark fortress on a lonely distant planet, before taking a sharp turn for the weird. 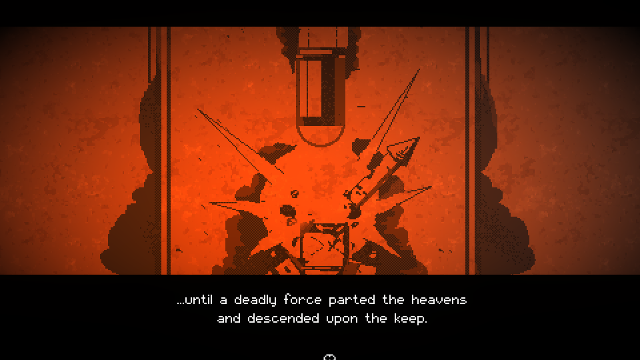 ‘There once was a nice fortress, until a giant bullet from heaven smashed it apart.’

The fortress was destroyed by the bullet, so naturally a new fortress was built around the bullet: the titular Gungeon, which is close to what I was guessing at earlier. And this Gungeon holds a much-sought-after prize in its deepest, darkest levels: a gun. 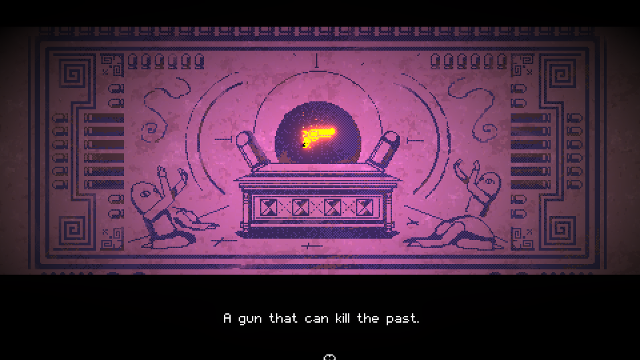 The past-killing gun attracts many fortune-seekers, because apparently I’m not entirely clear on the potential benefits of ‘a gun that can kill the past’. Wouldn’t that at the very least cause some paradoxes? But maybe the fortress-visitors have better planning skills than I do. Or just more accurate aim. Either way, getting this gun requires a little more vigorous testing than a standard background check: if for whatever reason you really need to pop a cap in the past, better prepare to… 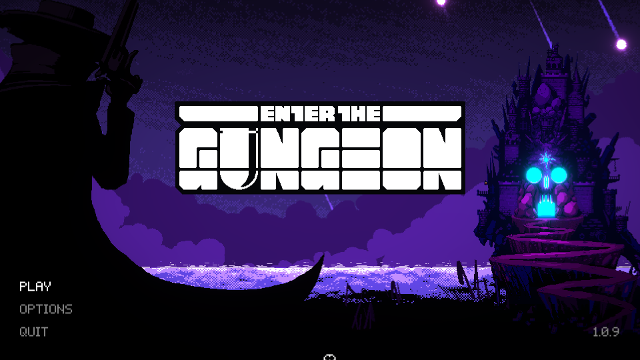 The moment the title menu flashes on-screen is also the moment the background music shifts. From the intro sequence’s low droning ominous baseline, to… I can’t really do justice to how incredible this song is, so listen for yourself if you have the option. It’s really something else. The game sings its own name. It’s almost enough to make me love it immediately and forevermore; as it stands, my heart is merely fluttering.

In contrast to the colourful opening, though, the options look kind of… Downwell. All the usual suspects in a simple set are there, audio and video and controls and whatnot. It’s just that they look like this: 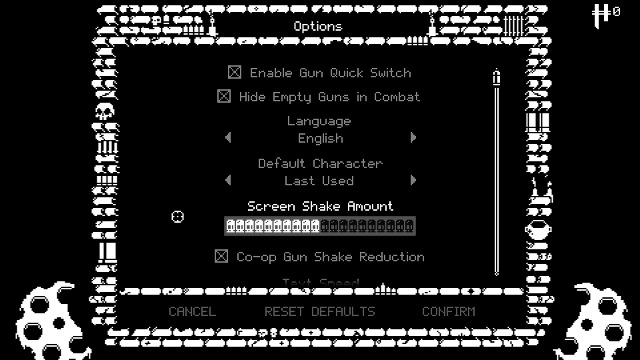 Really hoping I wasn’t tricked into playing a text adventure for review here.

Only one way to find out what my next five or so hours are going to look like. I have to Enter… Well, you know how this works.

Phew, it’s the colourful one. 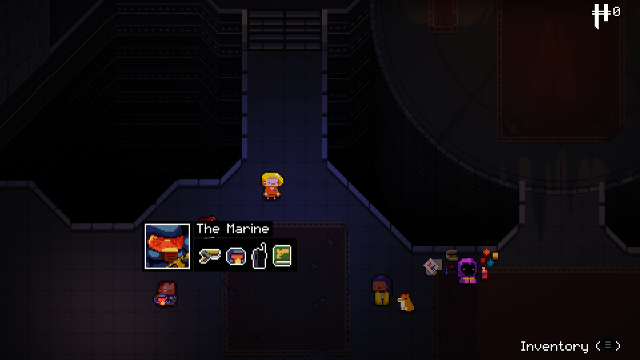 Not that I’d have objected against more Downwell, because that game was hella fun.

For a few seconds, I sit confused at this screen of five pixel-y humanoid characters and one dog. Flicking the arrows or the left analog stick causes an overhead portrait to cycle through the four figures on the left: the Marine, the Pilot, the Convict, and the Hunter. Is this a… character select? It probably is. Except it’s not much of a choice right now: I don’t know what any of the icons above these characters mean, and if they’re different in any meaningful way. I pick the Marine, because that’s what the game started on; on my selection, he pops on his helmet and heaves a small gun. And then I control him.

First order of business: can I talk to these other characters? 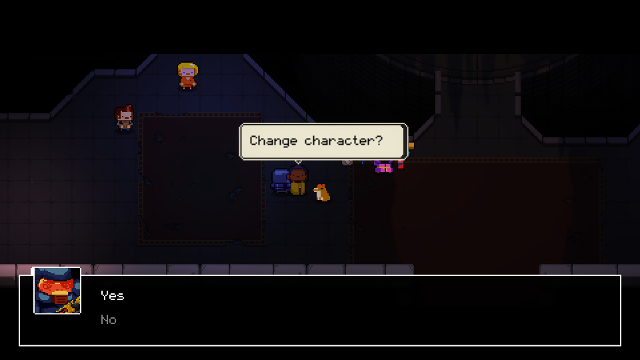 Nope. I can switch to the other three, and the purple-robe figure initiates coop mode.

Second order of business: is there, like, an inventory or something? So that I can check out what all these icons mean?

The good news is, I can check my three items pretty effectively here. They are, respectively, ‘gun’, ‘free reload’, and ‘passive buff’. The better news is, I can also check every other item that’s currently unlocked. The bad news is, the ratio of ‘unlocked items’ to ‘totally locked items’ probably can’t pass a one-sided T test yet. The worse news is, there are so many items. And upgrades, and enemies, and bosses. And they’re shown in an unsorted picture list!

This is not a convenient way to structure a large set of concepts.

Anyway, enough theory. It’s time to explore this place. I choose to go… up!

Going up, I find what appears to be a washed-up fish-man of some sort. He and I have a good conversation, where he tells me that his life sucks and that I probably won’t succeed at my goals, and I don’t say anything because this isn’t that kind of game. 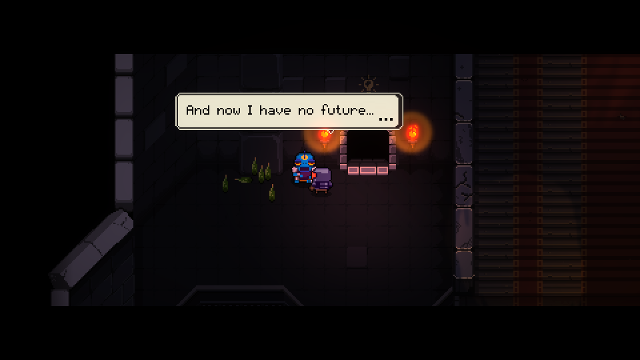 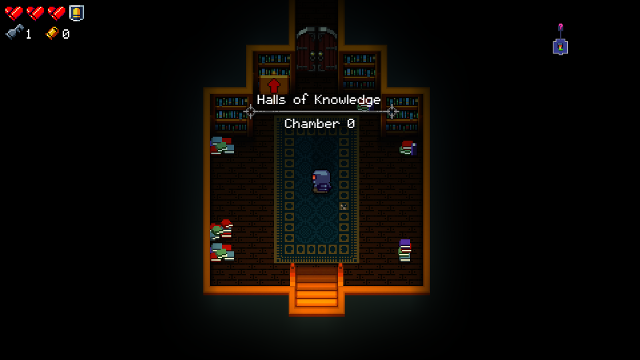 I did! Wow, that’s some good level design. I really thought I figured this out on my own.

In the Halls of Knowledge, I meet Ser Manuel, a floating blue ghost who shouts tutorial messages. 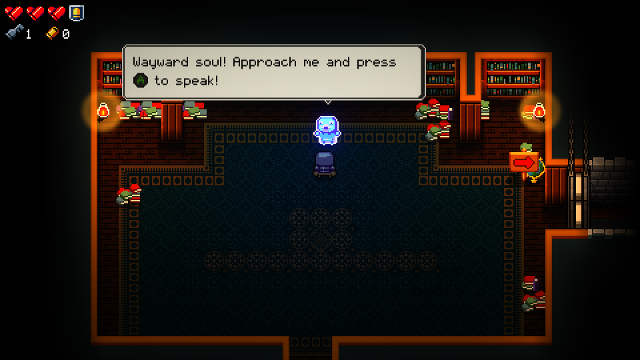 Ser Manuel teaches me the important tricks of the Gungeon trade. Like: flipping over tables! 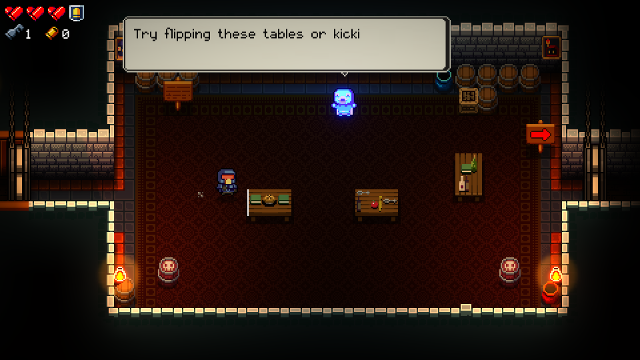 After ‘walking around’ and ‘talking to ghosts’, this is seriously the third-ever thing he teaches you. 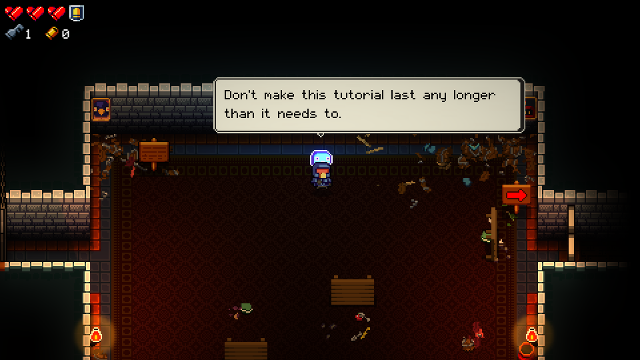 Ser Manuel does not appreciate my attempts at levity.

In short order, I learn how to dodge-roll across pits and past obstacles, use magical Blanks to vaporize enemy bullets, how to read the minimap, and how to open chests. Yup, that about covers the basic Gungeoneering skill set. Don’t think we’ve forgotten anything here. 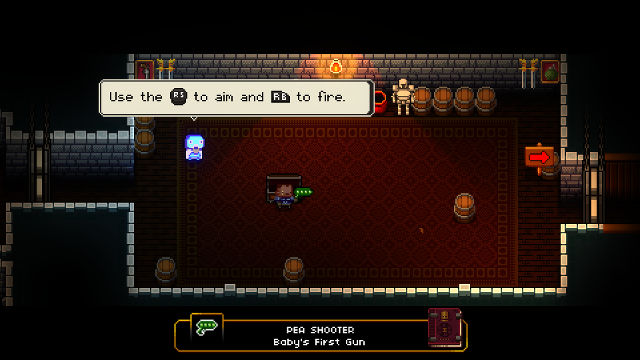 Okay, so Manuel saved the best for last.

Ser Manuel explains the basic procedures of gun use and ownership — left analog stick to aim, right bumper to fire, right bumper when empty to reload or X to reload any time, and these can all be re-bound — before giving me a practical tutorial. For my live-fire test, I have to fight one of the Gungeon’s “natural inhabitants… cruel, savage, and bloodthirsty.” Which means, of course, that I go up against a giant bullet with legs. 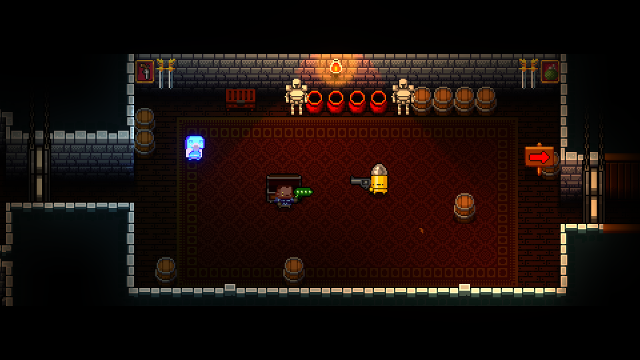 And arms, and a face. Look at its happy little face!

I learn to navigate the Gungeon, to fight its native bullet inhabitants, to keep an eye out for hidden passageways, to collect keys and healthkits, and to loot sweet guns from any chests I might find. And… that’s it! Finding the mystical AK-47 is the final trial of the tutorial, and nothing else interesting happens after that. Nothing at all, no sir; you should probably stop wondering about how anti-climactic a battle tutorial would be without a tutorial boss fight. 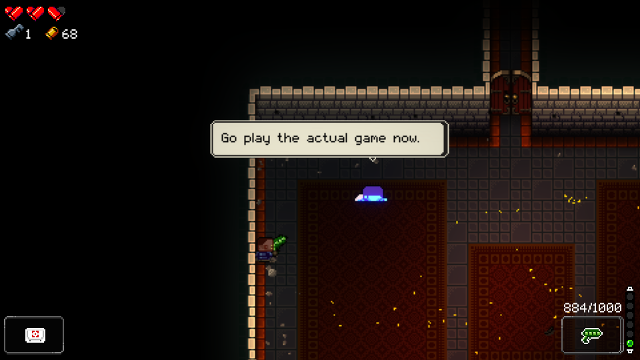 Ser Manuel is lying on the ground here because he’s overwhelmed by how good I am at this game.

And with that, I’m back in the main hallway. In the other side entrances all I find are barred-up doors, but when I finally decide to brave the giant, looming stairwell in the center of the room… 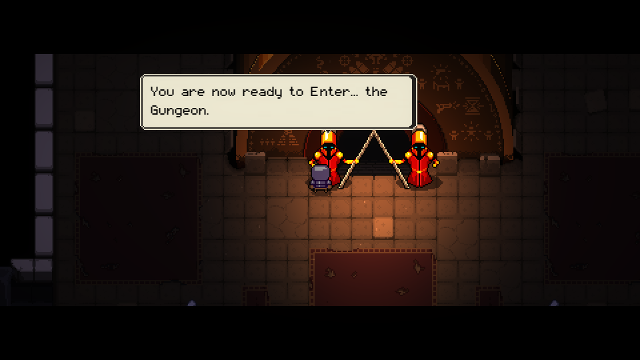 Ah, *there* the game proper is! Not a moment too soon, and not a moment too late either, apparently; the dialogue here suggests I wouldn’t have been allowed in before the tutorial anyway.

Alright! This is it! With my tutorial knowledge firmly ingrained, I’m ready to actually really enter the Gungeon. Somewhere in the depths of this keep, a past-killing gun has my name on it. I don’t know still why I would want it, or how deep I need to know, or what to expect, or what to prepare for… but calm deliberation and careful boy scout prep have never let anyone literally murder a critical part of the space-time continuum. This first page is running long as it is, so I’ll have to leave all of you at the entrance as I go find my final destiny. Brief you on how it went one page in the future!