Heya, readers. Happy birthday to me! By the time this goes up, I’ll have celebrated my 30th birthday. Officially old enough to know better than to spend my valuable free evenings playing and writing about terrible video games. But young enough to not care.

Apropos of that, I decided to spend my (busy) birthday week and weekend playing The Most Recent Sakura: Sakura Dungeon. As a gift to myself. No, not like that. I mean, yes, also like that. But more importantly, if I play and review it now, I won’t have this thing hanging over my head come November. I’m essentially gifting myself a bullet to bite, and yes, I couldn’t have thought of a better 2016-themed birthday gift if I’d tried. Thank you, I’m good at my job.

Sakura Dungeon‘s title is a Sakura Game title. That’s honestly my first thought on loading this game up. ‘Yup, looks like another one of those.’ 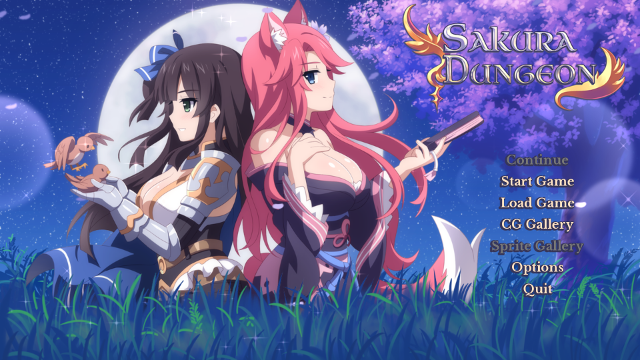 It should bother me that I’m getting used to this.

Huh. This is… much more involved than I thought, if we’re being honest. The usual VN suspects are here: sound volumes, text speed, window mode, auto-skipping delay… everything I’ve come to expect from these things. But then there’s also a list of selections that are weirdly active? ‘Dungeon Quality’, ‘Down Arrow Orientation’. ‘Battle Speed’? 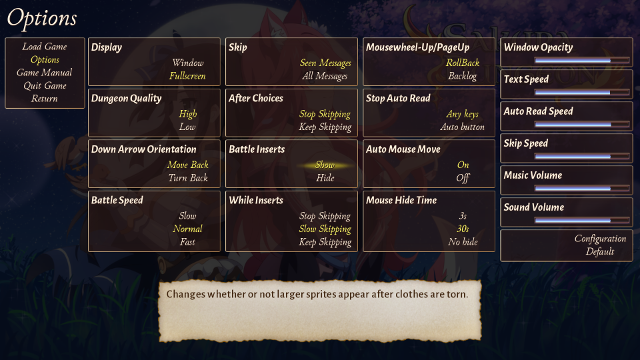 Did I load up the wrong game by mistake?

Alright, my interest is officially piqued. What strange alterations to the formula are you hiding, Sakura Dungeon? 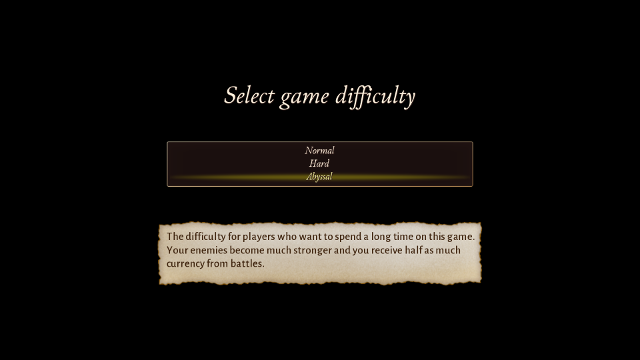 You have an honest-to-goodness *difficulty slider*? I don’t know whether to be impressed or *scared*. 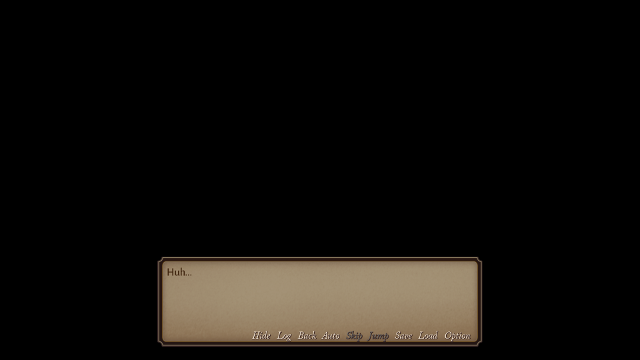 Sakura Dungeon opens on a hopeful darkness. “Is this long dream finally over?” I wish it were, game, I wish it were. But we’re only just getting started.

The world snaps into view, and I’m looking at a sexy fox woman. 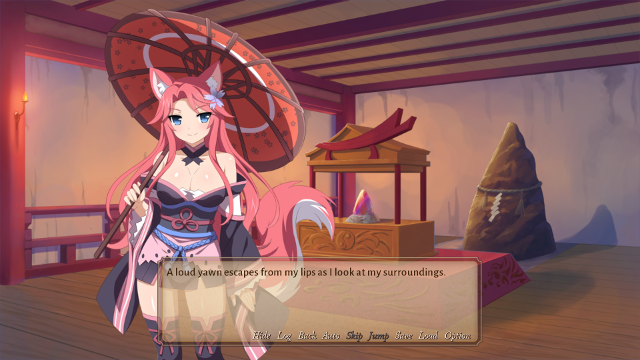 I can’t say I’m very surprised by this reveal.

“A loud yawn escapes from my lips as I look at my surroundings. I rub the sleep away from my eyes, my blurred vision slowly focusing.” Getting a very Standard JRPG Opening vibe from this. Did my stand-in character oversleep for school? Also, who is my stand-in character? Is it this fox lady? Could be yes, could be no: Sakura games have tended towards both the Invisible Man Protagonist as the Visible Sexy Woman protagonist. And since the next text box goes “It’s then that I notice someone else standing in the room”… 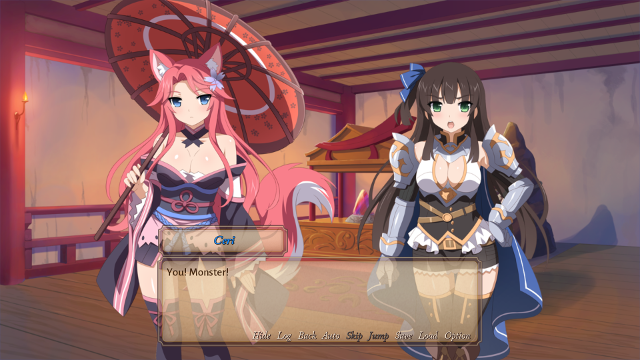 That’s *almost* practical armor. Great for enemies with a predilection towards cutting off arms. 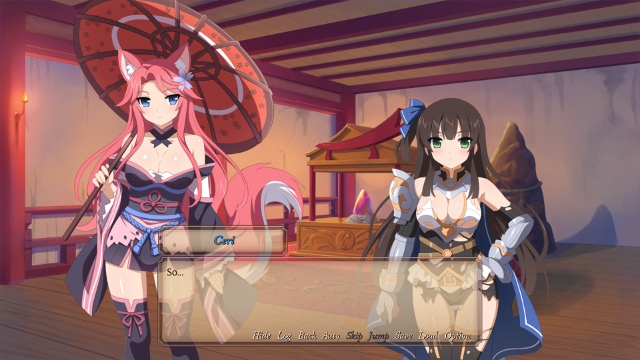 Magic is used, clothes are torn, no surprise is had by Jarenth.

The fox lady — goes by Yomi — uses magic to… enslave Ceri, the human knight. And while I want to say that I’ve seen this anime and I know where this is going, the truth is slightly more benign: Yomi is suffering from standard thousand-year-imprisonment power loss, so she’s going to need a big hunk of sword power to protect her while the plot kicks in. 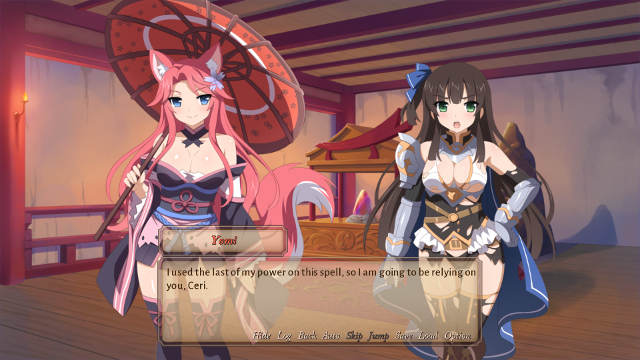 In lieu of a beefcake meat shield, this tattered-armor B-grade warrior will do, I guess.

Anyway, then we all teleport to a village. 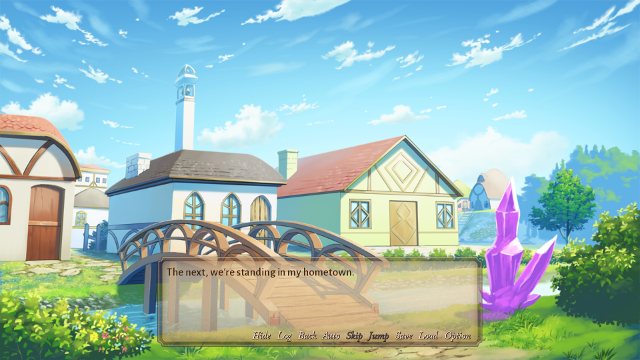 Yomi the fox checks up on the village, which is run entirely by 1000-year-old monsters in human disguise. Attractive busty white woman human disguises all, obviously. More plot is spilled, armors are repaired, and tenuous alliances are formed. 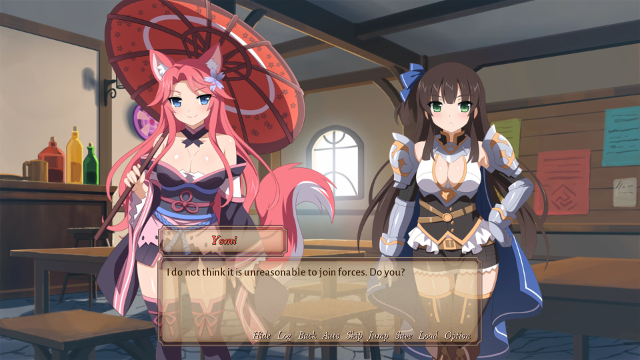 “I mean I literally magic-enslaved you. But that’s not the kind of story this game is interested in telling.”

Broadly, the plot is this: Yomi — who at this point I’m sure is controlled by me, the player — used to be the Dungeon Lord for the nearby dungeon. Big thing, very prestigious position: power, servants, influence, you get the idea. But through nebulous circumstances, she was deposed and trapped in, well, the kind of magical prison that stands undisturbed for a thousand years until some random-ass questing knight blusters in. A new Dungeon Lord has taken over in the meantime, and whoever they are, nobody in this town has any good words for them. So Yomi has her work cut out for her: infiltrate the dungeon, defeat the guardians and the new Lord, and take back her rightful place as the person what runs things around here.

Now, I’m playing a Sakura game at the moment. Booming storyline and mentions of battle or no, I’m expecting this whole thing to get resolved in the mostly non-interactive style of a semi-non-branching visual novel. If it was good enough for Sakura Fantasy, it ought to be good enough for Sakura Dungeon, right? Right.

Turns out, though? It’s not. 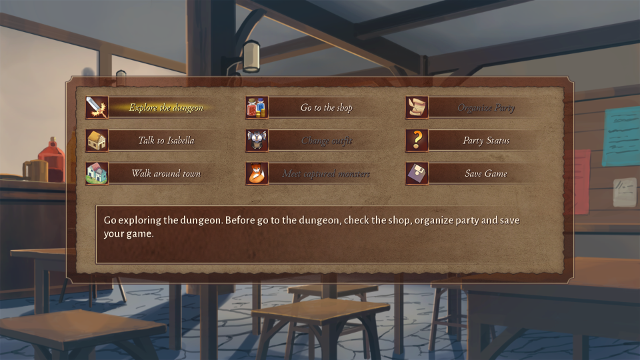 Okay, so this game isn’t your standard low-effort visual novel. Fancy control panel, sword icon, mention of the word ‘party’. But let’s not go overboard. Maybe it’s a Fairbrook-style day planner game instead? Maybe even a really stat-heavy one, like Long Live The Queen? 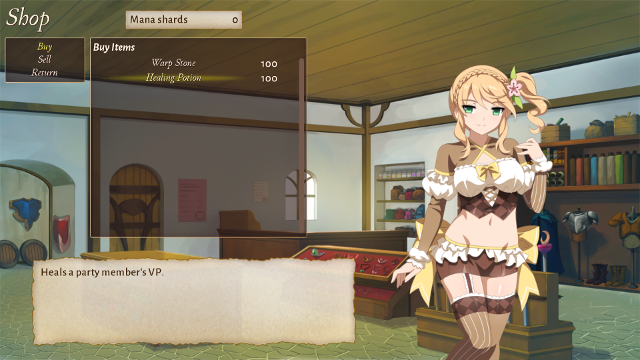 It’d be the first VN I’ve ever played with a currency system and an *item shop*, but I guess it’s not technically impossible.

But no. Sakura Dungeon thoroughly shatters brand name expectations by being a straight-up dungeon crawler. 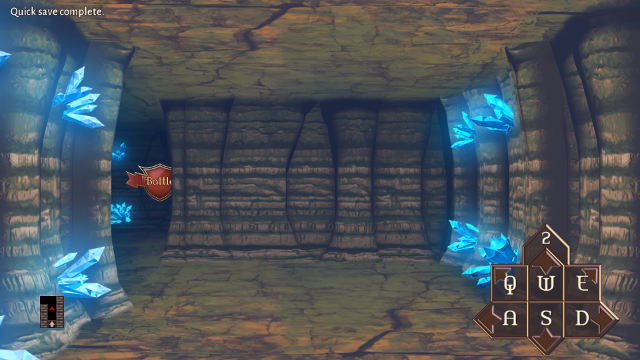 I don’t know if it was even possible to see this coming.

No, but really. Sakura Dungeon is an actual, honest-to-goodness Might & Magic / Legend of Grimrock-style dungeon crawler. I’m currently controlling a one-woman adventuring party on the earliest level of the dungeon, referred to as ‘the dungeon’ in-game. Party movement is tile-based: W and S move forward and backward, A and D strafe left and right, and Q and E turn facing in 90-degree intervals. There’s even a minimap in the lower left corner… that updates during play based on where I walk. 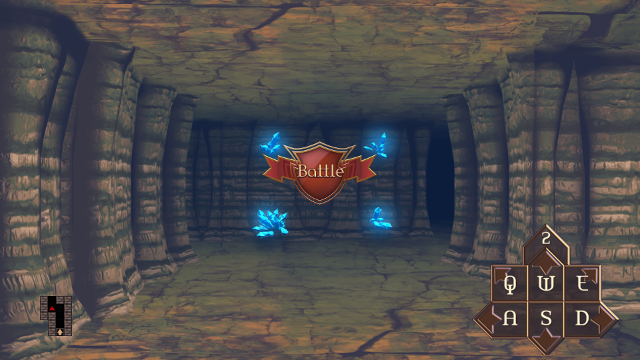 You don’t just *walk through* the dungeon, you actually *explore* the dungeon. Branching paths and all!

And just in case my paradigm wasn’t damaged beyond repair yet, I run into a floating Battle marker and find myself in a turn-based JRPG battle. 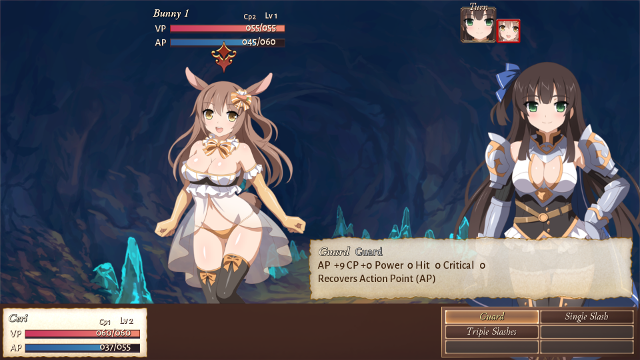 You have to understand that I’m not sure how to deal with this. I specifically picked Sakura Dungeon for my birthday week because I figured it’d be a short, silly VN romp. You know: bad writing, unsympathetic characters, glistening boobs, pointless scenes of people walking in on other people changing. Two hours of play time at the max. But then Sakura Dungeon had to have the gall to turn out to be an actual game. Look at this! I’m seeing health and mana bars, time-based turn orderings, different skills that are melee or ranged or magic or elemental… there are critical hit percentages. Critical hit percentages. 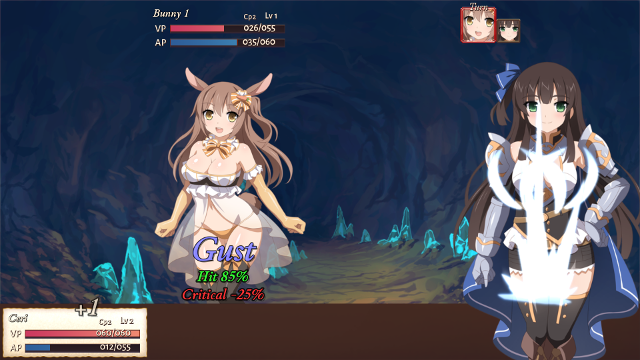 And then Sakura Dungeon pulls me back from the brink by revealing that, if you hit an enemy with a critical hit, their clothes get torn. 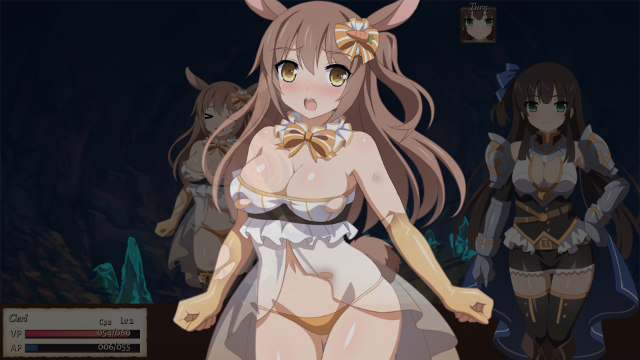 And in that instant, I understand: all is still right with the world’s core. 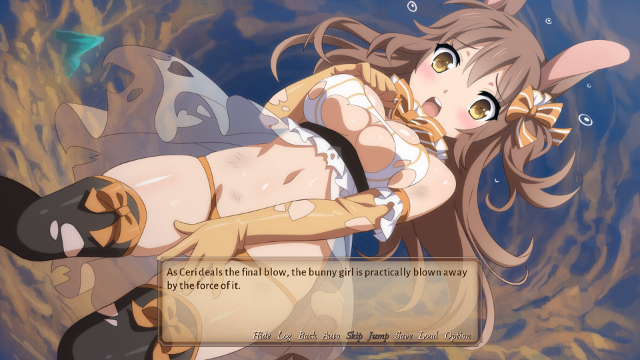 There’s even some celebratory bunny girl cheesecake after my victory.

Only to then shove me back towards the edge, roughly, by revealing that in this game you can capture monsters and add them to your party. 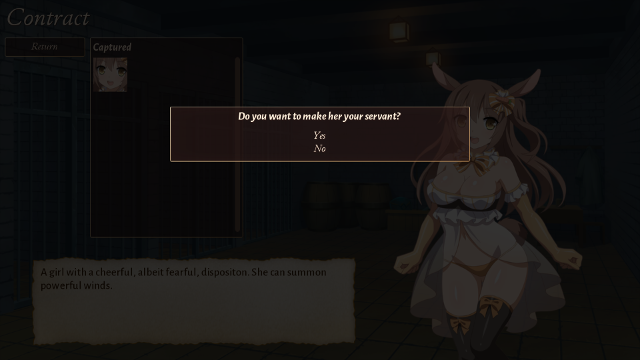 Again, this has *so* surprisingly little sexual undertones. You just add the spellcasting bunny to your adventuring party! It’s nothing more weird than that!

I’m not sure I’m ready for this. Like, spiritually ready. I… wasn’t prepared to be playing and judging Sakura Dungeon in actual game critic mode. How can I even? I’ve trained my brain to shut off every time I see those glistening boob-spots. I’ve never needed to think in their presence.

I need some time to mentally readjust before I can continue. Let’s hope I’ll have something more interesting for you on the second page, on the second floor of the dungeon and beyond, where the monsters are undoubtedly capable combatants who can afford to buy non-tear-away clown clothes.