You can sometimes tell things about a new game by its pre/early-release social media footprint. For instance, The Game Bakers‘ Furi was met with two very different responses on my Twitter timeline. Some people hailed it as a really good game, ‘incredible’, that sort of praise. And some people bashed it for being poorly developed, particularly in the area of responsive controls. It was either a possible game-of-the-year contender, or an unplayable mess that required sorting A.S.A.P.

You can imagine that, as a reviewer, this sort of thing has me salivating at the mouth. An incredibly polarized split of good and bad? And a chance for my testimony to be the deciding factor that finally, forever tips the scales? How could I resist? 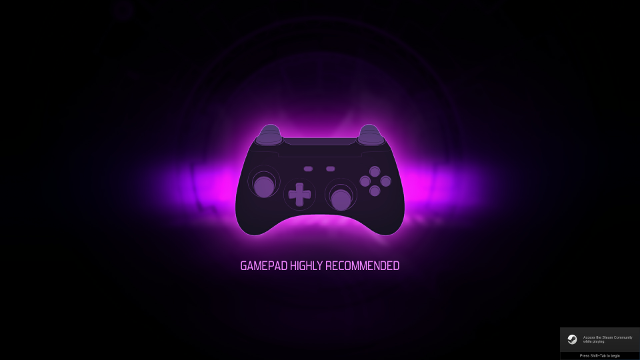 Furi starts off with options. Like, off the bat. It’s like this game knows me. They’re not particularly grand options, but still. 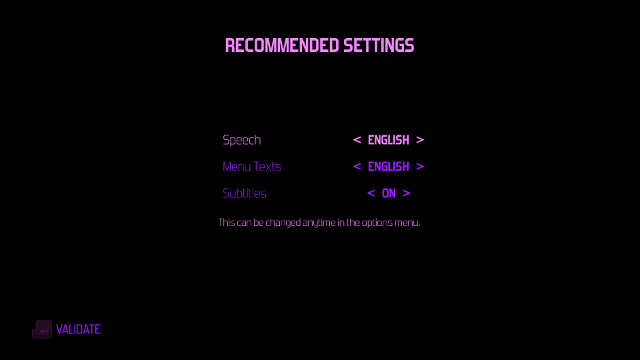 Honestly pretty good to get this out of the way.

And then, the title screen lands. For a while, it’s just the game’s name, stylized. Furi. And then it starts talking. “I hear thunder. Pitter-patter. Time to wake up.” 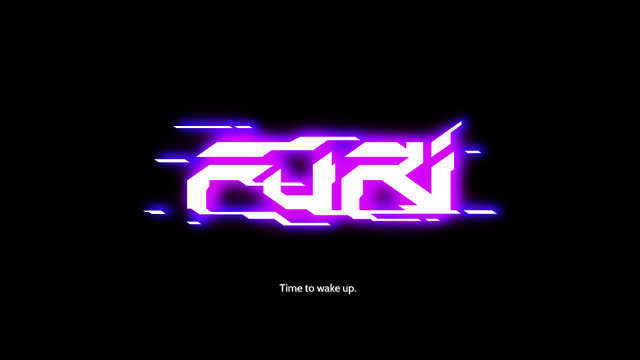 Wake up from what?

The screen resolves to… something else. 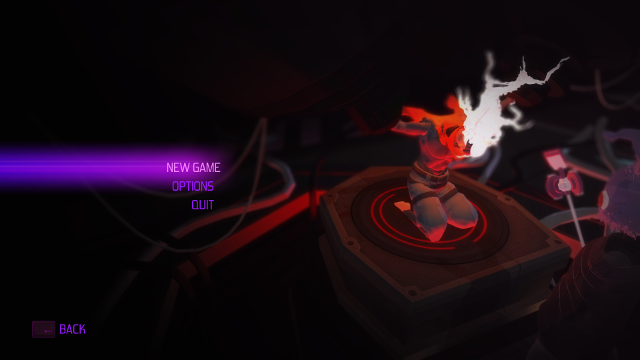 You know what, I’m not even gonna try describing this one. If your vision works, you can see for yourself. And if it doesn’t, I couldn’t describe this to any real satisfaction anyway.

Ignoring the visual weirdness on display, I explore the second Options screen. There’s more in this one than the starting one! The audio is there, obviously, but I also find a graphical overview of game functions as mapped to Xbox controller buttons. And a keyboard control variant, which comes highly un-recommended. Some limited visuals. There’s even a How To Play section, featuring ten short subtitled movies for ten different combat moves. 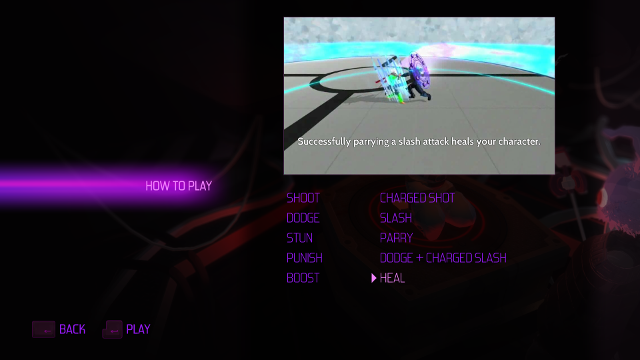 Which I guess kind of gives away that a big part of this game is going to be isometric 3D arena-style combat.

But since that’s all she wrote, I might as well start Furi proper! 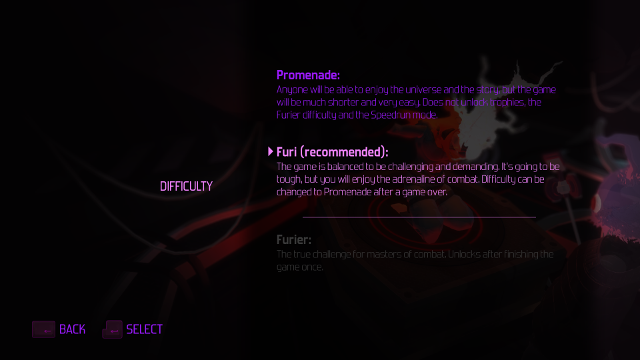 In what I presume is an ode to the artist formerly known as Prince, we start off underneath the purple rain. 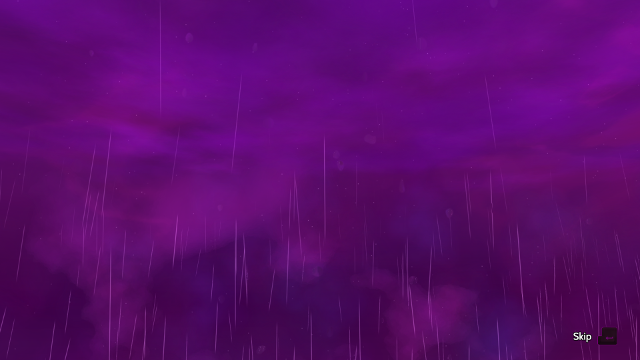 I do suspect that causing pain and sorrow is going to be high on the agenda soon.

A lot of confusing visuals happen in short succession. I could describe them all, but then we’d be here all week. And I’m honestly trying to lay off the ‘transcribe cutscenes verbatim’ thing. Does anything really enjoy reading all that? I’ll give you the important details: purple rain. Floating island with violet energy sparks. A tan-skinned man in a black/red suit with flowing white hair, hands captured by some kind of machine. Another man, with a face of three masks, taunting the first man and shocking him — like, with a prod. Then, a third man, darker skin and a disconcerting giant rabbit head. Or mask. 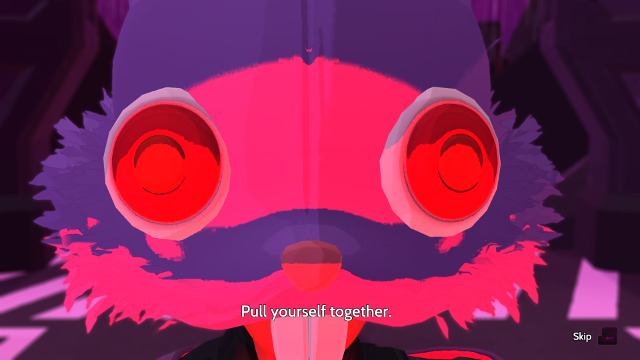 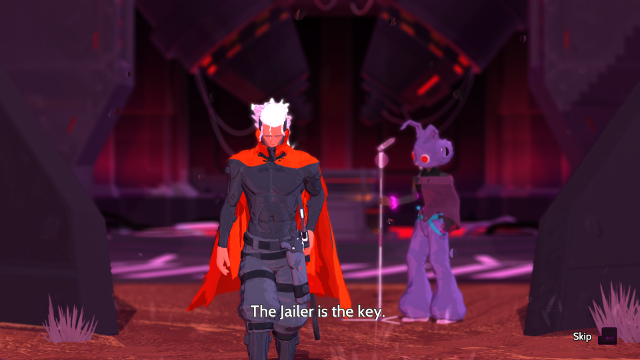 It’s that last one.

The game snaps to a behind-the-shoulder for the white-haired man. I now control him. I can control him to do one thing and one thing alone: walk across a linear stretch of land, to a purple light and an archway in the distance. Literally none of the buttons that aren’t the left analogue stick do anything. So, I guess I’ll walk. 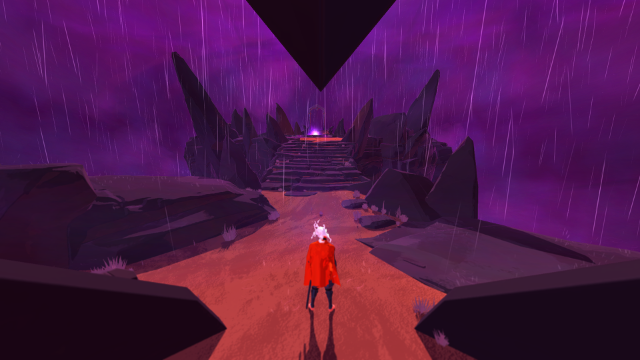 This will give me plenty of time to reflect on my Feelings.

Then, I reach the purple light. The three-mask man is there, standing around menacingly. And as one, the game snaps into action. The camera swings to an overhead view. HUD elements appear. The music pumps up. And a button prompt in the lower screen instructs me to violence in no uncertain terms. SHOOT. 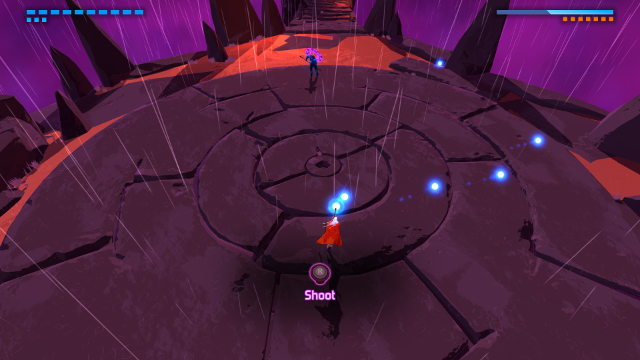 I shoot an endless stream of blue bullets from a handgun that I apparently have. As they impact the masked man — who stands around stoically — the blue health bar on the top right side starts draining into orange. Blue and orange, hah. Eventually, it turns full orange, and the man kneels to the ground, glowing orange. NOW SLASH, Furi says. 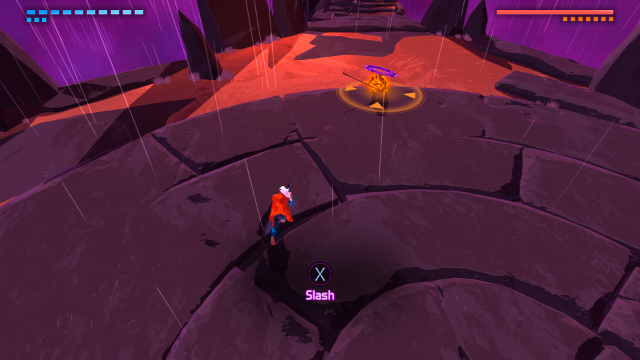 I press the X button, and my bright blue sword strikes out. I can slash in any direction I want, hammering the button for a simple combo. But when I hit the kneeling man, the game snaps into a different view. Before, the camera flew overhead and tracked me-and-only-me. Now, we take more of a side view. A bright blue circle extends outwards from the masked man, now standing again. As he moves, so do I, and I see that my movement has changed: before, the analogue stick moved in absolute directions (up is up, down is down, never the twain shall meet), but now, I instead move relative to the masked man. Forward, backward, and circle-strafe left and right. I find I can’t cross the blue circle, going backwards; seems like we’ve made an impromptu little arena here. 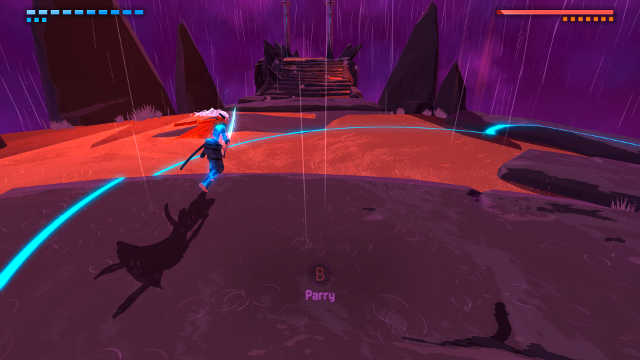 Like this. You can’t see the masked man because my screenshot timing was poor, but trust me when I say here’s there.

Suddenly, the masked man attacks! He swings his stick-prod in a wide arc, and it flashes bright white just before he strikes. And as the weapon flashes, Furi tells me, PARRY. So on the second attack-flash, I press B. And instead of his hit landing, I deflect. And then launch into a small cutscene where I kick the shit out of him. Hope you didn’t need that half of your health bar.

I wail on the masked man some more, further depleting his orange life bar into brown red and then black. Not all parries turn into spectacular cutscenes, but I can still attack regularly whenever he lets up his own attack. Parry, parry, parry, retaliate. And when I finally drain it…

A small cutscene plays. The masked man grimaces and blusters at me: “I was hoping you’d try to get out, so I can hurt you real bad,” that sort of thing. His health bars refill to full orange, then blue, as he gets back up. But I see the secret: underneath the health bar is a set of orange squares. It’s the same with my own health bar. But his orange squares? One of them just blinked out. 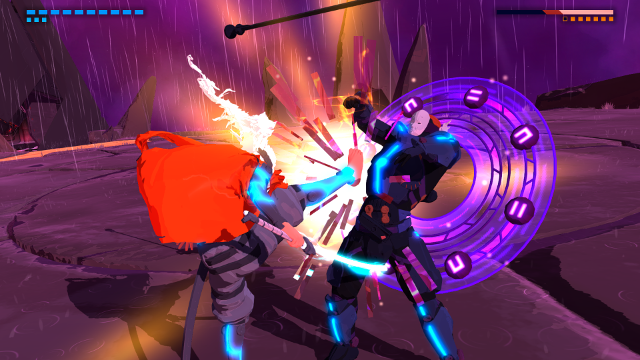 This calls for a celebratory kick to the sternum!

Over the course of three more health squares, Furi teaches me to play. Right analogue stick shoots, left analogue stick moves. X button slashes the sword, B button parries. A button (or the left shoulder buttons) lets me ‘dodge’ by way of short-distance instant teleportation. The slash, shot, and dodge can all be charged up, for respectively increased attack range and a special cutscene attack when it lands, a knockdown bullet that interrupts whatever the masked man is doing, and increased dodge range through longer teleportation. Very helpful for dodging bullet hell style waves of bullets. 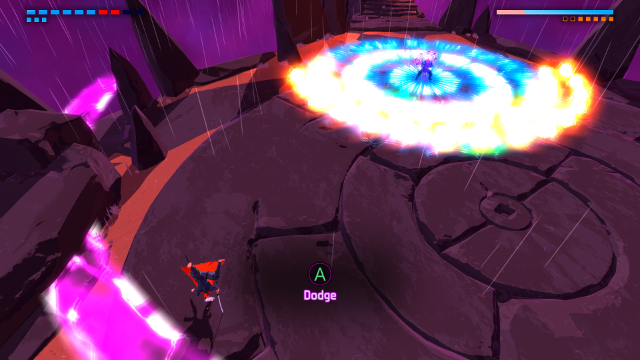 And every time, the fight seems to have two stages. In the isometric stage, I can move around, poorly dodge bullets, and shoot or melee as I want to. But when the blue bar turns orange and the arena appears, the rules change. In the side view, I can’t shoot at all; instead, the right analogue stick seems to charge my sword up. For… something? I honestly can’t tell. The isometric stages can be difficult to get through, but in the side view stage, this guy just seems to melt when I parry his attacks right. Which seems to be in equal parts ‘quick reflexes’ and ‘learning his particular attack patterns’. But I’m nothing if not marginally passable at both! 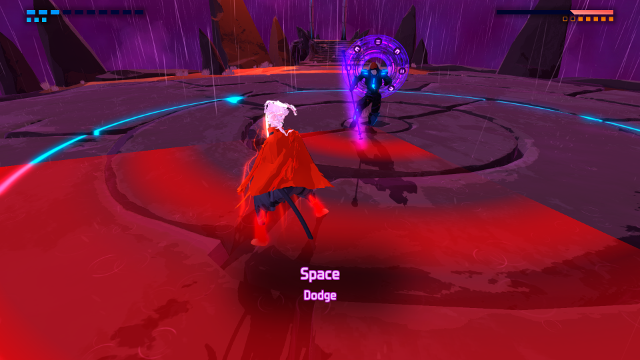 There’s also this sort of stuff, if you haven’t had enough of it in every MMO from the past eight years.

And then, after four health blocks of training, the kid gloves come off. And the masked man actually starts fighting back. He runs around the field same as I do, shooting and slashing and unleashing powerful bullet wave attacks. I dodge and parry and dodge most of those, as I’ve been doing, but it’s more difficult when your quarry isn’t standing still. In fact, he actually manages to take me out once or twice. 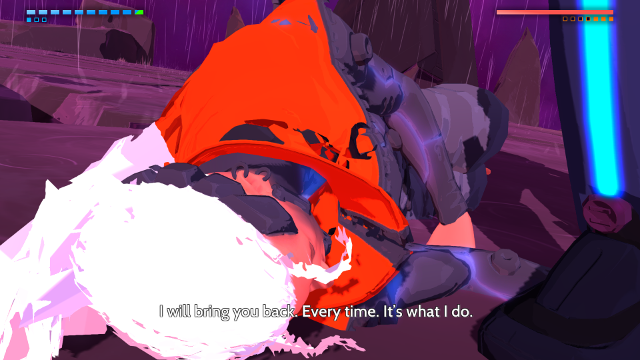 One of *my* health blocks is the loser this day. And then another. And after I fall, the ‘current round’ rests: both my health and his shields regen to full.

Interesting factoid, though: did you know that, if I beat the masked man in a round, one of my health blocks fully regenerates? I did not know this. It definitely doesn’t work the other way around: his health is lost forever. But when I finally manage to get my revenge on Masked Man Health Block #5… 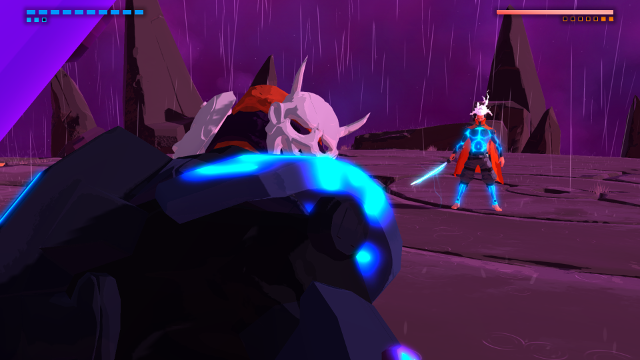 Health regen *and* a cool pose!

But during the sixth health block, the kid gloves, er, really come off. The game starts showing some of the difficulty I’d heard other people talk about. In theory it’s easy to fight this guy: I know what I need to do, and I know how I need to do it. But actually doing it is a problem of a different caliber. It’s hard to dodge his bullets accurately; sometimes I end up dodging right into them. It’s hard to time the parries correctly, and a missed parry means a hit for me. It’s hard to read all his special attacks at a moment’s notice. And it’s hard to stay alive for long enough to kill him. I can regenerate health, sometimes: successful parries restore a bit of health, and some of his bullets are green — earmarked as potential health pickups if I shoot them out of the air.

But it’s not enough. 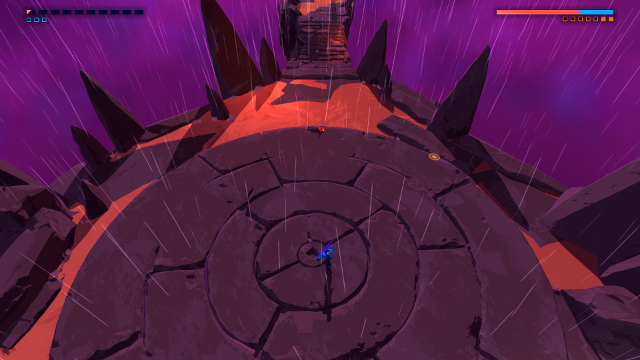 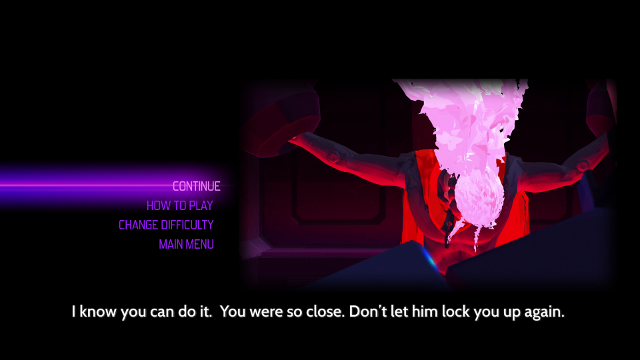 And then I go back to jail.

And then I get to start all over again. There’s nothing quite like doing the tutorial a second time. It’s like the game patting your head condescendingly. ‘Are you sure you understood?’

Yes, game, I’m sure. And this time, I actually make it to the seventh and last health block fully intact! Let’s see what surprises hide behind this do… 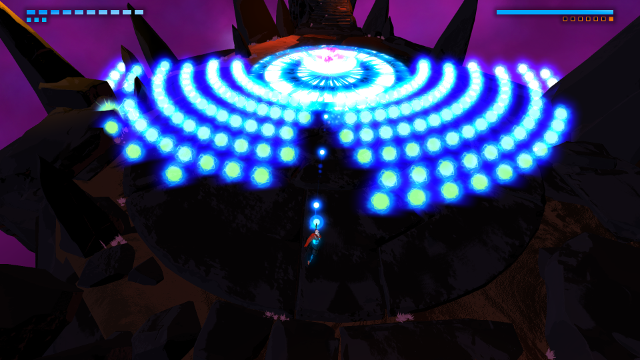 The masked man activates an Everything Proof shield and starts sending out waves and waves of bullets. That’s not fair! Sometimes unkillable bullets, too, which means I have to shoot my own path to dodge into and then actually dodge into it. It’s precise work, demanding, and I slip up more than once. I shoot at the masked man all the while, but it doesn’t seem to be doing anything. Am I supposed to…

Ah, no. After about a minute of this, his shield drops. I get in close and attack, shattering his blue health bar in one combo. This triggers the side view stage of the fight, which is… more of the same idea, apparently. A lot of strong, easily telegraphed attacks to dodge, while waiting for his bullshit turbo-shield to wear off.

And then it does. 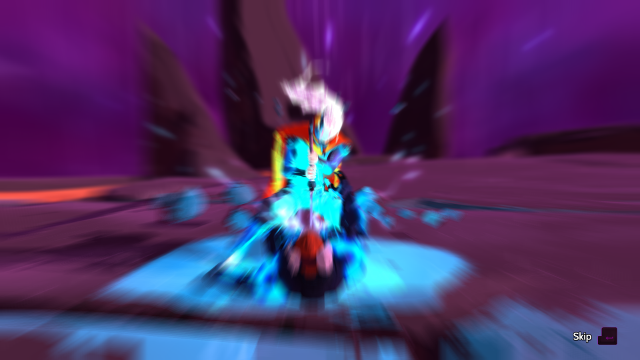 And then my character actually *kills* the boss in a cutscene.

Whew! That was… intense. I’m still pretty adrenaline’d-up! Heart racing, pulse pounding. But with the masked man’s death, an eerie silence descends over the game…

Rabbit-head guy shows up, applauding my victory. Where were you during all this, you asshole? But I guess you did get me out of jail in the first place. So we’re cool. And now that I’ve beaten the jailer, I should be free to escape this what-I-assume-to-be-a-prison, right?

Well… yes and no. I’m free to leave this prison world. But it turns out there’s more of them. A lot more of them. And I’ll have to traverse each of them to get to my nebulous, poorly-defined end goal.

And each of them is guarded. 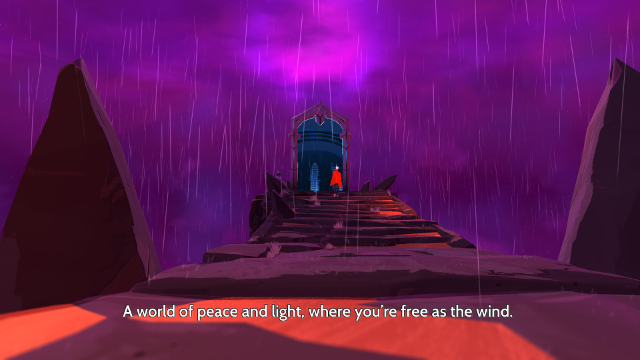 I think I’m seeing the shape of this.

Alright then. You can’t see it, but I just cracked my knuckles before writing this sentence. I know what I have to do. Reader, I will see you later. I have some more prison wardens to fight.