“Oh boy! Another Monday, another Indie Wonderland. I can’t wait to see what delicious slice of hot gaming pie we’re getting served up this week. Hey, I know: maybe looking at Jarenth’s Steam account can give me some clue to what he’s been playing this week…”

“Okay, cool, Stellaris then? That’ll do. Make with the word jokes, funny-man.”

Hmm. Okay, so. This is a little awkward.

“Jarenth, you’re gonna have to explain this one to us. What do you mean you ‘can’t review Stellaris‘? Isn’t reviewing things kind of your thing?”

No, you’re right, you’re right. And you were right before, too: I totally have been playing Stellaris with the intent to review. I could tell you what I’ve been doing, and I could even give you the early experience blow-by-blow: title screen, options, early getting-into-things, you get the gist. 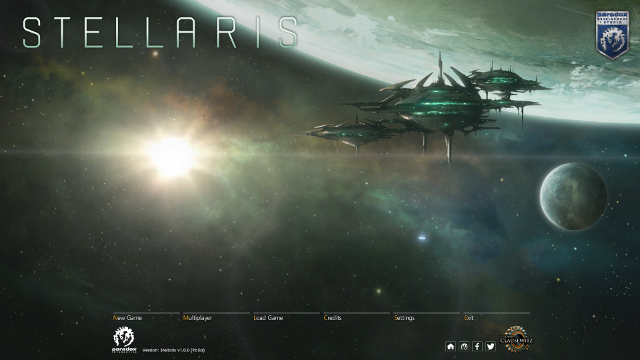 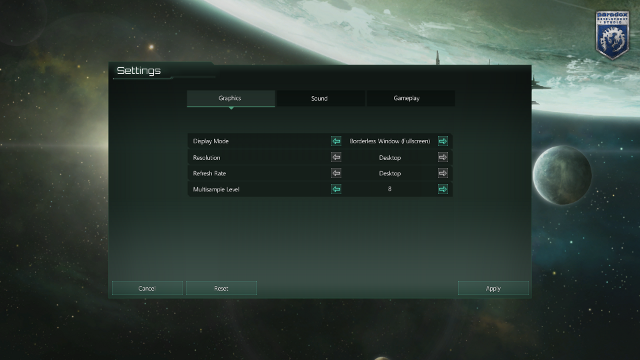 Here is the Settings menu. It’s sparse, particularly in the graphics area, but otherwise functional. 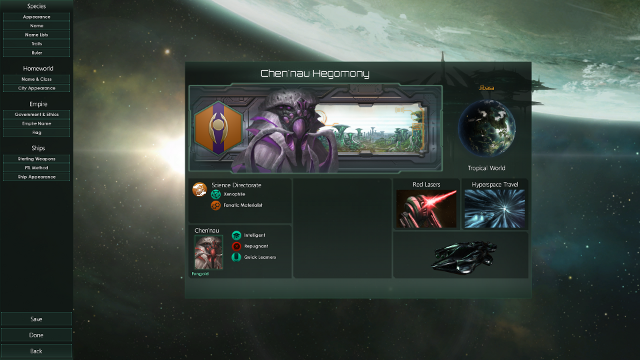 Here is the alien race that I made to play with. Contrary to expectations, they would actually go on to do fairly well. 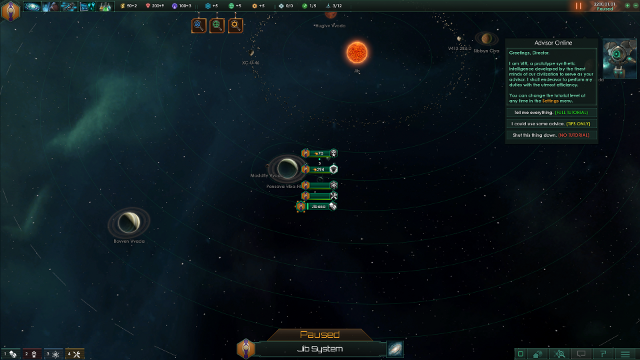 And here is me, realizing fairly early on that I’m about to experience the mother of all information overloads.

But I can’t actually review Stellaris.

Long-time readers probably know: I’m from the school of games writing that believes reviews are more than simple fact summaries. A part of a good review is telling the reader what a game does and does not do, but a review proper is more than just that. If you only want a game’s ‘objective facts’, I recommend you read a spec sheet instead. Here, I included Stellaris‘ Steam spec sheet, for your convenience.

…okay, so this one isn’t actually very useful for this. But listen: you get what I’m getting at.

When I review, I try to go beyond ‘just the facts, ma’am’. I want to tell you not just what a game does, but also how well it does it. And how I experience it. And how I feel about the bits and bobs, and what my feeling filtered through the lens of me as a player means for the game’s appeal for the manifold you, the readers. And how the game compares to other games. And how the game’s strengths and weaknesses, the pros and the cons, clash and interact and complement each other. I want to paint for you the picture of the experience, which is in so many ways always more than the sum of its parts.

I can’t do this for Stellaris. 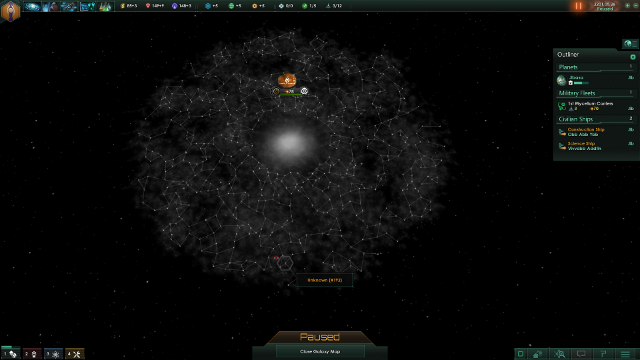 See if you can figure out *why*.

I can’t do this for Stellaris because there is so much to it. Stellaris is, to use a euphemism, a whole lotta game. It is bursting at the seams with systems and subsystems, ideas and possibilities and interactions. I don’t even know if I’ve seen them all yet! Let me re-iterate this for effect: I’ve played this game for over twenty hours and I don’t even think I’ve seen all the systems yet.

Note that this is different from saying ‘I haven’t seen all the game’s elements yet’. The latter is normal: of course some levels and weapons and enemies and art assets take longer to get to that others. But in most other games I play for the equivalent of one full day, at least I have the idea that I understand the systems beneath it. The action verbs, the interactions, the possibilities, the assumptions made of you-the-player. I put equivalently ridiculous hours into Stardew Valley, for instance, but it took me nowhere near as long to work out how all the bits click together.

In Stellaris, I keep running into new systems. Often important systems, which I often run into by accident. For instance: only late last night did I discover that if you defeat another star empire and turn them into your ‘vassal’, you can later try to ‘integrate that vassal into your empire’. This seems like an important aspect of empire management and diplomacy! I had no idea. 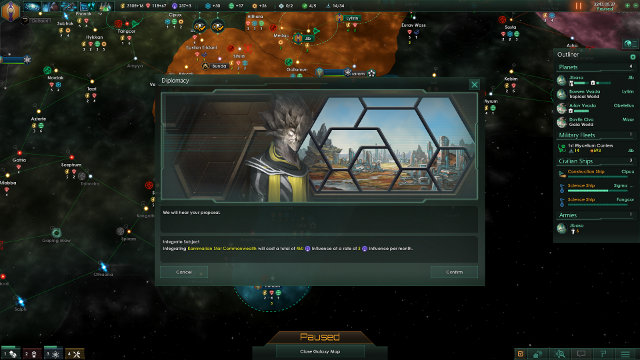 I’ve been looking for the option to get them to bake me cookies, but no dice.

It’s okay for a game to have these low-key or ‘hidden’ systems. I actually think this can help keep the experience fresh for longer? But the fact that I don’t know all of this yet — that I don’t even know what I don’t yet know — makes it damn difficult to write a meaningful review. Had I written the review three days ago, I might have slammed Stellaris for having very limited interaction with defeated enemies: ‘all you can do is vassalize them, and then hope they don’t rise up later, I wish there were more options’. 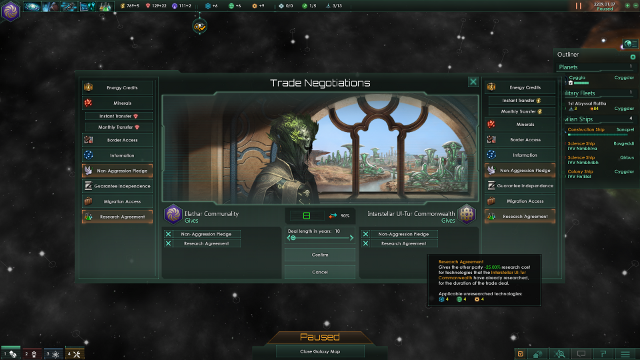 ‘You can trade with other races, and then sometimes they’ll really like a particular agreement even though it seems massively slanted in your favour. I… don’t know if this means anything?’

Oh, and I lack the wider experience to put this game in context, too. Stellaris is a Paradox Interactive production, they formerly known of grand strategy titans like Crusader Kings 2 and Europa Universalis. At first glance, Stellaris seems to be an entry in that same stable: grand strategy in space, 4X on an empire-planning scale. But it is… better than its historically-grounded predecessors? Is it worse? Is it comparable at all? I feel like there’s something of a fundamental difference in interests between people who say ‘I want to have proto-Bulgaria found the Holy Roman Empire’ and people who say ‘I want to conquer space as a race of science-minded mushroom people’. The former seems to provide enjoyment at least partially for ‘messing up’ history in fun and amusing ways, much the same way the Civilization line of games does. The latter seems to provide… mushroom people. 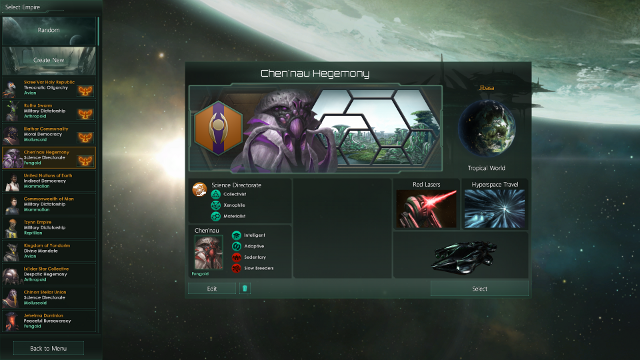 Hey, listen: if you play Stellaris at all, put these assholes in your game, okay? Empires you make yourself can show up as AI opponents in later games. So it’ll be like I’m there playing with you!

But are they comparable mechanically? In systems, in appearance, in bugs, in performance? I’ve already been told that things like ‘war score’ and vassalization show up in earlier Paradox grand strategy games. Does Stellaris stack up?

(For what it’s worth, I do actually think Stellaris feels more ‘approachable’ than, say, Crusader Kings 2. The full opening tutorial and the gameplay hints help a lot in making sense of your basic action expectations: this is what you want to achieve, these are the actions you should take to achieve this, and here is how you carry out those actions. It’s still daunting in size and complexity, but there is at least the pretense of you being ‘eased’ into it.) 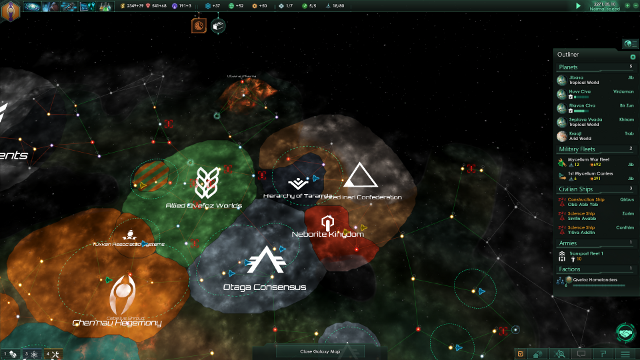 There’s just so much to this game. Planet building, colonization, empire management. Different types of planet habitability, depending on the world your species grew up on. A card-based research system that exchanges the drudgery of set tech trees for a luck-of-the-die progression. Point-based diplomacy, based on an eight-pointed system of various ethics and outlooks — all of which influence the AI races you meet to act and expand and trade in various ways. Ethics drift. Population factions and potential uprisings. Three initial weapon tiers, that expand into… gods, I don’t even know how many more. Ship design, station design, spaceport design. War goals, war scores, offensive armies, defensive armies. Alliances and Foundations, vassals and protectorates. Four different kinds of leaders, Governors and Scientists and Admirals and Generals, all of which have special powers and can level up over the course of their life — before they die. One of several starting storylines involving a ‘precursor’ race. Space anomalies. 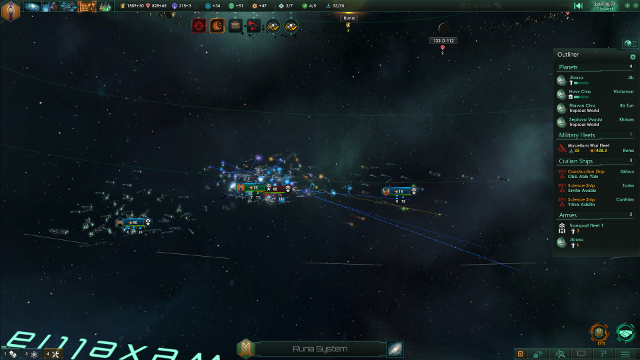 And look at this majestic space battle where I have no idea if I’m doing it right!

Anyway. I could go on listing examples, but the point is: I can’t give this game a good review. I am, for the first time, defeated. Stellaris has overwhelmed me with scope and complexity. I have actually tried to put some meaningful points to paper, but every time, the result just came out to more or less this:

Something That Is Struggling To Approximate Being A Stellaris Review 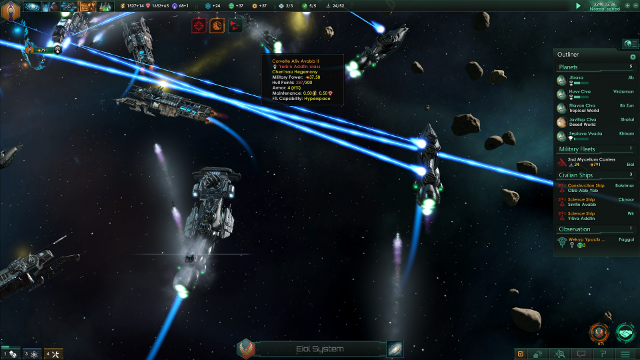 There’s only one really meaningful thing I can tell you about Stellaris, and that’s this: I’ve played this game for two dozen hours at this point. And when I finish writing this review, I intend to dive straight back in. I’m not sure if this is if I want to see all the systems and mechanical interactions if it kills me, or if I want to see how fancy large ships and colonies get, or if I just got weirdly attached to my science mushroom people and my happy mind flayer friends. Whatever the reason, though, it cannot be denied that Stellaris has its hooks in me.

It will run you a variety of pricing tiers, starting at forty Steam dollars, to give Stellaris a chance to gets hook in you, too. This is a fairly high price point for games, particularly when it comes to jumping in blind. I hope that my disjointed rambling here has at least given you some of the insight needed to make that call for yourself. 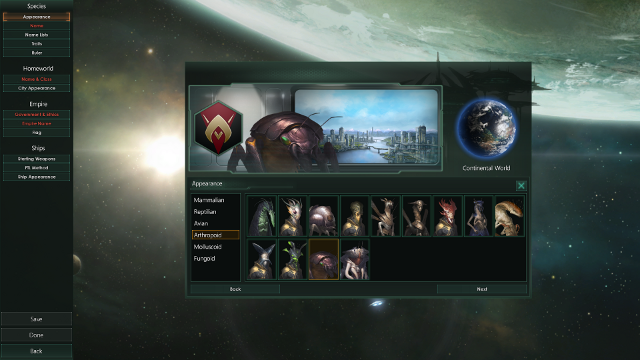 Act now, and you too could run an empire of space cockroaches.

Jarenth has space wars to win. Follow him on Twitter to get the occasional #StelJarris space war live-tweet, or hang out with him on Steam to provide moral support. Or moral detraction, whatever makes you happy. And if you dig Indie Wonderland and Ninja Blues in general, why not consider supporting our Patreon campaign?