Released almost exactly one year ago (at time of writing), Behold Studios‘ Chroma Squad grabbed my attention some when I stumbled into it on Steam. A cool pixel-art looking tactical combat game about colourful costumed warriors of justice? Except it’s also really about running your own Super Sentai-style studio? Yeah, sure, that sounds like something I’d be into. So I put the game… on my Steam wishlist.

Guys: my Steam wishlist is where games go to die.

But never let it be said that fate doesn’t intervene, every now and again. And more to the point, never let it be said that Steam’s incessant ‘hey, now this particular game on your list is ten percent off or whatever’ emails don’t have some use and value. The first time I ran across Chroma Squad, I decided to put it in my wishlist; now, the second time I run across it, I’ll decide to take it out.

I’m starting to feel I made the right decision. 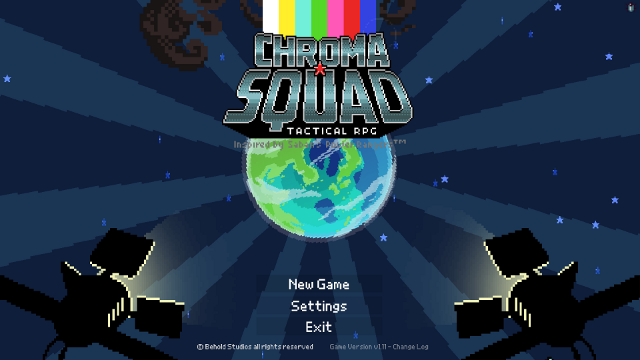 The best part of this title screen isn’t even the art style, or the colourful palette. It’s that an actual anime-sounding theme song is playing in the background.

Title screens are important. Title screens are your gateway into the rest of the game. They lose relevance on repeated launches, when you know what you’re getting into and you just want to get back to the action. But especially on a first launch, feeling out the uncertainty of a new game and your decision to spend your precious play time, a good, enthusiastic title screen can be an incredible mood-setter. And Chroma Squad‘s title screen delivers on that responsibility: I’m sitting here, watching this and listening to the song, and god, I really want to play this game now! I’m hyped!

I’m so hyped I won’t even spare more than a few seconds grumbling about this under-equipped, content-devoid options menu! 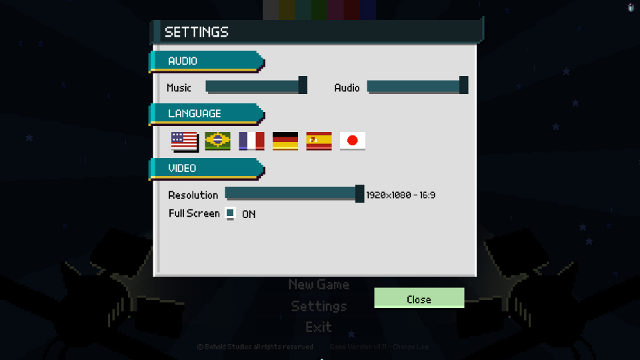 For real though, there isn’t a whole lot to do on this title. The options scream either ‘mobile game focus’ or ‘trying to keep things accessible’, and I’m honestly okay with either. Without any other distracting elements, Credits and Extras and whatnot, it naturally funnels players to starting as quickly as possible. It’s not something every game can do and should do, but it’s a choice you can make.

And speaking of choices… 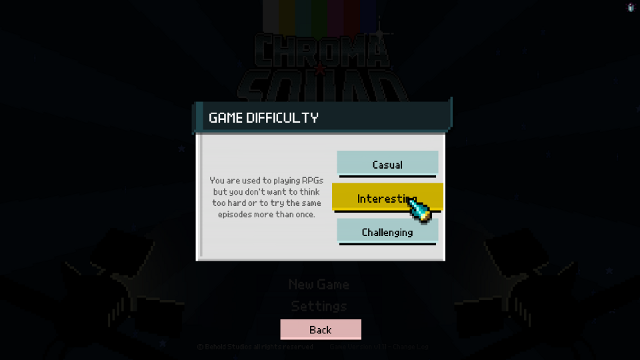 Chroma Squad scores some cool design points right off the bat by actually explaining what its three difficulty levels *mean*. Do you just want to have fun and play the story? Do you want the game to push back a little, but probably guarantee your win anyway if you spend some time learning the systems? Or do you want your systems mastery to be significantly challenged?

I do like my games to be Interesting. Let’s see what Chroma Squad has to offer in that department, shall we?

We enter the action in a TV studio. 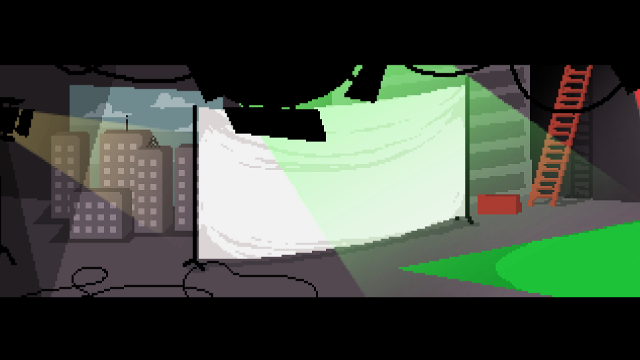 “Once upon a time, at a TV studio just like any other…”

Smash cut to a different, isometric 3D-view of the studio. We’ve stumbled into the middle of a recording, it seems. Identical-looking sound-and-camera teams are set up on the edges of the green. And off the side, next to an angry, yelling director, I see six people in somewhat-colour-coded outfits lounging on studio chairs. Ah, I’ve seen enough Power Rangers to see where this is going. These six normal teenagers with attitude are going to be the story’s chosen heroes? 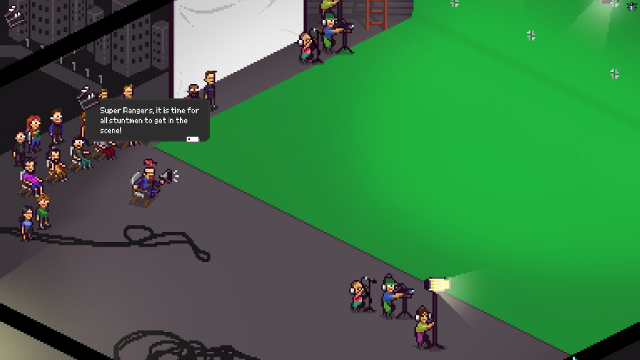 You can’t see all of them because of how loudly the director is yelling.

I don’t know if I’ll ever find out the actors’ real-hero status. Because after the director finishes yelling, the focus shifts to… the stuntmen. Five nameless, faceless characters, in actual colour-coded Super Sentai outfits, run onto the green. 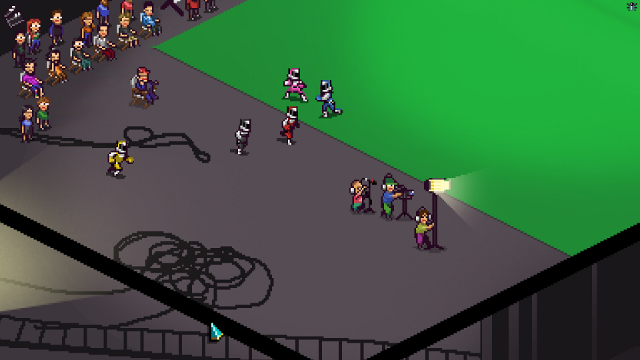 They’re followed by some putties, walking or running onto the set or simply appearing out of thin air. 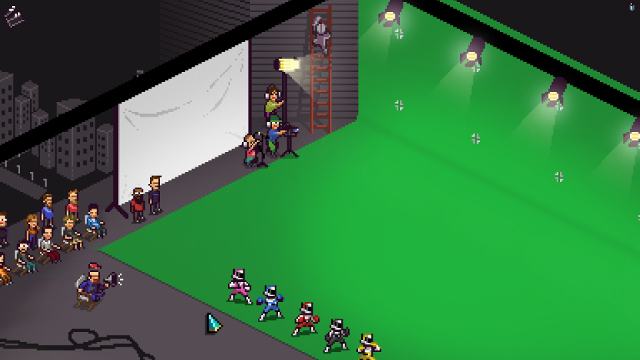 I don’t even want to know what this guy was doing up there in the rafters.

The characters and the monsters exchange some banter. You know, classic Power Rangers stuff, like: “I guess our show doesn’t have a whole lot of story, huh?” “Yeah, but our director, Dr. Soap, doesn’t like that sort of stuff very much.” “This show is getting boring, though, I…”

We’re interrupted by the director yelling tutorials at us. 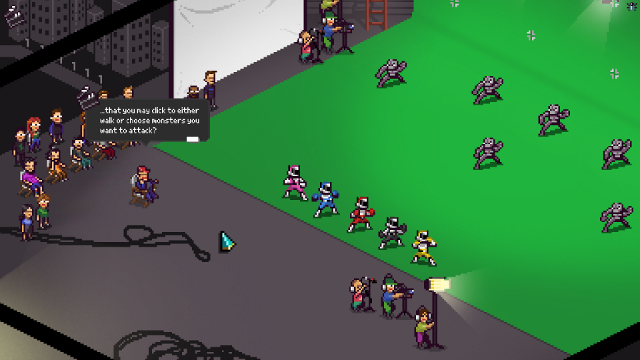 “Stop talking while we’re recording! Battle them! Or should I remind you…” 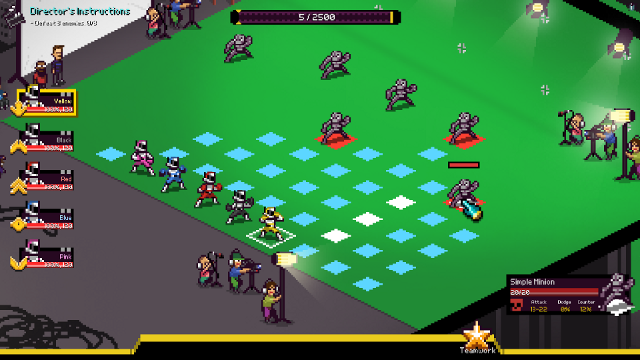 I start out controlling the yellow ranger, for reasons that I’m sure are reasons. They’re within walking-and-punching distance of three Simple Minions. So I have them take that thought to its logical, director-instructed conclusion. One click, and the yellow ranger jogs over to a monster, and hits and kicks it a few times in a fancy-looking simple combo. The monster takes damage with the first two strikes; the third one kills it, dissolving it into a cloud of smoke and particles as the ranger does a cool victory pose. 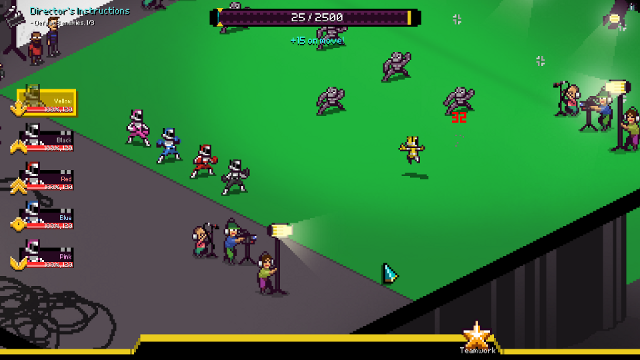 …Wait. Aren’t these ‘monsters’ just people in costumes? How did they…

Control shifts over to the black ranger, so I have them take out a monster, too. But after that, the other three rangers can’t actually reach any enemy. While the game never quite spells this out explicitly, I quickly understand that each ranger gets two action points per turn — as shown on their portraits. So they can walk twice, or walk and attack. It feels XCOM-esque, for lack of an immediate better comparison piece.

On their turn, the remaining monsters punch my rangers. Then, on my turn, I punch the monsters right back! I get all four remaining putties in this turn. Every time I take one down, a bar at the top of the screen increases. And when I beat my third monster overall, and meet the ‘Director’s Instructions’, the game explicitly tells me that these are ‘audience points’. 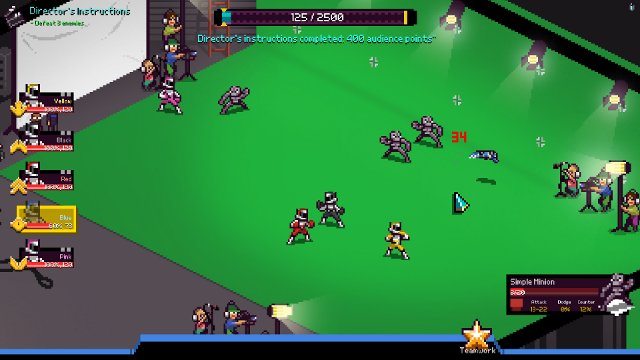 Why would I be getting ‘audience points’ for a show that’s still being filmed?

I beat the monsters and fulfill Dr. Soap’s demands. He is pleased. 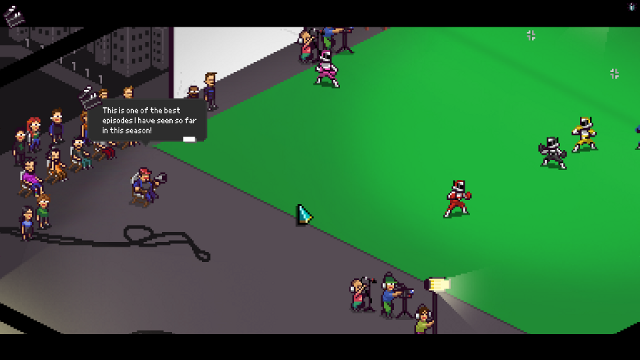 My rangers are not. 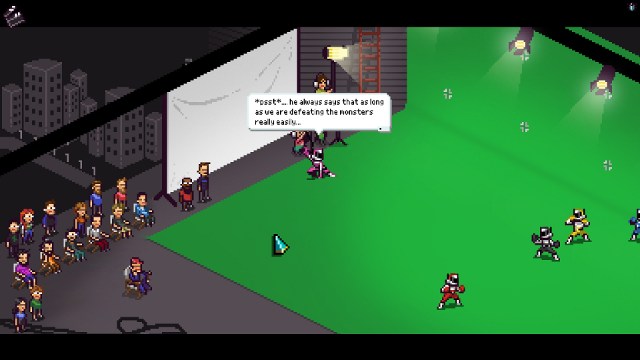 I guess Dr. Soap just has particular preferences. Is that not okay?

Second round of shooting! This time, Dr. Soap wants acrobatics. What this means in game terms is that I have to let my rangers use the star-shaped ‘Teamwork’ button, bottom right of the UI. Doing so freezes the ranger for the turn, and makes them strike a fancy pose. Then, when other rangers track a movement path past the Teamwork-er, they get thrown in the air for increased reach and particular coolness. 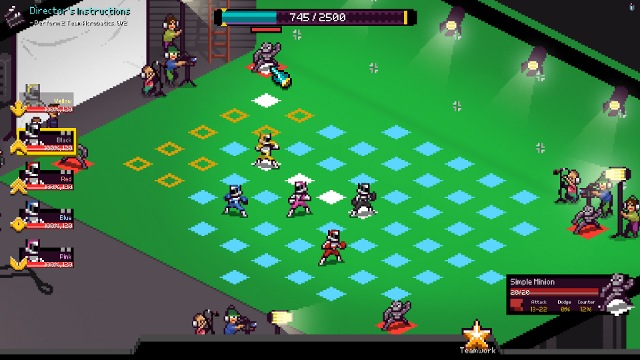 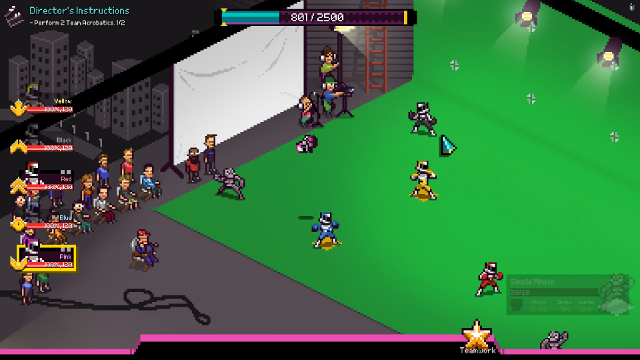 A ranger standing in the Teamwork pose can throw essentially unlimited squadmates in a single turn. Talk about a range boost, huh? And because of the particulars of who can move where and how far, I also accidentally learn that I can totally select the turn order of my rangers myself! I thought we were just going down a list, but no: I can select rangers at will, and even switch away from rangers that have one action point remaining. Which is a lot more flexible than I gave Chroma Squad credit for. The fact that I’m discovering this in the acrobatics phase of the tutorial is probably some kind of serendipity.

But Teamwork is good for more than just acrobatics. Because when one ranger stands next to an enemy and does the Teamwork pose… and then another ranger attacks that enemy… 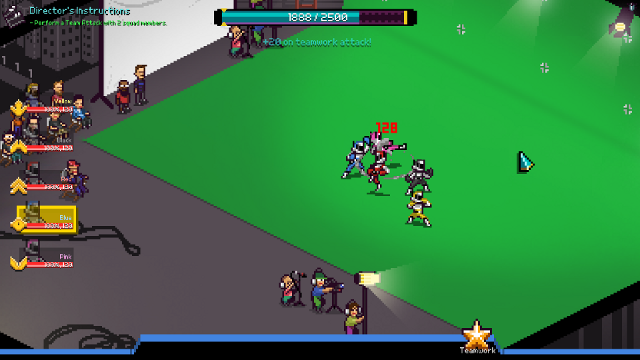 They get punched into dust before they can even get a pithy one-liner off.

These team attacks work with any number of rangers. Two, three, four… But obviously, when the boss monster suddenly appears on-set, there’s only one way a team of super rangers can proceed. 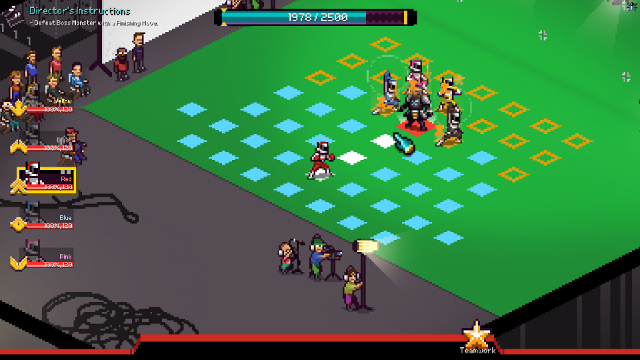 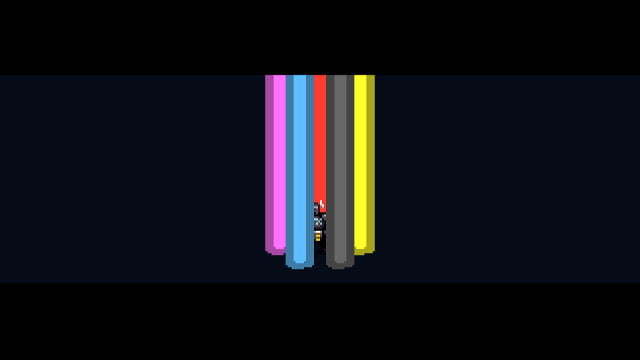 Yeah! Episode shot. The whole thing was caught perfectly. And everybody’s happy! The director’s happy, the actors are happy, the stuntmen…

The stuntmen are actually not happy. They feel undervalued and underappreciated. They feel like they’re doing all the work ‘while the actors just sit in their chairs’. They feel stuck in the studio, forever trapped behind a green screen. They feel this show lacks story, and compelling drama, and audience draw. They feel… 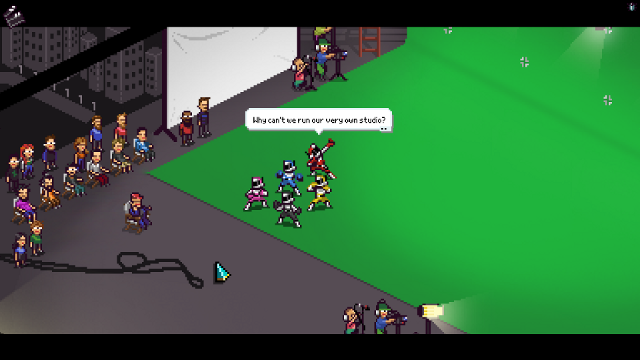 They feel they can do *better*.

And so it is that, after only one series of tutorial battles, the five stuntmen abandon Dr. Soap’s recording studio for good. They’re going to strike out on their own! And I’m going with them, of course. You don’t control five people in deadly battle against totally dangerous monsters without forming a bond of sorts.

Then… a bunch of things happen. Listen, I’m not gonna spoil the whole story opener, a game’s gotta have some secrets. But let’s just say that at some point, this happens: 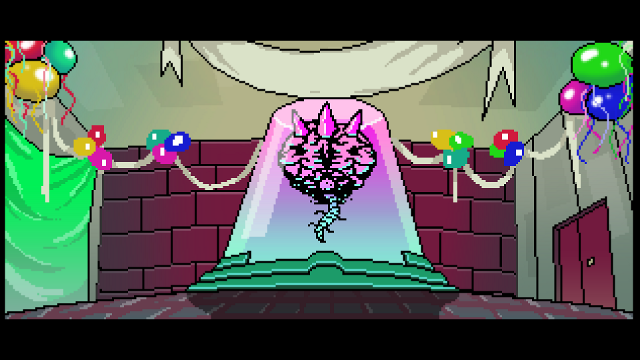 ‘Jarenth, please give us some context for this!’ I WILL NEVER

I sign on with the stuntmen’s new studio, too. At least, I think that’s what I’m looking at? A contract is definitely presented to me. ‘Record four episodes and a season finale, and don’t lose all our fans, and we’ll pay you a thousand bucks’. I can’t tell if this contract is supposed to be for me, the player, or for the stuntmen slash studio owners. But whatever: a thousand bucks! 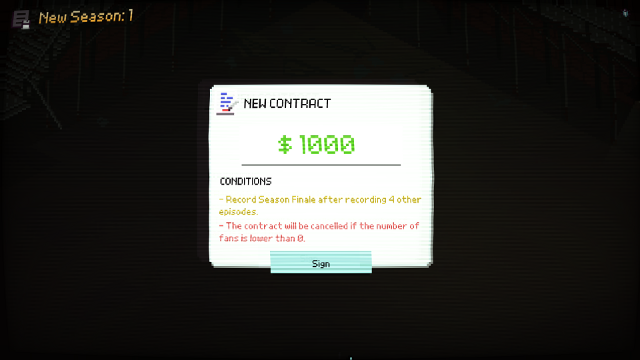 There’s probably no way this can fail!

I even get to name the studio! 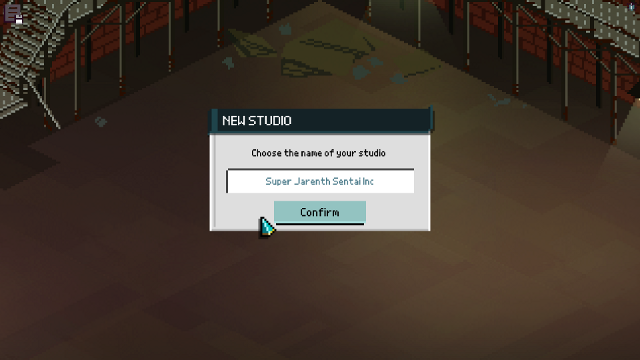 Perhaps more saliently, I get to name the stuntmen, too. We haven’t actually seen the people beneath the suits yet, so they could be anyone. Specifically, they could be five people — or robots, or aliens, or anthropomorphic beavers — drawn from a set of about three dozen.

I actually have to assemble my own Super Sentai team proper, here. There are five rangers, each with a different specialty: Assist, Techie, Lead, Assault, and Scout. Each ‘class’ provides a different combat role and different bonuses. Then I have to select a particular actor for each role, each of which also has their own set of bonuses. The actors have names, but the show characters need to have names, too. And who said anything about being stuck with our original suit colours? The sky’s the limit, baby; the sky, made up of fourteen different colour options. 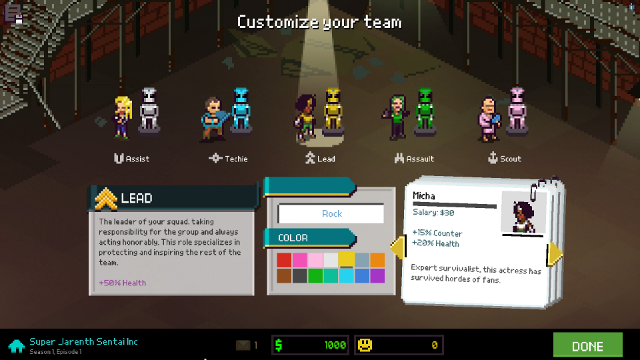 What I’m trying to say is that there are a *lot* of possible permutations in building this team. The actor selecting *alone* took me a maddening twenty minutes.

I feel the process of making these choices would feel less like stumbling through a dark maze if I knew what most of these statistics do. I mean, ‘+50% Health’, and ‘+3% Damage’, that I can intuit. But what the hell does ‘Skill Regen’ mean? Or ‘Crafting Quality Rate’?

I make some choices. I have no idea if I’m making the right choices. Or if these choices are going to come back to bite me later. But listen: they’re my choices, and I stand by them. I have to believe that, with this little prior information and playing on not-the-hardest-difficulty-level, I’m incapable of screwing myself over too much at this point on time.

Now then, if you’ll excuse me? The Super Jarenth Sentai Inc team of Rock, Grace, Crash, Know-How and Starlight have their inaugural episode to shoot. 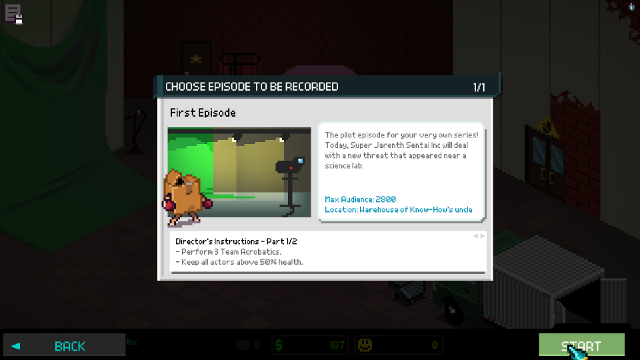 Yes, the big monster we fight in this episode is literally a dude in a box with boxing gloves on. *Yes*, they’re called the ‘boxing box’. And yes, I’m entirely prepared for this venture to end in internet humiliation and financial loss.

Check back in after I wrap this first season up!