I don’t know if anyone, not even the creators, expected SUPERHOT to become as wildly popular as it did. But become popular it did, and one well-funded Kickstarter — $250.000 of the original $100.000 goal — and 2.5 years of development later, here we are. Are all o’ y’all interested in seeing if Superhot Team managed to put together something good? Because I sure am.

(Spoiler levels: Narrative, complete (though spoilers are marked). Mechanical, also complete, but that’s not as big a deal as you might think. Super, hot.)

(Game source: Backed it on Kickstarter.)

“piOS”, SUPERHOT opens, “operating system of the future (TM)”. It doesn’t look ‘of the future’ to me. 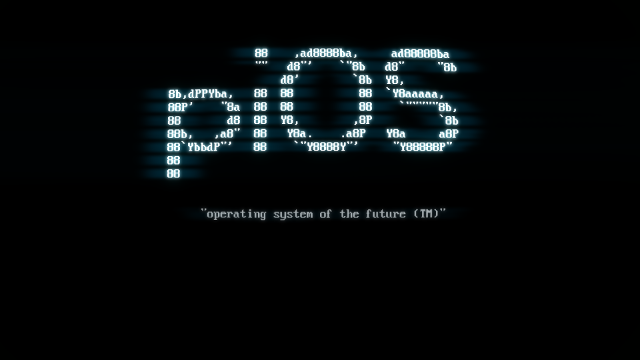 Welcome… to the FUTURE PAST.

I figure that this Ye Olde Loading Screen is a company splash, or maybe a throwaway joke, but nope. SUPERHOT title screen looks for all the world like an artist’s reinterpretation of what the DOS era must have been like. Bright white lines on black background, folder structure laid out in all-caps ‘Code page 437’ font. C:\ in the lower left corner. Even the noises evoke a different time in computing, though what I’m hearing pings less ‘DOS’ and more ‘dot-matrix printers and shitty dial-up’.

A small screen pops up in the center before I can do much of anything. “INCOMING MESSAGE,” it reads, “PRESS ENTER TO REPLY”. 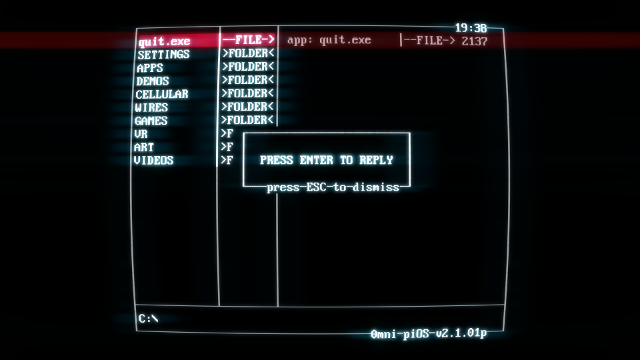 Sure, I remember this from my own DOS days. Ubiquitous network connectivity and clearly-defined user commands.

I find myself in ‘guruCHAT’, the absolutely no-frills-attached chat program of the year however-many-this-is. I hear typing noises, and a message appears in the top right corner. “You playing superhot yet? I’ve never seen anything like it”.

Another box pops up on the left side. TYPE. So I type. I intend to type ‘who are you and what is this’, but what actually comes out is the much more subdued ‘What are you talking about’. 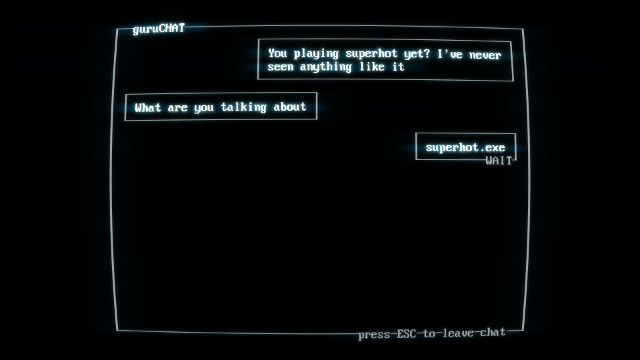 So add that particular command to this game’s list of lies, I guess.

“superhot.exe”, my chat partner answers. “it’s a crack”. “logs you into this company’s site so you can play this game. Sick shooter!” That, that’s what we’re going with today, then? I’m DOS-hacking into a company’s server to play the game I’m currently playing? Except it’s not even ‘hacking’: my script-kiddie friend is sending me a cracked executable as we speak. 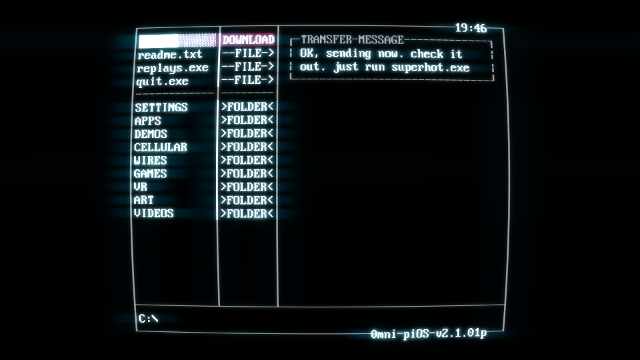 Which actually does bring it a little closer to my lived ex- I MEAN I’D NEVER CRACK GAMES, THAT’S *BAD*

Of course, I’m not actually launching the newly-christened superhot.exe just yet. I have to explore the file system first! It’s a… strange experience. The SETTINGS part of it is obviously an options menu by any other name: CONTROLS, GRAPHICS, AUDIO, and a restart option that wipes all game progress. But the rest is… confusing? It’s folder after folder of weird stuff, pixelated drawings and animated wire schematics and some sort of automatically-running ‘chat’ server. There are even ASCII-art renditions of 3D objects and virtual reality, like this cylinder: 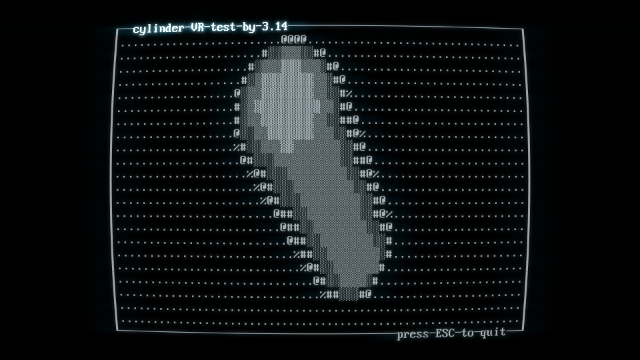 But, in time, there’s nothing to put me off the core task any longer. I select the superhot.exe option. White pixels jump onto the screen to form a rectangular gateway, blocking out all other menu items. And then the gateway starts moving forward, implying that I’m moving forward… faster, and faster, and then the screen bursts into flickering white lines… 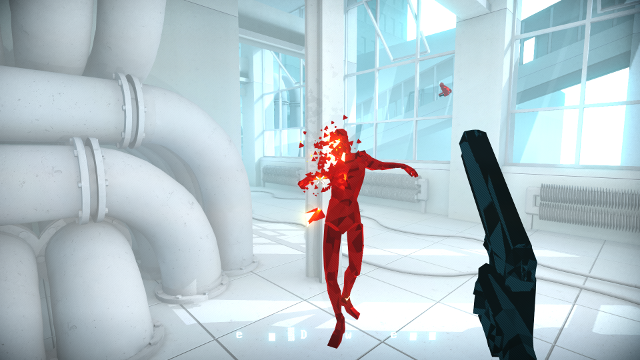 Talk about your *in medias res*.

Ah, now see. This is the SUPERHOT I remember. White aesthetic, black gun, red person disintegrating from a shot to the shoulder. Another red person in the distance, rushing to investigate. Really ought to reconsider, Red Person The Second!

“TIME MOVES ONLY WHEN YOU MOVE”, SUPERHOT helpfully flashes on the screen. This is objectively false: while things aren’t moving very quickly, I can clearly see the red-person-shards in front of me moving. Very slowly, though. They speed up significantly when I move. Time goes by so slowly for those who wait; I think, very likely, that this might be the first time Madonna’s singing has ever accurately predicted video game mechanics. 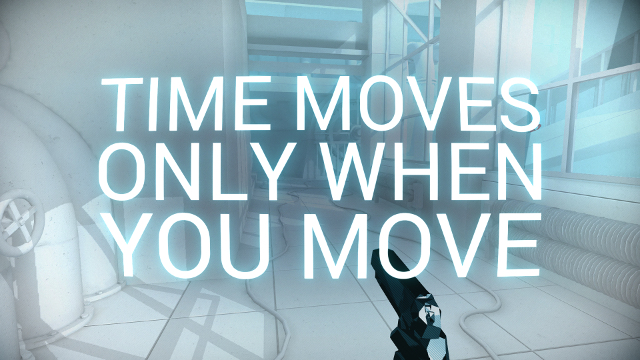 And yet *more* lies, SUPERHOT. Have you ever told me the truth to begin with?

Alright then, let’s move out! I run into the hallway; when I run, times seems to move at full speed. From a side passage to the left, further up, another red person runs into view. They turn towards me and aim their handgun, and I stop running just in time to catch their first bullet whizzing slowly by my ear.

As I stand still to admire the eerie intimidating beauty of this frozen bullet, only turning my head to follow it, I hear a slowed-down *blam* from the side. See, time does totally move when standing still: that cheeky red person just fired a second bullet! But two can play at this game, person. 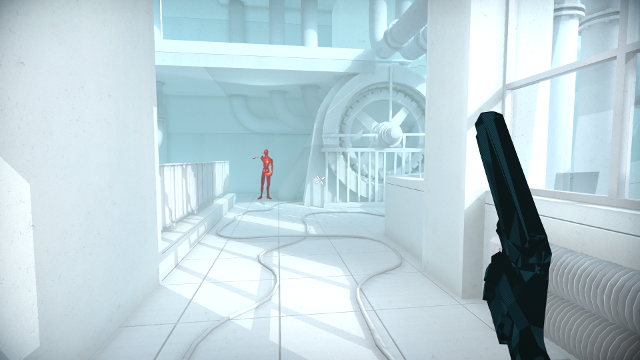 And only one of us has the benefit of super-enhanced reflexes.

My bullet slowly, slowly whizzes its way towards the unmoving head of the red person. I’d say it’s a thing of beauty, if it didn’t feel so unnecessarily morbid to write that about shooting a humanoid figure in the head. Still, I can’t deny I’m entranced. So entranced, even, that I fail to notice that the bullet coming in my direction is set to miss my own head by approximately negative three centimeters. A sickly *thud* and a quickly graying screen are the last things I see in this life. 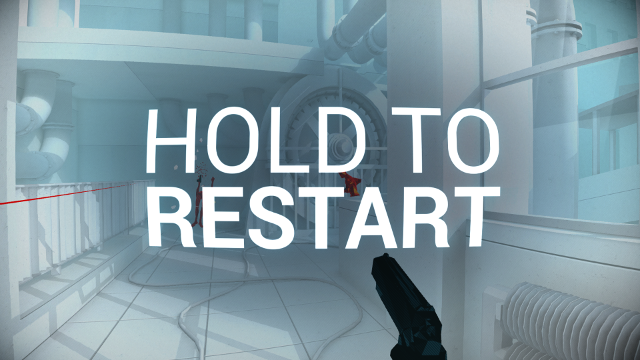 Luckily, SUPERHOT anticipated I would fuck up this simple task!

“SUPER”, the game flashes on my screen in white letters, as my character throws away their gun for some reason. “HOT”. Then it gratuitously starts replaying my exploits, full-speed this time, as it repeats the catchphrase over and over again. ‘Look at the cool thing you just did! And remember what game you’re playing! I sure remember.’ 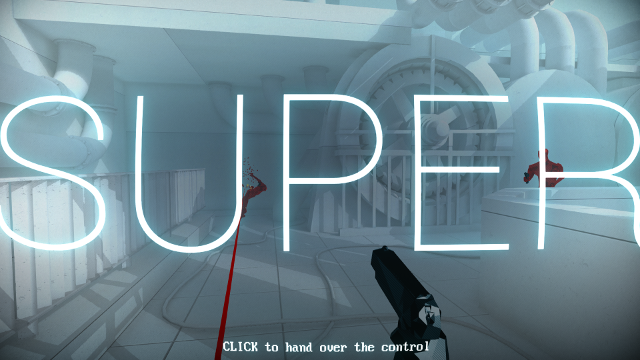 Not sure I like the tone of the bottom text, but: look at how well I shot that red dude in the head!

Second level! This time I’m in some sort of car park. “GRAB A GUN”, SUPERHOT flashes, and I quickly make my way towards the gun in the unlocked trunk. Flashes of red light emanate from hidden hallways and behind corners; sure signs, I’m guessing, that Red People are coming. 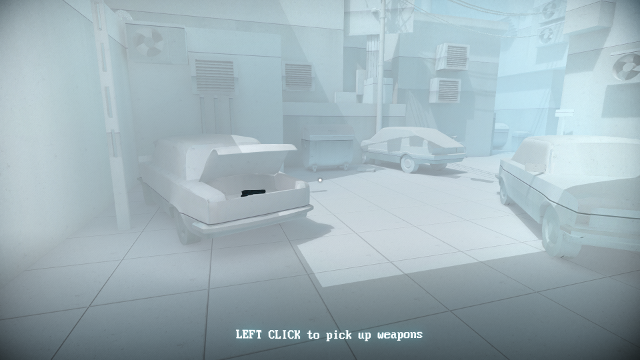 I kinda dig this environment. It’s like someone built a really complicated world model, then just… bleached out all the colour.

Except, it turns out the replays aren’t just gratuitous. They also host some form of playback control. Using the arrow keys, I can move through my own actions, speeding up or slowing down or even rewinding altogether. And that’s not all: there’s also…

Well, I know there’s something. I just can’t quite make out what it is, thanks to the interaction design genius who didn’t catch that using white text to introduce new controls doesn’t jive super well with a mostly-white level background. 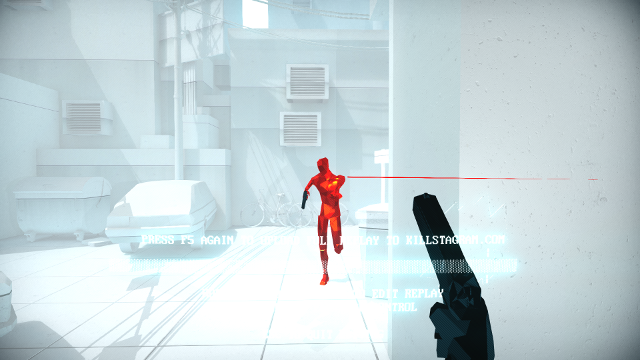 This is seriously the best screenshot I could get.

All is forgotten in level 3, an endurance stress test: me on the one end of a long hallway with no gun, two red dudes on the other hand, fully armed. My bullet-dodging skills are put to the test as I carefully maneuver my way to the center of the room, where a previously-killed red dude dropped a much-needed handgun. 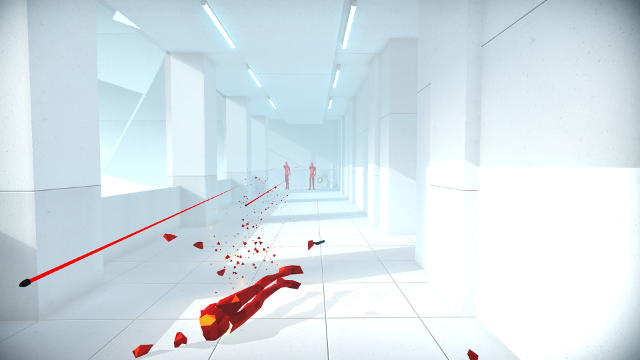 And level 4 pretty neatly teaches me the art of gun-throwing: when you start off across a red dude with a gun, and trying to fire your own gun just brings up an empty *click*, what the hell else are you going to do? 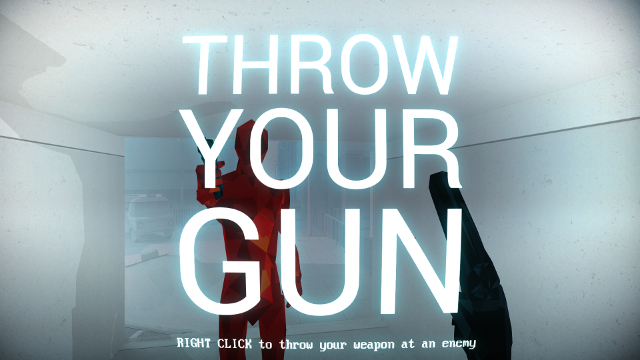 I mean, it’s not like SUPERHOT gets *subtle* about it. Don’t get me wrong here. 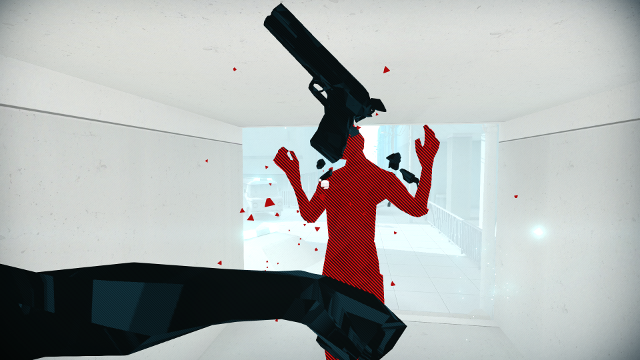 I throw my gun at the Red Person, causing them to drop their own gun in shock. I then sock them in the jaw before snatching their gun out of the air and shooting them with it. Because *that* is how SUPERHOT *rolls*.

It’s not until the fifth level, a drawn-out brawl in a subway station, that I remember the video playback functionality. As I expected, it turns out there’s more to it than simple playback. I can actually upload my level playthrough to some online server called ‘Killstagram’, ho ho ho. There’s even some rudimentary editing involved: using the numpad keys I can cut the video into sections, and slow down, speed up, and even add some weird special effects. 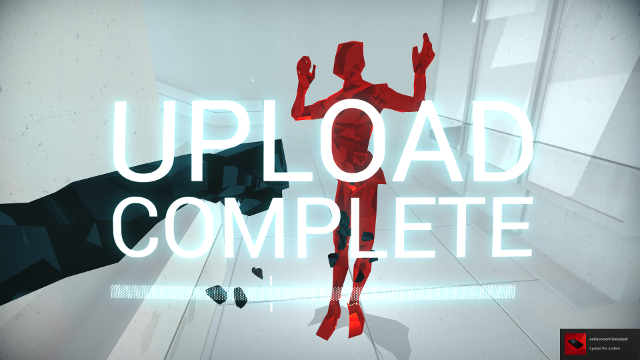 I don’t do any of that, mind. I just upload the video as-is. Here, let’s see if I manage to embed it here.

Then, er, the game glitches out. Is it glitching out? I’m still in the subway level, but it slows, draws out, stretches, loses colour. And then it disappears. UNAUTHORIZED ACCESS, I see in big red letters, and then I find myself booted back to the main menu. 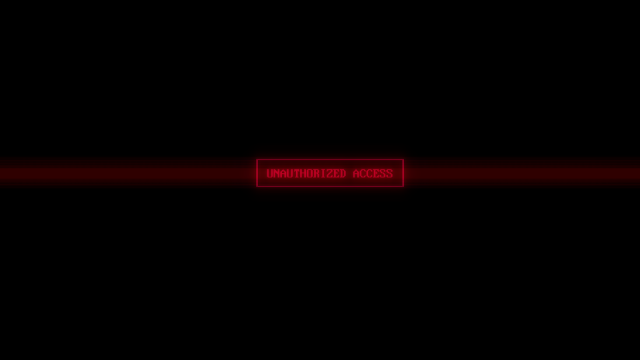 Did… did my upload go wrong?

“INCOMING MESSAGE”, I see on the title screen. In what’s essentially a cutscene, ‘me’ and the friendly person who provided me with the crack talk about SUPERHOT. It looks like we’re not totally sure about it, but we think it’s definitely interesting. A lack of player guidance is bemoaned, but the fact that everything’s new and weird and confusing is seen as a point in the game’s favour. 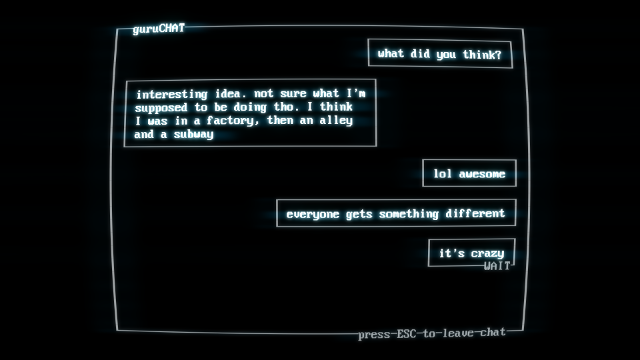 So, basically, I could have shown you this instead of writing the last eight-or-so paragraphs.

At the end of the conversation, my friend sends me a ‘new crack’. Which should allow me to get back into the game proper. So… this really was just a roundabout way to get me to watch a cutscene? Except it wasn’t even a very interesting cutscene: it was just two ‘people’ gushing about SUPERHOT, the game I’d much rather be playing right now instead of reading all this, and finding it ‘pretty awesome’. Of course you guys think this game is awesome! It’s literally your entire universe!

Much is forgiven when the next mission boots up, and I find myself jumping over a car in Matrix slow-motion. Still, I wonder. Is the rest of the story just going to be this? I’ve heard some bad rumblings about the quality of SUPERHOT‘s narrative. Is it going to keep dragging my out of my game flow to have its bodiless, essence-less characters spout game praise at each other? 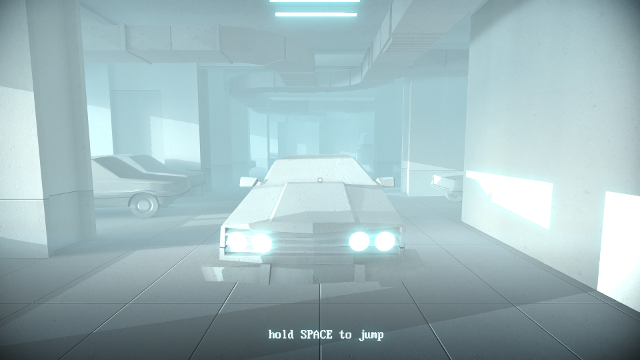 I ponder this as I leap the car a third time.

It’s not going to be that vapid and silly all the time, is it?