Sometimes I’ll dig into a given game for review purposes, and then discover that it and my review style don’t really click. Maybe the gameplay isn’t compatible with my interests, or the style isn’t conducive to long-form review, or it’s highly spoiler-sensitive. Or it just doesn’t grab me for long enough that I get enough out of it to write about. These things happen; not all games are for all players and all writers, no big deal. And if I catch the mismatch early enough in the week, I can usually switch over to something else no problem.

But say that I don’t catch the mismatch early enough. Maybe I don’t spend a whole lot of time gaming that week to begin with, and a lot of my allotted gaming time is spent battling aliens on Earth and battling aliens on Super Earth. And I only discover that I don’t really know — that I really don’t know — how to fill a whole Indie Wonderland with the game I blindly selected that week. What happens then?

Recursion Deluxe, by developers Ursa Games and 2D Heroes, is such a game. Let’s see what I have to say about, shall we?

Recursion Deluxe is a simple, pixel-art-style platforming game where you run a cute little character towards an exit flag, avoiding enemies and collecting optional stars if you want. Fail, and your character explodes in an adorable shower of pixels. Succeed, and your time-score is noted. And you get a decorative performance star if you collected all the stars in the level! And then you go to the next level. 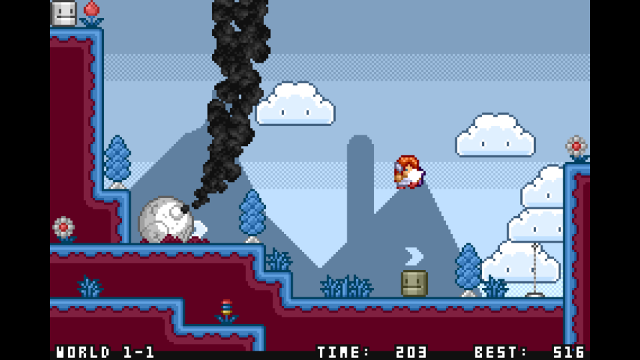 The starting levels are pretty simple, but fairly early on Recursion Deluxe introduces the idea the screen wraps around itself. Left is right, and up is down, and in this game the twain do meet, so they’ve got that going for them. As long as there are no obvious barriers in the way, the game screen is essentially one continuous palette that you can move around in. 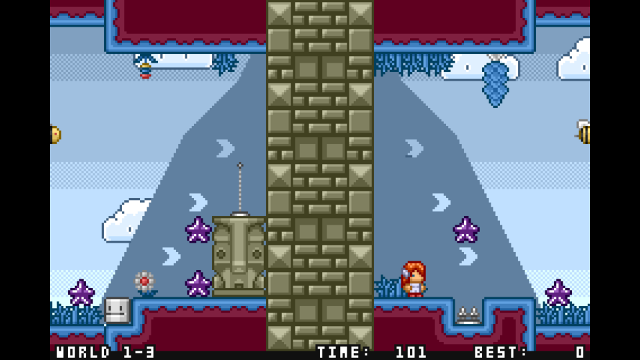 Example of an ‘obvious barrier’: the floor.

Later levels slowly introduce your standard fare of platforming accessories. Spikes, bees, and zombies, that kill you with a touch. Blocks that rhythmically appear and disappear. Balloons and bubbles that you can jump on once. Crumbling platforms. Bouncy springs. Big buttons that enact level state changed. Colour-coded keys and colour-coded orbs to switch and toggle colour-coded blocks. 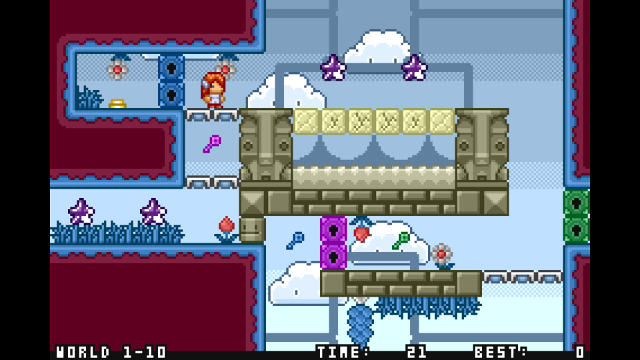 More or less all presented here, as an example.

There’s even a gravity shifting mechanic! 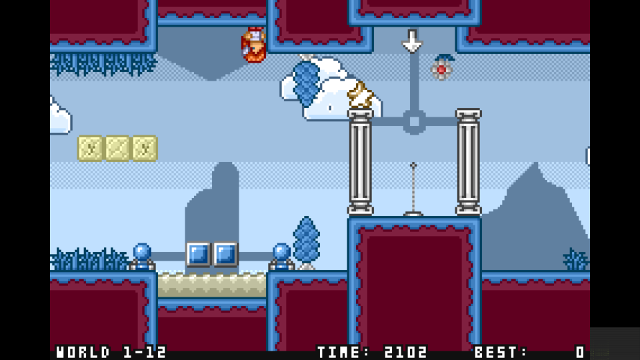 And it says a lot about the state of modern gaming that I can just say ‘a gravity shifting mechanic’, and you all understand what I mean.

Levels are usually short and to the point, with every so often a multi-sectioned one thrown in for good measure. That doesn’t necessarily mean they’re easy: there’s a lot of stuff that kills you in this game, from common offenders like water and spikes and angry bees to more esoteric material like reappearing blocks pushing you out of space-time. And some levels have a distinct ‘gotta get it in one’ flair, where if you mistime a crucial jump you’re now out of the balloons you need to survive. Not that that’s a big drama, though: you live, you die, you live again, all at the touch of… well, running into one of the omnipresent spikes should do it. 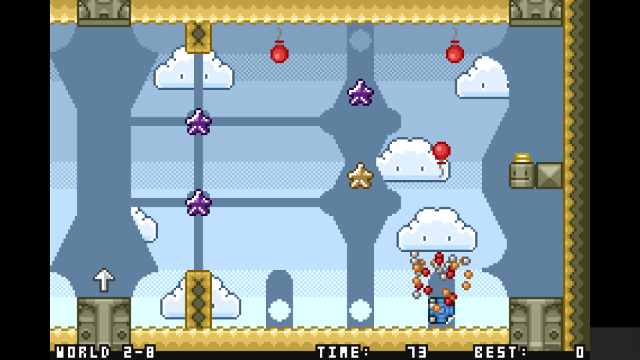 There are many levels. How many levels? I don’t know how many levels. They’re presented in thematic ‘worlds’, although I don’t know if that has any mechanical bearing. I don’t think it has. Each world has fifteen levels that unlock in sequence, and for every level you’re graded on your completion time and whether or not you got all the bonus stars. 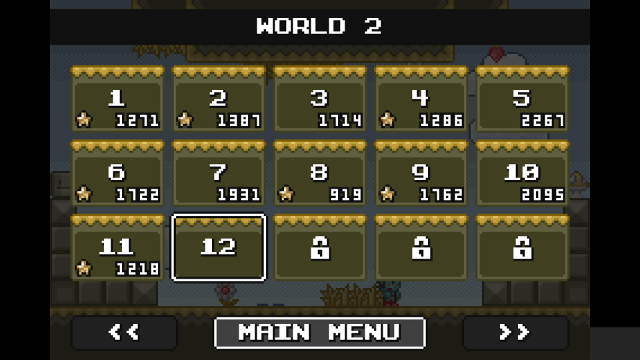 No, really, that’s it. That’s Recursion Deluxe. It’s a lovingly-crafted pixel platformer with a repetitive chip ditty that does nothing to stray outside common platformer vernacular. It’s competent, but unengaging. It feels like a game design student’s Master’s thesis project; I’d probably give it a decent passing grade, then file it away and never play it again.

That’s actually sort of what happened now, to be honest! Recursion Deluxe never really grabbed me during play. Three worlds and forty levels in, I felt I didn’t have the sense of this game ever going anywhere unexpected or interesting. Maybe it does! Maybe world 4 throws all established platforming conventions out the window. Maybe I’m wrong and a sham as a hobby reviewer; it could happen. But the more likely scenario here is that Recursion Deluxe is just… a game. A game, one on the giant piles of Games That Exist. Fun for ten minutes, would probably entertain small children, and I dig that you can select a man or a woman character at the start and it doesn’t matter either which way. But not something I’d clear my schedule for.

Recursion Deluxe runs you five Steam dollars. I got it for three in a sale. Neither of which sound like particularly good prices, but hey. Five dollars. I’ve also been given to understand this game has integrated Twitch streaming — the Twitch icon on the menu screen is a dead giveaway — so take that into account if that’s a purchasing factor for you, I guess.

And that’s all I have to say on the matter. Aliens are waiting. See you next time!

Jarenth really tried, okay. Follow him on Twitter or hang out with him on Steam if you want to coax some more detailed critique out of him. Or just for the hell of it. And if you dig Indie Wonderland and Ninja Blues in general, why not consider supporting our Patreon campaign?