And you know what? I spent the last months of 2015 stuck in a rut. A self-imposed rut, sure enough: nobody forced me to camp out in Visual Novel Valley for two months but me. But a rut all the same. So maybe it’s time now to broaden my horizons. To look beyond the stale and the comfortable. Maybe it’s time to… explore. With renown.

Or, putting the former in a non-zany way: this week’s game of choice is Renowned Explorers: International Society. Renowned Explorers for short. Renowned Explorers is the latest release of Abbey Games, the Dutch study previously responsible for Reus. I had some decent fun with that game on the Website That Was: it was pretty, and funny, and interesting, and only slightly longer than my overall attention span. And a quick look tells me that Renowned Explorers at least inherited its big sibling’s distinct art style, so that’s a plus right out the gate.

Let’s see if it manages to stand on its own.

(Also additional disclaimed I guess: I’m kind of acquainted with one of Abbey Games’ lead developers. So if I end up being positive about Renowned Explorers, feel free to horrible distrust my ulterior motives.)

Renowned Explorers has Reus‘ colourful sense of aesthetic direction, that much is immediately clear. I mean, just look at this title screen: 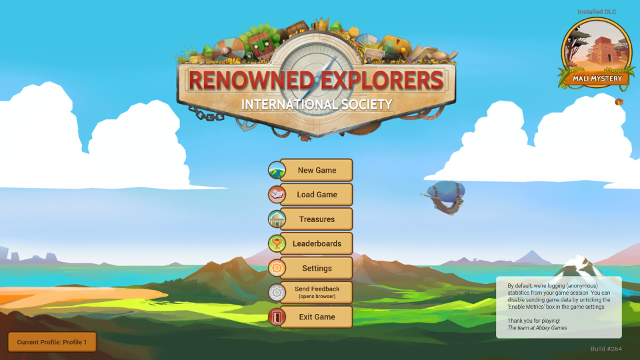 Bob Ross *himself* would applaud those happy little trees.

I wonder if it also shares Reus‘ love for collectible doodads, and fancy unlockables achieved through repeated play? 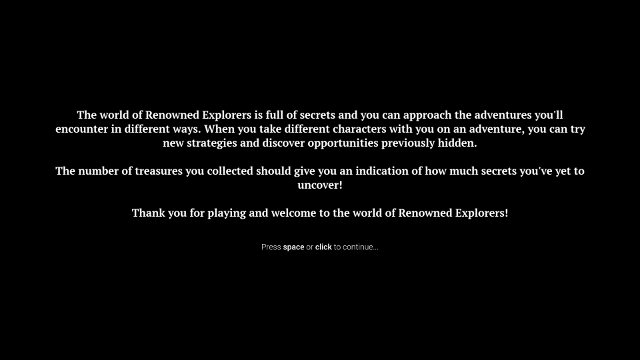 This is one expansive title screen, though. Let’s see, what have we got?… New Game, Load Game, Exit, that’s expected fare. Options, of the Game, Video, and Audio persuasions. 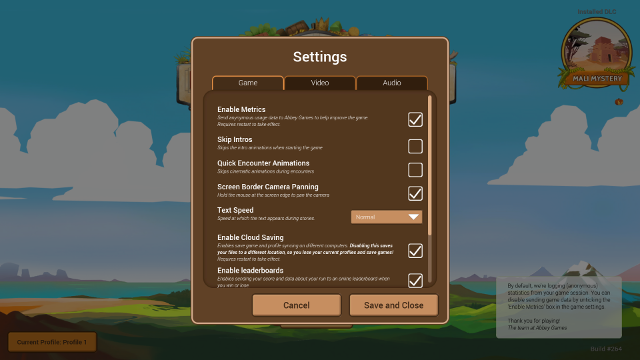 The mention of ‘text speed’ briefly makes me shudder. Not again. Not *again*.

Treasures leads to a fancy room with a lot of fancy silhouettes. That I haven’t unlocked yet. Send Feedback does what it says on the tin: it opens a browser window for feedback. Well ho ho ho, I have my own feedback channel right here. And Leaderboards opens– hey, would you look at that. One of my friends plays this game too! 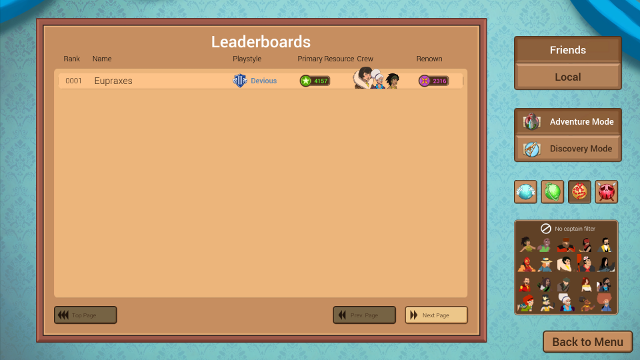 I should call that guy Smitty from here on out, because he’s *number one*.

Anyway. After a brief ‘exploration’ of the title screen — yes, I did think that was witty, thankyouverymuch — I’m left with the conclusion that I don’t really know what any of this means. More practical experience is needed. And you know what that means!

The first thing New Game does is give me a choice of difficulties. A double choice of difficulties, actually. I can play in either ‘Discovery Mode’, which is a more casual exploration experience, or ‘Adventure Mode’, which skews the experience more towards the ironman-roguelike. And within either mode, challenge levels range from easy to Red Skull With Crossed Spears.

I quickly get the sense, however, that Renowned Explorers is sort-of expecting me to play Classic Adventure mode. Or not expecting, so much as daring. Adventure Mode has its own set of achievements… which you can only get if you play the Classic or Red Skull Hard modes. 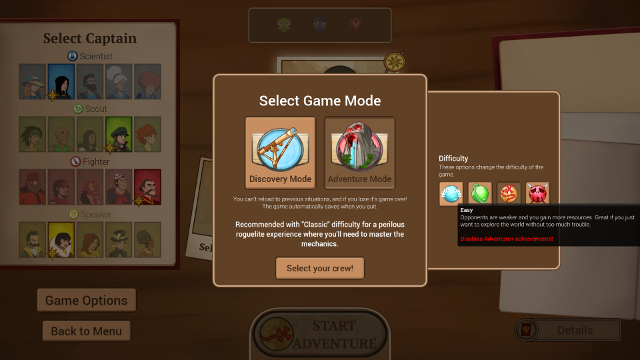 I can be forgiven for thinking, in this setup, that ‘Classic Adventure’ is the ‘intended’ experience. Why else guide me this way so strongly?

Difficulty level set, I must now pick my three adventurers. From a crew of twenty. They all have names, and long backgrounds, and a pleasingly diverse set of character portraits. I briefly wonder if these unknown-sounding names all belong to actual historical world travelers. But then I hit the Dutch sailor ‘Jan-Piet Corneel’, and I figure, they’re probably not. 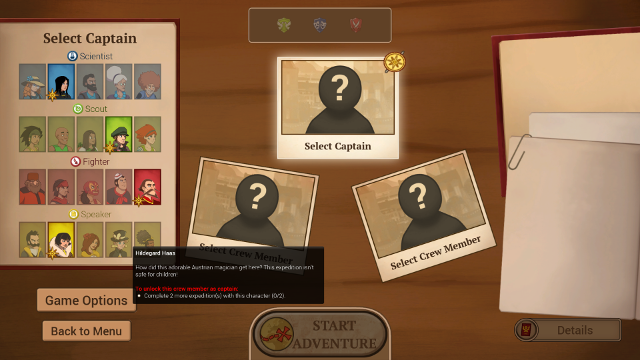 And that’s before I find the Austrian magician girl.

I can only select four of the available adventurers for the Captain slot on my crew, though. The twenty choices are split in four categories, and only one character per category is captain material. So do I roll with the Speaker, the Soldier, the Scout, or the Scientist? 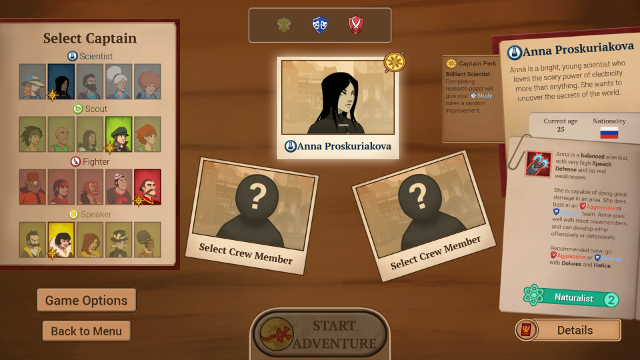 If this choice in any way surprises you, then hello! You must be new to Ninja Blues. I’m Jarenth, and I’m a scientist myself.

I do get full pick of the set for the other two crew members, though. And boy, does that involve choices. Each crew member has a positive mess of details to pore over. There are perks, and skills, and training, and stats, and equipment… 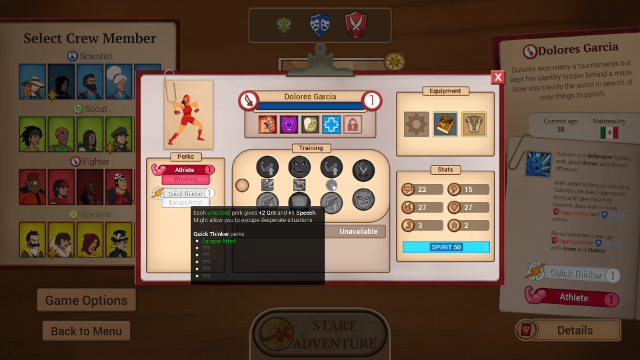 Luckily, Renowned Explorers is kind enough to take away some of the guesswork. Captain Anna’s blurb suggests that she best teams up with Dolores and Hatice — and both of their blurbs agree! So without further ado, let team Screw Everyone Who Opposes Us EXPLORE THE HEAVENS THEMSELVES! 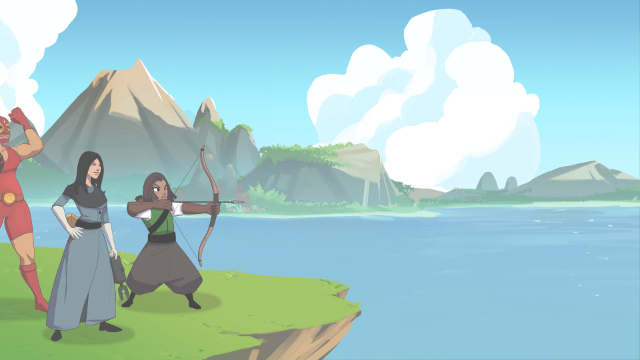 Just as soon as I figure out how. 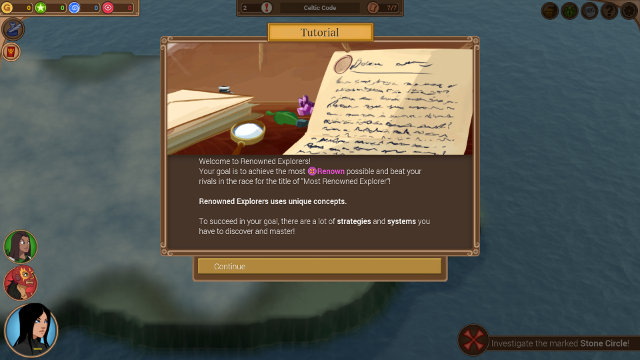 In fact, you know what I like even more? Expansive tutorials! Again, not kidding. 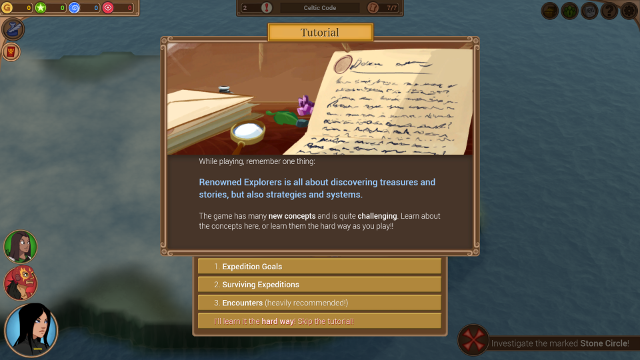 Strap in, reads and readers, because it is learning time.

My goal, as an official Renowned Explorer, is to gain Renown. By Exploring. Which makes the title seem a bit premature, to be honest? I particularly want to beat the current Most Renowned Explorer, Matthieu Rivaleux, and — wow, what a good name. I’ve never met the guy, but I hate him already. I can just picture his perfect snooty French face.

I can gain Renown by finding treasures, and by grabbing Gold, Status, and Research. And then there’s also Insight, which is… well, it’s not something that helps me deal with this information deluge. 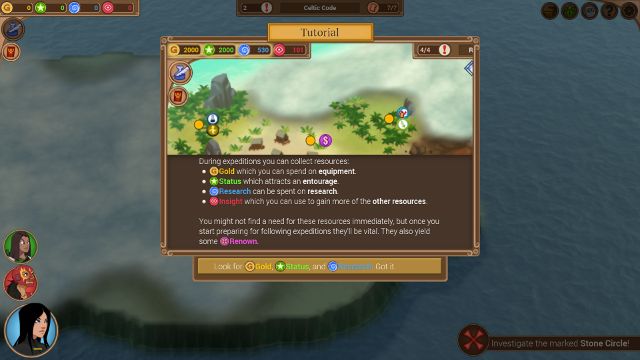 There’s a little bit of everything going on at once here.

‘But you can’t get resources directly! Rather, you can get tokens, which are exchanged for resources, and…’ 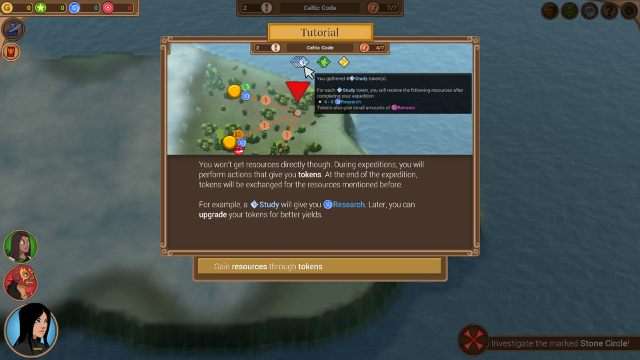 Apparently my goal is to explore a world map made of nodes. Nodes lead to encounters, which lead to tokens, which lead to resources. But it’s not all fun and games! Encounters involve danger and combat. And between vital supplies, and a resource called Resolve, my expedition is in danger of falling apart at any time. 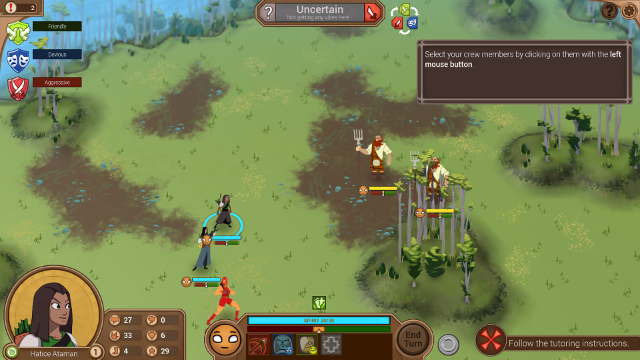 Encounters, it turns out, are turn-based battles on a hex grid. Each alternate turn, my characters can walk a certain distance, then use an ability. For instance, attacking! That’s an ability. 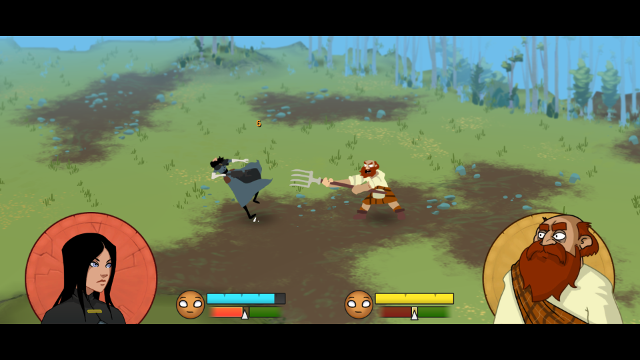 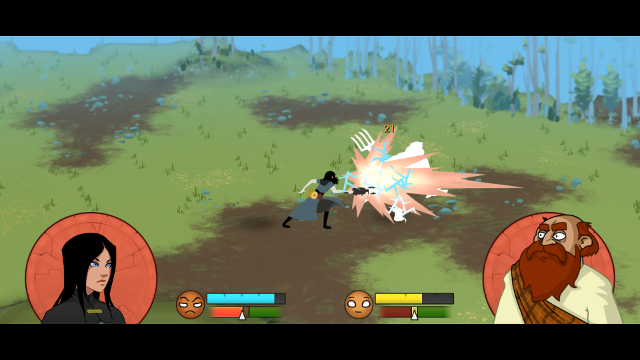 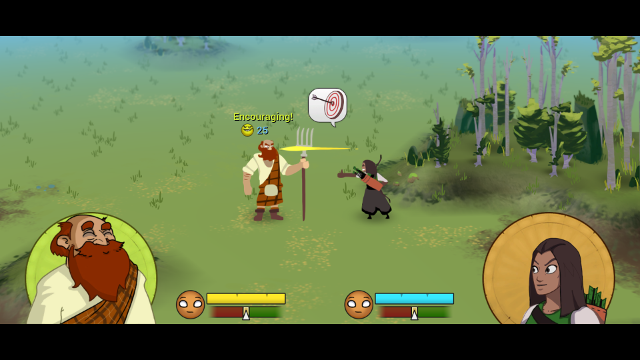 These ‘speech attacks’ still deal ‘damage’. But instead of hurting your enemies, you try to get them too sad too fight. Or so excited about your cause that they stop resisting. One way or another, they’re out of the fight: fuming so hard they can’t focus anymore, so impressed by your splendor that they can’t imagine putting up a fight, or just straight up dead. 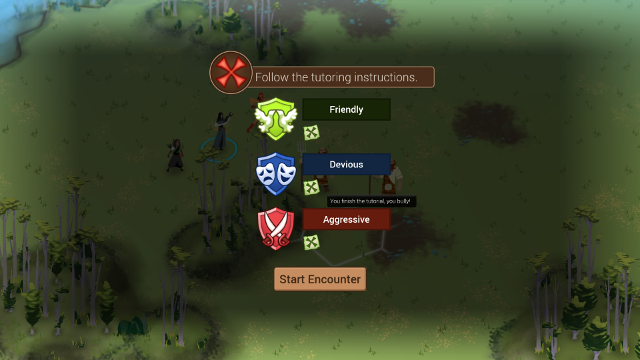 Those emotional descriptions aren’t just fancy attack names: characters can actually start feeling a particular emotion after being attacked. If their overall mood is conducive. So an Enraged character loses armor, while an Impressed character loses speech defense. But a Confident character actually gains attack power! Oh, and have I mentioned that positive-slanted abilities also heal your allies?

And that’s not even mentioning the ‘overall mood’. Each side exudes one of the three main attitudes at any time: Friendly, Devious, or Aggressive. And these attitudes seem to work in a simple Rock-Paper-Scissors system: when they’re Friendly and you’re Aggressive, your assertiveness gives you an advantage. But if they’re Friendly and you’re Devious, their simple kindness disarms your mean snark. Luckily, moods can be changed through ability use… assuming they don’t do this first. 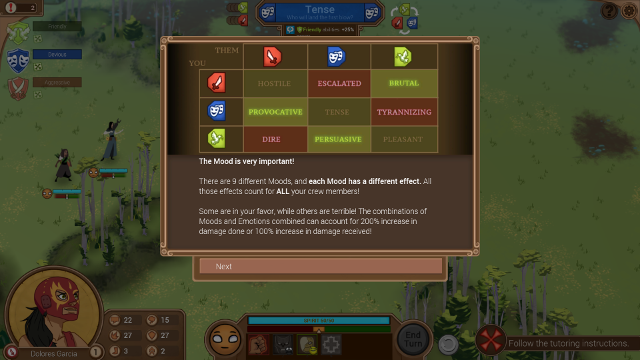 It’s like Pokémon, except your happiness is on the line.

It sounds tricky at first… and that’s because it is. Crikey, so many systems. That splash wasn’t lying! But I think I have the basics down for the moment: explore the map, find tokens and resources, and defeat encounters through rural kindness, scientific terror, and ringside elbow drops. Exploration Team, away!

Our location: a Celtic island. Our goal: finding the mystic Stone Circle. Our optimism: optimistic-like. 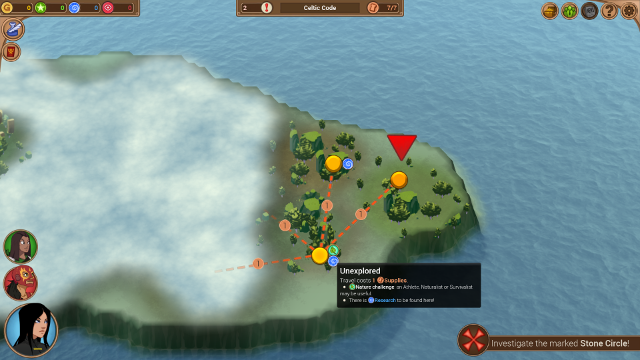 Our thesaurus: LOST IN THE AIRSHIP FLIGHT.

From my starting position, I can reach either of two nodes. Both cost one of my seven supplies. The upper node promises potential Research to be found! And the lower node… promises that as well, but also a ‘Nature Challenge’. An Athlete, Naturalist, or Survivalist might be useful here: luckily Anna is a Naturalist!

Arriving at our location, we find… a colourful stone! It looks to be worthless. But clever Anna jots down some notations on the stone anyway, because that’s what scientists do. I am awarded One Study Token.

From here, I find a path to a central island node. More Research, and possible treasure or items… but there might also be an Encounter there! Which, hey: I’m all in favour of. Let’s rock! 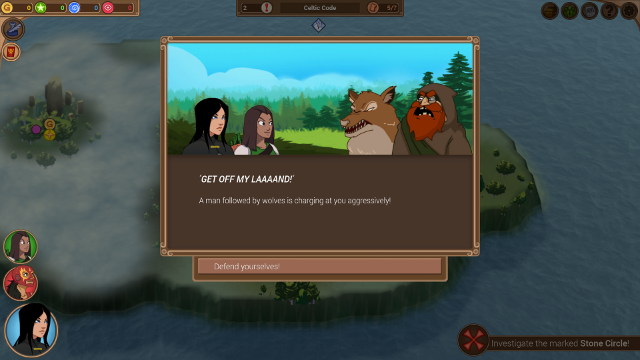 Okay! My first real battle! Before it starts, Renowned Explorers warns me: not every conflict resolution is equal to the other. If I kill the druid, for instance, I’ll get a bad outcome. But if I befriend the druid instead, I get a good outcome… plus two Study tokens and two Campaign tokens. 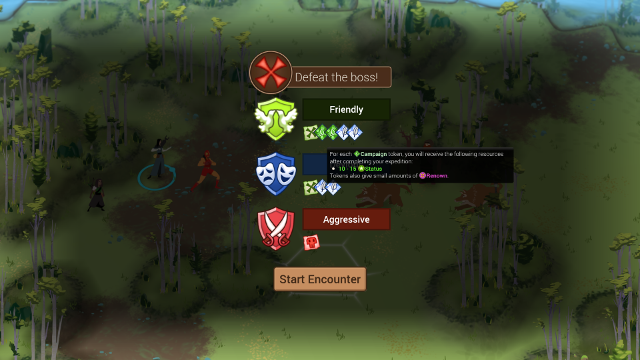 I don’t know what those do yet, but by *Steve* I want them!

So I’m gonna try to be kind to the angry guy and his angry wolves! With any luck, they’ll be kind in return? 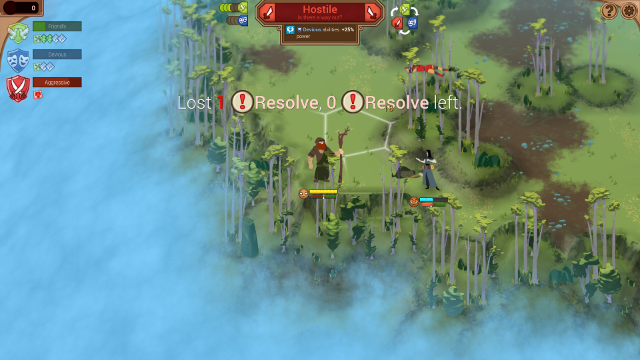 And neither are angry berserker druids.

Did I just lose on the first-ever real encounter? 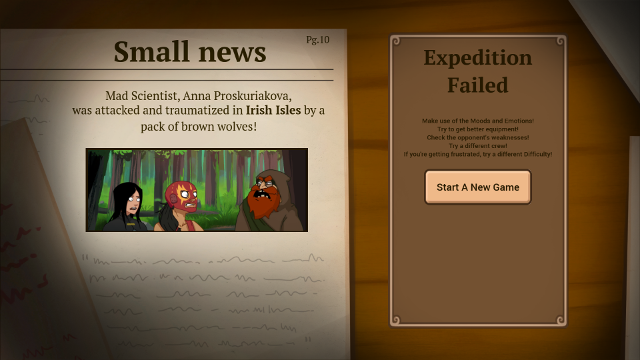 Yes. That is, in fact, *actually* what happened.

How about we try that again? 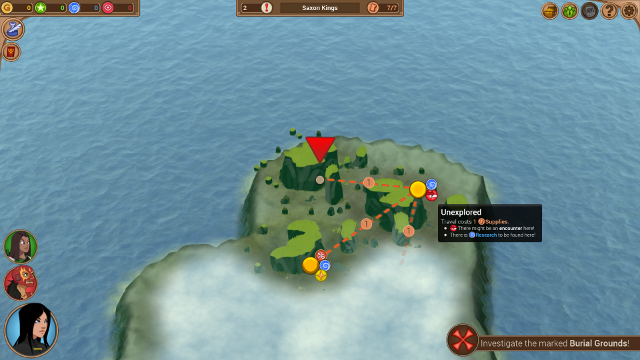 That first island was just a warm-up.

The Island of the Saxon Kings goes a lot more swimmingly. Anna learns about ancient steam engines, the party steals money from an abandoned casino, and we even find a legit Treasure — a clear piece of amber with a bug inside. 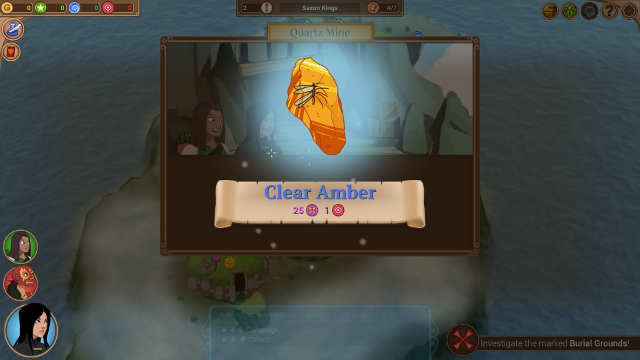 Eventually, we reach the end of this expedition: the burial ground of the ancient Saxon kings. What wonders lay hidden here, I wonder? But before I can excavate anything…

Rivaleux! That perfectly groomed asshole got here just before I did! And he’s planning to steal the treasure for himself! 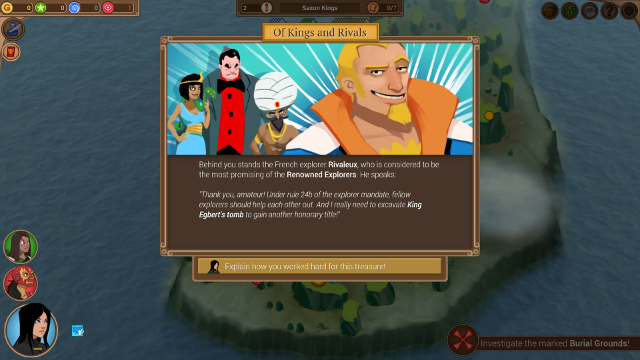 I was right! It IS the perfect name for a guy you’re meant to hate immediately.

Rivaleux sends his henchman, Amir Akhtar, to explain why their party — four to my three, how is that fair — deserves the treasure more. And hey, wait! When he says ‘explain’, what he really means is… 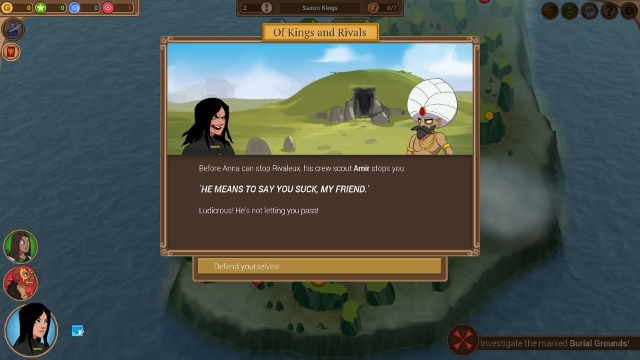 And then we’re in combat. It’s my party versus Amir and his henchmen. Who can attack, or bully, or befriend, the other first? If I manage to turn Amir, one way or another, maybe I’ll still be able to– 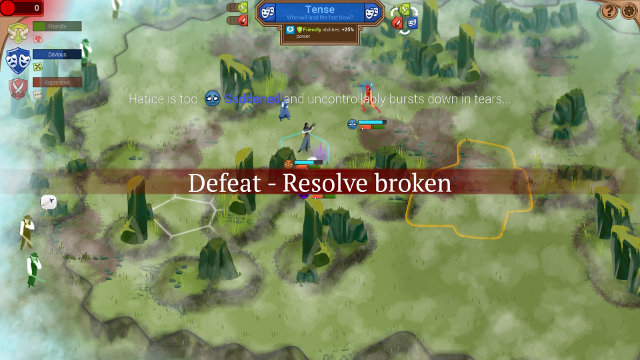 His mastery of contemporary insults was just *too great* for me to overcome.

Man, this game is hard. I was really hoping to get past the first board before hitting the review halfway mark. And yet, here we are!

Maybe I’ll be able to show you some more of Renowned Explorers on the next page. That is, if Rivaleux doesn’t mess up any more of my expeditions. There’s a really cool Viking ship that I don’t think he knows about yet…