Happy seasonal holiday period, one and all! We here at Ninja Blues would like to wish everyone a good last few days of 2015. May you celebrate whatever traditions you hold dear with the people you love and care about.

Now, normally, I use the Christmas period as a prime excuse for taking one or two weeks off. I was close to doing that again this year! But then I figured, no: this year, I’ll put some extra effort into writing a special Christmas-themed review. A gift, from me to you. As a thank-you to all our loyal readers over the past two years, and especially to our Patreon supporters, whose generosity has made possible so much of our 2015 adventures.

And as luck would have it, I know just the game. T’is the season for it, for one. And what’s more: it’s a game so kind, so heartwarming, and so uplifting, that it’d be a shame not to share it with all of you as soon as possible. And no, I’m not telling you what game it is yet; what would the Christmas period be without a gift to unwrap?

(Game source: Gift from a friend. This review is in the spirit of both giving and receiving; the perfect Christmas review, perhaps?) 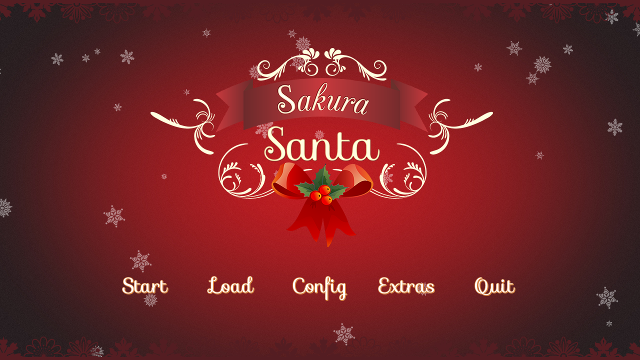 NONE OF US WILL EVER BE FREE

“Jarenth, is this your idea of a joke?” It most certainly is not, reader! Sakura Santa came out on Christmas, only a few days ago. Technically just too late to be a part of VNADS 2015, I know. But I’ll be damned if I let this game hang over my head for a whole new year. Not again. Not again.

So buckle up, everyone! We’re doing this.

And hey, perk up! It’s Christmas in Sakura-land as well! 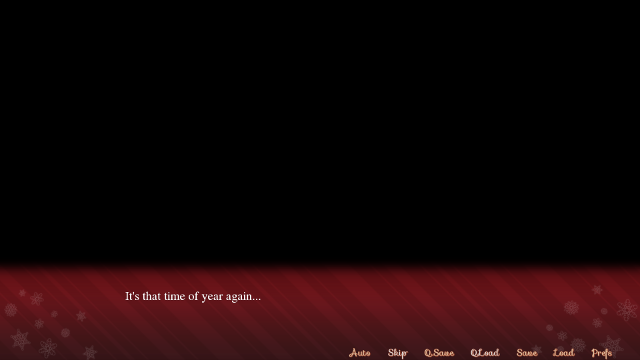 Doesn’t that just fill your heart with some *goddamn holiday cheer*?

A few screens of black backdrop establish that a) it’s nearly Christmas, but not quite, and b) the person talking right now doesn’t have a whole lot going on right now. Then that person remembers their manners, and actually introduces themselves. To… us, I guess. 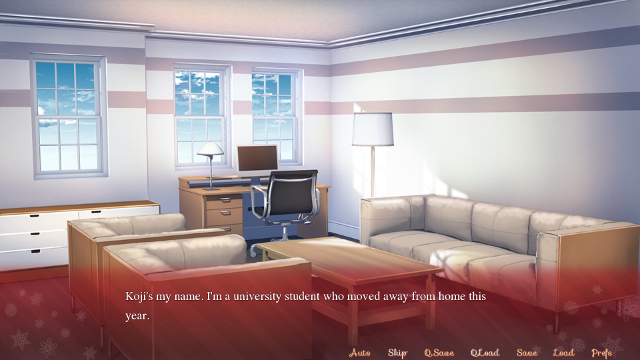 Hello, Koji. Nice to meet you! My name is Jarenth, and we’ll be stuck together for the foreseeable future.

So what’s Koji got going on? Koji’s a driven university student. He wanted to get the best possible education, and then… proceeded to do exactly that! Well, that’s refreshing. But every upside has a downside: Koji’s not very good at making friends, and his singular study focus hasn’t really helped in that regard. He moved to ‘this town’ ‘a while ago’, but he’s still feeling pretty lonely.

As a result, Koji’s Christmas spirit is lacking. This is CHRISTMAS DEFCON 2.

Koji, poor lonely Koji, just wants someone to spend Christmas with. Normally he’d be hanging out with his parents and brother, but…

Hold on now. If Koji is still on good terms with his family, why doesn’t he reach out to them for Christmas? 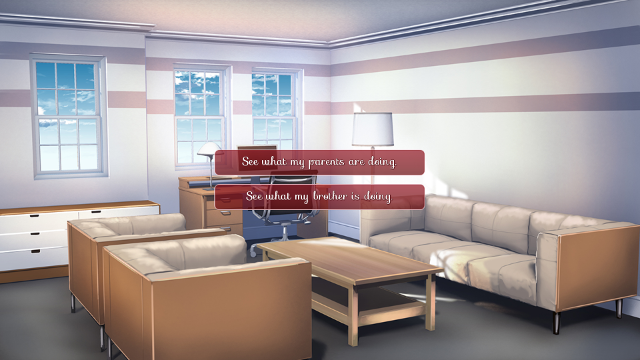 Oh. He… he actually does. That’s great. Carry on, then.

I have Koji call his brother. Immediately, Sakura Santa cuts to the post-phonecall wrap-up, and Koji summarizes the talk for me. Which… sure, okay.

Anyway, Koji can’t spend Christmas with his brother because said brother is visiting his girlfriend overseas. Good enough reason, I guess. Older bro also left home for studies, so apparently that runs in the family, and as a result the two haven’t seen each other in a while. Which is too bad, because they haven’t been able to play their traditional Arcadia Battlestation game of Dungeon Rumbler II together.

…Wait, wait, wait. I know those dumb made-up names. In fact, I’m pretty sure that this console and game were mentioned by name in my Sakura darling, Sakura Swim Club. Which implies that… is Koji’s brother actually… 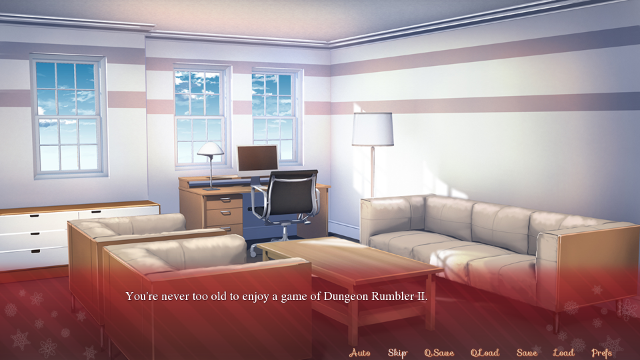 Any indie game developers reading this particular column: *you know what you have to do*.

Well. Anyway. Koji can’t spend Christmas with the family, that much has been set up. So we’re back to square one on the loneliness front. What can our poor leading man do to feel less alone? Koji is determined not to turn into a Lonely Christmas Grouch. So the only course of action is…

…go out! Exactly! Sitting and stewing in your grey apartment is just a highway to grumpiness. Let’s hit the amazing Christmas-themed shopping district that this unnamed town probably has! 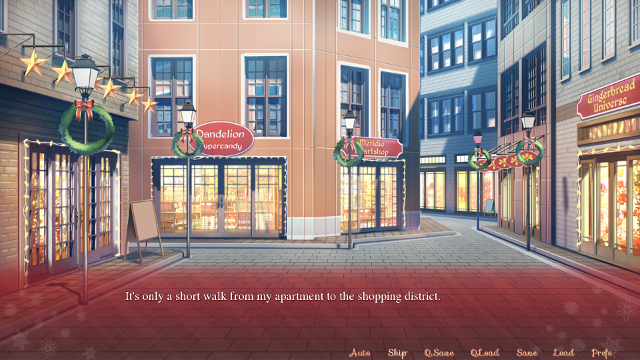 Koji mingles with the giant Christmas shopping crowds that this background completely fails to portray. Ah, Sakura games. Sadly, though, being in a giant crowd of essentially nameless, faceless, meaningless people isn’t doing much to improve Koji’s mood. So the apartment’s a bust, and the shopping district’s no good; what else can we try?

Suddenly, Koji spots a ‘worn pathway’, in-between shops, that leads ‘out of town and into the forest’. And as any good video game protagonist knows: if you see a strange path that leads away from civilization and into almost certain and needless danger, you take that path. Koji away!

Turns out the path leads to a shrine. 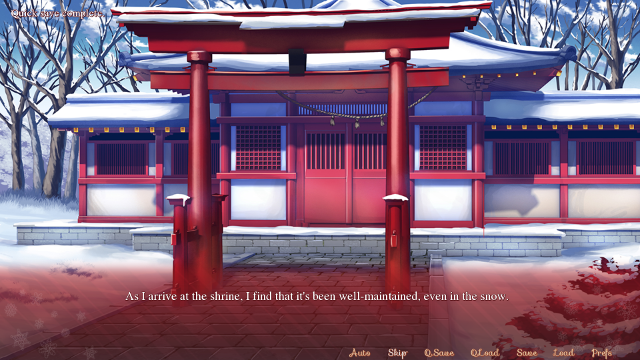 As they apparently do, in Sakura Japan.

Apparently it’s customary to present offerings to the shrine spirits and make wishes. Koji’s not a superstitious type, but he’s got a pocket full of change, and he figures ‘why not, right’. So money is donated, prayers are said, and then Koji makes the most saccharine, theme-appropriate wish he can come up with. 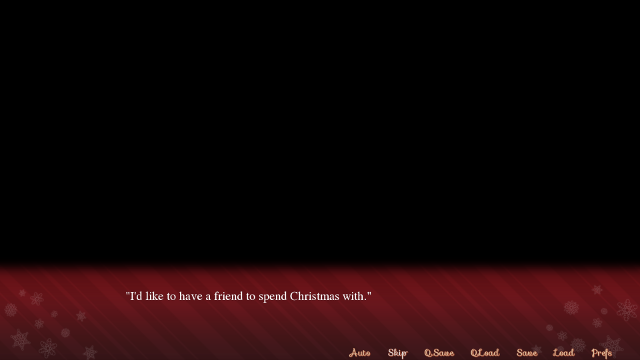 I can just *feel* this game move towards a PG rating.

And then! No sooner has Koji said his wish, than a shrine priest appears. An older man, so he doesn’t get the courtesy of a graphic, but hey. It turns out that this man is the shrine’s sole caretaker. The shrine isn’t very popular, so he doesn’t get much in the way of visitors, or help. And with a bad leg, in winter, it’s hard for him to keep up with daily maintenance. Still, he perseveres.

Ah. See, if this were a good Christmas tale, I’d peg this as the semi-ironic twist. Koji would help out the priest, and then hang out at the shrine, and they’d become friends, and then that’s his ‘wish’ fulfilled. But this is a Sakura game, so you probably won’t be surprised to hear that…

…that that actually happens? 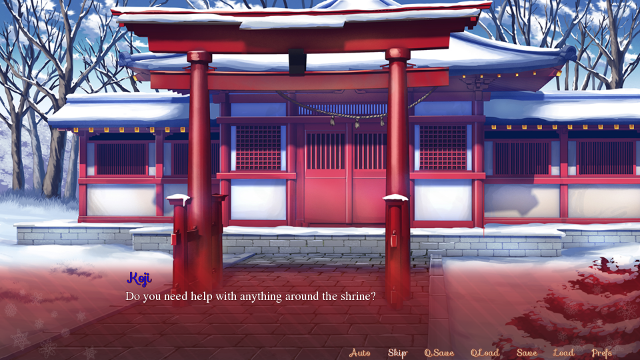 I mean, we’re still only at the ‘offer to help’ step. But still!

Koji shovels snow off the temple path — snow that isn’t actually visible in the background image, but just roll with this, okay — and sort-of befriends the priest. It’s actually kind of nice; he’s doing it explicitly to help out someone else. That’s too rare, sometimes. And he even offers to come back every so often to help again! You gain one Christmas Spirit point, Sakura Santa.

Koji leaves the shrine with some more warmth in his heart, but otherwise not much better on the Christmas Loneliness front. Suddenly, there is a rustling in the bushes. ‘An animal, or something?’ Koji checks out the bushes, because that is what you do when you think there might be wild animals hiding in them. And what he finds is… 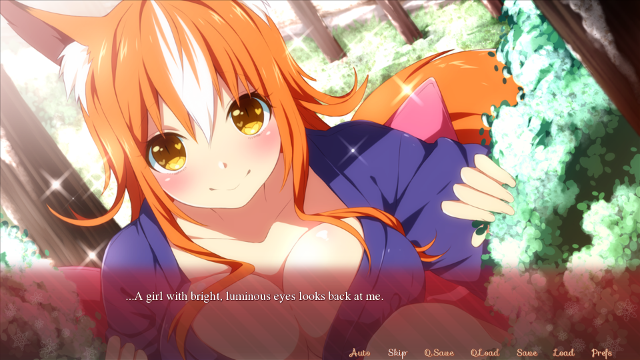 …a fox girl. A fox girl with heart eyes and a *massive* rack.

You know? For a moment there, I almost forgot I was playing a Sakura game.

Koji meets a fox girl. His immediate reaction is to think she looks like an impressive cosplayer, which immediately tells me she probably isn’t. And I’m right: the fox girl, Akina, introduces herself as ‘the shrine’s spirit’. And because Koji was so genuinely nice, she explains, she’s going to grant his wish. Koji wanted a friend to spend Christmas with? Why not a nice fox girl shrine spirit? With a massive rack? 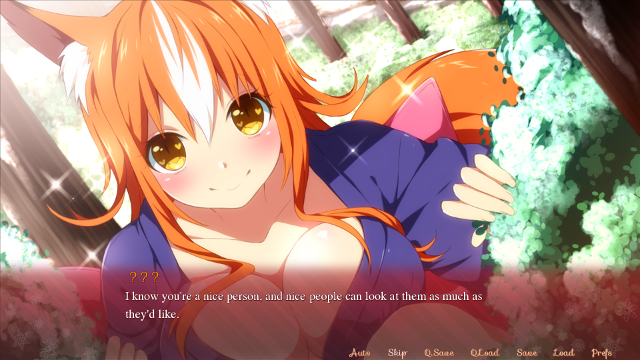 Koji can’t help but gaze at the aforementioned cleavage. Understandable, really. It turns out that Akina doesn’t actually *mind*. 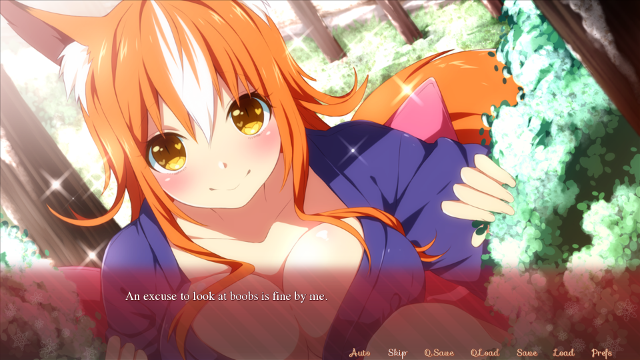 Koji befriends Akina, the impressive cosplayer and/or actual shrine spirit. And then she asks him out on a date. Because Sakura Santa apparently doesn’t beat around the bush the way some other games do. 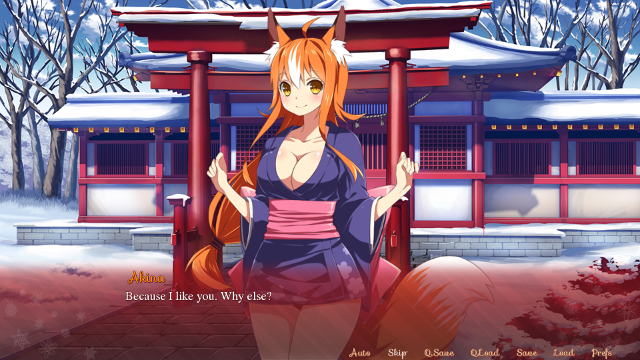 Akina’s answer to ‘Why did you ask me out on a date within three minutes of getting to know me?’

Alright, it’s… it’s a date, I guess. Now if you’ll excuse me, I have to pilot Koji home, before he collapses from Terminal Worldview Alteration. And/or Boobs Overload.

For Koji’s sake, though, I really hope it’s not the latter. Because while walking back through the Christmas shopping district, who should he encounter but what’s essentially a Playboy bunny model? 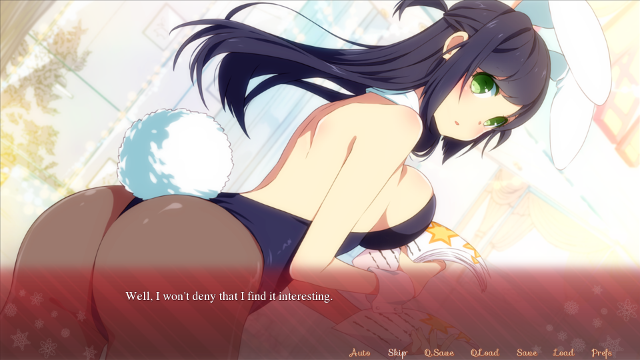 Who turns out to be his long-list middle school best friend, Izumi? 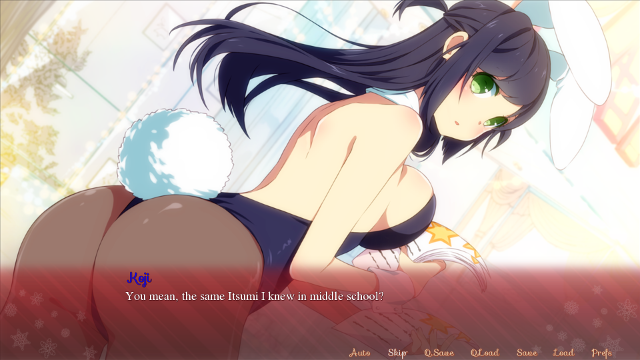 And before I know it, Koji’s volunteered to help Izumi out at the busy dinner cafe she works at. Any excuse to spend some more time with an old friend, I guess.

The chance encounter with Izumi and her bunny suit have left Koji a bit dazed, however. He walks through the shopping district streets, not paying a great deal of attention to where he’s going. And, sure enough, he bumps into someone. And, sure enough, they fall over.

And, sure enough, Sakura Santa remembers its Sakura heritage. 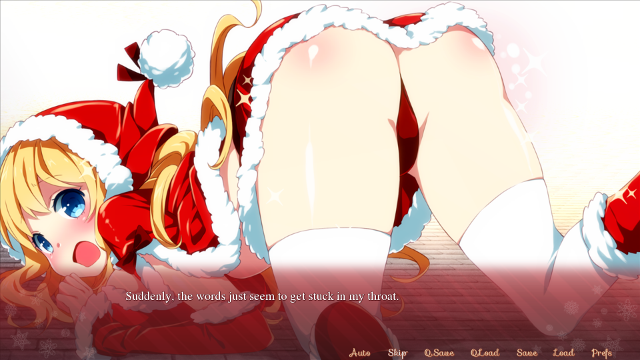 I guess we were overdue a classic Fallen Over Woman Panty Shot at this point.

After helping her up — and taking some time to stare shamelessly — Koji introduces himself to the santa-outfit-wearing girl. She’s in distress, it turns out: she lost her ‘wand’. And without her ‘wand’, she can’t go back to her ‘workshop’. And if that happens, ‘Christmas is ruined’.

Koji assumes this girl is just another dedicated cosplayer. But you can see the shape of this, right? I don’t have to spell out what’s actually going on here, do I? 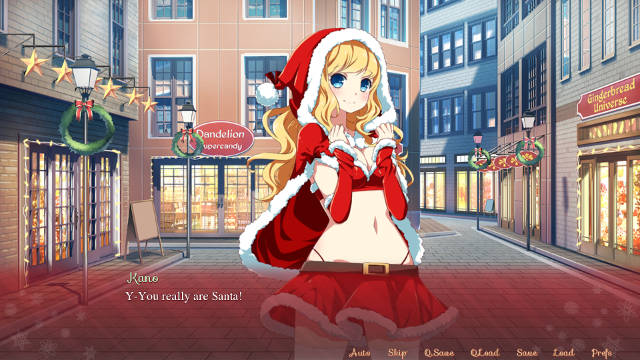 You knew this was coming and *so did I*.

And so a busy first day ends. And what a day it’s been. Just this morning, Koji was still wondering if he’d even be able to find anyone to spend Christmas with. But now, come evening, that question’s been replaced with a much more pertinent one: 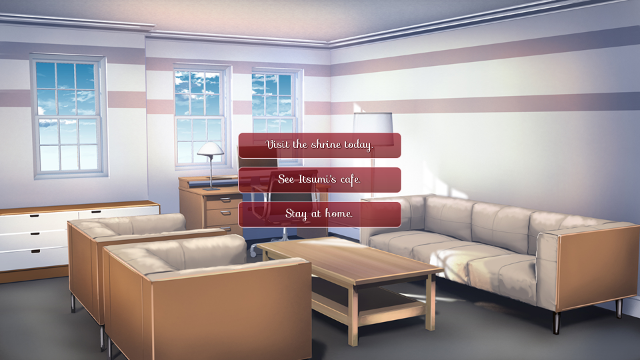 ‘Which route do I complete *first*?’