And so reach we the end of Sakura Month. Sakura Indeterminate Stretch Of Time, if we’re sticklers for accuracy. And what a ride it’s been! We’ve watched angels battle ancient sorcerers, high school swimmers work out their emotional baggage, voyeuristic battle maidens go on a quest for a fallen star, and childhood beachfront friends be awful at each other. And I don’t know about you readers, but I can definitely say I’m no longer the man I was when I started this.

There’s only one Sakura-brand left in Steam’s store. One final hurrah. It’s the largest breaker of the mold, too; the reason I saved this particular game for last is because it’s not a visual novel at all. But rather… a clicker. A Sakura Clicker.

Ha! You actually thought I was gonna do it, didn’t you? Readers, I love your attention and I love your faith in me, but there is no way I could write a full four-to-five-thousand word review on Sakura Clicker. It just cannot be done. In fact, I’m pretty sure I can fit everything I have to say about Sakura Clicker inside four or five paragraphs: 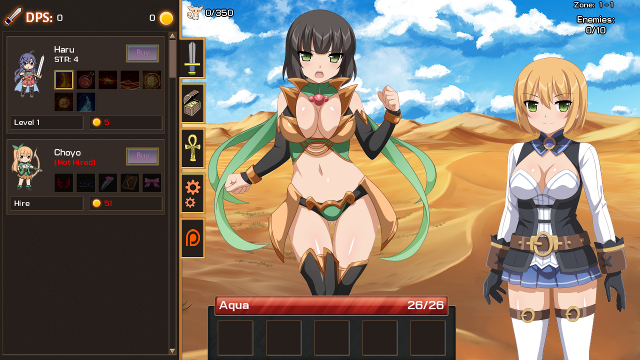 It’s so much a derivative game, the executable isn’t even called ‘Sakura Something’ — it’s called ‘Tap Dungeon’.

On the right side of the screen, ‘monsters’ appear. Click these monsters repeatedly defeats them, rewarding you with gold. You can use that gold to upgrade the ‘click power’ and skills of your ‘main character’, or to hire and upgrade auto-attacking secondary characters. Enemies come in waves; every wave is noticeably stronger and richer than the last. Every tenth enemy is a stronger Boss type, with a time limit, which blocks access to the next wave. And every fifth boss brings you to a new ‘stage’, which changes the background and the enemy types. This goes on and on for a while, until your hero finally reaches level 450. At this point, you can ‘reset’ the game: this puts you back at square one, but with a handful of permanent upgrade points that make the next iteration easier. 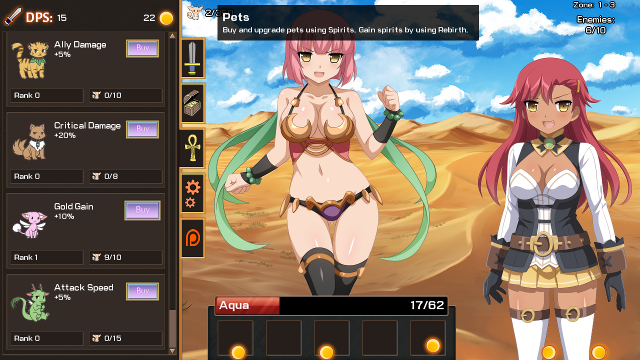 Upgrade points and permanent buffs are called ‘spirits’ and ‘pets’ respectively, in keeping with the rich Sakura lore.

So far, so Clicker Heroes. Sakura Clicker tries to earn the Sakura part of its name in — where else? — the character designs. All ‘monsters’ are cute half-naked women, usually wearing about one thirds of an appropriate costume for the monster type they represent. There are ‘boars’, and ‘bears’, and ‘witches’, and ‘plants’, and ‘dragons’, and so on and so on. And they all look more or less exactly like what you’d expect. And when you click-attack them, the sound they make is… I wouldn’t want to call it a ‘moan’, not as proudly as the game itself does, but Sakura Clicker definitely sports an impressive library of needlessly sexual reaction sounds and cries. 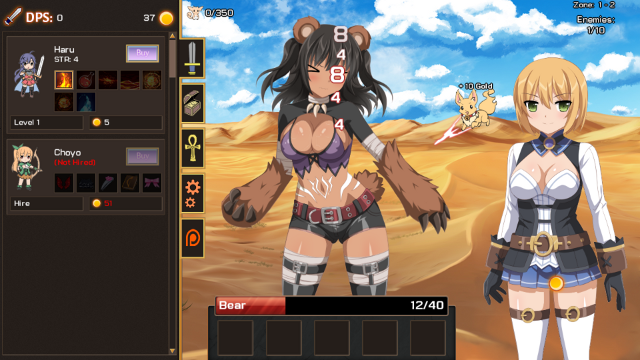 This is why you don’t get your monster costumes from the Halloween Discount Shack. 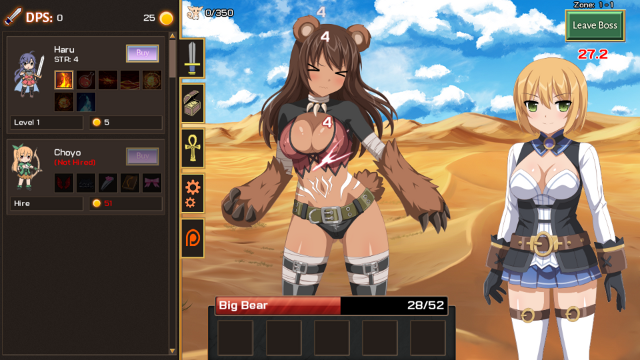 I have to say, though, I do kinda dig the range of the random character generator at work in this game. Hair types and colours, clothing sets, facial expressions… even skin colour is pretty well-represented.

Oh, and the background art from other Sakura games makes a reappearance as well. Whether or not this is intended as fan-pandering or just cost-saving asset re-use is left as an exercise for the reader. 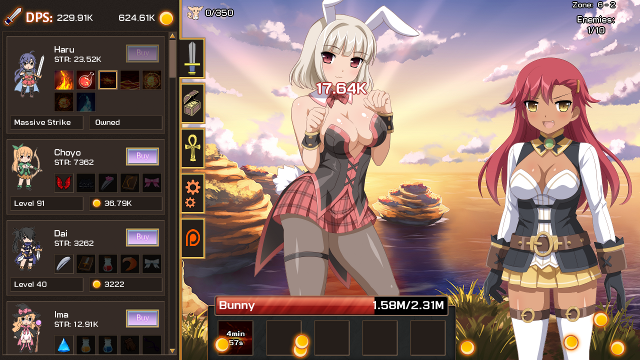 ‘Hey! Remember that pretty background from that game you hated?’

Finally, the game is just dripping with micro-transactions. Nothing game-balance wise, in as far as clicker games have game balance. They’re all cosmetic upgrades for your main character. You’re given a small range of customization options right at the start: one outfit with a few colours, some skin tones, and two or three hair styles in various shades. But if you want anything else, it’ll cost ya. Want some fancy hair styles? One dollar, please. Interested in putting some sword or bow sprites on your character? That’ll be one dollar. And obviously, obviously, there is a fine selection of super-revealing clothing to put on your in-game self. 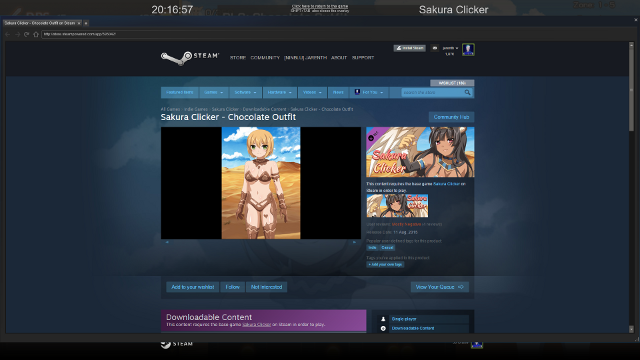 That’s it. That’s Sakura Clicker. I literally don’t have anything else to say about this game.

So! Instead, I figured that I should close out Sakura Month a little more formally. It’s been quite the adventure, after all. So how about a little ceremony? An awards ceremony. Wherein I present each Sakura game with a fitting prize for their efforts.

Without further ado, then:

Sakura Angels: Sequely Sequel Award
When I first started this Sakura Month idea, I had the mental image that all games would be some variation on the Sakura Spirit theme. And while later games would firmly disprove that idea, I have to commend Sakura Angels for being more or less exactly the game I’d imagined it would be. This also means I genuinely struggle to describe it in a way that isn’t ‘like Sakura Spirit, but more so’, so I guess that that’s the dark side of sequel-fame. Still, I wonder what my opinion of Sakura Angels would’ve been if I hadn’t played it first.

Sakura Swim Club: Gold In The Water Fountain Award
Four weeks after the fact, I still think Sakura Swim Club was really, really good. I might not ever stop thinking this. The only one of these awards that isn’t some shade of backhanded compliment, Sakura Swim Club deserves all commendation for showing me that even in the most unlikely of circumstances, great things can bloom.

Sakura Beach 1: Whiplash Award
And then right after Sakura Swim Club came the first Sakura Beach. The game that taught me that me that, even though it’s possible to find great things in unlikely places, I probably shouldn’t start expecting them. Spotting a cool watch in the neighbour’s trash can is no reason to book an express flight to the Great Pacific Garbage Patch. And yet, here we are.

Sakura Beach 2: OTP Award
I mean, if you are forced to continue on from a toxic, poorly-written, unconvincing narrative base like Sakura Beach 1, the best thing you can probably do is just write in a new perfect character who lampshades and solves all problems by virtue of existing. And then trust the players to make the right decision. Sakura Beach 2 understood this lesson well. Baby steps, Beach games, baby steps. Maybe Sakura Beach 3 will go as far as to not actively revolt me?

Sakura Clicker: Lazy Cash Grab Award
I’m putting as much effort into this award as I feel was put into creating Sakura Clicker. Which is to say,

Myself: Iron Endurance Award
Having sat through no less than six of these games, I nominate myself for the Incredible Mental Endurance In The Face Of Cruel And Unusual Strain Award. And as the sole member of this review’s awards committee, I feel I have no choice to accept that nomination! This, I feel, also illustrate that the division of power in this awards ceremony 100% works as intended.

You Guys, The Audience: Iron Empathy Award
And, of course, I couldn’t have done it without all of you readers.

I grump and grumble for comic effect, but the truth is that I had some fun this last month and a half. And it definitely helped that I wasn’t in this alone! Playing all these games ‘just for myself’ would’ve probably taxed my sanity to the breaking point. But knowing I was playing and mapping out these games so you guys didn’t have to… it filled me with determination.

And if you’re not a supporter, but you enjoyed this here quality content and would like to see more of it in the future? Please consider donating to the Ninja Blues Patreon campaign. Be a part of making good causes like this happen! And there’s also the undying gratitude angle to consider, of course.

And with that, I’m officially closing out this year’s adventures into Visual Novel And Dating Sim badness. It’s been real, everyone. See you next year!

Maybe I’ll actually have completed Fate/Stay Night at that point.

Follow Jarenth on Twitter or hang out with him on Steam. And if you dig Indie Wonderland and Ninja Blues in general, why not consider supporting our Patreon campaign?