“Is Sakura Beach 2 going to end with Seiji ditching his abusive pseudo-friends to be with a woman he actually likes?”

Why choose if you don’t *have* to?

Or, from another angle: yes. 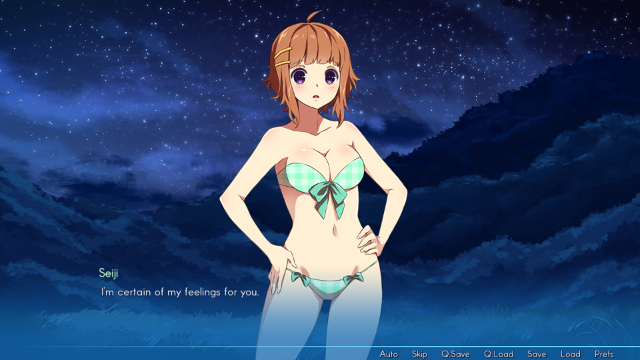 Because only one of the three is worth choosing, obviously.

Or, from the angle that actually explains to all of you what’s going on:

Sakura Beach 2‘s story follows an… interesting arc, let’s put it like that. The first half or so plays out almost exactly like I expected slash feared. Seiji is still in his dysfunctional ‘relationship’, with his childhood ‘friends’ Ayumi and Momoko. And this relationship is still a terrible affair in all aspects: mismatched, one-sided, and downright abusive.

Understand that I don’t use that last word lightly. If the three characters in this game were just a terrible match for each other, I’d have called it that. But at several points, Ayumi’s and Momoko’s behaviour really crosses the line. And the whole thing goes from poorly handled attempts at comedy to downright abuse.

I’ve already mentioned the controlling behaviour and the gaslighting on the previous page. ‘How dare you go somewhere without explicitly telling us, even though you did’, that sort of thing. That’s a big tell in and by itself. And Sakura Beach 1‘s sexual harassment and ‘comedic’ violence make several return visits, too. Remember how these girls can throw pillows with cannonball force? And how they’d do this at the slightest provocation? 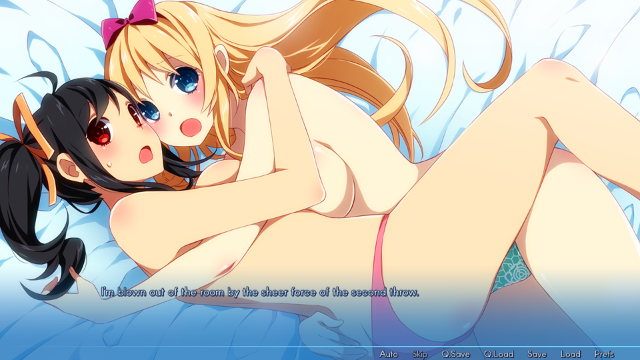 ‘But Seiji walked into their room again!’ Yes, after knocking several dozen times with no answer. And even *then*, a simple ‘Seiji, get the hell out’ would also work. 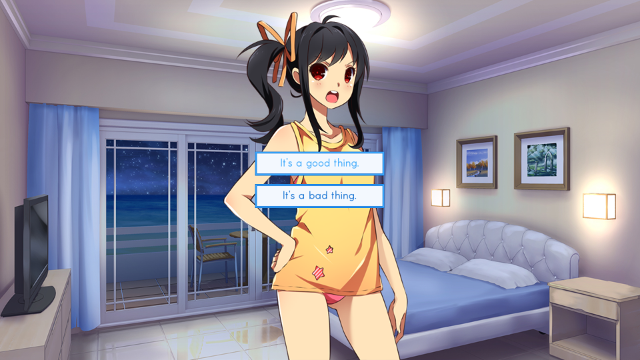 Seiji actually reflects on this later. ‘I’m getting better at dealing with blows to the head. Is that a good thing, or a bad thing?’ 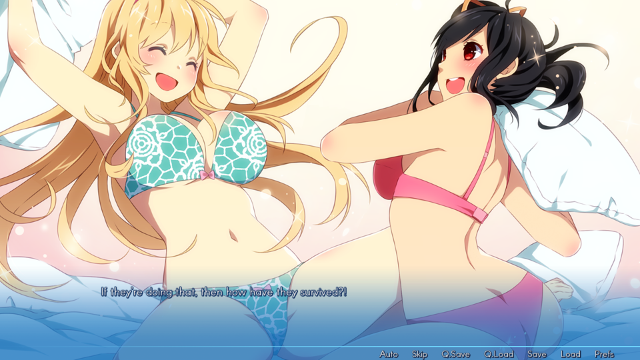 Also: I did appreciate the lampshading in this cheesecake pillow-fight scene. ‘Holy shit, they’re hitting each other with *pillows*? How are they still alive?’

There’s a lot of casual belittling, as you do. Ayumi in particular calls Seiji a pervert over and over again. And over. And yes, I know that ‘friends give each other shit for fun sometimes’. But Seiji actually explicitly asks her to stop. And hey, guess what? That doesn’t happen.

But for me, the real red flag was raised at the end of the second day. Seiji goes star-gazing with Nene again. He even explicitly asks permission from Momoko and Ayumi, because that’s what you do in a healthy friendship/budding relationship?

The scene itself is innocence itself. Seiji and Nene look at the stars, and talk about the universe, exploring space, and the good things on Earth. Nene asks some pointed questions about love, and it’s clear to everyone who isn’t Seiji that this atypical girl with her sheltered upbringing is rapidly falling in love with him. Gee, I wonder why Seiji doesn’t pick up on these things. It’s almost as if he’s aromantic or something. But still, it’s a cute character-bonding moment: Nene’s background is revealed a little, Nene and Seiji actively share interests, and Nene once more tries to counter Seiji’s low self-esteem with some much-needed encouragement.

And then, after Nene leaves… 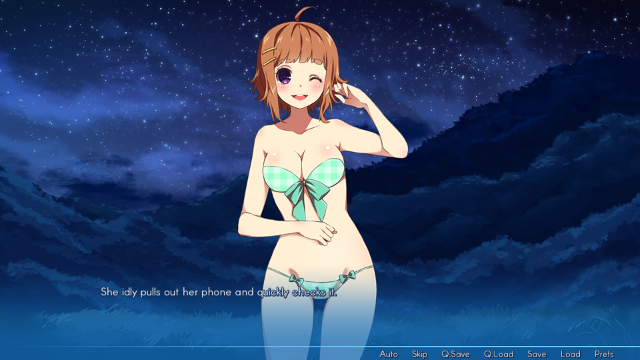 …She idly pulls out her phone from *where*? I know some women carry phones and stuff in their bra, but this swimsuit is so tiny and form-fitting it might as well be *body paint*.

…it’s revealed that Ayumi and Momoko followed Seiji to spy on him. 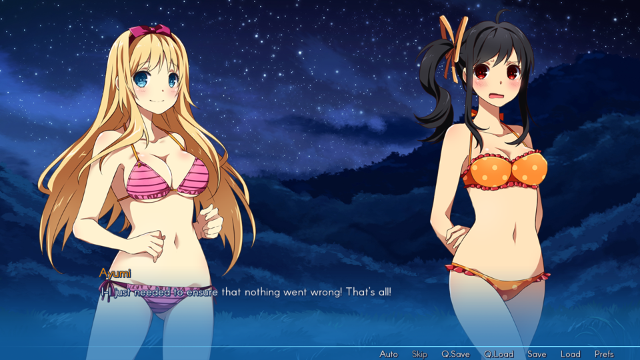 Ayumi even says in so much words that she needs to control what Seiji does and does not do.

I mean, holy shit. If this doesn’t trigger massive alarm bells for you, I envy the blessed life you’ve lived so far. This is really a major major no! How can you have so little trust in Seiji’s motives and so little respect for his personal space? If there was ever one moment that shows the completely one-sided nature of this ‘relationship’, it’s this one.

And then Sakura Beach 2 happily provides a second one. 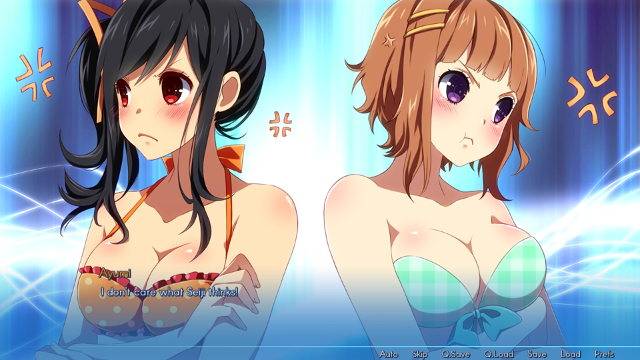 I mean, do I really have to add anything here? 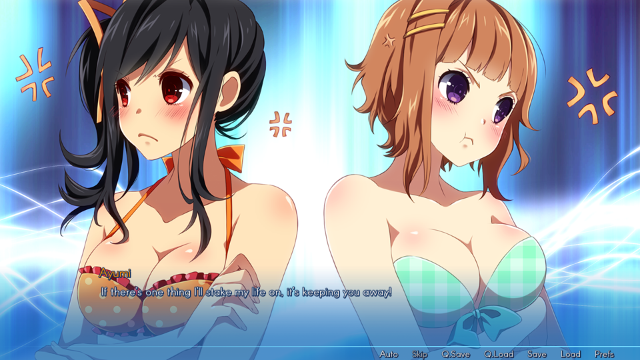 Ayumi literally says ‘I don’t care what Seiji thinks, I’m keeping you away from him whether he likes it or not’.

Actual real fact: when Sakura Beach 2 hit this part, I had to put the game down and walk away for a few days. I was much happier running across Fallout 4‘s post-apocalyptic hellscape than being… here. At least the Raiders are honest about their awfulness.

Surprisingly, though, Sakura Beach 2 mellows out a little bit after this.

I mean, any hopes of the situation being resolved subtly are quashed when Nene officially joins your harem. Yes, officially. Note that it doesn’t actually matter here what option you picked at the start of the game! The existence of a harem is just presumed at this point. And I know what you’re wondering now: does the addition of a third person lead to even more scenes of the girls gratuitously getting buck naked together? 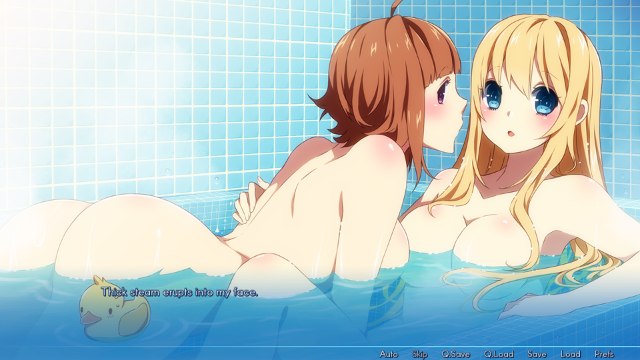 Reader, *you have but to ask*!

But with Nene in place, Sakura Beach 2 starts sanding away some of its abusive edges.

The thing is, for all my yelling, I’ve never really believed all this bad stuff to be intentional. That actually makes it worse instead of better, but I can see the original intent. Ayumi and Momoko were never intended as a controlling abuser and a sexual harasser; they’re intended to be insecure and over-excited, respectively. And…

If any significant time had passed between my Sakura Beach review and this game releasing, I could have mock-patted myself on the back for this. But it feels for all the world like, halfway into the game, the Sakura Beach 2 writers started realizing all that stuff I wrote about. That their well-intended characters were coming off as major creeps. Maybe they finally played the first game for themselves?

Whatever the reason, though, the second half of the game starts trying to bring these original good intentions to the fore. So Seiji has a talk with Momoko, where she tells him she just really wants him to be happy — with her if at all possible, but Seiji’s happiness is the paramount goal. And Nene and Ayumi stop solving their conflicts through sulking and violence, and start solving them through building sand castles.

Or maybe I just wanted an excuse to get this sand castle screenshot in.

Perhaps the biggest thing is a talk with Ayumi, where she finally reveals that her beef with Nene is about jealousy. I mean, duh, obviously, but it’s a very specific kind of jealousy: Ayumi is upset that she ‘had to work hard’ to get Seiji’s attention, while Nene could just ‘sweep in and take it’. 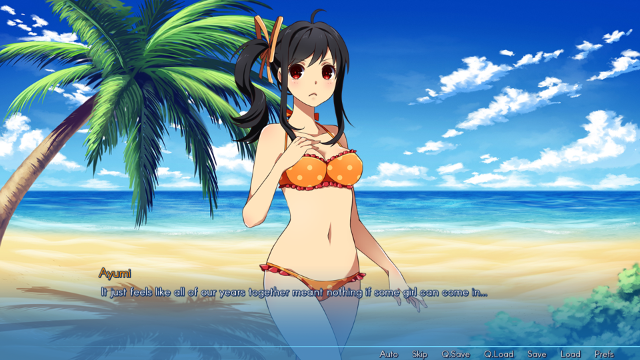 It was at this point I understood that Ayumi is basically a Nice Guy.

And then the whole thing ends with another emotional confrontation under the stars, where the girls ask you to pick which one of them you really love. Yes, even though we just went through the whole extended process of adding Nene to the ‘arrangement’. Here, you can either pick one of the girls — upsetting the other two, but leading to a semi-touching first kiss scene with your new belle — or declare your love for all three of them, kicking that ‘final choice’ can down the road once more. Sakura Beach 3, maybe? 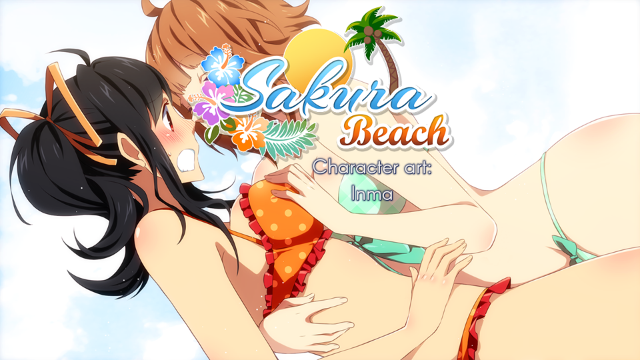 Then the credits replay all the lewd scenes, in case you missed one of them.

It’d be a stretch to say I enjoyed Sakura Beach 2‘s second half. But I definitely felt less icky and disgusted about it than I did about the first half. Instead, what I felt was more… mourning?

We are told at the end of Sakura Beach 1 that Ayumi and Momoko have been in love with Seiji for a really long time. Both of them are incredibly skilled, and attractive, and popular, but they’ve always only had eyes for this one dude. He never quite answered those feelings, though, and they never learned to deal with this well: Ayumi became gruff and standoffish, while Momoko piled on the only persuasion technique she could think of — literally shoving her boobs in his face over and over again.

Regardless of your choices, Sakura Beach 1 ends with both of them confessing their feelings to Seiji. And depending on your choices, one or both of them becomes Seiji’s canon girlfriend. Both girls think this’ll finally make them happy.

It doesn’t, obviously. Try as he might, Seiji doesn’t reciprocate their feelings. He just doesn’t! I know I put my ‘Seiji is asexual and/or aromantic’ theory forward as a bit of a joke, but Seiji himself makes a lot of comments to that end. 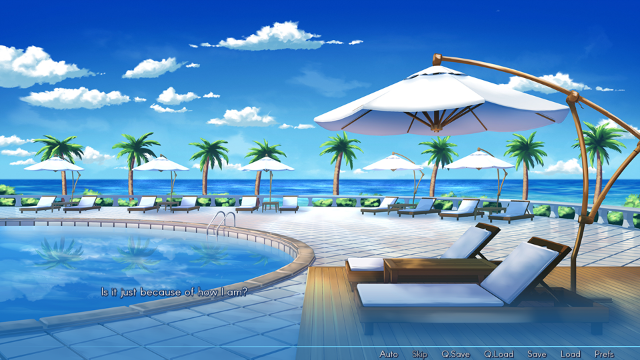 ‘Why can’t I see them as partners instead of just friends?’

But then, it might also just be because they’re all terrible matches. I haven’t seen Ayumi or Momoko share any of Seiji’s interests.

The girls love Seiji, but Seiji doesn’t love the girls. And this is unfair. It’s almost a gut reaction, fed to us by decades of badly written rom-coms. ‘If you really really love somebody, and you tell them how you feel, they’ll love you back and everything’ll be perfect‘. But this doesn’t happen in the Sakura Beach interim: Seiji is still Seiji, no matter how much he wants to please his friends. And make no mistake, that’s what it is: Seiji is trying to answer the girls’ feelings because that’ll make them happy. It just… doesn’t happen. You can’t fake love.

And then suddenly Nene enters the picture. And she is a good match for Seiji. A great match, even! Almost as if she was written that way.

Like I said, I’m sure the ‘canonical’ Sakura Beach 2 ending is the harem one. Sakura games gotta Sakura and all that. But for me, the only ending that makes sense is the one where Seiji falls for Nene. He actually falls for her. That’s right, nerds, you heard it here first: Seiji and Nene is my Sakura Beach 2 OTP. I will fight you over this.

If you pick this ending, there’s a sad little scene at the end where Momoko and Ayumi act all disappointed. ‘Seiji, were you never really in love with us at all?’ And I just wanted Seiji to yell… ‘No! No, I never was! This was all the two of you projecting your desires on me!’ 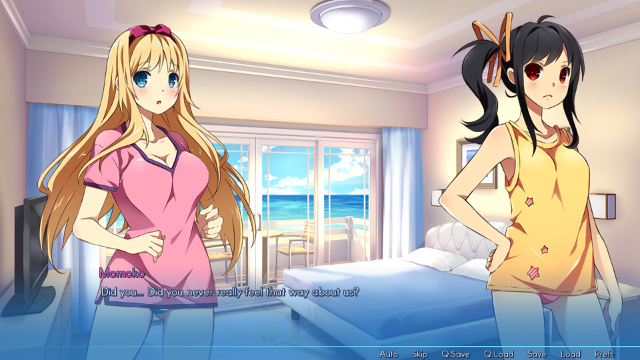 As it stands, Sakura Beach 2 can’t afford to spend too much time on this one actually interesting story. Because it has three starting points to connect to four possible endings, everything has to remain shallow by default. And if you factor in the necessary cheesecake graphics…

Still. Recall fondly what could have been, I guess.

Wait, was I actually almost reservedly positive about Sakura Beach 2 at the end here? Man, that feels weird.

Sakura Beach 2 is… it’s almost Sakura Beach 1, almost, but not quite. It pulls away from the same disgusting narrative path halfway in, in favour of something that’s almost an actually interesting story. It doesn’t quite manage to get there, but middle-of-the-road blandness still beats outright emotional manipulation in my book.

I’d never blanket recommend buying Sakura Beach 2, because you’d also have to get 1 to get the full story. And just don’t get Sakura Beach 1, okay? That said, if you already own Sakura Beach 1, Sakura Beach 2 is probably worth getting for putting a slightly more human and positive spin on the larger narrative. I don’t know if I’d recommend you spend ten bucks on it, though, but that’s entirely up to you.

Jarenth is almost free. Almost free! To celebrate, follow him on Twitter or hang out with him on Steam. And if you dig Indie Wonderland and Ninja Blues in general, why not consider supporting our Patreon campaign?