When I started this adventure into Sakura depravity, I was expecting four weeks of ‘main’ Sakura games. Angels, Swim Club, Beach, Fantasy. I had a plan, as they say, and the plan was good.

And then at the last minute, at the proverbial eleventh hour, Steam dropped a new Sakura game in the store. The sixth feature-length Sakura. And not only that: it was actually a sequel! To one of the games I was going to play, no less! I recognize signs when I see them: there was obviously no way I wasn’t going to have to add this one to the repertoire.

And given how much I’ve been emphasizing last week’s Sakura Fantasy as being a Chapter One, you probably won’t be surprised to learn that this week’s game is…

Okay, okay, alright. Calm down, self. Pre-judge not the sequel by the predecessor’s merits. This game might surprise you. It could happen!

And besides, it’s not like Sakura Beach (1) was all bad. It had some okay spots! Hey, remember that one really cool sunset background image we all liked so much? 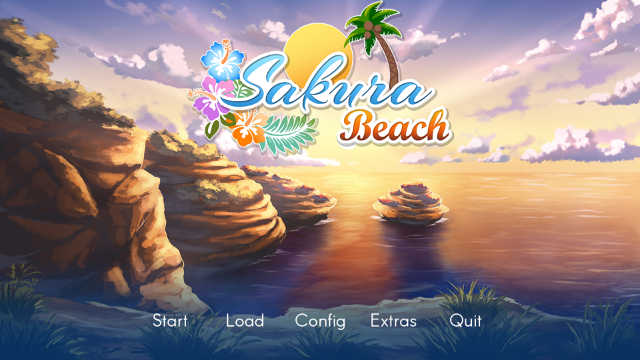 Is this a peace offering, or a warning sign for excessive content re-use? Place your bets now!

Well. I know these visual novels all have the same general menu structure… but aside from the background, Sakura Beach 2 is literally a carbon copy of Sakura Beach. Same colours, same spacing, same layout. It’s even playing the exact same music.

And hey, look at that! The music is triggering a Pavlovian dislike reflex. I’m salivating at the thought of playing any other game but this one.

This bodes well for the rest of the review!

“Who confessed to me under the stars?” 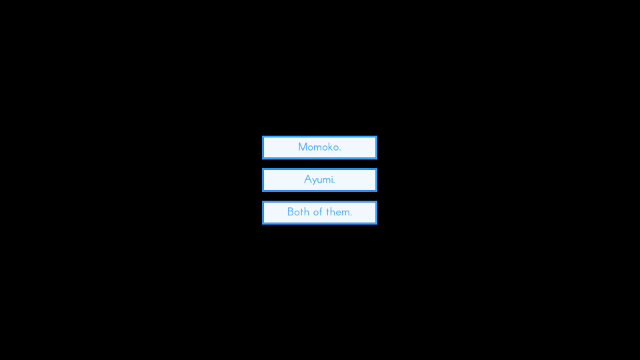 I didn’t even get a chance to wonder which one of Sakura Beach‘s endings would be canon. I was sure it was gonna be the harem one, because visual novels. But apparently you can just outright decide to shaft one of the girls! In the past, even. No option to ditch both of them, sadly, but that would just lead to awesome space adventures.

Anyway, no reason to let good expectations go to waste. Sure, let’s go with the harem ending. How has all that worked out for Seiji, our resident proto-ace space-fanboy? 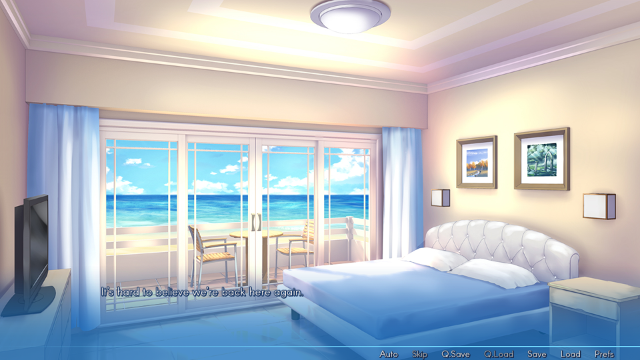 Oh come ON. Are we actually going for this level of asset re-use? Literally the same image, no change? Jesus. I mean, I get the value of keeping the same setting — such as it is for this game. But even friggin’ Winter in Fairbrook had the decency to just slap a coat of snow paint over everything.

Anyway. Turns out Seiji’s life has been a bit of a mixed bag since the previous vacation! On the one hand, he’s doing well academically: Momoko and (particularly) Ayumi helping him out has let him pass his exams with flying colours. Since that apparently wasn’t a factor before, I like the implication that Seiji’s ‘friends’ didn’t start helping him until they blackmailed him into a confession of love. But then, that’s actually par for the course for this game.

On the other hand, Seiji’s social life is harder than ever. Nobody at school seems cool with the idea that he’s kinda-reluctantly dating the two hottest girls at the same time. I wonder why people would be upset with this. 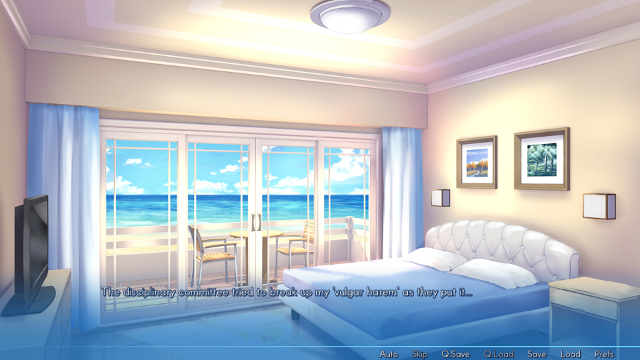 Hah! You thought I was gonna give some good reasons, but it’s all petty nonsensical bullshit.

And then there’s the girls themselves. Which… well, I’ll let Seiji tell it. 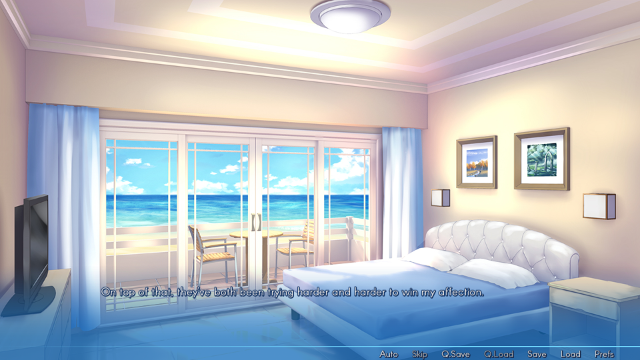 This isn’t actually all that weird? 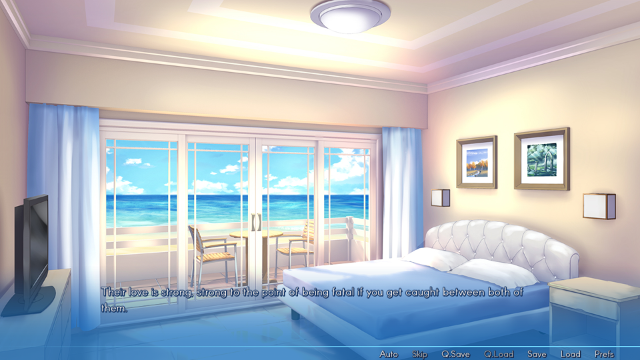 Speaking of the girls… 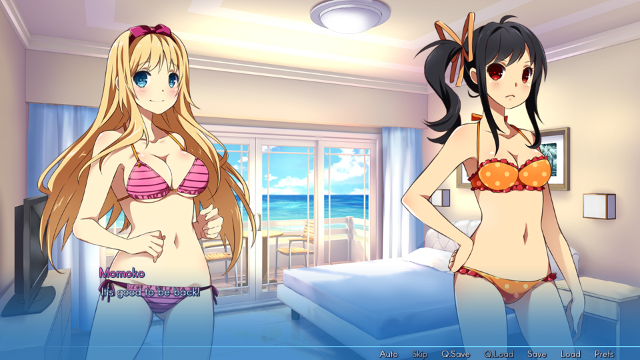 My brain is doing some rapid-fire ugh-ing right now.

Really? Really. You guys didn’t even slap like a Photoshop colour change over those swimsuits? Wow, I’m definitely feeling super validated as a return customer right about now. The same music, the same backgrounds, the same setting, the same characters, the same graphics, the same awful stilted dialogue. I’d call this an overpriced expansion pack, but that would imply it’s expanded somehow. Did I accidentally boot up the first Sakura Beach by mistake? 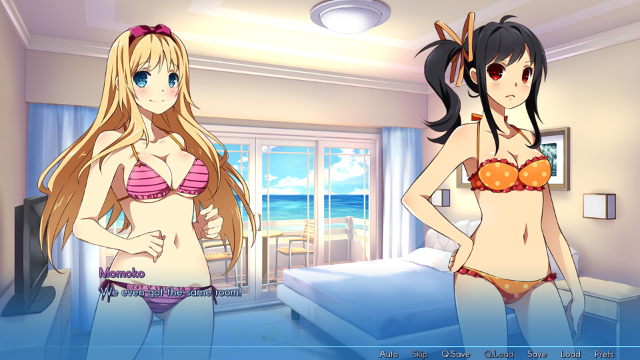 I guess I can appreciate the lampshading, though. 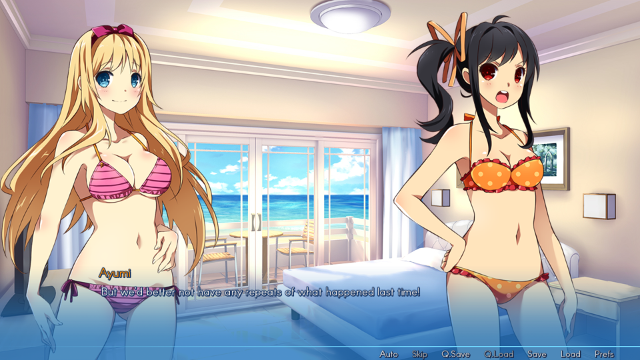 Dialogue happens. Momoko is being all cutesy and affectionate, doing that thing where she always talks about Seiji in the diminutive. Ayumi plays the tsundere role, flipping from indignant anger to fluster and back almost at random. And in-between them, Seiji’s doing his best to focus their terrible attentions on something other than him. The more things stay the same, I guess. 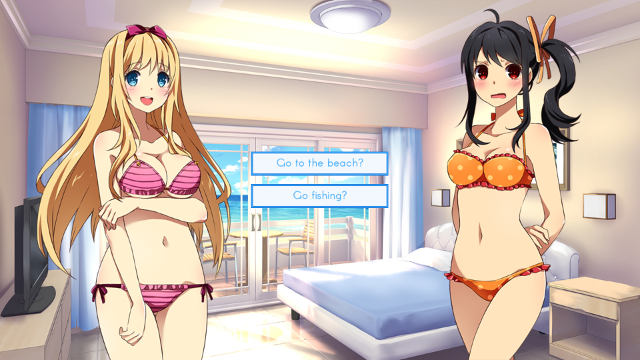 Man, I could go for some fishing. Too bad that’ll never happen. 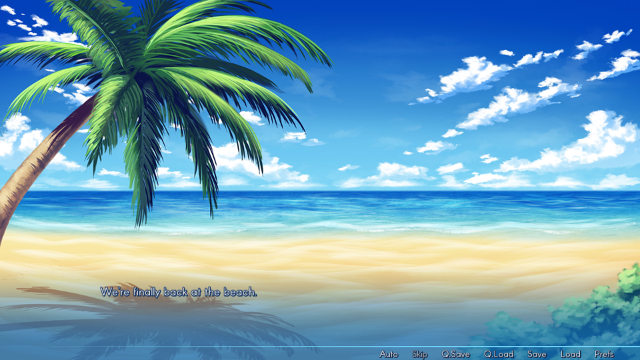 We’re finally back! It’s been, like, *two weeks* since I last saw this picture.

Beach shenanigans happen. Some accusations, some unrequited flirting, some swimming, some…

I’m sorry, readers. I’d love to describe all this in more detail, but it’s almost literally the same shit as the last game. Is there any value to me re-treading that old ground? Beach shenanigans happen. 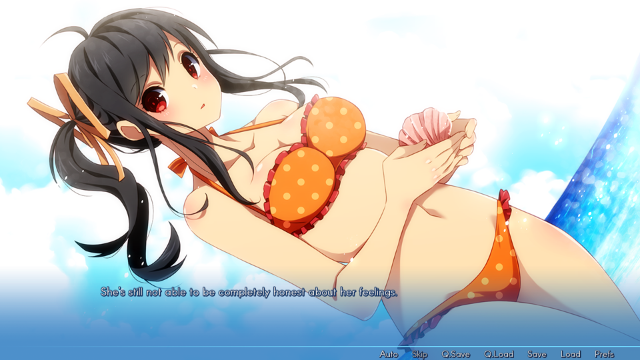 At some point Ayumi picks up a sea shell, and the game makes a whole *thing* out of it.

The only really interesting thing that happens during the whole interminable scene is a Seiji Relationship Update. Turns out that even after the last game’s whole moonlight confession scene, Seiji still isn’t super comfortable being in this relationship. It’s been several months now, and…

Yes, ‘several months’. I also wonder what kind of magical space world these people live on, where revisiting the same beach in a four-month period gets you exactly the same level of summer warmth and sunny goodness.

Anyway. It’s been several months, and Seiji still hasn’t kissed any of his girlfriends yet. Or slept with them, to Momoko’s great disappointment. 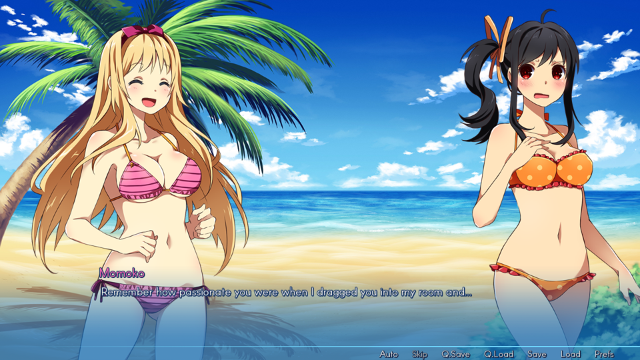 She’s redoubled her attempts to sexually assault him.

The girls are getting a little frustrated, and worried, about Seiji’s ‘lack of progress’. “He’s still so shy!” “We need to get you out of your shell.” Because these are the hallmarks of a healthy relationship, right? Getting pressured into intimacy. Seiji takes the whole thing in remarkable stride, which leaves me free to fume for the both of us.

But then Seiji invites them to go star-gazing, late at night, and neither of them feel up for it. This is basically the most romantic thing this boy can do, and they turn him down for early naps.

Ah well. Some solo Seiji time would be nice, anyway. Just me, and the hills, and the stars, and… 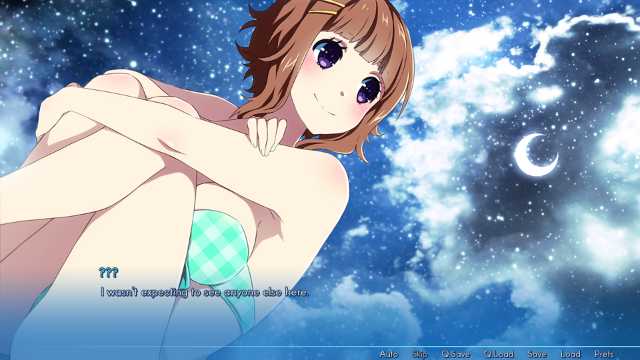 Turns out Seiji isn’t the only star-gazer out tonight! A mystery teal-bikini’d girl is having her own chat with the infinite beyond. Her name is Nene, and now I’m thinking about that one Fairly Oddparents episode with the horse head plushie. None of you can stop me from doing this.

Anyway, it turns out I wasn’t just being facetious. Nene is actually out here to look at the stars. Much like Seiji, she has big dreams about exploring the cosmos. 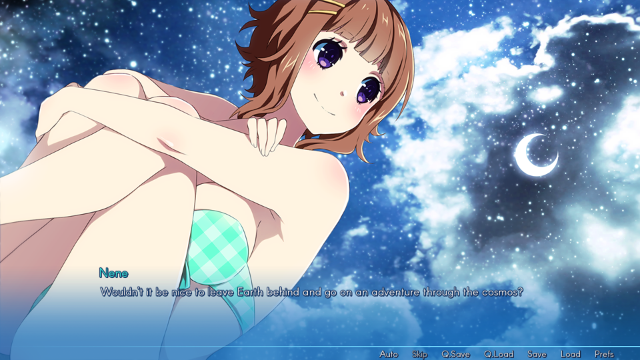 She even wants to live on the moon! I don’t have the heart to tell her how much stock trading that involves, though.

Nene is cute, friendly, interested in space, and — in her own words — ‘a little odd’. And in our own ways, Seiji and I reach more or less the same conclusion: 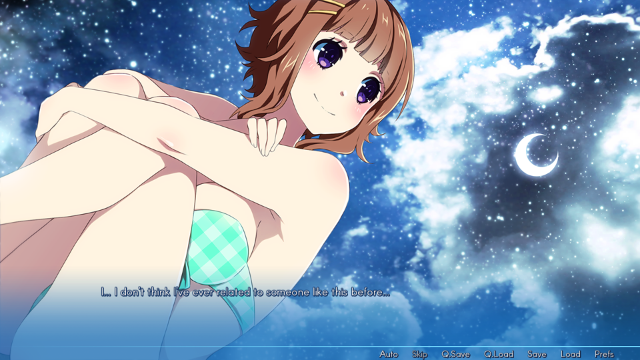 This girl should probably be Seiji’s *actual* love interest.

No, but seriously. Seiji has a thing he does where he sort-of belittles himself: ‘I’m nothing special, I’m just an ordinary guy’. As a recovering shy person myself, it’s an attention-deflecting tactic I’m very familiar with. Ayumi and Momoko respond to this in the expected ways, which is to say the ‘wrong’ ways: Ayumi calls Seiji an idiot and a pervert, and Momoko just coos about how cute he is — both of them start engaging with the mental image of Seiji in their minds, instead of the genuine article. But Nene’s reply is as simple as it is necessary: 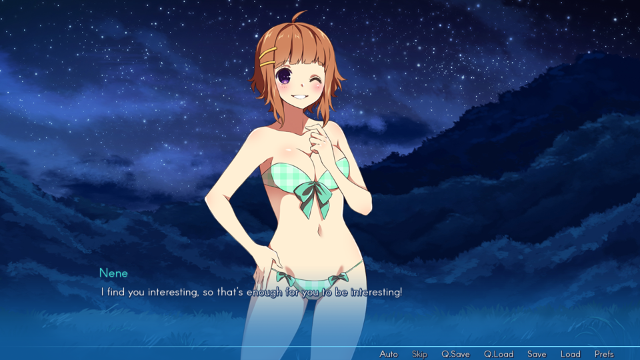 Because a night-time star-hill isn’t a great place to get to know anyone, Seiji and Nene agree to meet on the beach tomorrow. Seiji is worried about Ayumi and Momoko will react. But there’s no need for that, right? They’re his friends first and foremost. Surely they wouldn’t freak out about something as simple and innocent as him meeting his perfect match, a one-in-a-million shot, under the gaze of the eternal stars? 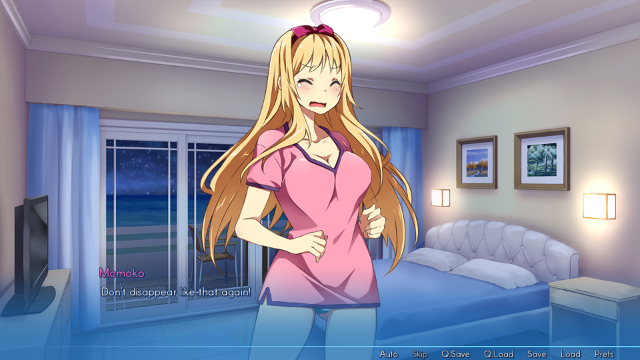 Nah. They’re just blaming him for going out alone, ‘unsupervised’. 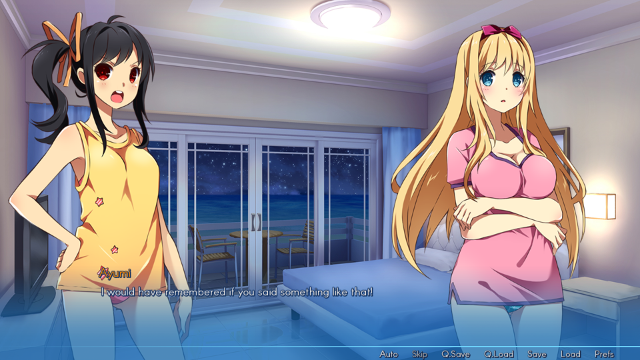 And gaslighting him, for doing something without their express permission.

Between the yelling and the unwanted flirting, Seiji doesn’t even get a chance to tell his friends about Nene. Why would they even be interested in his life, anyway? So that’s going to be an interesting day, tomorrow.

No, but I’m actually kind of wondering what shape this story is set to take. The character of Nene is such a good match to Seiji, I can’t help but wonder if the writers are setting up an intentional subversion of the first game. Is Sakura Beach 2 going to end with Seiji ditching his abusive pseudo-friends to be with a woman he actually likes?

Because, if that happens… I’m not saying that that’ll excuse Sakura Beach 1. But it would certainly make the series as a whole more bearable, knowing that these assholes end up getting their just desserts.