Nope. Nope, it very much does not. 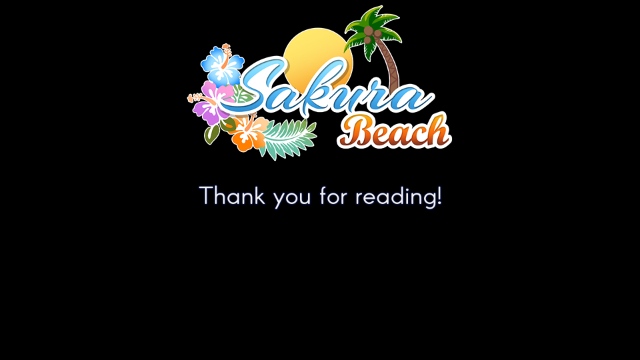 I present now: my credentials for being able to claim this.

Sakura Beach does not bring its story home. It anti-brings it home, in fact, if that phrase meant anything. It drops it off? At a… daycare? Anyway, the point is: Sakura Beach doesn’t actually deliver. It takes a fairly straightforward ‘love triangle’ romantic arc, and turns it into something… else. Something poorly written, overly quickly wrapped up, and honestly rather gross. 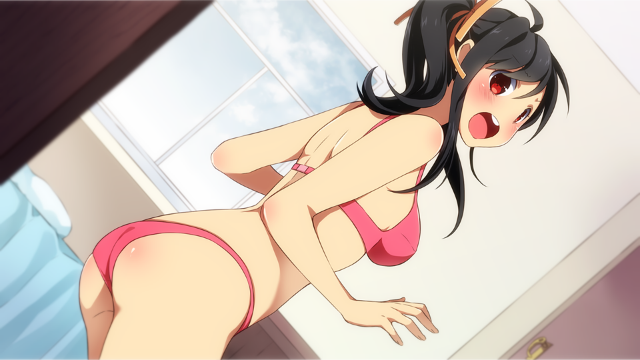 I mean, come on. You call this titillating?

Like I mentioned earlier, Sakura Beach seems to aim for a fairly simple romantic story. The two female leads, Momoko and Ayumi, are both in love with their childhood friend, the male protagonist Seiji. But Seiji, shock of shocks, isn’t noticing this. He has his mind in the stars and his head in the books: Seiji wants to become an astrophysicist, and he’s putting in the committed study hours to make that happen. Makes sense, right? For a driven guy obsessed with space. And as a result, he’s constantly working: exams, lessons, you get the idea. He hasn’t seen his friends much lately; this vacation trip was actually Seiji’s idea to spend some more time with them. But even ‘now’, part of him is always busy. And this upsets and frightens Momoko and Ayumi, who worry that they’re losing their childhood friend — and secret love interest.

So the girls try to get Seiji’s attention through escalating hijinks. You know what kinds of hijinks; this is still a Sakura game. And at the end of the story, one or both of them (depending on choices) finally confess their True Feelings to Seiji. And the story ends with Seiji’s newfound focus to live in the moment as well as in the future. 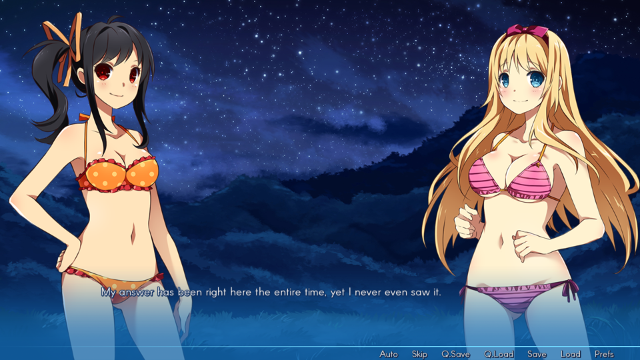 Sounds alright enough, doesn’t it? This is the story that Sakura Beach wants to tell, and it’s not in and by itself bad. The problem is just that it fails at doing this. Pretty badly. Over time, Sakura Beach‘s narrative falls apart on several fronts: some cognitively dissonant, some logically problematic, and some just outright bad.

The first issue I noticed with Sakura Beach is that the game doesn’t really sell me on the three characters’ friendships. Specifically, Seiji’s friendships with Momoko and Ayumi. Sakura Beach is all tell and no show in this regard: it has the three characters mention their age-old friendship over and over, but we hardly ever actually get to see it. I’ve mentioned this several times on the previous page, because it didn’t take all that long for the cracks to appear.

What do friends do? Friends support each other, right? If one friend is struggling to achieve a dream, then the other friends have their back. This is like Friendship 101: Support Your Pals.

But Momoko and Ayumi never support Seiji and his dreams. They constantly mock and belittle him: Ayumi calls Seiji an idiot — ‘affectionately’ — whenever he mentions space or starts daydreaming, and Momoko seems to think of him as more of an adorably misguided puppy than a person. They dismiss his dreams over and over, and clearly convey that they know ‘what he wants’ better than him. And Seiji notices this, too. 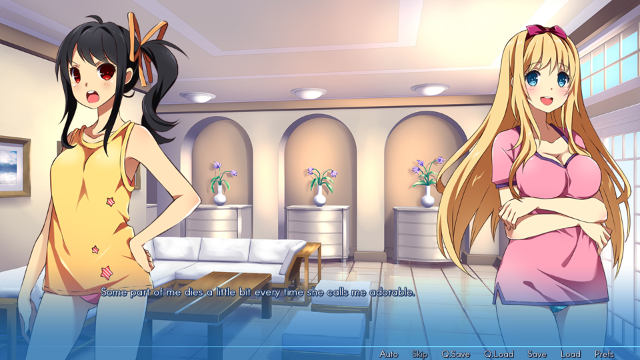 Does this scream ‘friendship’ to you? 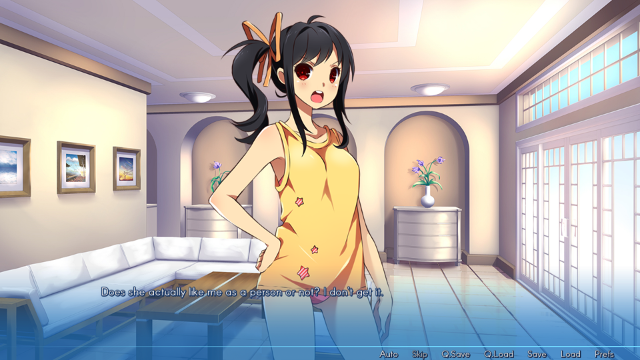 Because this does not scream ‘friendship’ to me.

‘Seiji, stop those silly space daydreams! Burying your head in books all day won’t make you happy!’ Yes it will, woman. What are you even talking about? Have you not noticed my space obsession since I was six years old? I want to become an astronaut.

Now, this in and by itself isn’t super bad. Just a little strange, honestly. And Sakura Beach attempts to justify the girls’ behaviour by implying that this is an oversight on Seiji’s part: he would be much happier, the game posits, if he’d notice that the two attractive women in front of him are super into him. If only he opened his eyes.

But here’s the big issue with that: Seiji does notice. He just doesn’t reciprocate.

Putting on my fan-theory hat for a moment here, but… Playing through Sakura Beach, I more and more got the strong feeling that Seiji is some degree of asexual. Or aromantic, maybe. Or both. He’s never been sexually or romantically attracted to anyone. And, again, he’s noticed this. Seiji knows it’s outside the accepted norm to never have a had a ‘girlfriend’ or a romantic/sexual interest. He just thinks the norm is silly, and he doesn’t particularly care. 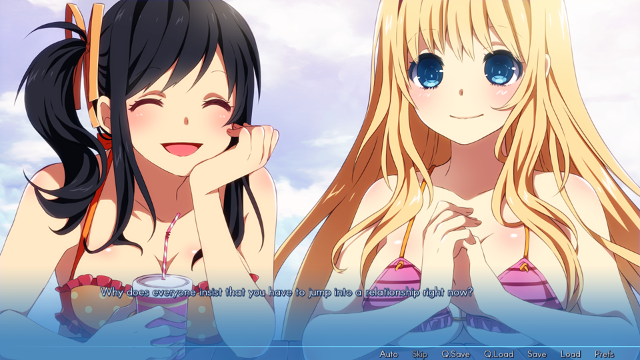 “Isn’t high school enough trouble without having to worry about girls, too?”

Even when Momoko and Ayumi are being overtly, intentionally sexual in front of Seiji, it only partially registers. He notices the display for what it is, sure, sexual overtones at all. But he’s never aroused, or interested, or lewd. Just a little embarrassed, most of the time. 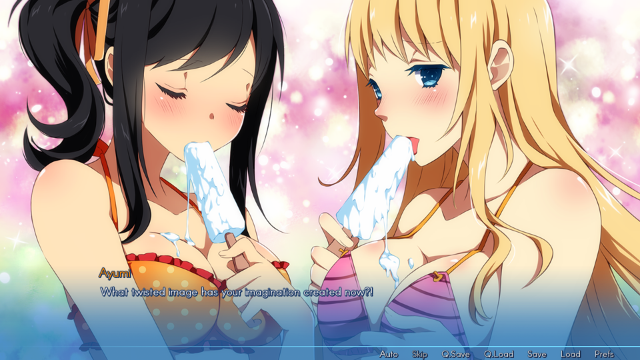 This was 100% intentional on their part. The innuendo flies *wildly*.

So Seiji isn’t really into the girls. Or really isn’t into the girls, rather. But that doesn’t stop them from trying to ‘win him over’. And it’s here that Sakura Beach turns a little bit…

Run a little thought experiment with me here, okay, readers? Viewed from a more gender-neutral lens, Sakura Beach‘s is actually pretty upsetting. Much moreso than other Sakura games. Here, try these summaries:

Sakura Spirit: a nascent judo champion travels through time. They hang out with oblivious fox spirits and tsundere warriors, fight off ooze monsters, gets mistakenly propositioned a lot, and fall in love. Nothing problematic immediately jumps out here, does it?

Sakura Angels: a descendant of a magical bloodline discovers that they’re being protected by powerful, but silly, guardian angels. They spend some time with the angels, devise a plan to defeat an ancient magical evil, befriend and redeem a servant of darkness, and fall in love with one or both of the angels. Tale as old as time, am I right?

Sakura Swim Club: a depressed and family-pressured student enters another parent-chosen school in order to live up to expectations. They join a swim club, where the two members and they help each other out with their respective emotional problems, improve each other’s lives, and all fall in love in the process. I wouldn’t be surprised if Lifetime has an option ready as we speak.

Sakura Beach: a space-obsessed daydreamer takes their childhood friends on a holiday trip. The friends have a largely unrequited crush on the dreamer, and get increasingly overt in their attempts to notice them romantically and sexually. Eventually, they emotionally blackmail the protagonist into a ‘romantic’ confrontation, where they confess their feelings, and the protagonist sort-of-reciprocates. 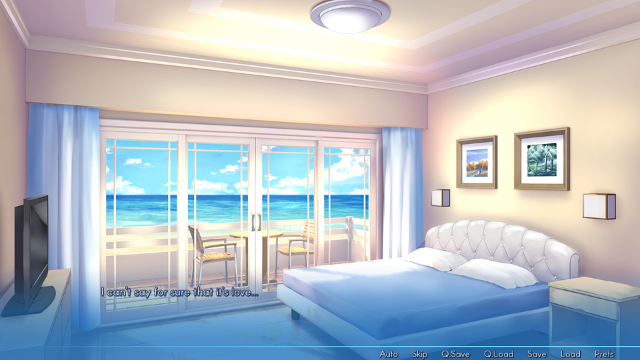 Say it with me now, readers: eeeeeeeeesh.

Sakura Beach is a really weird story, because it’s full of what’s essentially sexual harassment and unwanted advanced. The side characters repeatedly force the main character along in their ‘romantic’ plans, and constantly confront him with obvious sexual innuendo. Once or twice, they actually physically force him to do things. 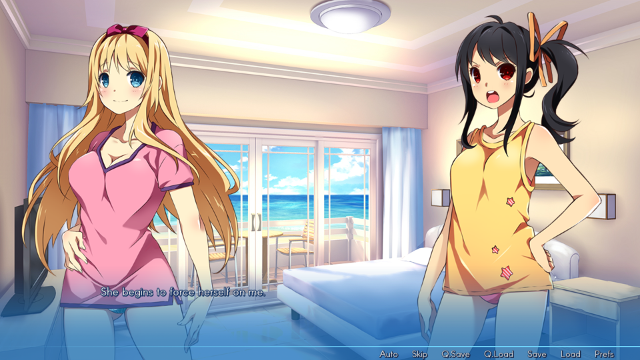 More than any time ever before, I *really* wish I was joking here.

That’s when they don’t go to outright violence, too. Remember the pillow scene from the previous page? It turns out Seiji gets beaten to the point of unconsciousness several more times over the course of the story. The girls beat each other up a lot, too, but they never ‘wake up the next day, with little memory of what happened’. For walking in on a woman in her underwear.

And the only reason this is all played as a joke is because Seiji is a shy and unassuming man, and Momoko and Ayumi are very attractive women. As readers, we are expected not to empathize with Seiji as-is, but to imagine what ‘we’ would ‘want’ to happen in this situation — for the hot women to want to jump our bones at every turn.

And that’s… disgusting? It disgusted me, let’s not mince words.

Seiji isn’t interested in these women. He’s not! Even if he isn’t some degree of ace, I never ever got any overt sexual lusting from him. To Seiji, Momoko and Ayumi are his childhood friends. Nothing less, but also nothing more. And when they start sexually harassing him — again, let’s not mince words here — his increasing discomfort is always obvious.

And yet Sakura Beach plays all this as a good thing. Even when the finale boils down to, and I swear I’m not making this up, one or both of the girls essentially telling Seiji ‘I’m going for a walk now, either you find me so I can confess my feelings to you, or we’re not friends anymore’. 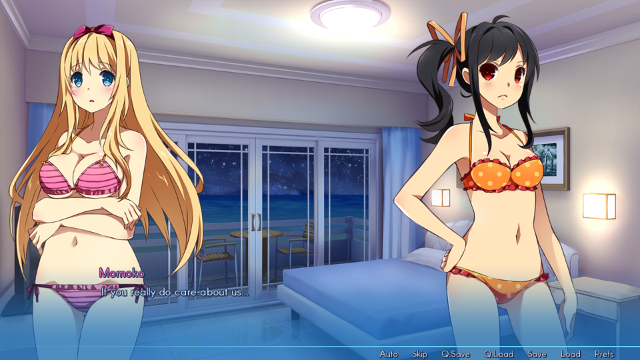 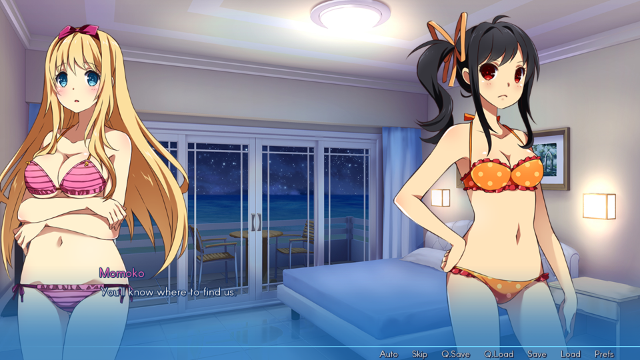 Seiji proceeded to stay in the hotel, using the quiet night to gaze at his beloved stars.

I just… ugh. Gimme a second to recover, here.

Sadly, Sakura Beach‘s failings go far beyond its disgusting harassment and emotional blackmail story. ‘Sadly’, because it means I have to spend more time talking about it. Even structurally, the story makes very little sense: it’s tonally all over the place, and relies on last-minute ass-pulls to keep even a semblance of sense.

For the first half of Sakura Beach, the story unfolds more or less as I’ve described here. The girls harrass Seiji because ‘him chasing his dreams won’t make him happy, we will’. But then, about three-fourths in, Sakura Beach seems to realize that it hasn’t actually sold us on this tale. So, in order to make everything work, it suddenly reveals a heretofore-unknown missing mother figure. Suddenly, Seiji realizes he’s not actually focusing on studies because it’ll make him happy: he’s focusing on studies to please the mother who abandoned him out of some sense of obligation. You know, as people are wont to do.

Okay, that was a low blow. In a better story, this could have been an interesting reveal. The protagonist realizing that their drives have a grimmer origin, that their ‘dreams’ are a self-built justification for a sense of ‘never being good enough’. But Sakura Beach isn’t a good story. So the ‘reveal’ comes from thin air: suddenly, without much prompting, Seiji ‘realizes’ that everything he’s ever wanted was wrong. Even though he’s been studying for his entire life and his mother figure only entered his life a few weeks ago. Sure, whatever. That’s how stories work, right? 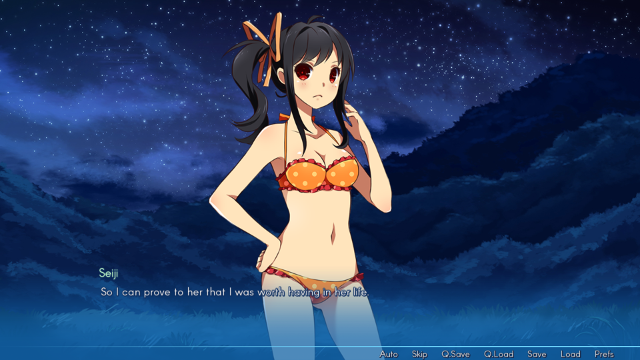 Oh, and that whole ‘Seiji never notices the girls are into him’ bit? This is undercut pretty strongly when there’s a whole sequence where Seiji explicitly asks the girls how they feel about him. And both of them reply with a variant of ‘just friends, you dummy’. 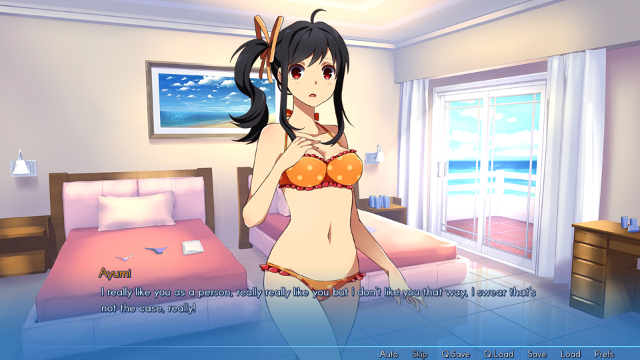 There is no *possible* way to misinterpret this. Later, Ayumi will scold you for misinterpreting this. 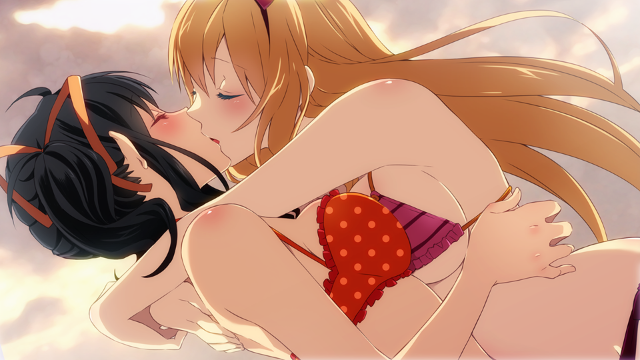 I really have nothing else to add here. I played through Sakura Beach three times, to unlock the three endings — exactly the same setup and general flow as Sakura Angels, an infinitely better game. And Sakura Angels is in no way good. But compared to Sakura Beach…

Just do not get this game. Seriously. Just don’t. It has zero redeeming features. It’s a Bad Rats 2-level stain on your Steam library. You don’t want to waste ten bucks on Sakura Beach.

As with many things, Lewis Carroll said it best:

Jarenth can think of no better reason to quote Lewis Carrol than to warn you away from this game. To celebrate, follow him on Twitter or hang out with him on Steam. And if you dig Indie Wonderland and Ninja Blues in general, why not consider supporting our Patreon campaign?