Week 3 of VNADS II: Sakura Harder is here, and we’re going much stronger than I’d expected. Sakura Angels was ‘somewhat okay’, and Sakura Swim Club turned out to be actually good. And I know you guys mostly came here to watch me suffer through six weeks of garbage, but… I’m kind of okay with this.

Also, I’ve been thinking. Sakura Swim Club beat Sakura Angels, which beat Sakura Spirit. And what’s the one element that’s been increasing over all three games? That’s right: water. Water fun activities, to be precise. Sakura Spirit only had one lazy pool scene, and it was bad. Sakura Angels had an extended cheesecake beach scene and monster battle, and it was okay. And obviously, give or take half of Sakura Swim Club involved swimming, and the nuances thereof. The trend is clear: ‘more water’ equates ‘more gooder’.

Let’s see if we can’t keep that trend up, alright. This week, let’s take a visit to a beach. A… Sakura Beach.

Man, look at this title. Look at how beachy this title is. I’m not even there, and I’m feeling I should put on some sunscreen. 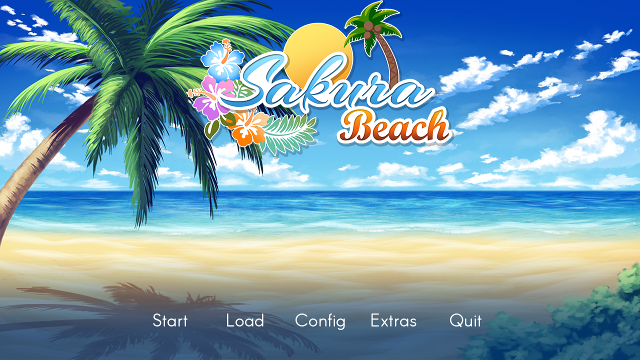 I can skip all of the preferences stuff here, yeah? You guys get it. Go check out one of the earlier Sakura reviews if you really need to see it. They’re all basically identical. This one is white and blue.

The rest of us, though, let’s go to the beach! Yeah! Sun, sand, sea, swimsuits. Oh, man, I can’t wait. I’m only one New Game button away from… 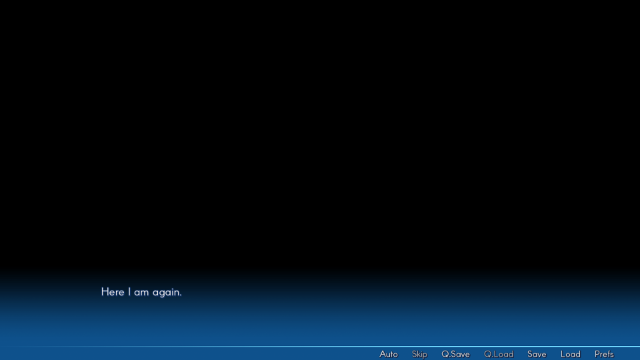 It’s always such a pleasure.

Well. I can’t say this is what I was expecting.

“Here I am again,” a text-voice narrates. “Drifting through the stars. Nebulas, galaxies and black holes rushing past me in a blur.” 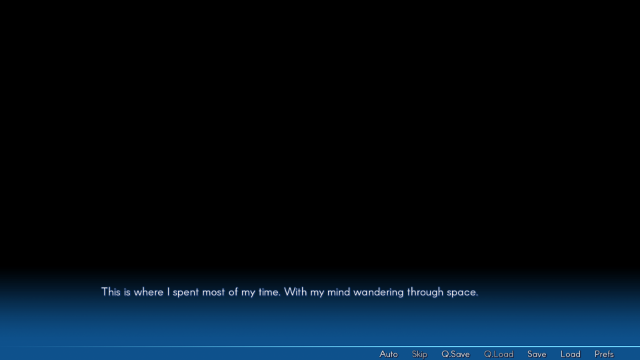 Hold on again, this person is a *mental* space traveller? Like, astral projection? That’s *double rad*! 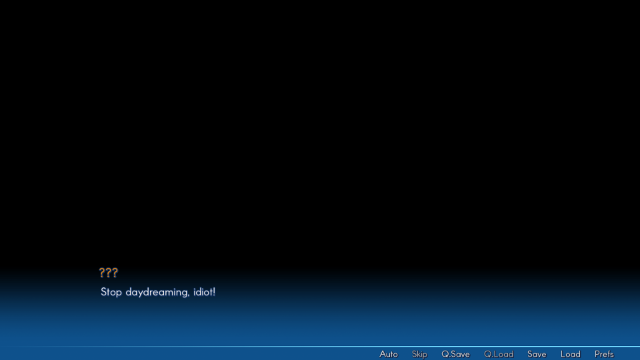 And so, after only a dozen or so space daydream paragraph, my character finally opens his eyes. I know, buddy, I know: I’m just as hesitant to start another one of these Sakura adventures. But here we are, regardless.

My character opens his eyes to a fancy sunlight living room. Very beige, for some reason. There’s pictures on the wall, flower vases in alcoves, a giant window wall; you know, the usual.

I can’t really enjoy the place, however, because I’m getting scolded. For daydreaming. I’m getting scolded by the same mysterious voice that woke me up earlier. The voice’s name is question marks; if I know my Sakura games by now, that means I’m about to be introduced to one of my new female companions for the next two to three hours. 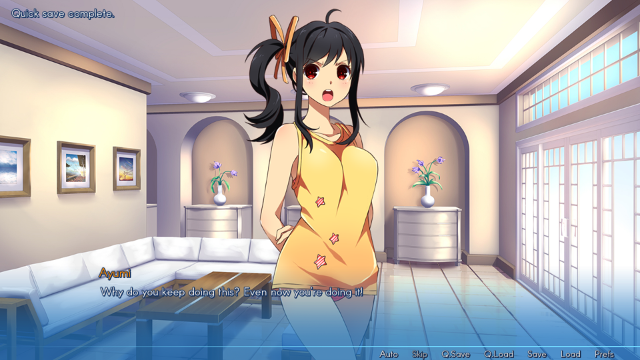 And then, something unexpected happened.

This woman isn’t even wearing a hilariously impractical, skin-revealing outfit. Sure, she’s showing a lot of skin, but what she’s wearing seems to be fairly normal casual beachwear. The game isn’t even making a big fuss of you seeing her underwear! Normally that’d be like, eight special animated scenes.

Man. At least the glistening boob-eyes are still in place. Visible through the top, even. If Sakura Beach had taken those away from me… I mean, can you even call yourself a Sakura game then?

Then a third player enters the scene! 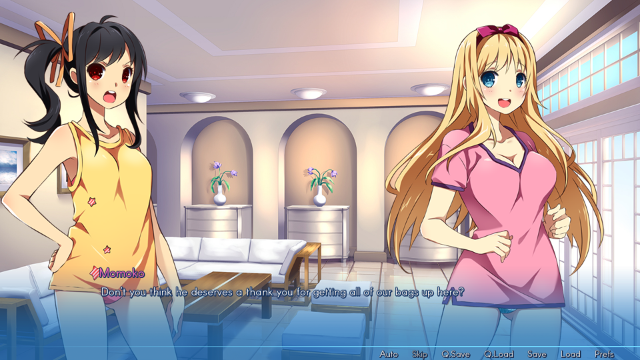 Finally, some unnecessary cleavage. Was that too much to ask?

While Ayumi mostly yells at Seiji to do things, Momoko seems to take more of a belittling tone. Or flirty joking, if you want to be more accommodating. Like so: 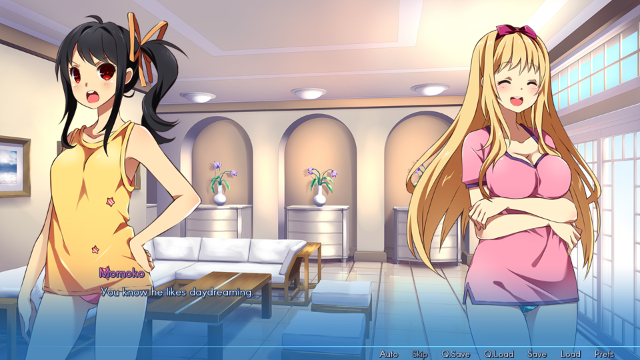 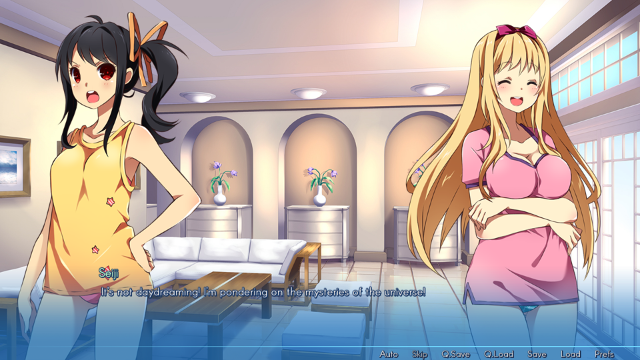 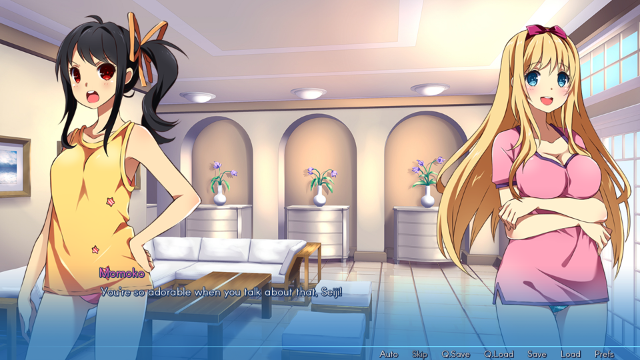 I mean, he *is* kinda being adorable. She’s not wrong.

Ayumi and Momoko stand around talking about Seiji a little more; the latter thinks he adorable, ‘like a puppy’, while the former is being tsundere about him. 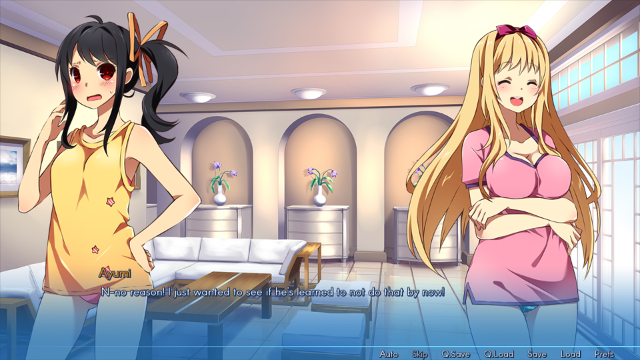 Of course she would be. What’s a Sakura game without tired anime stereotypes?

They actually start fighting about who ‘gets to take Seiji places’, in the least subtle foreshadowing I’ve ever seen. Momoko employs thinly-veiled flirting, while Ayumi uses the tried-and-true ‘bossing Seiji around’ technique. Neither of them, crucially offer to carry their own damn bags. So hey, guess what my first fun activity in the hotel is!

Well. I say ‘my’, but I’m just as willing to let Seiji do all the heavy lifting. He’s just so good at it!

Seiji monologues a bit during bag-carrying. He… doesn’t come off as being too happy about all this? Ayumi and Momoko are his childhood friends, to hear him tell it, and the three of them are going on this trip together to ‘spend time together’ and ‘make memories’. But at the same time, I’m getting vibes like this: 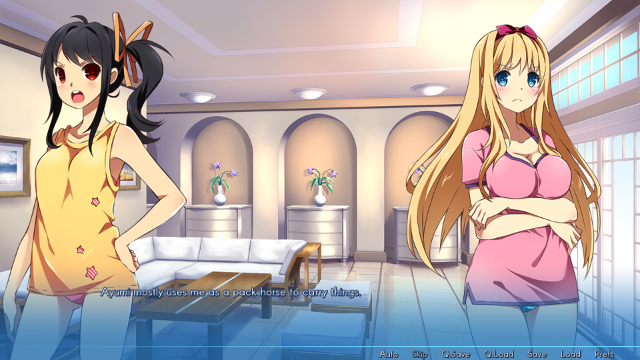 I can confirm that this is accurate: it’s happening right now. 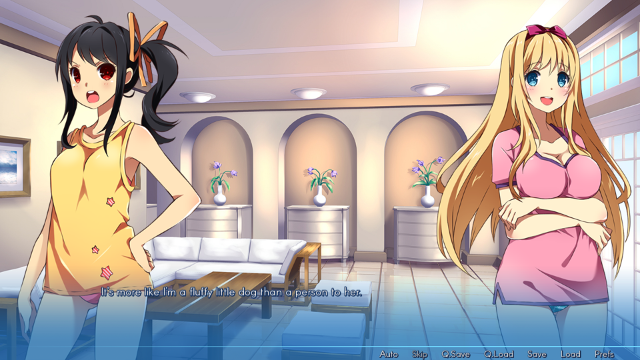 Because what you really want out of your friends is rejection of your intrinsic humanity. Yeah, pals!

There’s some chatting, some implied future nudity, some violence among friends. You know, anime standard. And then Seiji’s alone in his room, finally.

Seiji contemplates in his bedroom, the smallest of the lot, since the girls have claimed the larger bedroom. He’s sure known these women for a long time. It’s funny how time passes! Humans aren’t a very contemplative species, he contemplates. And then quiet time is over. Time to go to the beach.

Seiji goes over to the girls’ room. Seiji knocks on the door. No reply! Seiji moves to open the door, and I immediately, instinctively know what’s coming… 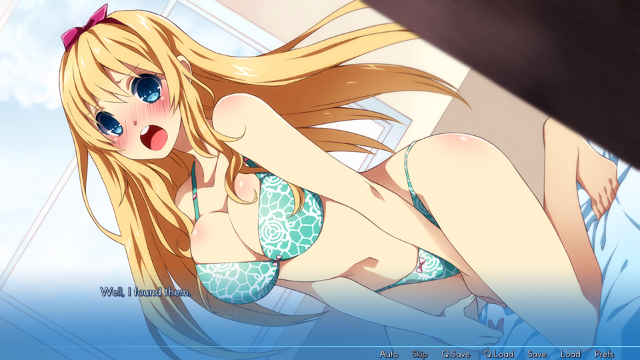 Boy, what a surprise.

I walk in on Momoko, in…

Well. This isn’t actually that bad, is it? The girls told Seiji they were changing into their swimsuits. And here is Momoko, wearing a swimsuit. About exactly as revealing as she was halfway bragging, earlier. It’s a little silly of Seiji to just walk in like that, but all things considered, this isn’t too bad. Right?

No, er… wrong, apparently? It transpires that this isn’t Momoko’s swimsuit, it’s her underwear. And she’s really shocked that you’re seeing her in her underwear. And then she tries to grab a pillow to hide behind, except that doesn’t quite go as planned, and then one thing leads to another… 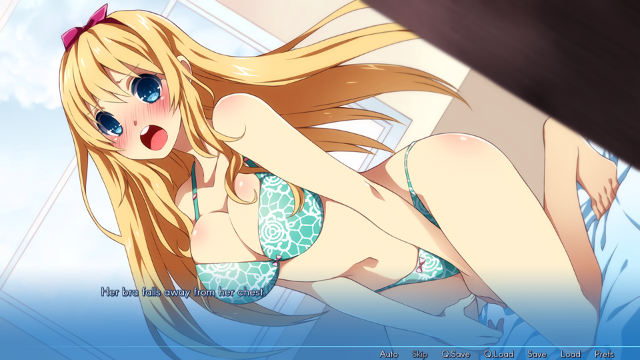 Shouting and recrimination happens, as it would. At one point, Momoko picks up and throws a pillow. Seiji ducks out of the way, the pillow hits the wall behind, and… 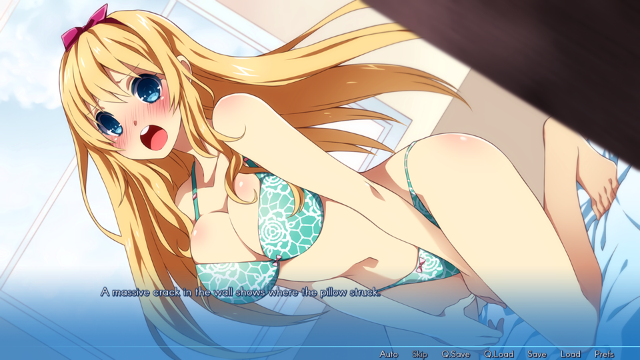 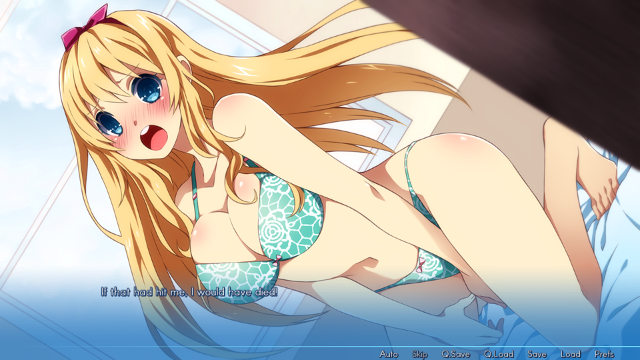 No, but seriously. What?

Jesus Christ. Momoko throws a pillow and she cracks the wall? I… I can’t quite tell if this is played seriously, or jokingly. Is this a game about super heroines? Or Olympic athletes, or something?

Another pillow hits Seiji, and he gets knocked out cold. Wakes up ten minutes later, in his own bed. I guess that’s confirmation for the ‘super powered childhood friends’ theory, then. At least Seiji doesn’t have any broken bones, or serious concussions; all his adventure into boob-seeing has got him is short-term memory loss, and a playful scolding from his friends.

Speaking of which: both Momoko and Ayumi come out in positively tiny swimsuits. Dang, Momoko, at least your bra covered all of your chest. And then the game surreptitiously asks me which of the two I like better. 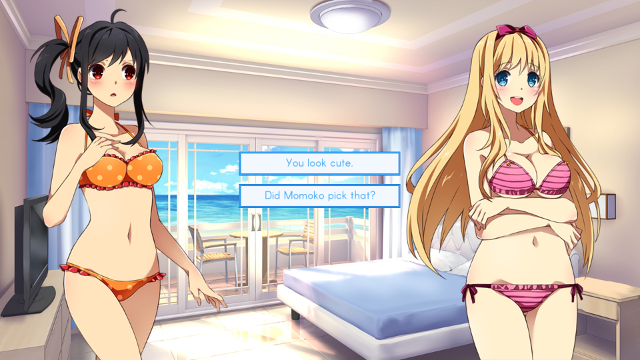 ‘You both look really good,’ Seiji says. ‘I’m sure there’s a nice guy at the beach who will notice you.’ This earns him a few stares of withering contempt. 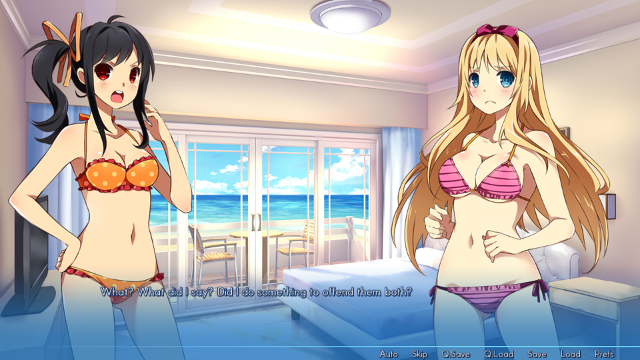 Seiji can’t quite seem to figure out why, because Seiji is apparently not very good at matters of the heart.

And then it’s off to the beach! 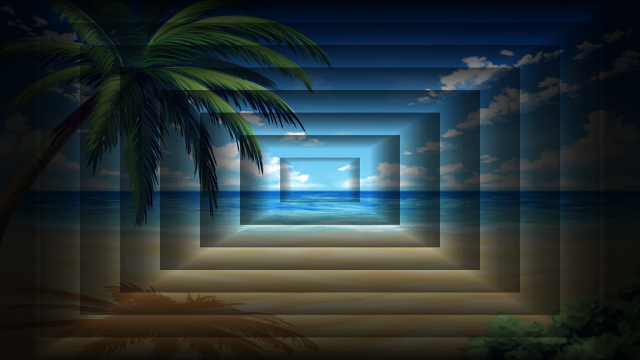 The beach is home to a variety of beach adventures. Seiji wants to build a sand castle! Momoko dives into the ocean! Ayumi can’t swim! Wait, Ayumi can’t swim? Then why did she agree with going on a beach trip adventure? I mean, I understand the value of spending good times with friends. But why not suggest, like… mountain climbing?

Ayumi carefully goes into the water. Ayumi suddenly takes a dive. Ayumi takes a face full of salt sea water and comes up, disappointedly. Ayumi, why did you even do that in the first place? 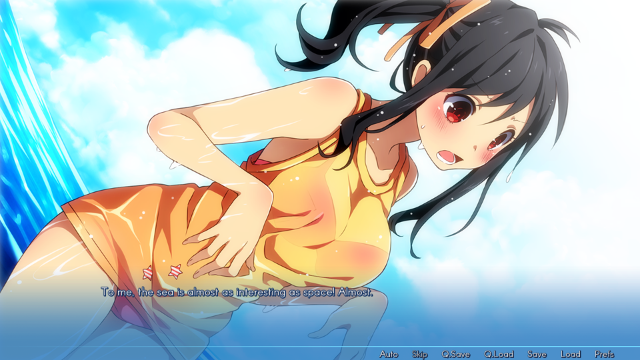 Seiji agrees to teach Ayumi to swim. This gives me flashbacks to Sakura Swim Club, which also included extensive swimming lesson segments. Sure, in that game, it was the girl characters teaching the male protagonist how to swim, while here, it’s the opposite. But still, I appreciate the apparent symmetry. The more swimming lessons, the better. 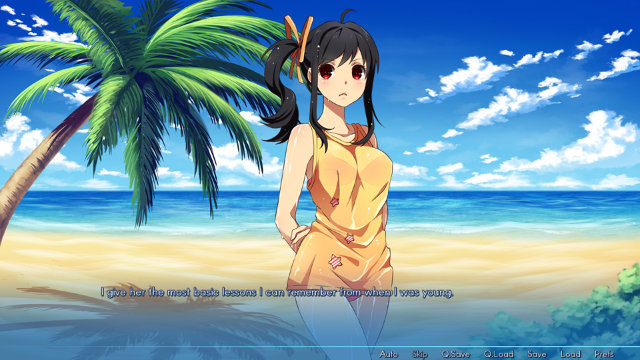 I also appreciate how Ayumi’s wet shirt from the splash graphic transferred to her avatar. That’s the kind of dedication to showing skin that far from all lazy ecchi gallery-VNs get up to.

Beach adventures continue. Seiji takes Ayumi and Momoko to the beach shack, a food place proudly servicing this mostly abandoned stretch of sand. He monologues a little more to himself, about how his friends rarely show faith in him, and how he doesn’t understand why they’re so grumpy at him all the time. This ‘friendship’ is really sounding like quite a thing. I… don’t really get what any of them are getting out of it? Lip service has been paid to the fact that they’ve been pals since childhood. But so far, nothing they’ve been doing seems particularly friend-like. Seiji just wants to daydream about space and hang out on the beach. But Ayumi mocks him for the daydreaming, and Momoko keeps flirting with him in a way that just doesn’t connect. Is he having fun? Are they having fun? 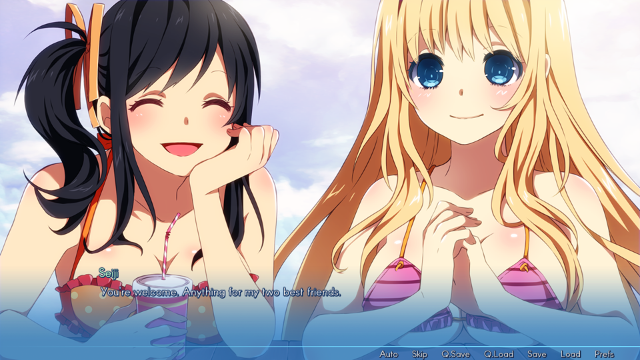 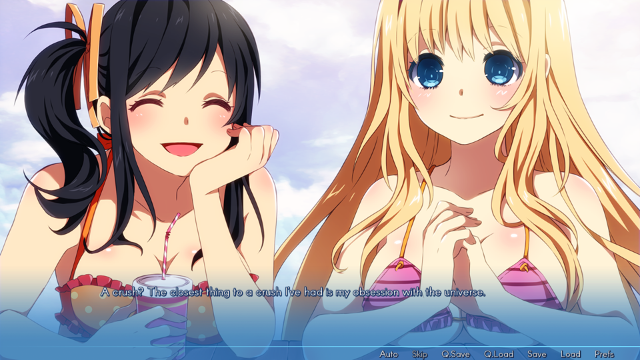 This lasts until the girls start asking Seiji about his girlfriends and crushes. In the most obviously baiting way, too. 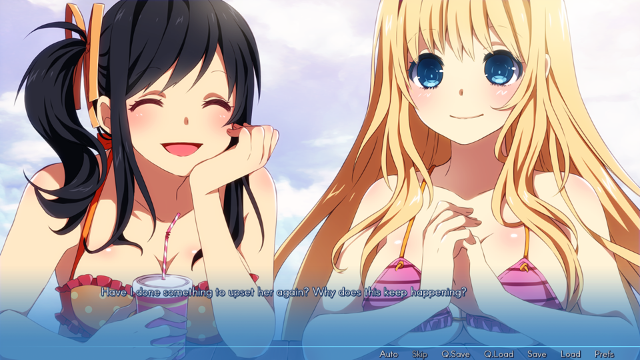 The day ends with the odd trio watching a beautiful sunset on a cliff. It’s actually beautiful; of all the Sakura game background arts I’ve seen so far, I think this one is probably the prettiest. 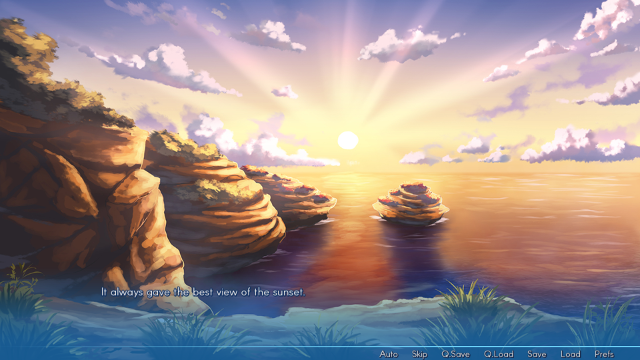 Here, have a view without two bickering swimsuit models in front of it.

Finally, as the day winds to an end, I’m left wondering.

I’m not entirely sure where Sakura Beach‘s story is intending to go from here. I can see parts of it clearly: obviously, both Momoko and Ayumi are in ‘love’ with Seiji, and they’re upset that’s not picking up on that. Ayumi’s being tsundere about it, while Momoko is trying a tactic of overt sexual flirting. So far, Seiji hasn’t connected with that… will he, later on? He didn’t seem too interested, earlier on: his mind was more keen on dreaming about space than it was about noticing the hot women right in front of him.

So maybe that’s what the story’s gonna be? Ayumi and Momoko keep trying to get Seiji to notice them, while he’s occupied with other matters? It feels a little light on interesting content, honestly; how far can you quite go with ‘two girls horning on one boy’? But who knows. It could be interesting. Let’s see if Sakura Beach manages to pull it off.