The second week of my harrowing Sakura Adventure starts with a decided ratcheting down of the supernatural. In Sakura Spirit, time travel brought me to a feudal Japan where fox spirits battled ooze monsters for the affections of an incumbent judo champion. And in Sakura Angels, scantily clad celestial guardians fought shadowy monster, and succubus sorceresses from beyond the veil of history, for the affections of a lazy high school student with absentee parents. Colour me surprised, then, when the next game in the series seems to take place in a mundane high school swim club.

Which forgettable white-bread protagonist will I control this time around? What particular style of anime nonsense plot will he fall into? And what are the unique and quirky attributes of the women that this time will try to win his affections?

Sakura Swim Club‘s title is just as tonally subdued as Sakura Angels‘s was. Just colours and shapes. Whatever happened to bunching up your leading ladies front and center? 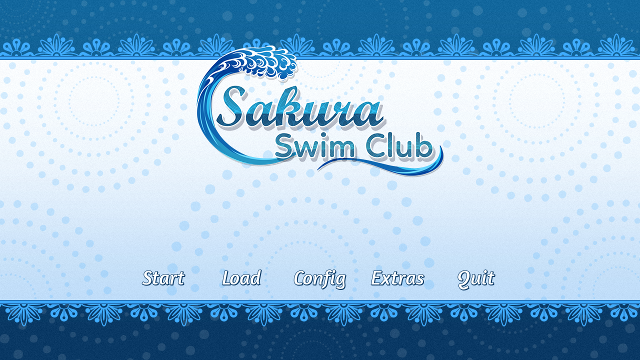 Game, have you convinced yourself that they *aren’t* the main reason we’re doing all this? 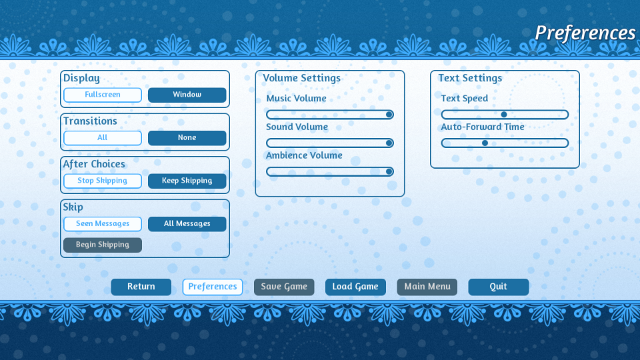 You can see the movement effects in action for yourself by comparing this superfluous options screen with the title shown above!

But I didn’t come here for fancy non-fancy title screens. I came here to read B-grade schlock stories and chew bubble gum, and I brought plenty of gum for the occasion. 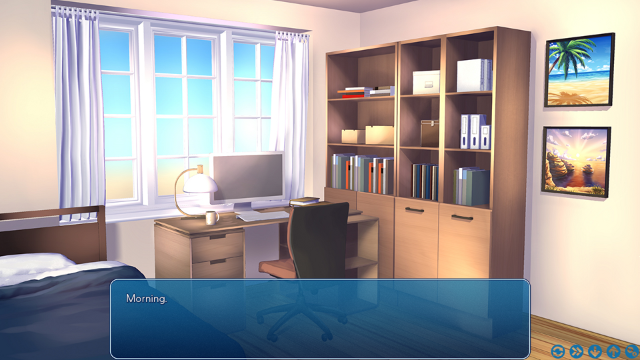 Good morning to you too, game!

Behold! A VN Protagonist Bedroom. Bright pastel colours, limited detail load, and not a speck of dirt or imperfection in sight. A concept artist’s dream, I can only assume.

Let’s see. Computer, desk, coffee mug, books, binders. Small bed. Small room overall, very business-like. From the contextual clues, I deduce that we’re dealing with the High School Student sub-race of VN Protagonists. And it’s a guy, too; I deduce this from the fact that this is a Sakura game.

“Morning,” our protagonist grumbles. “Not my favourite time of the day.” I feel you there, buddy! I’m not a morning person either. You just woke up, you’re still tired, it’s dark and cold outside… but already the world is heaping demands on you. 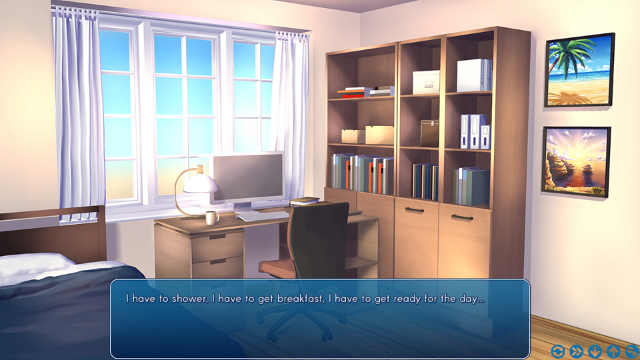 Yeah, see? This guy gets it.

‘Bit by bit’, our protagonist drags himself out of bed. His name is Kaede, I quickly learn. And he’s really not a fan of mornings. 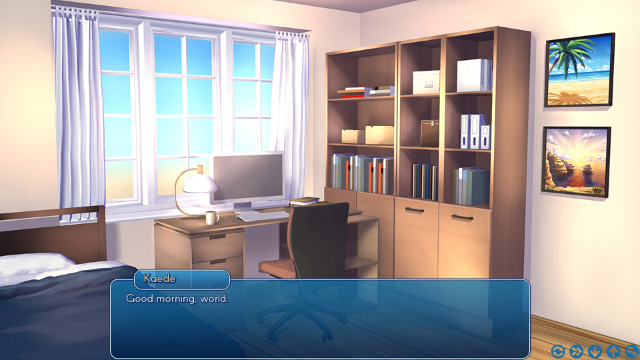 But he sounds so cheerful! 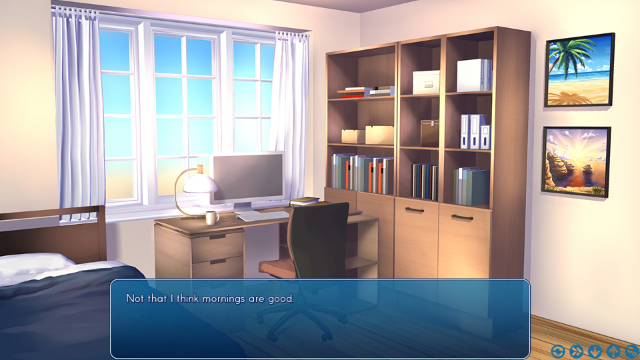 Kaede grumble-exposits a little more. He’s been changing schools a lot, ‘a different school each semester for practically all of school’. That sounds like a lot of schools! Apparently, Kaede’s (traveling) parents send him to different schools over and over in hopes that one of them will ‘spark the family’s gift’. Which I think, surprisingly, is not an oblique magic to wizardry or military tactics or other Sue-tastic shenanigans: it just means everyone else in Kaede’s family is really smart and successful, and they’re expecting him to carry on that legacy. Kaede himself is… less optimistic about his chances. 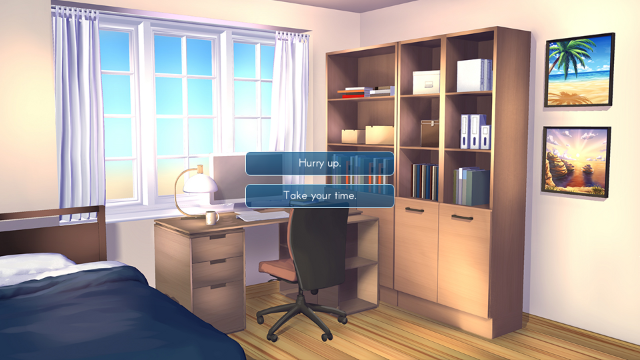 Off to a flying start already.

Rushing to school, Kaede continues his inner monologue. He’s… really not confident about this school. I mean, why would he? I get it on some level: with all the schools he’s already been to, why would this be the one? It’s not an unusual thing to worry about.

But… the more I read, the more I get the sense that there’s more to Kaede than just ‘worrying about his chances’. He’s having a really hard time with this. 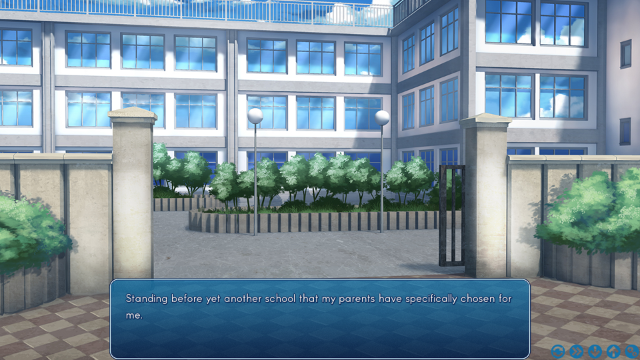 I mean, there is such a thing as casual cynicism, sure. 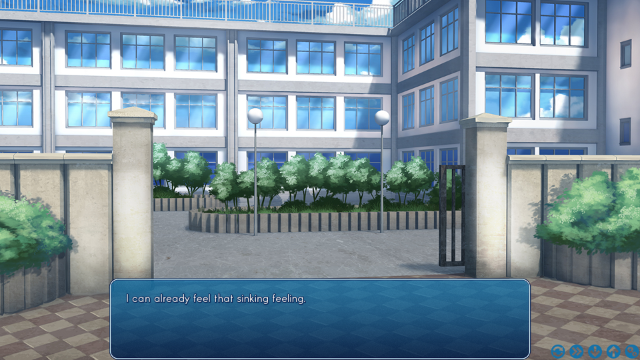 But the level of response Kaede describes here seems to go beyond that? 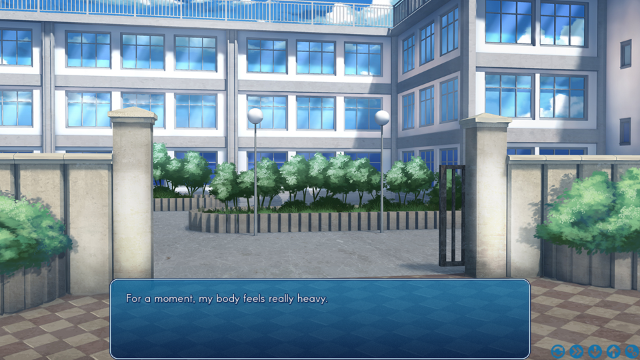 I’ll withhold judgement for now. But something about Kaede’s tone and behaviour resonates with me. Could it be that…

Anyway! Back to class. Or first time into class, as the case turns out to be. It’s Kaede’s first day; the teacher is just about to introduce him.

Kaede isn’t feeling super hyped about that, either. 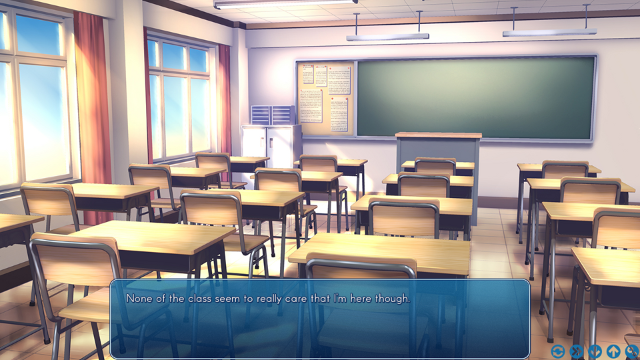 Oh, Kaede. Now you’re just being over-harsh on yourself. 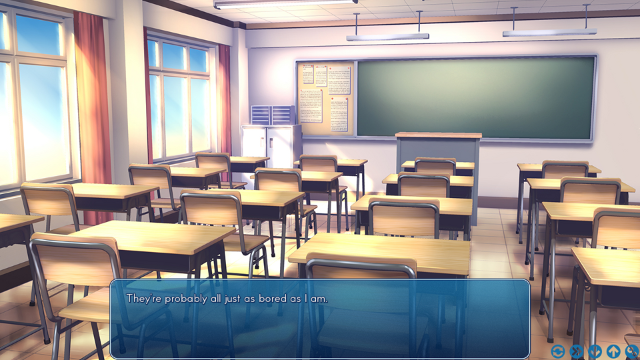 This is probably right on the money, though.

“Kaede, anything you’d like to tell us about yourself?”

Okay. This is all relatively bleak so far. But this is still a Sakura game, right? So I know what’s gonna happen next. Kaede’s going to sit in class, and spot some interesting girl or another. And then it’s gonna turn out that she’s, I don’t know, a dimension-hopping spellcaster or whatever. Planeswalker by way of Scott Bakula, sure, we can make that work. And then: hilarity ensues.

Except… no, that doesn’t happen. Kaede sits in class alright, but then the regular class day just picks up. And Kaede immediately struggles to keep with it. 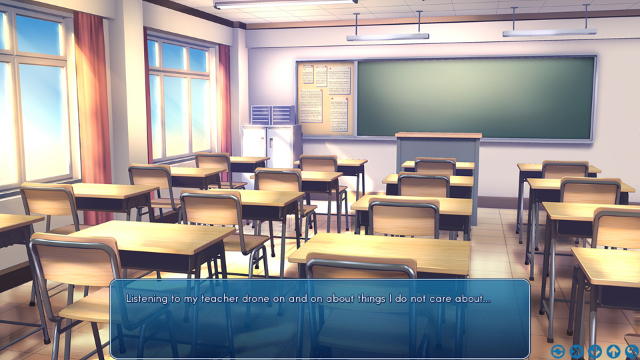 Not in the sense that it’s ‘too difficult’ for him… 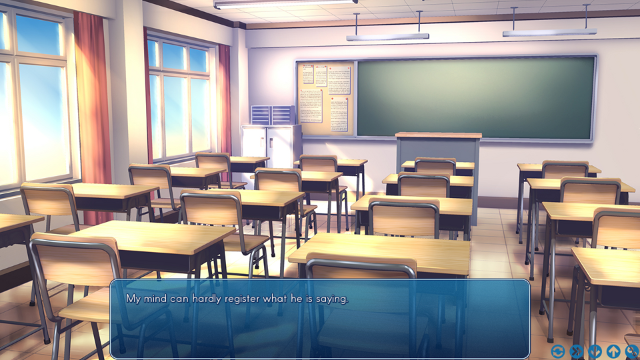 …but more in the sense that it’s hard for Kaede to pay attention to things he doesn’t care about. 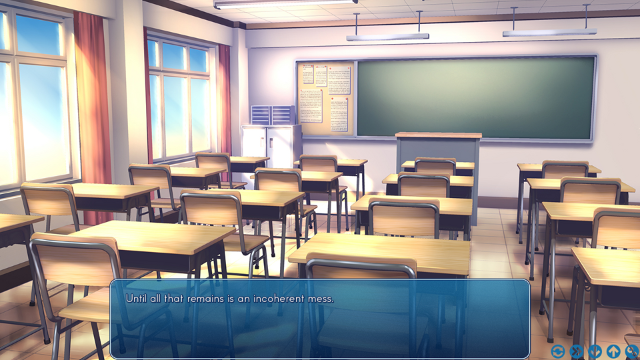 And then his brain just checks out. Whether he wants it to or not.

I have the uncomfortable feeling that I’m watching the daily routine of a depressed man.

Or maybe not ‘daily’. But Kaede makes it very clear that he’s been through this song and dance before. His parents pick a new school for him, he moves to accommodate, and then it just… doesn’t work out. His interest levels plummet, he can’t force himself to pay attention, he doesn’t make any friends, and he barely scrapes by on minimal passing grades. Up until the point where his parents decide that ‘this school isn’t working either’, and they pick a new one. Rinse, repeat, no improvement.

Kaede’s parents have even ‘informed’ the teachers of all this. So the current teacher knows to pay attention to Kaede’s lack of interest, and — presumably — scold him for it. 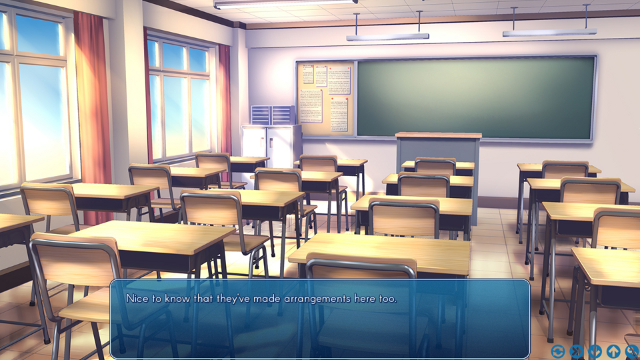 Teacher suggests joining an afterschool club as a motivator. Like chess, or running, or… no, not swimming. Forget he even mentioned swimming. You wouldn’t want to join the swimming club. 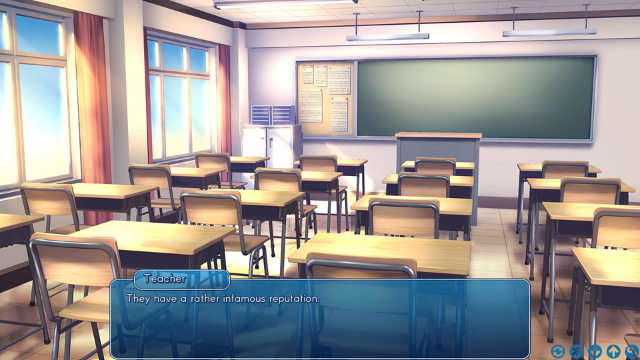 In the hallways, Kaede mulls over the idea. Joining a club? It might be nice… if only to stave off classroom boredom. He’s mulling over the idea so hard, in fact, that walking into the student right in front of him comes as a total surprise. 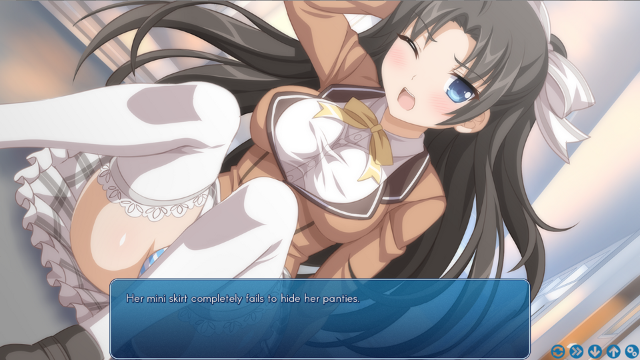 There’s some yelling, some recrimination, some belated embarrassment, and even some wacky background music. Horns and slide whistles are involved. And then Kaede’s alone again. Well, that was a weird intermission. Anyway, back to the main story!

The idea of the swim club won’t leave Kaede’s mind. It really sticks with him, for some reason. None of the other clubs sound interesting in the slightest. So in spite of — or maybe because of — the club’s strange ‘reputation’, he decides to seek it out. 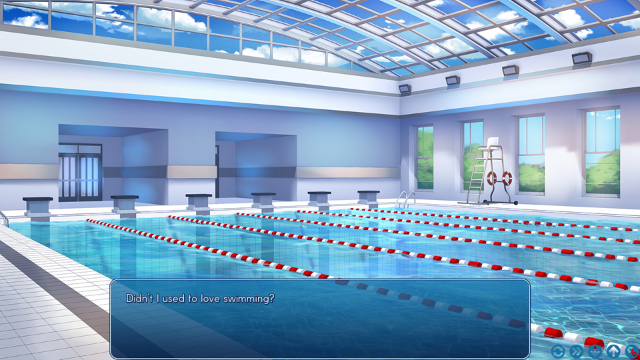 You laugh, but I’ve forgotten about more things I used to like than I care to admit.

This is a pretty fancy pool, to be honest. Large, well-kept, bright. Why do Japanese pools always have these open sun-roofs, anyway?

And then, just as Kaede starts leaving, two girls emerge from the water. With… what appears to be half a functioning swimsuit between them. 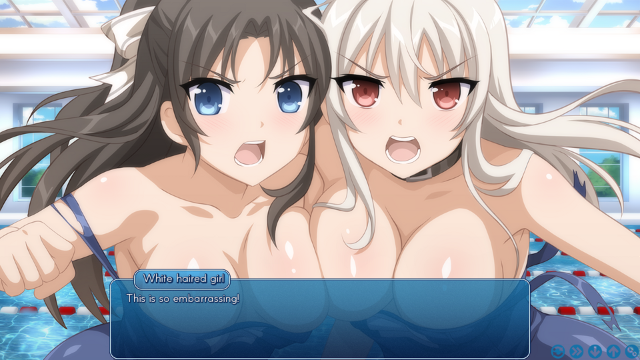 I don’t know yet what their names are, but I’ve decided to call them… 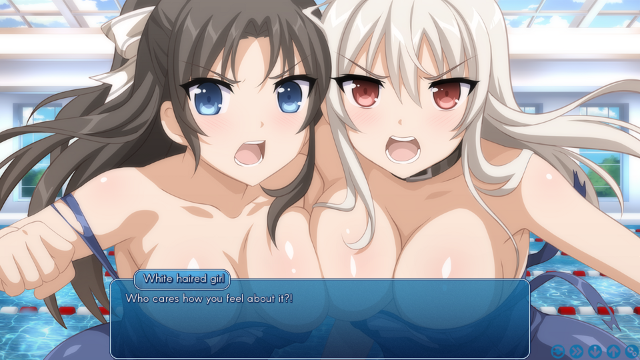 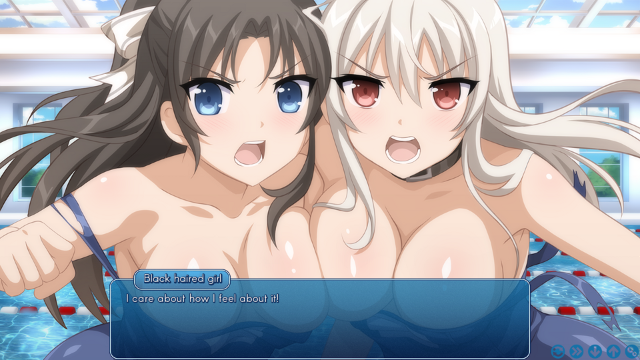 It transpires that the two women before me — now wearing actual uniforms — are the only two members of the swim club. Mieko and Hiromi, they’re called. And yes, Mieko is the same black-haired blue-eyed girl Kaede ran into a few paragraphs earlier. So that’s going to make for some awkward small-talk.

Kaede wants to join the swim club. Mieko is opposed, and Hiromi is guarded… but really, what choice do they have? There’s nobody else at these tryouts. And to hear Hiromi tell it, they really need new members.

And so, the swim club is joined. And for the first time since I’ve met Kaede, he’s actually really excited about something. 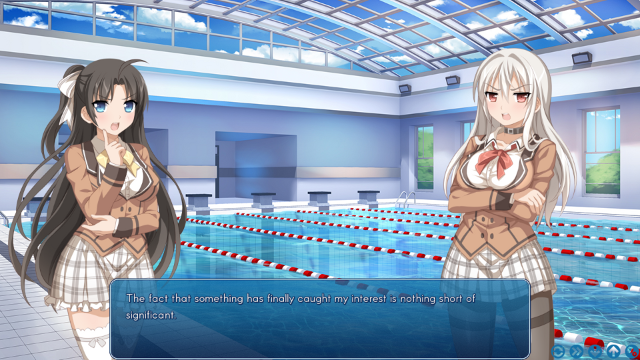 No, but for real: I’m honestly pretty interested in seeing where this story goes from here. Sakura-brand buffoonery aside, Sakura Swim Club has actually been fairly well-written so far. And unless I’m really projecting, the main topic it’s trying to address is…

Well, let’s just say: I’m curious if Sakura Swim Club can make good on what I think it’s promising right now. And I want to see where this story ends up.

See you on the other side of the pool!