You know you’ve made it in the illustrious world of independent game reviewing when developers start sending you games, just to get some cool time in the Indie Wonderland spotlight. That’s what happened a with Expand, a game about ‘meditative exploration through a shifting circular labyrinth’. The brainchild of Chris Johnson and Chris Larkin, the former sent a Steam key and an invitation to review two weeks ago to me and only me; this is definitely what happened, me being the only recipient, rather than this being some sort of larger press outreach program. I mean, my name was on the email! Check and mate, disbelievers.

“Controller and Headphones are highly recommended”? Well joke’s on you, Expand, that’s how I play most of my games anyway.

In the black screen that remains after the ‘control’ and ‘autosave’ messages fade, shapes start springing into existence. A white circle, inside a larger white circle. A pink cube. A curved white line. 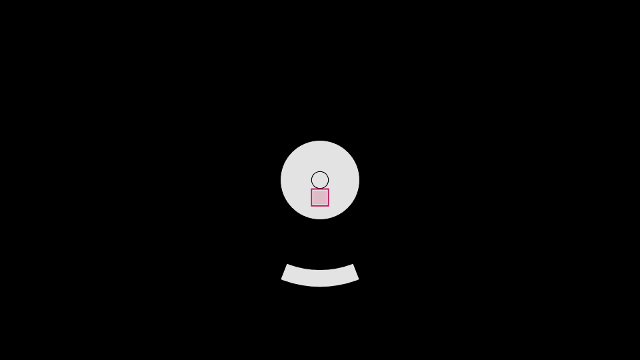 Disproving my ‘black and white’ theory more or less from moment 1.

Music starts up in the background. Is that a… violin? This silly little labyrinth game is going to have orchestral backing? I probably shouldn’t be too surprised at that, given that Chris Larkin is an award-winning composer and sound designer. But there you have it.

Then, with musical accompaniment in place, the on-screen shapes start changing. Whiteness flows from the bottom of the larger circle, forming a jagged triangular path to the lower line. Then the path flows upwards, collaring the original circle, as new curved lines spring into existence below. And as white and grey and black letters fade into view, the originally modest selection of shapes finished expanding into a proper title screen. 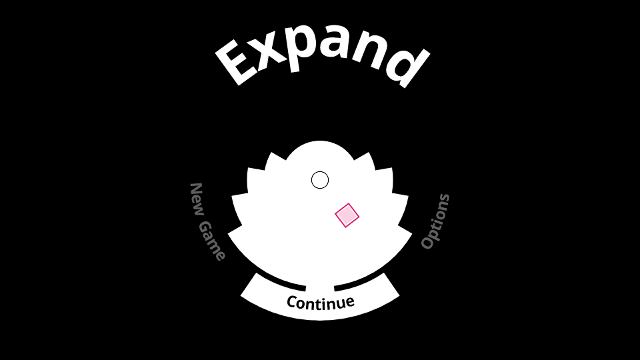 How do I do anything here?

Oh, okay. Pushing the analog stick moves the pink cube around. That little dude’s me, then? When I try the keyboard controls, movement takes a bit of getting used to at first; rather than being strictly cardinal, the cube’s movement is determined by the center circle. Left and right orbits around the center, and up and down increases and decreases distance to the center, respectively. It’s tricky to get a hold of, and feels weird. In contrast, the controller’s analog stick movements just map to the cube movements directly. Up, down, left, right, as you’d expect. Less fancy and interesting, to be sure… but also less confusing, so I’ll let that slide. Plus, even with the controller, the orbiting movement metaphor is still intact.

I move around the center area for a few seconds, learning that I can only traverse the white, hunting for something to do. How do I… But the general idea becomes clear enough when I move into the Continue box on the bottom. Because when I do, Expand quickly carves new pathways through the black wall. Very dynamic-like; fancy! 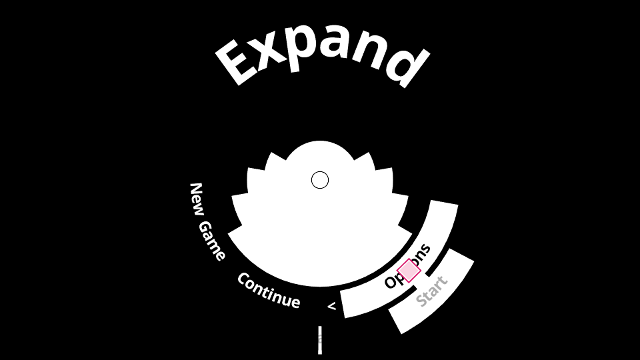 And when I move to the Options box, *another* new path is cut open!

I move into Options, then Start. The walls shrink around the Start box, trapping me in a small white space, as every other bit of white space on-screen simply… disappears. Soon enough the whole screen is black, save for my little white island and the central white orb.

And that’s when things get really fancy. The white box containing me swivels down to the center of the screen. And then, before my eyes, a whole new set of shapes and passages is cut through the blackness! 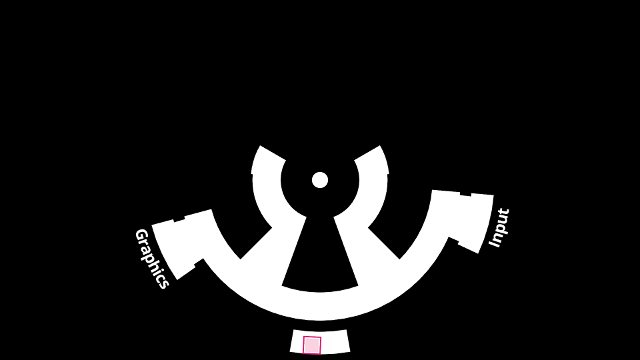 And yeah, as you probably guessed already… 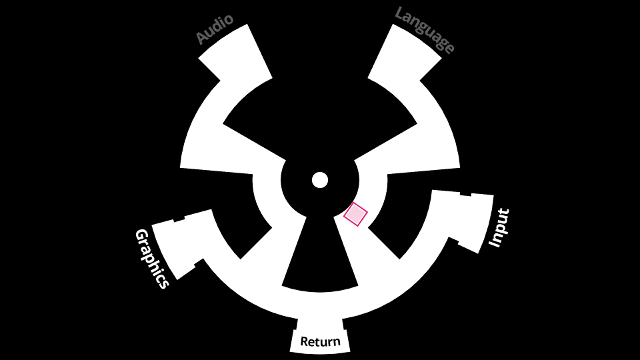 …this new ‘space’ is the Options screen.

On the one hand, this is pretty fancy. I definitely went ‘ooh’ for a moment there.

On the other hand… cube-me’s default speed is not very high. And now I have to rotate-steer it through hallway after hallway, and wait for a three-second screen transition, every time I want to change any of the options.

And there are options. I’d totally have accepted a game like Expand to try and get away with a bare-acceptable-minimum set; you know, audio levels and resolution and that’s it. But nope. 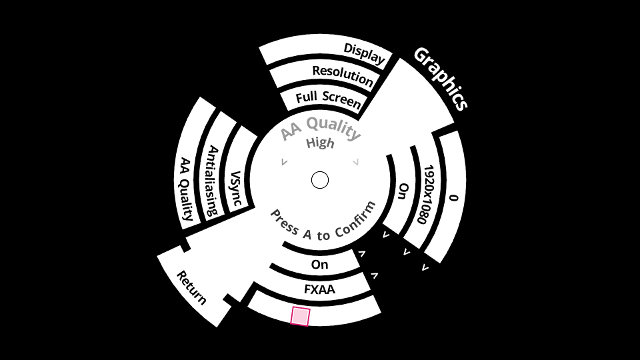 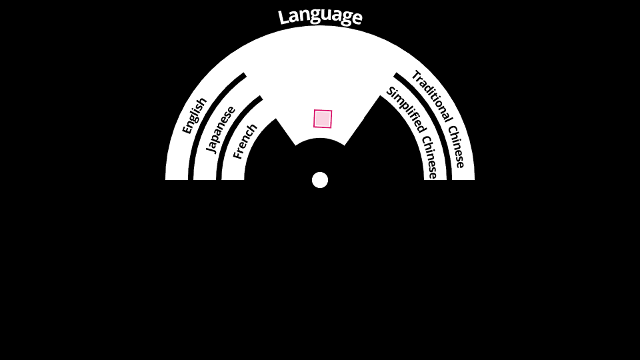 It even has a level of language support that puts plenty AAA games to shame.

It’s a really good selection of options! I just wish it didn’t take me half an hour to scout through all of them. Though, looking on the bright side, any earlier confusion I may have had about how to control this cube has more or less evaporated. It’s like a controls tutorial folded into a quirky Options screen, and I’d give Expand more credit for the idea if I honestly thought that was intentional.

Options frippery aside, there’s really not all that much to do on this title screen. So let’s head over to New Game, hit Start…

…get teleported into a fancy Save Slot Select screen, complete with inwards-waterfall-of-blocks animation effect… 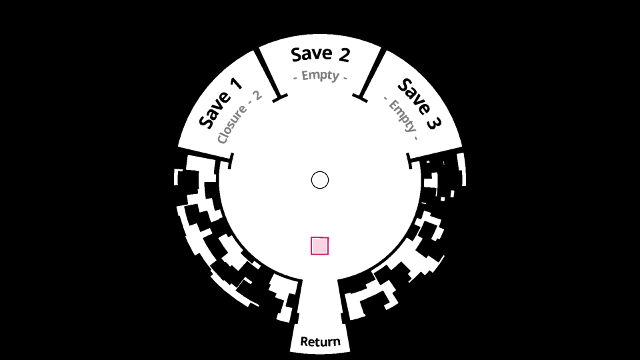 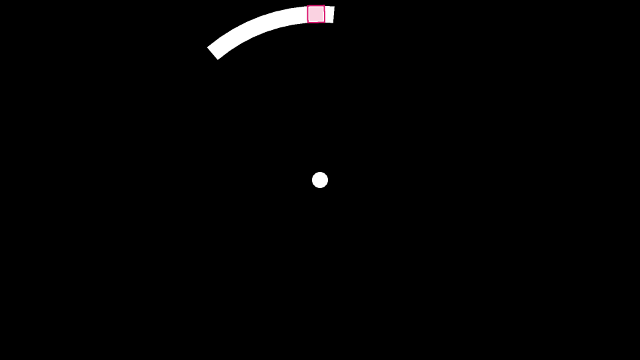 For a few seconds, I appear stuck in the dark nothing. The violin fades, replaced with subtle piano notes. And as they play, the level… changes.

“Follow me,” a line at the end of my hallway says, and I do. And as I move to the left, a new path opens up. Down, then right again. 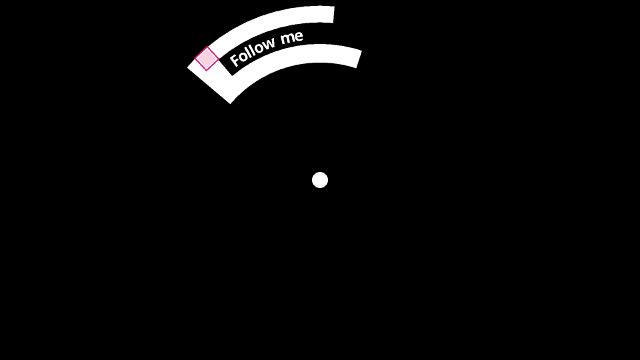 This would have been much more *surprising* if the Options screen hadn’t already taught me the basic metaphor.

To the right, a large room that goes core-ward, or ‘down’. Further to the right, another room. Up, and down, and up, and down… And every time I move into a new area, the areas behind me fill up with darkness and close off forever. 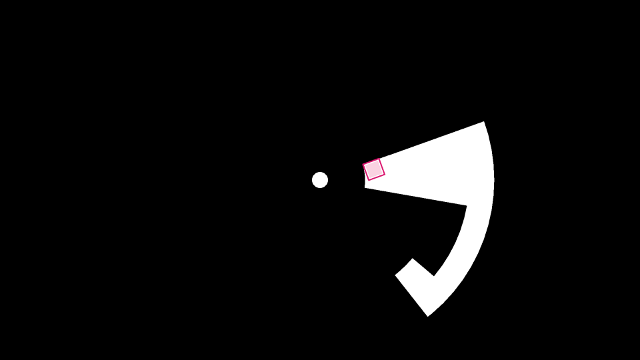 You know what they say: you can never go back home.

It makes sense, in a way. With the size of the cube as a limiting element, there’s really only so much level you could fit into one circle. But as I travel around the core, it quickly becomes obvious that the old hallways I knew have been ditched for new developments. 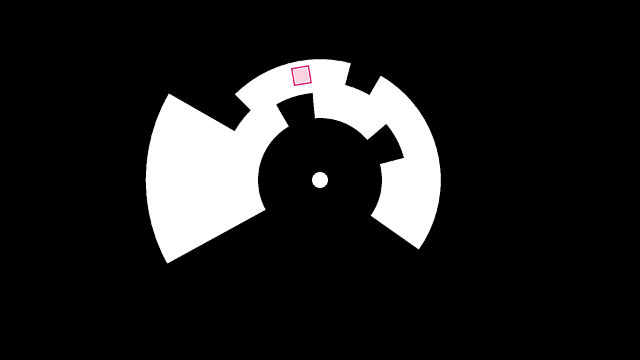 There’s a joke about gentrification in here somewhere, I’m sure of it.

I complete one, two, three clockwise laps around the core, taking in new shifting sights and enjoying the music. And then Expand starts shifting into higher gear. “Against the tide,” I’m told, and then suddenly there’s movement in the next hallway. Black blocks move counterclockwise, appearing on the right wall and sinking into the left and generally blocking my attempts to get anywhere fast. Ah, like so! I see what you’re trying to get at, Expand. 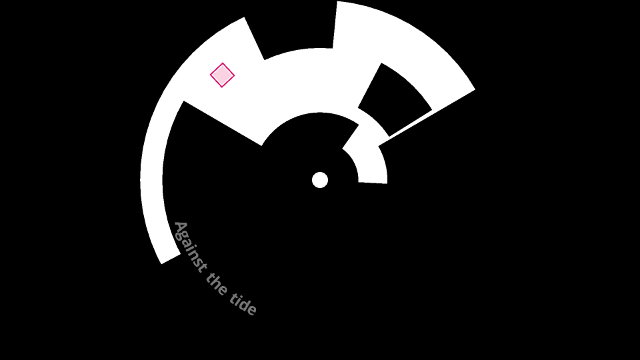 *Active obstruction*. The stakes, I consider them: RAISED.

The next few laps around the core are characterized by this new motion mechanic. Moving blocks appear everywhere; not just clockwise and counterclockwise, but also up and down. They dynamically open and close new paths before sinking back into the inscrutable blackness of their origin. And I’m pretty into it. It’s simple on the surface, but something about the combination of precision timing movement and simple black-white geometric block puzzles makes it work.

And it’s not like it’s always easy, too. More than once, I get caught out by an unexpected rising platform or a timing puzzle that I misjudged. When that happens, Expand‘s white colours fade to grey for a moment… and then time rewinds, and the puzzle is reset to the last safe place I was in. 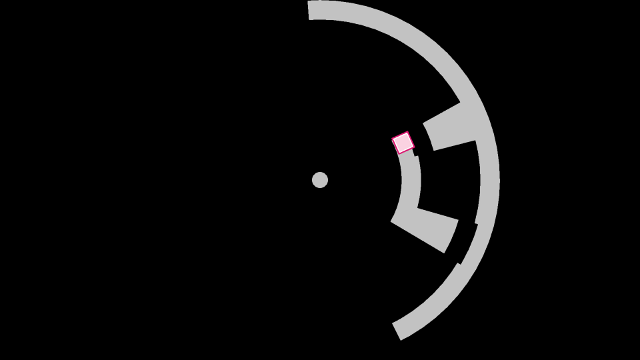 Well, not exactly the same. The entire level rotates to the side a little. It’s still the same thing, just… different. 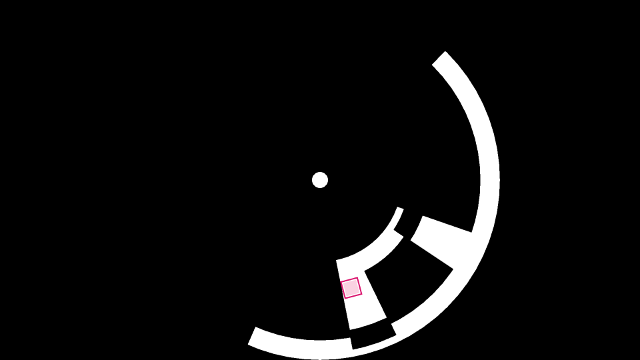 “You will never again do this puzzle the way it was originally intended! THIS IS THE PRICE OF YOUR FAILURE!”

I run laps for a few minutes, learning the ins and outs of this new world. Traveling blocks, appearing platforms… passages that open up unexpectedly, or just-in-time… Sometimes the puzzle isn’t so much avoiding lethal collisions as it is knowing where to go: sometimes the old paths make way for the new paths automatically, but sometimes, a specific triggering point is needed.

For most of the puzzles, the colour division is clear: white is open space, black is walls. That’s the visual metaphor I find myself applying, anyway. But it doesn’t always work that way. Sometimes, it’s the white that moves, islands of existence and possibility amid a sea of nope. 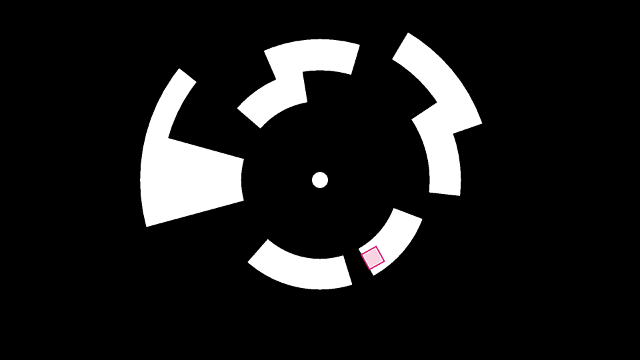 Yeah, this is essentially how the menus work, too. But in the context of the last ten minutes of play, it’s an interesting new approach. 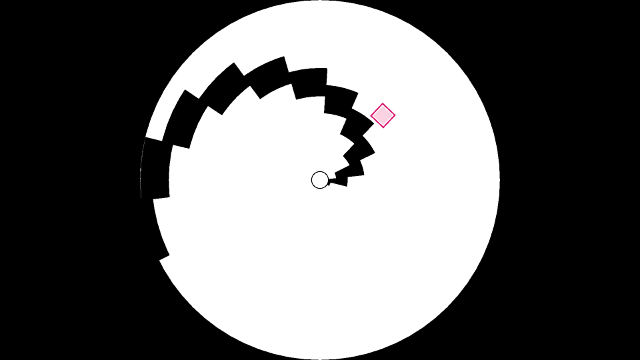 And then, all of a sudden, I’m… somewhere else. 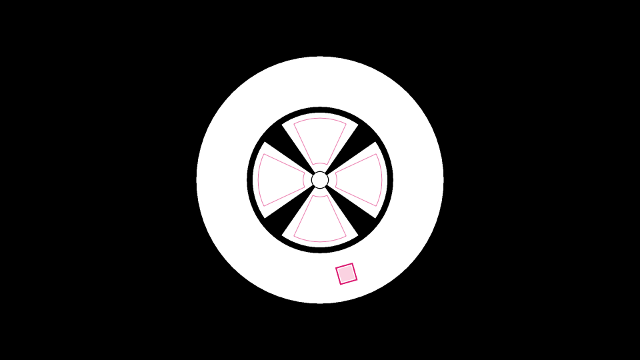 Hey, look. More of my colour! 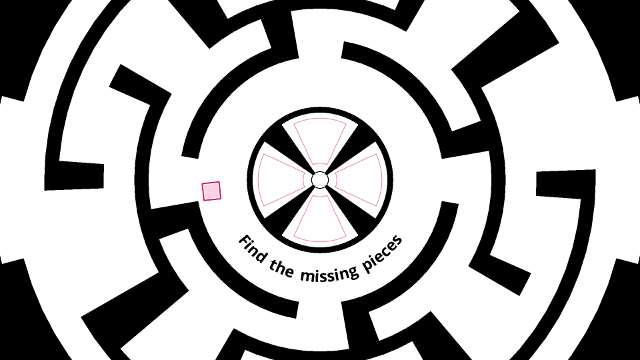 Since when is there more white to this world than black?

Well, this is new. I guess I can actually move away from the central core now, then? I take some cautious moves to the right, and… 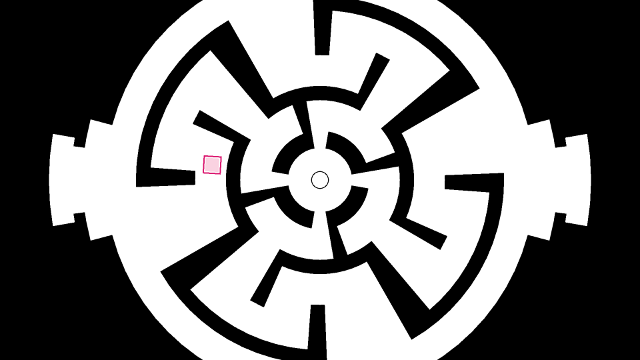 It shrunk! I moved away from the center, and instead of actually moving away, the map just… shrunk, I guess.

Except, no, it didn’t ‘just shrink’. It zoomed out. I’m not just moving ‘to and from the core’, I’m actually moving up or down. Whenever I move towards the core, the center area enlarges and zooms in; whenever I move away, it shrinks and zooms out. Up to a point, at least.

Well. This is interesting, and neat. Wonder why that didn’t come up before? Purposefully, no doubt… maybe that’s the reason all those levels were so bordered off?

Anyway, regardless. Where do I go from here?

At the toppest of the top level, the world resolves into a circular mini-maze with four exits. Up, down, right, and left. And I choose… left, I guess. I move in, and the world shifts once again.

I travel through a simple map with one clear exit and two seeming side paths, and end up… 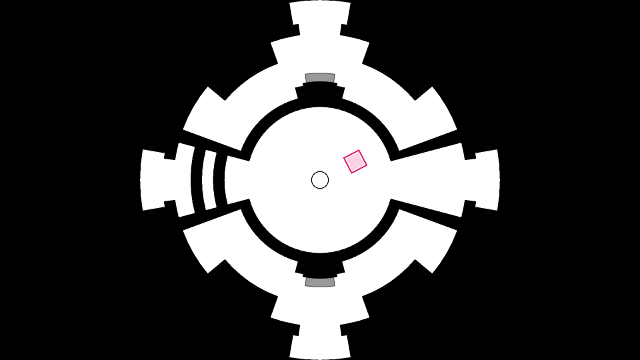 Again, this is new. There’s buttons now? Buttons that I can’t seem to get to, either. I mean, the previous map I was on had the three exits, I did see that. But I left that place! And so far, I’ve never seen any indication that I can ever go back to a place I left. Isn’t that the whole point of the rotating changing level structure?

It turns out that it’s actually not! Apparently, the areas I’m currently in work much more like traditional map screens: while traversing them still involves the screen wiping and my cube being shifted up and down, they actually keep a consistent look and sensible internal layout. This map is to the left of this one, and this one is to the top right, so if I go from there, to there, I should end up… hey, whaddaya know, that actually works.

In the two side paths, I solve one button puzzle each. One even has a timer! 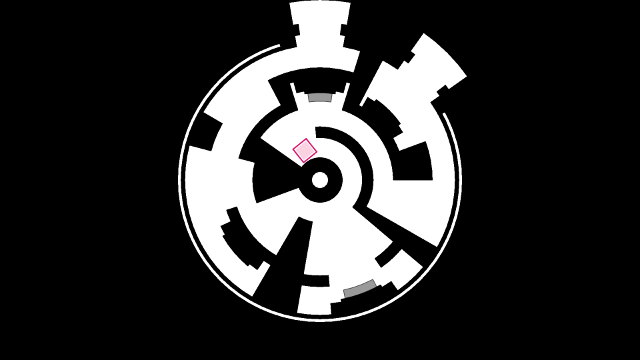 See if you can spot it.

Each side path opens up to the main room, where the previously-unreachable button now removes one of the main path’s barriers. And it isn’t until long that my progression opens up.

And then I find myself in… 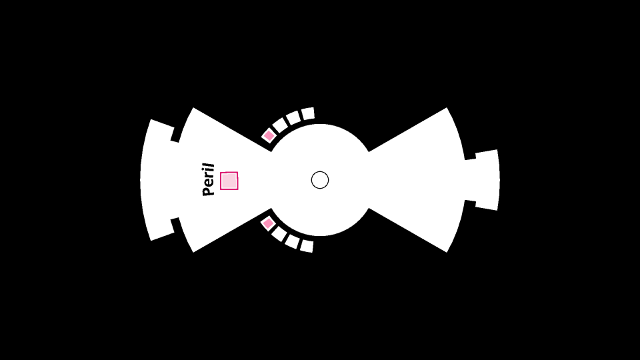 Well. I’d say that can’t be good, but at least it’s progress, right? There’s even a pink cube in the walls here! So I’m pretty certain that going this way is a great plan, and that it will in no way backfire horribly.

After all, what can Expand even realistically do? Throw more smashy black blocks at me? Face it, game: I’ve seen the worst your white-grey-and-black world has to throw at me, and I was sufficiently unimpressed to worry. Whatever ‘peril’ you think you have for me, bring it. 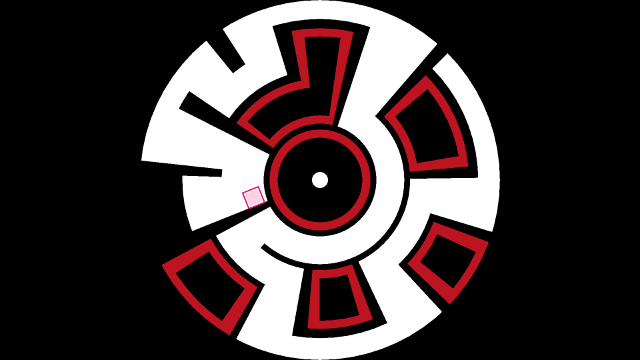 Wait, hold on. What? That’s not fair.

I touch one. I die immediately. Yeah, I think I might’ve started bragging a little too early here. 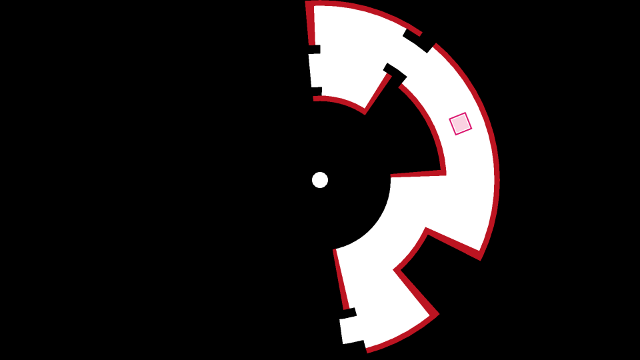 I’m like 74% sure I’m gonna regret being all boisterous.

Lemme see if I can just… get through this, okay. Meet you guys on the other side!