Hey, you all remember Worms? The game you and your friends played decades ago where you’d take turns hopping around as a worm and shooting other worms with deadly and explosive weapons? Of course you do. What a fun game that was! I remember spending multiple days on end with a good friend of mine, creating custom match types and playing over and over, toying with all the different weapons and abilities and seeing what hilarious and even intense shenanigans would occur.

I played the latest Worms game a few years ago with some friends and what I found was depressing — the old formula I loved had aged like milk. A 30 to 60 second turn for each person used to be a nail-biting experience wondering what would go wrong or who would explode next, but now it’s a long time to wait for one unit to attack another, or more likely, to miss and hit itself or nothing. What used to be almost nonstop laughter now feels like dragging out a relatively straightforward battle into a tortured process of trying to shoot and then trying to hide, which isn’t helped by the now-awkward control scheme that hasn’t been sufficiently tweaked in its various iterations.

What I’m trying to say is that Worms as a franchise is utterly obsolete. Gaming has come such a long way that the old clown is no longer fun or funny. But the Worms dynamic — the premise of a couch party game appealing via cartoon-violence slapstick comedy with cute little animals shooting each other — is not obsolete at all. In many ways, its legacy lives on in this summer’s Steam hit Duck Game. 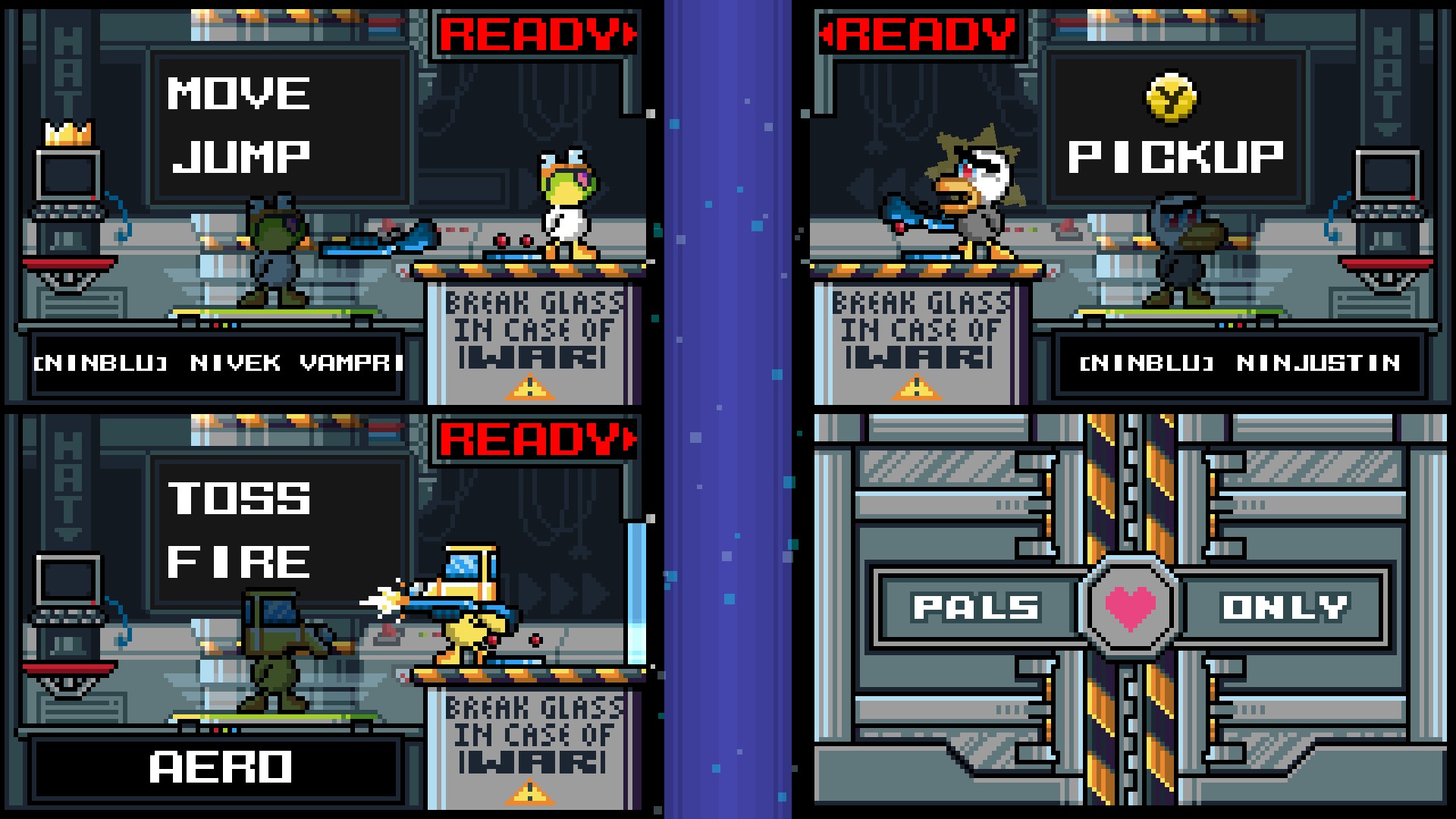 That feels weird to say because in terms of its low-level play mechanics, Duck Game is almost diametrically opposed to Worms. Instead of taking minute-long turns to slowly kill each of each other’s units, you jump into a level with one duck, grab the closest weapon lying around and frantically shoot your friends. No HP bars exist in this world — everything is insta-kill. A level can end in 10 seconds, and it rarely goes on longer than a minute. And Worms’s weirdly finicky and frustrating jumping is traded for a smooth, standard platforming control scheme that has more in common with Towerfall or Super Smash Bros.

Towerfall feels like the most apt comparison, until you consider that Towerfall gives minimal variety of weapons and abilities in order to convey a highly skillful and balanced combat system, while Duck Game has a plethora of wildly different weapons and shuffles through a long list of levels ranging from symmetrical and balanced to absurd and one-note. Its rapid-fire approach to rounds and levels gives the game a sense of constant dynamism that’s very conducive to couch party game fun. It doesn’t tend to feel frustrating when you play a level that seems unfair or gimmicky, because that level will probably be over in 20 seconds and whatever happens will probably be funny.

This might sound like a shtick that gets old quickly, but it really doesn’t. That’s because there’s a remarkable amount of depth to the movement and weapons. Bullets fire as rapid projectiles rather than hitscan, and different guns actually have different bullet movement speeds, in addition to varying accuracy, spread, and so on. That’s pretty standard for shooters, but more depth comes from the movement mechanics.

I love freedom of movement in games — that’s why I enjoy platformers so much — and I was very impressed by how the weapons can actually allow you to move in creative ways. The game lets you slide, but revving a chainsaw while sliding makes you dart across the ground at ludicrous speeds. You can hit a wall with your chainsaw as you jump up and the impact will make you bounce upward to reach higher places. You can fire an AK-47 while jumping and the recoil will make you fly backward. The jetpack lets you dash upward, but if you put yourself in the sliding position while jetpacking you’ll dash in the opposite direction.

Admittedly you won’t notice a lot of these little creative twists when shooting your friends, but the game also has a wide variety of single-player “arcade challenges” that bring these to the forefront and have medals from bronze to platinum for each. Performing well lets you unlock game modifiers (such as “infinite ammo” or “live grenade upon death”) as well as more hats, which, as far as multiplayer features go, are pretty fucking important. 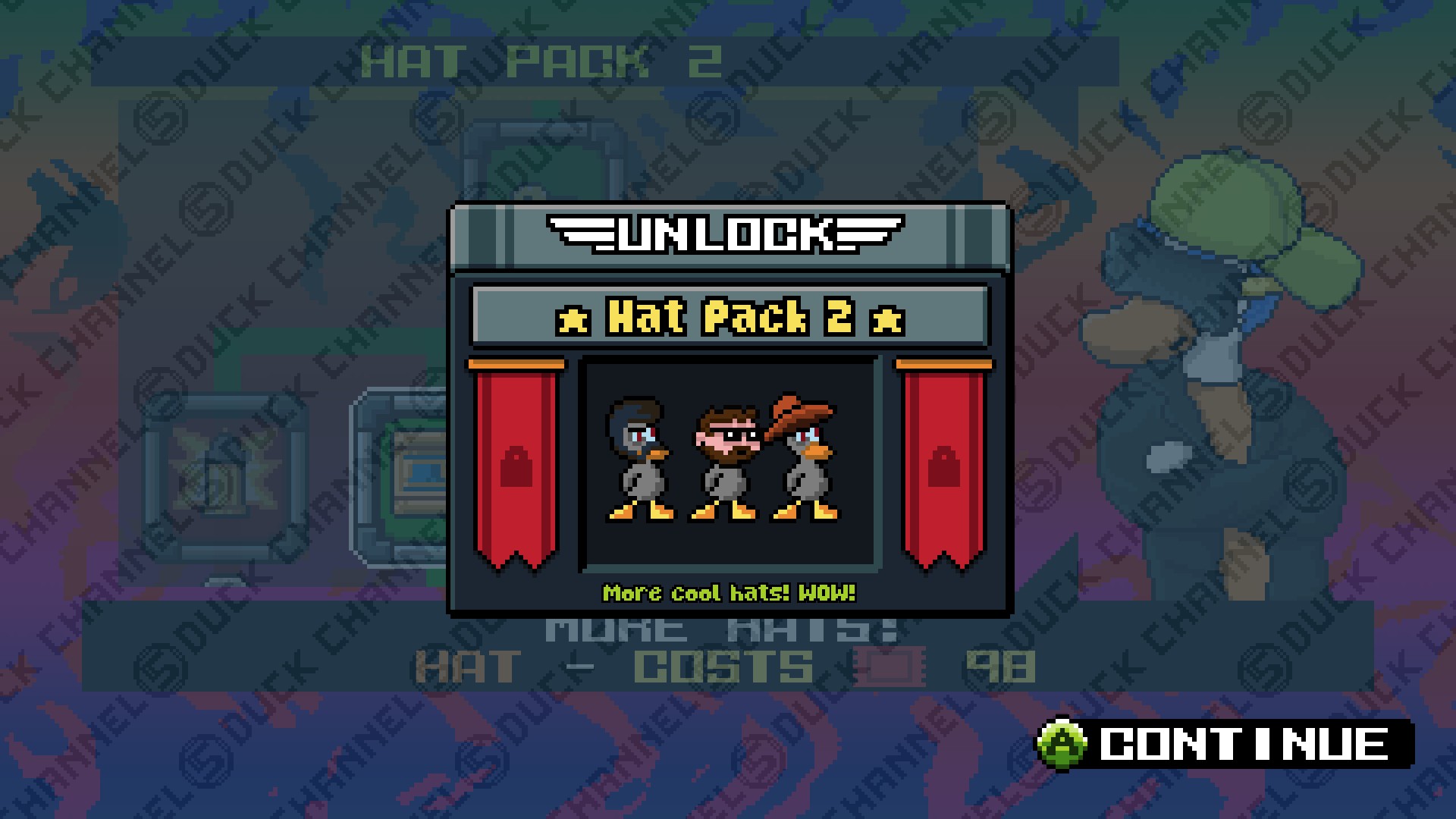 Oh, and users of the Steam Workshop have already made a great deal of CUSTOM hats, too! 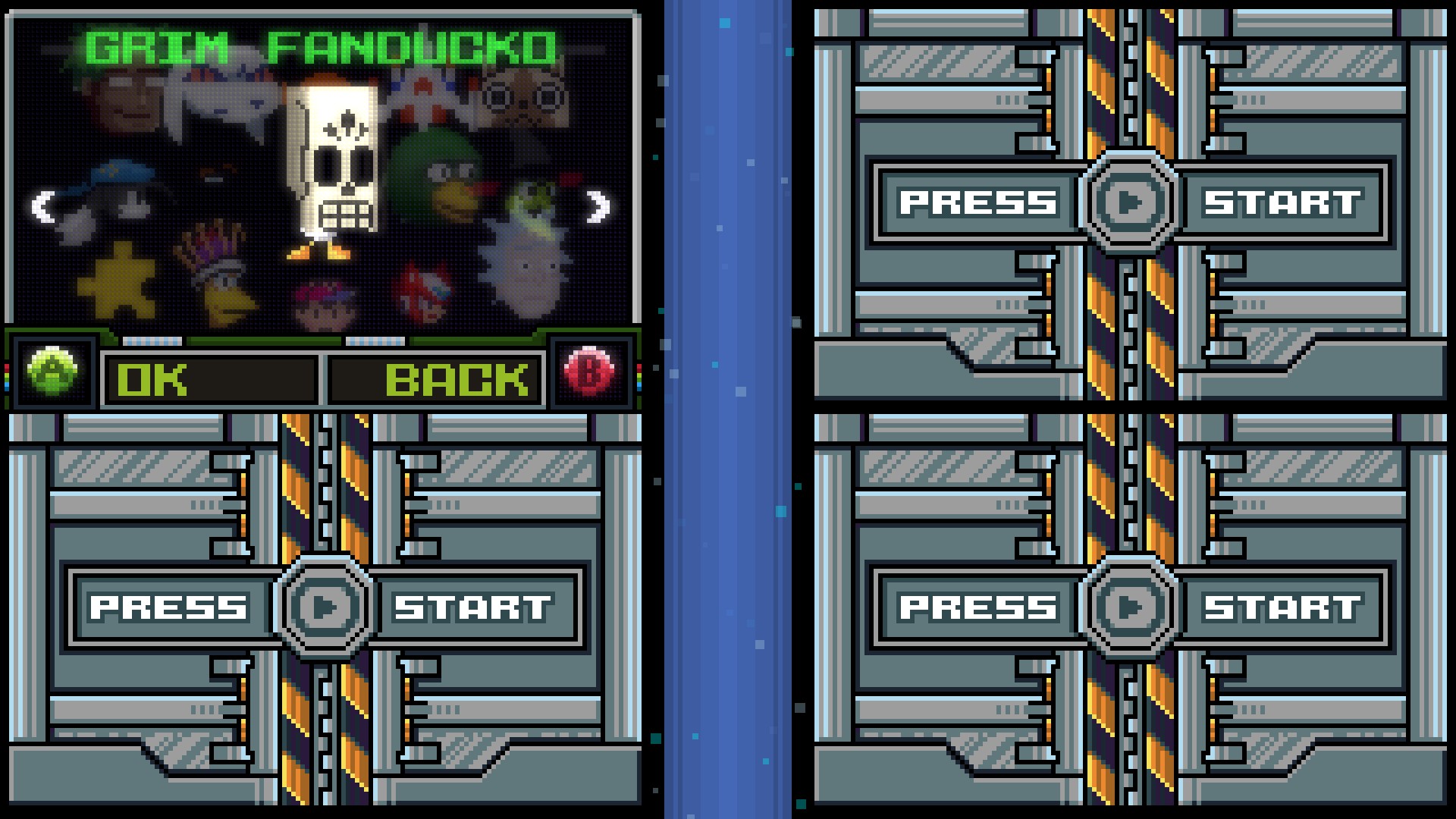 Despite it clearly being made for local multiplayer, it does have an online mode, and it can be almost as fun, provided you’re playing with friends and hanging out with them on a voice chat client. I tried playing with randos, and a lot of the humor is replaced with frustration when you can’t laugh off an absurd death with the friend who was responsible for it. On top of that, many online players are obsessed with winning, and thus will hole themselves up in corners or behind doors and wait for you to walk in so they can shoot you. This is an unfortunately effective tactic that can facilitate consistent wins, while dispensing the fast-paced fun of the game.

And lastly, there’s a fairly easy-to-use level editor. Now, I’ve always had a fascination with level design, even when playing Warcraft 2 and Starcraft as a wee child. Putting interactive pieces together and making them bounce off each other in interesting ways is a wonderful creative avenue for a gaming enthusiast. I loved toying with those map editors, even though I never made anything good with them. Until now, though, I’ve never shared levels in any game publicly because of a fear that they’d be seen as either too bland or too gimmicky.

Duck Game, though, feels like a perfect game for a budding level designer. The levels are expected to be quick and silly, and there are loads of different tools that can interact fascinatingly. While playing I’d think to myself, “So when a sword is thrown and you touch it in mid-air you die — if swords spawned above bounce pads would you have to dodge them?” And I went into the editor and tried it, and the answer is yes, and I made a level out of it. 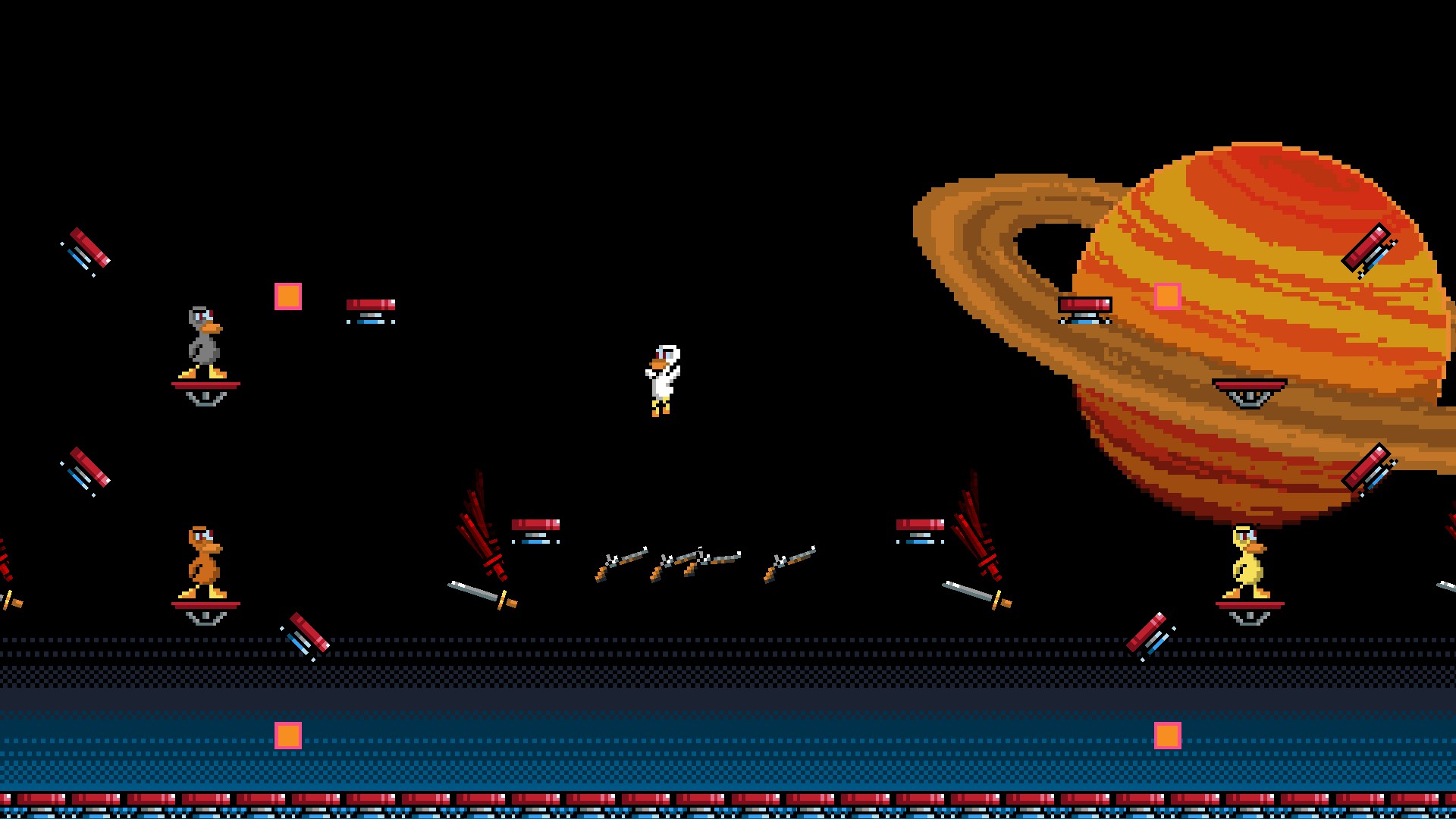 I’ve published three levels thus far and I feel like I’m just getting started. If you have Duck Game on Steam and want to try my levels out, here’s where you’ll find them all.

And if you don’t own Duck Game on Steam yet, you can buy it here.