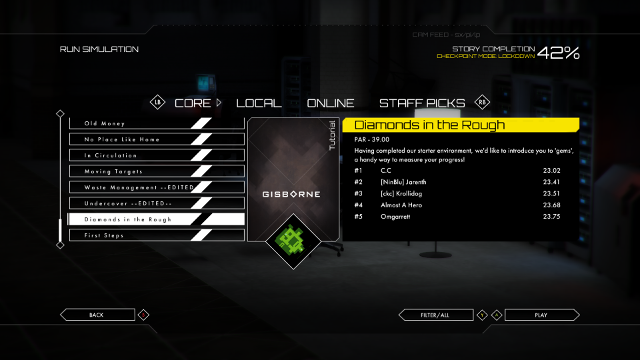 I’d have played further, but I was too busy becoming world championship contender at the tutorial levels.

I figured some things out in my forty-two percent playthrough! I figured out things about the world, about Alan, about my reasons for virtual-stealing stuff, and about the enigmatic Gisborne. The latter I mostly got from him telling me directly, but eh.

Mostly, though, I just figured how to steal more stuff. 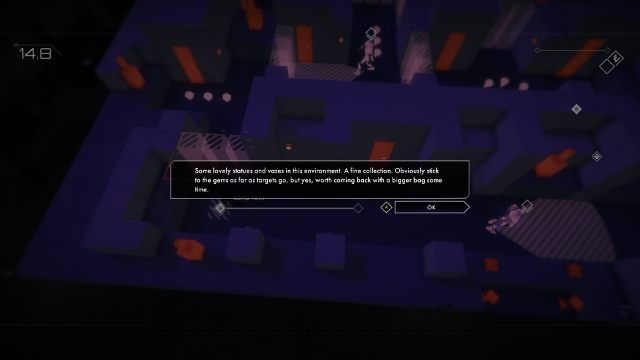 My overall reaction to Volume is mixed going on positive. More positive, actually, as time has gone by: I wasn’t really taken in by it initially, but over time, I started seeing that the things I was seeing as negatives and flaws weren’t that detrimental to the experience. Some personal biases also had to be overcome, as you do.

Volume is, all things considered, a pretty interesting game. I wouldn’t quite say it is a stealth game, even though it claims that for itself, but rather that it’s a heist game. A non-violent, puzzle-based heisting game, with stealth elements. If you want to get particular.

I’ve written and talked before about how the intent of stealth games — to me — is to provide a particular stealth fantasy. The ninja, the assassin, the elusive cat burglar. Stealth is front and center in these games because ‘being stealthy’ is the thing you want to do. In contrast, other games use stealth as a tool. Stealth can be one part of the player’s arsenal, or even the only part, but the fantasy being sold is fundamentally different.

Consider: in Mark of the Ninja, stealth is an indelible part of the gameplay experience. The fantasy being enacted in that game is that of the ruthless living shadow. Dishonored has a somewhat different approach, but here, stealth is only one of the player’s paths: it’s often just (or nearly) as viable to go loud and hard. Dishonored’s fantasy is that of the supernatural agent of vengeance and retribution. And that happens to be something you can do stealthily. It’s just that you can also do it five explosions at a time.

Or compare and contrast your Thief and your Payday. Both are about the stealing of the stuff for fun and profit. But Thief tries to sell you on the allure of being the invisible masked skulker, the guy who gets in and out before anyone even notices the window latch. Payday, in contrast…

To me, Volume falls in the latter category of game. It uses stealth as a tool, without actually being ‘about’ stealth. Volume is a game about getting all the shiny pellets, and then getting to the exit, without getting shot. 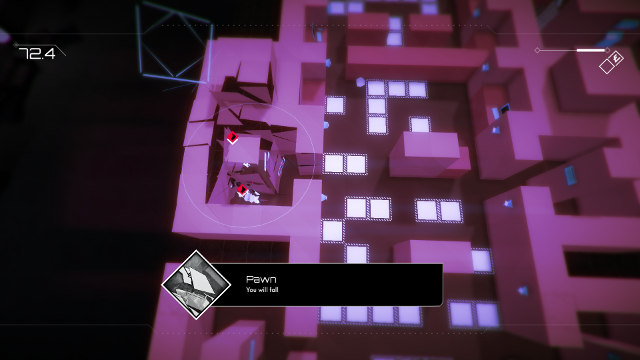 This isn’t always as easy as I’d want it to be.

Tracing DNA, Volume strikes me as a sort of Monaco by way of Dynamite Jack. It has the former’s penchant for sneaky heist shenanigans and bright, colourful levels, and the latter’s one-character structure, simple maze-type levels, and the time-score-chasing as a front-and-center mechanic. 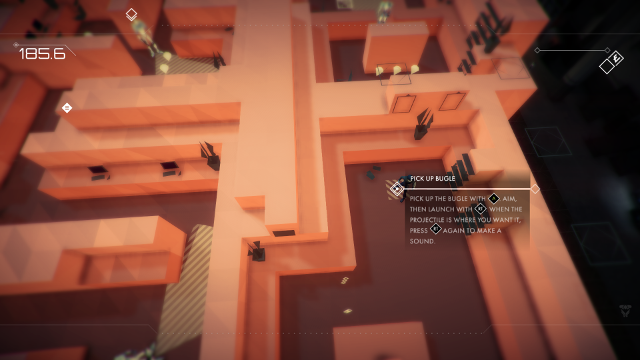 And since both games have fun, situational toys as a strong mechanic…

And for the most part, that combination works. As long as you temper your expectations.

When I first booted up Volume, the impression that stuck with me for a long time was unfinished. I went into this with the expectations befitting a ‘stealth’ game. But what I got instead was… different? What I saw was incomplete-looking levels, an incredibly simplistic core gameplay mechanic, bare-bones enemy AI, and voice-acting of highly varying quality. It seemed inconsistent with the experience I’d imagined for myself.

Of course, time of writing, I understand that was just my biased first look at play. Calling Volume’s levels ‘incomplete-looking’ is almost hilarious, in retrospect. Because guess what, Past Jarenth? That’s the whole point. Volume’s levels are three-dimensional augmented reality projections being created by a nine-year-old AI literally giving it his first try. Hell, the game lampshades this at several opportunities. Saying Volume’s levels look unfinished is like saying Mondriaan paintings look square: great observation, Sherlock, but it’s not quite the insult you imagine it is. It is obviously possible and viable to dislike the particular aesthetic, but at least give it the credit it deserves by understanding that it’s intentional. 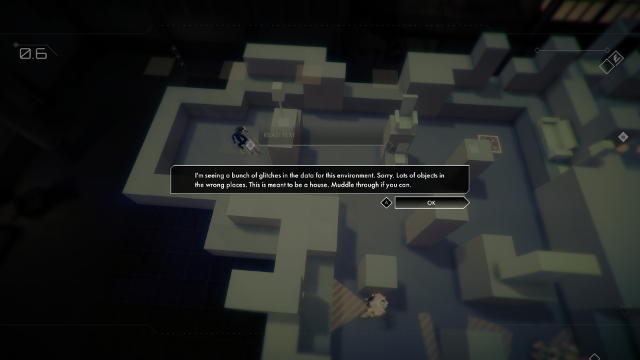 Yes, I’m basically talking *just* to Past Jarenth in that last paragraph. 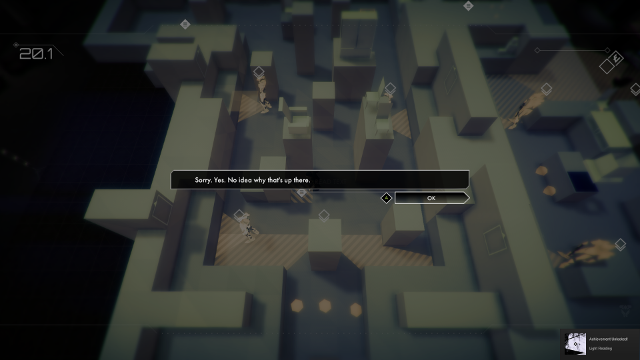 Similarly, the gameplay is seemingly simplistic because that serves the intended experience. Volume is essentially a puzzle game: one where you quickly play many short(-ish) levels in order to gain more and mastery. There’s a reason its most important metric is time. In Volume, you’re expected to quickly assess your surroundings and your situation, and to quickly figure out the best way to quickly go from start to finish. Adding a complex core mechanic to that mix would’ve only been detrimental. It doesn’t really need more than the ‘gems’ you collect.

Same thing goes for the enemy AI. While playing earlier, I was writing a paragraph in my mind complaining about how the enemy AI often is — to put it subtly — dumber than a sack of hammers. They obviously have limited patrol routes or set paths, I can’t really complain about that. But when they spot you and chase you, the results often are…

Okay, so here’s the thing. If Volume’s Pawns spot you, they’ll do two things. One, they close in on you, and two, they start aiming their weapon at you. A small timer ticks down over their head; if it hits 0, they shoot and you ‘die’. Back to the last checkpoint. If you break line of sight, they’ll keep going to the point where they last saw you, and then scout ahead a little more.

It’s a decent-enough system in theory. In practice, though, it’s at times both finicky and hilarious. It’s devilishly difficult to intuit how the sight cones of moving guards swing, and they only have to touch your outline wrong to go aggro. It’s not always clear whether or not you’re hiding ‘correctly’, too, when hugging the wall. But on the other hand, you don’t really need more than one low wall of pillar to lose any pursuers: just dance around it and duck up and down until they lose interest and run back. 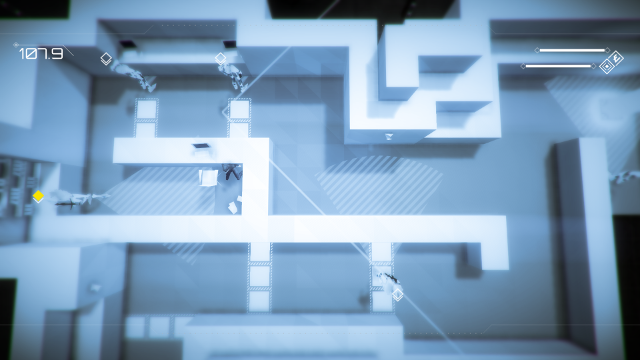 “Where did that guy go? He ran into this clear dead end. Maybe I should take one more step forward?…”

It’s all silly and glitchy and simplistic because it’s intended to be silly and glitchy and simplistic. The guards aren’t intended to be accurate simulacra of human behaviour. They’re designed to be obstacles. Predictable obstacles that you can overcome with planning and timing. And with fast reflexes and luck, if you’ve got it. The glitchy behaviour and the non-deterministic way the enemies sometimes respond is a great source of time-saving and sequence-breaking. 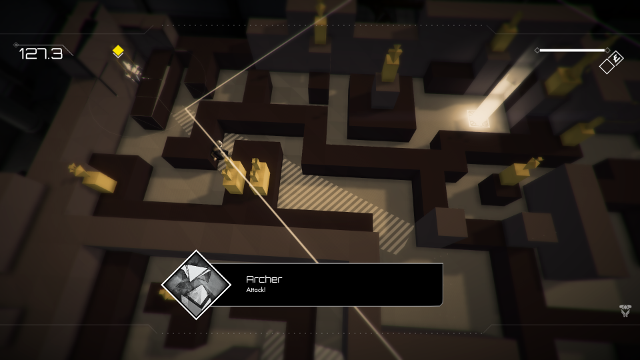 For instance, you *can* sneak around this long-range enemy. But its attack timer is so long, you can easily run most of the maze while it’s winding up… 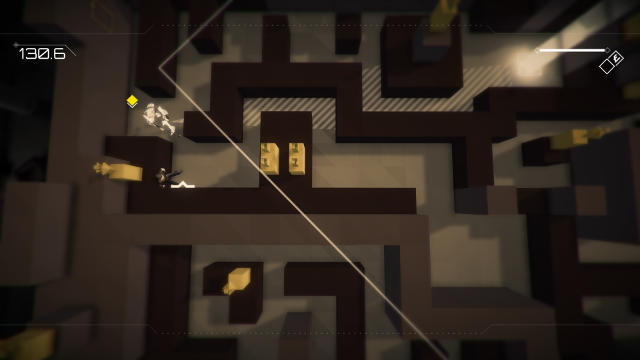 …and then when it moves in to find you, its narrow vision cone means you can easily slip past it and race for the exit.

And, of course, I say ‘the gameplay is seemingly simplistic’ because Volume does get more complicated over time. New enemies, new behaviour patterns, new environmental hazards…

New toys, too. Fairly early on, levels start having items that Locksley can carry around. Items like a gun that fires noise-makers, or boots that let you run silently, or a shiny thing that completely captures the attention of any guards. I won’t spoil the whole item set, but they’re all based on the idea of manipulating the guards’ abilities to hear and see you. You can only carry one item at a time, but they have unlimited uses.

The items actually start factoring into the ‘correct’ puzzle solutions almost immediately. Levels will often have branches where you functionally need an item to get past. The branching level structure is a recurring favourite: you can go here or there, but you can’t actually go there if you don’t have the item that distracts a guard in the right way. But where would that item be? Would it be… on the other path, maybe? 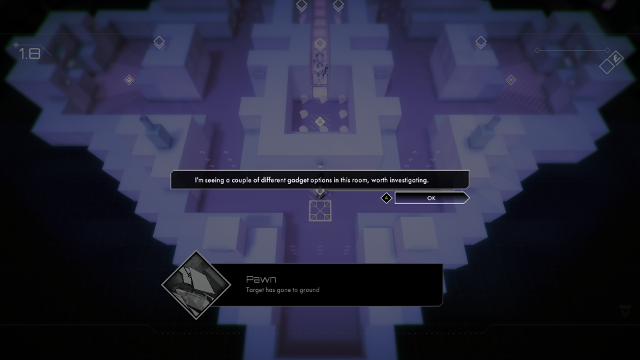 It’s not always *that* straightforward. But often.

Honestly, this sometimes makes the levels a little too linear for my taste. Because you can’t zoom out the camera and get a full-level overview — as far as I know — larger levels can engender the feeling of just ‘going with the flow’. “I can literally only go one way without getting shot immediately”, that idea. Even then, though, the levels aren’t necessarily easy. But I like the more open-ended ones a little better.

…eh. It’s not bad overall. Not by a long shot. Both Danny Wallace and Andy Serkis give excellent performances as Alan and Gisborne, respectively. Clear, convincing. It’s just strange that Charlie McDonnell’s Locksley sounds so out-of-place in comparison. Like… the best way I can put it is that all of Locksley’s lines sound like they were recorded in a sub-par voice booth. And they only had that booth for a single day, so all the lines had to be recorded in one take. And the actor had a bit of a cold.

Voice preferences aside, the storytelling in Volume is alright enough. The actual direct story is told in some of the levels, voice clips that play (over and over) while you do your stealing. Still, the settings it sets capture the attention: a corporate-run England, a corrupt empire, a army of VR-trained soldiers, artificial intelligence, and Locksley as a social-media take on Robin Hood. There’s also more of a meta-story running through the levels, outlining the target you’re demo-hitting and why. 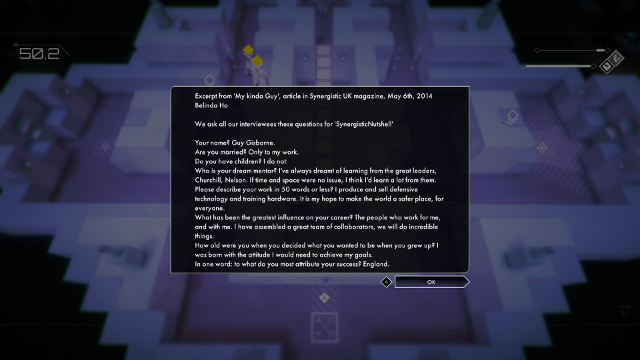 There’s also the occasional text log in the levels.

Volume’s story adds a little flavour to the gameplay proceedings, but it’s ultimately a side show. Gameplay and story are definitely in different rooms for this project. It’s unsurprising, given the gameplay focus. While the background helps, sometimes you don’t really have to know why you’re collecting all the shiny gems. You just have to do. 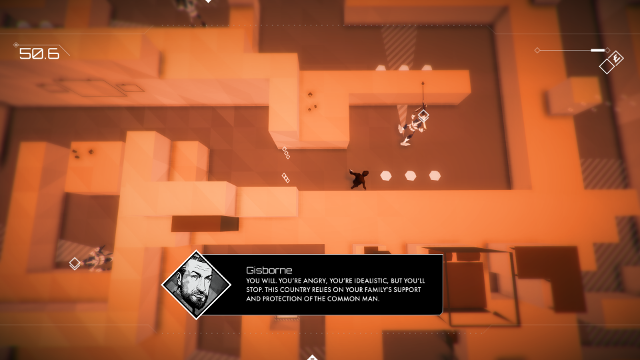 That’s lovely, dear. Could you repeat that after I steal all your gems?

At the end of the day, Volume is a neat, well-crafted heist puzzler, with a fancy polygon aesthetic and some smooth voice acting that isn’t always that smooth. I’m not sure I’ll ever get farther than 42% into it, because by and large simple-mechanic score chasers just aren’t my jam. But it’s easy to see that Volume is an interesting addition to the genre. And with a hundred core levels to start with, and the weekly curated user levels, if you do find this game to your tastes, you’re pretty much guaranteed to never ever run out of content.

Volume runs about twenty bucks on Steam, or on your PlayStation platform of choice.

Jarenth talks a mean game, but remember that time he was all *about* the Spelunky leaderboards? Or Super Hexagon? Crush his feeble tutorial-level scores on Twitter and share the results on Steam. And if you dig Indie Wonderland and Ninja Blues in general, why not consider supporting our Patreon campaign?