Those of you who know game designer Mike Bithell probably associate that name with his magnus opus, and formerly only opus, the colourful block-jumping puzzle platformer Thomas Was Alone. The latter gathered quite some praise on account of its gameplay, graphical design, and storytelling through soothing narration (almost a year before Bastion would use the same tactic), turning the former into a name to be watched. How would Mike Bithell iterate on the indie darling success of Thomas Was Alone? What would his next move be? The world waited with bated breath.

Well, unless — like me — you follow Mike on Twitter. Because it was pretty hard to miss the process in action, there. Bithell Games’ next step was to draw in some additional talent, artists and sound directors and voice acting talent big and bigger. And all that talent was then used, over several years, to create Volume. An ‘unapologetic stealth action’ game.

Hey, have you guessed yet what this column is about?

I boot up Volume. The bright, angular, futuristic letters contrast a little with the background. Which is… a garage? Or a basement? I see two laptops on a desk, a steaming cup of something hot, and a few dozen servers stacked in neat racks. 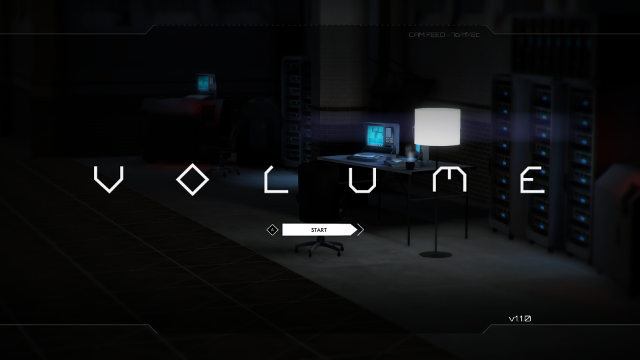 Hitting Start sweeps the camera focus away from the desk, and towards the center of the strangely-tiled floor. There’s a man, standing there. Thin build, average length, non-committal browns and greys. His only distinguishing feature is his face, which looks like some kind of terrifying future emoji. 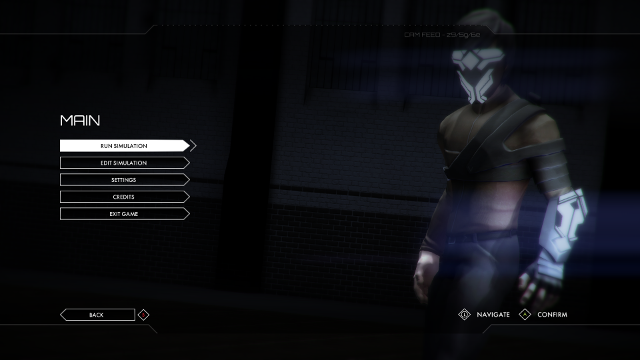 I’m going to choose to ignore this right now. What’s the rest of the menu hold?

The Settings menu hides all your usual suspects. Basic Settings is language, audio volumes, simple graphics, and some decision about ‘lockdown mode’ I can’t quite parse yet. Advanced Settings is a small selection of advanced graphical stuff: anti-aliasing, shadows, framerate caps. Controls has a small list of rebindable controls, in both keyboard and controller flavours. So far, so standard.

Only two things really stand out. One, the Customize Character menu does… nothing? Opening it gets me three names, one of which I can apparently select. But nothing actually happens when I push the buttons. 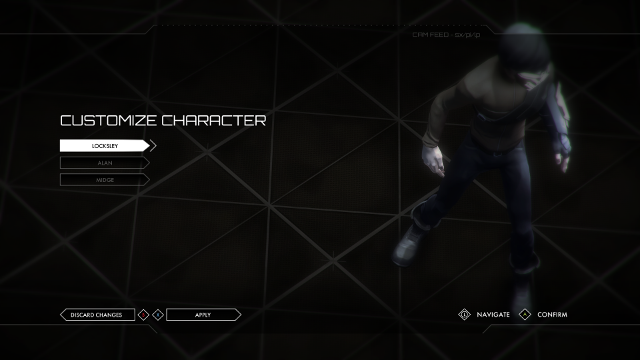 Do you want to customize ‘Locksley’? Well TOO BAD. Play a *different* game for that shit. 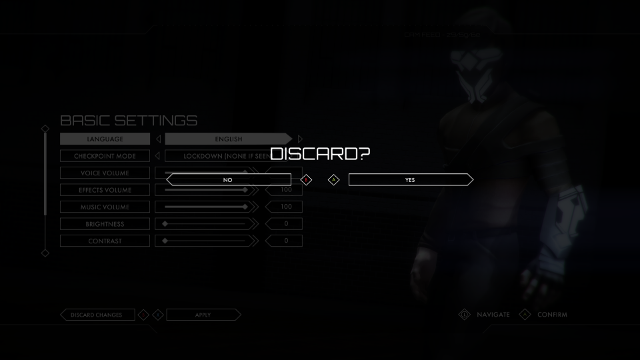 Worse: the button you use to cancel out of options is B. So when this secondary popup appears, intuitively, you’re going to be hammering B again, like ‘yeah yeah, I’m sure I want to leave’. But in *this* particular context, B is the *cancel* button. As in, you CANCEL YOUR CANCEL.

Beyond Settings and Credits, I can Run The Simulation and Edit The Simulation. The latter actually seems to be a fully functional level editor. Which I think is super rad. Even if I hardly ever actually build levels myself, I’m always happy to see level editing tools included in games. Man, remember when all games came with their editors attached? I had some good times in Warcraft II and Age of Empires, let me tell you.

Anyway. I’m not here to build levels (right now), I’m here to play them. Which I guess involves Running The Simulation. So without further ado… 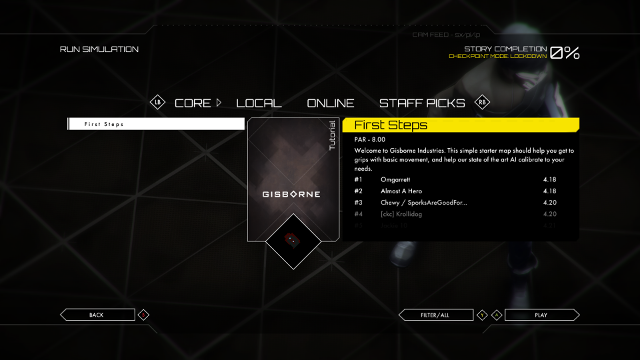 Tutorials! My only friends in this madcap gaming world.

Even the first time in, Volume hides a lot of possibilities. In the ‘core’ set of levels, sure, I can only access the one tutorial. But if I wanted, I could immediately step over to the Online set of user-created levels, of the Staff Picks curated user content sub-list. Don’t know if I’d be much good at the game if I did that, but I do like that the option is there. As someone who only recently started playing Spelunky again, on a new machine, being forced to replay the tutorial to unlock access to the main game annoyed me to no end.

This time around, though, I actually want the tutorial. So, sure, let’s do those first steps. I hit the button, and…

The camera mode switches. The reduced crispness and sudden clear motion blur tell me we’ve entered cutscene mode. I’m still very much in the same warehouse basement garage, though. The camera lovingly pans past the aforementioned server racks, weird laptops, and coffee cup, before finally coming to a stop over WeirdFace McGuy. From up close, it’s more obvious that his strange face is probably intended to be some sort of mask. And I… I knew that!

Suddenly, armed men storm in! Pointing their large, scary guns at Masky Von Emojistein is enough to drive him on his knees. Hands behind his head. 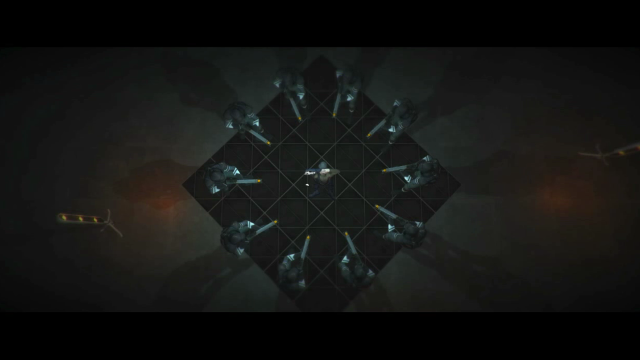 Game… game over, I guess.

The world shatters into view. 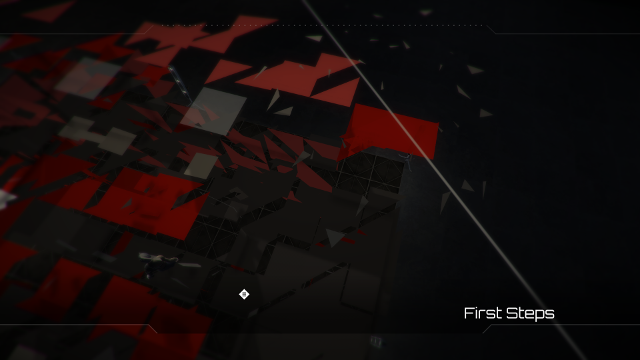 A whirlwind of red and grey and black triangles and polygons rapidly swirls together. At the bottom, I can still see the warehouse’s tiled view. And in the center, WhiteMan de Protagoniston stands. But everything else… it’s only a few seconds later that the swirling stops, and I find myself in… 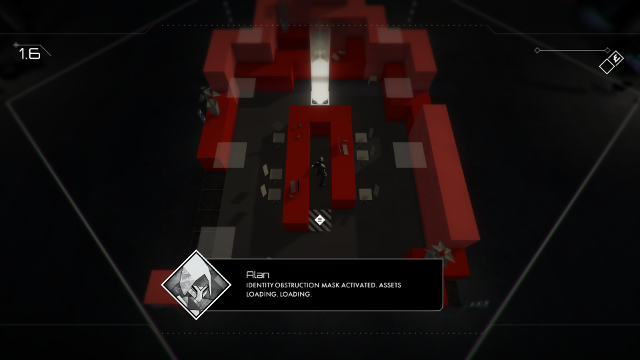 “Identity Obstruction Mask Loading,” a voice speaks, and I immediately recognize that voice as the guy doing the Thomas Was Alone voice-overs. Danny Wallace, that’s his name. “Loading.” Can’t say I blame Bithell and co for retaining his services a second time. “Loading.”

“Load tutorial one,” a second voice cuts in. Can’t say I recognize this one, but I appreciate his moxie in saving me from a billion error messages. Locksley, the character portrait indicates his name is. Locksley, and the previous voice was Alan. 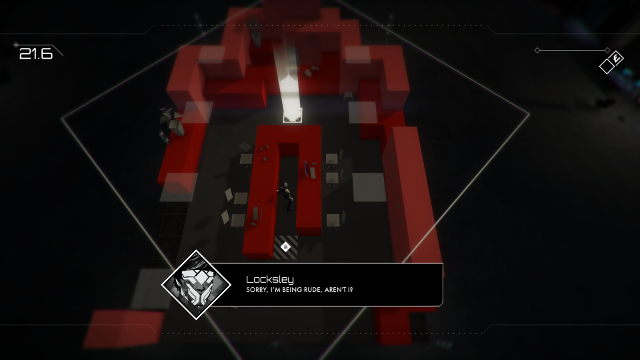 Locksley — ‘Rob’ — and Alan talk for a while. Alan is… Alan is the mask? I’m getting the building impression that Alan is supposed to be the mask. The titular ‘Volume’, to be precise: a 31 by 31 square meter volumetric projection system. Augmented reality to the max. This idea is interesting enough that I’m willing to overlook the fact that ’31 by 31 square meters of projection’ would work out to a flat projected plane. Let’s assume Alan meant ’31 by 31 by 31 cubed’ or something, alright? 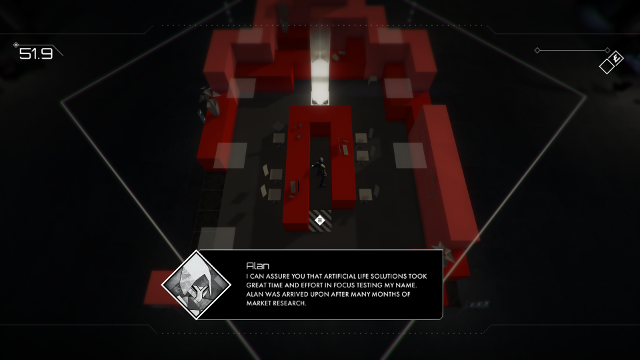 Alan’s a little defensive about its name. Don’t bring that up, okay?

Alan and Rob babble on for a little while longer. But the text is all spoken dialogue, subtitled only for reading convenience. Which means I can’t skip ahead. A little bored after several seconds of Alan explaining Alan, I nudge the left analogue stick a little. It’s in this way I find out that I can actually move during the dialogue scenes. Nice!

I walk out from in-between the desk. A dashed square on the ground before me holds a diamond icon, a series of horizontal black stripes on white that emulate written paper. ‘Read me’ in icon form. And guess what happens when I walk up to it and hit A? 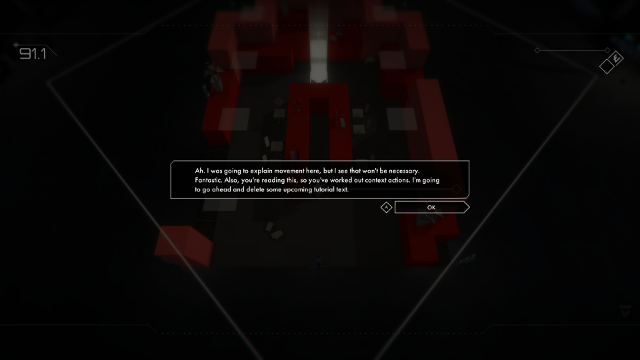 Alan is impressed by my moxie!

I walk around the rest of the room. It’s a little tricky, sometimes, to figure out what is and what isn’t… real, for lack of a better word. The desk and the chairs definitely exist in the world, but several larger grey squares are just see-through decoration. And while the walls clearly aren’t everywhere, I can’t seem to walk on the clearly accessible lined black tiles. 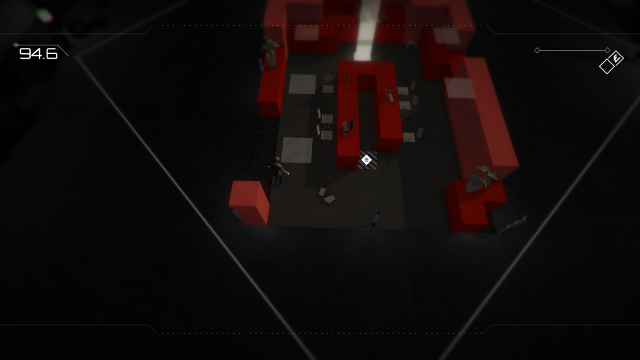 See? Doesn’t that look like I ought to be able to go there?

Well, there isn’t really much to do in this room. The only square that in any way seems attention-grabbing is the one up north, that shines the light of a thousand suns straight up into the heavens. Might as well walk into that, I guess. 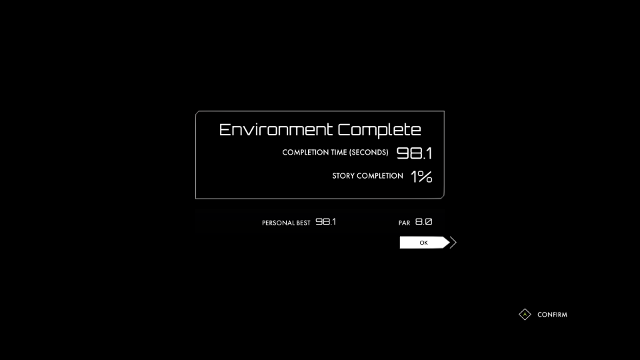 Success! In a way.

Time for level 2! ‘Diamonds in the rough’. This level is different from ‘First steps’ in three immediately apparent ways. One, its colour palette is very green with a dash of yellow, not the red-and-grey from before. Two, it’s larger than a breadbox. And three, it has floating diamonds everywhere. 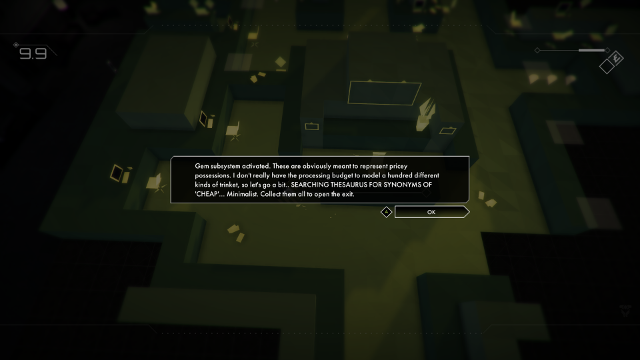 ‘Alan, are these really *floating diamonds*?’ ‘No, of course not, you twit.’

So the diamonds represent valuables, eh? And the level exit, the brilliant column of light I stepped in earlier, that thing’s locked until I get all the diamonds? Okay, I see the direction this game is going. ‘Gotta catch ’em all’, where ’em’ represents the (ill-gotten) wealth of people smart enough to get rich, but carefree enough to leave their riches floating around the house.

Obviously, the rich aren’t all that gullible. That’s why level 3 has cool polygonal robot-esque guards. 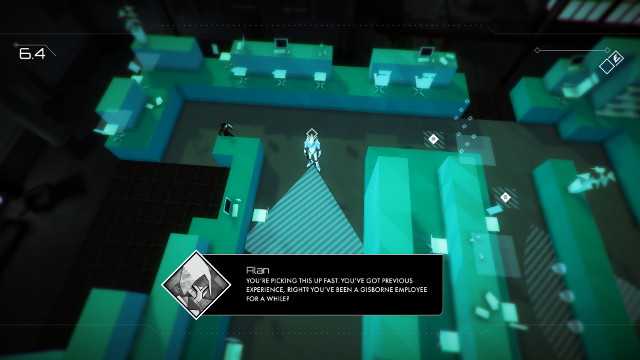 They are rad, futuristic, and unmoving.

The Pawns, because that’s what these guards are called, have a relatively limited sight range. And Locksley moves quietly enough that they don’t hear him behind their backs. I’m capable of bypassing the first one simply by, well, bypassing it.

The second guard’s a little trickier, as three of my needed diamonds are in its vision cone. Luckily, the level layout comes to my rescue: a convenient chest-high wall gives me the ability to sneak straight past the guard. Turns out that if you bend the knees and hug the wall, they can’t actually see you; fancy that! And because the gems I need are also behind the wall, I can pick them up on my way out. 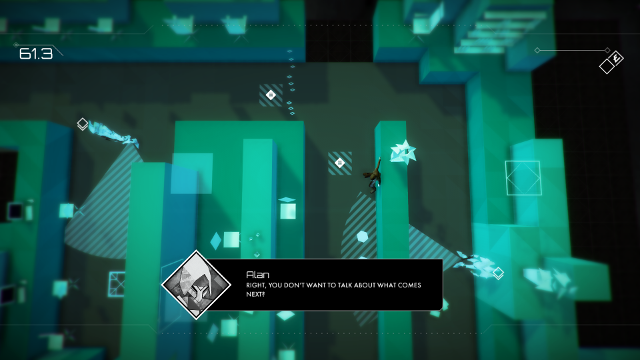 One has to wonder if this guard even knew the gems were *there*.

Once more, I make it to the exit. Turning corners while sneaking is a little tricky, as sneaking is a maintained state: if I let go of Left Trigger, I immediately stand back up. But the contextual A button understands that if I’m sneaking, and I’m near a corner, then I will probably want to round that corner while sneaking. It’s smart like that, the A button. 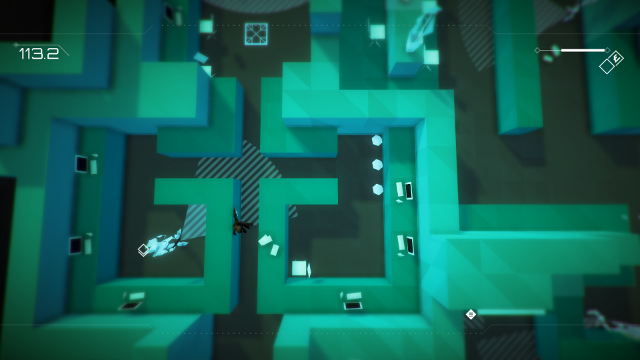 “Are you sure you don’t want to whistle out loud instead?”

Of course, there won’t always be convenient walls to hide behind. That’s why the fourth level introduces convenient sound sources, instead! Flushable toilets — necessary for full game immersion, frankly — provide a neat temporary distraction, and any Pawns within range walk over to investigate. I know they’re in range because the aural range of the toilet-flushing is indicated by an expanding circle, that even jolts the level polygons for a bit. 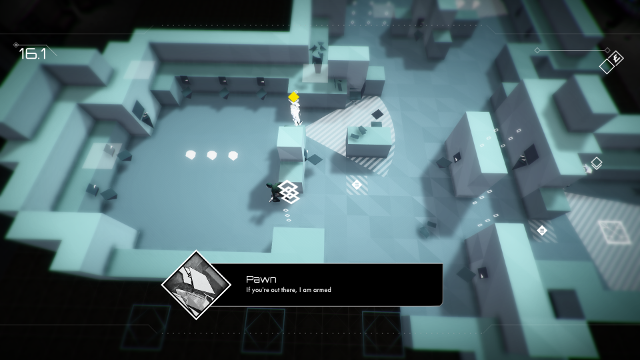 You may wonder why there’d be a toilet in the main hallway of this building.

And if there aren’t any convenient toilets or sinks around either, Locksley can always whistle. More of a risky move, that, but sometimes you just have to distract a guard. 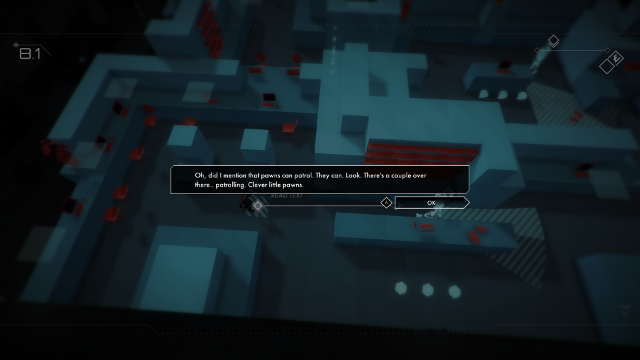 Particularly if they’re getting *smarter*.

After four tutorial levels, Volume officially takes off the kid gloves. Which doesn’t mean I can stop learning, obviously, or even that the game stops explaining stuff to me. But listen: the fifth level isn’t labeled Tutorial any more. If that’s not a victory, I don’t know what is. 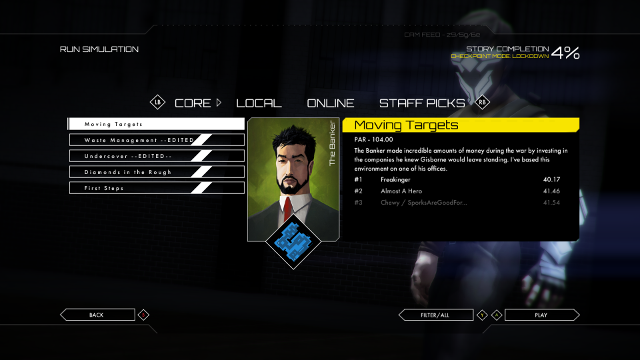 They are instead labeled ‘fancy beard man’.

From the fifth level onward, the levels are no longer patterned on virtual reality training environments, but on personalities. The Banker, the Merchant, the Deposed Queen. From the blurb of each level, I learn why this particular location is worth robbing. The Banker made money during ‘the war’. The Queen is the ‘deposed co-founder of Gisborne Industries’. The Merchant trades in human lives.

I, er… I honestly have no idea still why I’m stealing all these floating gems from these people.

But then again, neither does Alan, I don’t think. 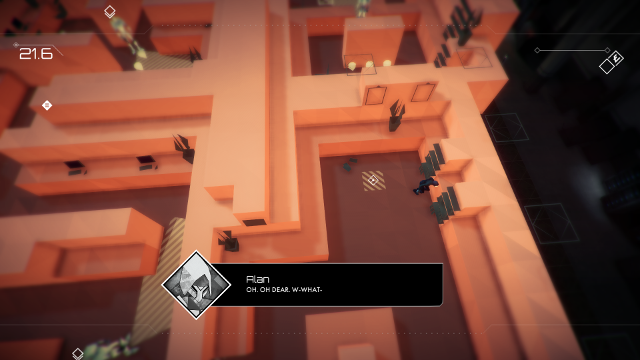 And, don’t you know, I’d like to understand just what is going on. So here’s what I’ll do.

I’m currently twelve levels into Volume. I’ve also completed twelve percent of the story mode. This seems non-coincidental. I’ve noticed that every few levels, bits of story seem to happen. So I’m going to play, until I hit… fifty percent? Something thereabouts. I figure playing about half of the whole game should get me up to speed a little bit. Volume isn’t a Final Fantasy game, so my hopes are good.

Check back in with you once I have more interesting stuff to say!