TEMBO THE BADASS ELEPHANT. Take that, every other video game animal mascot! You’ve all been replaced in a single fell swoop. Sonic the Hedgehog? Bubsy the Bobcat? Daxter, the pantsless weasel slash secret Precursor? Mario the plumber? Irrelevant, irrelevant, irrelevant, irrelevant. I genuinely think Game Freak has reached the pinnacle of mascot-ing, here. Tembo The Badass Elephant For All Video Games, 2016.

No, I actually haven’t played the game yet, why do you ask?

It’s true, I grant you, that Tembo’s titular first outing may very well suck. That’s always a chance! I just don’t see how that would have any bearing on my immediate and total love for TEMBO THE BADASS ELEPHANT. People still love Banjo and Kazooie, and their ‘most recent’ game was apparently terrible. And the less said about the aforementioned blue speed rodent… I strongly believe that, no matter the outcome of today’s review, Tembo The Badass Elephant is a character design that will stand the test of time. Part pachyderm, part commando, all badass. I wouldn’t be surprised to see Tembo in the next set of Smash Brothers DLC.

Only one way to find out!

Tell me I was wrong in pre-gushing about this game. Tell me, I double dog dare you. 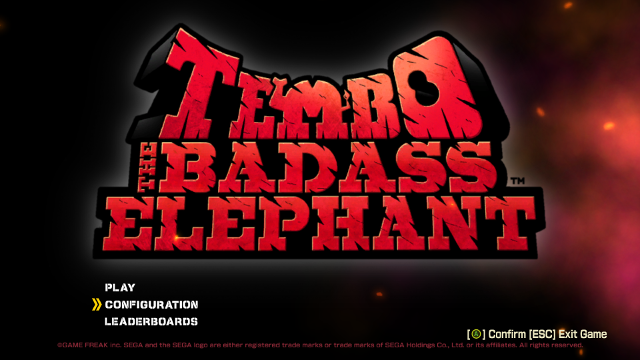 All this, and you guys can’t even here the blaring trumpet soundtrack. They imitate elephant war cries, because of *course* they do that.

Should I jump into the adventures of Tembo immediately? No, no, I still have self-control: let’s take a small detour through the fancy Configuration screen first. Not too much: maybe a minute or two, tops. 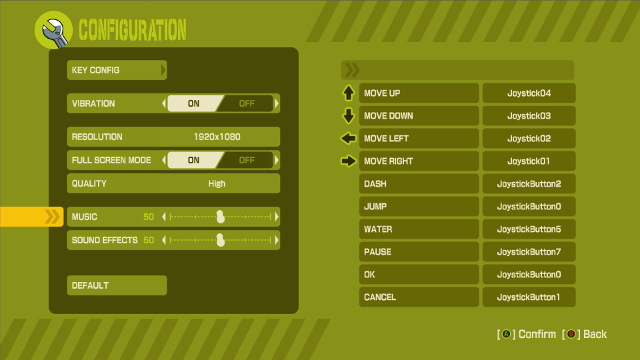 There’s not a whole lot here to waste my time on, anyway.

And I guess I could check out the leaderboards first? 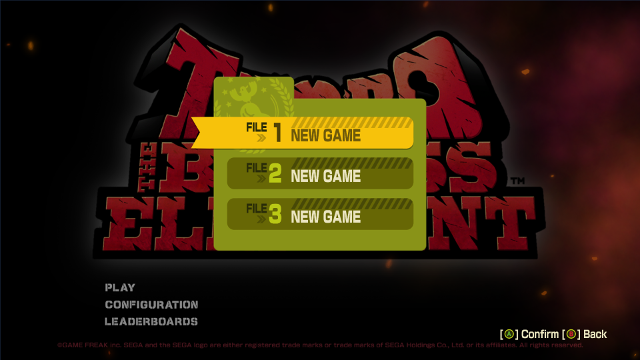 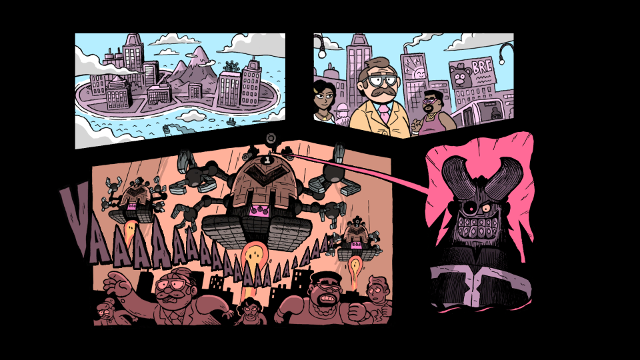 The Peanut Island army strikes back, but the skull-headed doom army’s superior weaponry gives them an advantage. The Peanut Army general strokes his incredible, luxurious moustache, trying to think of a plan. Who, or what, can stand against the might of the invaders?

Suddenly, he remembers. The Peanut Army’s jungle missions, back in the day. He was there, then, a less luxuriously mustachioed soldier among soldiers. And also there, was… 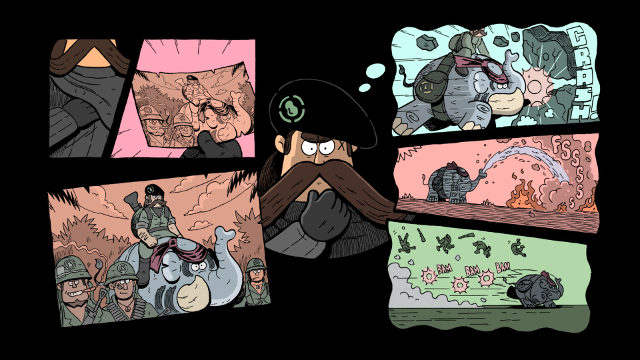 You thought I was joking about Tembo being ‘part commando’, didn’t you?

The call is made. The elephant is informed. The deal is struck. Tembo is loathe to leave the sanctity of his personal island, his life of leisure, and his lovely pink elephant partner of indeterminate status and gender. But someone has to stand against the terrible techno-Vikings. Someone large. Someone dangerous. Someone… 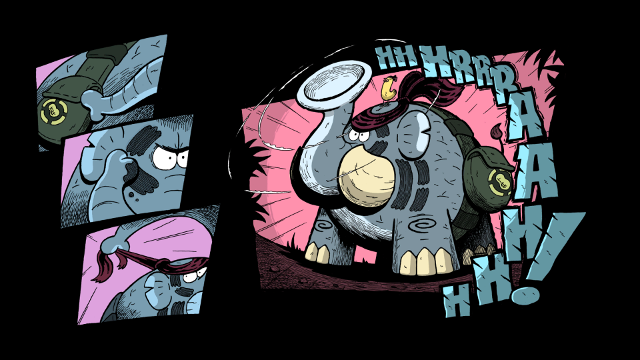 …well, you get where I’m going with this.

The helicopter flies in. Tembo travels solely in style, as befitting an elephant of his status… which in this case means ‘hung from underneath a massive cloud of birds and being hot-dropped into battle zones’. And after that whole sequence, after the build-up of the invaders and the peaceful island and the calling in the elephant commando as a last resort, it only makes sense that Tembo’s very first deployment is… 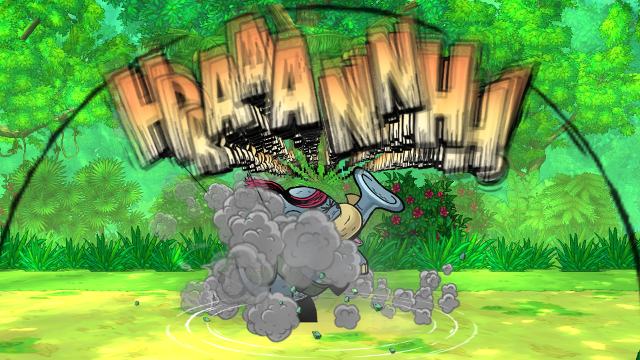 Tembo greets tutorial island. *The only way he knows how*.

At least, I think it’s tutorial island. The giant billboards with elephant controls pasted on them kind of give that impression. 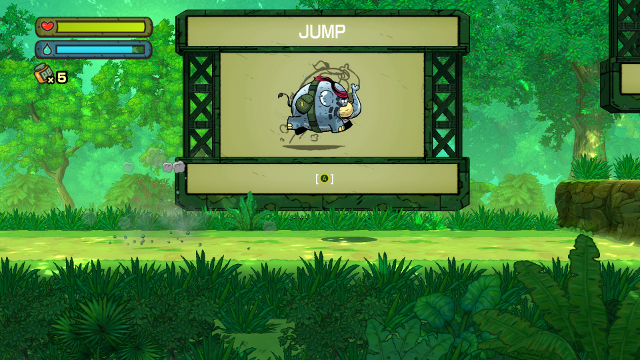 Serendipity, thy name is ‘taking a screenshot just as the actual elephant eclipses the crudely-drawn elephant actually on the board’.

I casually try out Tembo’s controls. Analogue stick moves, no surprise there. The A button jumps, and holding down A causes Tembo to… float? By kicking his legs in the air really fast? 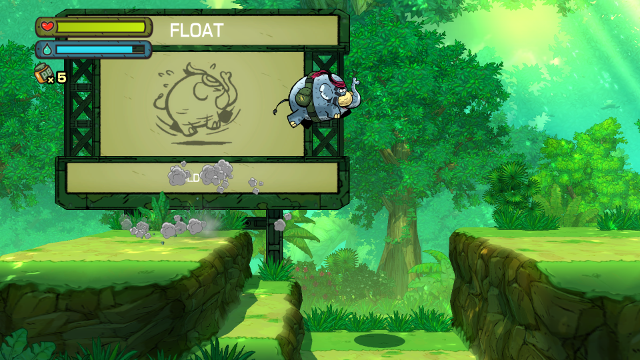 Tembo is badass in many more ways than one, I can see.

The X button makes Tembo dash. Except when I say ‘dash’, what I really mean is ‘barrel forward in a barely-contained fury, smashing anything and anyone stupid enough to stand in his way’. Holy shit, woohoo! Take that, stacked boxes of peanuts that are in my way for some reason! And take that, solid stone walls! 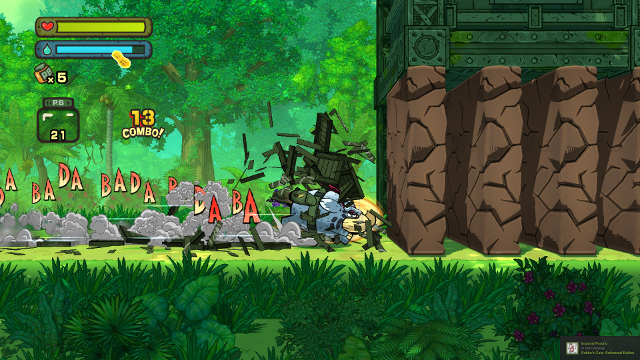 I usually don’t use screenshots with Steam-stuff in them, but this one was just too well-timed not to use.

Oh, but it gets better! Tembo can run, and jump, and run and jump, but there’s more on the list. Tembo can also jump-smash, using his sizeable elephant butt to break anything short-sighted and unfortunate enough to be below it. He can slide-kick. He can jump up and attack, causing his trunk to shapeshift into a mallet. And finally, a second press of the X button while airborne causes Tembo to diagonally smash into the ground like a rolled-up cannonball, bouncing onward a few times and leaving devastation in his wake. 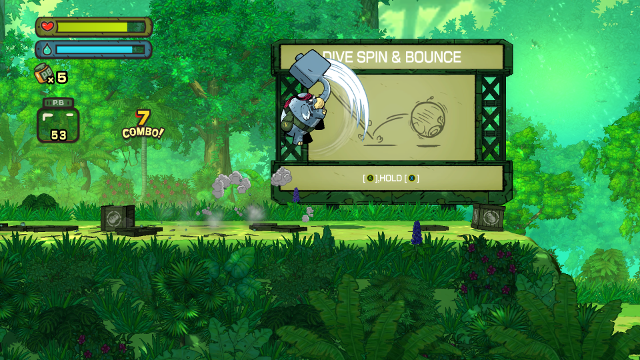 Pictured: two of the four tricks mentioned above.

And just to give Tembo more character than just being a roving force of destruction, he can also spray water from his trunk. 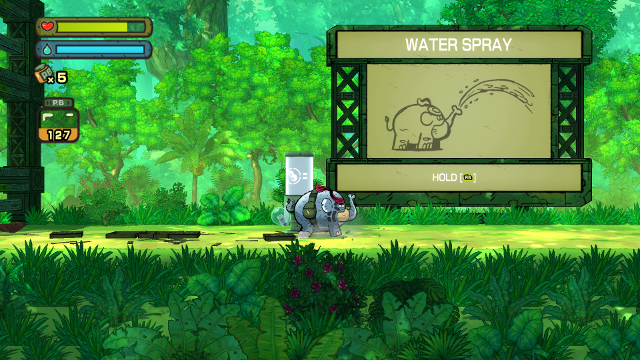 Because that’s a thing that elephants do.

And with that, my training is complete! ‘Good job, soldier!’, a billboard salutes me.

Training done, it’s now time for the actual action. General Moustache! Where do I go next? 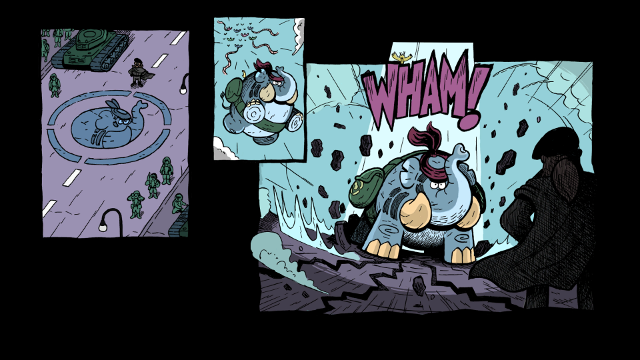 Tell me! Me, *Tembo*, The Elephant From The Sky!

And then I’m suddenly in the Peanut Army’s command center. 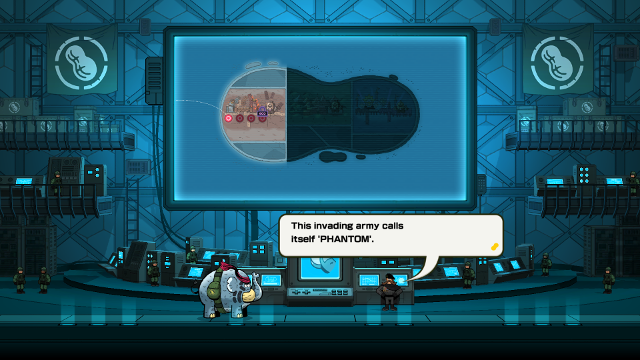 Speaking in actual thought balloons — minor spoiler: every bit of description before this was just me going on the splash graphics — the general explains that the vile invading army, PHANTOM, has sent three PHANTOM DOMES to the three parts of the city. My missions, if I choose to accept them: travel through the city, destroying PHANTOM soldiers and weapons and rescuing captured civilians, and make my way to the aforementioned domes — I’m sure you can figure out what my goal with those is yourself.

“You’ll get the gist as you go”, the general suggests, right before I move out. “Good luck!” 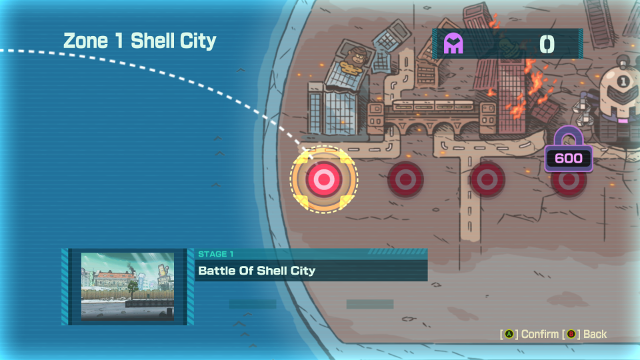 Area one, zone one.

The Battle of Shell City is a much less nice place than Training Island was. Sure, it starts out nice enough… 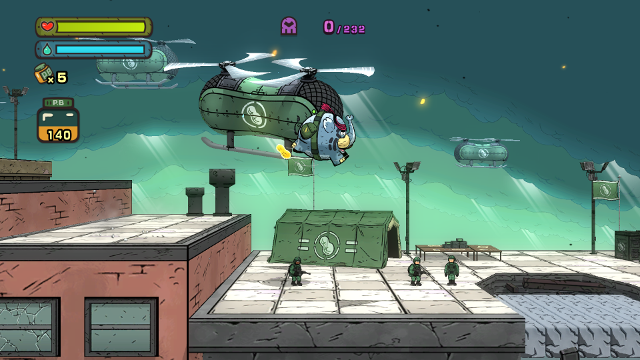 About as *green* as the previous place, too.

…but I only have to crash through one barely-there skyscraper to land in a ruined, tilted, burning city filled with car wrecks, broken roads, and purple-clad PHANTOM soldiers.

And peanuts. I’m not sure why I’m surprised to find peanuts on a literally peanut-shaped island, but there you have it.

As the general suggested, I very quickly ‘get the gist’ of what I’m supposed to do. The PHANTOM soldiers I run into are very little match for Tembo’s amazing bulk: I waltz through and over lines and groups of them in a single dash. Defeating them yields purple skull points, ‘PHANTOM points’, for no directly clear reason. The same holds for smashing the giant purple walls they put up to try and stop me. 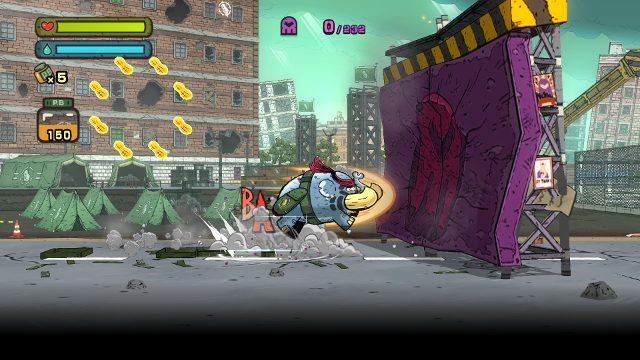 The peanuts are a little more straightforward. Every peanut I collect goes into a slowly-filling jar of peanut butter. I have five jars already. And video game-savvy as I am, I’d be very surprised if this isn’t some sort of lives system. Then again, I’d be equally very surprised to find a lives system in a non-arcade game produced in 2015. But eh.

And finally, exploring the hidden nooks and crannies of the level, I occasionally run into people trapped in glowing energy cages. Smashing those cages to dust releases the people — unharmed, yes, I’m that kind of considerate elephant — from the clutches of PHANTOM. And once freed, they make their way off of the battlefield… by riding on Tembo’s mighty back. 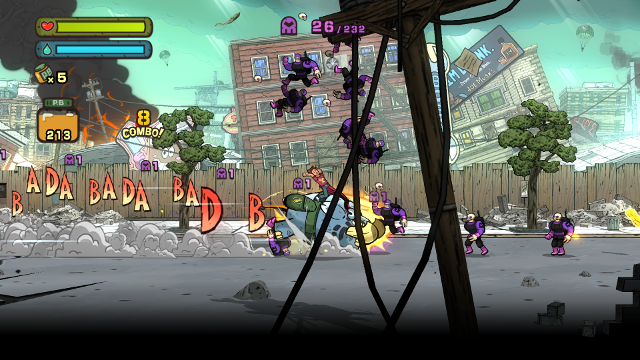 Basically, this picture encapsulates 80% of the Tembo Experience so far. 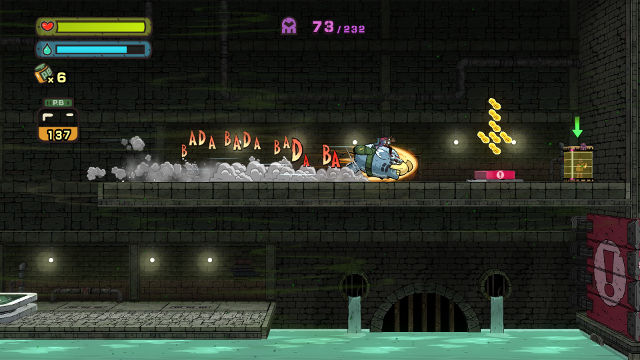 “Don’t worry, citizen! This isn’t *nearly* as lethal as it looks from your perspective!” 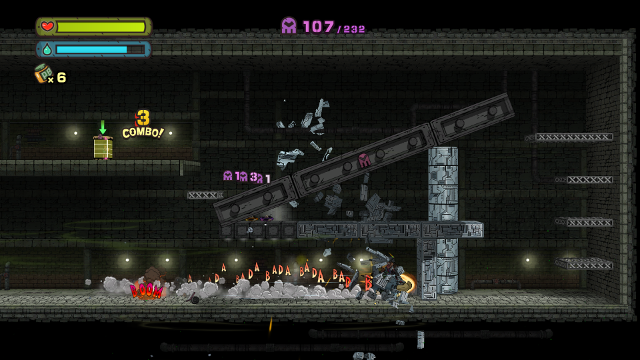 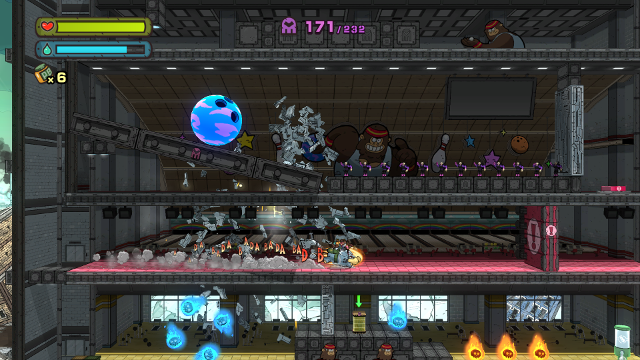 In fact, here’s the same joke again! Except also with a *giant bowling ball*.

As Tembo, I absolutely tear my way through Shell City. Very occasionally, thinking is involved: careful platforming, hunting for secrets, judging jumps, studying the level layout. Most of the time, however, all elements of thinking are reduced to split-second decisions, made while barely controlling a rampant elephant on a path of ultimate destruction. It’s fast, it’s weighty, it causes things to crash into other, exploding things. I love it.

I finally end the level by finding a massive bronzed ‘PHANTOM IS FREEDOM’ statue. 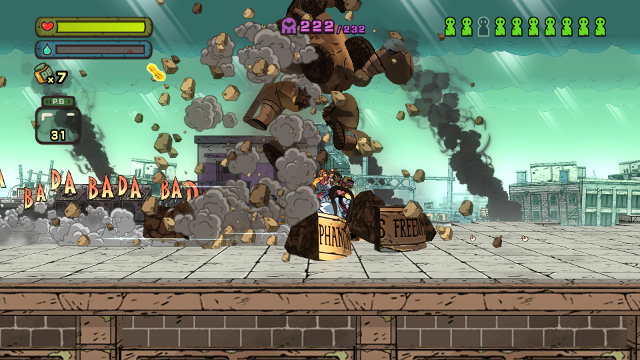 And smashing *straight* through it, naturally.

My end-of-level scores are tallied. I rescued nine out of ten people! Great job, Tembo. And I destroyed 222 out of 232 possible PHANTOM assets! Another great job, Tembo! The latter points are actually added to an overall tracker back on the mission screen: as I understand it now, I’ll need to destroy at least 600 points of PHANTOM assets to gain access to the first boss level. Which I don’t think should be too hard, as long as I keep up my path of devastation.

And keep up my path of devastation I will. Guys: I’m really kind of feeling Tembo. In fact, you know what? I’m going to trash some more oppressive purple soldiers right now. Be back once I’ve taken out that first PHANTOM DOME! Or when I’ve completely cleared the game inside one or two days. Whichever happens last.