Heya, readers. Shorter Indie Wonderland this week, as I’m sure you can tell from the title. An unexpected one-two combo of stringent work deadlines and rapid-onset fever meant I couldn’t quite give my long-form attention to any game this week. This is the reason you’re getting a shorter game overview this week; no role is played, I take care to emphasize, by my brain hooking itself onto Marvel Heroes with renewed fervor, and deciding that grinding several characters to the level cap would be the best use of my time. That obviously didn’t happen.

The game I did look into this week is the enigmatically titled oO, by developer Rainbow Train. This game advertises itself as a “hardcore minimal indie “dodge-em-up / runner” arcade game“, whatever the hell those words in that order mean; from the screenshots, I thought it looked like a minimalist reflex-driven puzzler in the vein of Super Hexagon. I figured I could play oO for a little bit, and I’d find one or two interesting things to say about it. So I did, and I did!

They just weren’t the things I expected.

oO is an interesting game with a neat, simple control hook that only very occasionally manages to play to its own strengths. 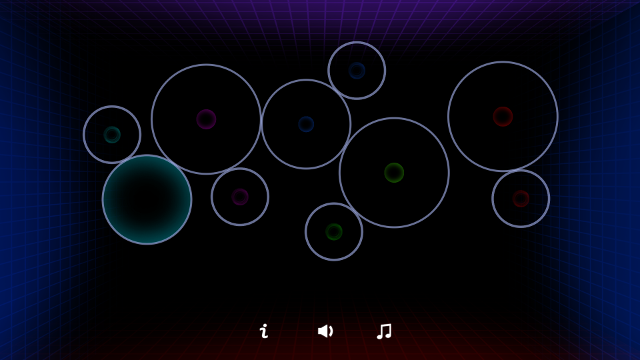 Wait, hold on, what does *that* mean?

The core of oO is actually simple to explain. The ten circles on the title screen are oO’s ten ‘levels’. Of these, the large teal, pink, blue, and green circles essentially form the game’s core level set. 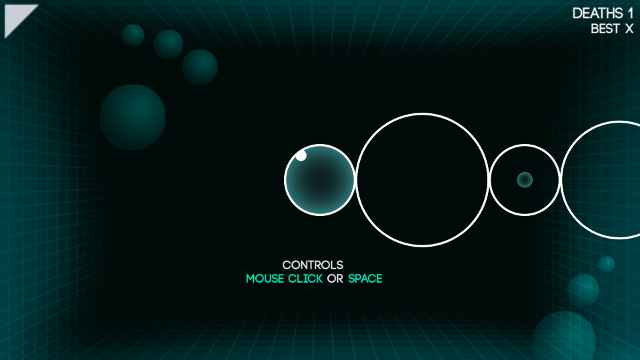 Presented here: the start of the big teal circle level.

Circles, circles, ball, some other geometric shapes, the colour teal. All very abstract-minimal-chique. Do I even need to tell you about the slow-pulsing electronic beat in the background? At this point, I wouldn’t be surprised if it was assumed.

In this setup, the white ball in the leftmost circle is essentially you. Your avatar. The little ball rolls, counterclockwise, along the inside contours of the circle it’s in. And as long as you don’t interfere, it’ll happily keep doing that forever: roll, roll, roll, roll, roll, roll…

But you and I both know you can’t leave well enough alone. And you have exactly one action here, one way to interfere: by either pressing Spacebar or clicking the left mouse button, you can make the ball switch from rolling inside the circle, to rolling outside of it. Still rolling, of course. And with a second press/click, it goes back inside. And outside, and inside. You get the idea.

The ball rolling on the inside can keep rolling forever. The ball rolling on the outside eventually slams into the side of another circle and explodes, setting your Deaths Counter to One Higher Than It Was before reforming inside the circle. But what happens, you think, if you try to switch your ball from inside to outside… at the exact point where the two circles meet? 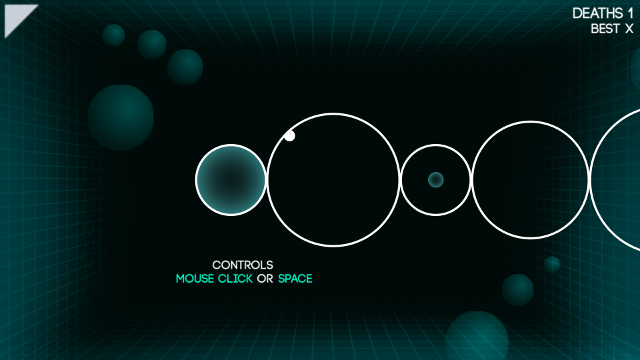 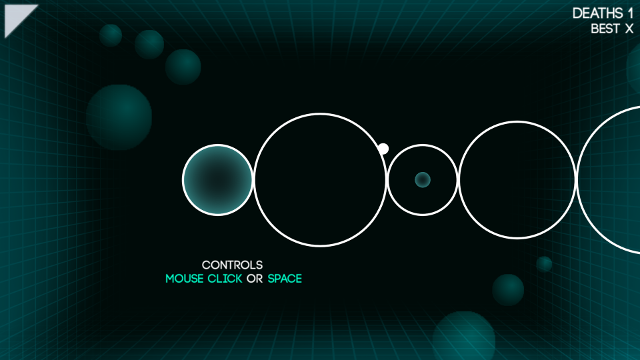 And proof of your ability to go outside the circle, too!

The goal of oO, then, is to get from circle to circle. Click, circle one. Click, circle two. Click, circl- shit, that was too early. And now you crashed into the circle you were trying to merge into. Ah well, back to the starting point! Which isn’t always the actual beginning, thank goodness: those circles with tiny coloured balls in the center act as save points, expanding into full technicolour once you merge into them. 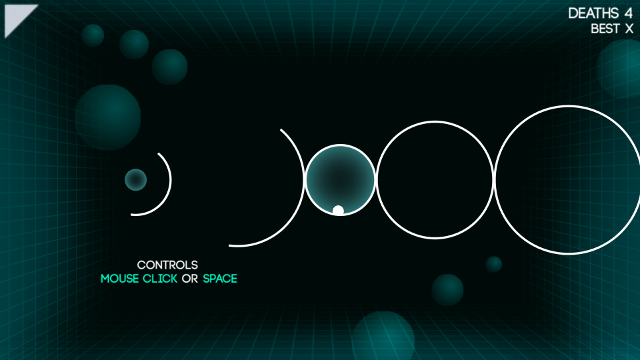 And deleting everything that came before them, because screw looking *back*!

And that, in theory, is all she wrote. You make your way through the level, one save point at a time, until you hit the black-marked exit circle and you win. Your ‘score’ is essentially the number of times you died. 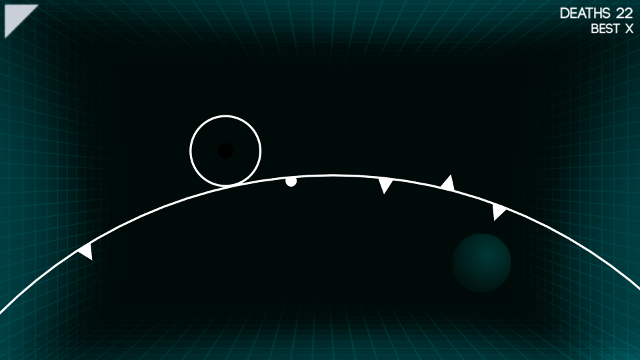 This score, on the basic teal level, is *not* great. 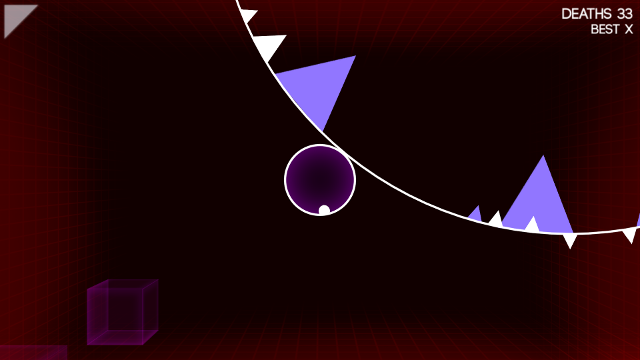 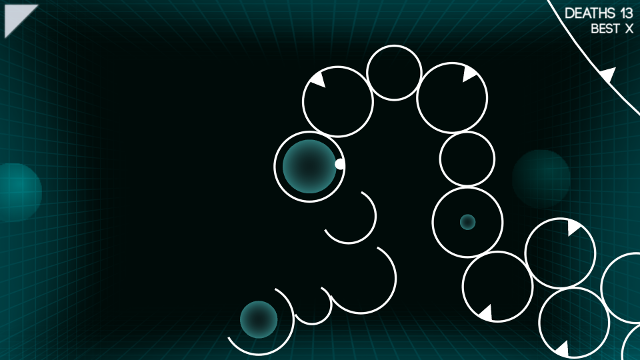 Which is not to say the ‘proper timing’ aspect of oO can be ignored. It’s damn tricky to hit the exact right points on the smaller circles, given that your ball has a single movement speed. 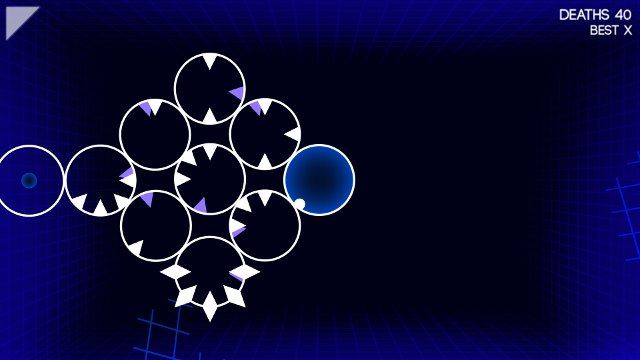 And when you put those two ideas *together*…

The green levels even introduce independently moving circles, which add another timing element to the mix.

And these are only the big-circle levels. The small-circle levels are all of the above — in that they’re literally carbon copies of their bigger counterparts — but with the added difficulty of being on acid. 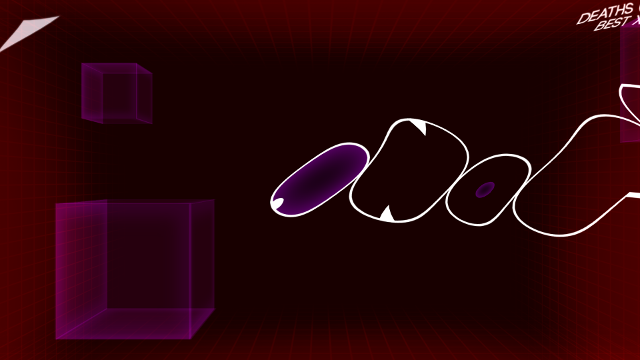 This weaves and wobbles exactly how you’d imagine it would.

And when you put all that together, you get a game that’s… kind of eh, to be completely honest.

oO’s second-biggest issue is that its core levels aren’t randomized. Every one of the four main level sets is exactly the same, start to finish, every time you start it up. Even the trippy versions are otherwise identical to the ‘normal’ ones. So the sequences of circles and hazards you encounter are always identical, down to the placement. And even worse, down to the timing. Every time you restart any given segment — and some segments you will restart often — all moving parts will move in exactly the same way, at the same speed, according to the same pattern. It’s essentially clockwork.

While this may not sound like much of an issue, the consequence of having the levels be clockwork-identical is that it shifts oO’s overall focus. Completing levels isn’t so much a matter of fast reflexes and situational assessment, anymore, as it is a matter of brute force. Levels are beaten not through being fast and clever and good at the intended game, but through memorization. Throwing yourself at a series of obstacles over and over, fine-tuning the approach every time, until you find one that sticks. Until you finally get the timing right on every shift, every spike, and every surprise-hidden-danger. 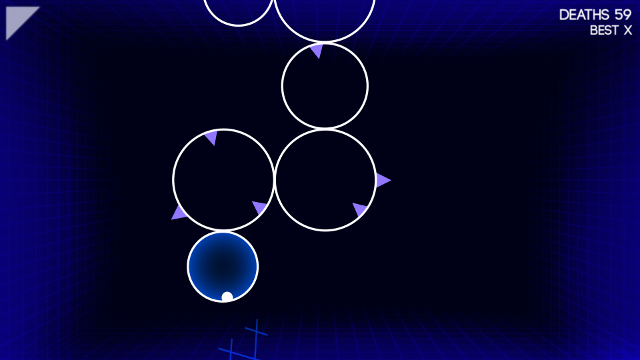 It took me longer to work through this than I care to admit.

Having oO be a game about carefully learning your way past an unchanging set of obstacles isn’t necessarily an invalid design approach, mind. It just seems so at odds with what is clearly the intended experience: the Super Hexagon-style rapid-reaction gameplay, where mastery comes from almost subconscious understanding of how to deal with hazards. It seems clear that oO wants to be this kind of game, but a good four-fifths of just isn’t.

I say ‘four-fifths’, because oO does manage to hit this experience once. The red circle, the one level pack I haven’t addressed yet, is essentially Random Mode. The level starts out with two circles, one home base and one hazard, and new circles are added as you shift into existing ones. 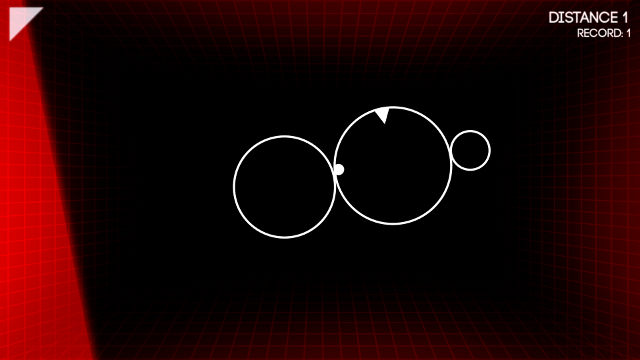 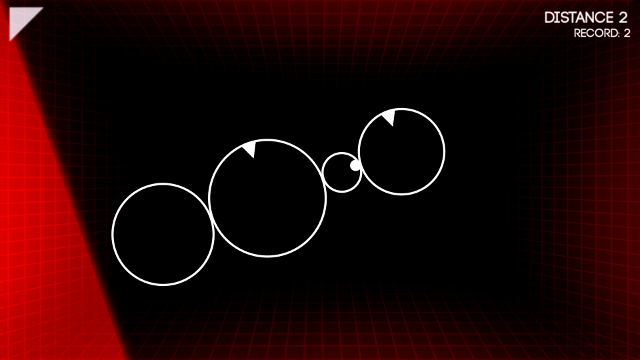 Oh, and see that red ‘wall’ off the screen’s side? As soon as you shift out of the first circle, it starts moving towards you. And I probably don’t have to spell out what happens if you get hit. 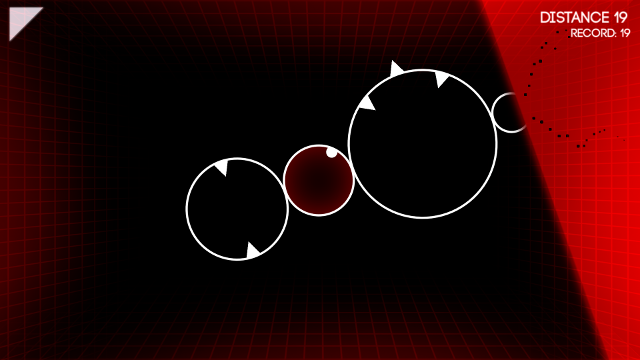 Let’s just say you have precious little thinking time in this mode.

Red draws on a small pool of hazards, a dozen or so of different circle types, to randomly generate the level as you play. Unlike other levels, there is no mastery through repetition here: the level ends when you crash, with your score being the number of circles you shifted into. The ‘save point’ circles do occasionally pop up, but in this mode, they’re actually a sore sight: hitting a save circle increases the level’s pace, upping both the speed of the red wall and the tempo of the stress-inducing alarm-esque background tune.

Compared to the red mode, the other four level packs feel like tutorials. Extended exercises in memorization and patience. Like a multiplayer shooter with an awkwardly forced-in single player mode. Red mode actually works, actually provides the experience the game purports to provide. All of the actual fun I had while playing oO, I had in this mode. Learning to understand the small set of hazards I could expect, and how to deal with them. And then slowly, through steady repetition, training myself to react in the right ways as soon as a new circle shows up. Under the right circumstances, this gameplay type actually managed to get me in that rare mechanical-flow-state: my subconscious and my fingers dancing through the circles almost autonomously, hopping hazard after hazard after hazard while my conscious mind sat gawking in a corner. Before attempting to assert itself and ruining the good thing I had going, of course. 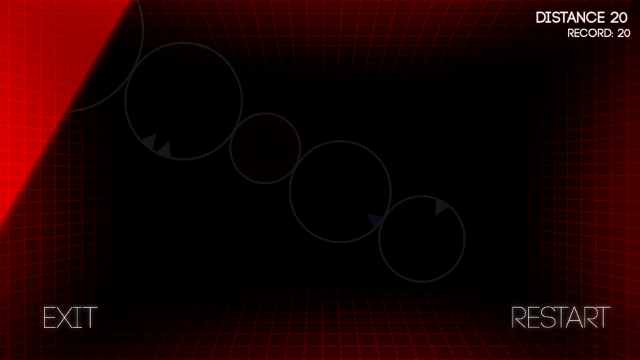 Honestly, red mode is entertaining enough that I’m close to recommending oO for twitch puzzle enthusiasts. There’s just one other thing… the real-biggest issue, compared to the second-biggest issue I just spent a thousand words talking about. Maybe you can see it on this new title screen? 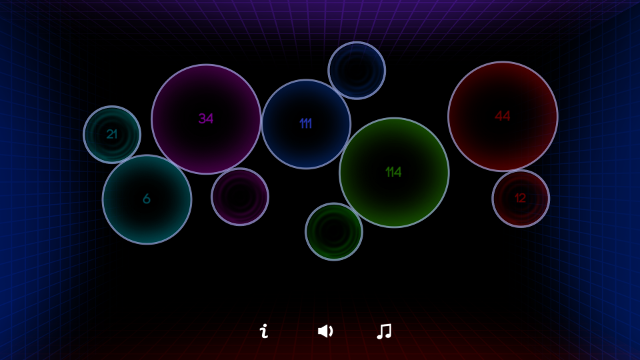 Look at the pretty numbers.

See the numbers in the circles? Those are all my personal best scores.

Do you see what’s not in the circles? Anyone else’s personal best scores.

oO has no leaderboards. Genuinely not the one. And that just… baffles me. Skill-based score-chasing games like this practically need leaderboards. The whole appeal of these games is ‘be better at it than other people’. There’s no draw if I’m just trying to out-do myself. Daddy needs his bragging rights, yo.

I mean, this is obvious, right? I won’t have to go into another thousand-word explanation about why this is a bad thing? Not having leaderboards severely hampers oO’s draw. I guess you can manually set up score comparisons with your friends, if it’s that important to you… or post your scores in a screenshot inside an online review, that works too. But while the game itself is entertaining enough when played right, without built-in leaderboards, oO has very little to recommend it over other games of the same type. There’s little reason to play oO for score comparison and incremental progress purposes while Super Hexagon still exists. And Super Hexagon does still exist.

At only a single Steam dollar, I won’t tell you that I’d recommend avoiding oO. You can get the money for it by selling a handful of Steam cards, and it is genuinely an okay game — when played in red mode. Simultaneously, though, I also can’t quite say I’d recommend picking it up. It’s fun for like, a day, on its own. More if you do manage to get your scores out. But if having ranked play battles with your friends is your jam, there are so many other games you could be playing instead. Super Hexagon, Race The Sun, Spelunky, Crypt Of The Necrodancer. And while I do appreciate oO for what it is, what it looks like, and what it tries to do, I find it very hard to suggest you ought to invest your valuable leisure time into something that just doesn’t quite return the investment. 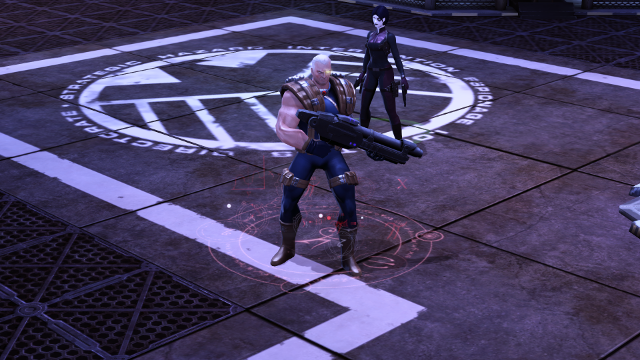 In closing, let me just strongly reiterate how little this gruff, gun-wielding hunk of time traveler had *anything* to do with the short nature of this column.

If you do up playing this game, remember: Jarenth’s current Red Mode top score is 44. Tell him how embarrassingly low this is on Twitter or on Steam. And if you dig Indie Wonderland and Ninja Blues in general, why not consider supporting our Patreon campaign?