Villages, and the precarious situations they find themselves in, are a staple of RPG adventures. Each one has their problems, whether they built themselves on top of a portal to hell or attracted the interest of local dragons, super mutants, alien doppelgangers, and so on. The Quiet Year draws on these elements but invites you to take a bird’s eye view of the unfolding drama. Oh sure, you might have caused the drama but it’s all in the game.

The Quiet Year is a world building game for 2-4 players, centered around a struggling community in the post-apocalypse. Your small town of a hundred souls attempts to get through the year, preparing for the arrival of the enigmatic Frost Shepherds in the winter. Throughout each season you’ll take turns drawing a card from the suit of the current season. Each individual card represents the events of a week and gives you the choice of two events, usually both good or both bad. You’ll weigh your choice carefully as you keep in the back of your mind… winter is coming.

In addition to the events of the week on your turn you’ll do one of three possible actions. The first is to discover something, drawing it to the map that you’ll be creating of the area around your settlement. This’ll create a unique landscape around your settlement each time you play. The second is to begin a project. To do so, you declare what you’re doing then place a die down on the map representing how long the project will take in weeks. The die will count down on each turn until the project is complete.

Finally there’s the option to hold a discussion. This is the role-playing part of The Quiet Year. You open up a subject and invite everyone to share their opinions on it in turn. According to the rules, this is really the only way to collaborate among the players or get a consensus on the direction of the settlement. The only other way for players to communicate is to take ‘Contempt’ tokens whenever a player does something that you dislike.

The Quiet Year game is pretty light on role-playing elements. Even with the option to hold a discussion, it’s actually pretty rare for a player to be willing to do so. Partly because doing so consumes your entire turn but also because unless you’ve been policing table talk aggressively you’ll likely have some idea what the other players are thinking.  The contempt tokens are a little more entertaining but they ultimately don’t add up to anything. They’re just a way to indicate your thoughts, something that’s only useful if you’re clamping down on table talk. That can be difficult to keep in mind if you’re getting into the game and often quite difficult to enforce. 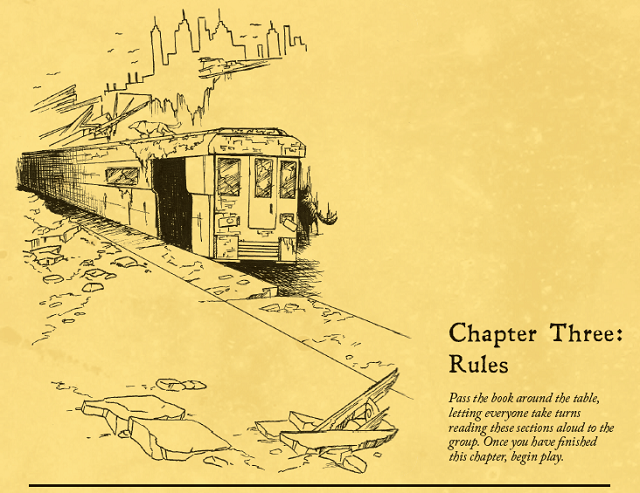 Compared to other world building games The Quiet Year is quite narrow in scope. It must be set in the post-apocalypse, whatever the apocalypse may have been. It must be set in the modern or future era. It must be a small village that you focus on. There’s also a lot narrower scope for getting this game to the table because of the limited numbers of players. This might mean that you can bring it to the table when there are people absent from your regular game as this will definitely only take a single sitting but for some this may be a deal breaker.

Also it’s inevitable that I’m going to compare this to Microscope, another world building game I’ve previously reviewed. Whereas Microscope was capable of being a setup for whatever game you want to next, it’s unlikely that you’ll use The Quiet Year in the same way. The narrow scope means that unless you have a very specific vision in mind whatever you create is unlikely to lead into a larger game. This means that The Quiet Year is difficult to recommend as a tool in the way I recommend Microscope, not that such a utility is essential in a world building game. The Quiet Year is a lot of fun in itself. The events for each season are set up deliberately to for you to make difficult choices and create your own challenges. Essentially it’s designed so that you’ll make things worse for yourself.

If you’ve stayed with me you’ve probably noticed that I’ve been fairly negative about The Quiet Year so far. So it may come as a surprise that I actually do recommend picking this game up. Something that’s quite hard to capture in describing the concept and mechanics is that this game is actually a lot of fun, especially after the players’ unity begins to fracture. The Quiet Year subtly encourages you to pull in different directions and it’s easy to get invested in your own creations. Since this game is only a one-shot it’s a licence to have some light conflict between each player’s competing vision.

Some people will find that notion unsatisfying, others will find it liberating. I think there’s definitely a certain amount of fun to be had in kicking over other players’ sandcastles. Each time I’ve played The Quiet Year, someone has taken it upon themselves to be ‘the bad guy’. They create or advance elements that are controversial or viewed as detrimental by the other players and it’s actually quite entertaining. The rest of the players might band together to try and turn the tide and whether they’re successful or not it’s amusing to be a part of. Since this is a one-shot and there’s no mechanical resolution to your village it doesn’t really matter who wins the tug-of-war. But it’s certainly fun enough to play the conflict out.

So I would recommend The Quiet Year, with a lot of caveats and conditions but recommend nevertheless. It’s ultimately an entertaining one-shot which will be completely different each time you play it. The limited player number and potential for conflict between players might turn some off this game, with good reason, but for those who are still interested this is still a good game to bring out every once in a while.

The Quiet Year is available for download from Buried Without Ceremony from $8 USD.