And now for the Steam equivalent of a game I found in a clearance bin: Bluebutton Games‘ Polarity. Not to be confused with this Polarity, or with this Polarity, but which is actually the same game as this Polarity. The trailer reveals what I hesitate to call ‘Portal-esque’ first-person puzzle-platforming gameplay, which is probably one of the two reasons I bought the game on a whim.

The other reason would be that at time of purchase, Polarity ran me nineteen cents. Which is not entirely free, but for all intents and purposes… We’re talking three, maybe four Steam trading cards thrown on the market at sub-optimal pricing, and I’d come out ahead. And, call me strange, but I’m totally willing to blindly game on a game that costs less than even a tenth of a Big Mac.

Starting up Polarity for the very first time, yeah! Let’s see what this baby has to oooooooooh dear. 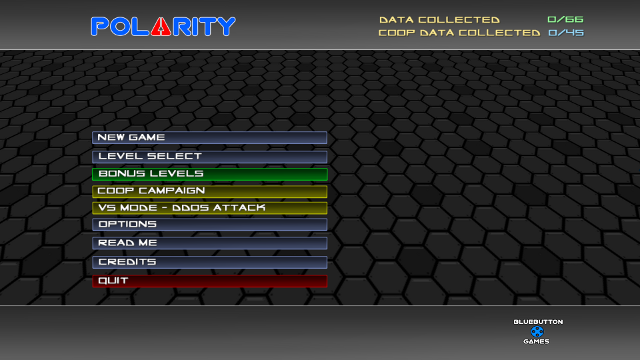 And then it actually booted it.

Guys, you know me. I try not to snap-judge games from first impressions. There’s so much that makes a game experience, the looks and the sounds and the controls and the challenges and the story and everything, that it would be hilariously childish to base any sort of game judgement on the appearance of the title screen screen alone.

I hope this screenshot accurately conveys the Early Gamemaker Game look and feel of this title screen.

Alright, alright. Aesthetic jokes aside, there’s actually an impressive amount of stuff going on on this screen. Normal campaign, bonus levels, coop campaign, versus mode. Nice colour-coding, too. The dark red QUIT in particular scares off my attention quickly.

The breadth of possibilities doesn’t quite translate into the options screen, though. In fact, the options priorities are oddly inverted: I’m given something like four separate options for different control minutiae, individual camera sensitivity sliders, and then only binary audio options. Do you want your sound on, or off. 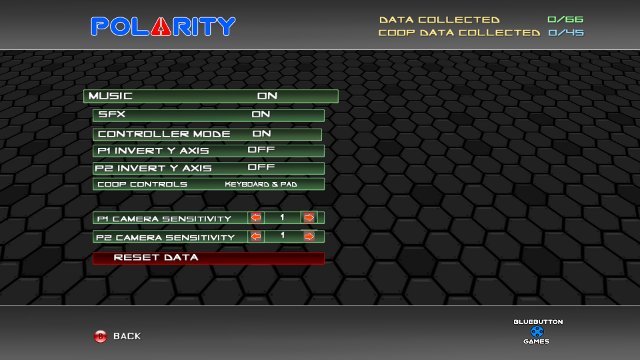 And let’s not even talk about the graphical options on display.

And I’m not entirely sure how to feel about this bit, here? 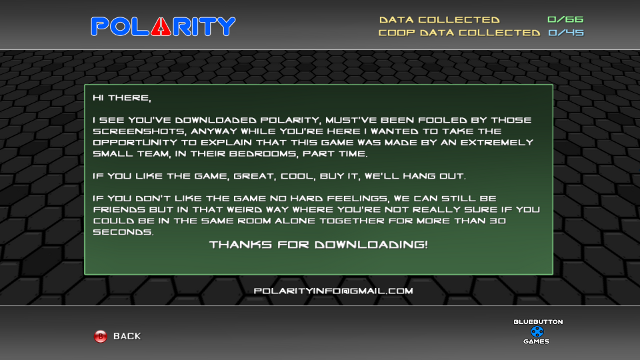 I feel as though the second half of this really shouldn’t have been in the Steam version.

But, alright, enough title screen-bashing. While first impressions are important, the gameplay is always the real measure of a game. Time to check out whether or not Polarity has the chops to carry its strange, low-fi introduction. 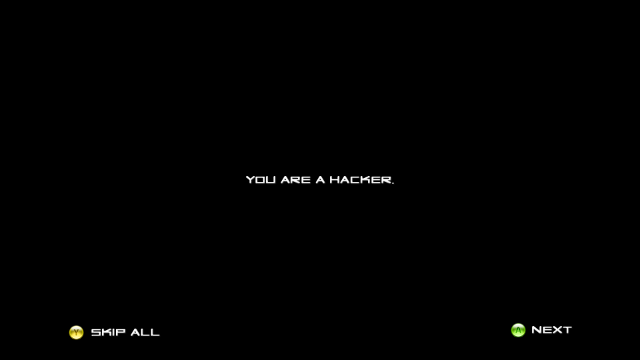 YOU ARE A HACKER, a splash intro screen yells at me, offering Xbox-controller button prompts to proceed despite me explicitly turning those off in the options earlier. YOUR CURRENT CLIENT WANTS YOU TO BREAK INTO A HIGHLY SECURE VIRTUAL VAULT SYSTEM (VVS).

I sit, mildly befuddled, as the white-on-black text yells a few more lines of meaningless backstory at me. THE TARGETS ARE DATA FRAGMENTS CONTAINED IN EACH OF THE VVS LEVEL NODES. A BONUS OF 10.000.000 CR HAS BEEN AGREED IF YOU EXTRACT ALL OF THE DATA FRAGMENTS. YOU HAVE SIX HOURS. – LINUS.

Wait, hold on. Linus? Am I being asked to hack this nebulous digi-bank by the grandfather of Linux himself? Because if so, I take back all negative things I’ve said about this game’s story. I am totally ready to stick it to the Man! -crosoft. Data fragments, you better beware, because Hacker Jarenth is coming for you. 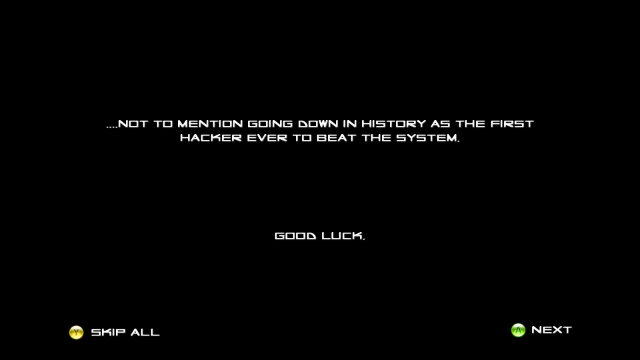 I want to be, the very best… like no-one ever was.

I hit the final Next button, and Polarity pops into actual gameplay mode. 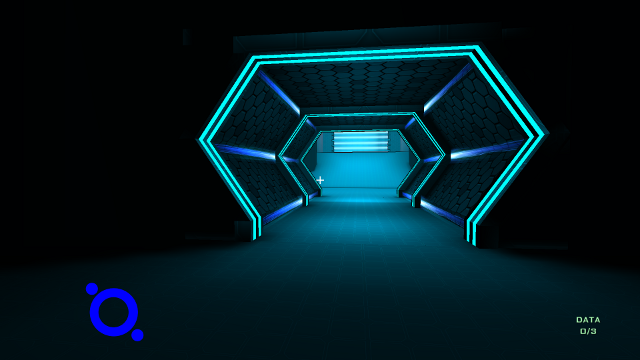 Experience this moment with me, readers.

In front of me, a cyber-future hallway. On the bottom right, a data fragment tracker. On the left, a… blue circle thing. Is this what hacking looks like in this day and age? I don’t know! I’m honestly asking. My knowledge of contemporary hacking starts and ends with Hacker Typer. 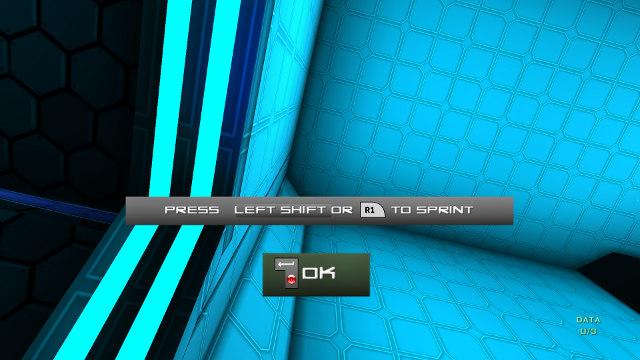 Polarity still explains this in-game, though, which is nice.

At the end of the first hallway, up a little ramp, I run into a grid of red death lasers. I assume they’re death lasers, at least. They have that death laser look and feel. You know what I mean?

Just before I can actually run into them face-first, another helpful Polarity popup appears. ‘Lasers kill you if your polarity doesn’t match! Press Q to change your polarity!’. 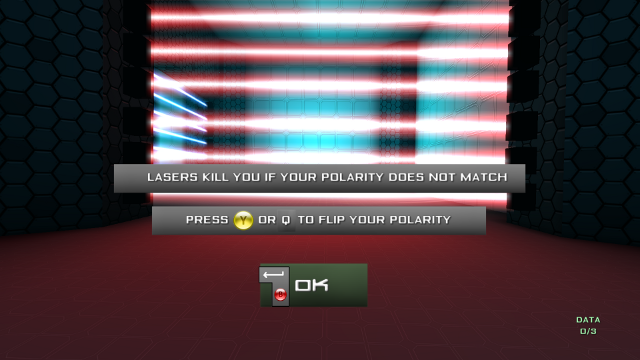 Okay, that’s… that’s good to know. I don’t actually know my ‘polarity’, though. So maybe I’m good as-is? I walk into the lasers, and…

Next thing I know, I fall out of the ceiling a few feet in front of the laser gate. My polarity was not correct.

Alright, so this should be good, then. Full of anticipation, I hit the Q button. And the immediate, visual effect of that command is… that the weird blue circle in the lower left of the screen turns from blue to red. 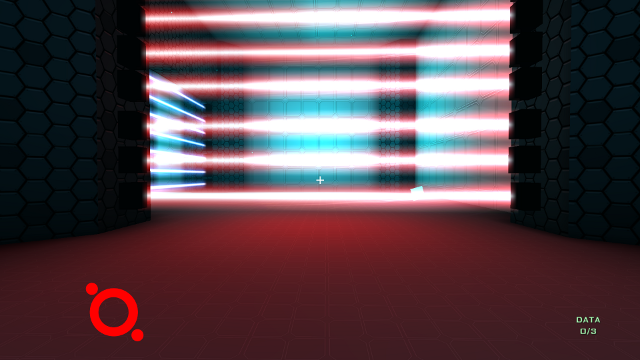 Whelm levels notwithstanding, the red polarity does function as advertised. This time, when I sprint up to the red laser gate, I pass through it as if it were particularly fluorescent air. I’m so satisfied with my newfound immunity, in fact, that I fail to notice the blue laser gate just around the next corner. 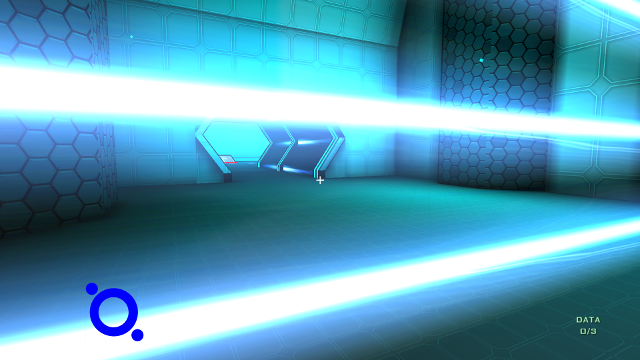 Once past the two laser gates, I meet with my next conundrum. Which is… a black circle with red arrows, lying on the ground. Hmm.

I have no idea what this is.

A white line from the black circle connects it to an arrow ramp, a little off the side. Beyond the ramp lies a chasm, one I can’t possibly jump myself. And beyond that chasm… a data fragment! One of my sixty-six tickets to wealth, fame, and glory!

Obviously, forward is the way to go. But how? Polarity remains strangely silent on the whole issue. But a lack of direct guidance is no issue for this master hacker… particularly because the area I’m in right now is, like, ten square feet. There has to be a solution somewhere.

And a solution I do find: to the right of my current area, up a few steps and past an impenetrable barrier of blue glass, I find a strange, hovering red cube. Hovering on a pedestal not quite unlike the black circle, in fact. As I approach, Polarity finally decides to help: I’m told that I can pick up these cubes with the left mouse button, and throw them or drop them afterward with left and right. And, crucially, I can always recall the cube to its pedestal by left-clicking on a button on it. 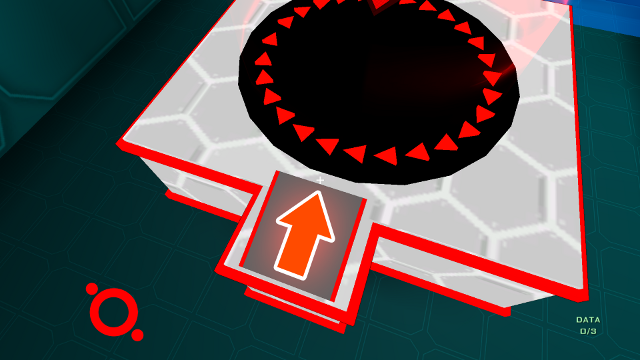 I take the red cube off the pedestal, and it sinks into the ground. I carry the cube to the black circle, and as I release it, it snaps into energy-swirling, colour-giving place. The white line colours a bright red, and when I look back at the ramp, the arrow on it is moving in a forward cycle. Beckoning, almost. And sure enough, once I so much as touch it, I’m catapulted straight through the air. Wooooo! 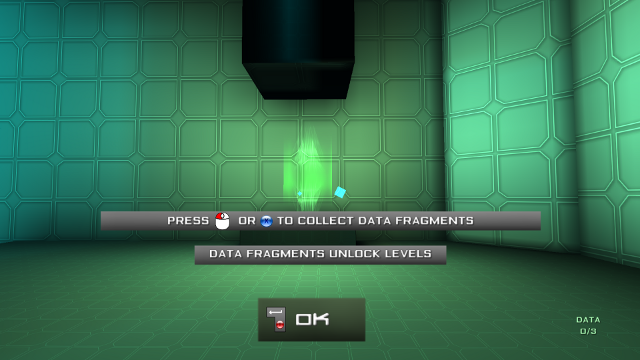 The next hallway over offers a new colour-coded obstacle: light-powered walls, nee ‘gates’. Where lasers would outright kill me if I touched them in the wrong polarity, the walls simply block my passage. In both cases, though, the theme is similar: obstacles influence you if you’re in the opposite polarity, but ignore you outright if you’re the ‘right’ colour. I bite back a remark about racism parallels, and continue onward.

Interestingly, it turns out the light walls are used as more than just walls. In the room beyond, horizontal walls serve as makeshift platforms. Here, I actually want to be the ‘opposite’ colour: jumping on a blue wall-platform in blue polarity leads to me falling through, to my death, into the strange blackness beyond.

Also interestingly, I learn that the power cubes apparently obey the same rules I follow with respect to colours. A red cube I pick up nearby rests comfortably on a blue platform, but falls straight through a red one. And when I throw it into a blue laser wall… well, let’s just say it’s good that these cubes regenerate. 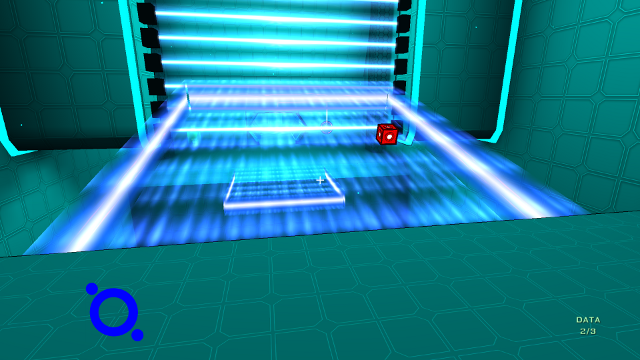 This puzzle is also the first interesting timing-related puzzle I’ve found: I have to run across the platform in red mode, jump, switch to blue, pass through the lasers, then switch back to red before I pass through the second blue platform.

One more red cube lock and one more data fragment later, I find myself face-to-face with a shaft of blue light. The level exit? I think it might be. 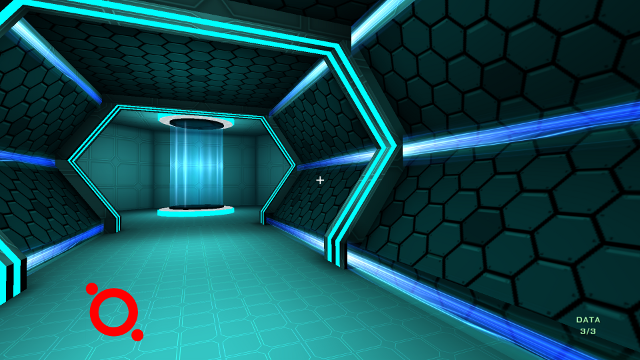 It looks like a level exit, is what I’m saying. 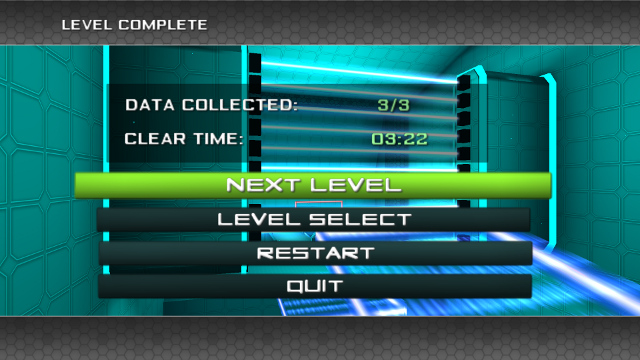 And hey, look at that!

Well. That was definitely interesting! Fun, too. Polarity’s core mechanics feel like they could be put to interesting effect. And while the first levels fragments were relatively straightforward, I can see the process of hunting these things down becoming a major gameplay driver as well. Already, in the second level, I discover that getting one particular fragment requires a little more peripheral vision and lateral thinking than just ‘speed through the level on maximum overdrive’. 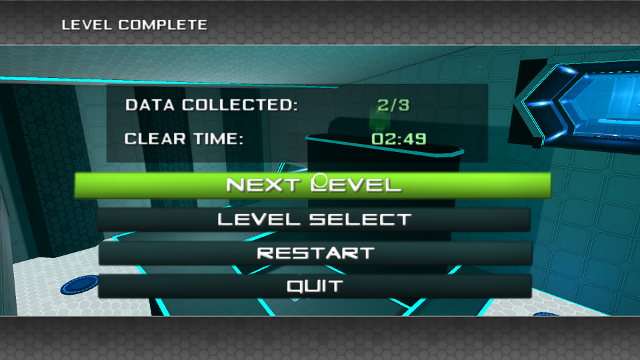 I missed one fragment the first time through this level. Can *you* see where it is?

I’m gonna continue hacking some more… whatever these levels represent. Data nodes? Sure, let’s go with that. Whatever gets me my sweet, sweet fragments. Be back when I’m the world’s #1 Top Hacker!