Someone once said ‘Hell is other people’. They were right. Specifically, Hell is trying to align a bunch of other people’s schedules so that they can all get together and play a game. Honestly, don’t they have a sense of priorities? One of the most common complaints from RPG players is the difficulties finding time when everyone is free. To play D&D, you likely have at least four people together, maybe as many as six or seven, for hours and hours. An RPG that sidesteps all of those logistics is almost a wonder in itself.

Murderous Ghosts, by Trauma Games, is a two player RPG that is one of the easiest games to play. I don’t mean in terms of rules, though those are simple, but it’s an RPG that’s for two-players and takes less than an hour to complete. This means that Murderous Ghosts is truly something that can be whipped out at the drop of a hat.

The premise of the game is subtly hinted at in the title. One player’s an explorer who’s wandered into somewhere and gotten lost, the other is a murderous ghost. The ghost assumes a GM-like role of creating the environment and story for the explorer to uncover throughout play. And also tries to kill them because… it’s a hobby? Actually the ghost player will create a reason to be uncovered or hinted at throughout the game for the explorer to puzzle over. You don’t need to go in with an idea fully formed, the game will gradually nudge you towards picking one during play.

Anyone familiar with the old-fashioned ‘choose your own adventure’ novels will feel right at home playing Murderous Ghosts. Each player reads from a book containing prompts and challenges. They might prompt the ghost to describe the surroundings, or the explorer to describe an obstacle in their path. The two books play off one another, allowing both players to contribute to describing the surroundings and setting the atmosphere. 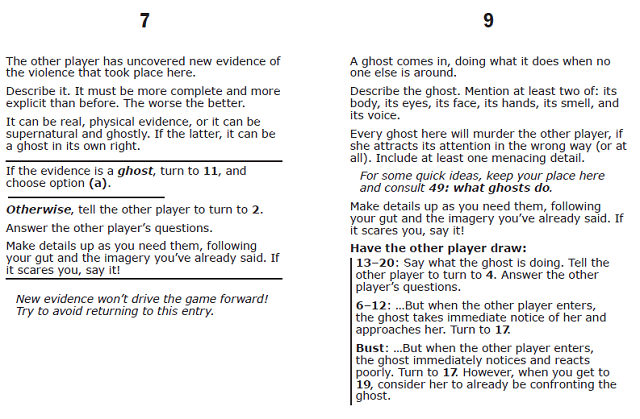 As shown above, the game uses a card game to determine success that basically amounts to blackjack. The closer the explorer gets to 20 without going over, the better things go for them. If they go over, they’re bust and things get worse. It’s simple and easy to resolve, it’s also surprisingly tense at times. The agonizing decision to take another card and risk going bust does help to build the atmosphere during the game. Simple, but effective.

What doesn’t work quite so well is the game that determines that explorer’s overall progress. Throughout play, the ghost player will be drawing cards that symbolize how close the explorer is to escaping. Once they have a card of each suit, or 7 cards in total, they can escape the haunting ghost. It works fine though it can be frustrating to have your story end due to terrible luck alone. Your adventurer is fragile so the gulf between getting the right 4 cards and getting 7 cards in total is a vast one.

Which brings up to perhaps the biggest issue with Murderous Ghosts. Having only two players makes this game a very delicate illusion, it’s very easy to shatter the atmosphere you’re attempting to build. All it takes is for your mind to wander or for you to become frustrated at your luck and you’ll be pulled out of the experience faster than seeing a Stan Lee cameo. Horror is a difficult atmosphere to maintain and I’m not sure whether having two players helps this or not. This is not to say that Murderous Ghosts doesn’t facilitate that atmosphere, it does so surprisingly well. You’ll be flying by the seat of your pants, creating a story for your vengeful ghost or trying to survive as the explorer, and it is exhilarating if it comes together. But that can be a big ‘if’ depending on who you are.

Ultimately, whether or not this game is for you hinges on that ‘if’. If you think you can get into the atmosphere, and have someone else who can do the same, then I’d absolutely recommend you pick this one up. This is a delightful evening’s entertainment and most of the time you’ll get two playthroughs out of it when you bring it out, once as a ghost and once as an explorer. This isn’t the only game to fill the two-player niche but it is a good one to have.

Murderous Ghosts is available for download for $5 USD from Night Sky Games.