And now for a game you’ve very likely not heard about: Sunset, latest opus of developer Tale of Tales (previously known for their work on The Path). The email that offered me a Sunset review code was notoriously sparse on detail: all I could pick up were bits and bobs about a civil war, an apartment, and… cleaning house? Nevertheless, the game’s modest Kickstarter managed to entice enough people and investment to see it made. And while I probably would’ve found out about the game anyway, I’m not one to pass up on this rare opportunity to play a new game entirely free of marketed preconceptions.

Sunset, then. What am I getting into?

Very, very first impressions: this is what Sunset deems important enough to open itself with. 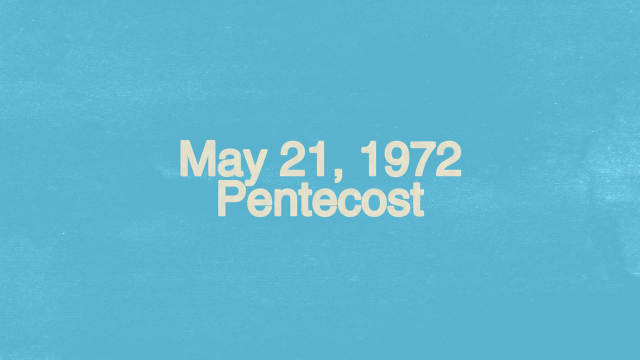 Answering the hard-hitting question ‘what day is it right now?’

Past the calendar hijinks, Sunset’s actual opening screen slash main menu is… I think it’s an elevator? A 1970’s elevator, with wood paneling on the side and enormous hand-labeled buttons. A paper note taped to the wood lists a few household chores, and the burnished metal of the left-side door reflects the image of a black woman with a voluminous afro. 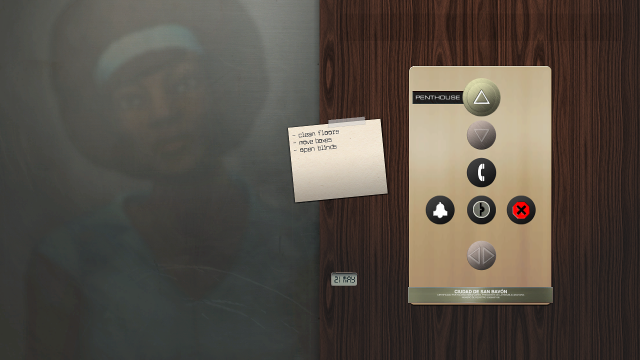 Checking the buttons… the up arrow takes me to the penthouse, and (I assume) starts the game proper. The down arrow is greyed out, presumably because I am down at the moment. The phone button opens a diary of some sort. The red cross exits the game. The key slot provides a massive slate of options, all still presented in-elevator-character. 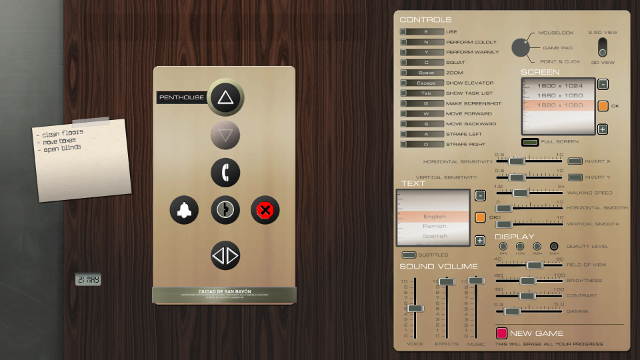 Normally I’d talk about these options in excruciating detail, but this is all looking pretty self-explanatory.

Finally, the bell icon opens up a set of how-to-play instructions. This is split into two sections: ‘Controls’, which explains more or less exactly what you’d expect, and ‘Play Instructions’, which… seem to be telling me how to play ‘in spirit’? Here, I’ll give you a few choice lines from the Play Instructions:

“Sunset is a first person exploration game. The purpose is to immerse yourself in its fictional atmosphere and discover the story that is unfolding as you play.”

“Every week you, as Angela Burns, an American tourist stranded in Anchuria, a fictional Latin American country in the midst of social and political turmoil, visit the apartment of the wealthy Gabriel Ortega to do housekeeping while he is away.”

“What you do and how you do it is entirely up to you. We recommend you roleplay as Angela and consider what her choice would be. There is no reward for doing your work but everything you do influences the story in subtle ways.” 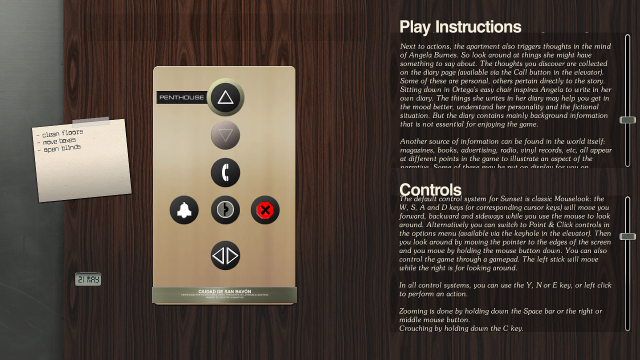 And so on, and so forth. This thing honestly goes on for a *while*.

Clunky a method though it may be, I guess the scene is well and truly set at this point. I am: Angela Burns. I am currently in: the elevator leading up to Gabriel Ortega’s apartment. I am to: clean his apartment to the best of my judgement and ability, taking into account the note he (I assume) put up for me to read. The larger socio-political context of the country I’m currently living in is: complicated.

Let’s get to cleaning, then.

I hit the Penthouse button. As the elevator goes up, Angela starts talking, out loud. Wait, why are there no subtitles? I’m pretty sure I turned those on. I exit the game and restart, going as far as to delete my entire game to make sure it sticks this time around. 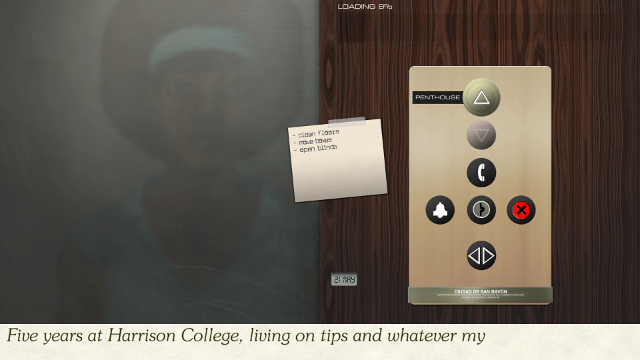 Angela mutters to herself about her schooling, her engineering degree, and the cruel jabs of fate that put her in her current position, as the loading-screen-disguised-as-elevator speeds up towards the penthouse. Finally, it arrives, and the door’s loud opening ping announces my entry to the apartment that will be my digital home. 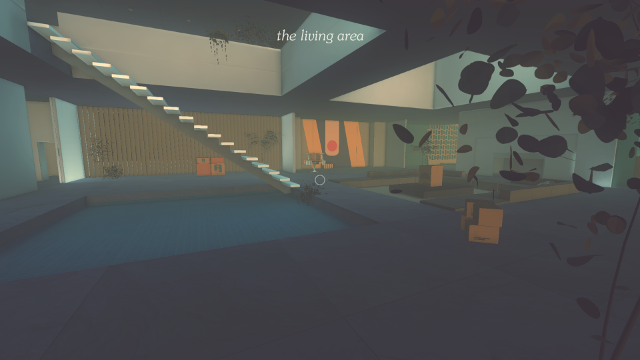 I wander around the apartment for a bit. It’s a two-floor penthouse, spacious and open, with a central staircase connecting the floors. The lower floor has two living rooms, a study, a kitchen, a balcony, and a patio garden. On the second floor, I find two bedrooms and two bathrooms. And a lot of storage doors, hidden here and there. Nice place! 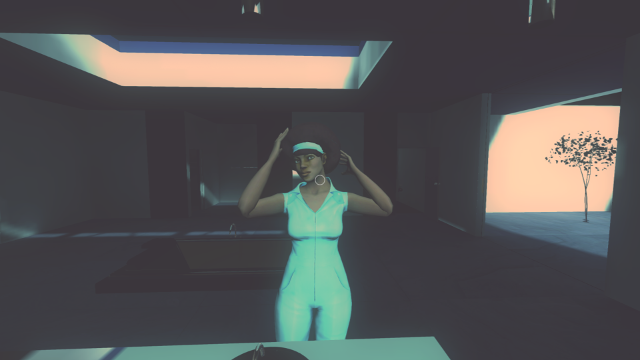 And I’m not looking too shabby myself, either.

Nice place, but a little empty. The rooms are there, and I can tell what they are from little text popups. But as far as furniture and decorations are concerned… it’s all lifeless and grey. Did Gabriel Ortega only just buy this place? It seems like.

As I move through the apartment, Angela-me interacts with the environment in two main ways. First, Angela hmmms to herself whenever she sees something interesting, silently voicing her thoughts through the medium of text box. ‘Hmm, I wonder what Gabriel Ortega is like’. ‘Hmm, the city has a new energy to it’. ‘Hmm, I could totally unpack these boxes’. ‘Hmm, if I zoom in on the books lying around the place, I can read and collect the titles’. 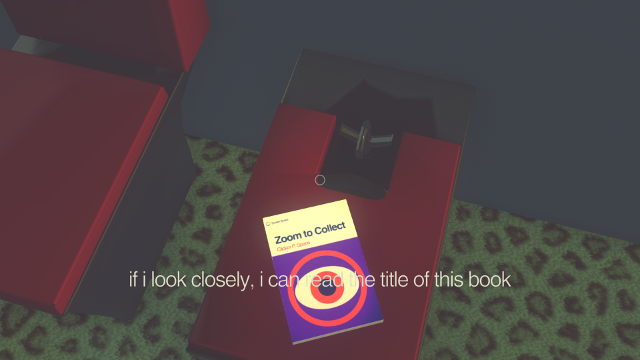 And second, getting close enough to certain objects around the environment triggers a little interaction popup. Mouse over the light switch, and I can press E to turn on the light. Mouse over a box, and I can unpack the box. Mouse over a chair, and I can sit down in the chair. You get the idea.

Sometimes, these interaction circles are white. Neutral, non-normative. But sometimes, they’re not: the interaction circles can also be orange or blue. From the How-To-Play, I remember that these colours have meaning: orange-circle actions ‘drive the relationship between Angela and Gabriel more towards the romantic’, while blue-circle actions ‘keep the relationship more neutral’.

In some cases, the two circles are presented as a choice. One of my given tasks today is to ‘clean the floor’. But mousing over the cleaning supplies presents me with two options for doing so: either ‘efficiently mop and disinfect the floors’, or ‘carefully vacuum the floors, and spray a bright scent into the air’. I can select my chosen option either by pointing the mouse at just the right pixels on the screen, or by using Y or N to go for orange or blue, respectively. 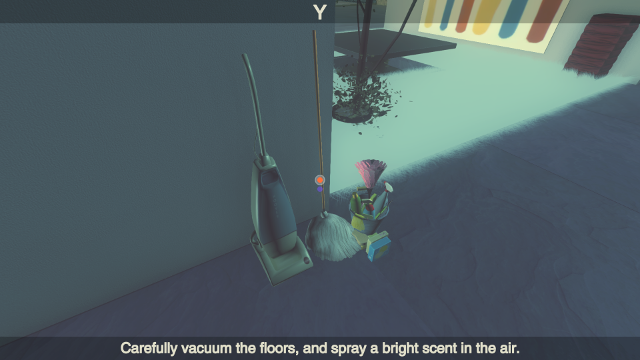 In other cases, the options are just inherently normative one way or the other. Turning on the lights is an orange option, for reasons I can’t entirely figure out. Closing the blinds is a blue option. Sitting down in Gabriel’s lazy chair and writing my diary is oriented neither way, but doesn’t really reflect well on my housekeeping aesthetic either. 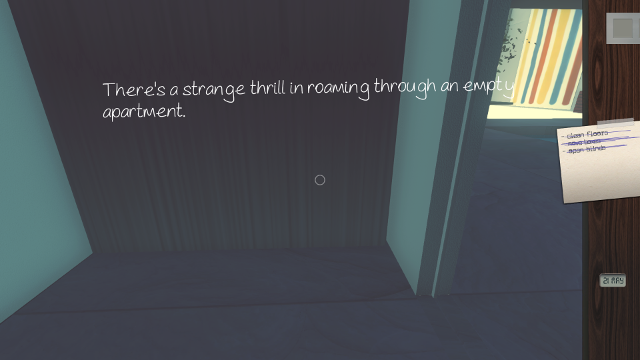 No, but this is a thing that actually happens.

I wander through the penthouse, hunting for the interaction spots that’ll let me do my assigned chores and ignoring most everything else. I mean, I could unpack mister Ortega’s boxes, and help his apartment get settled in all the quicker. But why would I? I’ve decided that Angela Burns is more than a little disgruntled that she, a trained engineering student, is relegated to the role of cleaning lady. Cleaning lady! Is this why we fought for equality and the end of racial segregation? Similarly, I perform all my tasks with decidedly non-romantic efficiency. I’m not interested in playing house, I’m interested in doing a good job and getting paid.

Fast-forward to one week later… 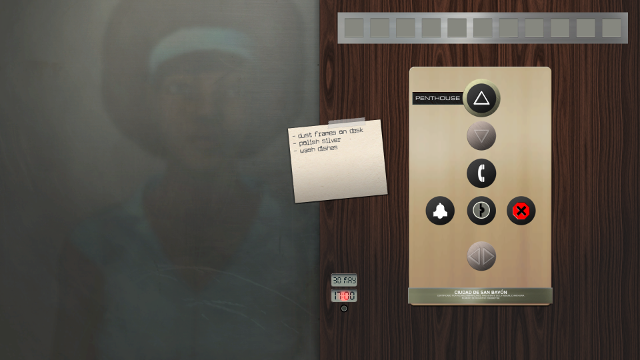 I didn’t get fired, so that’s something!

The apartment I enter this time around feels much more lived-in. It’s still primarily boxes, but at least there’s furniture around now. A chair, a table, a rolled-up carpet… an open hollow globe concealing an empty bottle of hooch. There’s even a record player on display, which I handily hijack to play some music while I work. 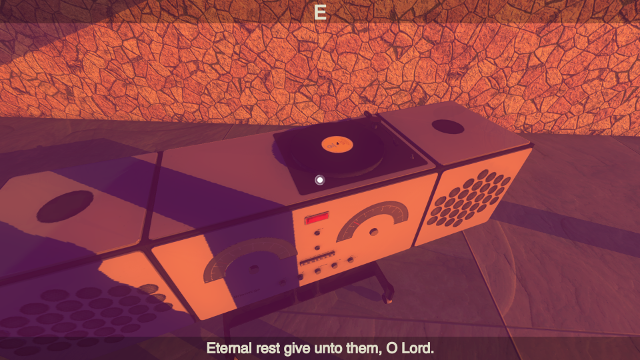 Also unlike last week, the actual passage of time is much more noticeable now. The setting of the sun casts ever-widening shadows into the apartment, colouring it from a warm orange to a deep purple over the course of one in-game hour. Time passes automatically, but doing my chores and sitting down speeds the clock up that much more. Eventually, I sit down in the writing chair, content to take in Anchuria’s high-rise skyline. 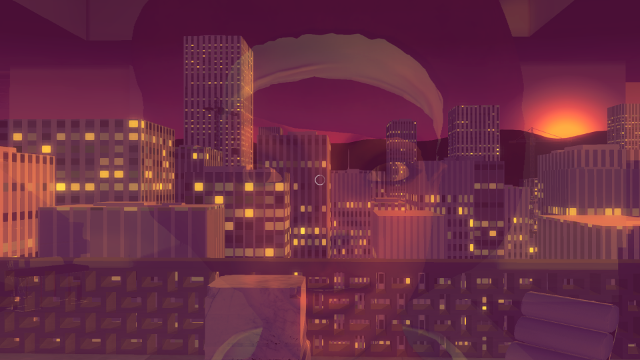 I look at the skyline, and gaze deeply into my own eyes.

Third day, same as the first. Chores, talking, and an apartment that’s slowly getting more and more lived in. Taken by the increasingly colourful and cozy mood, I even give into the temptation to pick an orange option for once! 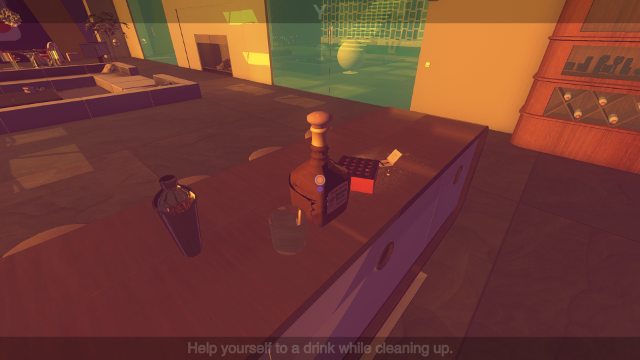 Maybe not for the reason you think.

Existing inside this apartment is also slowly starting to give clues about the state of the larger world outside. Apparently, there’s been a change of government in Anchuria recently? The current regime is being led by one ‘Generalissimo Ricardo Miraflores’, now ‘President Miraflores’. Angela has little good to say about the new president. Ortega, I think, may not be a fan either. 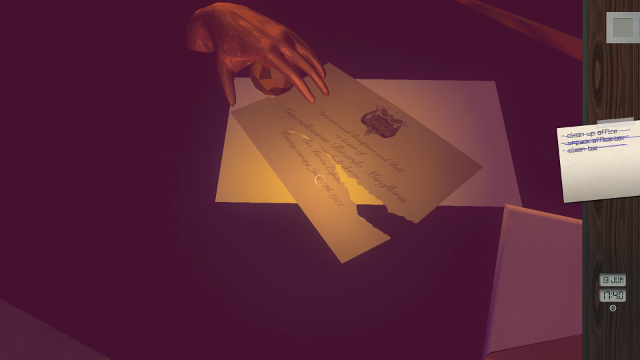 Then again, he *does* actually get *invited* to these things. Maybe the rip was an accident?

I wish I could just ask mister Ortega what he thinks. But that’s impossible, isn’t it? After all… 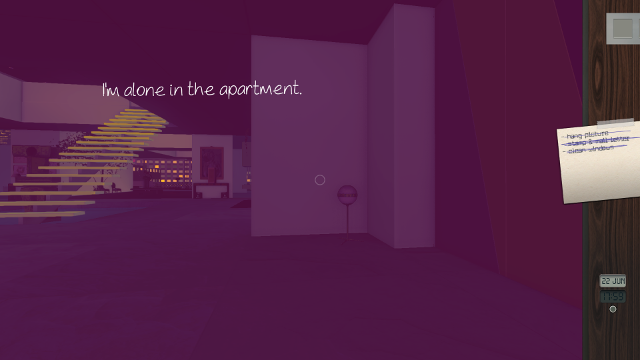 And so my work continues, day after day, week after week. It’s dull work, and seemingly thankless. But hey! At least I actually have a job.

And hey, who knows! Just because I haven’t met Gabriel Ortega yet, doesn’t mean it can never happen. I’m sure he’s as curious about the person cleaning his apartment every week as I am about the man living here. We’ll see if I run into him.

One of these weeks.