Heya, readers. Due to a planned temporary outage of the Jarenth Content Creation and Delivery System — i.e. because I knew I was gonna be drunk and hungover this weekend — you get a shorter Indie Wonderland this week. Specifically, I’ve been meaning to write a few words about Four Quarters‘ Please, Don’t Touch Anything. I stumbled over this game on Steam a few weeks back; the interesting name caught my curiosity, and the rad pixel art style evident from the Steam page caught my attention, to paraphrase Leonardo DiCaprio.

Please, Don’t Touch Anything is an interesting little game. But its short length and spoiler-sensitive nature precluded the full Indie Wonderland. As such, I’ve been sitting on this game for a while, waiting for an applicable rainy day. Or booze-y day, as the case turned out to be.

Please, Don’t Touch Anything has a relatively simple narrative setup. You, the player — a nameless, faceless, genderless entity — are visiting a friend at work. It’s a little unclear what your friend’s work actually entails, but it involves a large, grey machine with a single red button. 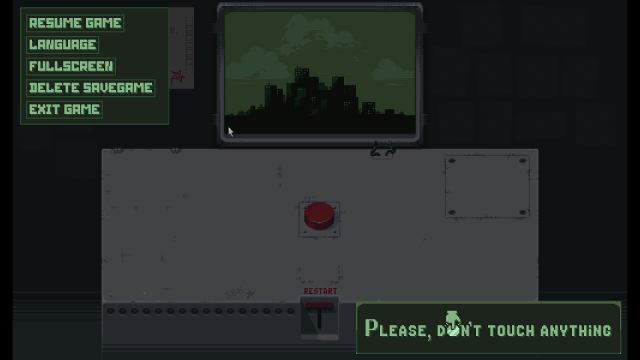 And a red lever on the front.

As the game starts, your friend scurries off to the bathroom to answer an urgent nature’s call. They ask you to watch the machine for a bit, and caution you not to touch anything. 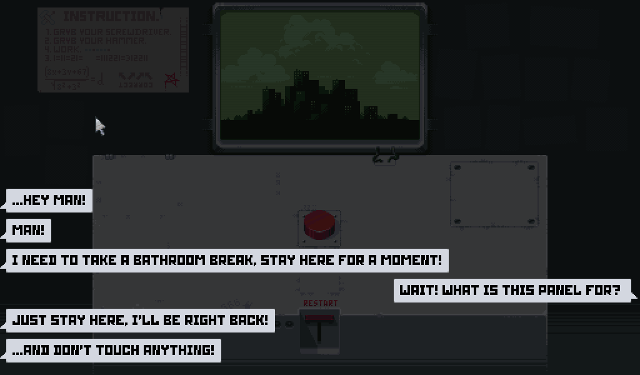 They know you too well. 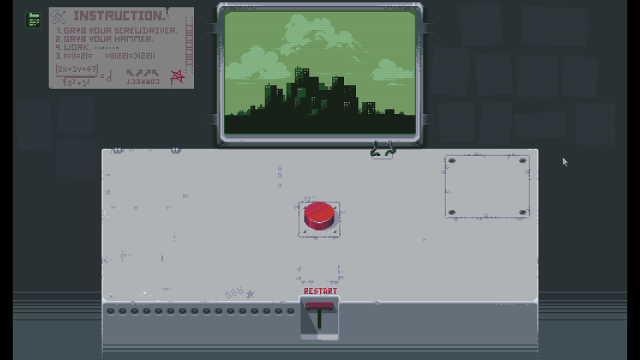 This is the game.

Please, Don’t Touch Anything is a fascinating study into the conflicting human drives of curiosity and altruism. You’ll want to touch the machine. Yes yo do. Don’t tell me you don’t want to push down on that giant, inviting red button. Nobody likes a liar. But on the other hand, your friend very specifically asked you not to do that.

And while pushing the button might give you a temporarily little dopamine boost, a rush of ‘ha, look at me being a rebel!‘, you don’t know what the consequences to your friend would be. Maybe you’d break something! Maybe your fiddling with the expensive machine ruins some process, or sets off some chain reaction somewhere! Maybe your friend will get fired, or sued, or sued over being fired! Maybe your uncontrollable fiddling is the trigger for tragedy, ruination, and the destruction of everything around you! 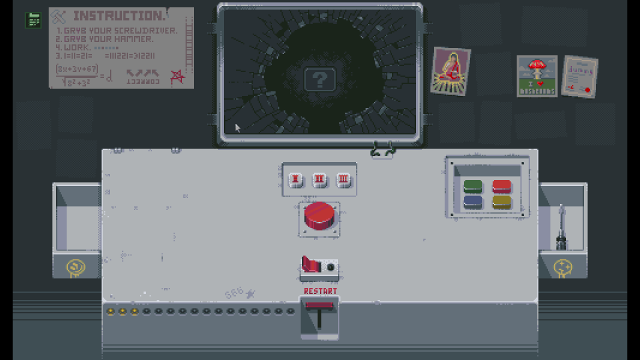 Starting with the machine itself!

You’ll want to, but you don’t.

Resisting that burning human drive to face the unknown head-on with nothing but a smile, you have no choice but to not touch anything. It’s hard, I know. It was hard for me. But you draw inspiration where you can. For me, the power I needed came from famous actor Mr. T’s lesser-known ‘moral rapping’ phase:

It’s rad, and awesome, to follow the rules.
And people that break ’em? I pity those fools!

Anything to help you resist the urge to touch something.

Please, Don’t Touch Anything’s core conflict never really abates in strength. It’s not a game for the faint of conviction, that’s for sure. But simultaneously, it doesn’t really last long: after only a few minutes, your friend returns, and the ordeal is at an end. 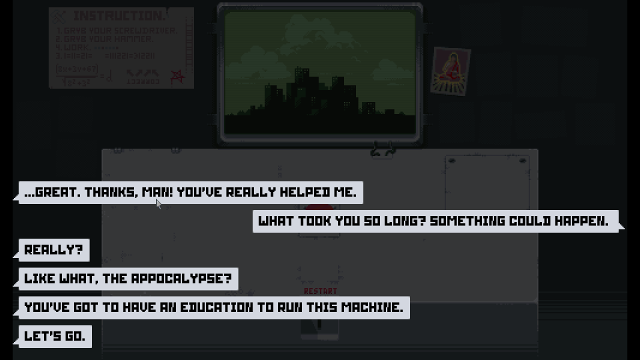 They knew you well enough after all, I guess!

Some of your curiosity may remain even after completing the game. What did that machine do? You’ll start wondering, imagining, daydreaming, about the machine’s single red button being a gateway to a whole realm of puzzles. Buttons, levers, tools, all flipping in and out of view, all requiring an innate understanding of the various clues hidden on-screen! You’d have to understand that nothing you saw was ever accidentally put there: that every word, image, and element on the machine and the machine’s guiding poster was another hint to unlock more and more of the gargantuan mechanical master’s hidden depths. 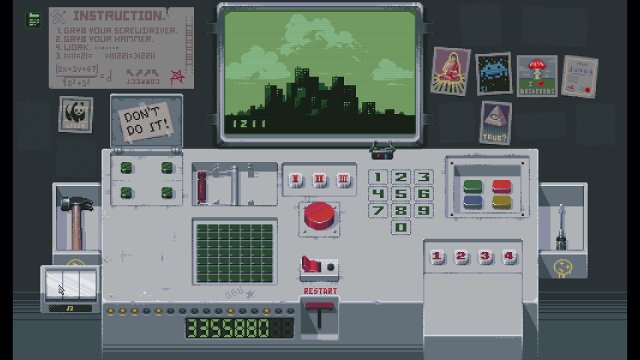 And the results? Well… 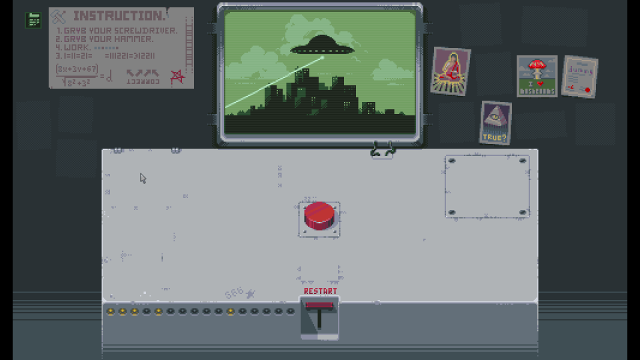 They could be many. 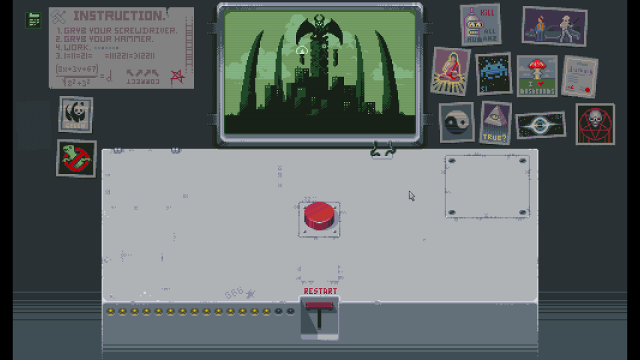 Except none of that is real, of course. It’s just a coffee machine. 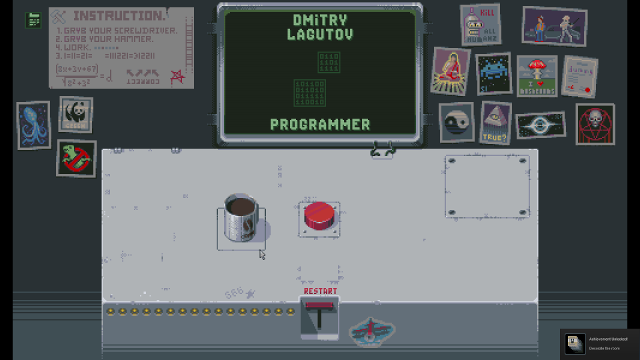 Please, Don’t Touch Anything is an exploration of just how far the human mind is willing to go to attribute meaningful consequence to intrinsically meaningless situations. It puts curiosity and the hidden promise of magical wonderlands opposite to trustworthiness in the face of a friend. It’s a game that will teach you something about yourself. For only five Steam bucks, you too can find out whether or not you’re the kind of person who would keep their word in situations of alluring uncertainty. I, for one, am glad I fed myself into this crucible of boredom: I’ve emerged from the other side a better man, stronger, more convinced of my own mental fortitude.

And all it took me was not touching anything.

No matter how much the machine’s siren song appealed to me.

Jarenth will pursue any and all libelous statements to the effect of ‘you totally touched that machine’ to the full extent of his capabilities. Which is to say, he’ll be really grumpy about your lack of trust for a minute. Support his steadfastness on Twitter or hang out with him on Steam. And if you dig Indie Wonderland and Ninja Blues in general, why not consider supporting our Patreon campaign?