This is an unusual one. Part tool, part RPG, this game is certainly unique and might be my favourite one-shot to put on the table. What is Microscope? Simply put, Microscope is about building a timeline… no, wait! Don’t leave! I swear this isn’t a trick to get you to do your history homework. Microscope is a game about building a fictional timeline. Any genre or tone can be accommodated in your attempts to remake history in your image. Or you would if it wasn’t for those meddling friends, why did you invite those guys anyway?

RPGs often have a massive problem with information imbalance. Usually the GM who created the world knows everything about everything, while the players bumble their way through without a sense of context. Depending where you’re sitting, hilarity or tragedy then ensues. Nothing is weirder than a elven character having no idea about a war their kingdom is engaged in, or a psyker not knowing he’s part of a persecuted minority. Microscope solves that neatly by having everyone at the table take part in making that history. This both shares the creative load and serves as a way to give the information to the players without handing them a novella.

Even if you never use the timeline for an RPG, it’s a great experience for almost any number of people. I’ve played this with between two and ten people and it’s always been entertaining. Sure, it tends to drift more towards silliness as the numbers increase, but an RPG being humourous has never been a bad thing.

So how do you make a game out of making a timeline? Firstly, you pick a broad theme that you’ll be exploring. These are deliberately vague and serve only to give you a gentle direction for the rest of the game. Then you take turns to draw up a list of elements to include or ban in your game world. This will be the part that will require some negotiation between players and answer many of the setting questions. Is magic in or out? Advanced technology? Monstrous creatures? Anything can be put in or, if you’re sick of a particular trope, ruled out from the game before you begin play. It’s a nice and necessary feature that will ensure that your setting is interesting to everyone around the table. If you’re using Microscope to set up a larger campaign, you’ll already have a good idea what goes on each list, and this stage will mostly be refining your ideas.

All of the above is only the setup to the meat of Microscope’s gameplay. The majority of your time will be spent constructing your timeline, placing down periods, events and scenes to increasingly focus on the details of your shared history. 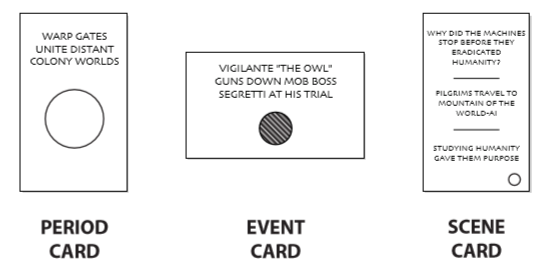 Focus? Increasing detail? Ohh, I just got it!

By this point people are probably asking what makes this an RPG. The answer is the scenes. While periods and events are simply placed down by a player, when someone places a scene they instead ask a question. Everyone around the table then collaborates to create an improv roleplaying scene that answers that question. This is a great way to bring everybody into the creation, giving them a chance to voice their opinions and ensuring everyone has a stake in what’s going on during other people’s turns. It’s very rare to play the same character twice, so it rarely feels like you’re stepping on anybody’s toes, whatever the decided outcome.

In fact, the nature of the collaboration is a fascinating thing to watch unfold. Since you don’t have to place cards down in a sequential order, the ability to hop around the timeline lets people develop whatever interests them most. A friend nukes your city? Who cares, you can just develop its history before the bombs fall. Even if someone ends your story in tragedy it doesn’t necessarily feel like an intrusion, since you don’t lose the ability to develop what interests you. Unlike party-destroying fights in other RPGs, it’s rare for someone else’s vision for the timeline to prevent you from exploring yours. 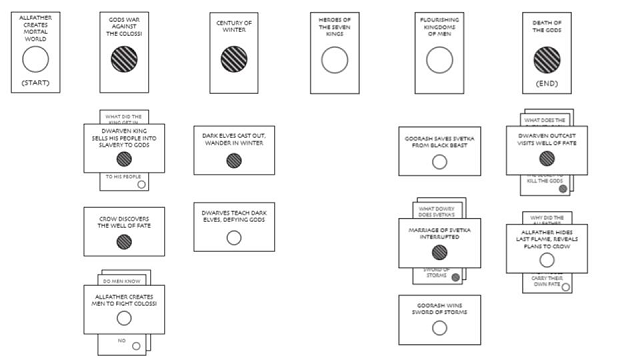 A game in progress. Individual results will vary. Wildly.

If there’s any point to criticise about Microscope, it’s that it tends to be roleplaying light. Scenes are time-consuming and since there’s the option to simply narrate them, there can be a tendency to solve things by simple declarations instead of roleplay. It depends on what mood everyone is in as to whether or not this ends up being a big issue: sometimes you just want to mess about with friends rather than take part in any dramatic stuff.

It’s pretty clear that I’m enamoured with this game and, as I said, it’s one of my favourites to bring out whenever a one-shot is required. It’s simple, fun and easy enough for even complete beginners to give it a go. Even if you don’t play RPGs, this game might be worth introducing to your board game night. But if you’re using it to prepare for your next campaign, you’ll find that it helps each player start out with the complete backstory of your shared world as well as investment in all the plot hooks that they helped create. If you’re a lazy GM like me, it’s a win-win scenario. And if you’re a player, it makes sure that you get your chance to introduce your favourite ideas into the campaign before it even starts.

Microscope is available for download from Lame Mage Productions and DrivethruRPG from $10 USD.