Hey everybody. I made it to the top of the tower! It took a while. There were many robots involved. 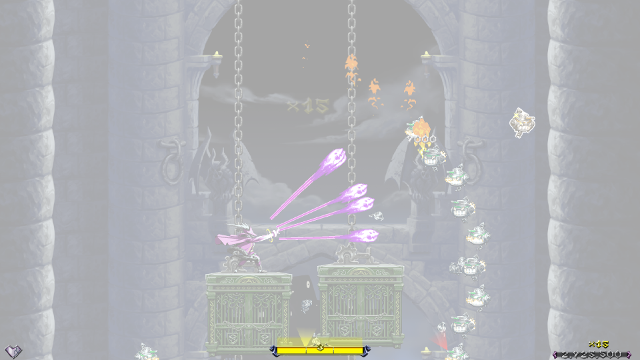 And, consequently, many explosions.

At the top of the tower, I fought the glowing orb from the intro. And after that, a little purple man with a V-for-Vendetta mask who introduced themselves as “It’s a me, Vario!” 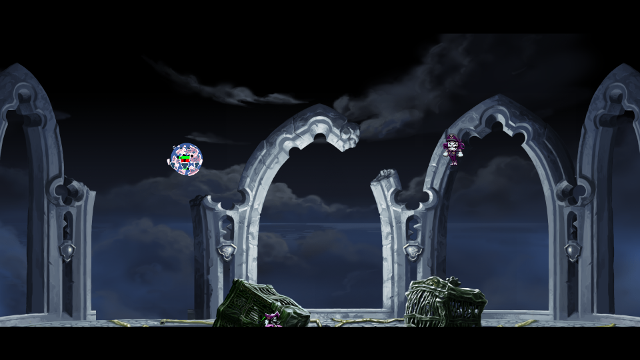 This, too, was quite strange.

And after that, stuff started getting really strange. 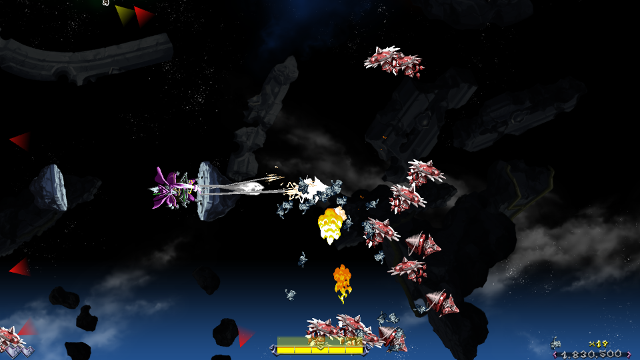 Even gravity stopped trying to figure it out.

I think I got pretty far into Savant. Farther than I initially expected, for reasons I’ll get into later. Not to the end, judging from the space samurai robot I have yet to beat, and I don’t think I ever will. But that’s more a lack of time, and not necessarily a lack of want.

I had decent fun with Savant! It’s a small, relatively short game, but good-looking, polished, and entertaining. It presents a relatively simple limited-movement twin-stick-shooter experience, so if that’s not your cup of tea, this is really all you need to know. But it presents this experience well, for those of you who are actually into this sort of thing.

I mean, what more is there really to say? The core of Savant is shooting many robots to various soundtracks of electronic wub-wub. The ‘main story mode’ progresses through something like five levels: each level plays with the enemy type and placement and with your standing locations a little, but three out of five levels essentially boil down to ‘shoot all the robots before the robots shoot you, or start the current level again’. The other two levels are boss fights, which play with the positioning element a little more, trading ‘shoot all the robots’ for ‘shoot this particular robot in a particular way a bunch of times before this robot shoots you’. 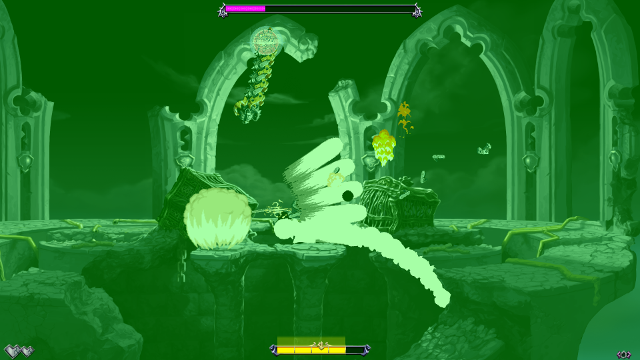 Lots of colourful shooting is involved either way, though.

Savant actually has three more game modes, unlocked automatically after reaching certain waypoints. Time Attack is a pretty straightforward romp through the core levels, except with the added impetus of a timer and only one set of three lives for the whole deal. Endless Mode puts you in level 2, the ascending escalators, facing you off against an ever-increasing wave of enemy monsters for that highest of score. And the slightly confusing ‘Vario Mode’ alters the gameplay mechanics in strange and disorienting ways. 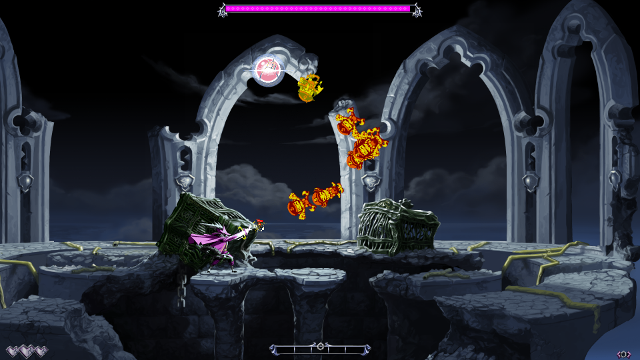 As a rule, twin-stick shooting lives or dies by the tightness of its controls and the spectacle of its action. Savant has both elements down pretty well. I hope my screenshots so far have demonstrated the spectacle angle pretty well, but here, just in case: 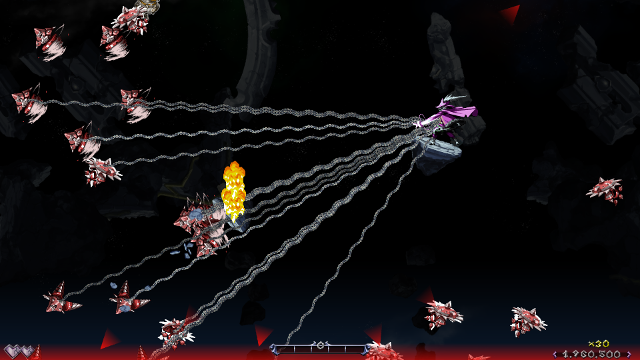 Now all we need is an Alice.

And Savant’s core controls work well enough. The difference between rolling between spots and jumping between spots felt a little off, sometimes: on the gamepad, that difference is literally only the angle at which you push your analogue stick. On mouse and keyboard, the WAD controls (S has no place in this game) feel a little more responsive. On the other hand, the analogue stick shooting the gamepad offers feels more direct and responsive than aiming and clicking with the mouse, so either control scheme has its ups and downs. In either case, the biggest mechanical difficulty Savant has is the fact that aiming drags your camera around: you can never see the whole of the field you play on, only the section Savant is looking at. And that’s a feature, not a bug.

From humble beginnings, Savant’s controls slowly get a little more complex with the new abilities you unlock through golden CDs. Still, most of these abilities are explained pretty clearly… 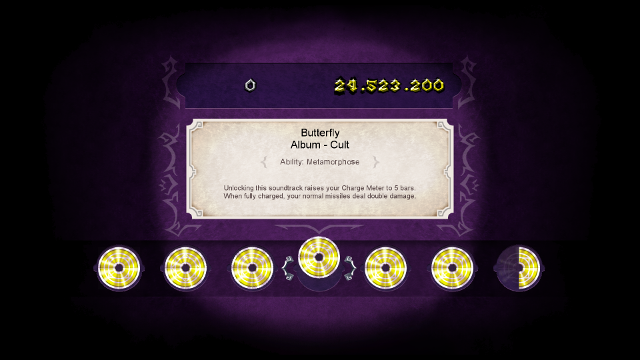 …even if some of them take two or three readings to understand. 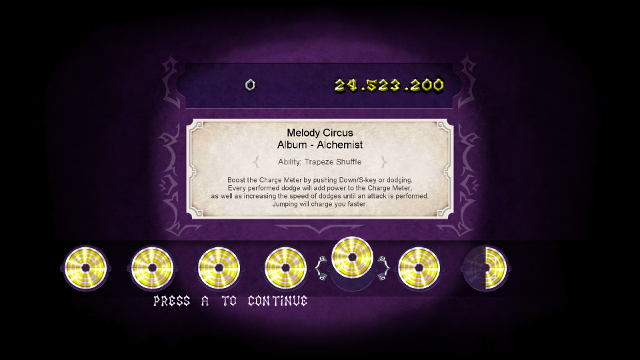 Although the golden CD drop system makes it seem as if power ups are handed out randomly, the truth is a little neater. Each of the five main levels, and the Endless Mode level, holds a maximum of two full golden CDs. ‘Grinding one level over and over for all the powerups’ isn’t really an option, then. Neater still, during play, I had the strong sensation that each level’s difficulty is predicated on the level of power you’ll have after getting that level’s powerups. Rather than allowing you to blast through some levels and halt on others, Savant seems to try to make sure that you earn, and learn to appreciate, each increase in power. And I’ll be honest: it felt good, the first time I was able to use my double-damage shot barrage to clear the elevators without a hitch.

Which makes it all the more baffling that the game’s final layer of player power is hidden behind like three layers of subterfuge.

For the longest time, it seemed that my review was going to end at ‘and then I reached the floating rocks stage, and I couldn’t progress anymore’. The floating rocks stage is hard. Savant’s two footing points in that level float in space, meaning you’re never entirely sure where you’ll stand or how close to enemies you’ll be. And both rock spaces can be destroyed: unless you’re standing on the space, your shots impact and hit it, and drill-type enemies spawn everywhere to rush into and attack your rocks. Meanwhile, razor blade-type enemies circle around the outer layers of the map, slowly encroaching on your space until you can’t even jump or dodge anymore for fear of hitting them. 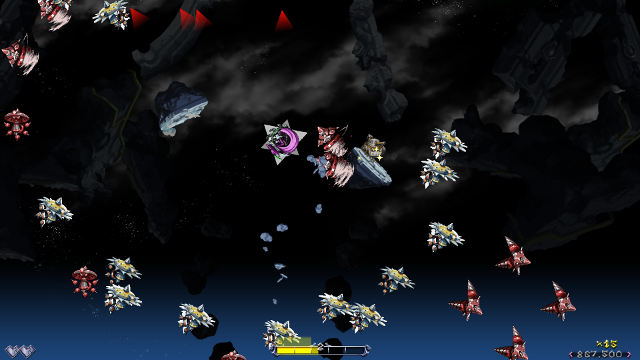 It’s not a fun place, is what I’m trying to convey.

I tried this mission so often. I must’ve put, like, three dozen attempts into it. And I just could not clear it. Even playing as perfectly as I could, even keeping track of every enemy, even using the chain upgrade attack with perfect accuracy, I just couldn’t defeat the enemies fast enough. And because this particular level doesn’t have any golden CDs, it seemed like I just wasn’t destined to move on from this level.

Turns out that there was a power upgrade I hadn’t gotten yet. It was just hidden. Hidden in plain sight, in a previous level, but still hidden well enough that I would never have found it, had it not been for a chance misclick on my end. 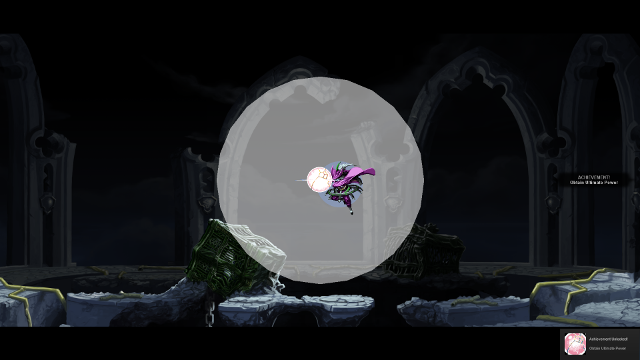 Consider this as spoiler-free a hint as I can give.

And even when I got the powerup, I didn’t actually know it was a powerup. This particular one doesn’t play by golden CD rules: it has no soundtrack, and no title card offering easy explanation. It wasn’t until I randomly checked out Savant’s achievement screen… 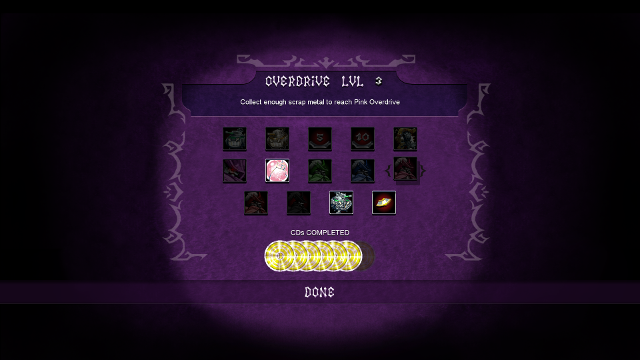 …which, incidentally, scores kudos for *not* being a link to the Steam achievement page…

…that the gears finally clicked. 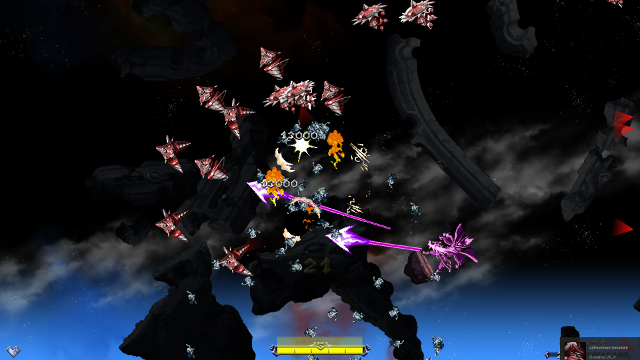 And then I beat the level in one go.

I honestly don’t understand why this particular upgrade, as necessary for progression as any other one, is hidden this craftily. I certainly didn’t feel very good when I ‘discovered’ it. Maybe this is related to the ‘Void Update’, that’s plastered all across the game’s website? Maybe Savant Original actually ended on the top of that tower? I don’t know. What I do know is that regardless of development history, it’s kind of a crappy move to hide progression from your player like that, this sudden.

That complaint aside, though, I find I can’t really say a whole lot of bad stuff about Savant. It’s a kind of game I respect a lot: simple, focused on being what it wants to be, flashy, entertaining, cool. It has time leaderboards and score leaderboards both, for those of you who are interested in chasing those. The pixelated art style is pretty easy on the eye, and there’s enough flashy particle effects to effectively distract from the fact that there’s, like, five enemy types. And the music… I keep calling it electro-dubstep, but it honestly also has some chiptune influences. If you really detest this kind of music, you might not like Savant much: you can turn the music off, of course, but it’s very much a game that relies on audiovisual bombardment for the full experience. Otherwise, I really dig the freedom to pick and match your own soundtrack in each level. I personally found myself listening to the Trapeze Artist upgrade track the most, but to each their own. 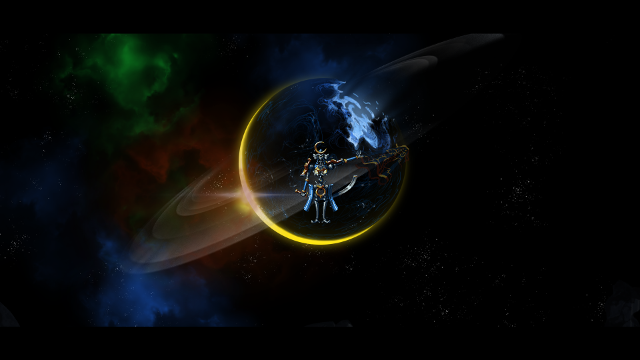 Unless you want me to spoil the robot samurai.

I think I’ll put a couple more play sessions into Savant. Chase my own highscore, and those last elusive achievements. See if my opinions on it drastically change. 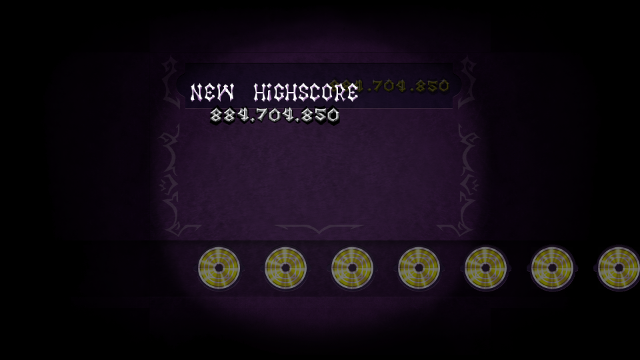 Though I did reach that last Overdrive level, allowing me to *pulverize* my own highscore.

I’ve said more or less everything I have to say on Savant: Ascent, I think. It’s short, sweet, and to the point: focused, flashy, noisy, explosive entertainment. If you hate this genre, you won’t like this game either. If you don’t hate this genre… This might be as good a time as any to mention that Savant can be purchased on almost every major platform — Steam, Humble, GamersGate, Apple, and Android — for something in the vicinity of two dollars? Yeah, I didn’t even know it was that cheap until now. Certainly explains the length, for one. And it makes the game’s polish, soundtrack, and general entertainment value even more impressive.

If you like chippy electro-soundtracks and shooting robots with chains until they explode, you could do a lot worse than Savant: Ascent. And I guess that’s as good a sentence to go out on as any.

Jarenth loves shooting robots! And building robots, and talking to robots, and hanging out with robots… Talk robots with him on Twitter or hang out with him on Steam. And if you dig Indie Wonderland and Ninja Blues in general, why not consider supporting our Patreon campaign?