Like one or two games I’ve reviewed before, Savant: Ascent (from here on out: Savant) is the kind of game that serves as a perfect example for the gaming times we find ourselves in: a game I totally don’t remember buying. Collateral of some capital-b Bundle purchase or another. I wouldn’t even be able to tell you what bundle it was: cursory Gmail study reveals I’ve received no less than four bundle email offers including it. And while I think I vaguely remember buying a particular Humble Bundle mostly for Savant, I also know enough about memory to accept that half-formed retroactive dream-thoughts have less predictive value than tea leaves.

Savant is a game by D-Pad Studios, a small international development studio that seems to love their pixels. And looking at the website reveals very little about the game itself, save that Savant’s main elements appear to be pulsing music, space samurai, and the colour purple. How do those things a game make? Beats me, readers. Let’s find out together.

(Game source: Purchased it myself. I think.)

I dig Savant’s title screen. I’ve already picked up on how this game involves music in its mechanics. And you know what this title screen promises me? With its giant spiked letters, with its gothic font, with its iron pipes and steam and electric glow? It promises metal. 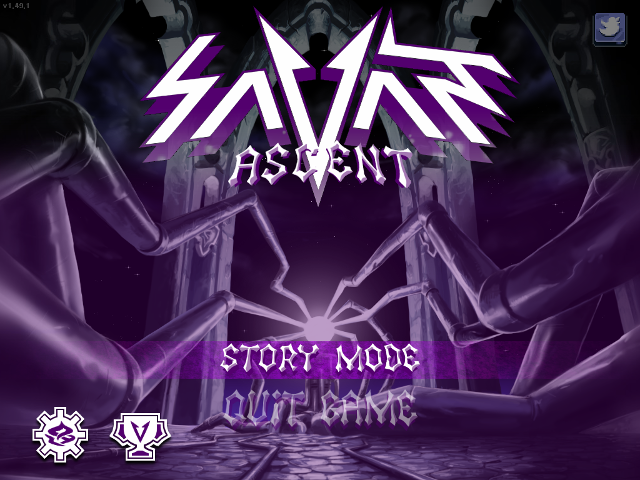 So what is this weird electro-dubstep currently blasting out my headset?

Savant’s title screen has two written options: New Game, and Quit Game. The rest, like the actual options, are hidden in icons in the corner of the screen. Gear and trophy for options and achievements in the lower left, and a curiously cute pixelated Twitter bird in the upper right.

Options… graphics, controls, audio, resolution. Outside the graphics menu, yes. And why are there ‘no languages available’? How will I communicate without languages? 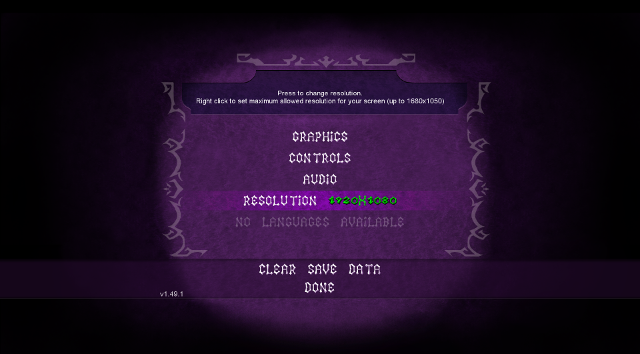 I need those to words!

Nothing much else to pay particular attention to here, to be honest. The graphics menu has a few options for particles, shaders, and warning types, as well as the Fullscreen option that somehow isn’t bundled with the resolution. The audio menu has all of two sliders. And the controls menu only allows switching between ‘gamepad’ and ‘mouse and keyboard’, with the latter also opting for available keyboard layouts. Azerty fans rejoice, I guess.

I hit New Game. A cape swishes into view, briefly. Then, a glowing orb. The one I was looking at earlier? But much, much closer.

A masked man with a purple eye approaches the orb. He makes a grab for it… a crack. Two cracks. An explosion. The man is thrown from his tower, to the ground below.

Shaken, the man looks up. Pulsing lights and noise are coming from up. The orb is fizzing, arcing, swinging any and all metal around, and rebuilding the tower. His tower. And while the man’s back betrays little emotion, I can’t help but read the expression that I’m sure is underneath his ever-present mask: 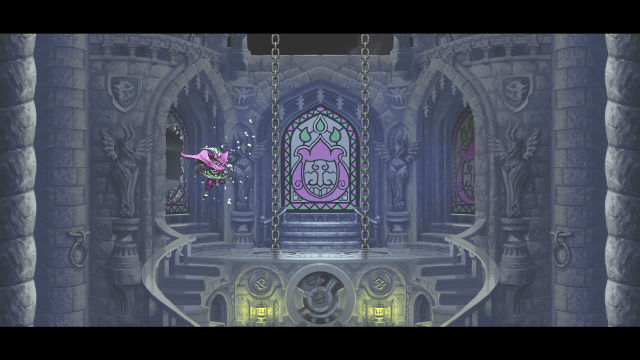 Face-first through a window!

As soon as I learn this first set of controls! 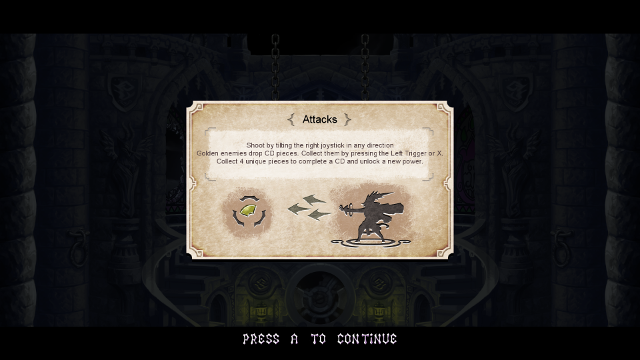 And the second set straight after.

Alright, what’ve we got? Standing more-or-less in the center of the screen is what I can best describe as a Hot Topic reimagining of the Phantom of the Opera. Plague doctor mask, fancy tricorn hat, slightly unfortunate purple-green colour scheme, belts galore. His environment is equally baffling: is this a medieval castle with one fully functional gear? And a bunch of chains?

Before I have too much time to take all this in, however, the action starts: as more electro-dubstep starts up, a single tiny flying robot appears out of thin air! It starts moving in a counterclockwise direction to the pulsing beat of the music. Frightened and confused, I slam the left analogue stick to the right, and my Savant spin-dashes in that very direction. 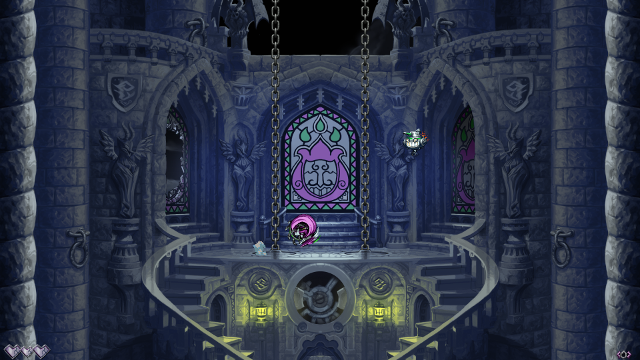 Making both my character *and* the tiny robot look as if they’re straight from a Sonic The Hedgehog game.

I waggle the control stick a little more. Savant here doesn’t so much move as that he dashes from place to place. Two places, to be exact: Savant only ever stands in front of either giant chain. He can dash from place to place in a straight line, perform an arced jumping dash that gets him the same place, or just dash-jump in place, straight up. Another tiny robot appears as I figure this out, moving in lockstep with the first; both tiny robots are unimpressed with my antics. 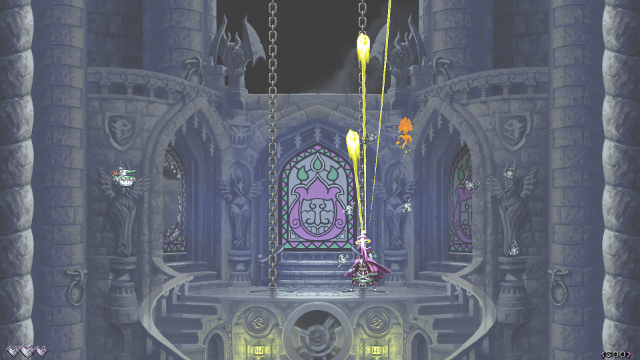 I tilt the right analogue stick in the direction of the first robot, and Savant fires a constant barrage of yellow projectiles that general way. Are these… CDs? They kinda look like energized CDs. The beat-beat-beat moving robot has little in the way of rapid avoidance movement, and my Dragon Ball Z-esque stream of destruction quickly shreds it into shrapnel.

Flush with power, I shoot the second robot too. Hah! Take that, second robot! A third robot appears, and I destroy it too. Wow, this is easy! Then, five robots appear, in a diamond formation, the one in the middle slightly different from the rest. I soon learn why: after annihilating all five of them — c’mon, all they do is fly in a circle, it was a foregone conclusion — the center robot leaves behind one quarter of a golden CD. I hit the left trigger, as instructed earlier by the tutorial, and Savant shoots out a chain from his body to collect it. 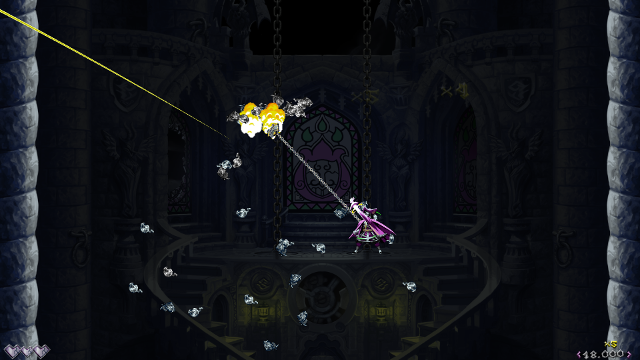 He does that, I guess. 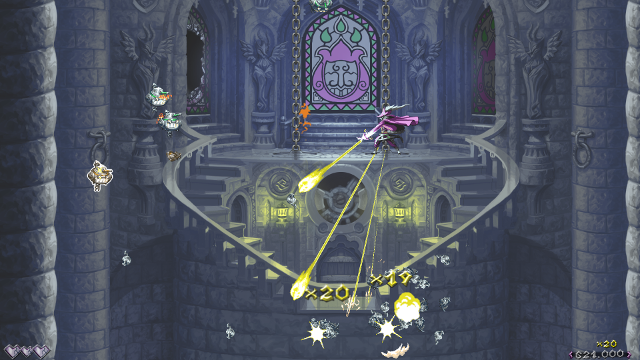 HA HAHA! I AM KING OF ALL I SURVEY

New robots start appearing faster and faster, though. And while they all start out content to move in circles, I soon learn what happens when their patience runs out: they produce a little audio cue, roll themselves up in a sphere, and launch themselves at my current direction. Suddenly, dodging becomes less about having fun and more about my continued survival — particularly because the tiny robots start spawning and attacking in larger and larger groups.

I get hit. Oof! One of the three metal hearts in the lower left screen corner disappears. I get hit again! Another heart bites the dust. And despite my best shooting-and-dodging efforts… 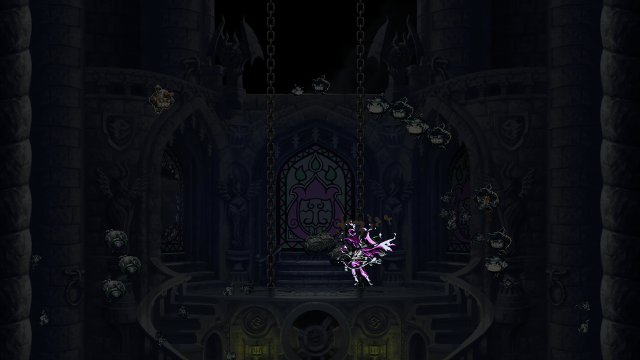 …I get hit a third time. 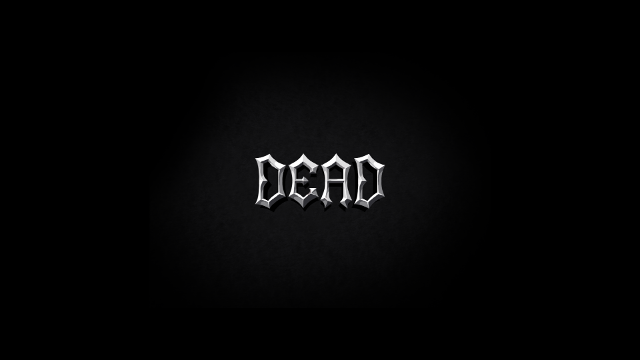 Again with the metal announcements.

Death in Savant means two things. One, my high score is tallied. New personal high score of 1.516.500, yeah! And second, my golden CD quarters are assembled into complete golden CDs. My final score of seven means I get one complete CD…

…which apparently translates to both a new soundtrack and a new power. 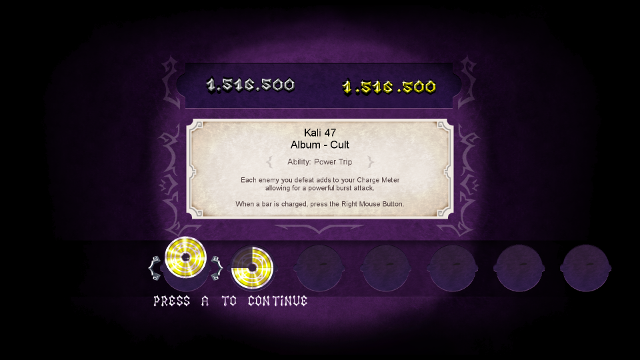 Nice. Does all music work this way?

‘Would you like to Try Again, or Quit To Menu?’ I think I would like to retry the stage, thank you very much!

Second verse, different from the first: a new charge meter has now been added to my HUD. It charges up slowly as I kill enemies. When fully charged, I can use right trigger to unleash a penetrating energy blast. My charged shots also slowly change colour, from yellow to blue to purple, putting in increasingly stark relief that my energy projectiles don’t look like CDs at all. They look like excited little faces. 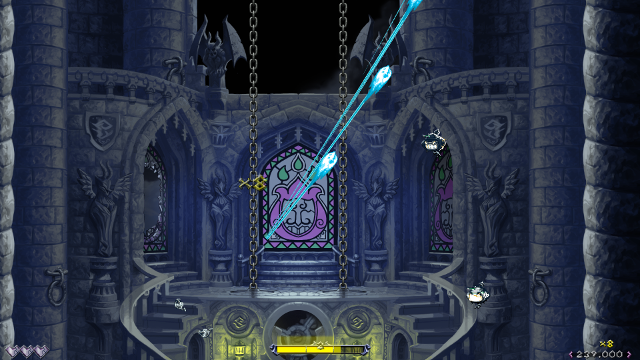 Tell me these little guys aren’t *totally* into it.

With the help of my charged shot ability, I swiftly and decisively kill every robot that deigns to show up on-screen. Then, a brief moment of silence, as Savant stoically stands near his anchoring chain… 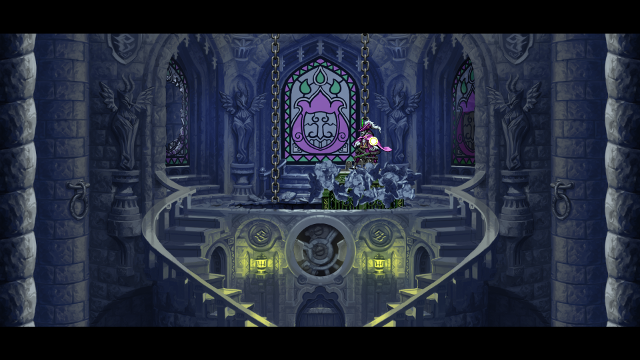 …only for those chains to dramatically reveal a fully functional elevator system.

With only one heart left, I quickly die to new enemies I don’t understand. Once again, my golden CD quarts form a new soundtrack/ability combo. I can actually select the soundtrack before heading into the level, and this briefly has me worried: does this mean every ability is inextricably linked to each soundtrack? Can I only bring one ability into battle? Will I have to listen to these generi-oontz forevermore, just because their associated charge is so rad? 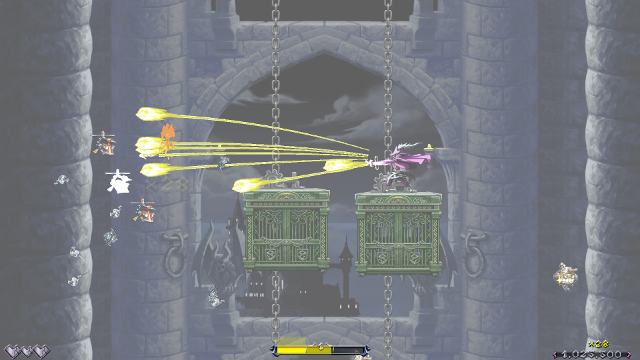 Then it quickly becomes clear that this is not the case at all, and my anxiety up and vanishes.

I think I’m going to explode some more robots. See you guys on the top of this elevator!