You know what else kind of goodness this spring of 2015-period is bringing? Completed video game Kickstarters! Depending on your personal predilection in backing, your past and coming several weeks may see the arrival of something in the vicinity of half a dozen Kickstarters finally touching down. The big names, of course, are the recently-completed Pillars of Eternity, the impending release of the second act of Broken Age — only slightly later than initially predicted — and the possibly-soon wrapping-up of Massive Chalice, which is currently on patch ‘0.96’. But several Kickstarters on a smaller scale have been hitting completion as well, and those are obviously of a little more direct importance for Indie Wonderland; depending on exact release times, you’ll see two or three of them pass our front page soon.

To wit: developer Dreadbit‘s Ironcast, a game that promised to combine colourful gem matching puzzles with Victorian-era mech-on-mech combat. Yeah, not hard to see which part of that pitch made me back it, no? Ironcast has been Early-Access playable for a few months already, but it finally left that wretched hive of scum and villainy to join the cool kids at the Released Games table not two weeks ago. And as such… here we are!

Ironcast does not waste any time getting to the good stuff. It knows why you’re here, instead of with any other game: you want to see steampunk robo-walkers shoot the shit out of each other in the streets of 1800s London. 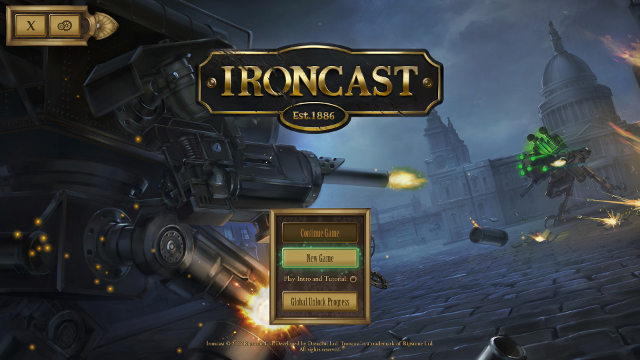 There’s not much hiding behind the little golden gears in the way of interesting options: music slider, audio slider, resolution, windowed mode, language. The bare basics, let’s call it that, but still functional enough. And there’s really not much in the title menu in the way of doing anything: besides the options, the credits, and quitting, I don’t see anything more immediately pressing than the bright New Game button. I mean, there’s a ‘Global Unlock Progress’, the function of which sounds self-evident, but it’s not like there’ll be anything to see there. I installed this game five minutes ago.

Except I totally forgot that I have played this game in Early Access. And while I may not entirely remember how global unlocks work in this game, Ironcast sure remembers. 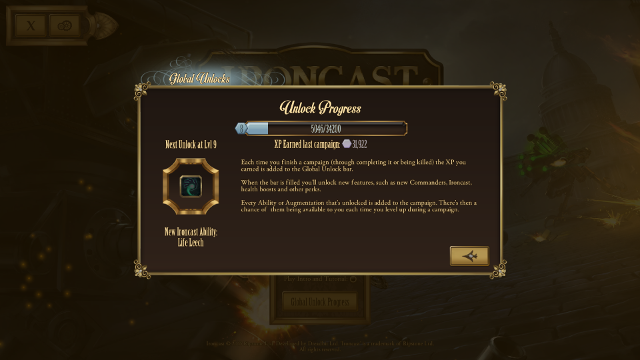 How are giant death robots like Pepperidge Farm and Faygo?

This also puts me in a bit of a bind, as it turns out New Game hides a plethora of game-changing options. Which of three unlocked Ironcast commanders do I want? Each with their own special abilities and ‘augmentations’? And which of four unlocked robot walkers do I want to put ’em in? Aah, I never asked for this! 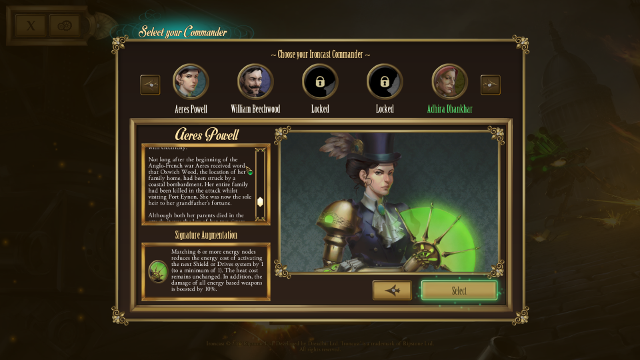 Luckily, I have a handy solution for this conundrum. And that solution is spelled ‘Play Intro And Tutorial’, the activating of which temporarily puts Ironcast back in This Dude Knows Nothing mode. It picks my Commander, it selects my Ironcast, and it gives me some crucial newspaper-based backstory on the war I’m about to be fighting in. 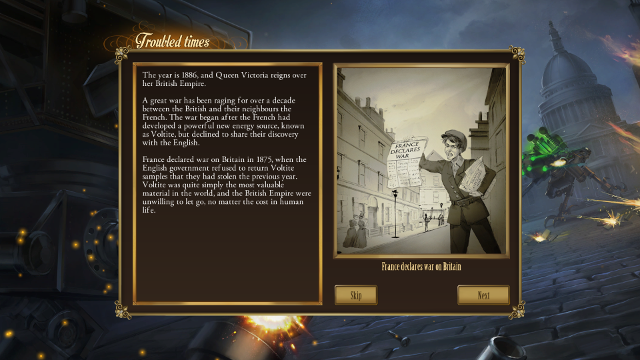 Short summary of the story so far: The 1800s French figure out a cool new energy source, called ‘Voltite’. The British want it, but the French don’t want to share it, so the British just steal some. A terrible stalemate war of trenches, tanks and heavy artillery was broken by the invention of the Ironcast, mechanized walkers that use Voltite power to be fast, powerful and cool.

Now, just recently, the French forces have launched an all-out assault on London. Zeppelin bombardments, Voltite artillery, battleships, steam-tanks, Ironcast vanguards, the works. Most of the British Army’s command structure has been vaporized, so it is up to the ‘Consortium of Merit’ — an exclusive club of Ironcast commanders — to repel this massive invasion.

We join the battle already in progress, as our hero — Ironcast commander Aeres Powell — finds herself recovering from an unexpected bomb attack… 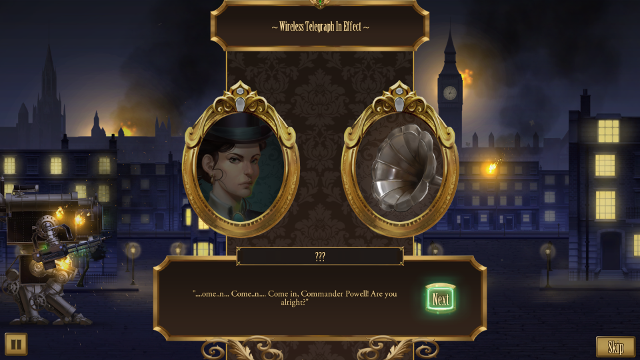 …which it seems she’s lucky to have survived in the first place.

Through the magic of the ‘wireless telegraph’ — yeah, I know, just roll with it — Aeres is contacted by her commanding officer, Lord Butler. It turns out Aeres’ noggin has taken quite the shock from that explosion, and while she is at least much more alive than four fifths of her erstwhile comrades, she’s come down with a small bout of (sigh) mechanics-related amnesia. 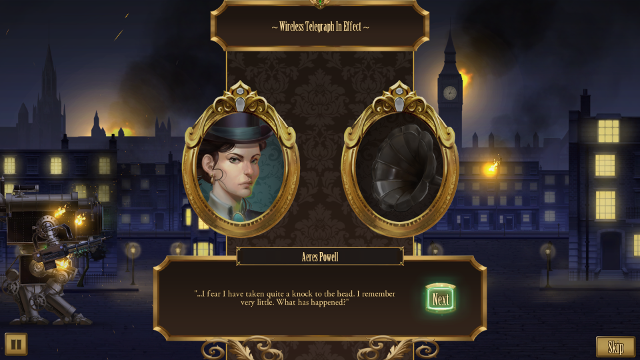 But hey, lemons and lemonade: Aeres not remembering how her Ironcast works provides the perfect foil for Lord Butler to explain basic operations! Man, it fits so well, you’d almost think it was intentional. 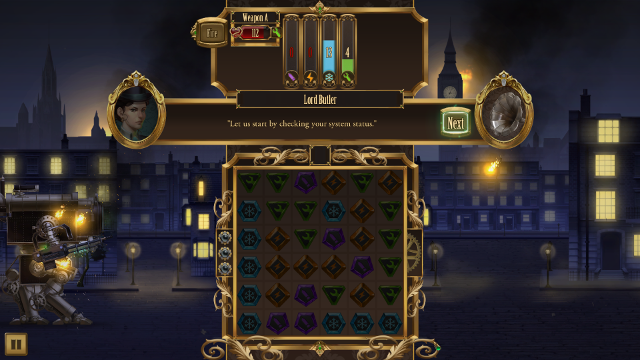 Less levers and dials and more shiny gems than I was thinking.

If you’ve ever seen Ironcast advertised or described as a ‘match-3 puzzler’, one look at the preceding screenshot should make it clear that you’ve been misinformed a little. Rather, Ironcast’s core puzzle mechanic is about connecting similar gems. Starting from any one gem, I can draw a line through other identical gems. Horizontal, vertical, diagonal, everything goes. Any line that hits at least three gems is a valid match, and releasing the mouse button then clears the gems — ‘nodes’, in Ironcast parlance — from the board and adds them to my stockpiles. 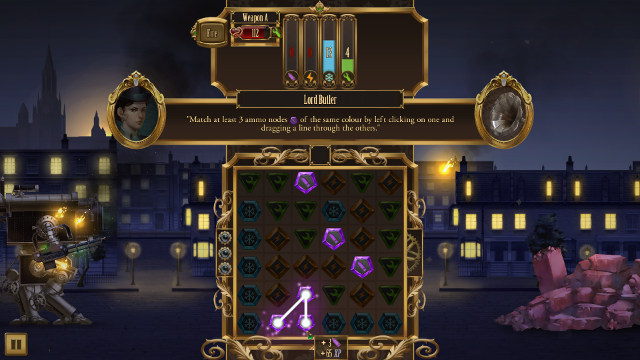 And also grants me ‘experience’, apparently.

The purple pentagram nodes with bullets on them are, surprisingly enough, Ammo nodes. Ammo is used to fire my weapons, in another ‘man points out blue sky’ shocker. My current beat-up Ironcast only has one functioning ‘Light Cannon’ projectile weapon, but that’s still more than enough to shoot up this pile of debris blocking my path. 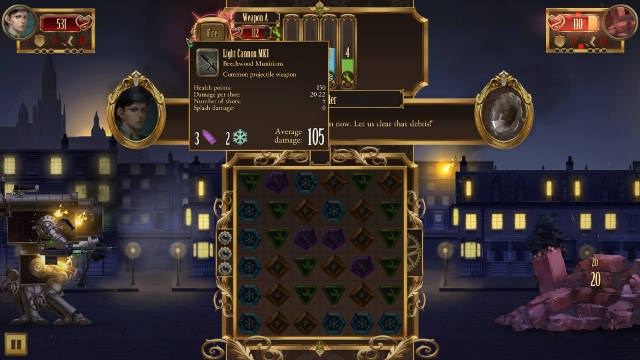 After clearing a path, it’s time for me to get moving. Except that while my weapon systems have survived the attack alright enough, the same can’t be said for my defensive Shield and Drive. But no worries! Green triangle nodes provide me with the magical power of Repair, and I’m back to full operational strength before you know it. 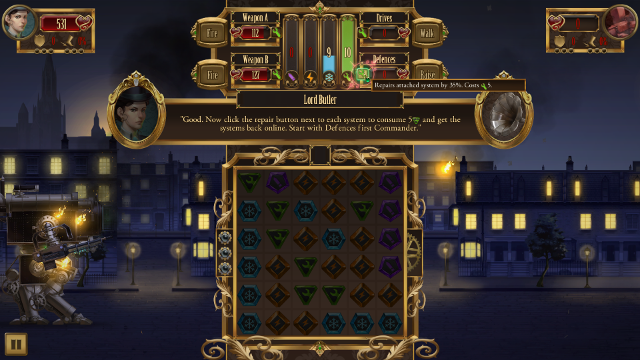 It’s so easy, one wonders why I even got damaged in the *first* place.

Shield and Drive systems are powered by orange Energy diamonds. Shields raise a protective bubble that reduces damage from incoming shots, while Drives set my Ironcast to moving and incur a chance to miss for each enemy attack. Both systems have three levels of effectiveness, and they degrade ‘every turn’. 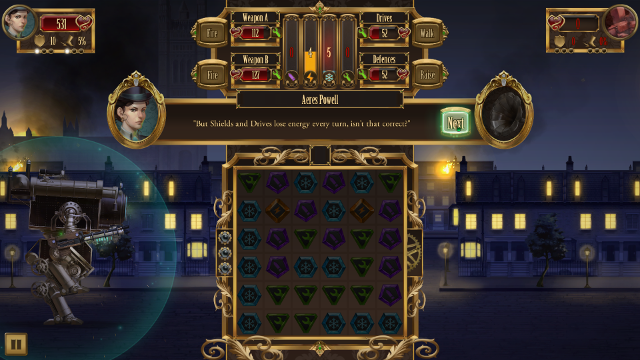 Look at the top left corner. Look at how *powerful* I am.

Activating weapons and defenses consumes blue hexagon Coolant, necessitating that I pick some of that stuff up as well. Coolant isn’t ‘necessary’ to activate systems, but unless you enjoy burning alive in a giant brass death trap — and taking hull and systems damage, I guess — it’s very much recommended that I keep an eye out.

‘Everything is slowly coming back to me’, Aeres mutters. Well, that’s excellent timing, ma’am, because a giant hunk of walking armor and guns has just sauntered into view. A French Ironcast! Tally ho, onion breath!

When fighting anything more threatening than a pile of bricks, combat is carried out in turns. Every turn, I can make up to three node matches, and activate as many systems and abilities as I want (and have the resources for). Which, yes, implies that I could theoretically stack up crazy amounts of Ammo and Coolant and destroy the enemy in a single turn… were it not for the fact that all resources have limited storage space in my Ironcast. Too bad, so sad, and so on. 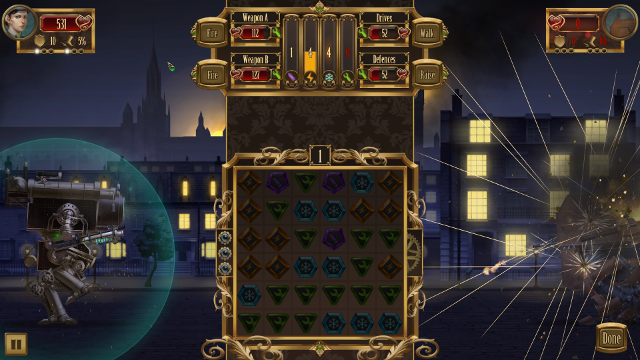 I mean, this time, I don’t *need* endless supplies to beat the enemy in a single turn.

The tutorial rolls on a little further after that, with the optional ‘advanced tutorial’ — which I obviously take as well — explaining the intricacies of different weapon types, subsystem targeting, Overdrive and Link nodes, and the yellow square ‘Scrap’ node, which provides meta-game benefits at the cost of not actually helping the current battle. The whole thing is framed in the context of battling another French Ironcast, and only when I reduce that thing to glowing rubble are my lessons considered to be a complete success.

Damaged from the fights, I retreat back to the nearest Ironcast hangar base, a church called ‘The Spire’. Here, a brief meta-game tutorial swings into full effect. The long and the short of it is this: Ironcast’s campaign is set up as a number of interconnected semi-random missions, all leading up to one big boss fight with a powerful French commander. Doing missions earns me Experience, and whenever I level up, I can select new active or passive Ironcast upgrades from a randomized set. Missions also net me the aforementioned Scrap: Scrap is used to repair my Ironcast between battles, to buy stat upgrades, and to create new gear from blueprints.

Crikey, what an information overload. Can’t I just go shoot some enemy robots for now? 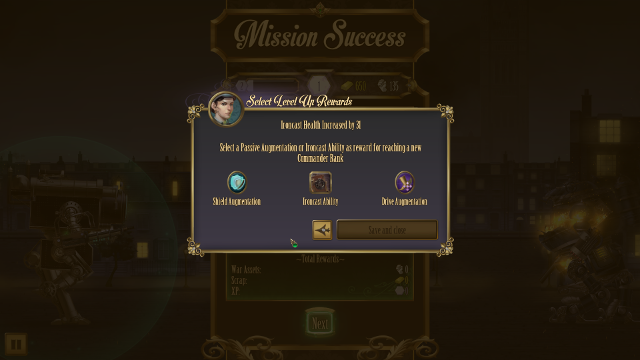 NOPE. The complicated systems follow you around if you try to flee!

After every mission, I’m given a choice of three new missions. The first set of missions I got after the tutorial were all samey ‘destroy an enemy for similar rewards’ medium-difficulty missions. But the second mission set has this intriguing red icon, with associated intriguing mission backstory: 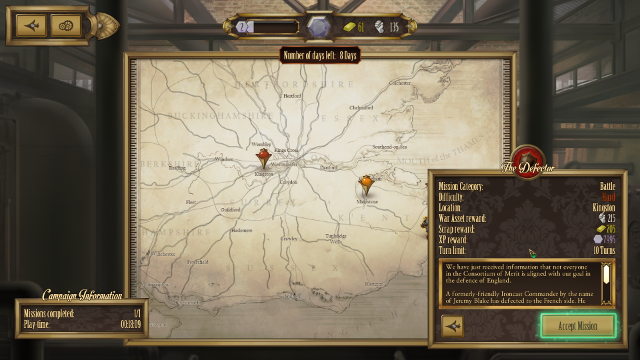 A *traitor* in our midst? HE WILL BE DESTROYED

‘Hard’ mission, huh? I halfway remember doing this exact mission in the Early Access version a few times. There was something about it, but I can’t quite put my finger on it… 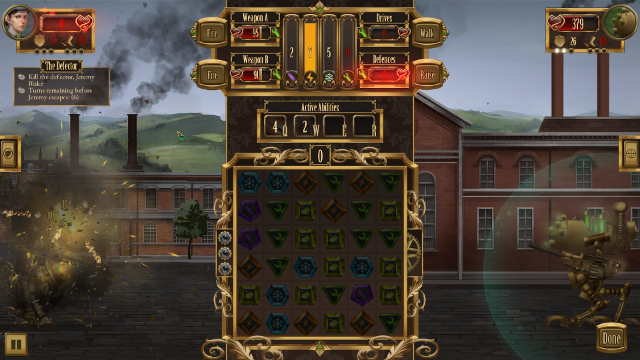 My Ironcast goes down in a shower of sparks and shrapnel. And that, as it turns out, is the end of the line for commander Aeres Powell: losing one mission by way of catastrophic hull failure ends the entire campaign, granting me some of that aforementioned Global Unlock experience before unceremoniously booting me back to the main menu. Mission failed, commander: the French were victorious this time around. Perhaps you’d care to try again? 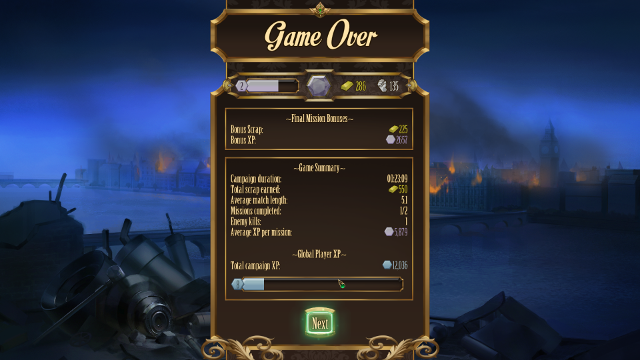 You know what, Ironcast? I think I will try again. It takes more than a single case of explosive death to stop an officer of the British Empire! And those French bastards need to be taught a lesson, anyhow: they think they’re so cool, with their zeppelins and their artillery and their ‘Gargantuan’-class invasion commander. Let’s see how gargantuan that thing still is once I slag it well and good. Tally ho, and all that! For the Queen!