Alright. I know — or at least assume — that you guys don’t come here to repeatedly hear me complain about work worries, so let’s just say our drought of the last two weeks should be over now. Time to get back on schedule.

The most I can really tell you in advance about Crescent Moon Games‘ The Deer God is that I’ve ‘known’ about it for a while. I read about its development… somewhere or other, on the internet, once. Beyond that, I know more or less nothing about it. Besides the obvious conceit that you play as a deer. God? Dear god, the pun potential of this game is reaching weaponized levels already, and we haven’t even started yet.

I knew nothing about The Deer God and I wasn’t actively tracking it, but they do say life — and the odd random review code email — happens while you’re desperately scrambling up other plans. And as I assume that other old chestnut about gift horses also translates to deer more or less directly… here we are, I guess.

The Deer God’s title screen is pretty, cube-like and moon-lit, and its wears its cervidean heritage proudly. 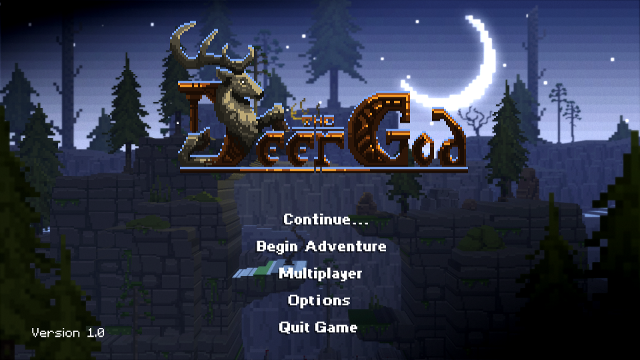 It’s also rather sparse, as far as options go. But I suppose that actually makes some in-character sense. We’re talking about a deer god, after all. What use would it have for computer game options? Can it even control a computer, what with having hooves instead of articulate fingers? Or are we assuming that its intrinsic divinity is enough to overcome these minor operational problems? Because in that case, it can also be assumed that the entity could change any game setting it chooses through sheer divine will alone. Either way, it probably doesn’t get much out of hand-holding.

For us non-divine creatures, deer or otherwise — any actual gods reading this right now can safely skip to the next paragraph — the provided options shortlist looks like this: 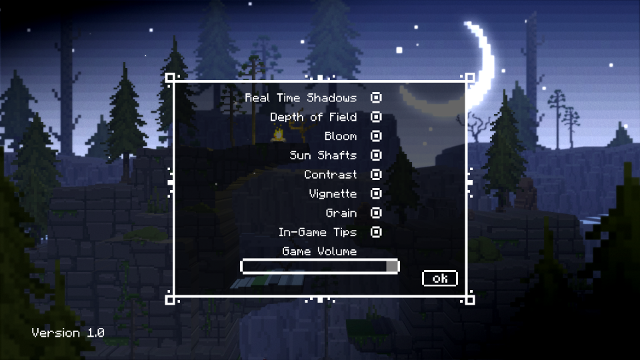 And apart from the hilariously old-timey-feeling multiplayer menu, which actually requires port forwarding and manual IP connecting, there’s not a whole lot to The Deer God that isn’t ‘starting a new game’. So, without further ado, let’s jump into Save Slot 1 of 3 — Hardcore Mode instead of Normal Mode, of course, because this isn’t the Chicken God — and see what we get.

What we get, apparently, is two dudes camping in the woods. 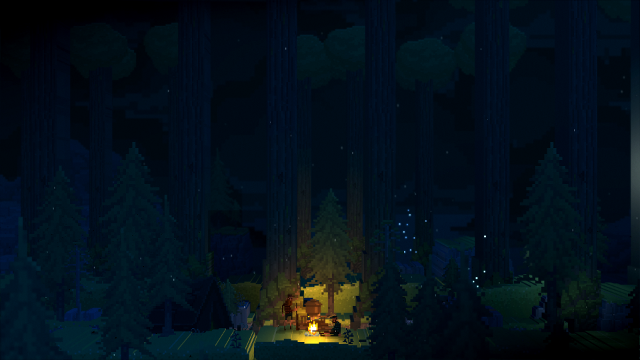 Just having a good dudely time of it, as dudes do.

“Don’t think we’re gonna find any tonight,” mumbles one dude, “not in this weather.” I assume it’s either one of them talking, but their low-poly pixel frames don’t really show a lot of body language. “Yeah, I’ve had enough”, the other replies, “Going to bed. You?” 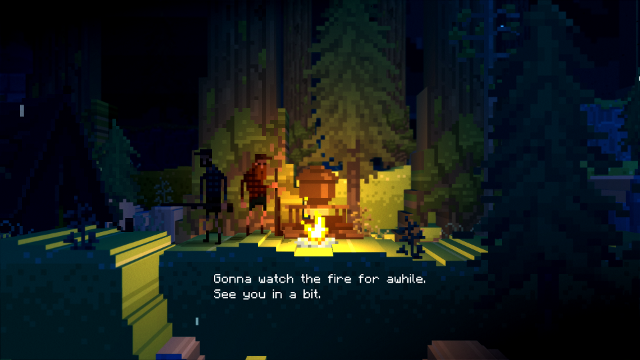 Okay, that does help differentiate them.

Redshirt takes aim, slowly, carefully… losing track of everything but the stag in his sights. Which isn’t altogether a *great* idea out in the woods, as the carefully encroaching pack of wolves demonstrates. Redshirt fires at the stag, a baby fawn steps in the path of the bullet, the wolf pack attacks, and… 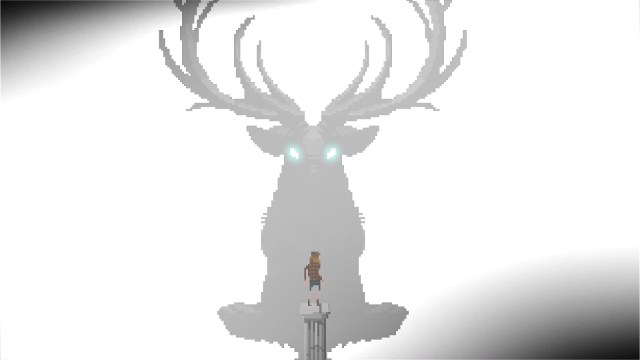 And then shit gets *weird*.

Yeah. This cutscene doesn’t have handy-dandy subtitles, but as far as I can tell, this is what’s going on: Redshirt has angered the titular Deer God, by way of wantonly shooting a baby deer. Redshirt is also dead, by way of wanton wolves. As punishment for his earthly crimes, or something, the deer god is sending him back to Earth as — see if you can guess! — a deer. The reason for this is unclear, but I assume she thinks it’ll be hilarious karma or something. Redshirt is given a last tidbit about ‘regaining his humanity’ through some ancient prophecy or some such, and then he disintegrates into pixels. The screen fades to white, and…

…I, formerly Redshirt, am now a deer. 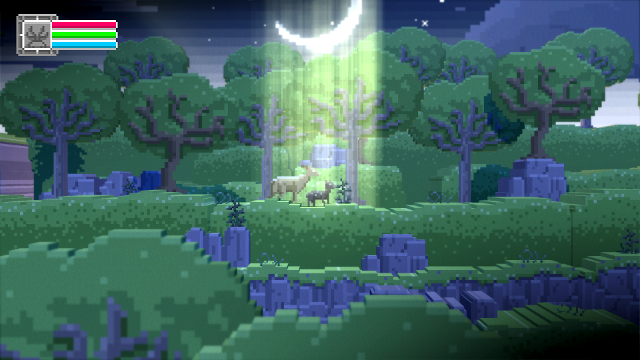 A fawn, to be exact.

Okay, this isn’t so bad. I’ve been in worse situations. I’ve lost count of the number of games where I controlled something that didn’t even have bones, so a fully-formed baby deer — it’s already standing and everything! — is basically a walk in the park. Or a walk in the forest, as the case may be.

With a touch of the WASD/arrow keys, I Deer It Up. Left and right move. Down does nothing. Up catapults my baby deer into the air, a vertical leap that would make Michael Jordan envious. 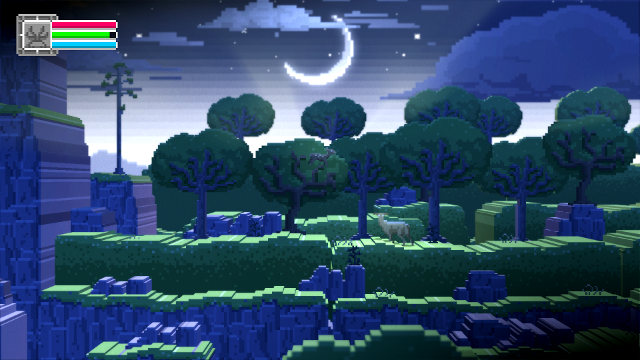 In the top left of the screen, I discern three bars. Red, green, blue. I’m going to assume that red means health, because that’s just how video games tend to roll. And blue can be… energy, maybe? I have no idea what the green bar represents, but as I watch and run around, it ticks down a notch. Clock’s ticking? Who knows.

Exploring to the left yields only a giant sheer rock face. And since I’m a deer, not a mountain goat… running to the right provides more actually passable terrain. I pass grassy plains, trees, some rocks… weird deer-emblem-inscribed ruins… an ancient-looking Deer Elder with a bell around its neck… 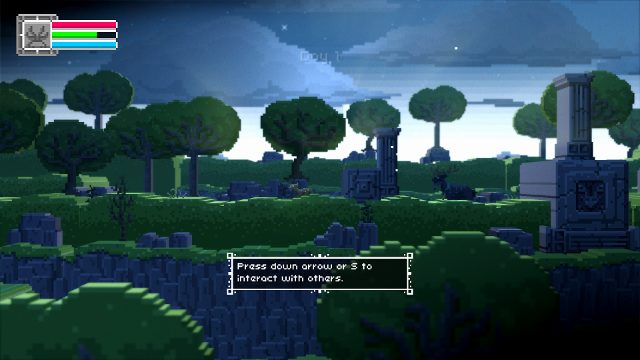 I don’t remember even seeing these things in forests.

I sidle up to the old deer and dutifully press S. “Hello there!” it chimes, somehow, in what I’m choosing to call DeerSpeak. “At long last… you must be the trans human!” Er… I don’t know, buddy, I didn’t know Redshirt here that well. But if you say so! 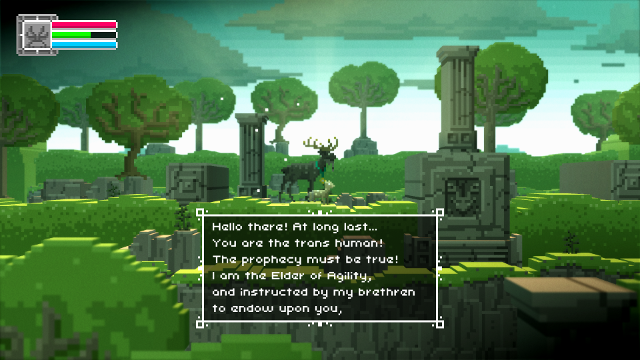 No, that’s actually what he says.

Long story short: the Deer Elder of Agility a) informs me about the Ten Mystical Statues of the Deer God, all of which bestow powers on the worthy deer that solves its riddles, b) suggests I seek out the other Elders, who are hanging out here and there and everywhere, and c) grants me the notoriously cervidean power of Double Jump. Yeah, and you thought I had hang-time before. 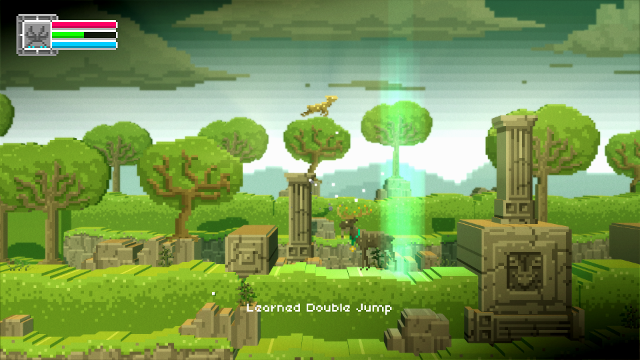 GRAVITY HAS NO HOLD OVER ME

Redshirt-deer takes all of these developments in remarkable stoic stride, which is to say that he doesn’t actually say anything. Which, you know, I would have expected from a deer, but we just found out other deer can totally talk. But hey, not my place to tell them how to deal with shock.

I clear the tall pillar easily and continue on right. I can only go right, so far. I pass more grass, water, trees…

As I go, the green bar steadily keeps ticking down. What is this?… What it is, apparently, is a Food bar of sorts: the gradually emptying bar indicates that my little fawn is getting all sorts of hungry. Luckily, the map is replete with edible bushes, and ripe tree-bound apples well within double-jumping range. Because that’s what deer are totally known for: snatching apples from the sky.

It also turns out I was right on both counts for the other bars. I run across a porcupine at some point, see, and… it turns out porcupines and deer do not get along. The prickly bastard runs up to me, seemingly out for my blood. For… some reason? Luckily, The Deer God takes pity on me here, and instructs me that pressing Spacebar during horizontal movement allows me to do a sweet damaging dash attack. Because that is actually something (male) deer are totally known for: antler-butting things until they die. 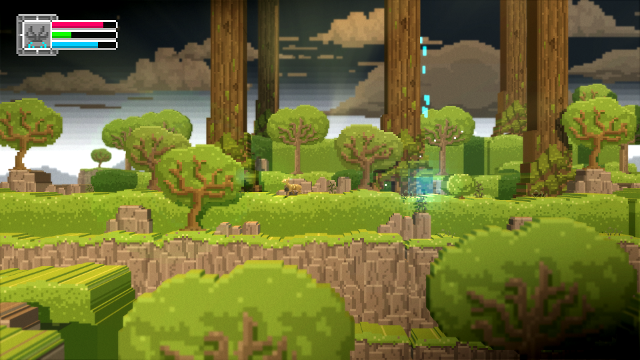 Haha! Take that, nature! I move up to a nearby deer — a large, fully-grown stag — and proceed to headbutt that guy into vapour, too. It doesn’t even fight back, oddly. Also, instead of a health bar, this guy has a health heart. And when I kill it, it turns into red mist, not blue. Hmm…

I proceed. Close to the Stag That Was, I run into a strange human hermit. He talks to me, for some reason; asks me to meet him in his cliff house, to help find the monocle that he lost. A monocle he clearly needs, if he can’t even tell deer from people. But sure, I’ll try to find your monocle. As soon as I find your house. As soon as find out how to actually get to places. 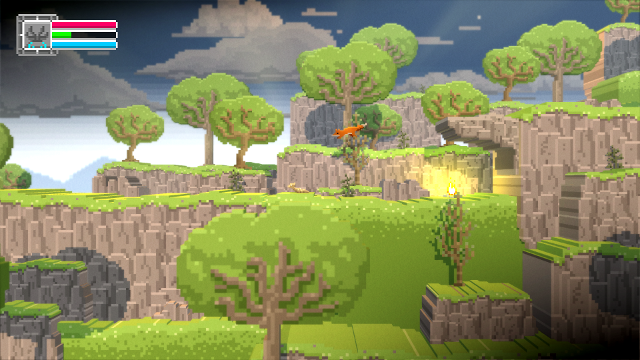 I proceed. As the sun sets, I run through a section of the forest that has caught fire. Happens, I suppose. Happens a lot, because soon afterwards, I find even more burning trees. Where’s Jones when you need her? I move through more endless fields of grass, killing anything I come across, as Day 1 shifts into Day 2.

All the while, a strange icon in the top-left HUD has slowly been filling. I don’t know which of my actions influence that? Eating, fighting, running? Whatever the case, it fills completely on the dawn of the second day… and I grow, from baby fawn into young-adult deer. 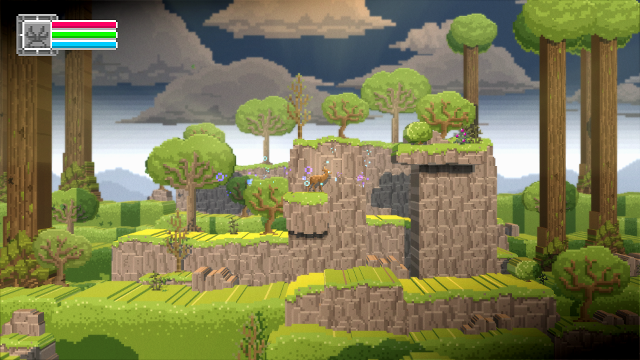 Yes! I can run faster, jump higher, and possibly headbutt harder! I’m even starting to get antlers! Elated, I run further to the right, through the forest, past the sudden change into barren rocky scenery, and straight into a bed of kill-spikes. 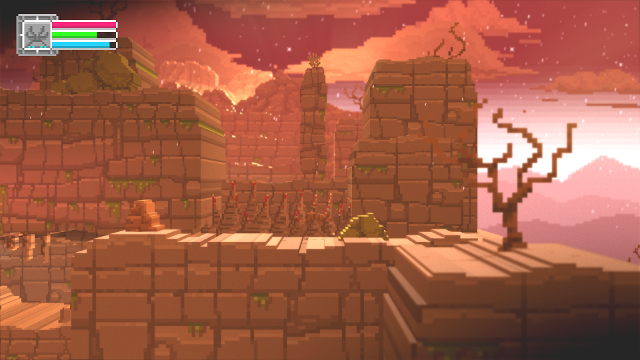 You find these a lot in the forest.

I find myself before the Deer God again. “Human”, she intones. “For your mischievous deeds, you will be punished.” I evaporate into particles again, and… 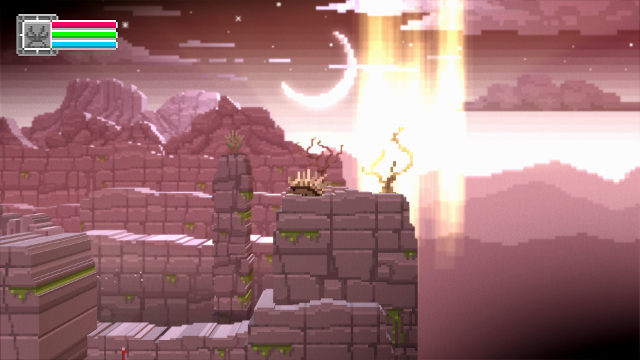 I am now a porcupine. I… I guess? I didn’t know the Deer God’s powers extended to other forest life forms? But sure, whatever, I’ll roll with it.

I move up and down a little, trying to figure out the porcupine’s powers. Can you jump? No. Can you dash? No. Can you do anything cool involving your own spikes, like maybe shoot them or stab with them or roll into a ball? No. Can you do something cool with external spikes, then, like move through them safely? 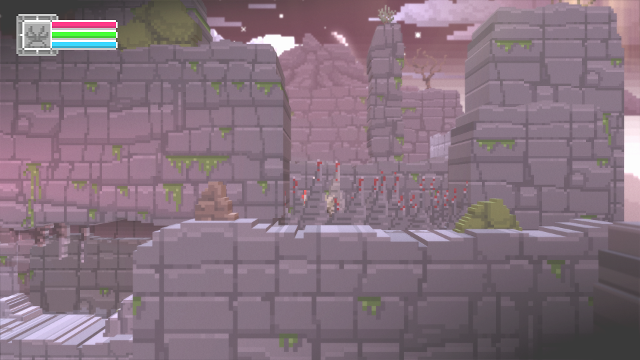 After I die the second time, the game straight-up fades to the title screen. Am I dead for real, now? I guess I am: checking the save slots reveals no saved game waiting for me. Harsh, Deer God. It wasn’t enough to turn me into a useless porcupine.

Well, I guess these things happen. No deer lives forever! Let’s see if my second cervidean adventure plays out a little better.