Man. I was going to write about something else this week, something I’ve been planning for a long time. But whenever I opened up the page to write about it, I’d stare at the screen for a few seconds, and then boot up Space Game instead. Elite: Dangerous is a pretty stupid name, so my friends and I have taken to calling it Space Game instead — not just because it’s a game in space, but because it feels like the definitive, quintessential space game. I haven’t played a ton of space sims, but honestly, it feels like it really is that good.

Note that when I say space game, I don’t mean to imply an experience like Gradius or Mass Effect — action games that have you jump into the position of Space Hero immediately — but instead an experience where you’re just one person with a ship and an entire galaxy to fly around in. There are numerous ways to make money, including trading, exploring, mining, pirating and bounty hunting, and you’ll do whatever combination you like. 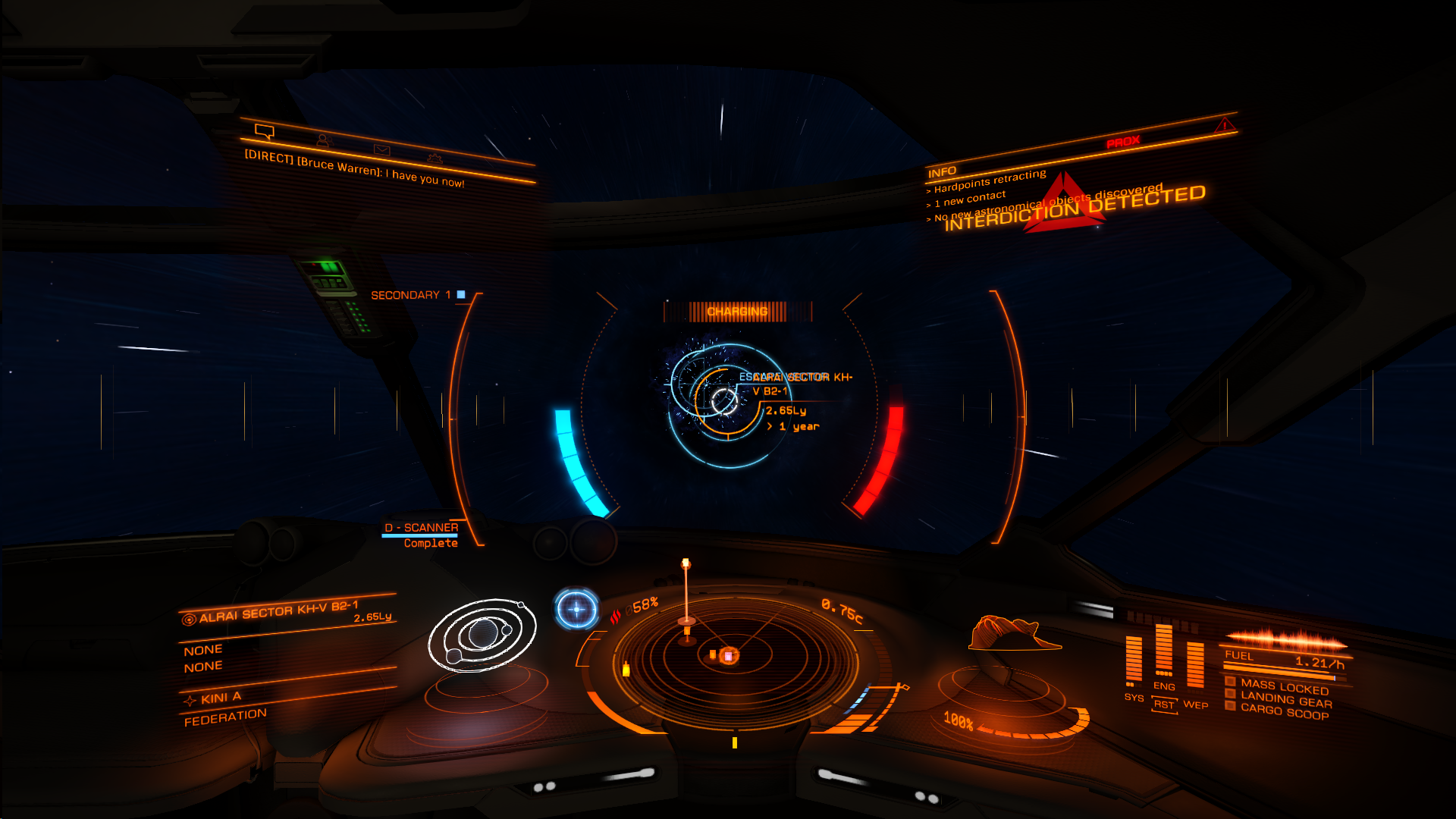 You start with a cheap ship and upgrade into whatever suits your style. I’ve been mostly trading and exploring with a little bounty hunting on the side, so I got a jack-of-all-trades ship and kitted it out with an extra-large cargo hold and a fuel scoop. (Fuel scoops let you generate energy by floating near a sun.) My friend and fellow commander is really into the combat, so he got himself a combat-focused ship and sought out the best weapons he could manage.

Whatever career you find yourself in, a very large portion of your playtime will be spent flying from place to place, and maybe looking around for bounties to collect or planets to scan. That might sound boring, but I think what makes it work really well is how amazingly they nailed the game feel. There are a thousand subtle touches that I love, like how you look at computer screens to your left and right to check things like your map, mission objectives and statistics. That feels far more immersing than opening up an obvious Game Menu popup. When you speed up or slow down your field of view pulls back or forward respectively, and the camera shakes a bit — not enough to be jarring, but enough to give you the same sort of virtual kinesthesia you feel when driving a car. The lighting is amazing, so the light from the nearest sun comes into your cockpit view at the appropriate angle and shifts based on your rotation and distance.

And amazingly, the world you’re in feels persistent and ever-changing. There are three major factions called the Federation, Empire and Alliance (basically the Corporate Empire, Caste-Based Empire, and United Nations Defending Themselves From The Two Evil Empires) but there are also a plethora of other factions based in each of the many, many systems. Whenever you complete a mission, even if it’s something small like a delivery, the game tells you the reputation change, influence shift, and statistical gains/drops of each faction involved. You really get the sense that while carving out a story for yourself, you’re also affecting a world much bigger than you in small ways that can lead to big ways. 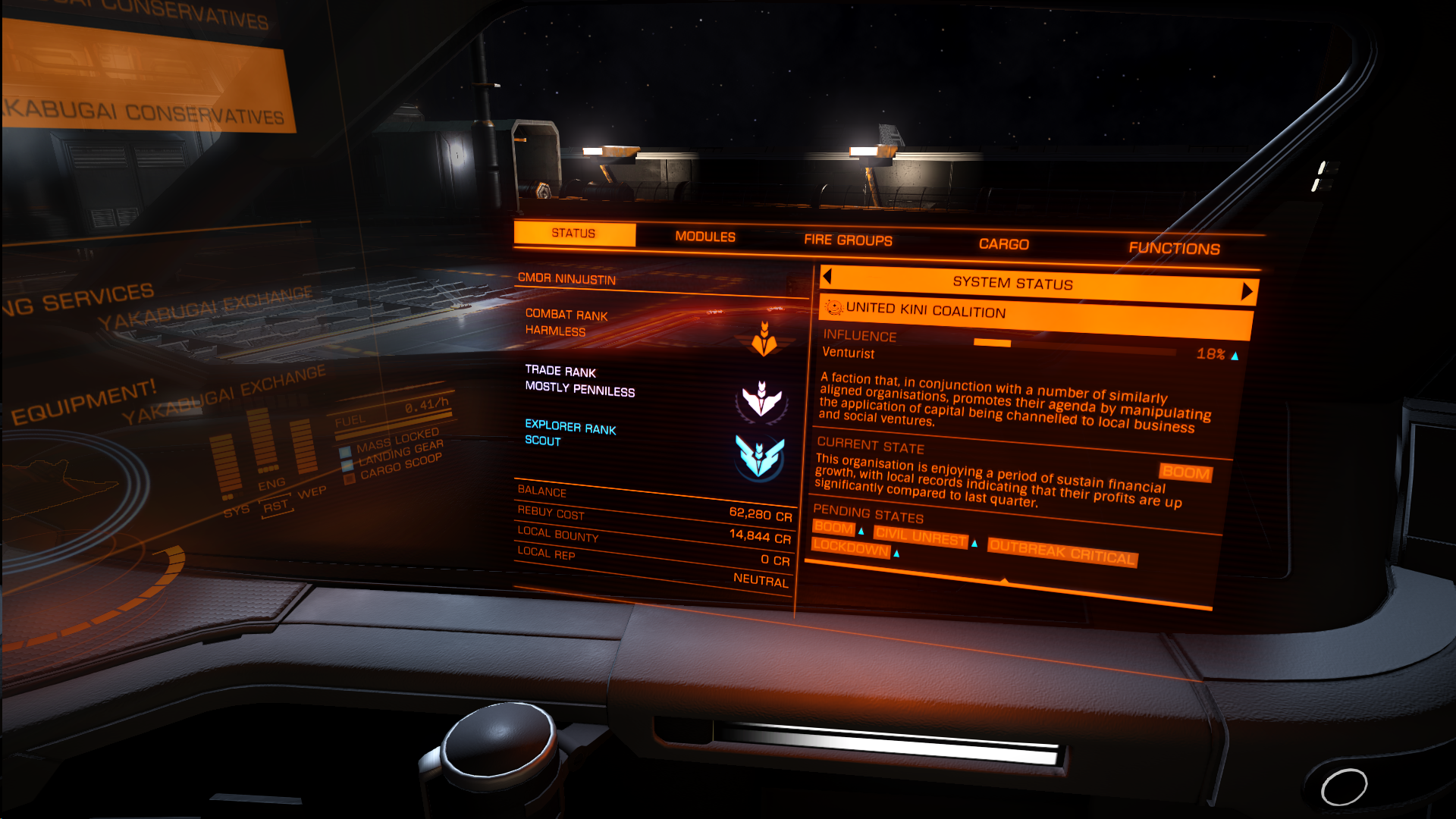 They say the game is in beta, but it already feels like a complete product. Hell, it practically feels like the kind of game Peter Molyneux would promise and then fail to deliver. It’s huge, absorbing, persistent and fun. There’s a ton they could add — I’d like to be able to explore places on foot, for one — but I’m telling you that while I almost never spend $60 on a game anymore, I don’t regret this particular choice.

You can buy it for yourself from its website.