Looks like we’re headed for another Kickstarter Bounty Time, eh readers? Between last week’s Hot Tin Roof, this week’s There Came An Echo and the ever-increasing bundle of Kickstarter emails I get that promise near-future release date, I might as well hard-code ‘game source: backed on Kickstarter’ into my standard Indie Wonderland template. I won’t, because doing so would almost guarantee that every single game Kickstarter I’ve backed will be hit with mysterious delays. That’s just the way the world works, innit? And I use my amazing future-altering powers for the good of mankind only, readers.

There Came An Echo is the brain- and code-child of one Iridium Studios, previously known for Sequence, a game whose Indie Wonderland review is lost to the annals of internet history. As with most Kickstarter games, I haven’t really paid much attention to the development process. All I really remember of There Came An Echo is the reason I backed it in the first place: Iridium Studios promised to deliver a fully voice-operated tactical gameplay experience. And aside from one early tech demo I half-remember playing, I… I actually have idea to what degree they managed to pull that off? If at all? But given that There Came An Echo is quietly sitting in my Steam inbox as we speak, I suppose I’m about to find that out.

The internet is replete with stories of video game Kickstarters going financially belly-up, underestimating costs and over-promising on physical rewards until at the end of their money, there’s still half a development process left. Even successful Kickstarter aren’t immune to the odd financial mishap, as the Double Fine Adventure kerfuffle has shown us. And neither, I guess, is There Came An Echo: while it managed to survive development into release just fine, it seems clear that some corners necessitated cutting near the end of it. Why else would the title menu use an incomplete font for its vital first impression? A full thirty percent of the letter lines is just missing. Tell me this doesn’t scream ‘bought at a shady discount font site the day before printing’. 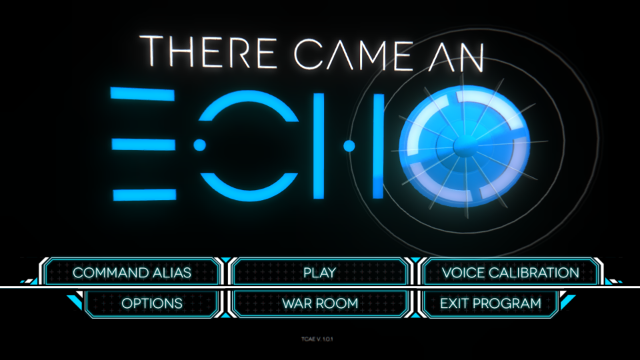 I jest, I jest. It looks lovely.

There Came An Echo presents me with six options; three are commonplace, three are not. Of these, the one least worth talking about is Exit Program, so le-

Shit, I just said Exit Program and the game closed down. Random immediate crash, or does the voice control extend all the way to the title menu? Here, let’s try another thing.

What I usually do in menus like this is talk about the Options first, so- 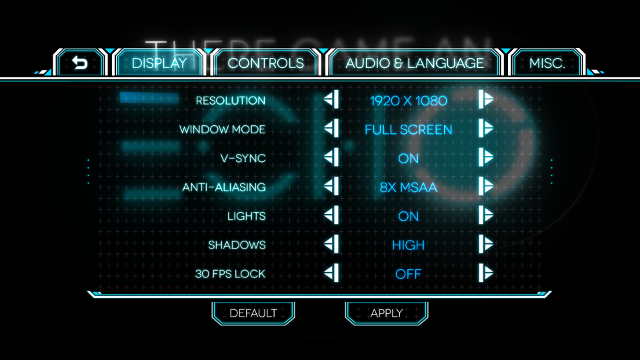 Hah, I guess that *does* work!

There Came An Echo’s options are mostly fairly standard as far as options go. Light suite of graphic options, as you can see in the previous screenshot. A tiny set of keyboard/PS4/XB1 ‘controls’, apparently intended for those people who want to play this unique voice-controlled game in some way that does not include voice control. Which, honestly, is actually a pretty rad thing for Iridium Studios to include, very accessible, so bonus points there. Audio includes your standard set of master/effects/music/voice volume sliders, a language setting, and ‘voice sensitivity’.

And then there’s the ‘Misc’ options menu. Which includes such esoteric options as the difficulty level, push-to-talk preferences, the ever-elusive subtitles, something called ‘Intel RealSense’, and… my blood type? I guess? 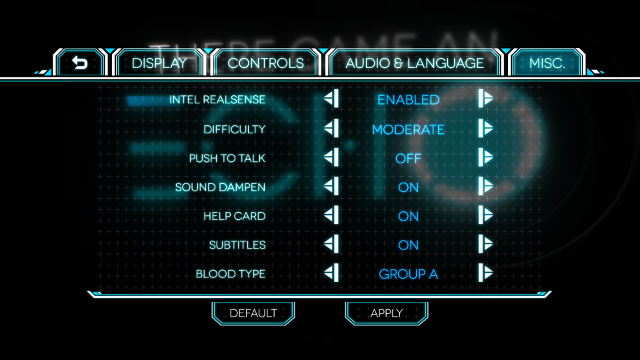 I actually have no idea why There Came An Echo wants me to input my blood type. But that’s okay: I don’t actually *know* my own blood type, anyway.

And then there are the non-standard title options. Of these, Voice Calibration seems the most straightforward: making it so that There Came An Echo recognizes my voice. Like so: 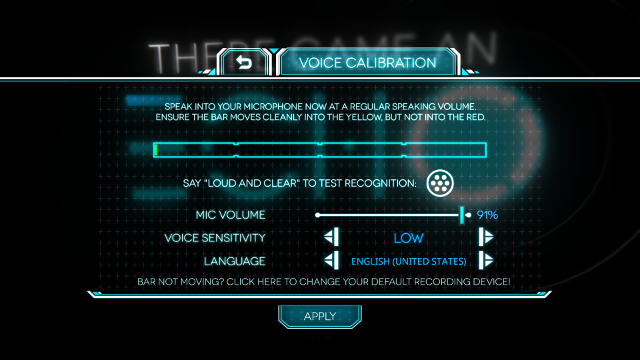 At first, I can’t quite manage to get There Came An Echo’s voice volume levels up to the requested mid-range level. I boost mic levels and audio boosts and change voice sensitivity, but to no avail. It isn’t until I switch from my desktop snowball mic to a (recommended) headset mic that I meet with some success. Tweaking the headset settings does easily get me in the proper range, though. And, interestingly, the recognition test aspect of it works on both mics: There Came An Echo recognizes my ‘loud and clear’ even on incredibly low volume ranges. Which, I mean, I guess I knew already, because I voice-controlled the menu earlier.

Command Alias presents me with a list of… words? Commands, I guess. Are these There Came An Echo’s voice commands? Each command has an Original phrase, some have an Alternative to go with it, and then there’s the Custom column. I can actually enter my own voice commands here? That’s pretty neat. And There Came An Echo should then be able to recognize me saying it, huh? 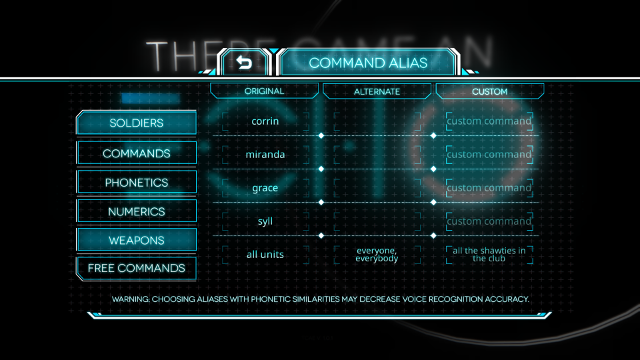 This calls for experimentation.

Finally, there’s the War Room. I click it — still not 100% used to this voice command thing — and… 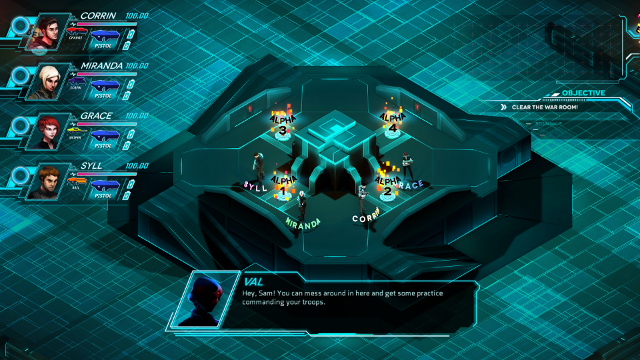 Oh shit, all sorts of action!

Okay. Okay, okay. This is a lot of new information. What is…

The War Room, as it turns out, is a combination skirmish space and audio try-out room. In here, I can command around four soldiers — Corrin, Miranda, Grace, and Syll — and get them to run places, raise and lower shields, switch weapons, duck for cover, and all sorts of other commands I haven’t figured out yet. And if I say ‘begin wave’, I ca- wait, shit, I didn’t mean that! Belay command! Belay command! 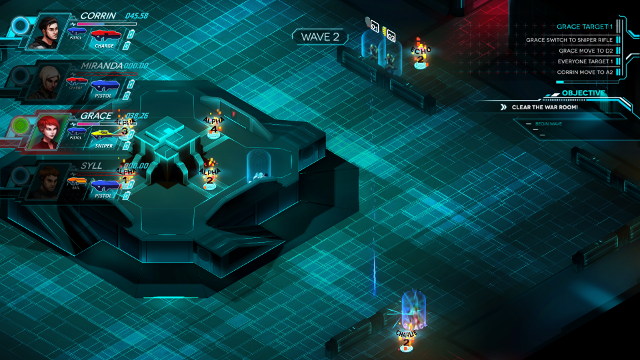 I end up spending a good half hour in the War Room, figuring out commands and playing with aliases. Grace has red hair, so she becomes Red. Sorry, red-haired women everywhere! That’s just how it goes. Miranda’s name, build and character all remind me of Mass Effect, so I name her Shepherd — because There Came An Echo can’t quite parse the alternate spelling. Syll becomes Steve. and Corrin… I name him ‘Handsome’ after deliberation, but my heart’s not really into it. He can just be Corrin. ‘Zoom to’ becomes ‘show me’, ‘recharge’ becomes ‘heal’, ‘all units’ becomes ‘all o’ y’all’. And one restart after every set of changes, because for some reason that’s the rules under which the War Room operates.

And when I’ve finally had my fill of the War Room — likely spoiling the early game proper for myself in the process — only then is it time for me to start the actual game. Computer! Play Game. 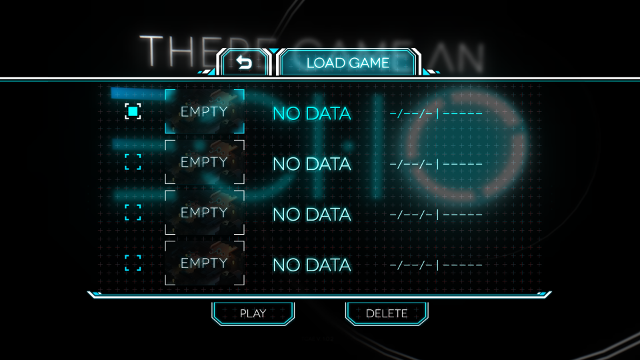 Yes, computer, just do save slot number one! Jeez, whatever.

Intro cutscene. A familiar voice — did I hear her in the War Room? — babbles on about gods and fate and locks, I think, while an oddly Bond-esque space animation plays out in the foreground. There Came An Echo is particularly keen to tell you all about the voice actors it managed to snag… but then again, I guess that can be forgiven if that list involves actually well-known talent. 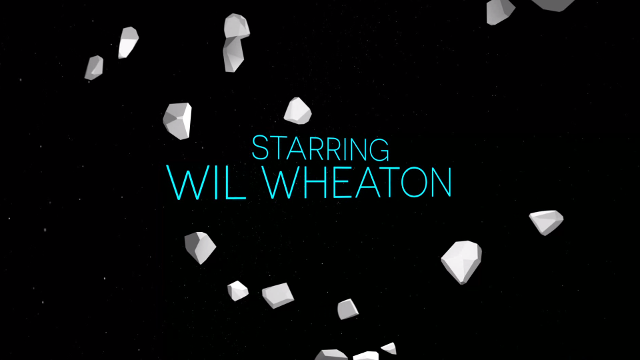 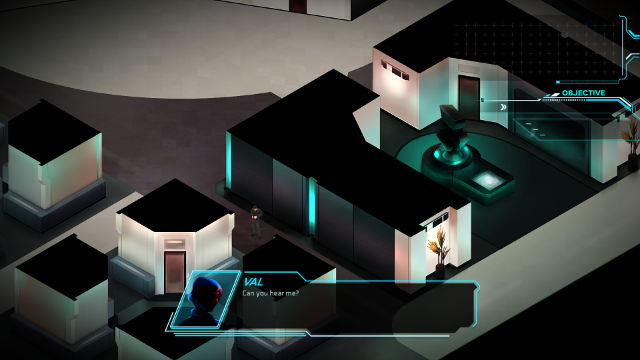 After all the grand talk of destiny and space, I, er… expected more.

“Can you hear me?” asks a silhouetted woman called Val. Hi Val! I can hear you just fine, but I don’t think you can hear me just yet. But hey. Nice to meet you!

Val ‘introduces’ herself with the phrase “I’m Val”, as if that means anything. She then quickly proceeds to explain that she’ll ‘handle communications with the field’, whereas I get the ‘easy job’ of ‘tactical support’. Again, as if this is at all meaningful. Talk to me here, Val. What are we doing? Who are you? Who am I? And what’s the deal with this open-plan office? I ask several questions out loud, but Val either doesn’t hear or — more likely — doesn’t care.

Val very quickly briefs me on the basics of voice control, the intricacies of which I already picked up on in the War Room. “Try saying “Val, stop talking.”” she teases me with, after which a clear read-along bar indicates that I’m expected to actually follow her commands to the letter. 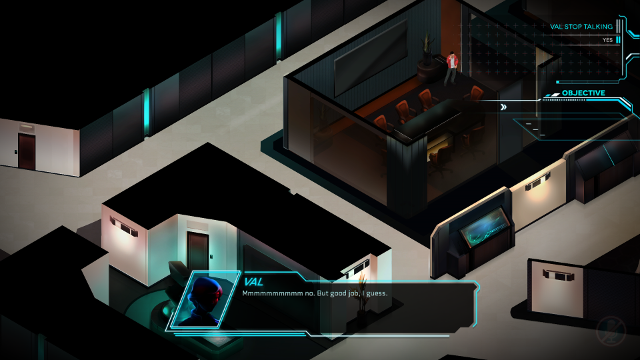 And that I’ll happily be ignored if the order recipient doesn’t feel like listening.

While all this goes on, our unexplained bird’s-eye camera pans across the office. It finally comes to a stop over a guy with a grey hoodie and familiar-looking. “We have to help this guy”, Val offers, “his name is Corrin.” Yeah, I thought he looked familiar.

Val calls a cell phone number, so quaint and old-fashioned! “Hello?” answers Wil Wheaton, just as Corrin picks up his cell phone. Boy, what a coincidence!

“Did you know there are men coming for you?” Crikey, Val, you’re not one for subtlety, huh? Unsurprisingly, Corrin hangs up from his presumed crank call, and it takes a second call for Val to pull the old ‘I know a lot about you, so pay attention to what I say’ trope. 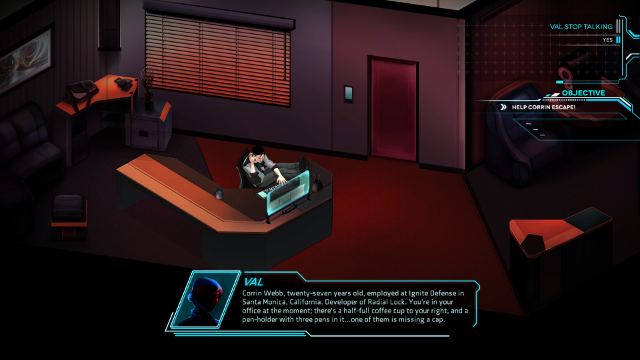 Is this a trope? I feel it should be a trope.

Val warns Corrin, again, that there are Angry Men moving to his office. Somehow, this turns into a discussion about an apparently-impossible-to-implement security algorithm. Corrin, Val, is now really the time? Nevertheless, after some persuading, Corrin is open to the idea of at least temporarily moving offices. And I get to do the honours of telling him where to go! 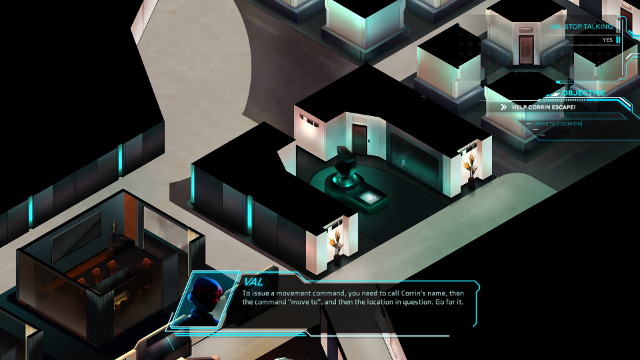 No, I don’t know why Val needs me to do this, either. Just roll with it for now, yo.

Some more talking and walking happens. I learn about timed commands! Then, Corrin and Val babble about the absurd impossibility of Corrin being chased by the scare men in black who are, in fact, chasing him right now. The whole thing is so silly and convoluted that I can’t help but sigh… which There Came An Echo interprets as me saying ‘pause game’.

I unpause the game. Two seconds after I do so, Corrin audibly sighs. There Came An Echo interprets this as me saying ‘pause game’. 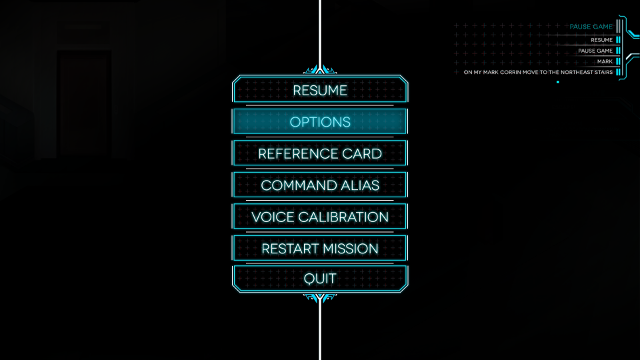 Oh shit, more guys! Corrin takes off in a run. He approaches an intersection, and Val yells at me to yell at him which direction to go. Left or right, Corrin? Left or right? I freeze, for too long a moment, because how the hell am I supposed to know which way is the right one? Corrin, bereft of my guidance, barrels straight on ahead, into the waiting arms of the men in black. They zap him. Whoops!

Sigh. No, There Came An Echo, not ‘Pause Game’. Actual sigh.

After a few tries, I manage to get Corrin onto some emergency stairs. There, he starts ignoring my orders… 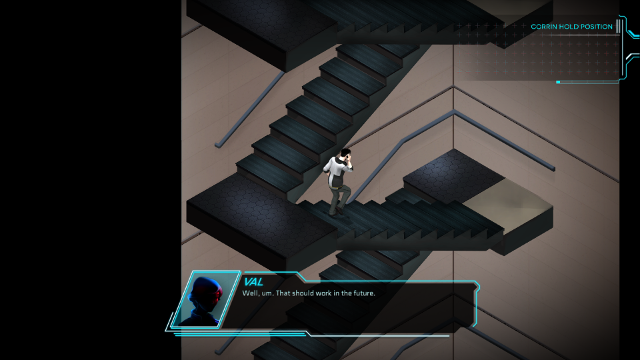 Why am I even here?

…and gets himself shot for the effort. 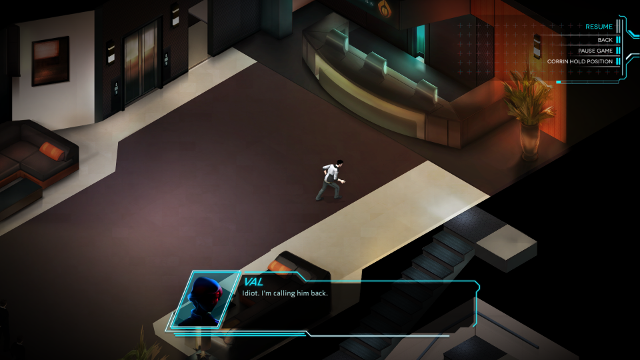 Oh yeah. To prevent *that* sort of stuff from happening.

Finally, Val and I get Corrin’s dumb ass into a car. Well, mostly Val: I haven’t done anything since ineffectually telling Corrin to stop moving. But that’s alright! I’m sure my moment will come. Any day now.

In the car, Val and Corrin babble about crypto-security some more. Blah blah blah, Corrin’s being chased for a thing he knows, he thinks it’s impossible, it clearly isn’t, Corrin. I’m more or less entirely out of the loop at this point. I mean, I get to say hello once! 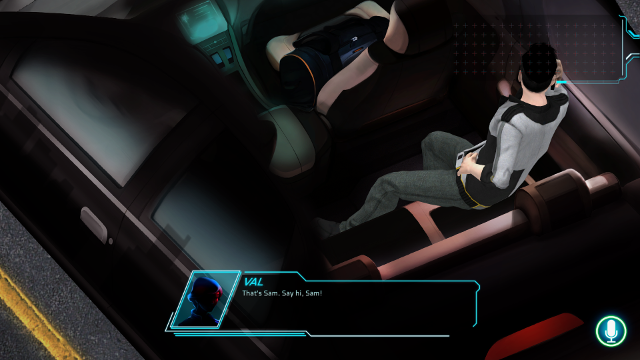 Val drives the car — remotely — to LAX, an airport I have mixed memories of. From there, Corrin is supposed to take a plane to a safehouse, in a way that will probably not at all involve violence and getting shot at. Which means I get to kick back and relax for this one! Val, you can take over, right? 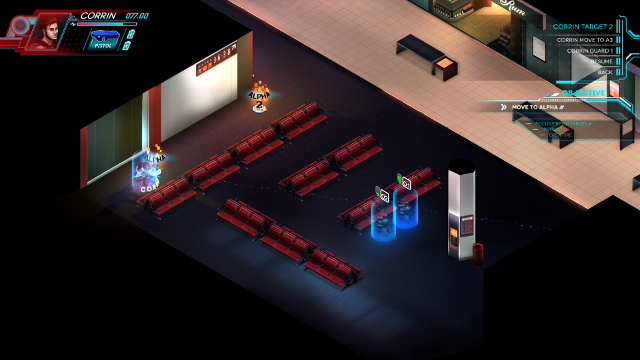 Yeah, I didn’t think so either.

Sig- I mean, ugh. Be back after I guide Corrin through this airport fight. And hopefully, after I figure out just what the devil is going on in this narrative.