(With a delay of a week and a day, Thanathos triumphantly returns to Dragon Age!)

When we left our heroine last week two weeks ago, she had just been recruited to battle the Blight — an army of nigh-mythical Darkspawn seemingly bent on worldwide destruction — as the newest member of the equally nigh-mythical Grey Wardens. Her recruiter, an orange-named badass with a thick beard and a unique armor texture.

After, of course, we slaughtered our way through the local lord’s castle and killed off his only son in a fit of arrow-fueled vengeance. It’s kind of our thing. Now, saved from one death sentence by another probable death, we said our goodbyes to our friends, family and loved ones and returned to our new Warden to gallivant off the save the world by catching Darkspawn arrows with our face. 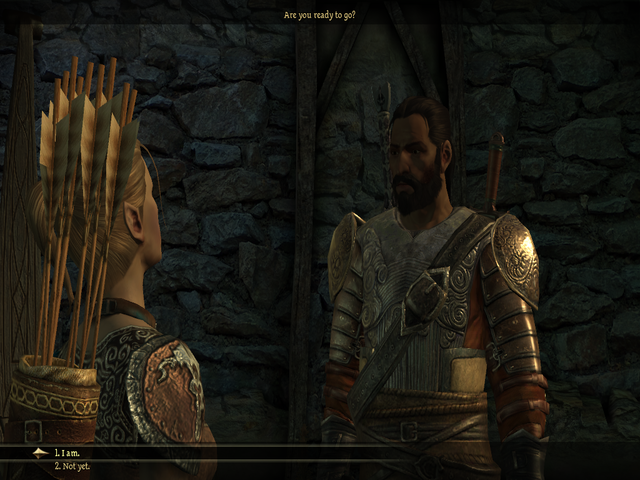 The Darkspawn horde is massing in the south, near the ruins of an old fortress called ‘Ostagar’, originally built in the pre-Darkspawn days to keep barbarians from creeping north into the Imperium. It apparently failed, because the country of Ferelden seems to have carved out a sizable chunk of territory. There’s still wildings in the area, though they’ve mostly fled from the Darkspawn forces.

I actually recorded the cinematic describing all this to the characters, but the file may or may not have been corrupted, so you get expository text.

Duncan of the Orange Name walks right up to the ruined fortress and, apparently unperturbed by any guards or watchmen, happens to find himself — and the armed member of an oppressed species considered subhuman and often finding themselves coming to blows with humans with a noted history of murdering human nobles in their homes — walking right up to the king. 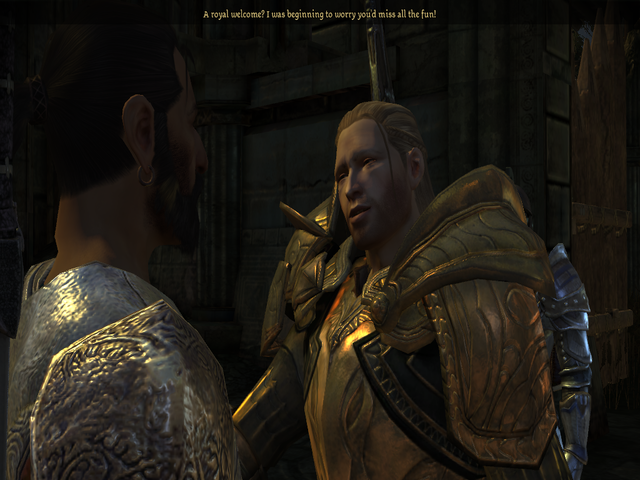 Man, the Ferelden Secret Service has a difficult job.

Golden Boy up there is His Majesty, King Cailan the Second of Ferelden and apparently the only person who believes that the Darkspawn are actually going to go ahead with that whole ‘Blight’ thing. You’d think that pretty much every kingdom in Thedas would be concerned about nigh-unstoppable demon-monsters made of nightmares and poison, but nope! This is apparently a Ferelden problem, and the Ferelden King seems to think he’s on vacation. “I was beginning to think you’d miss all the fun!” he smirks, before acting like a rich kid who just met his favourite pop star.

“You brought a new recruit!” the king observes, like a child opening presents on Christmas morning. Duncan gets all ready to dispense with the formal introductions when Cailan cuts him off again. 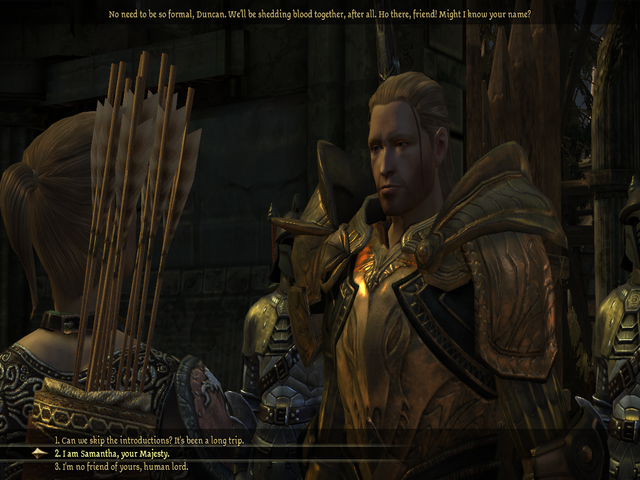 Wait, ‘shedding blood together’? They’re actually going to let you fight? Have you named an heir?

Samantha introduces herself through clenched teeth and, with an enthusiasm that can be charitably described as ‘grating’, the kind points out that we’re an Elf, and asks where we’re from. Now, there’s really only two places that Ferelden Elves can be from — one of the Alienage-ghettos or the Dales. “One of your alienages, naturally.” Samantha gives up, with what I imagine to be a level of biting sarcasm that Cailan is either too thick or too inexperienced to notice. 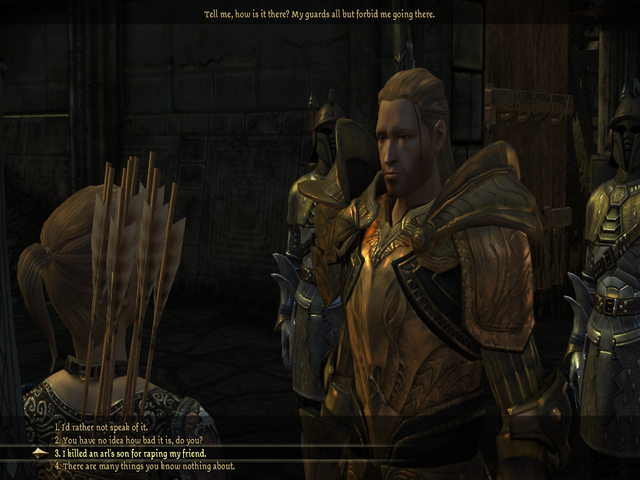 That sound you just heard was all pretense of respect and caution being chucked out the nearest window.

Cailan takes a half step back and practically begins blubbering incoherently before Duncan steps in. “I would not have put it so bluntly, your majesty” he offers.

Don’t think I didn’t catch that you’re scolding me there, Duncan, but screw you. This is shit the king needs to know happens. Elven Lives Matter. Cailan, for his part, promises to look into the matter but “we have a war to attend to” for now, so he formally welcomes me to the ruin and retires to his tent so some guy named Loghain can “bore [Cailan] with his strategies”. But not before boasting that the Fereldens had “won three battles” against the Darkspawn already and worrying — I kid you not, actually worrying — that this isn’t a “True Blight”.

In my first playthrough, this line was the real kicker that started an irrational hatred of Cailan. Strategies are important! I was more than a little bit upset that my nobleman warden couldn’t tell the king off for his hubris.

In later playthroughs, I learned to actually like Cailan a little bit. He’s one of the few honest people in Thedas who is trying to do the greatest good for the greatest number of people.

How do you win a battle against an ancient, implacable and infinite foe, anyway? Without them disengaging, I mean. Which would suggesting a guiding intelligence, since the Darkspawn are notoriously directionless when there isn’t a Blight on.

Duncan and I begin walking to the camp proper, and — Wait a tic. The king is hanging out at the edge of camp, just waiting for a Grey Warden to stroll up unmolested, with a completely unknown factor in the form of a new recruit? This is far from an optimal way to set up your camp, guys. Even if the commander is on your ‘rear’ flank, you can still, quite easily, have your enemy send a small detachment around to get their assassination on.

This continues to go conveniently unmentioned by everybody.

“Everything the king said is true.” Duncan informs me. “They’ve already won several battle against the Darkspawn here.” 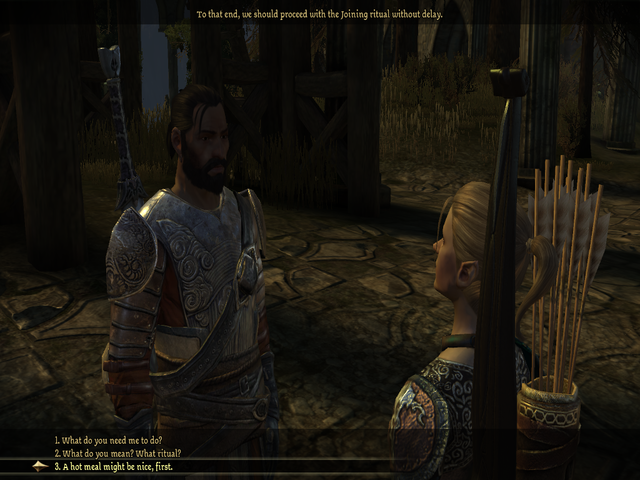 He appreciates and shares the desire for some hot food, but nobody does anything about it.

Wondering what the ‘Joining’ is? No worries! Despite not asking, Duncan rattles off a quick explanation that it’s a ‘secret ritual’ that every recruit must go through. I’m pretty sure it involves deep hooded robes and engraved paddles, but Duncan isn’t telling. My second job as an official Grey Warden Conscript (Besides, y’know, the whole marching here and gathering kindling things) is to go fetch the other Conscripts and bring them to Duncan so we can prepare for this secret ritual. Easy enough to do. 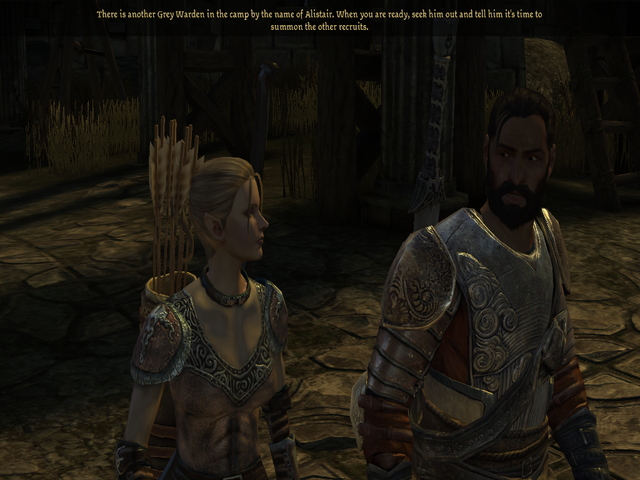 “Oh, and be a dear and find literally the only other full Grey Warden in the country, won’t you?”

With that, Duncan leaves me at the end of a bridge with a vague nod in the direction of our ‘tent’. (Spoiler: There is no tent. We have a bonfire.) He then scurries off, leaving me all alone in an ruined fortress staffed by human soldiers who think Elves are inferior and shouldn’t be armed. 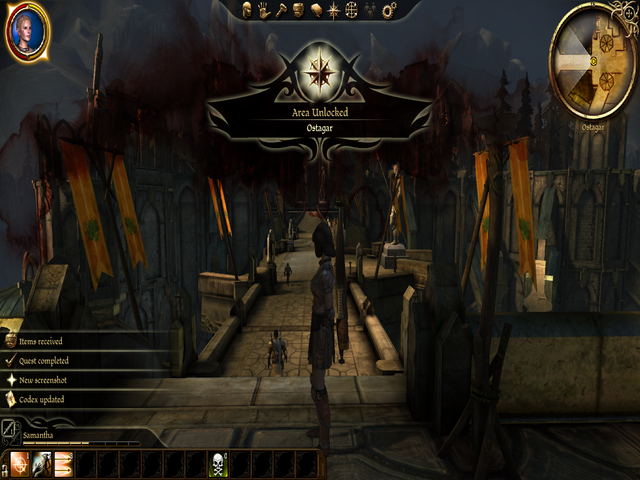 This should be a blast.