Guys, listen up. I know fedoras have something of a bad rap, by way of association with douchebags, which may or may not be in any way deserved. And I wouldn’t hold it against you if you instinctively steered away from any game that holds fedora-wearing as important enough to feature it in the title. But here’s the thing: in Hot Tin Roof, second successful project of Glass Bottom Games, the fedora in question is worn not by any old boring human, but by a cat. And I am indubitably a cat person. I’m not just so much a cat person that the cat part cancels out the fedora part; no, I’m so much a cat person that the cat part actually overpowers the fedora part, making the fedora seem fluffy and adorable by association! Which means that suddenly, through the magic of resolved cognitive dissonance, Hot Tin Roof: The Cat That Wore A Fedora consists not of one cool element and one meh element, but of two cool elements. And one hot element, ho ho ho. Seen through that lens, it only makes sense that I’d play it eventually.

Oh, and I also backed Hot Tin Roof on Kickstarter. There’s that, too. I had plenty of fun with Glass Bottom Games’ previous project, Jones On Fire: Kitties Are Cute And Should Be Saved. And I occasionally crack wise at Glass Bottom’s founder, ‘Not That’ Megan Fox, on Twitter. Maybe these two facts also made me more predisposed towards playing Hot Tin Roof? Possibly. I still maintain the kitten element is probably the strongest factor here, though.

“Glass Bottom Games is proud to present…” White text on a black background informs me, as smooth jazz rises to fill the space between words. “A game made possible by 1,244 Kickstarter backers.” Hey, that’s me! I feel so validated. “Dedicated to PJ Swanwick. An unconquerable soul.” I don’t know who that is, but sure. Here’s looking at you, PJ. 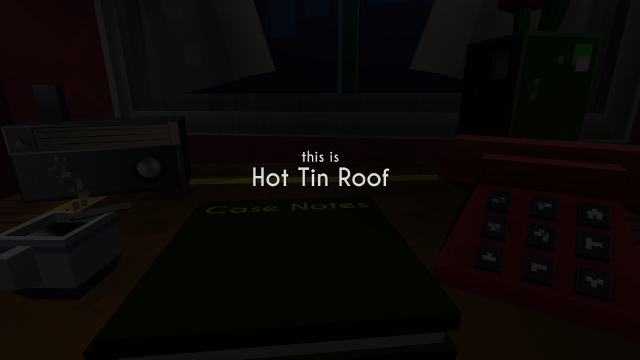 Hot Tin Roof, as you can tell.

A remarkably blocky desk stretches before me. A blocky ashtray holds a blocky cigarette, emitting blocky smoke. A blocky telephone with blocky pseudo-numerals obscures a blocky vase holding blocky flowers. About the only non-blocky thing on this entire desk is the radio control dial, which probably explains why this jazz is so remarkably smooth.

‘Push the Any button, or an XBox-style green A.’ Er, sure, Hot Tin Roof. Will spacebar work? It will? Excellent, you’re a pal.

The (blocky) Case Files book opens up before my eyes. It serves as a dual-purpose main menu and options screen, saving me the trouble of having to take two screenshots. And yes, that does imply that the options are compact enough to fit on a single book page. 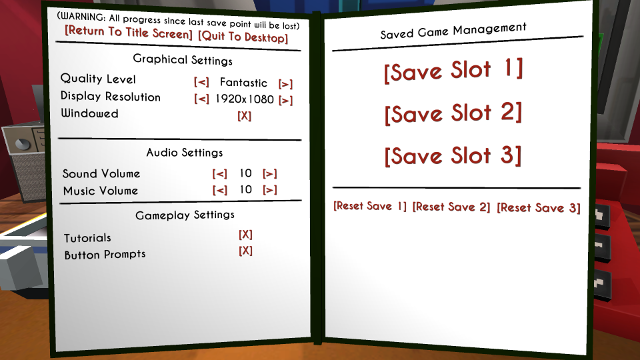 In fact, here they are.

I guess that means this section’s gonna be cut a bit short, given that I normally devote most of its space to pre-game kerfuffle. Might as well get started immediately, huh? Onto fedoras, and the cats who wear them! 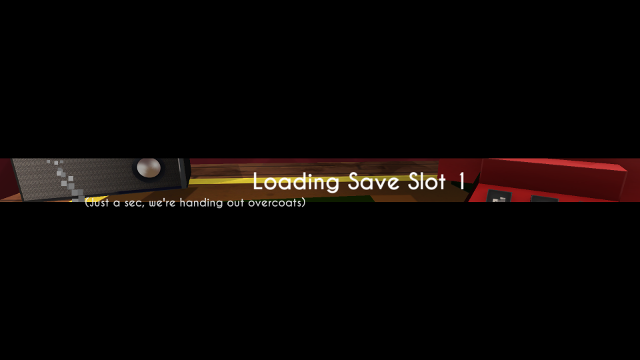 Apparently overcoats are involved as well. 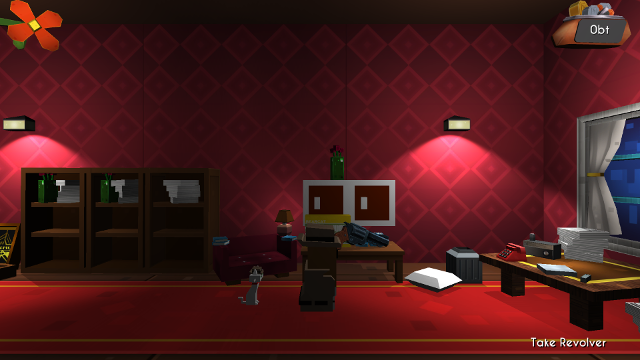 As expected, I enter a world of bright colours and straight angles. Save for radio dials and text, everything in this screen is blocky. Or more boxy, in most occasions. Even Fedora Cat’s tail is all 90° angles. I respect this kind of dedication to geometry, I really do.

Alright, let’s see what I have. Center-screen is taken up by a large, brown rectangular beam shape, clad in a beige overcoat and matching fedora. This person, because that’s what I’m looking at, reminds me a little of Jones On Fire’s Emma Jones, firefighter extraordinaire, who looked like this. Maybe the two are related?

Whatever the case may be, it’s clear from the surroundings that Beige Block Person here is some sort of private investigator. Just look at this office. The low lighting, the mess, the stacks of case files. The beige overcoat and fedora. The giant over-detailed revolver resting on the table. The bright red phone. Any moment now, I expect some dame with a bright red dress and legs for days to deliver a big helping of trouble to my front door.

That doesn’t happen, sadly. What does happen is… nothing, for a little while. It actually takes me a few seconds to realize that I’m not waiting for a cutscene to play out. I’m not gonna get any pre-game explanatory talk, then? It’s all me from the word go.

I attempt to control boxy-me. A and D walk left and right, unsurprisingly. Spacebar jumps. And what a jump it is! 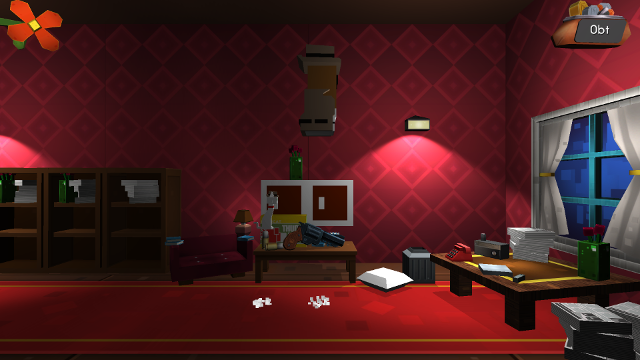 I walk and jump left and right for a little while, but still, nothing happens. Again, it takes me a little while to pick up on the large white phrase ‘Take Revolver’ that appears every time I walk past the giant revolver. And after that, it takes only a small detour to the Controls section of the options menu… 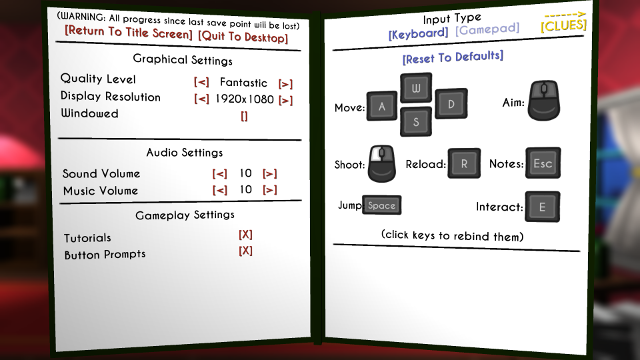 …which has magically appearified, now that I’m in the game proper…

…for me to understand that E totally picks that revolver up.

As I grab the gun, my characters start talking. Or, well, I say that… My cat friend spouts a dismissive text line about my gun. Hey, yeah, nice to meet you too. I, for my part, have the option to reply in one of two pre-approved ways. For reasons I’m not entirely sure about, one of these options is partially obscured by Franky-the-cat’s dialogue? Must be a style thing. 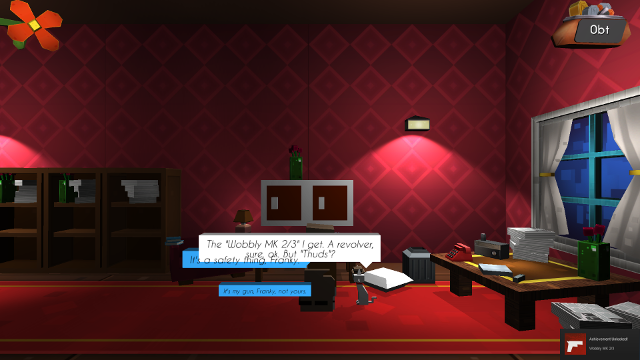 Or a bug, you know, whatever.

Okay, so this gun is loaded with non-lethal ‘Thud’ rounds. Thanks for the exposition, Franky. But I can still break stuff with them, right?… Well, not in this office, I can’t: I fire my gun four times, at four different angles, but the only tangible result I get is Franky getting knocked back and mewing at me somewhat annoyed. And then, my gun is empty. And I have to manually reload every bullet. 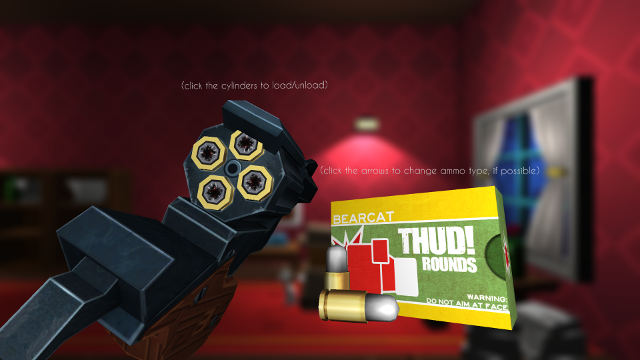 But okay, fair enough, I have a gun and I know how to use it. What next?

What’s next is that I should probably answer the phone, which has been ringing for the past ten minutes. Oh yeah, did I forgot to mention that? All the while during my complaining about lack of direction, the phone’s been ringing constantly. I guess I just… tuned it out, mentally?

I answer the phone. 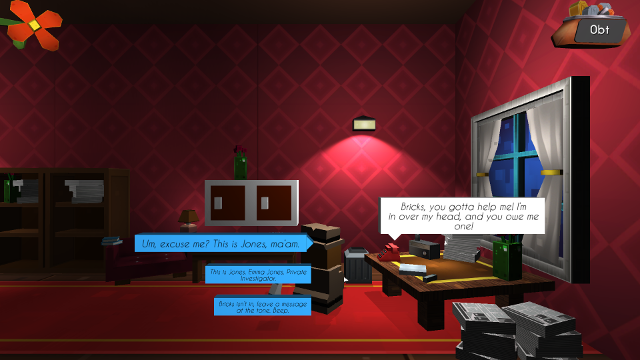 “Why yes, my refrigerator *is* running, why do you ask?”

Long story short: there’s been a murder at the Ossified Egg penthouse! And while she may not have been the caller’s original choice, private investigator Emma Jones — wait, is she the original kitten-saving firefighter? — is on the case! For justice, and glory, and also because we haven’t made rent yet this month! 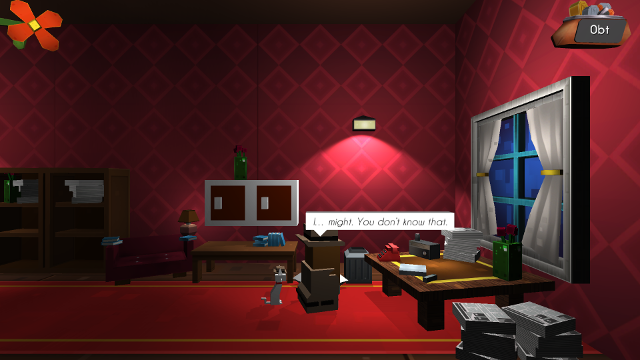 Now how do I get out of this room? 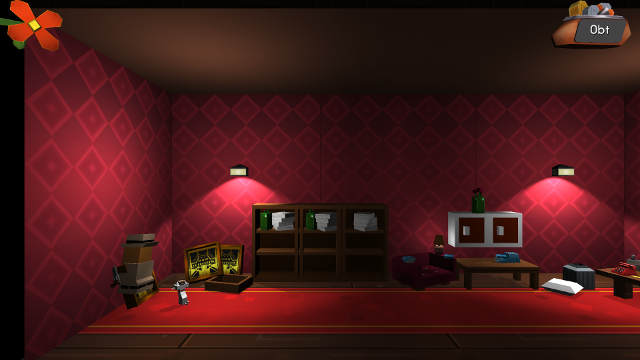 Not this way, that’s for sure.

Oh, wait, I see: walking in one section of the room makes a little downward arrow appear. And if I press S while walking there… yeah, that makes me exit the room. Finally, I’m free from the confines of arbitrary walls! 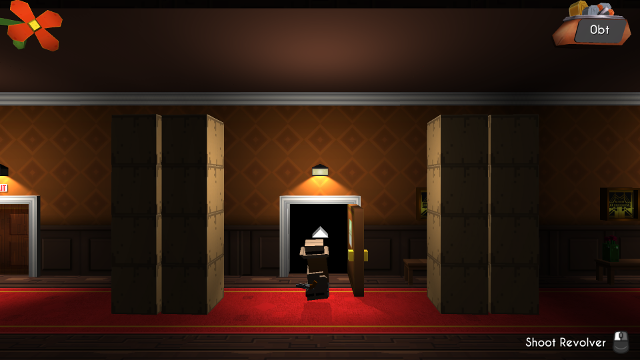 Boxes, huh? Well, I don’t know who thought it’d be funny to box me in here like this, but let me tell you this: my revolver’s Thud rounds might not be able to break anything really solid, but they can shred a cardboard box into literal nothingness easily enough. And hey, I even get access to the copper coins inside ’em.

Franky and I briefly stop to chat with Patrolman Pips, who tells us it’s common practice to ‘prank’ a newly promoted investigator. No, not me, Franky. I offload the responsibility of box-cleaning onto him — or rather, I would, if I’d left any boxes in one piece — and then it’s off to the Ossified Egg penthouse! 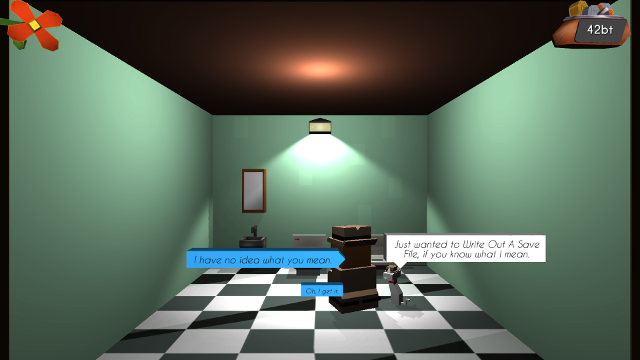 Emma does not know what I’m saying.

Franky inadvertently raises an excellent point: why would I run out to some weird penthouse, if I haven’t even explored the entirety of this building yet? So, instead, I do that. I walk downward, into the bowels of the Depot, where I see empty cells and meet an old-timer gunsmith. And then, I walk up, where I meet with the enigmatic Chief of Police. What’s his name? I don’t know. Nobody knows. If only some kind of handsome, clever private investigator had some off-duty time to figure that mystery out… 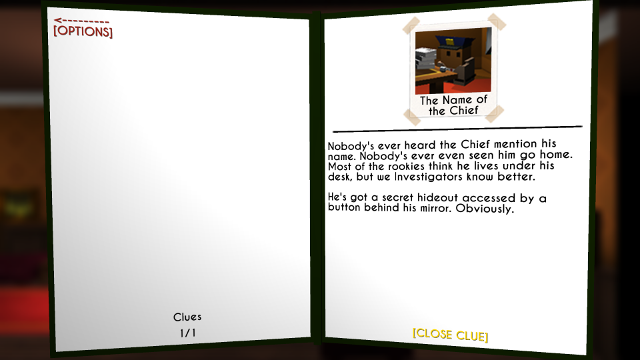 Maybe some other time.

But seriously, we got shit to do. Time to exit the Depot and head to the Ossified Egg penthouse.

As soon as I figure out where that is. 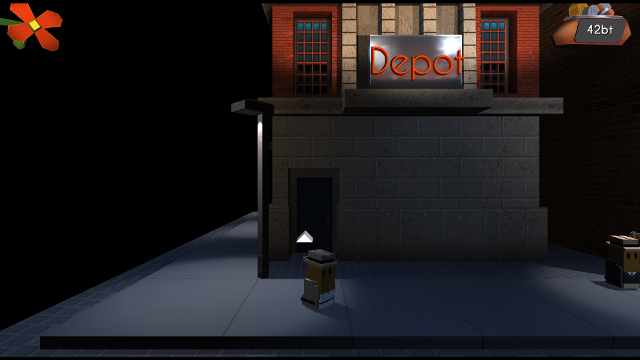 Wow, look at that. Three dimensions for real!

Okay, so the Ossified Egg isn’t that hard to find. I try walking right from the Depot, but there’s a roadblock not five steps out. Walking left instead makes the world spin around, all Fez-ian, and takes me to the Ossified Egg on a path that’s much more linear than I initially figured it would be. For some reason, all the interesting-looking side paths and alleyways are blocked off right now. Something about a political rally? A cat running for mayor? Demonstrations? 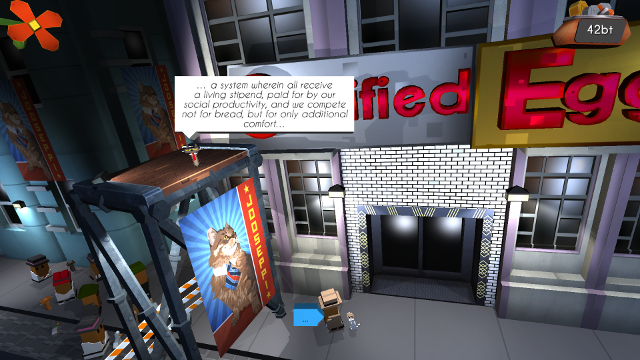 But hey, it’s all fine by me. I’m at the Ossified Egg, I don’t really need to be anywhere else.

In the Egg’s penthouse, the case is laid out for me. Apparently, I’m to… find some sort of will? I seem to remember being called here on the pretense of their having been a death, but sure. I guess ‘my dad died and I can’t find his will’ technically has a death in it, so hey.

I talk to the leading lady, Shelly Bundt, who bosses me around with her money and clout. Then I talk to her cat, Button Bundt, who hints at Franky’s dark and mysterious past. I feel I should be more upset about this than I am, but come on. This is a noir story, there’s bound to be some dark and mysterious past involved. For every character. Third pigeon on the sidewalk just now? He’s seen shit you wouldn’t believe.

I start my exploration of the strange, Escherian penthouse. 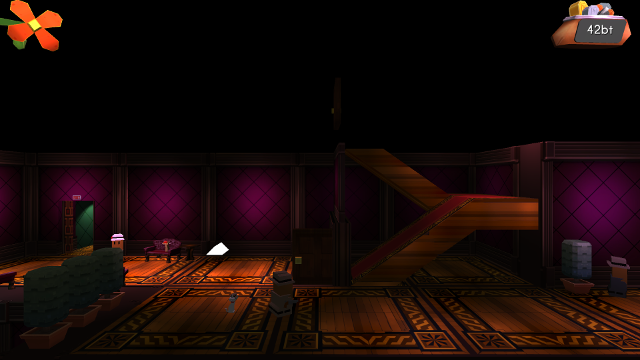 This place is a little strange, know what I’m saying? 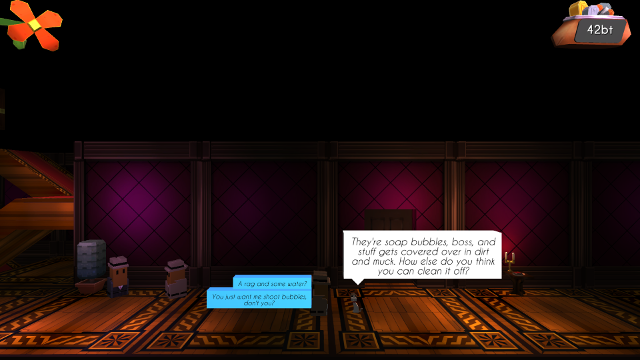 I wander through the penthouse. It’s fancy, and purple, the colour of wealth. I enter many rooms, sometimes throwing my perspective and sense of direction for a loop as the world shifts on its axis. And, crucially, I find the tell-tale sparkles of hidden… levers, I guess? 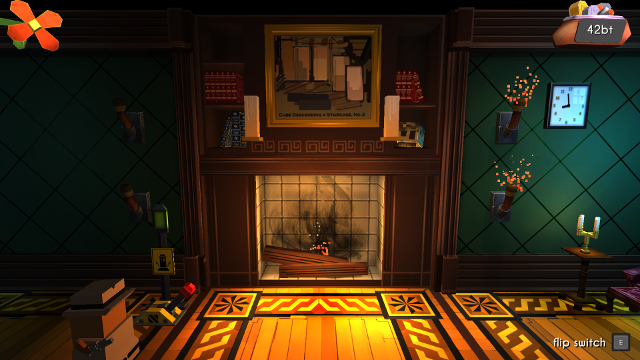 These industrial-looking levers seem out of place a little in the fancy penthouse. But then again, what do I know about the tastes of the rich.

Four hidden levers. One wall with four torch sconces. Each lever fires up one torch. Gee, I wonder what will happen if I activate all four of them at once… oh, wow, the wall reveals a hidden chamber! WHO WOULD EVER HAVE SEEN THAT COMING.

Well-played, Ed Bundt, but private investigators Emma Jones and Franky McNoLastName have found your hidden lair! And I’m willing to bet my career on the will being stashed right… there… somewhere… 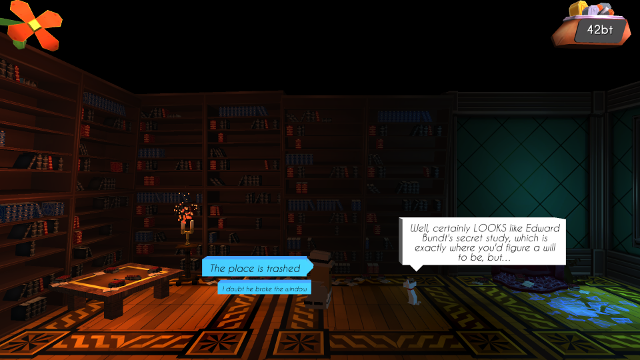 Hmm. The unreachable study’s been trashed. The window has been shattered, from the outside in, the place has been ransacked, and the will is nowhere in sight. This case just got a whole lot more complicated.

Be back when I’ve figured out how anyone could have climbed a 40-story sheer skyscraper wall without access to helicopters or a jetpack.