When we last left off, Samantha got scary. Not by finally making good on all of her murder and arrow-based threats (though she’s getting to that part), but by making a dry ‘bright side’ quip on seeing her fiancé getting brutally slaughtered while on a mission to rescue her. 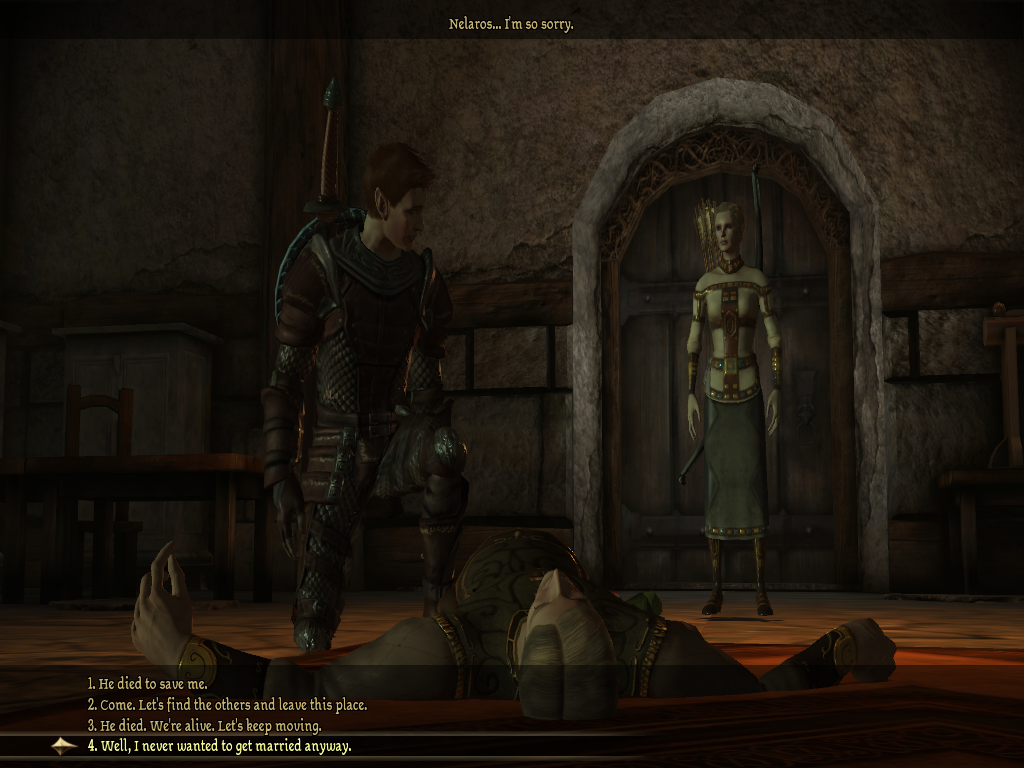 And, in continuing my long-standing tradition of re-using screenshots, here’s a reminder.

Anyway, there’s more damsels to rescue from dragons, so there’s no time to mourn, only to loot. Soris and Samantha immediately fall into the optimal ‘sword-and-boarder plus one archer’ combat tactic of charging down hallways. 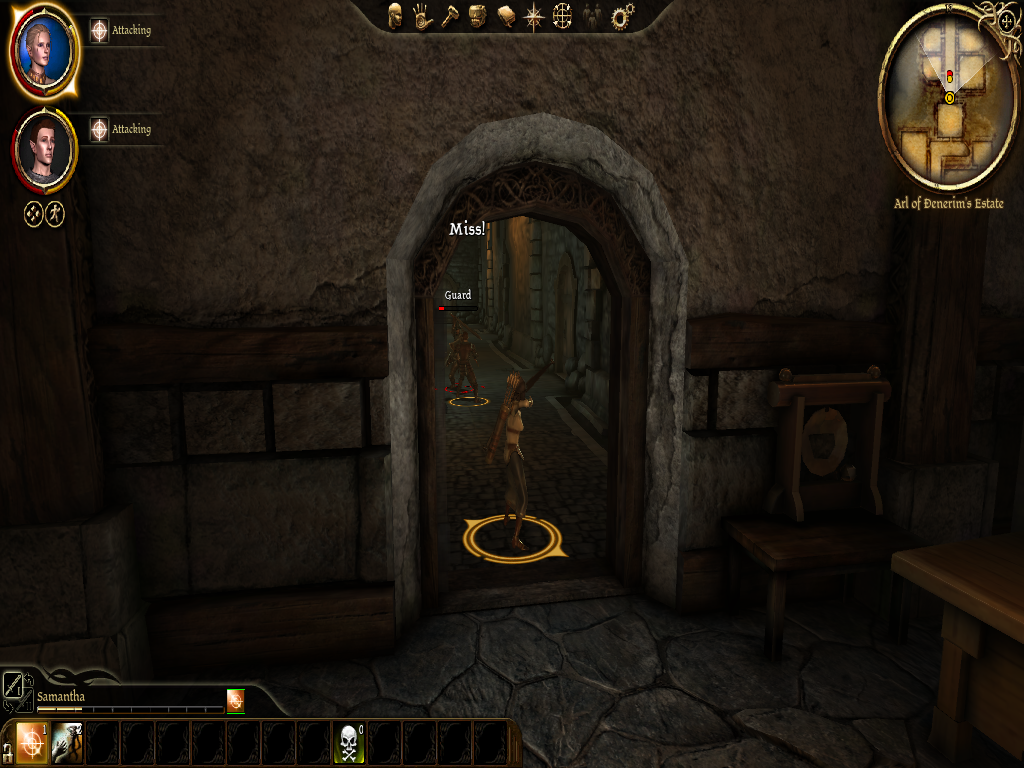 Fortunately, there’s no such thing as accidentally hitting your ally with arrows in DA:O.

Now, you see… we could, theoretically, immediately charge forward to von Dickface’s quarters where the captives are being held. But there’s a couple of practical concerns preventing us from doing so. Namely, Experience Points and Loot. We need and/or want both.

Of course, it’s been a while since I’ve played this Origin, so I’ve forgotten which room has all the armor and weapons in it. And the very first room I open has a pair of dog trainers with a Mabari war hound, and two more in wooden cages.

Now, in the lore, it’s explained the Fereldens love them their dogs. Dogs – especially Mabari – are all over the place in Ferelden art, history, and culture. Insulting a Ferelden’s dog is the quickest, surest way to pick a fight, so it makes sense that the Arl has trainers and a kennel full of dogs on hand in his estate. It’s just a shame that ‘fighting Mabari’ is, with a single exception, the only time we interact with dogs at all during more or less the entire Dragon Age series thus far (at time of writing, I haven’t finished Inquisition yet). 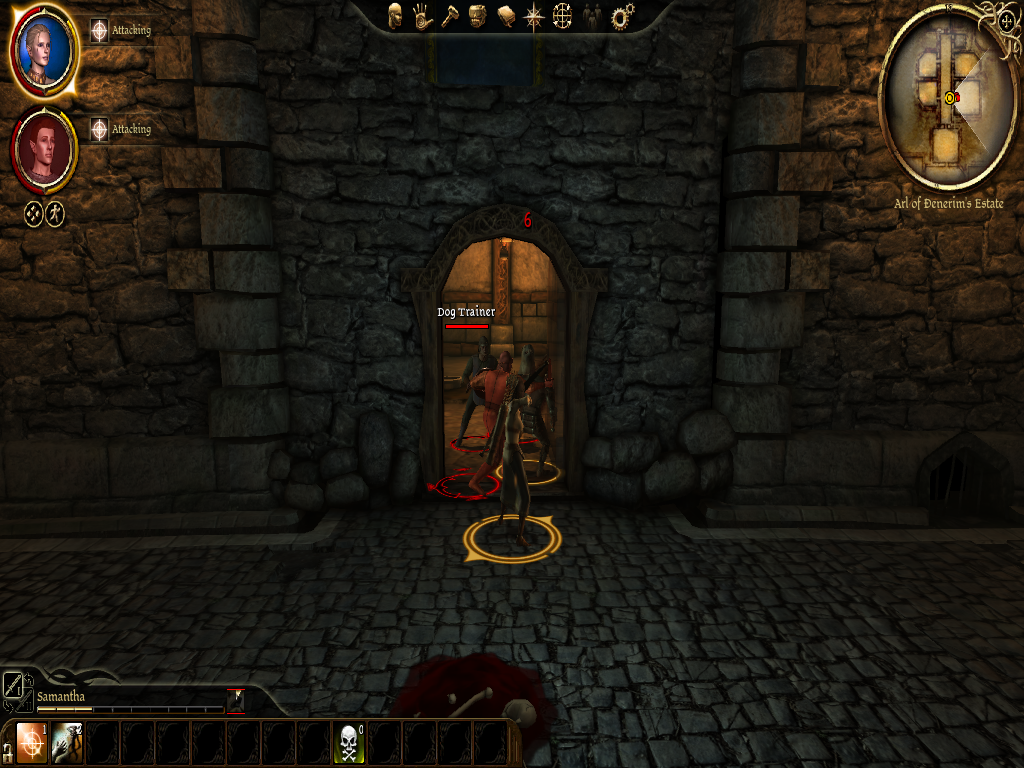 Soris protects me in this fight, as he does most fights, by blocking the door with his body.

We wipe the floor with the dog trainers and the loose Mabari they sicced on us, which just leaves us with two Mabari in cages. Now, readers, let it be known that I, like most modern humans who grew up in a Western society, absolutely love dogs. Including and especially the big, stereotypically aggressive breeds. My family had a shepsky and a chow-retriever while I was growing up, and they were just, like, totally the best dogs. And I do try to inject morals into my gaming sessions, it’s one of the big reasons I’m a fan of less-than-lethal options in my video games.

That being said… roleplaying-wise, Samantha is really, really angry at Von Dickface. And those Mabari are worth precious experience points. So… 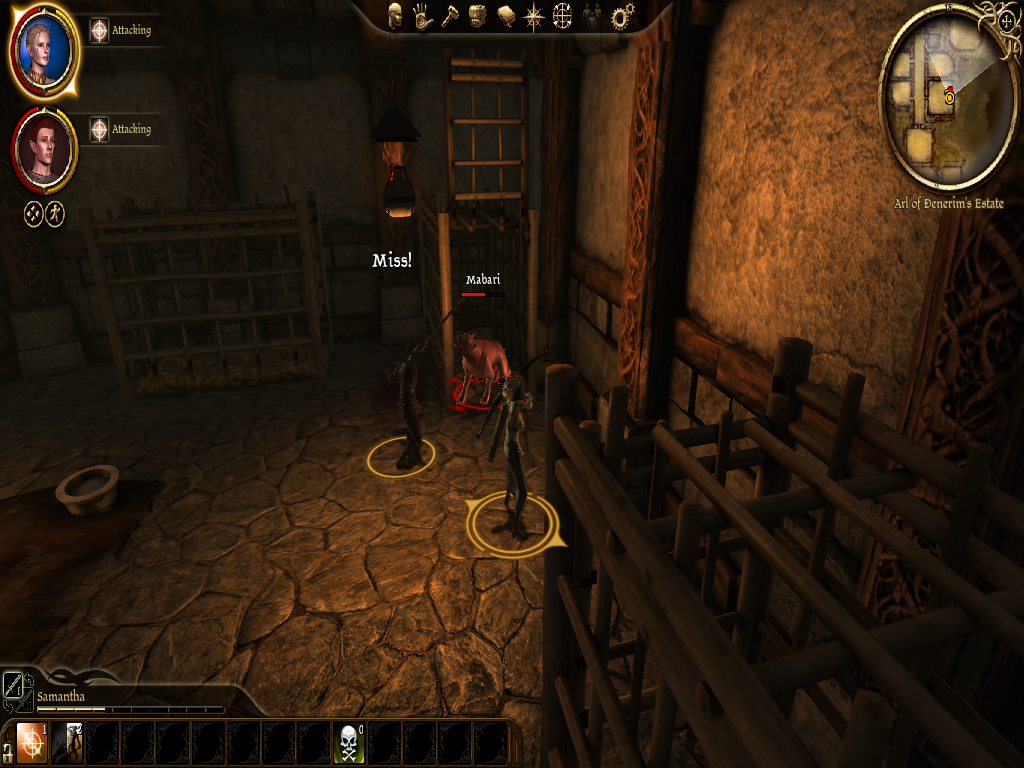 With apologies to fellow dog-lovers everywhere.

Samantha does what could be charitably called ‘sending a message’. The Arl of Denerim is a terrible father. The armor we wanted was in the next room, and instead of slapping on some suspiciously well-fitted leather armor, Samantha just opts to wear the armored cap for the rest of the mission. Mostly because I really enjoy the blood-stained wedding dress trope.

There’s really not much to say about this entire section of the origin. All the plot and character development and scene-setting were done right up front, and we get a hefty dose of combat right here, towards the end. Still, there’s a few absurdities to point out, mostly with how the graphics work.

For example, it turns out Samantha might actually be a mage, because she has the ability to have arrows make sharp turns in mid-flight to stick this poor guard in the back: 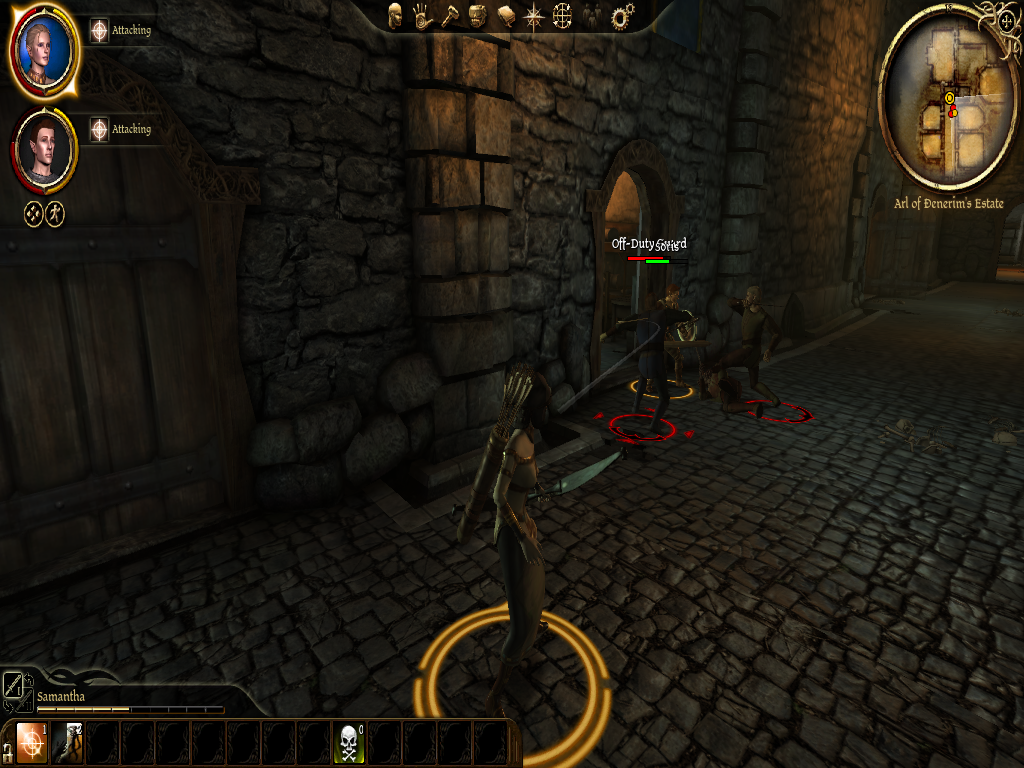 All archers can actually do this, but shut up, it’s mildly amusing.

Also, during one amusing section, when faced with a lone crossbowman standing at the far end of the hallways, Samantha and the guard decide to have an impromptu archery contest TO THE DEATH. The AI isn’t programmed to run away from a fight that they’re obviously losing, fall back, heal, regroup, or really use any real combat tactics. Because, let’s face it, we need the AI to be a little bit dumb in order for games to have a playable win state, or absolutely nobody would succeed at these things, ever.

The interesting side-effect of this was re-learning that, if you engage an enemy outside of your ally’s threat range, he’ll stand there, sword drawn, while you plink away at each other. 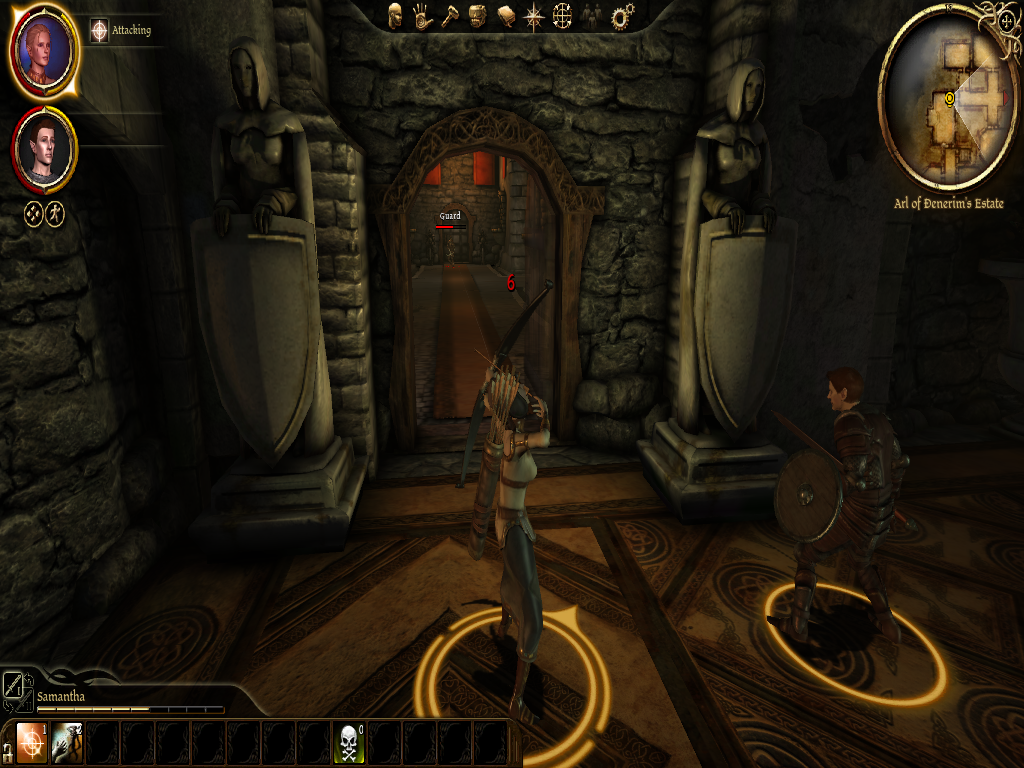 I have something like six screenshots of this, thanks to the program which automatically takes screenshots for me.

Eventually, the level designers decide that we’ve slaughtered our way through enough of the castle, and, with loot and experience points thoroughly stuffing our pockets and/or brains, the game tells us about its conning system.

‘Conning’ — a term that, as far as I’m aware, stems from MMORPGs — is the system by which different levels of threat have colour-coded names to indicate their strength relative to ours. White is typically the ‘fair challenge’ colour, and here in Dragon Age: Origins, it means ‘standard enemy’. There are, however, two other classes: orange names, for example, indicate boss-level encounters.

Hey, remember what colour Duncan’s name was? That’s the game telling us, mechanically, that Duncan is an absolute badass.

The only other colour DA:O uses is yellow, to indicate the tier between standard enemies and bosses. Whether our want to call them elites, lieutenants, or mini-bosses is up to you, but I, personally, tend to favour the term ‘elites’. Because it’s the quickest to type. We run into our first elite soon hereafter, given the appalling and intimidating name of… ‘Bodyguard’. 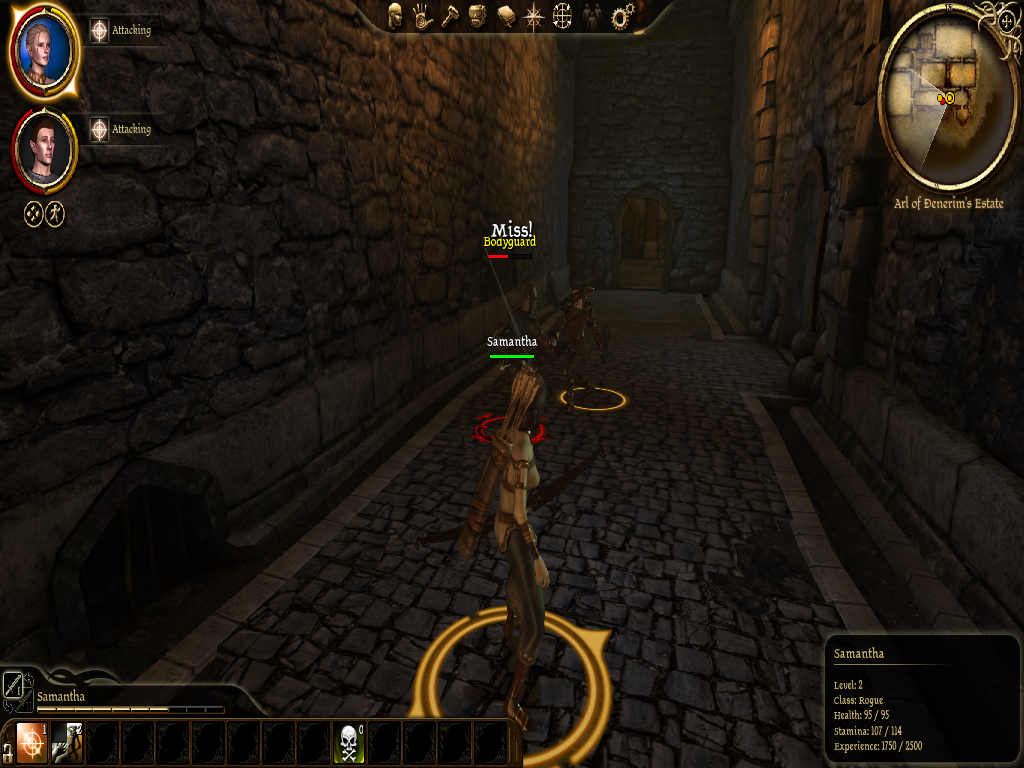 Look, they can’t all be winners, okay?

We beat back Bodyguard with our superior force in numbers, slight statistical advantage, and reckless disregard for our stock of health poultices. We then barge into von Dickface’s chambers, where Drunk Cousin Shianni is weeping on the floor, surrounded by three burly, armed men. One of them — von Dickface, himself — has a yellow name. 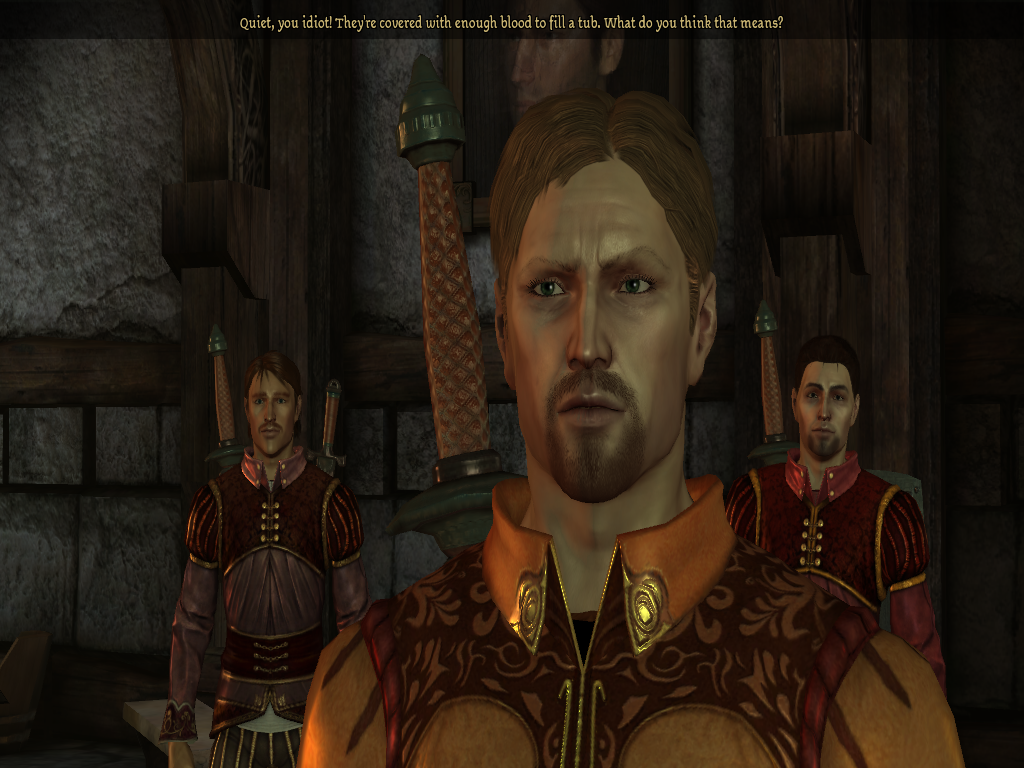 Dragon Age doesn’t do grey names for significantly weaker foes, but if did, these two losers would have them.

Von Dickface decides that now is the tie to start being reasonable, but only because I’ve slaughtered my way through his home with arrows I nicked from the still-warm corpses of his father’s personal army. What I’m saying here is that he’s trying the whole ‘rich guy tries to bribe his way out of trouble’ trope. As is my custom, I decide to let him lay his offer out on the table, even though I know precisely what it is and I have no intention of taking his deal.

For those of you who haven’t played this Origin, the deal is thus: he pays you forty sovereigns (that is to say, ‘gold pieces’) to not kill him, and he lets you go back to your alienage. The place isn’t burned to the ground, and you skip town. Now, 40 gold is a not-insignificant chunk of change, and that’s not just for the early game. If you want to keep your entire party of characters you end up in top fighting shape, and not just the four you pal around with the most, end-game armors cost less than 40 gold apiece. Stat-boosting tomes, on the other hand, run about that much each, if I remember correctly.

This is a significant chunk of change, and easily more money than either Samantha or Soris has seen in their entire lives. Then the game gives you the chance to ask the million-sovereign question: 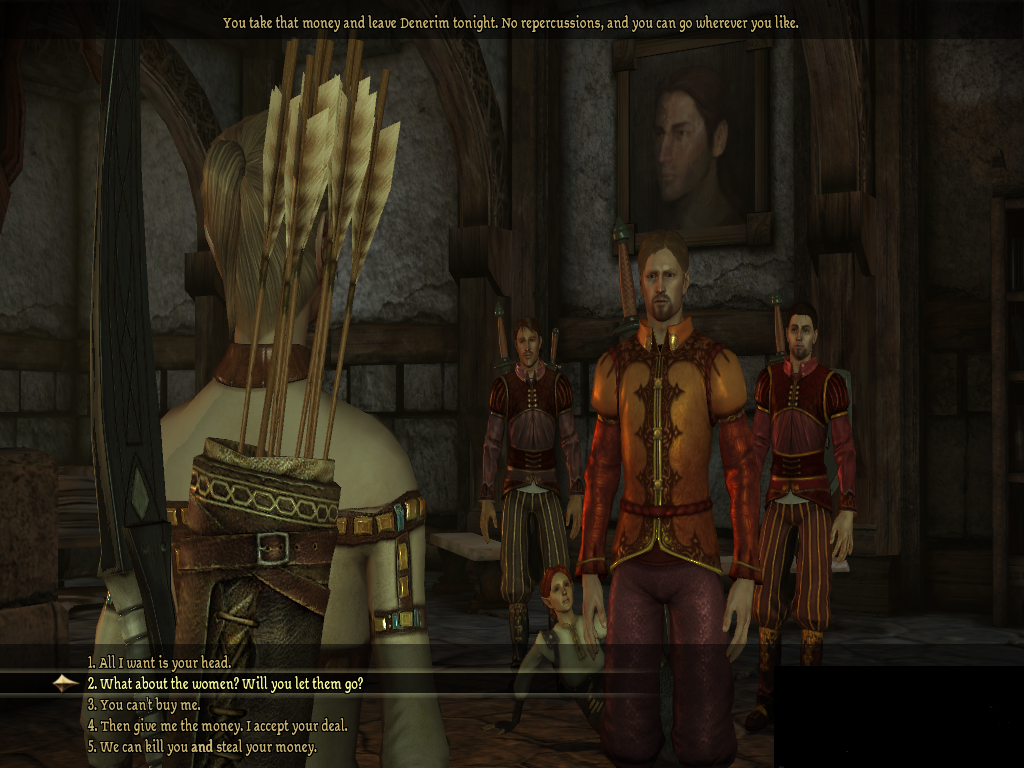 Turns out, he won’t. “They’ll be returned”, he promises “slightly worse for the wear”, but insists it’s not something I should worry about. Because, as per the deal, I’d be far away by the next morning, running myself out of town and all. The option to kill him and take his money is brought up, and he more or less shrugs, explaining he doesn’t have it on him. It’s hidden away. Duh. 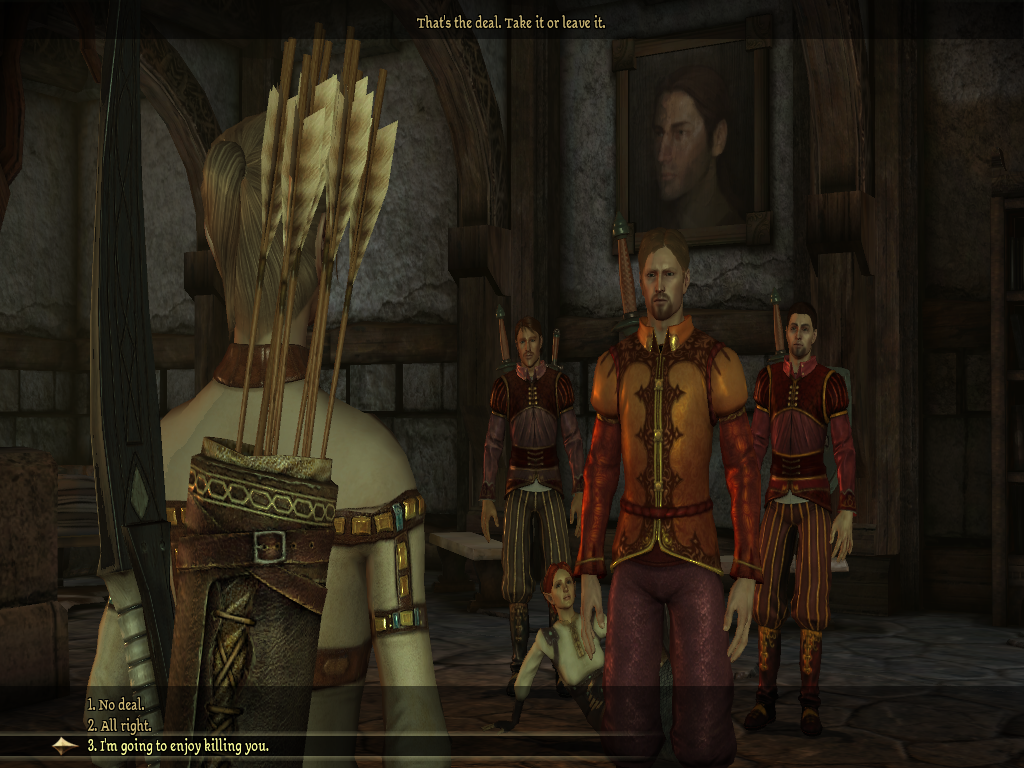 And then the dialogue option we all knew was coming.

To be fair, you do have a chance to actually accept the offer, and Von Dickface seems surprised by your decision if you do so. But we decide to murder our way to a resolution, instead, despite the fact that this will *clearly* create some problems for the Alienage down the road.

Following the time-honoured combat strategy of acquiring an advantage, I set Soris to chopping away at one of the cronies, while I arrow the other to death, before we go for Von Dickface. This proves to be a super-effective strategy. I think Soris had to apply, like, one health poultice in total. We then speak to Shianni, and promise her we’re getting out of here with the others. She says she can walk, and Soris asks a stupid question. 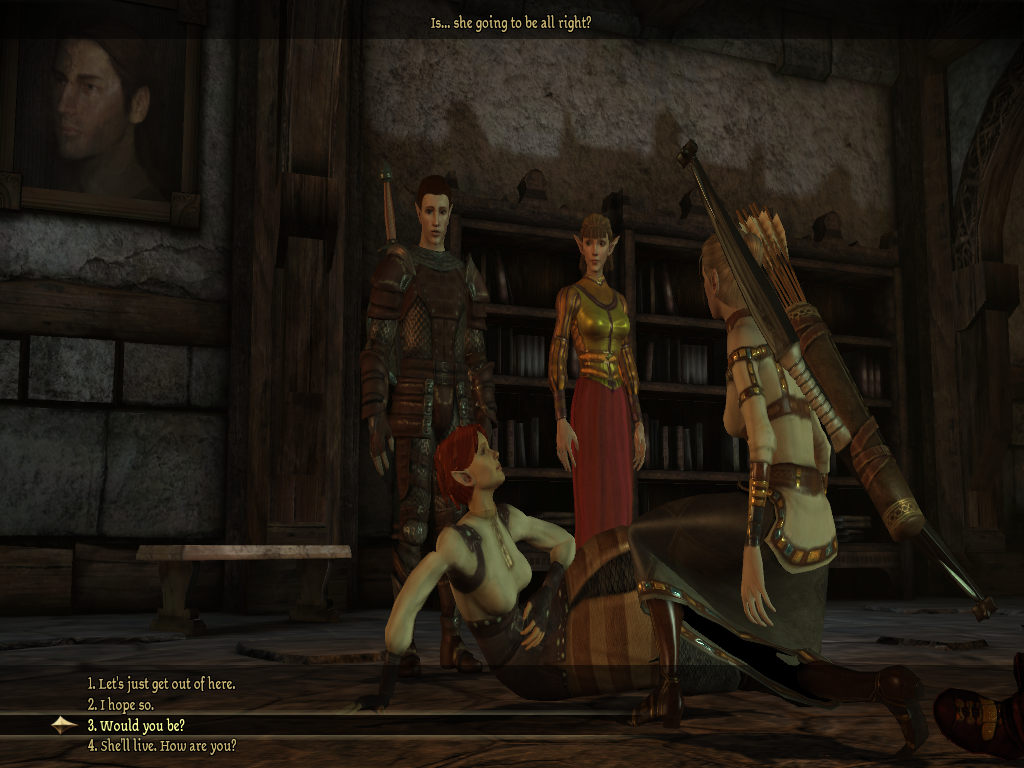 Such a stupid fucking question, Soris. Sorry your husband is an idiot, lady.

Shiani asks me if I killed them all. “Like dogs” I assure her. Which for Fereldens should probably mean a solemn and honourable death, but hey, let’s go with the commonly-accepted Western meaning instead, shall we?

She seems pleased by this turn of events. 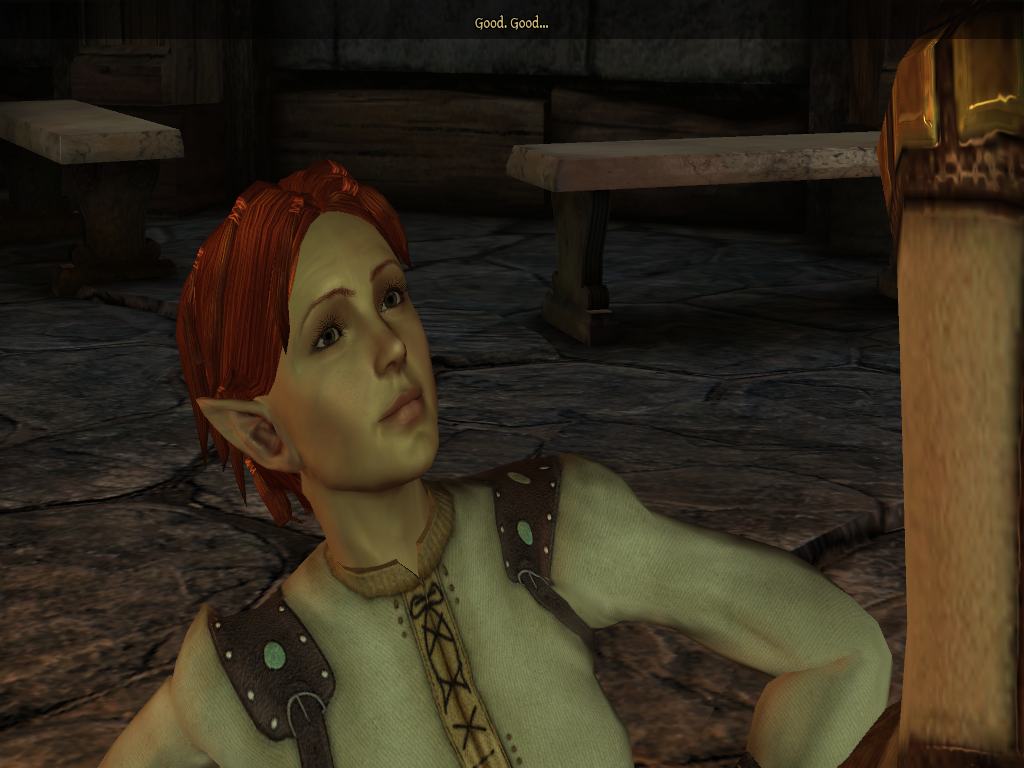 Soris offers to take the rear guard as we exfiltrate get the hell out of the palace.

Next Time: The Origin Ends! The Plot Advances!