I received access to a press build of The Old City: Leviathan, currently the defining game for one Postmod Softworks, back in November 2014. As I was ankle-deep in the developing madness of VNADS at the time, I figured I would shunt it to the nearest available review slot. Surely, I reasoned, I wouldn’t be doing this visual novel nonsense for much longer than November?

Well, long-story-that-you-may-have-been-there-for short: it did. November came and December went with more visual novels than I could shake several sticks at. And then January held some interesting immediate eye-catchers… isn’t she hard, the life of a hobbyist games writer? But all throughout the months, I never really forgot about The Old City. And now, at the start of yet another busy games release wave — seriously, I’m looking forward to the next few weeks so much — I figured I’d either give The Old City the time and attention it deserves, or I’d have to commit to ignoring it forever. And I’d like to think I’m at least too much a professional for that last one.

The Old City: Leviathan (‘The Old City’ from here on out, ignoring the promised sequels for a moment) opens up in a… house? Is that right? This menu screen looks a lot like a shabby, busted house. I see tables, I see candles, I see books, I see a giant hole in the wall that probably makes heating in winter difficult. I see graffiti on the walls. 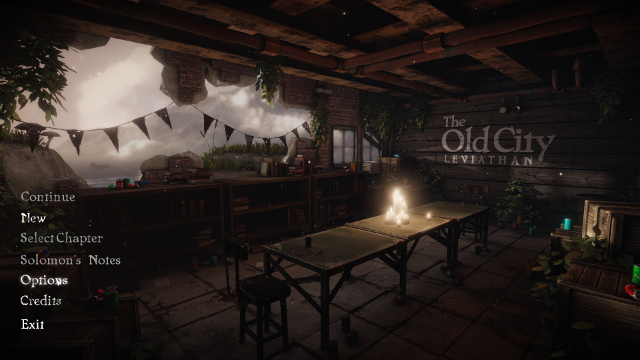 Who put that graffiti there? This is going to drive down property prices in the neighbourhood, you know.

I muck around with the options a little as calming piano music intertwines with the sounds of sea and seagulls. In an interesting twist on the formula, all of The Old City’s options have been put together in a single menu. Which certainly makes the hunt for the ever-elusive Subtitles option a lot easier, let me tell you. 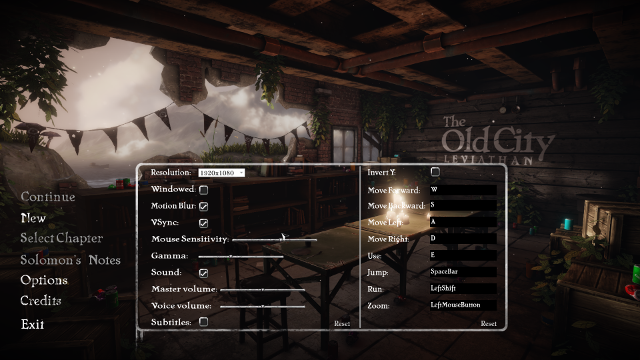 Beyond that, there’s not exactly a whole lot to do in this here menu. All the greyed-out options are unselectable. So it’s either mess around with the options, look at the one-block credits screen, quit entirely, or just start playing. And since I already roped myself into this whole ‘professionalism’ angle… 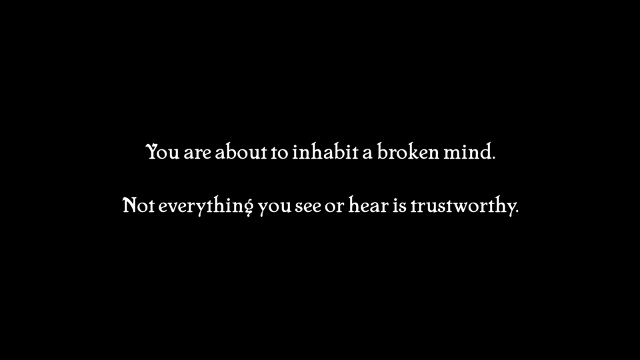 Huh. That’s… interesting, I suppose. I’m hoping this won’t mean I’m about to be treated to the standard set of video game ‘insanity’ effects, but time will tell. 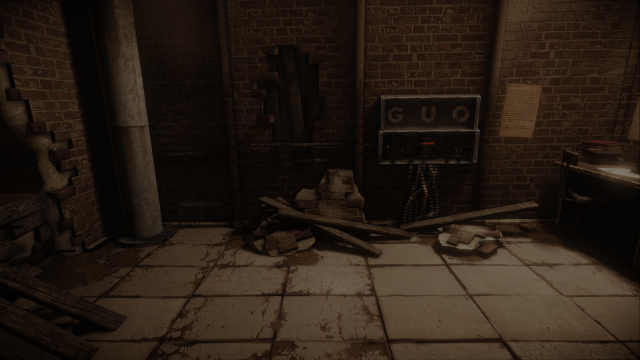 I got a little over-eager with this screenshot, so the room looks a little grey because it’s still fading in.

I find myself in a room, the most interesting characteristic of which appears to be that it’s a room. As I listen to sound effects that could be described as ‘sewer-y’, I take in the view. A pipe. A hole in the wall. Three letters over three switches, one of which is orange. A piece of paper on the wall. A desk. 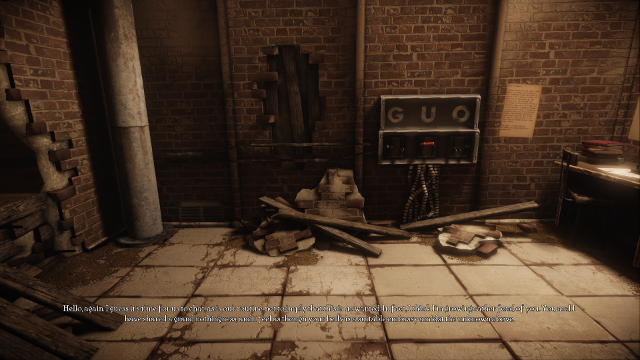 And almost simultaneously, these subtitles spring up. What a coincidence.

The voice is clear, and calm, and easy to understand, and yet I’m still pretty happy I turned the subtitles on. I can read faster than you can talk, guy, it’s nothing personal. Still, I happily stand around for a while, listening to Mister Unknown speak. To… who, exactly? And about what? I have no idea.

I turn around, taking in the rest of the room. No-one here. Is the guy who’s talking me? Could be. But if so, who am I talking to? Myself? The room? Myself-the-player, in something of an inverted Stanley Parable?

As the voice babbles on, I start walking around a bit. WASD moves, as expected. Space jumps. Shift sprints. E does… not much of anything, right now. It’s supposed to be the interaction key, but I hammer it a few times near the bright orange lever to no immediate effect. This one’s stuck, then?

There are pieces of paper up all across the walls. To some surprise, and in star contrast to the white bits of squiggly line on the desk, these papers are actually entirely legible. To very little additional surprise, they all seem to be nonsense. 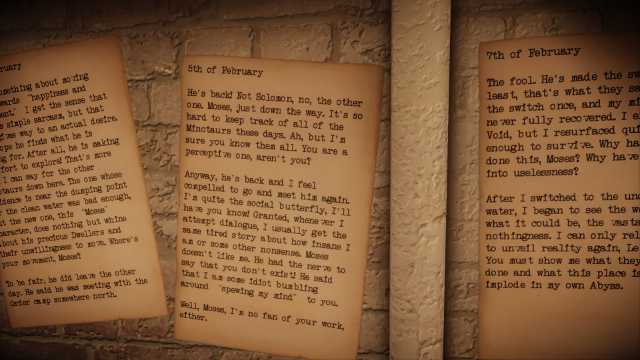 Have fun making sense of this!

From the writing style in the paper, compared to the style of the subtitles, I can only assume these papers were written by Assumed-Me. Which means he’s currently talking to… ‘Leviathan’? Makes sense, from the title. He makes references to ‘living in Leviathan’s belly like a parasite’, which either means he only just got out of there, or Leviathan is…

Heh. At the end of what’s chronologically the last page, Mystery Writer signs off as ‘Jonah’. I see, I see. Jonah in the belly of the whale, huh? Given that the other characters Jonah writes about have names like Solomon, Abraham and Mozes, the biblical interpretation seems the correct one here.

I’m still not sure what to make of words like ‘Dwellers’, or ‘Tarnish’, or the way Jonah references to himself and others as ‘Minotaurs’. Am I a minotaur? That would be pretty rad, no lie. But would minotaurs really babble on like this? They’ve always struck me more as a gore-first-ask-questions-later race, no pun intended.

I leave the little abode which is apparently my home. Or at least a home, if the signs are to be believed. 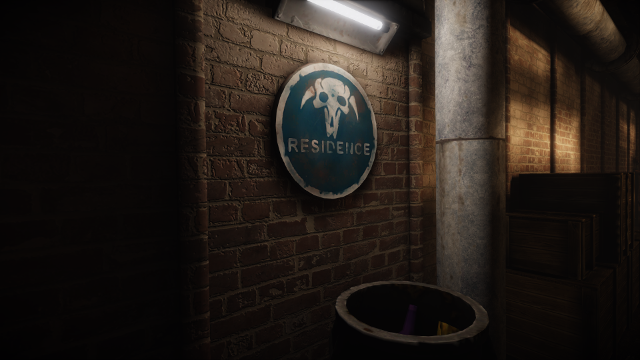 A Minotaur residence, even.

I walk through an empty hallway, taking in the sights. Some, like the low-res cans and bottles found in low-res trash cans, are only so-so. Others… 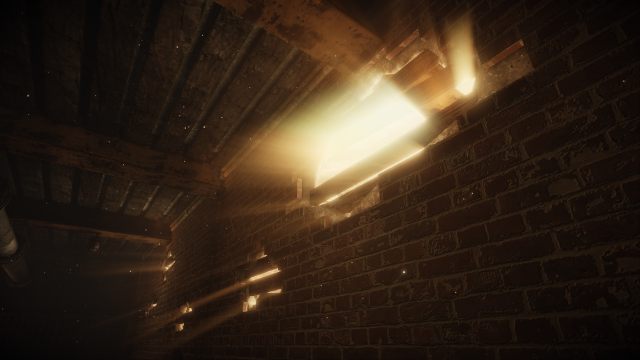 This game is pretty, sometimes. Often.

Hallway, walls, bricks. A gateway. “Danger: Unauthorized Personnel Keep Out”. Red barrels with white eyes on them. “Watch your step”, text in the distance warns me… 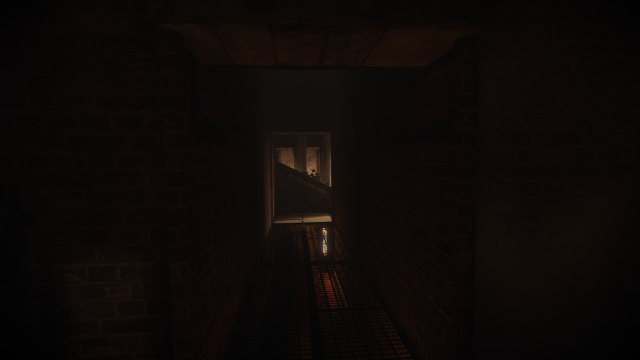 Watch my step for *what*?

…fading into plant cover as I get closer. 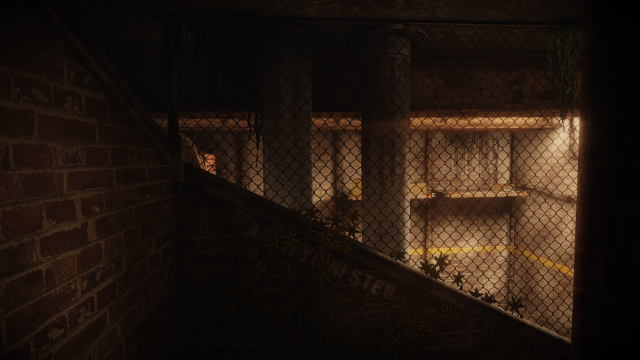 Oh, is this how you wanna play it?

‘Sequere Aqua’, another wall tells me, before quickly switching to ‘Follow The Water’. Like, in-sight. Graffiti, that’s not how you’re supposed to work.

As I explore the halls that are my home, Jonah occasionally chimes in again. From the way he talks, particularly when entering a long, dark subway tunnel, my earlier suspicions are confirmed: ‘Leviathan’ is, in fact, the building Jonah is currently in. Or buildings? Or city? 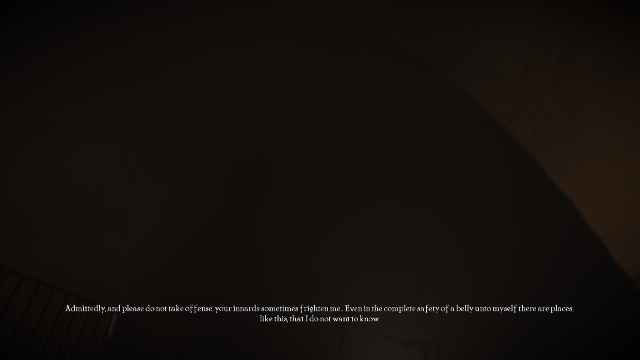 Probably more than just this pipe, which you’ll have to take on faith from me is actually a pipe.

Also note that I still haven’t actually done anything.

Oh hey, look, an eye with an arrow, pointing up towards a ladder. Might as well go that way, huh? Up the ladder, I find another residence, once again dotted with papers on the wall. These ones are older, though, more dilapidated, and clearly written in a different hand. 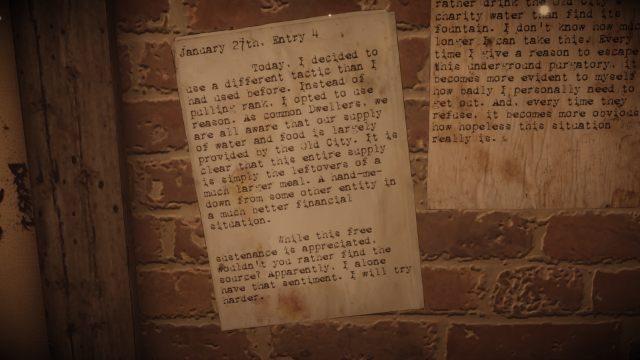 They also read as being a little more crotchety. 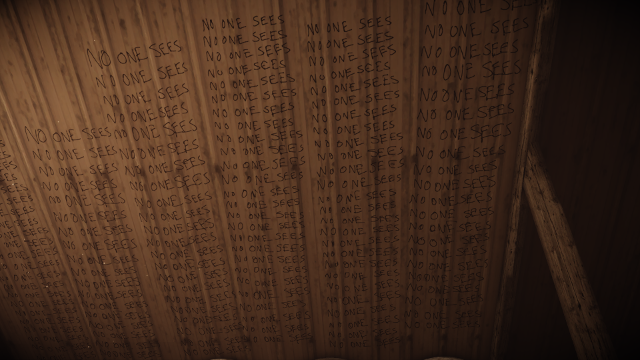 Even more interestingly, though, is a grey box glowing with green light. Upon activating it with E — finally, something to do for the Little Button That Could! — I unlock ‘Solomon’s Note’. Which is a thing I remember from the menu! 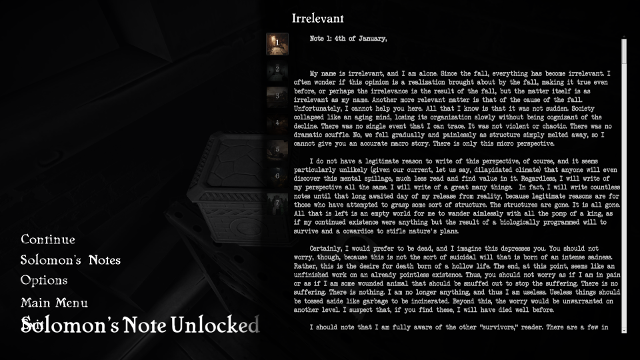 Wow. This is, er… this is a lot of text. Like a lot a lot. Like several thousand words, rough estimate. This here ‘note’ may actually be longer than this whole article up to this point.

And that would be okay, or at least not much of an issue, but it’s not really particularly interesting either. It starts out neat enough, promising to lift bits and pieces of the veil of lore that’s been over this game from the start, talking about The Fall and related concepts. But it pretty quickly devolves into the ramblings of a surly misanthrope. A self-important surly misanthrope, one who uses his misanthropy as a shield to make himself seem cool and collected. ‘No, it’s alright, I understand why you think I’m a jackass for hating mankind and insulting you. I wasn’t always as enlightened and wise as I am now. No, I don’t need your approval, I’m above that stuff now.’ 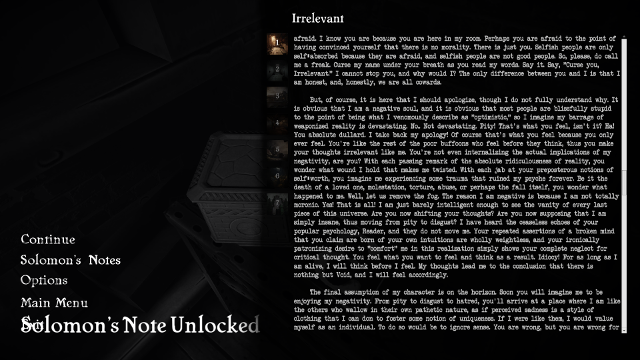 You think I’m exaggerating, but I’m really not.

I read the whole not, because of course I do. I don’t particularly feel happy about it, though. Will I read another one of these novel-sized notes, if I find them? Maybe. Probably. Maybe.

Beyond Solomon’s room — I’m assuming that’s what that place was — I find an elevator. Hitting the button causes Jonah to spout some nonsense about going up for air. The elevator opens, I get in, the door closes, and the screen fades to black. 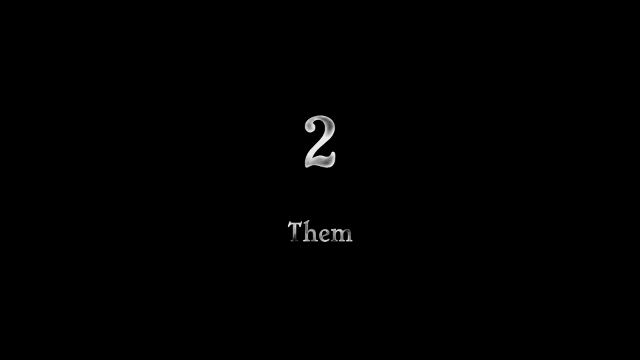 Next chapter, I guess.

Okay, so, well. I’ve been playing for… what, thirty minutes now? I’ve seen a lot of neat stuff, and I’ve heard some interesting babbles, and I’ve read a lot of self-important surling. And I still have no idea who I am, or what I’m doing, or where I’m going. Like, idea none, not the one. Maybe the other chapters will give me more insight, though? I mean, I’m only on chapter 2 of 11 here. The Old City can’t stay a strange, impenetrable wall of half-explained concepts and unguided exploration forever.