Last episode, I called my cousin Shianni a drunk. “Get-Drunk-Before-Noon-Day”, I believe was the exact text of the insult. 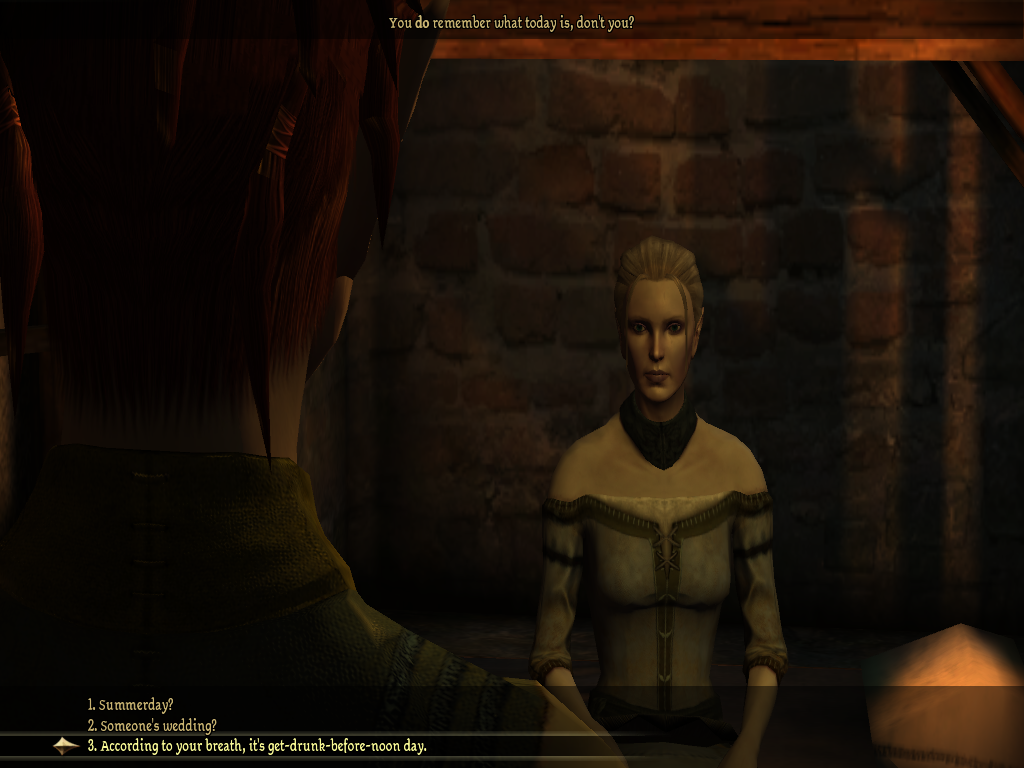 It was. Also, Fun Fact: Thanatos does not drink and, in fact, disapproves of alcohol in general, so this is actually the option I pick *every time*.

She actually brushes off the insult fairly easily, without getting offended. Samantha must have delivered it incorrectly. I would have used more withering disdain, and less having-no-actual-voice. I understand, though: the cost of voice actors for at least twelve different PCs and sets of dialogue would have been astronomically high.
Apparently, the poor sod I’m to marry, a guy named Nelaros, got to the Denerim Alienage earlier than anticipated, and it’s time to get everything thrown together. Fortunately, the family already has this taken care of, so all the blushing bride has to do is throw on her wedding dress: 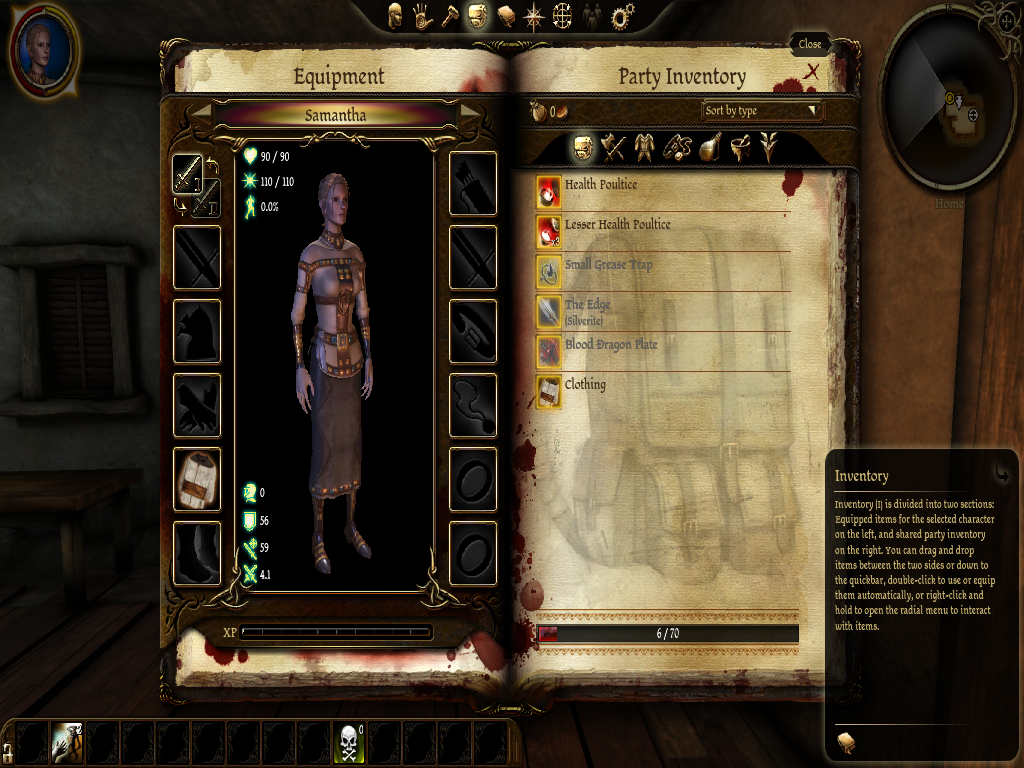 By looking at a book and dragging it over to a fully-realized simulacrum of herself. Somehow, you can even do this in the middle of combat. Man, I wish getting dressed in the morning was that quick.

And then talk to my father, before going to retrieve one of the other unlucky souls doomed to be in this whole ‘arranged marriage’ deal. Another cousin, this one going by ‘Soris’.

Daddy Dearest, as it turns out, is just around the corner, and he couldn’t be prouder. He also appears to have spent a *lot* of money on this whole shindig. Apparently, nobody seems to want Elves to get married. There’s talk of bribes, permits from the Chantry (the major church in Thedas), and even a dowry paid to the Highever alienage. Wait a tic, aren’t dowries usually paid to the father of the bride? Long, stupid history of men making women into commodities that are bought and paid for and all that? 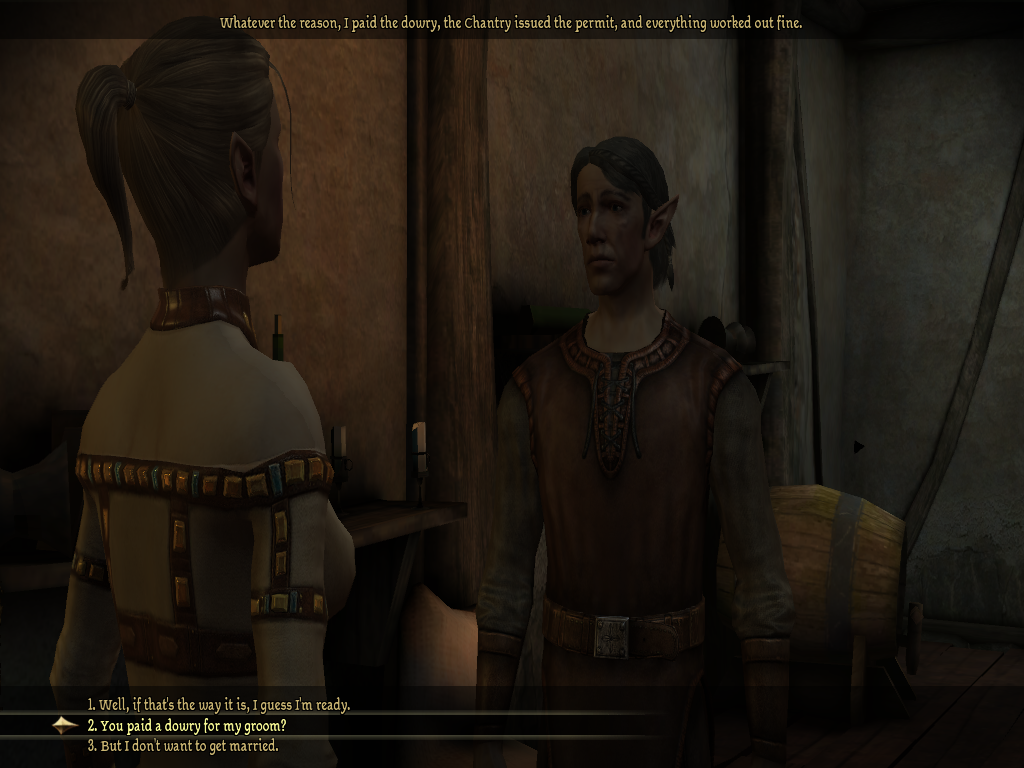 You, too, can express surprise at this reversal of traditional gender roles.

Apparently, amongst Elves, the dowry is paid not to the family, but to the Alienage which is losing a member. It actually makes a weird kind of sense. The money goes to help build up a community and will probably even get thrown at another alienage for another arranged marriage.

The two cousins we meet during this Origin are symptomatic of a slight problem with the rampant anti-Elf segregation. If you wall off an entire sentient species and prevent them from travelling (through little things like extreme poverty, for instance), you prevent the gene pool from receiving new material, which, in turn, prevents diversification and a strong gene pool. It makes inbreeding happen. Arranged marriages are the way that Urban Elves come at this particular problem. (I don’t know if it’s mentioned in this game, but it’s established somewhere that cross-breeding humans and Elves always results in a human child.)

Before we leave, Dear Old Dad gives us a piece of advice: keep the martial training our mother gave us to ourselves. “The swordplay, knives, and whatever else your mother trained you in.” Apparently, Mom was kind of a badass and wanted us to follow in her footsteps with regard to the whole badass Elven Rogue thing. Dad also tries to make the whole “Follow in her footsteps” thing a little bit more literal by giving us a pair of boots… because women love shoes, I guess? Is there a reason you can’t give us, y’know, something like a bow or a stash of silver?

(Jarenth interjects here to say: your dad already paid good money for your husband, yo. Don’t be greedy!)

Right. It’s not covered in the female version of this Origin, but there’s a pretty strict weapons ban in the Alienage. It’s illegal for Elves to carry weapons in here. Because giving one subset of the population access to things that make people dead and not allowing another subset the same always results in peaceful co-existence. And he did spend all the money on this wedding. 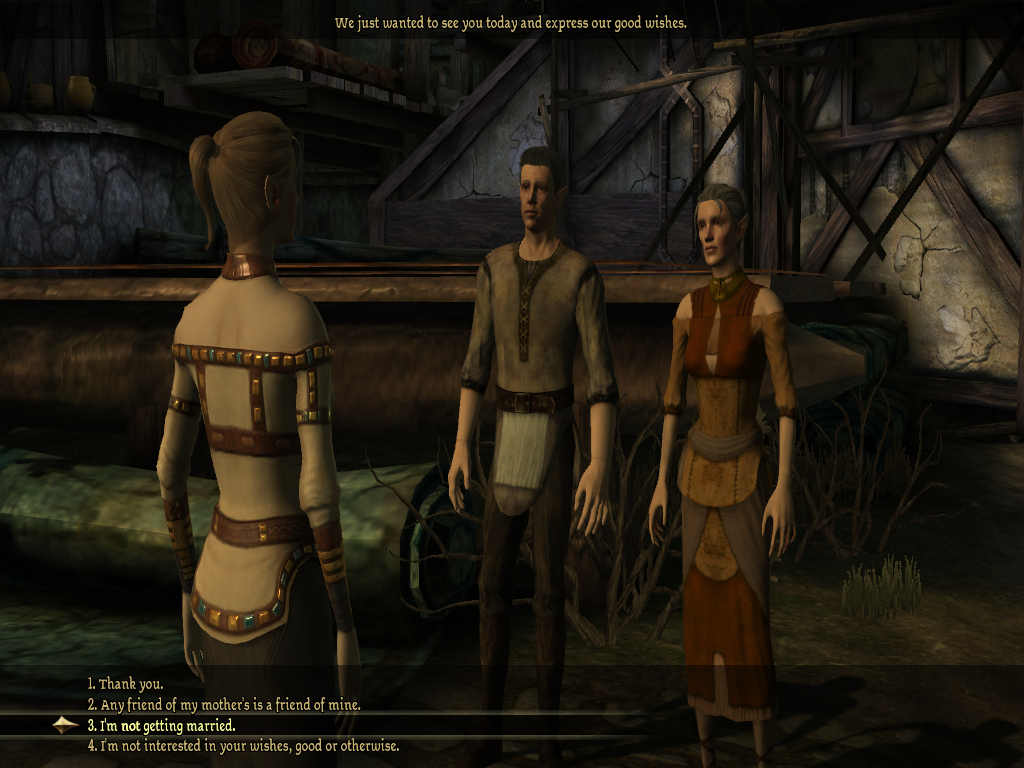 This wedding I’m telling everyone I don’t want to have. Also, I was reminded later that this dialogue option locks me out of fifteen silver, which is a not-insignificant amount of money at this stage.

We spend some time running around the alienage, encountering drunken revelers we’re able to con out of a whole forty copper pieces (not actually a decent haul), and promising to help a childhood friend by giving her money so we could stay home (and then stupidly choosing to lock ourself out of the only place we could get that money – see above screenshot). 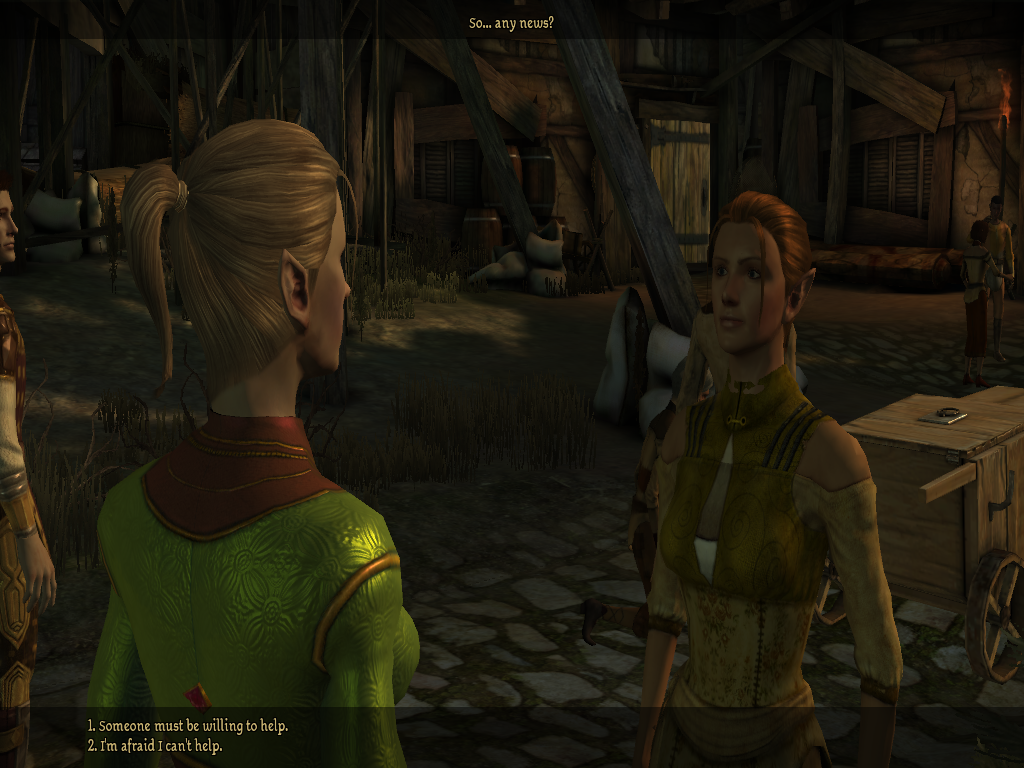 She won’t take the news well.

And I even re-skin the Robin Hood legend for a couple of Elven children running around playing (ugh) ‘Heroes and Humans’. Dialogue options clearly show that I’m making this story up off the top of my head, so a little bit of open source plagiarism is perfectly acceptable.

I’m just a little bit sad that there was no way to accurately show ‘withering disdain’ in the dialogue option for Drunk Cousin up there. And then, I have the good fortune to run into the only other guy in the Alienage with any actual combat training. 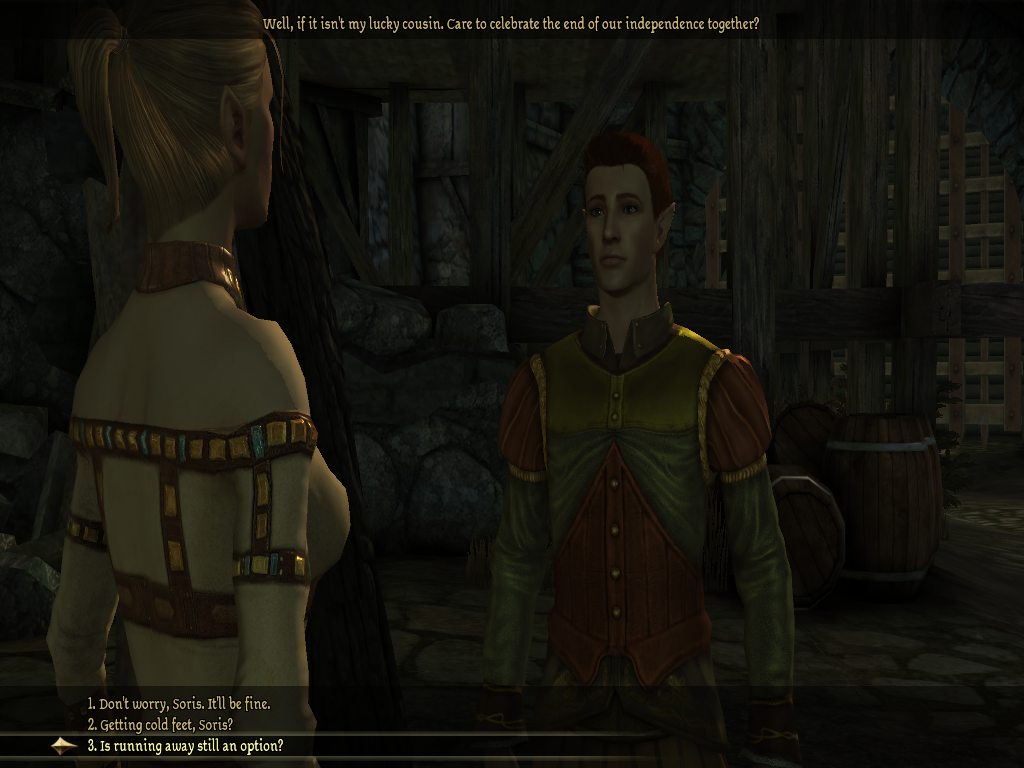 Man, the non-armor clothing in this game looks positively terrible.

Soris isn’t opposed to the whole ‘get the fuck out of here’ idea I’ve been bandying about all day, although his reasoning is less ‘Arranged marriages are bad’ and more ‘boo hoo, my bride is ugly’. Still, it’ll be good to have a Warrior by my side as we high-tail it out of the city.

See, I wasn’t really kidding with the whole ‘only other person with any actual combat training’. Although we’re not explicitly told how, Soris is actually a Warrior. Class and everything, stats, the works. Fade, the guy even knows how to Shield Bash properly. It’s a starting-level skill, but a useful one. My assumption is that Adia – that is, Protagonist-Samantha’s mother – trained him, too. One little illegal Ef murder-apprentice must have been too easy for her. We ‘joke’ about running off to join the Dalish for a bit and then trade outfits. 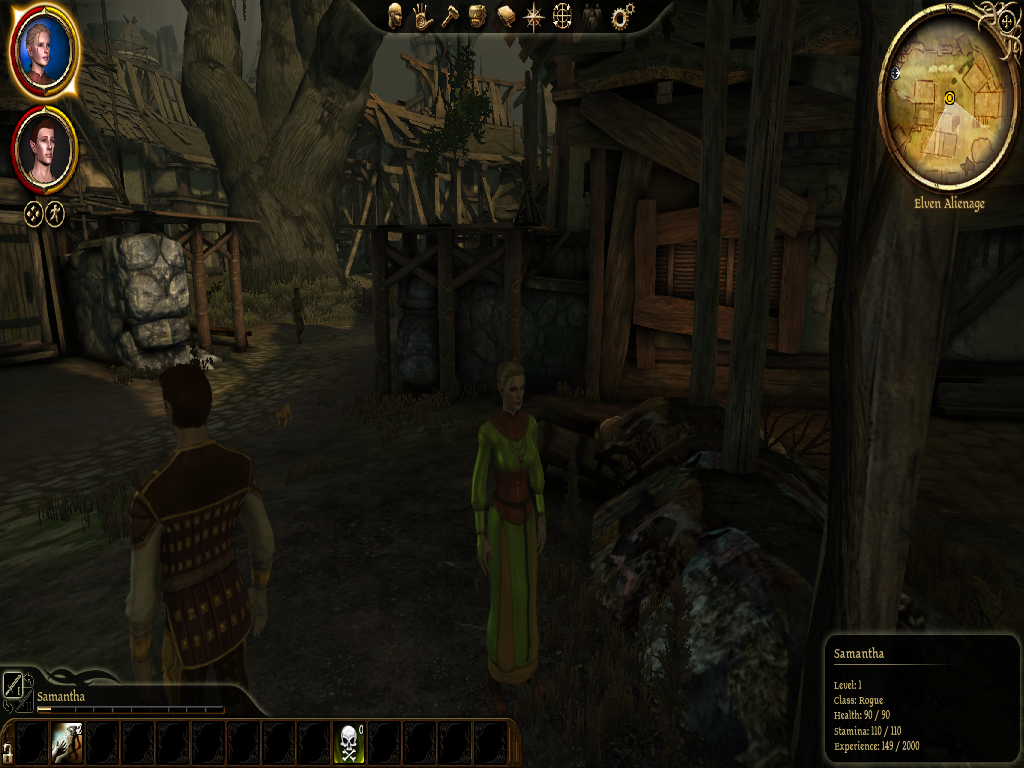 Magically, mine grows pants. His becomes a slightly-less-terrible green dress.

Why do we trade outfits? Because now we’re going to meet our fiancées for the first time and it’s bad luck to see your bride in her dress before the ceremony, duh.

I feel that I should note the game doesn’t make you do this. It’s something I do myself. Because reasons. Anyway, the two NPCs left in the Alienage I haven’t talked to include one supposedly-injured man begging. He claims his legs got crushed between a couple of ships while he was working down at the docks. There’s no way to check the veracity of his claim and I only have forty copper, which very soon won’t be enough to buy me any goddamn arrows, so I wish him luck and move on.

And then I run into somebody who is angry because, apparently, Nelaros The As Yet Unseen is a ‘good match’, and implies I don’t have any pride because of this. 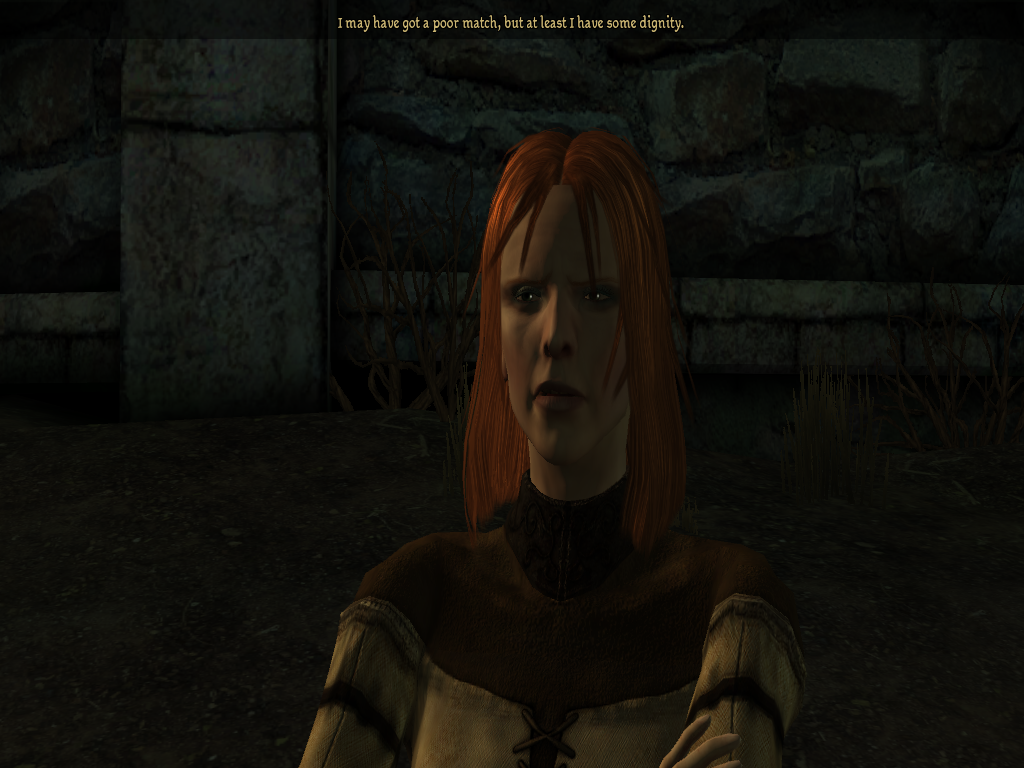 No, seriously, that’s literally her only issue with me. Only one of us can use a bow, lady.

And then Soris and I rush off to meet our affianced. 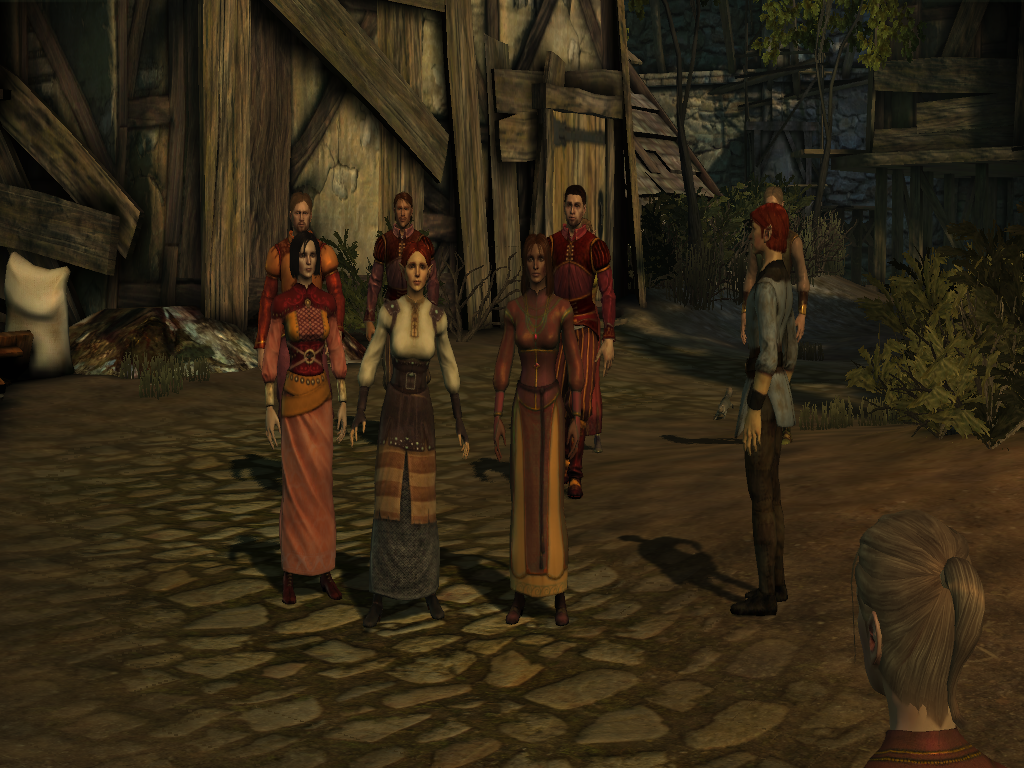 And suddenly the plot jerks forward from surprisingly-already-taken-care-of wedding, and our monkey wrench shows up. Today’s monkey wrench is in the form of not only white people humans, but *rich* humans. 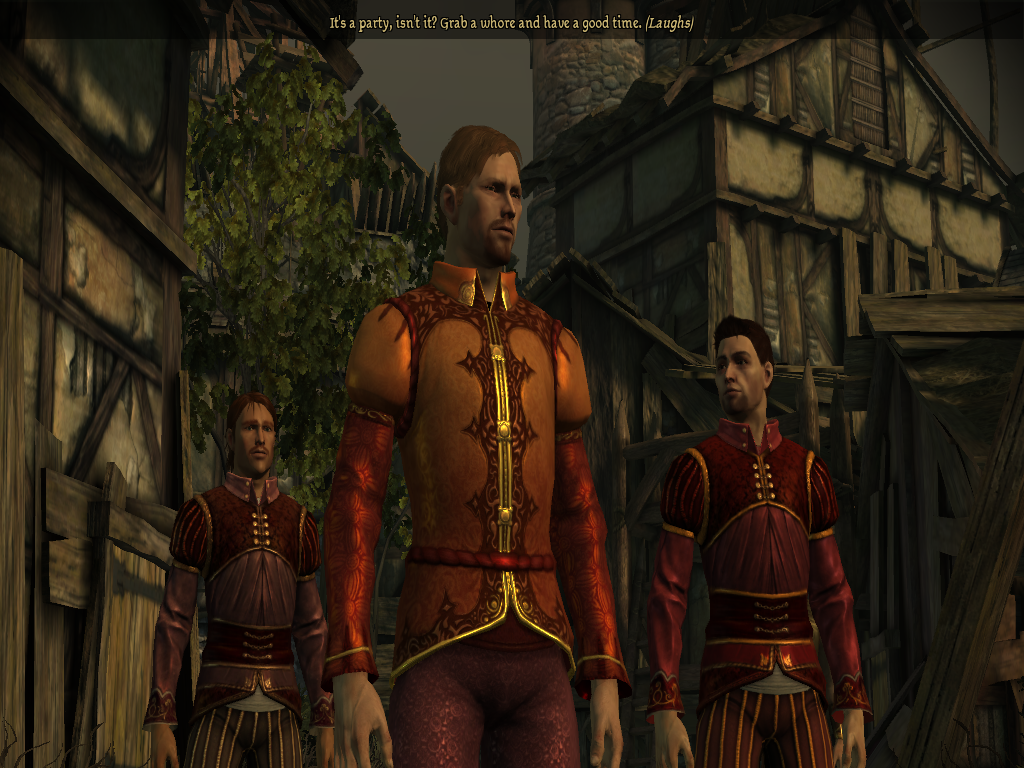