In the last episode of Jarenth Plays Beyond Earth, I discovered incontrovertible proof of alien life and the possibility of time travel. I then proceeded to blithely ignore all of that… where by ‘I’, I mean ‘Beyond Earth’. Man, I’d have loved for this whole political squabble over land and ideologies to just like that fall by the wayside as a result of this! Who were these past aliens? Why did they bring one human being back in time? How does their time travel work? Can we replicate it? Should we replicate it? What do these discoveries mean for literally every truth we human beings hold self-evident? Who cares about that? Let’s go back to fighting wars over shiny minerals and floating rocks, am I right? 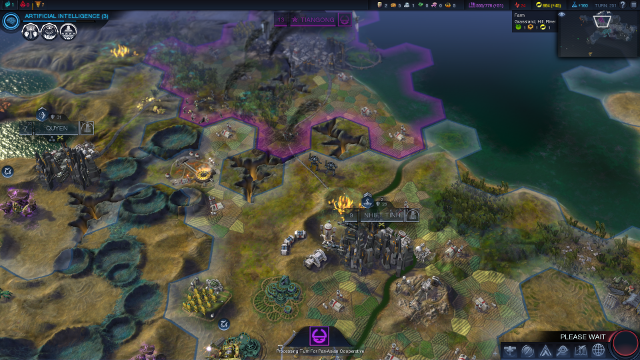 In the game’s defense, both the minerals and the rocks are pretty rad.

Fighting and espionage continue unabated in this post-time-travel future, and yes I will keep bringing that up if I feel like it, with PAC Tacjets slamming themselves against my wall of air superiority and agent Jacira arriving in Freeland. Christ, what a rat hole. They haven’t even discovered non-awful housing, yet. No wonder Hutama was so eager to surrender to my robot armies. His Purity Affinity rating must be like, what? Three?

In the AI’s defense, I can see they’re all trying to keep up with my single-minded rise through the Supremacy ranks. Particular kudos to Kavitha Takur, who — at Supremacy 4 — seems to have hit the critical mass for visual Affinity-related change. Third out of three Supremacy players to do so, but hey!

“Wait”, you ask, “how can you tell? I thought you didn’t have any of Kavitha’s cities in visual range yet.” And you’re right, perceptive reader of mine, I haven’t. But I do have something figured out. Remember how, last episode, I commented on both Daoming and Vadim switching outfits? I didn’t pick up on it back then, but Kavitha’s new outfit change rather dramatically drives home the point that these changes are as Affinity-related as the city changes are. Because… well, remember that bright purple dress she was wearing earlier? 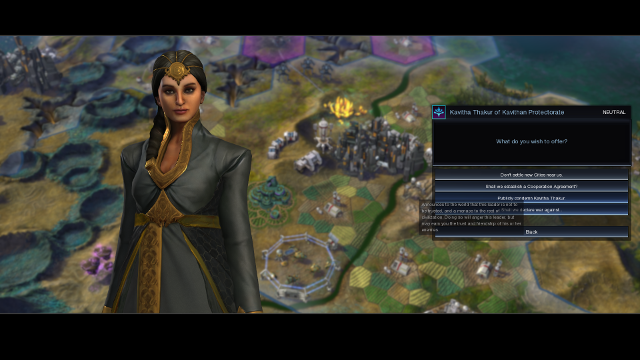 Daoming and Kavitha both wear the black and yellow of Supremacy, as do I. I think. Vadim’s new military outfit, on the other hand, pretty clearly sports the red and brown of Purity.

And look at Samatar’s new digs! Is that Harmony blue-green or what?

Speaking of Kavitha: Yes, we’re still trading. That’s why I called her. No, she still doesn’t want to be friends with me. No, I’m not at all bitter about this. Moving on.

Okay, okay, not moving on. The reason I’m trying to get good with Kavitha is actually because of these Affinities. Samatar and Suzanne and I are still buds, and I actually consider it strongly to Beyond Earth’s credit that these friendships haven’t fallen apart over trivial bullshit the way they so often do in Civilization 5. But while I really hope our three-way alliance is forever, I can tell that this Affinity stuff will probably start driving wedges between us. I mean, it’s already kinda starting. 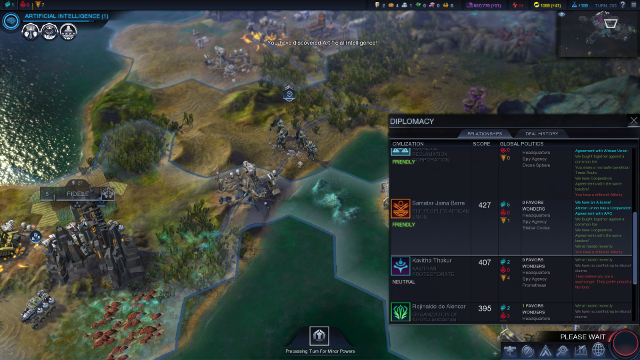 See? I can hear the *muttering*.

And Kavitha is sending me signals like this a lot: 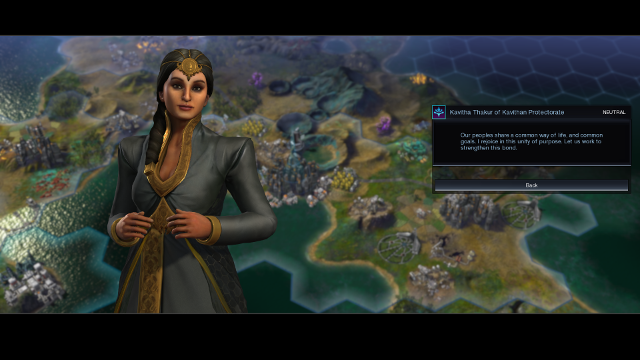 “I like you a lot! Just not enough to, you know, actually act on it in any meaningful way.”

Still, so far, so good. My pals are still squarely on my side, which means I can safely proceed my research into Hypercomputing without worrying about unexpected warfare. 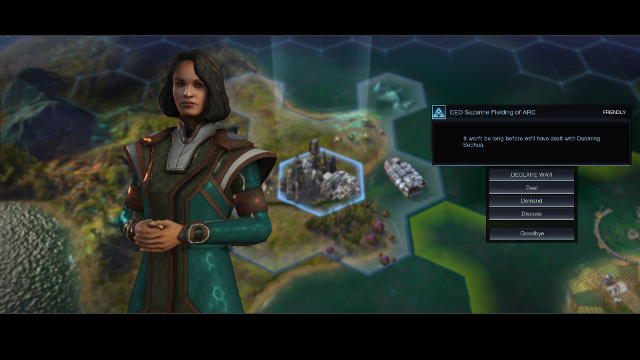 And I do honestly really like their new matching outfits! I’m just… sad I can’t be part of their club.

With the slow-burning PAC war more or less a background issue, life by and large goes on. I check in on Maeva, the city I received from Hutama, and see that the Polystralian leader is not so vindictive that he’ll pass up a good trading opportunity. 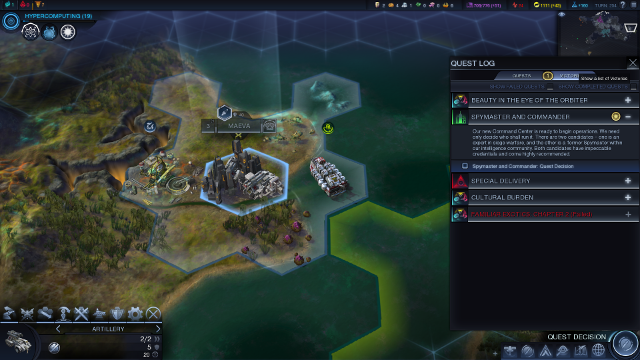 Either that or he’s smuggling soldiers into the city for his inevitable attempt to take it back.

I receive the Quest for the Command Center, another building I didn’t actually build myself. Who will lead my military operations? The options are either ‘a dude who will give each Command Center +15 Strength, thereby making the building straight-up better’ or ‘a dude who will provide me with extra spies’. And given the catastrophe I almost averted… 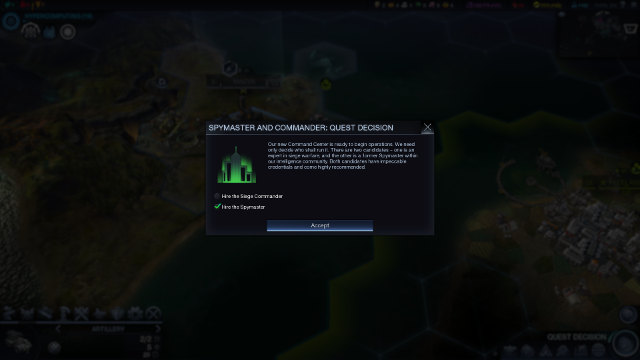 Welcome aboard, agent Adele! I’m sure you’ll fit right in.

In fact, let’s get another agent through Virtue development! Welcome also, Information Warfare Specialist Kamina. Both of you work on our atrocious Health for now, and I’ll see if I can’t get you any cushy overseas assignments later.

Way down in Gran Éxito…

…Wait, hold on. Didn’t I use to have a Worker here? Whatever happened to that guy? I’m pretty sure I bought a Worker here specifically to fix up this town, because Steve only knows it needs all the help it can get. Where the hell did it go? Did it… get eaten by aliens? That would be par for the course, but I think I’d remember that.

And for that matter, where are the aliens?

Way down in Gran Éxito, I add a Worker to the construction queue! Predictions indicate it’ll take 23 turns to complete, a time frame I could easily build some of the cheaper Wonders in. Crikey. And I still can’t remember where that Worker went.

(Future Jarenth’s Note: Yeah, I only remembered way after the fact. I sent that Worker up to Maeva. There was a section in the previous episode where I went ‘wait, where did this Worker come from’, that didn’t make the final LP cut. It took me this long to put those two together, too.)

I’m surprised the ‘war’ against Daoming has been this… tame. I’m assuming that she, for whatever reason, has reasoned that she can’t hope to beat me on the offensive. Does she even have an army left? And as I mentioned, I’m not really all that into wiping anyone off the map, so I’ve just been sitting outside of Tiangong, bullying her and smacking her airplanes down. But what I don’t understand is… why isn’t Suzanne acting? Even Samatar has been more actively involved in this conflict than she is, and she’s the one who started it.

Well, whatever. I’m content sitting out the minimum ten-turn duration for conflicts, so I can offer Daoming a peace deal and be done with the whole thing. I’m bad at keeping track of time, though, so I’m not entirely surprised when she calls me to arrange it.

What I am very much surprised about is how Daoming is apparently so desperate for peace, she’s willing to offer me another city. 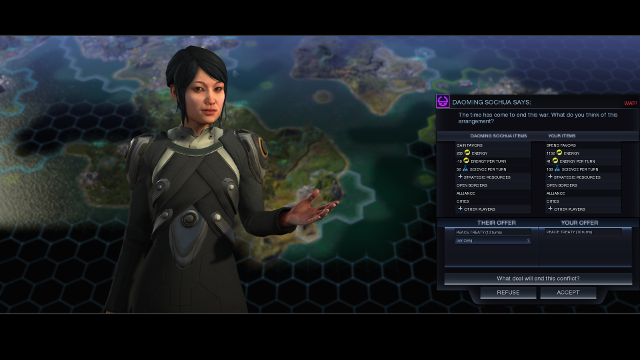 One that I haven’t even ever heard of!

Daoming, what should I say? I… I appreciate your offer, I really do. But I don’t really want your city. All it’ll do is mess up my abysmal Health even more, and build a bunch of buildings I don’t want. I would like peace in our time, though… maybe I should alter the deal to be better for you?

But no, doing that would forego a central aspect of my character: the fact that I’m a ruthless, power-hungry jerk. No, clearly, the correct solution here is to accept your peace deal as given, and then set your city on fire while you watch. 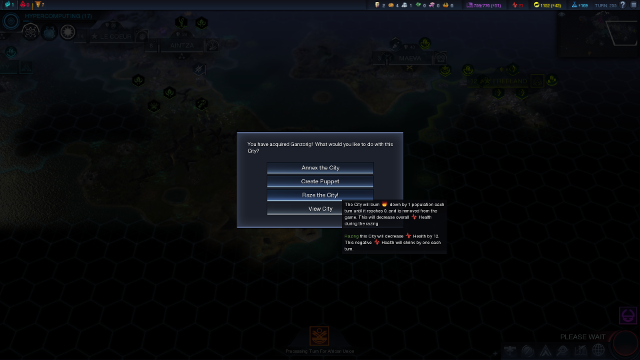 You think I’m joking, but I’m really not.

Where is this dumb city anyway?

…Oh. It’s actually pretty close to Vadim’s territory. That… seems like it would’ve made a decent forward base if — when — I ever attack him. Man, I sure wish there was a way to extinguish burning cities right about now. 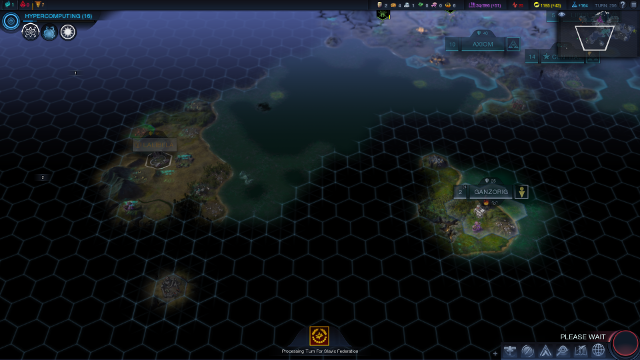 Too bad there aren’t any accessible sources of water around or anything.

Doop de doop… building Workers, and Science buildings… Kavitha builds a Wonder I want, damn you, but her score is still abysmal compared to mine so who cares… 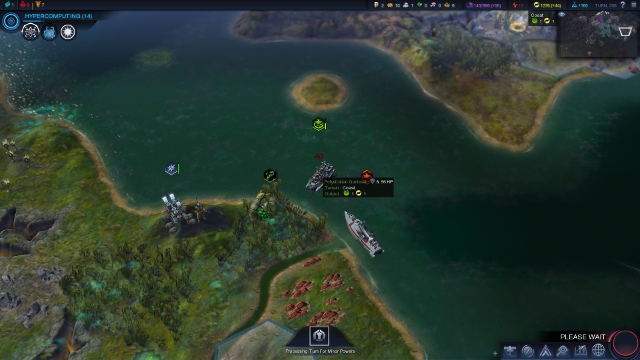 “We’re protecting your Explorer, Elmo!” “Because someone has to, yobbo!”

…admiring Rejinaldo’s new outfit, even as he talks smack about my cool robot civilization… 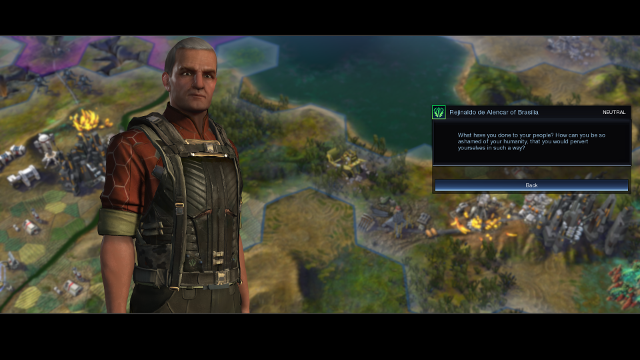 Reggie, your suit’s as cool as your speech is nonsense.

…yeah, things are just… moving along at a steady pace right now! In fact, I can’t think of a single thing that could suddenly and irrevocably alter this balance of power we’ve got going on here.

I’m pretty calm because of the whole thing, too. I’d almost say mellow. Something about the going-on of this game in times lacking immediate crisis just lulls me into this almost zen-like state of relaxation. So even if something were to upset the balance of power right now, it would have to be… I dunno, something really vile, in order to rouse my attention. Some sort of, say, challenge to my authority, a slap in the face of everything we’ve established so far that simultaneously undermines my power and conveys the message that the perpetrator couldn’t be less concerned about my reaction. 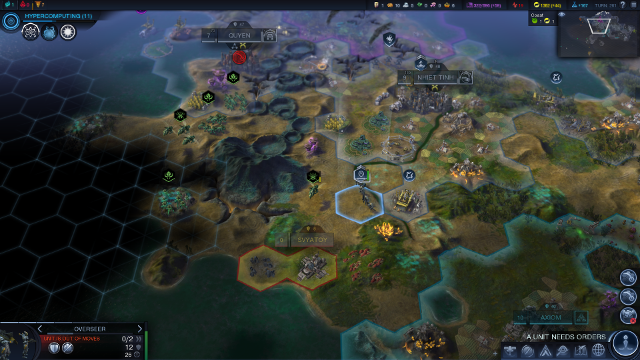 Next episode: Come on, what do you think happens?