In the last episode of Jarenth Plays Beyond Earth, what started out as a nerve-wracking twist worthy of a second-rate Tom Clancy novel turned into a pretty solid victory for Team Franco-Iberia. No, really! Math’s on my side here: I went from one city less than I started with, to an equal number and makeup of cities, to one city more, all in the span of about seven turns. And I got to mock Hutuma’s poor situational awareness and overly optimistic planning, too. I don’t know how things are where you’re from, but over here in Franco-Iberia, that’s cause enough to break out the celebratory whisky.

Alright! Time to do stuff that isn’t war. And not a moment too soon, either. I develop a new Virtue, resolving to more or less just go all the way with the Knowledge tree before I branch out again: I got all the Knowledge Virtues that I really like already, at this point, but if I fill the tree out completely there’s a free Technology in it for me. So, sure, I’ll institute Metaresearch Methods, which lower leaf node research costs by ten percent. 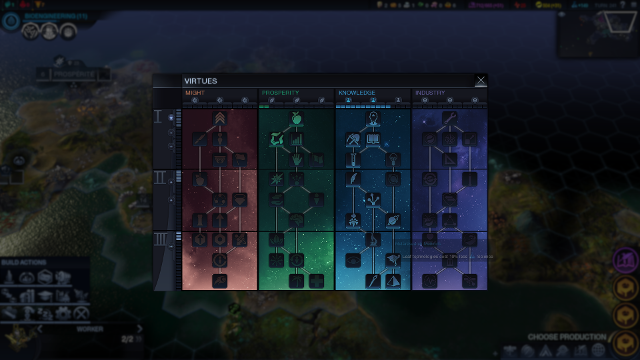 …Why was this one of the ones I *didn’t* really like?

And no less than three of my cities finished their works this turn, huh? Let’s get back to building things that aren’t engines of war… Let’s see, I’ll build a Clinic in Fidèle, a Pharmalab in Gran Exito, and for Prospérité… ooh, this new Firaxite-dependent Holosuite looks pretty okay. 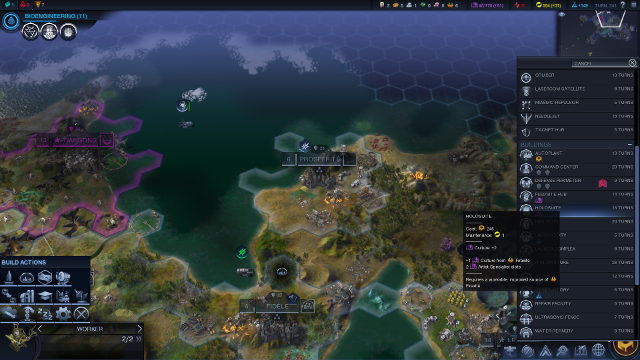 I move my Workers to their new assignments, pull back the expeditionary force that was sailing towards Polystralian lands, and instruct the newest and foolest-hardy member of the Explorer Corps to go check out that weird tomb over near Prospérité. Aah, life is good when the cannons are at rest.

Contented, I end my turn. Other units move around, deals are made, video calls are placed, and over at Nhiet Tinh, a squad of PAC Artillery vehicles drives down into my territory. This causes Nhiet Tinh’s proximity alarms to go off something fierce.

Oh yeah, wait. Crap. I’m still at war with PAC! I was so busy hating on Hutama, I totally forget I told Suzanne I’d help her with that. 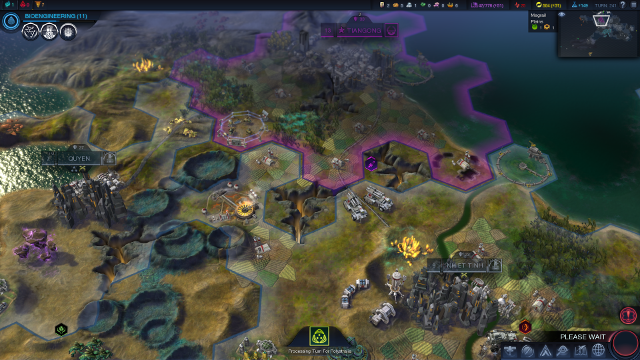 I mean, it’s not like this is a big deal. Daoming’s Artillery can’t take over the city by itself anyway. And I have some units hanging out on this side of the world: I was gonna make them map out the coastlines, but I guess defending the homeland works too. Here, let me just move in this water-borne CNDR, pull it right past Daoming’s capital of Tiangong and its many, many Cruisers… 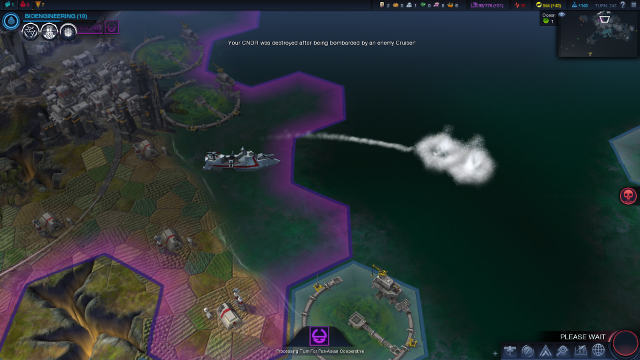 Maybe I’ll remember why this is so dumb, next time.

Oh, what’s up, Rejinaldo? You want how much of my Firaxite in exchange for one Favor? 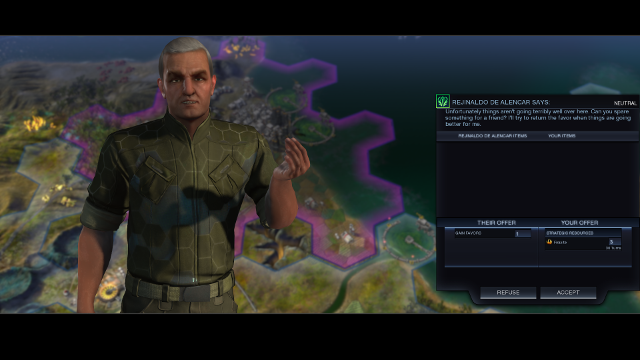 Eh, you know what? That’s alright, you can have it. I’m not using the stuff extensively at the moment anyway. And I don’t see you putting Firaxite to use to get ahead, or to be a threat to me. Daoming, sure. Khavita, maybe. But you? Without the requisite roboteering knowledge, all Firaxite’s really good for is rad rave parties and some highly efficient night lights. So yeah, you got yourself a deal.

Oh, what’s up, Khavita? You want to trade some of your Firaxite to me? For Titanium, the stuff I have more than enough of and I don’t even really remember what I’d want to use it for? 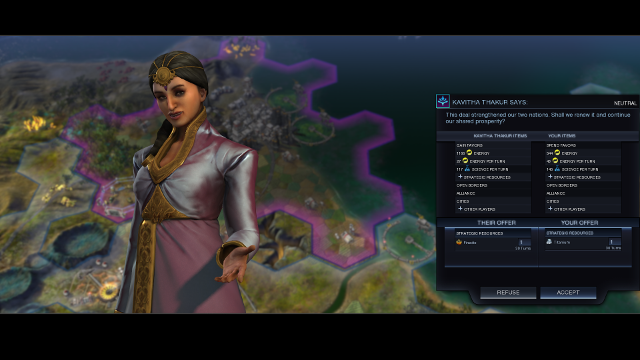 And so, the circle of life and trade continues to revolve.

I mean, both of you are basically marshmallows. 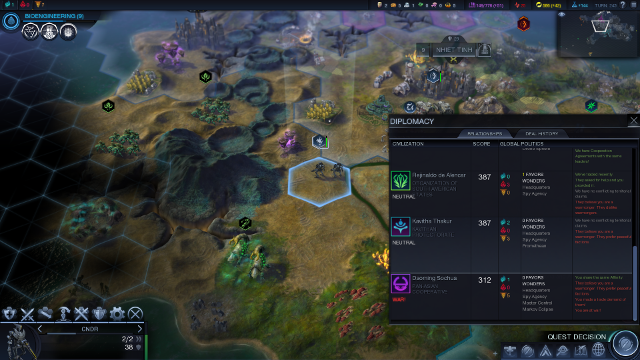 You’re the marshiest of mallows that *didn’t* get curbstomped by me and my friends.

For all the fuss I’ve made about Daoming’s ‘incursion’, nothing much of consequence really happened there. I lost one CNDR because of stupidity, that’s it. Daoming has already retreated her Artillery, wisely realizing that that line of attack wasn’t going to go anywhere. Which means I could get back to that peace I so very much desired…

…but on the other hand, I’m directing my forces that way now anyway. Might as well see if I can’t take anything more of Daoming’s while I’m at it. Opportunistic warfare, ho! 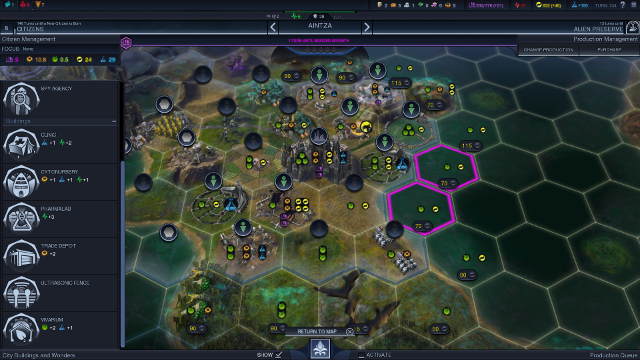 There’s no real reason to put this screenshot right here. I just love how colourful Beyond Earth gets sometimes.

I move all forces local to the Nhiet Tinh area to Daoming’s border. I also rebase my two Needlejets into that city, both because I can see that Daoming has airplanes of her own, and because boats are hilarious targets of opportunity when they think they can strut up and down my coastline without getting hit. 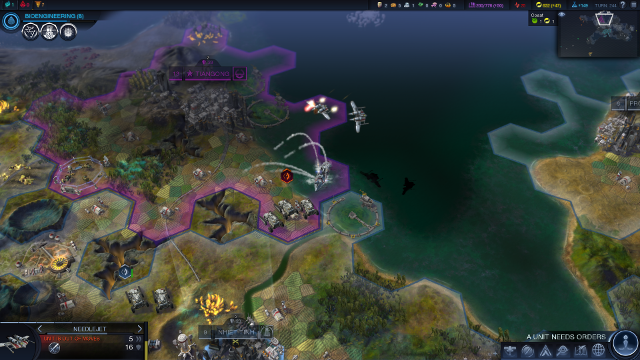 Embarked units, boats and airplanes are like rock-paper-scissors. Except in my case the scissors are made of diamond and Kevlar.

Interestingly, Suzanne and I aren’t the only people with units in the area. Samatar, of all people, has sent one Armor squad too. Were these the reinforcements he was sending me, during the earlier war? Or does he just like Suzanne better than he likes me? They are both following the Harmony Affinity, the two of them against the world, so I can see how that can lead to some good bonding moments.

“Hey, what’s your stance on aliens?”
“I think aliens are great and lovely and amazing, and I’d like nothing more than for my whole civilization and all my units to be and look just like them!”
“WOW, THAT’S AMAZING, I FEEL EXACTLY THE SAME WAY!”
“Wow! Let’s trade alien-human hybridization tips!”

Samatar’s involvement in the conflict doesn’t actually last very long, as he settles peace with PAC inside of two turns. But it’s the thought that counts, I suppose.

My Explorer — I feel safe referring to every Explorer I have as ‘my Explorer’, because chances at this point are good I’ll always only have one left — has finished digging up the mysterious ruins that appeared outside Prospérité. The quest updates, then updates again… apparently, the ruins held a human skeleton, and weird, phasing writing. Step two of the quest would be to build a Laboratory somewhere, anywhere, but obviously I’ve already done that. And…

…the human remains found inside the ancient alien tomb belong to… a current citizen of my colony? Hang on, hold up. That doesn’t make any sense. 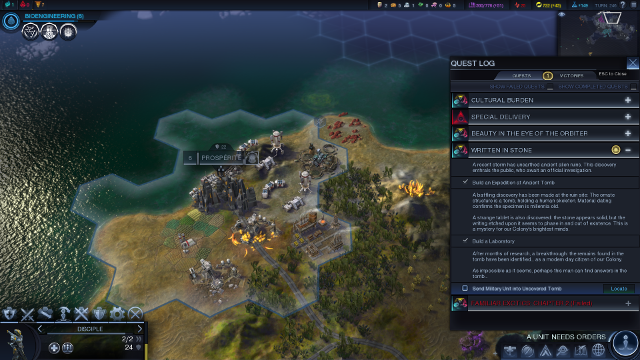 And yet, here we are.

“Hey, Billy. Remember that weird skeleton we found in that alien tomb?”
“I sure do, Steve. What of it?”
“Well, turns out that skeleton is you. So now we’d like you to into that tomb and touch your own skeleton.”
“…why?”
“It’ll be cool.”

Back in non-incredibly-weird-land, I move some of my units into Daoming’s borders. Just to see what she’s up to, you understand. Let’s see, what does she have? I see… two Cruisers, one of which is incredibly damaged. As if through some kind of aerial bombardment. That one Artillery unit, now stationed safely inside Tiangong. A Trade unit. And… ho ho ho, what is this? A Colonist? Daoming, were you planning of expanding to some place where your immediate neighbours aren’t incredible warmongering dicks? 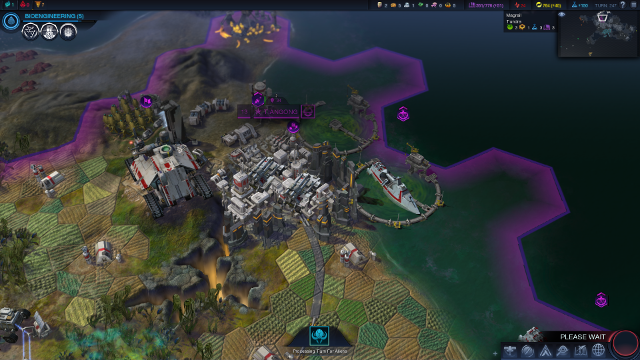 “I was going to hang out with Samatar.”

Daoming, that’s honestly quite a clever plan, but you understand I’m not actually gonna let you do that, right? My tanks are right here, and the Colonist is a non-combat unit. So if I move them up in an intercept course, it stands to reason that I would get…

…a Worker? Er… okay, that’s fine too. Not what I was expecting, but sure, I’ll take it. 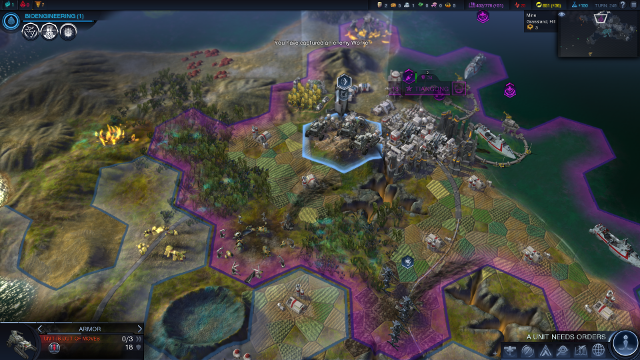 Of course, the hex right next to Tiangong isn’t exactly a home base with long-term survival prospects for my Armor. Both Tiangong’s city defense batteries and the garrisoned Artillery have a clear shot. Oddly, though, they both elect to attack my CNDR unit instead: the city, the Artillery, and both Cruisers take shots at it. And, let me tell you: it turns out that CNDRs can take a punch. 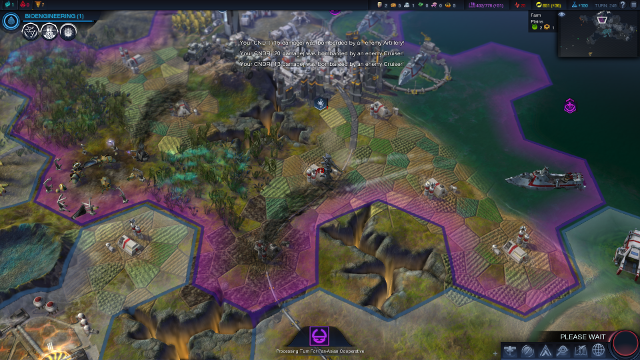 IF (TotalDamageTaken<100) {deliverTaunt("Is that all you got?");} [/caption] The CNDR graciously takes an entire battalion's worth of high-caliber shells, while the Armor and the new Worker escape in the confusion. And that's enough warfare for today, folks! I'll let Daoming sit on her own poor decision making for a bit. I have spies to run, for instance! Agent Tabora has made it to Khrabrost, City of Mild Intrigue. I can have her Steal Energy, Steal Science, of Steal Technology, the latter obviously seeming like the best choice in this situation. As for my other two Agents, both of whom are currently unassigned... ...both of them are unassigned? How does that… Oh, wait, I see. Obviously my counter-intelligence operative in Le Coeur would have gotten booted out when that city fell to the coup d’état. Which also implies a little that maybe Agent Nanine here isn’t particularly great at counter-espionage? Still, I’m gonna be magnanimous and give her a second shot at the job. And finally, Agent Jacira is assigned to… let’s say Freeland, capital of Polystralia. Couldn’t hurt to keep a bit of a better eye on those guys, huh? 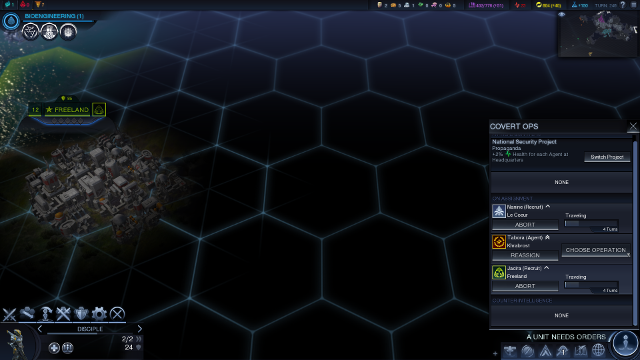 Fool me once, Hutama, shame on me… 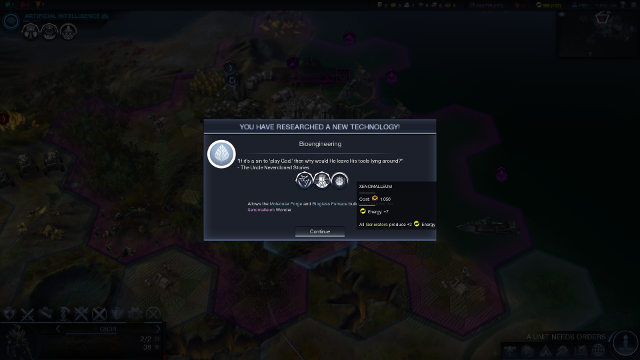 I particularly like the sound of this Wonder. And I’ll need to stay on the Wonder game, because Vadim Kozlov just completed *another* one.

Xenomalleum, I will build you.

I pull my units back across the PAC border, mostly. Now that I understand Daoming’s targeting priorities, I can exploit them a little to hilarious effect. I leave my heavily-damaged CNDR on the edge of the border, outside of Cruiser and Artillery range, but inside the operational range of Daoming’s Tacjets. Then I set both of my Needlejets to run air interception. And… well, let’s just say the results are predictable and hilarious in equal parts. 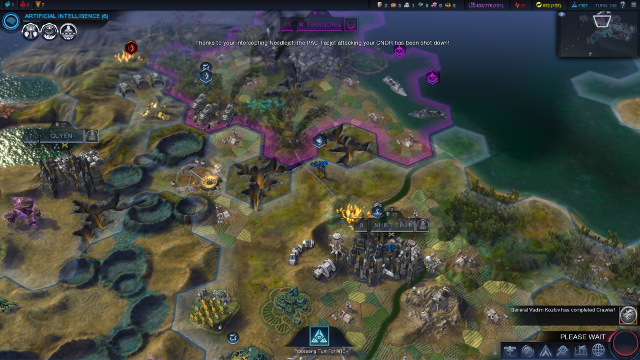 “That robot is near death! Send another airplane!” “Ma’am, our last five airplanes were destroyed on that exact spot. Maybe we sho-” “SEND ANOTHER AIRPLANE!”

Alright. Let’s round out today by returning to that strange Ancient Tomb quest. In accordance with instructions, I’ve sent a military unit — a half-dead squad of Disciples — over to the tomb location. I’m assuming the intent here is that these guys are escorting Billy to see his own skeleton? Which, if we’re being completely honest, is incredibly morbid no matter how you slice it.

I move the unit in position over the tomb. I click the new ‘Enter Tomb’ button, which I find on the UI after only four minutes of searching. And… 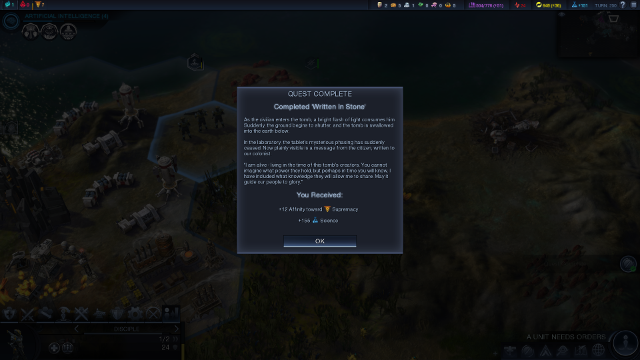 Wait, hold on. What?

No, game, don’t you… don’t gloss over this! Don’t give me that ‘here’s some Science and a few Supremacy points, good job’ nonsense. Look at what you yourself wrote there, just now! This man traveled back in time! To live with an advanced alien civilization. Jesus Christ on a pogo stick, this is… this is big. This is bigger than big. This is incontrovertible proof of the existence of sapient alien races, at least at some point in the past. And we’ve just seen actual time travel! Actual time travel! This… this should by rights chance everything. And then change it again. And then again! All our current models and axioms of space-time will need to be re-thought! And the philosophical impact alone of…

…no? We’re not actually doing this? I’m honestly getting sent off with a ‘ha ha, cool’ and a paltry reward of beakers and robot points?

Yup, looks like it. Wow. I’m enjoying Beyond Earth a lot, but this game has some strange writing sometimes. I’m genuinely curious what kind of jaded recluse would write a story involving aliens, time travel and predestination paradoxes, and then have everyone involved just shrug it off like nothing happened?

I weep for the lack of wonder in your world, writer.

Next episode: A new fashion season starts on Terra Atlantea!