(Hey everyone! As mentioned in this earlier news post, what you’re seeing right here is the first episode of Thanatos Plays Dragon Age. In it, Ninja Blues-friend Thanatos takes us on a journey through Thedas as viewed by a Dalish City Elf. The gist of it, as he pitched it us, is more or less ‘did you know Elves are the black people of Thedas?’ Dunno about you, but that piqued my interest. So yeah, here you go: read at your own enjoyment, and be sure to let Thanatos know what you think in the comments below. — Jarenth.)

The story goes thusly: Dragon Age: Origins is kind of an awesome game that most, if not all, of you have probably already played. Published by Bioware in the November Chaos of 2009, back when I was actually *still in the military*. For me, Dragon Age is notable for two distinct elements:
One, it is a fantasy setting where I do not reflexively hate Mages, as magic is pretty consistently presented as more of a genetic curse than it is a blessing anybody can achieve though rigorous study. And two, it made Elves something *other* than pointy-eared Mary Sues living in Treetop Villa of Being Super-Awesome while they arrogantly pass judgment on all the lesser races.

We’re not going to be playing a Mage, because I have this unhealthy obsession with always being the party Rogue. Seriously, ask anybody I’ve ever played a tabletop game with. A locked door is a mystery that cannot stand. An exposed back must be stabbed!

Since we’re not a fan of snooty, nose-in-the-air Nature Elves, we’re going to ignore that Origin, though *that* is mostly due to our complete inability to burn the whole thing to ashes. Instead, we’re going to go with the Most Interesting Origin: 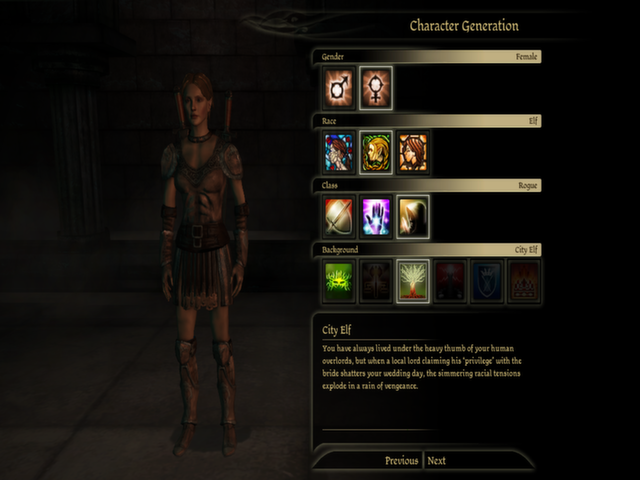 As a former-military brat, and being former military myself, I’ve lived more or less my entire life in heavy, urban, and coastal (or slightly-inland) areas, so the whole Urban ‘City’ Elf angle is one that resonates immediately.

Plus, and I feel like this is a thing I should mention, I’ve played this game a couple of times before. Racism is alive and well in the Dragon Age setting (helpfully and *actually* named ‘Thedas’ by the good folks at Bioware), and playing as an Elf not only gives us a great view of the classic nobody-becomes-a-hero story arc, but it also gives us the best view of the most prominent bit of racial politics.

We’re getting ahead of ourselves, though. Here, have the opening cinematic: the only bit of all of this information I had when I started the game for the first time:

It is from here that we’re thrown into the weird and wild and wonderful mess that is Dragon Age: Origins’ Character Creation screen. You already saw the first bit above, and below, we’ll continue our foray into information overload: 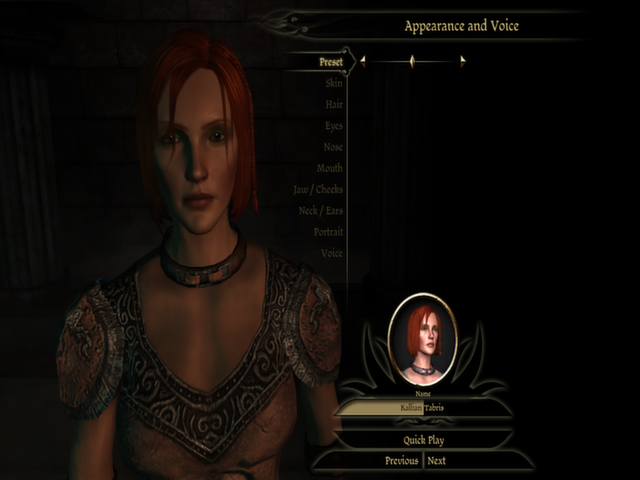 This screenshot put here to point out that Leliana has a default Elf face. I think she’s lying about being a shem, guys.

Now, unlike a lot of other people in the community, I personally don’t like messing around with appearance sliders too much, as I invariably end up with a Player Character with the approximate general appearance of a poorly-skinned potato. Mostly, I just fiddle around with eye colour, hair colour, and hair style, until I get something vaguely passable: 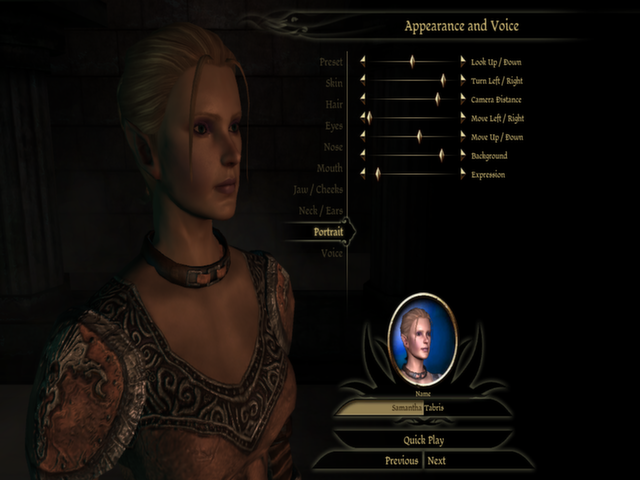 Although, in this case, I also made her ears tiny and messed with the default portrait.

From there, we’re kicked into the Min-Maxer’s Delight: Point-buy stat distribution. I’m not even going to pretend I know how to optimally game my statistic distribution in Dragon Age. 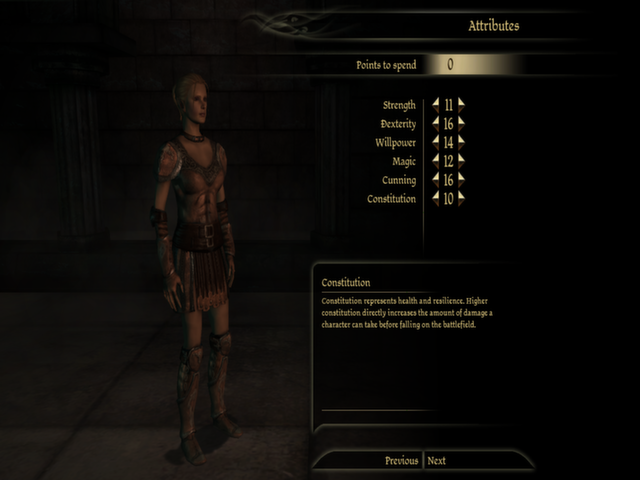 As shown here, wherein I dump two points into Cunning and Dexterity and then one into *Strength*, because better armor requires strength.

And then, through the magic of having played this game before, I make a couple of choices I would not (and did not) actually make in my first play-through.
Choice one is that, instead of immediately maxing Persuasion or picking up Pickpocket… er… ‘Stealing’, I chose to go the distinctly non-Rogueish route of selecting Combat Training. 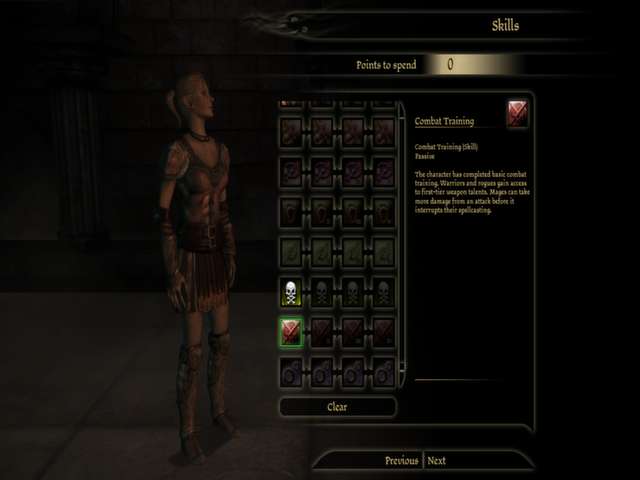 I have an overwhelming desire to not be positively useless in the early game, okay?

Also, instead of learning the Stealth ability somehow faster than human reflexes should allow me to click on the box, I ignore it entirely.

As Ninjustin and Jarenth would both tell you, I’m a huge fan of stealth games and stealth gameplay. If there’s a stealth option, I take it. Sure, part of the appeal of playing as a Rogue is to be a DPS Master, but the Stealth ability is a defining characteristic of the Roguish classes.

Which is why I’m upset that, in Dragon Age: Origins, it absolutely sucks. In game, Stealth is useful for two things only: providing a small bonus to your Stealing checks, and wiping out aggro in the middle of a fight. That second one seems useful, yeah, especially as a squishy murderbot. But the thing is, you can only activate Stealth in the middle of combat at the *maximum level* of having Stealth, which isn’t going to happen until the end game.

Or at all, really.

I only plan on dropping any points into stealth if I, for some reason, am swimming in points I don’t have another use for or if I really need that tiny boost in Denerim. 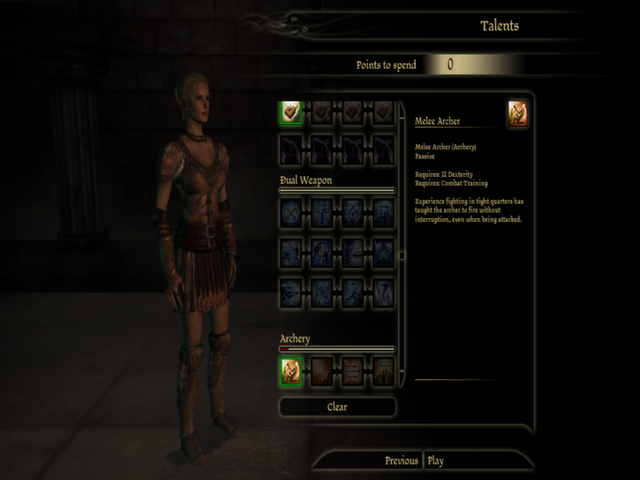 So let’s go with Lockpicking and ‘shooting dudes in the face while they’re stabbing me’ instead.

From there, we hit the ‘Play’ button and… 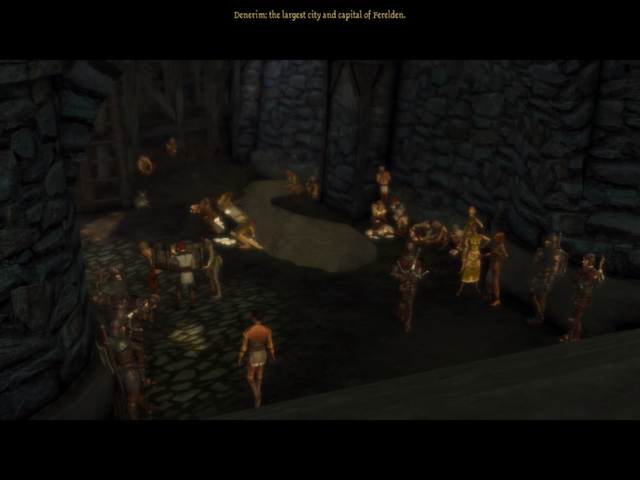 We’re immediately treated to another cutscene.

The game establishes the scene of the Origin. One of the selling points of DA:O so big they put it in the title is the ability to select the origin of your player character, and that’s actually pretty gravy. There’s six different ones to choose from (seven, if you count the slight difference between female and male City Elf origins), which means six different scenes need to be set.

Remember how I said Elves and Humans have the best racial dynamic in Thedas? Well: 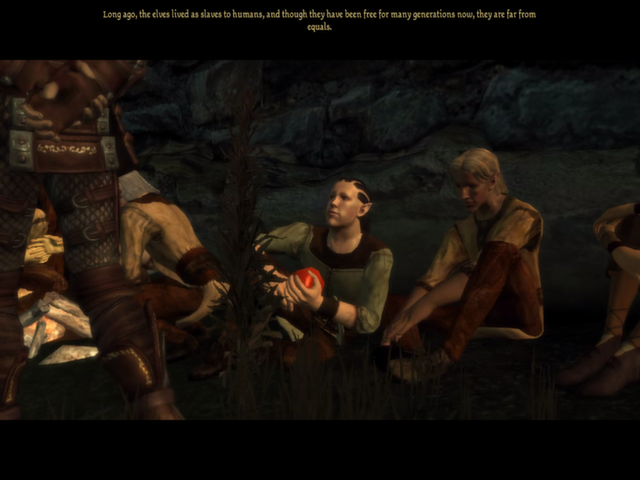 There it is, described in one handy subtitled screenshot.

These are Elves. To put it bluntly, Elves are the black people of Thedas. Worse, even as they’re still in what is, effectively, the Jim Crow era, but somehow worse. The general gist of the now-set scene is thus: You’re a black guy Elf, and you’ve spent your entire life in the ghetto Alienage of the nation’s largest city (Which is, not coincidentally, also the capital city). Yours is a strong and proud, if perpetually oppressed people with a rich and unique culture, and this is the only life you’ve ever known. 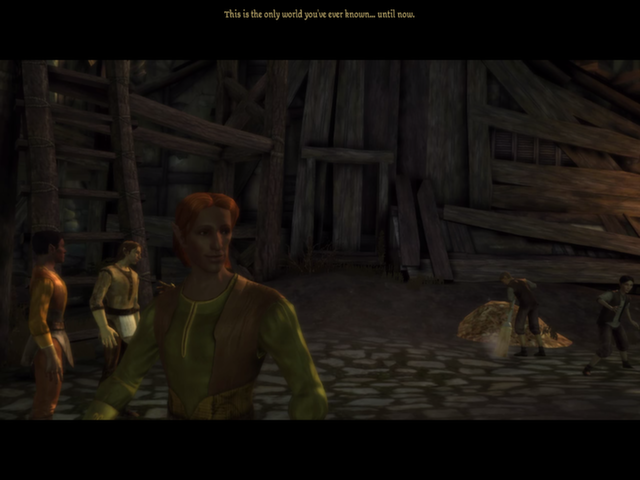 Big Book O’ Fantasy Cliches: ‘only world the hero has ever known… until now’. Check!

So, we’re pretty much expecting the whole place to burn down now, no? To inspire Lady Rogue-tagonist to strike out on her own and… No. Wait. That’s the *Human* origin. We’re going for more of a slave revolt thing, just to keep the ‘Elves are black people’ metaphor going strong. 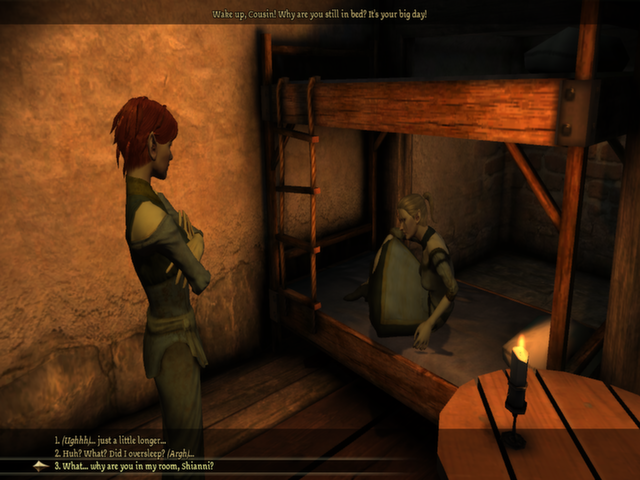 Big Book O’ Fantasy Cliches: ‘the Protagonist is woken up by a family member’. Check!

It’s our Protagonist’s (her name is ‘Samantha’, by the way) wedding day! Joy of joys! Of course, we as the player don’t know that yet. 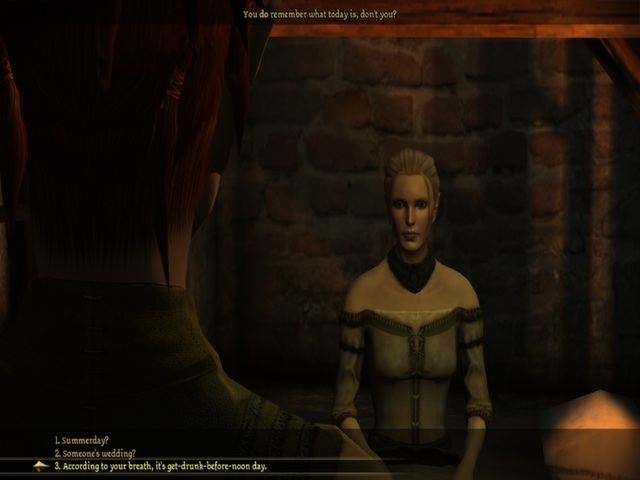 So I’m not going to pass up the chance to be snarky.

Join us next week, when Not-Niko gets offended. Also: The plot moves forward!